Sebastiano Esposito: Why Anderlecht have loaned in the young Azzurri forward to help with their title bid – scout report

It’s a new dawn for RSC Anderlecht, as the Brussels-based club, and arguably the biggest club in the history of Belgian football, hit the reset button at the end of last season. Vincent Kompany parted ways with the club to start a new managerial journey in England with Burnley, with Felice Mazzu replacing him after a tremendous season in charge of Royale Union Saint-Gilloise.

Squad turnover has also impacted Anderlecht this offseason. After a tremendous 2021/22 season, where he had 15 goals and 8 assists in the Belgian Pro League, Joshua Zirkzee has returned to parent club Bayern Munich, with it looking unlikely that Anderlecht can sign him permanently. The future of last season’s strike partner Christian Kouamé is also uncertain. To try and replace the production, Anderlecht have turned to Inter Milan in Serie A, with the club close to bringing in forward Sebastiano Esposito on loan with an option to buy. This tactical analysis and scout report will analyse Esposito’s strengths; as well as what he brings to this new look Anderlecht side under Felice Mazzu.

Throughout much of Esposito’s senior footballing career so far, he has been deployed as the central striker. However, his position when he was on loan last season at FC Basel in Switzerland was constantly being alternated. 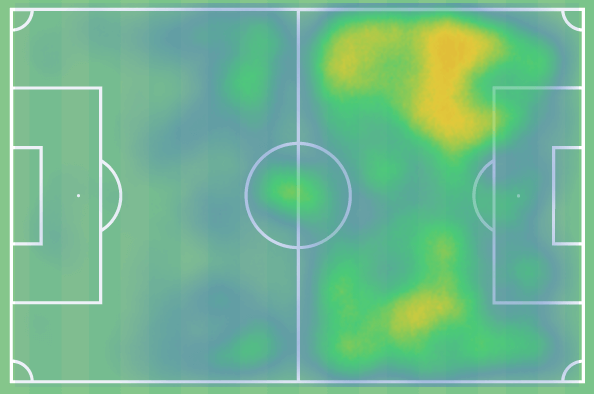 The heat map above shows the positions that Esposito liked to operate in during his loan spell last season. Last season, FC Basel typically set up in a 4-2-3-1 formation, with Esposito switching between playing as the central striker, the central attacking midfielder, and the left-sided attacking midfielder. He usually operated on the left-hand side last season, and this positional versatility was a big boost for him. From these wide positions, he was able to offer Basel a different attacking impetus, as well as good experience for the still very young forward.

At Anderlecht, he will likely play as the central striker, but his ability to drift into wider positions and impact attacking play from there will allow much-needed versatility for Felice Mazzu next season.

Able to make an impact from a wide position

As was just previously discussed, when operating from a wide position for FC Basel last season, Sebastiano Esposito was able to make an impact. Whether that was from dribbling, crossing, or just picking out teammates in space with perfectly weighted passes, Esposito was impactful. When looking at some metrics that are impacted by operating from a wider position, it is easy to illustrate the impact he made. 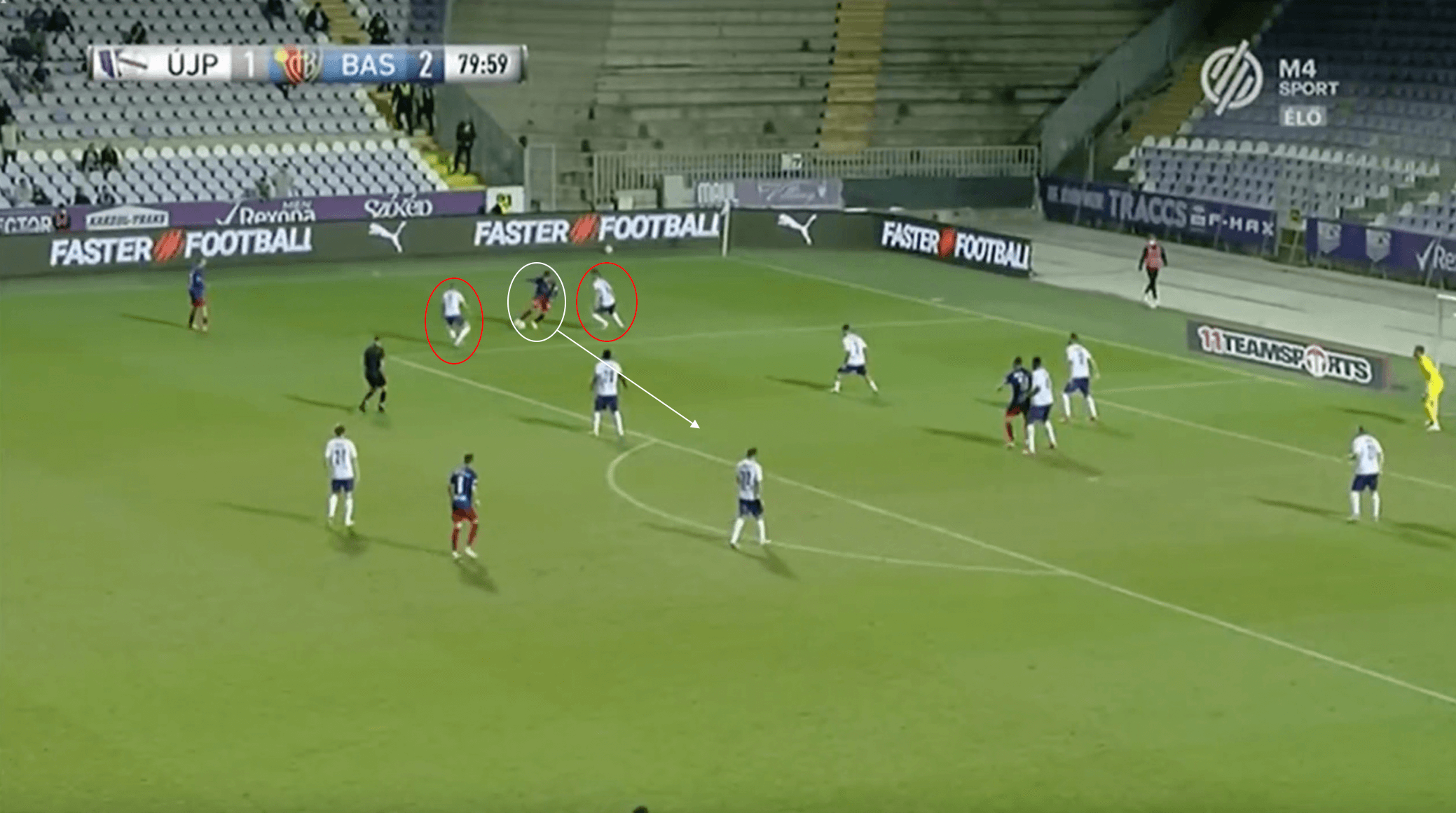 In the phase of play above, Esposito is playing as the left-sided attacking midfielder and is in possession near the far touchline. Two opposition defenders are quick to close him down, but he is able to dribble past them into the space near the centre of the penalty box. He is then able to get a shot off, which goes just wide of the far post. This example portrays what Esposito is capable of with the ball at his feet from a wider position. 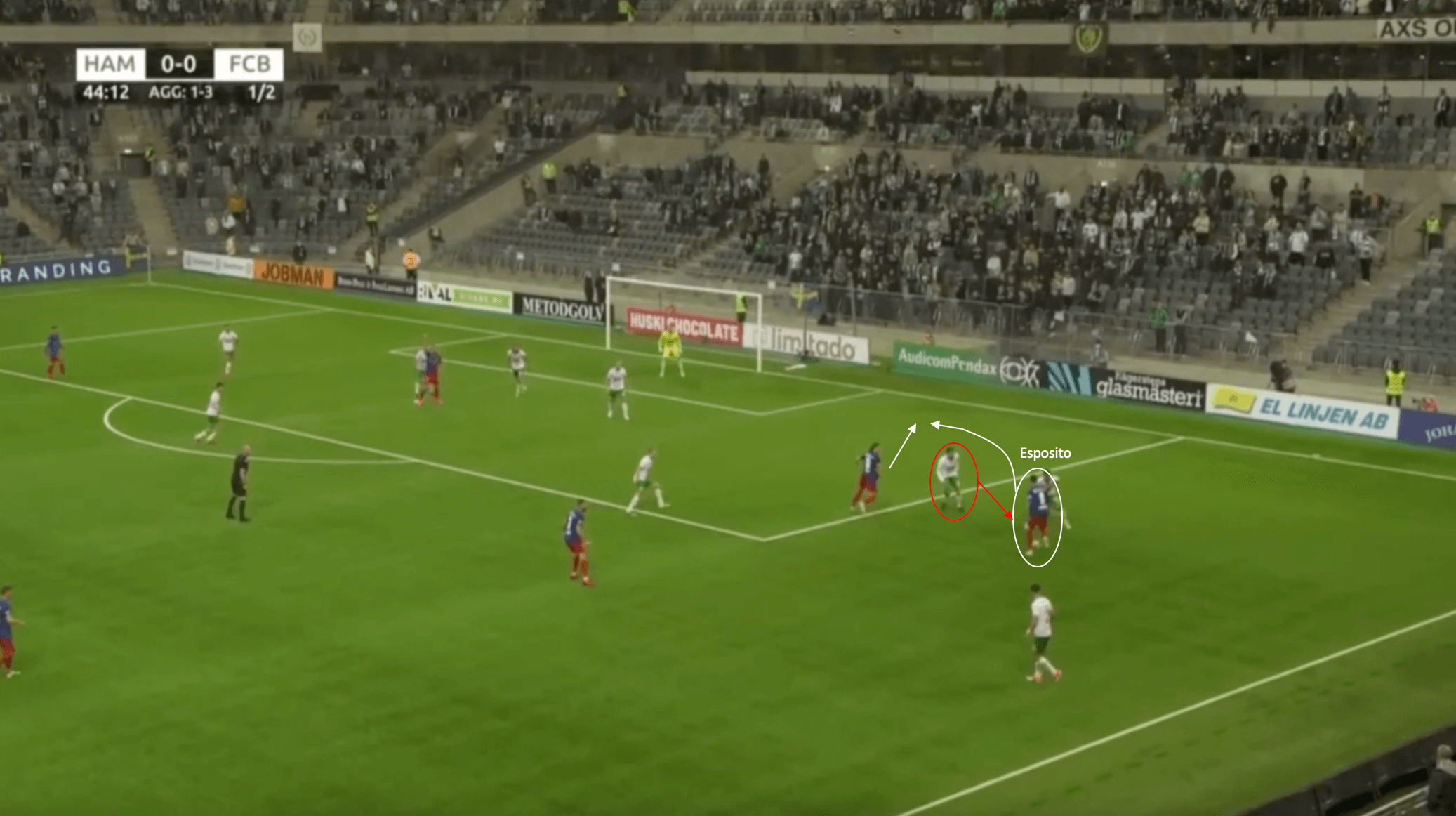 Another example of the impact that Sebastiano Esposito is able to make from a wide position is shown above. Operating from the right-sided midfielder position this time, Esposito attracts the attention of two opposition defenders. This allows the striker to make an unmarked run in behind, which Esposito is able to find with a chipped pass over the defender. Unfortunately, the striker’s shot goes off the post, but this does not take away from the composure that Esposito has from this wider position while being closed down by two defenders. 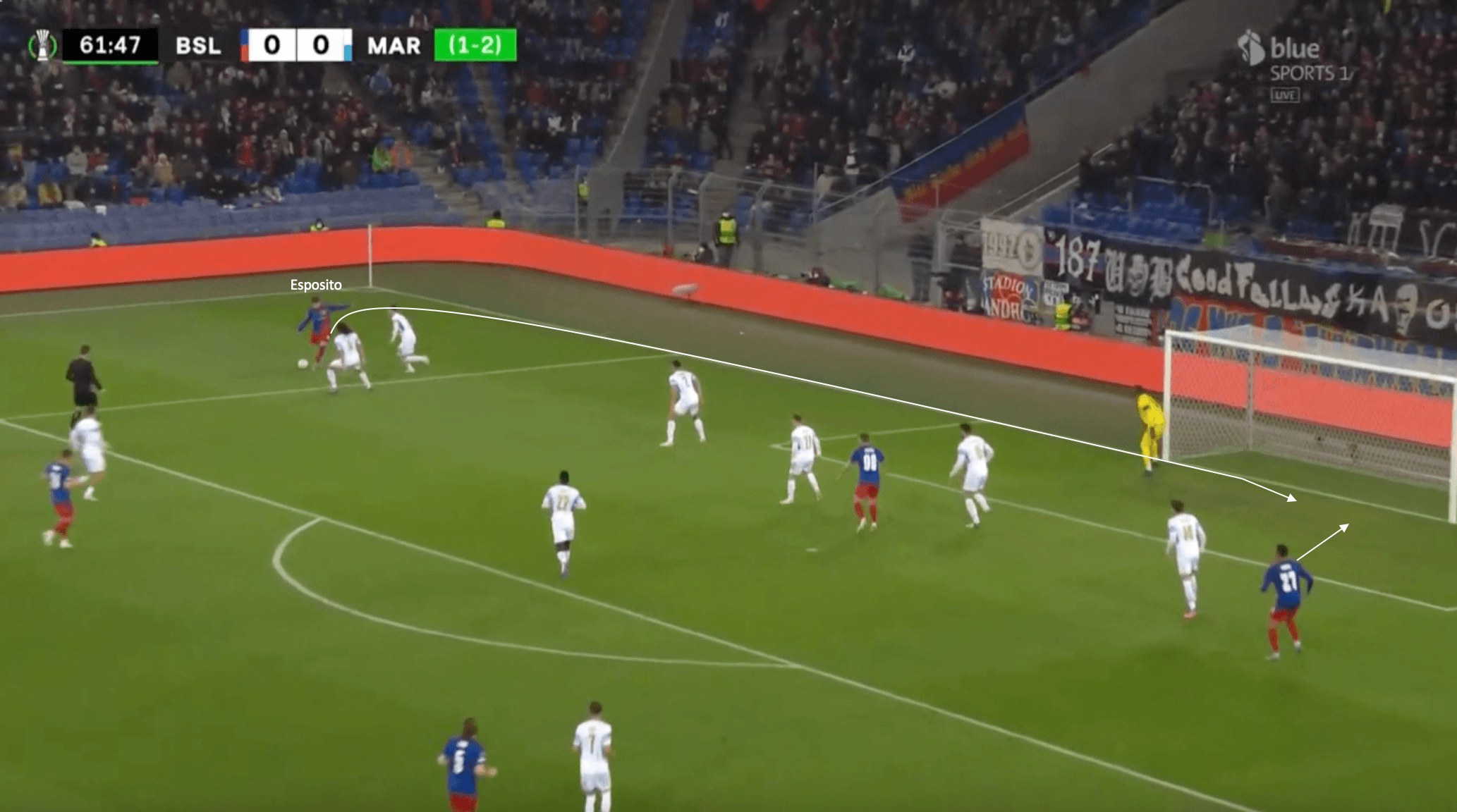 As mentioned in the introduction to this section, Esposito’s crossing ability is also something that should not be overlooked when it comes to the impact that he makes from wide positions. In the phase above against Marseille, Esposito is being closed down by two Marseille players. Staying calm and composed, he sends a perfectly weighted cross over the top of the entire Marseille back line, with the ball falling to the Basel player at the far post for an easy tap-in.

At Anderlecht, while Esposito will likely be deployed as a central striker, there is the potential for Felice Mazzu to opt to use him in a wider position. Esposito is not the most potent scorer in front of goal, so shifting to a wider position may enable him more freedom to be involved in the attacking play; which as a result may also lead Esposito to score more goals as well.

An interesting strength of Sebastiano Esposito is his ability from set-pieces. Out of the six goals he scored for Basel last season, three were from free-kicks, while he also is able to send great balls into the box for teammates from set-pieces. This capability will be a welcome addition to Felice Mazzu at Anderlecht next season, with a set-piece specialist, something that every good side wants to have. 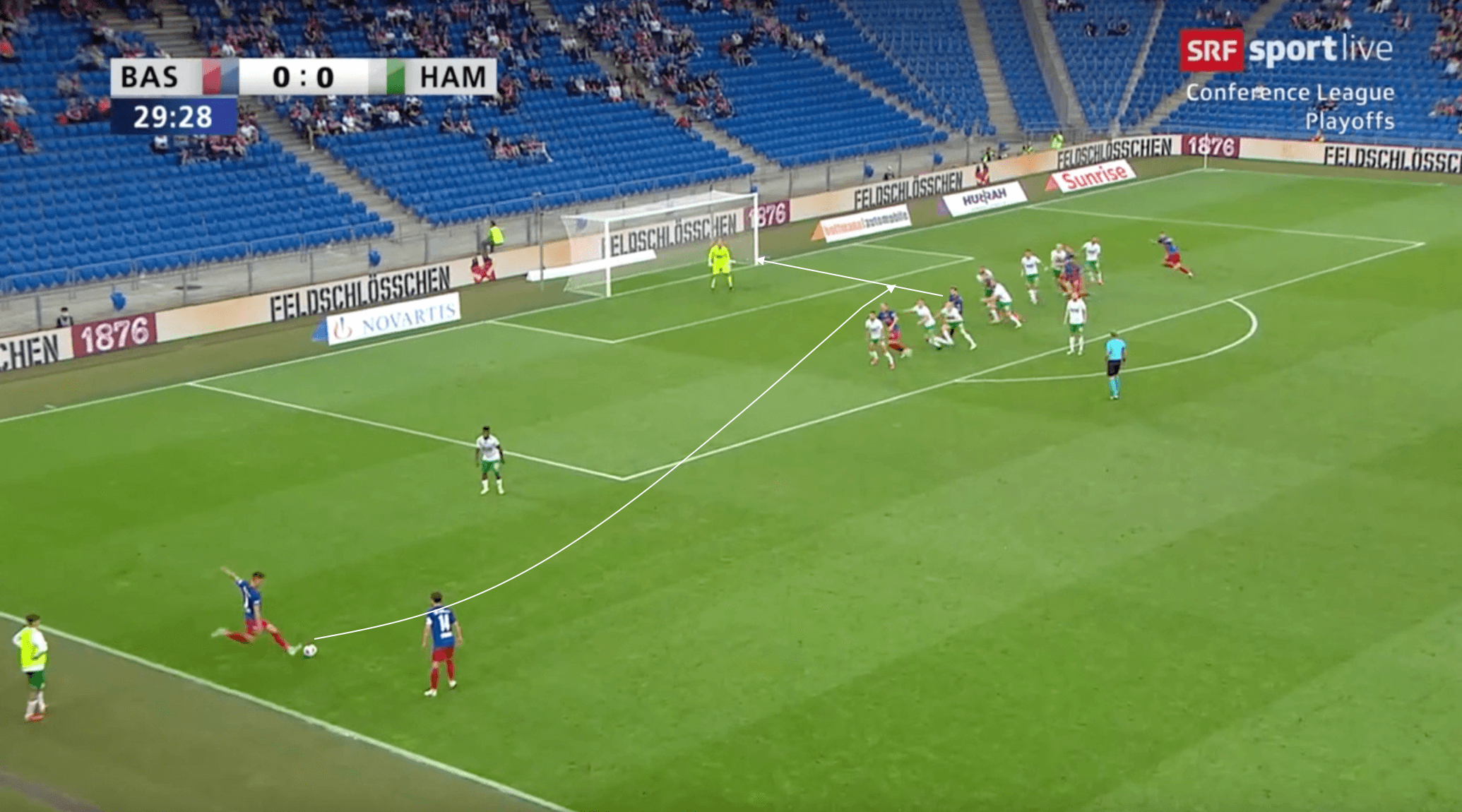 The above screenshot shows an example of the ability that Sebastiano Esposito has when taking set-pieces. This Basel free-kick is from a very wide position, but Esposito is able to play a perfectly floated ball towards the penalty spot. This allows the forward to get his head on the ball and send it past the goalkeeper and into the back of the net. The ball into the box was extraordinary from Esposito, with the forward only needing to get a slight touch with his head to redirect the ball goalward. 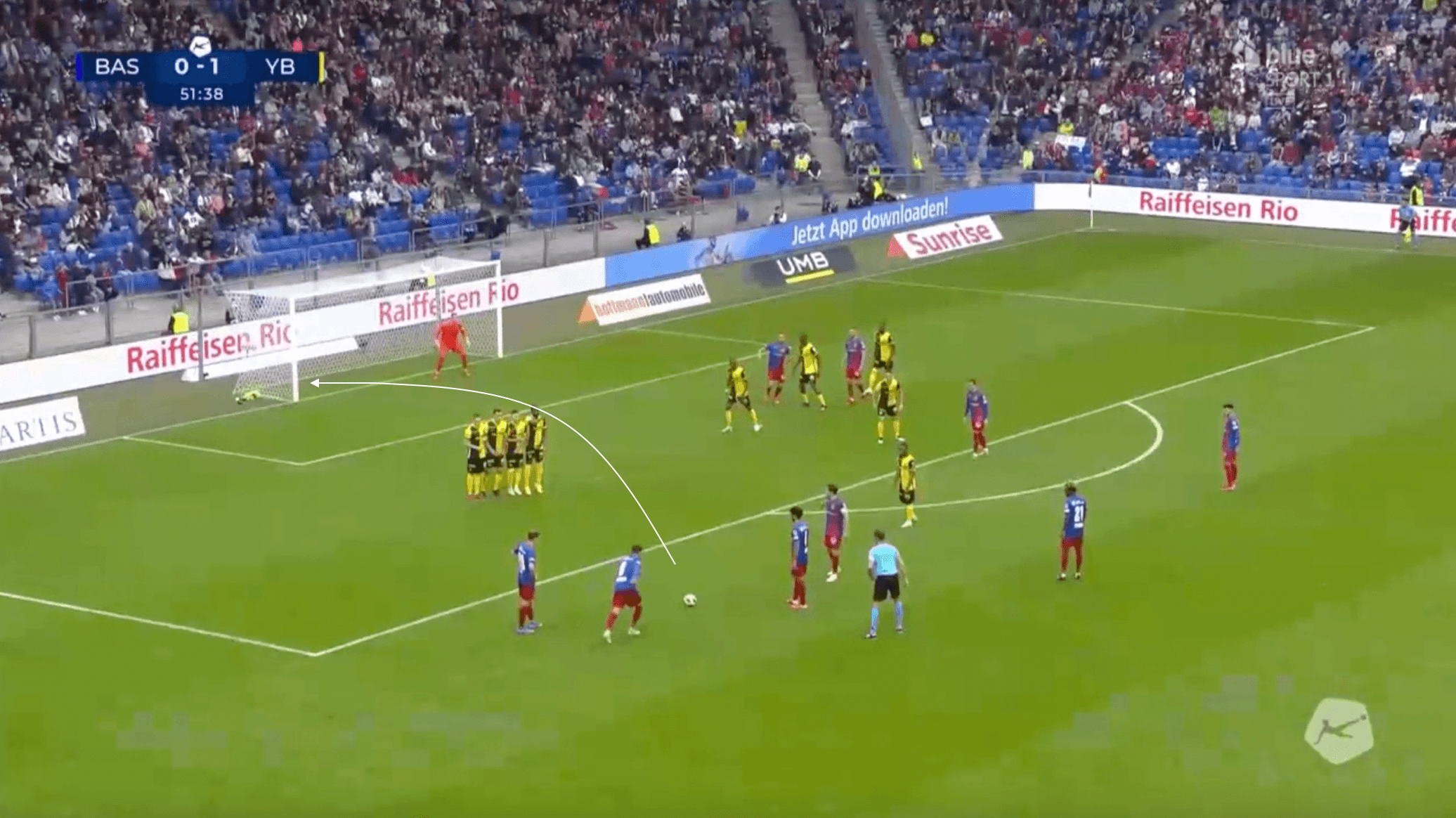 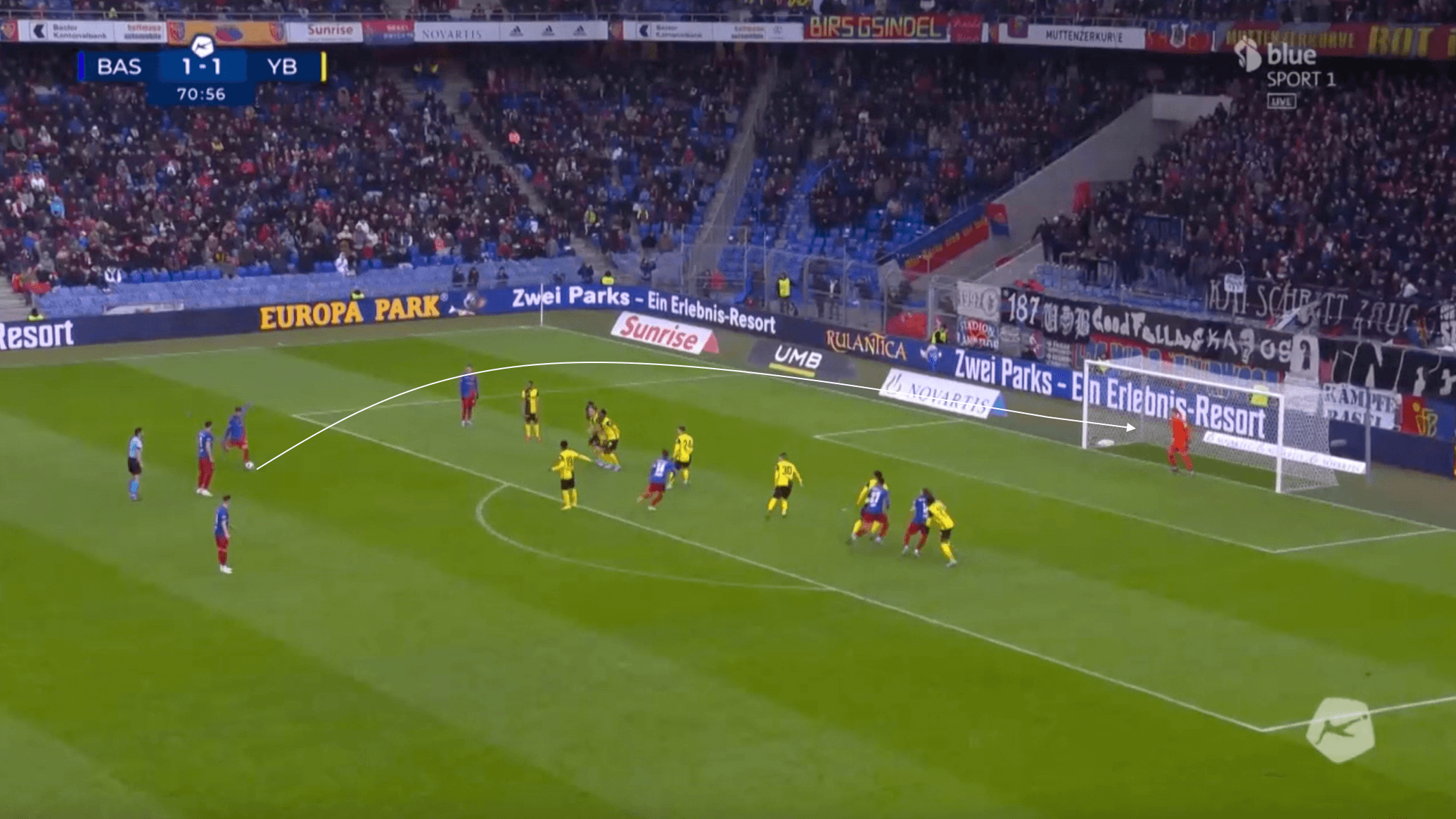 Another example of Sebastiano Esposito’s quality from set-pieces is shown in the example above. Esposito once again is able to go directly for goal, and even though the free-kick was close to the edge of the penalty area, he was still able to get the ball up and over the wall. The ball then flies in at the near post once again, with the goalkeeper slow to react to the incoming attempt.

Scoring goals from set-pieces is something that every side in world football wants to be able to do, and next season Anderlecht will be able to have a player who has the quality to score directly from free-kicks, as well as send great balls into dangerous areas in the box from these set pieces.

A final strength of Sebastiano Esposito that will be looked at is his work rate, and willingness to track back and help in defensive phases of play. This includes dropping back to the middle or defensive third of the pitch to attempt to dispossess the opposition player in possession; or just his capability to be successful in defensive duels. Last season, Esposito attempted 6.98 defensive duels per 90, with a success rate of 60%. Sebastiano Esposito is not afraid to attempt to win back possession from the opposition, with him acting as the first line of defence when possession is turned over. 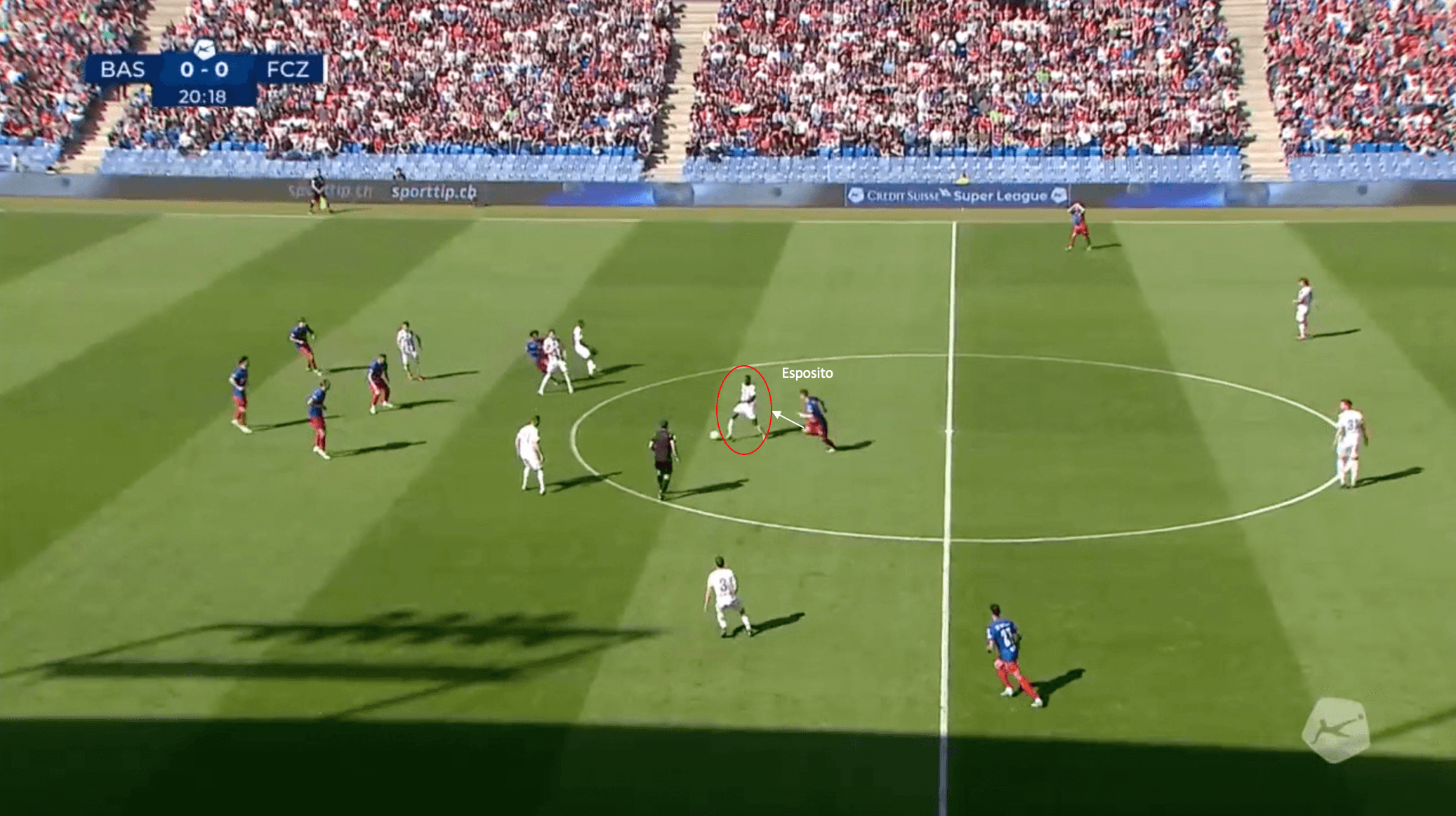 The image above shows an example of the ability Sebastiano Esposito has to track back and win back possession in the defensive third of the pitch. Playing as the central striker against FC Zürich, Esposito sees an opportunity and runs back to help out defensively. He puts pressure on the opposition midfielder, which allows him to eventually put his foot out and tackle the player cleanly, winning back possession for Basel and starting a counterattack.

This example shows the willingness that Esposito has to track back and help out in the defensive phases of the game too; as opposed to just staying further forward and pinning the opposition’s defensive line back. 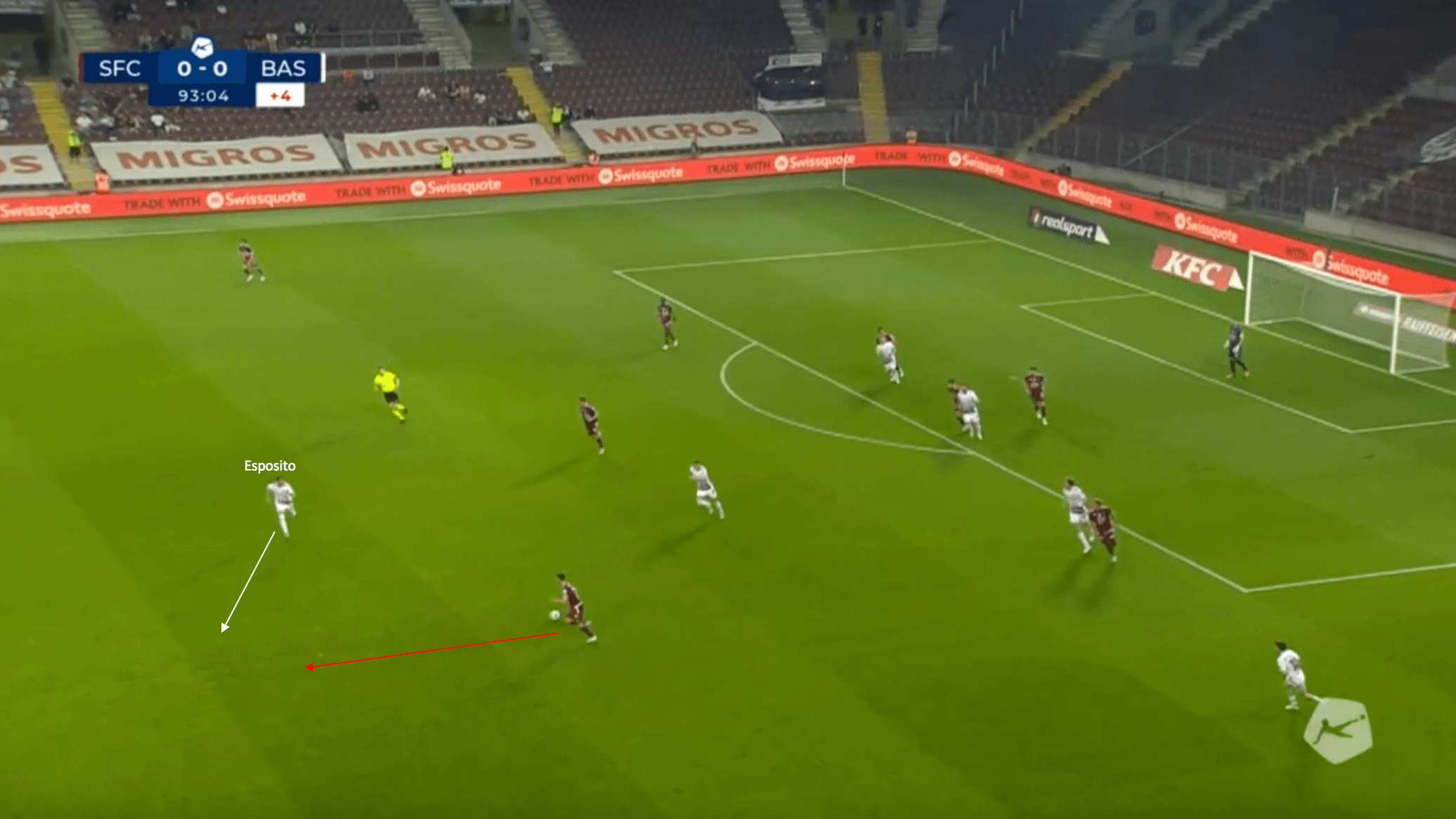 Esposito’s ability in defensive duels also means that he is very good at stopping opponents from breaking on counterattacks. In the phase above, the opposition have won back possession and are looking to start a counterattack.

Having already dropped back into midfield, Esposito is the closest Basel player who can stop the counterattack, which he is able to do. He is able to cut off the run of the player in possession, going shoulder to shoulder and winning back possession for Basel near midfield. Because of the defensive abilities of Sebastiano Esposito, a possible last-minute opposition scoring chance was thwarted. 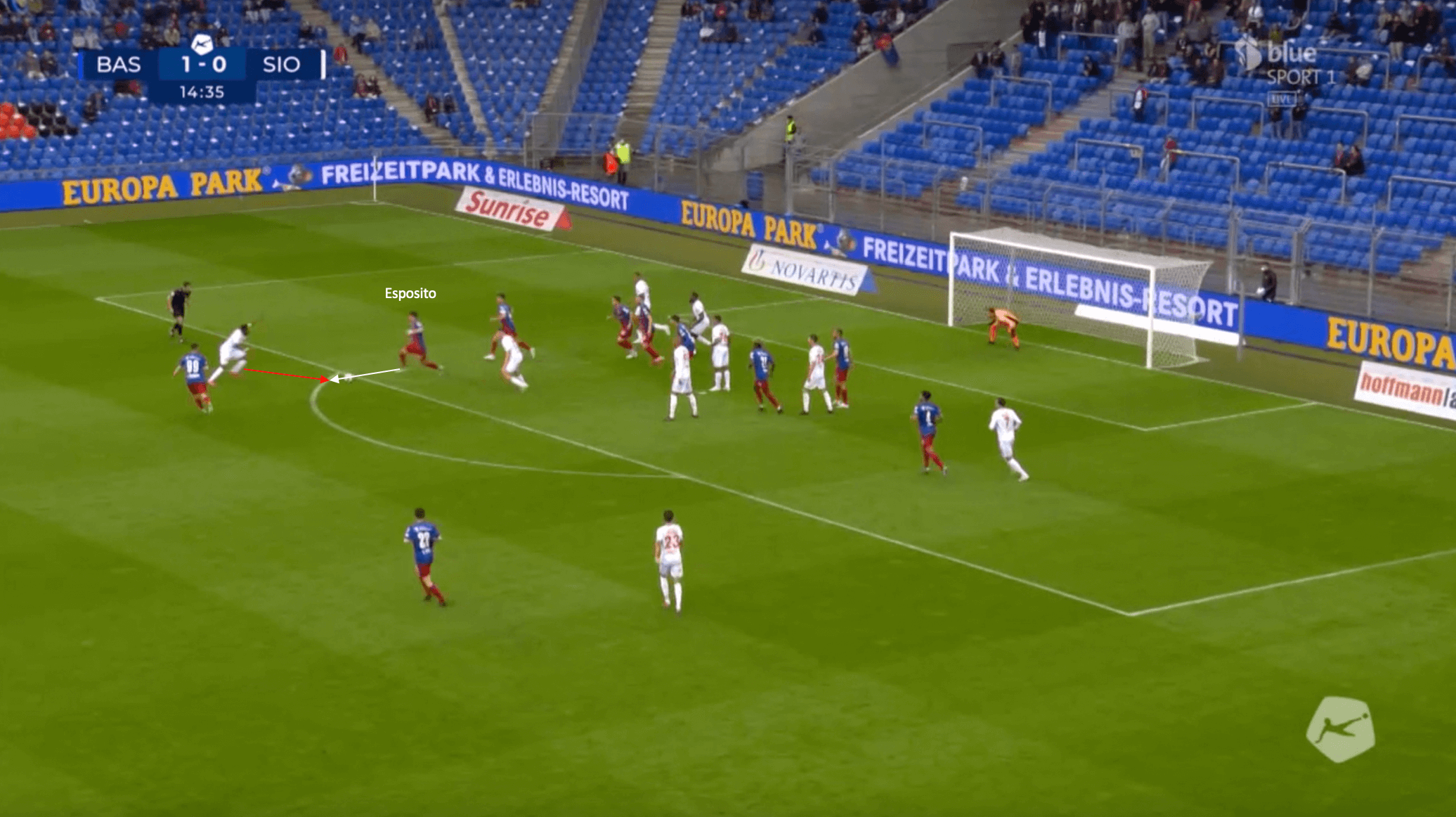 The final example for this section shows that even when it comes to engaging in 50/50 duels inside his team’s own penalty box, Esposito will do it. After an opposition corner kick, the ball falls free to the edge of the area with the opposition player near the edge of the box looking to get on the loose ball. However, noticing the danger, Esposito is the first of his teammates to react to this possible threat. He gets out of his defensive shape and goes into a 50/50 challenge with the opponent. As a result, Esposito wins possession, which allows FC Basel to break off on a quick counterattack.

While he is a forward player by nature, Esposito has the defensive capabilities and mindset of a midfield player. This will be a welcome addition for Mazzu and his Anderlecht side, with Esposito possessing a never-ending work rate when it comes to the defensive phases of play.

While FC Basel had an option to buy at the end of Sebastiano Esposito’s loan spell with them, the Swiss club opted against triggering that option. Instead, Inter have decided to loan him out once again, this time to Belgian giants RSC Anderlecht.

As this tactics and analysis piece has shown, Sebastiano Esposito is a very talented attacking player, and while he still needs to become a more consistent goal scorer at senior level, the sky is the limit for the young Italian forward.