Bournemouth continued their unbeaten start to the EFL Championship season with a 1-0 victory over Bristol City. It was a tight, well-contested clash between two teams who have made an excellent start to the campaign.

Bristol City had the better of the first half, as they turned the ball over in good areas to create a few good chances. However, Bournemouth dominated the second period and they found the winner with nine minutes to go. Substitute Arnaut Danjuma scored a delightful lob just six minutes after he came on as a substitute.

This tactical analysis will take a deep dive into the tactics used by Jason Tindall and Dean Holden, two bosses who are enjoying their first season in management. 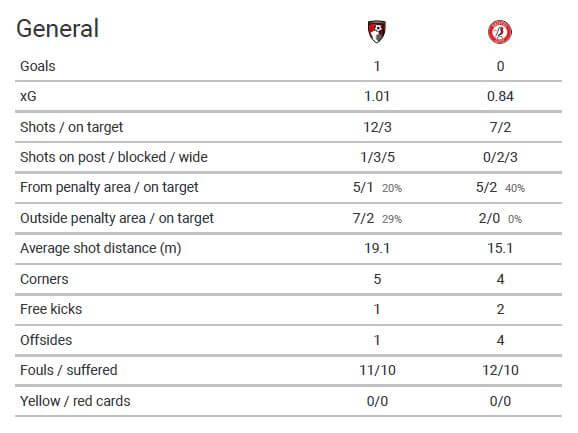 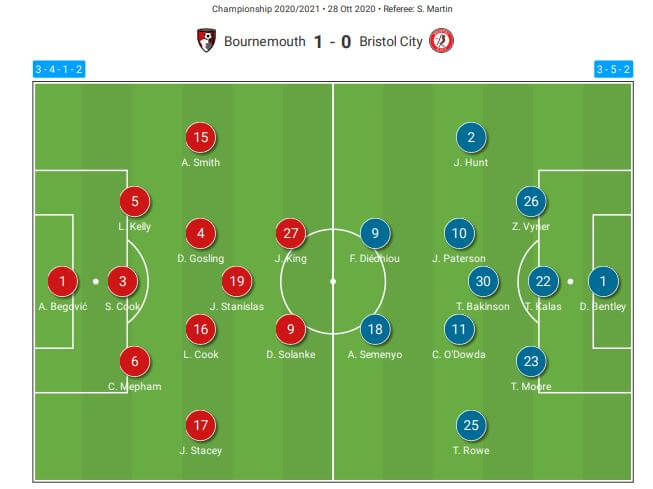 The Robins did manage to create some good chances in the first half, and their pressing caused problems for Bournemouth. They focused on putting aggressive pressure on Bournemouth players in wide areas, particularly down the Cherries’ right. When they had possession near the touchline, the away side overloaded the channel to cut off all the passing options. This often forced play backwards, and they were able to force turnovers. In the image below, six Bristol City players are pressing aggressively out on their left side when Bournemouth have possession. 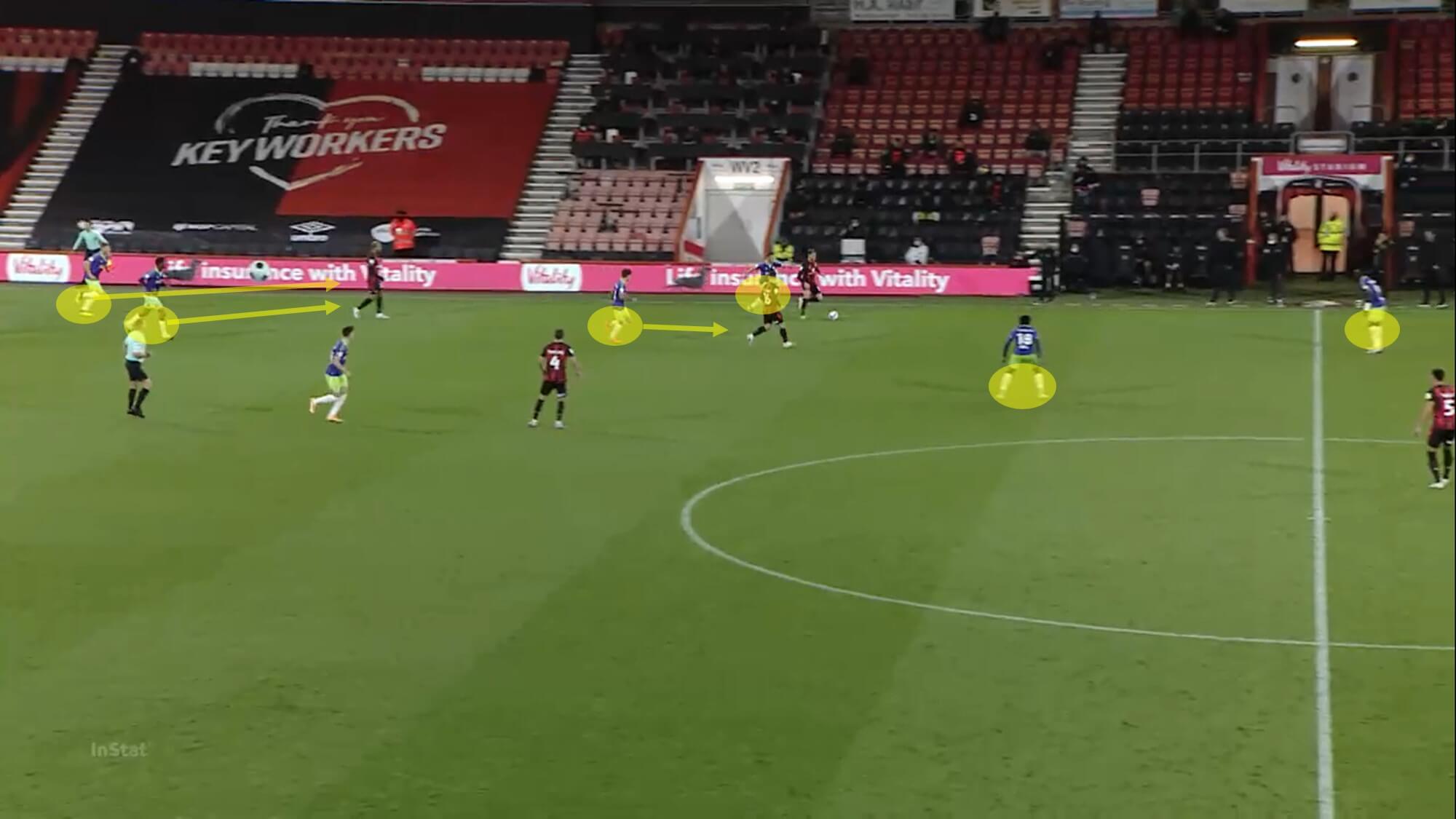 Jack Stacey, the man in possession, is being harried by Tommy Rowe. The Bristol City wing-back is forcing him backwards by pressing him aggressively. His two closest passing options Cook and King are also both marked. Therefore, he tries to play the ball back to keep the ball for his team. However, City’s front two have also blocked off backwards passing lanes by shifting over to the left side of the pitch. So when he attempts to play the pass, Semenyo is in a great position to intercept the ball and win it back in a good area for the Robins, who can launch a quick counter-attack.

Dean Holden’s keenness to allow play to go out wide and then collapse around the ball is a perfectly understandable strategy. In wide areas, the opposition have less space to play around you because of their proximity to the touchline. Therefore, if you press in those areas you can use the touchline as an extra defender because the opposition could easily pass the ball out of play under pressure. It’s more difficult to press aggressively in central areas, because the opponents have the option of working the ball to either side of your lines of pressure.

Of course, this strategy didn’t come without its risks, and Bournemouth managed to exploit it. We’ll touch on how they managed to switch play more effectively after the interval later on in the analysis. Throughout the encounter, the Cherries looked to make the pitch as big as possible when they had the ball. This included the two central midfielders splitting when they had the ball, so they were able to quickly switch the point of attack with a simple pass. 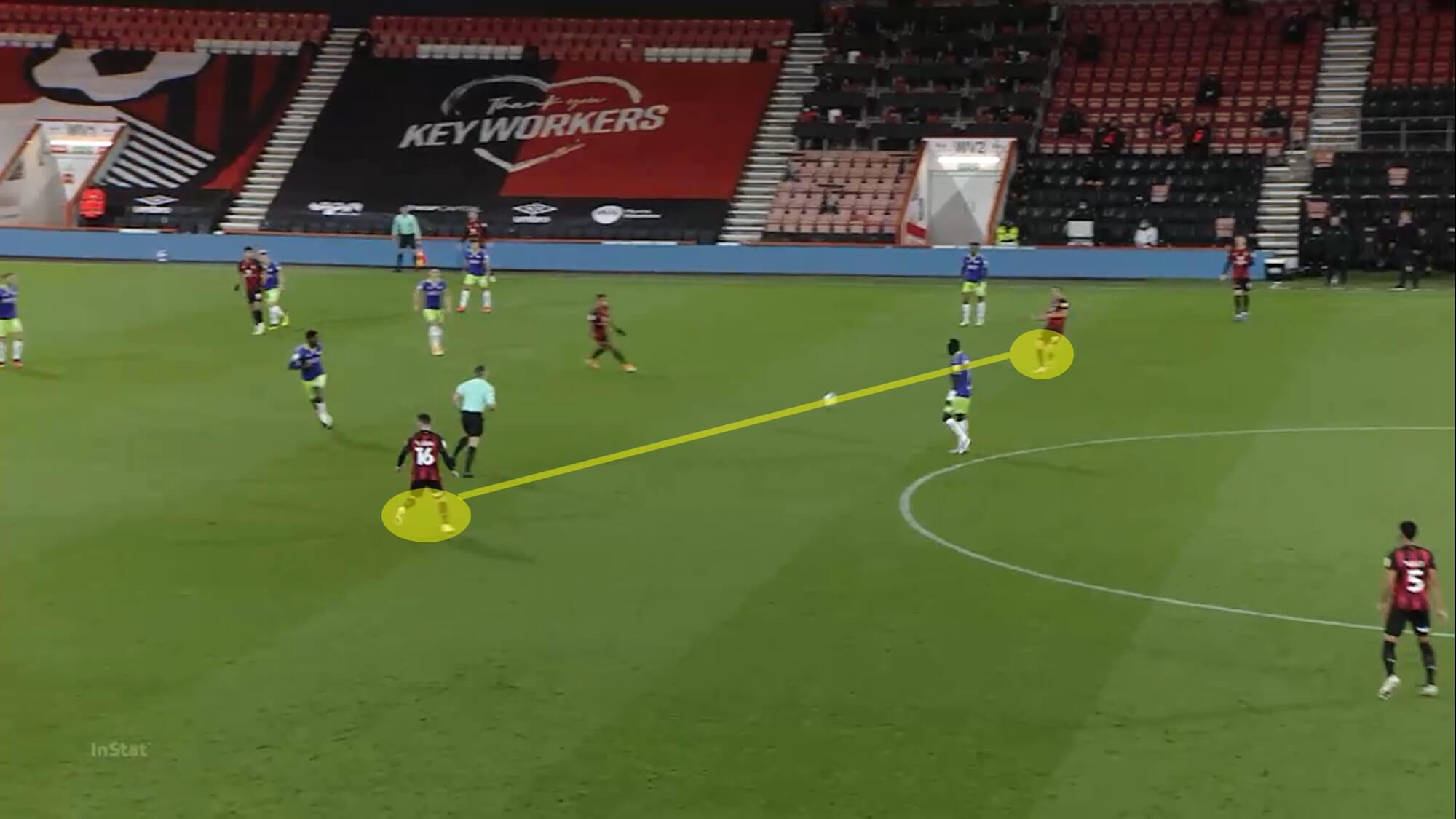 As you can see in the image above, Bristol City have crowded out Bournemouth’s right flank. Dan Gosling is about to play a pass to his central midfield partner Lewis Cook, who is a fair distance to the side of him. This means he’s away from the crowded side of the pitch and can switch the play o the less crowded side with a simple ball. As Cook is about to receive the pass, you can see him scan to the left as he wants to immediately pass the ball out to wing-back Adam Smith, who has retained a wide position. Due to the fact he scans his shoulder, you can tell he has a desire to move the ball out wide before he receives it.

Cook plays the pass, but Bristol City got back into their shape quickly. Because they played a back five, it means the wing-back can really push out wide without leaving the rest of the defence exposed because there are three centre-backs. 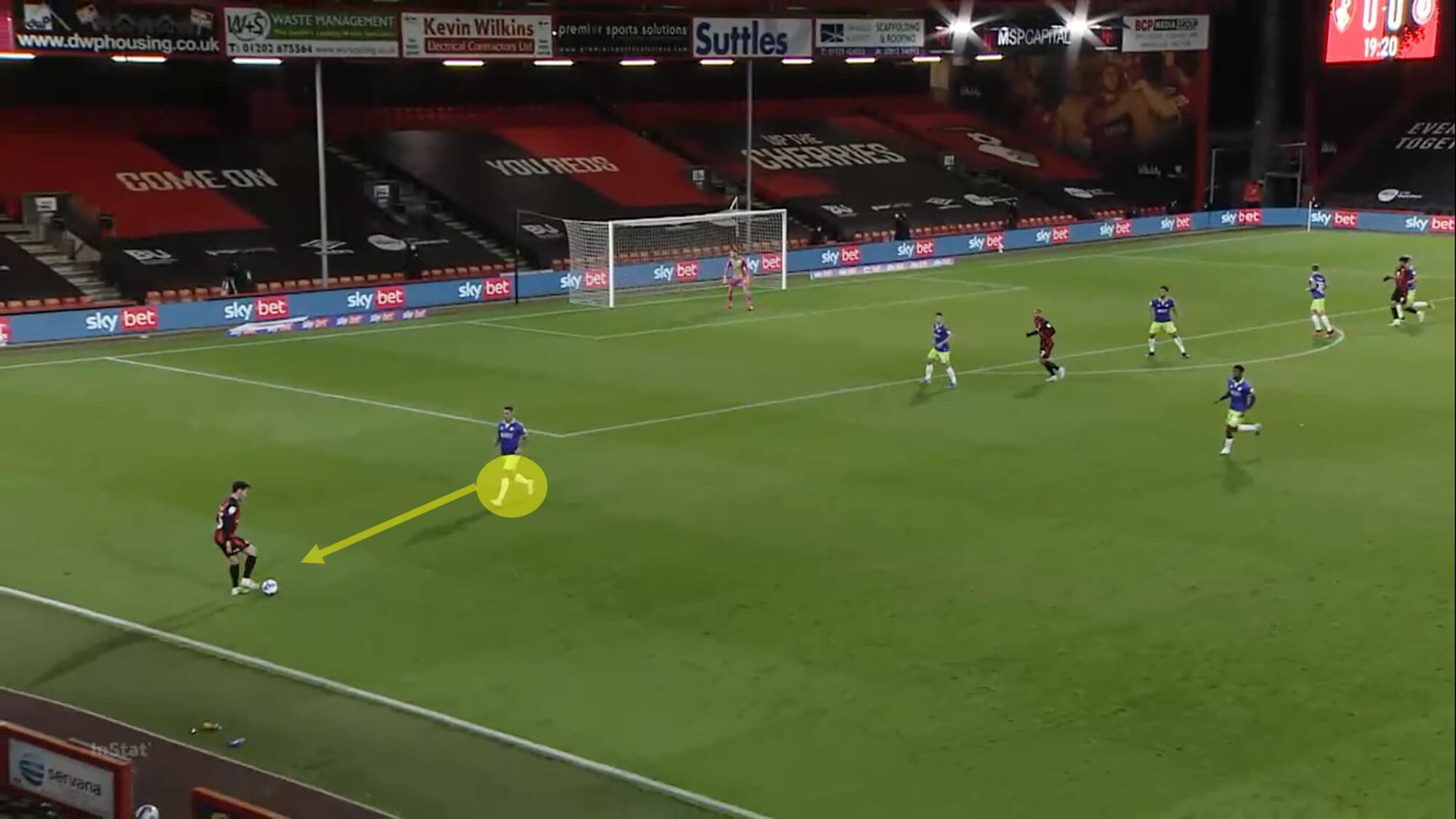 Generally, when Bournemouth had possession at the back, Bristol City didn’t go gung-ho in their pressing. Doing so would have been difficult, mainly due to the fact Bournemouth were playing a back three and Bristol City were playing a front two. This means that in the build-up phase, it’s difficult for the strikers to press effectively because they’re outnumbered. The Cherries exacerbated that difficulty by getting their wide central defenders to push out into full-back positions. Because of that, the Robins’ front two had longer distances to press. 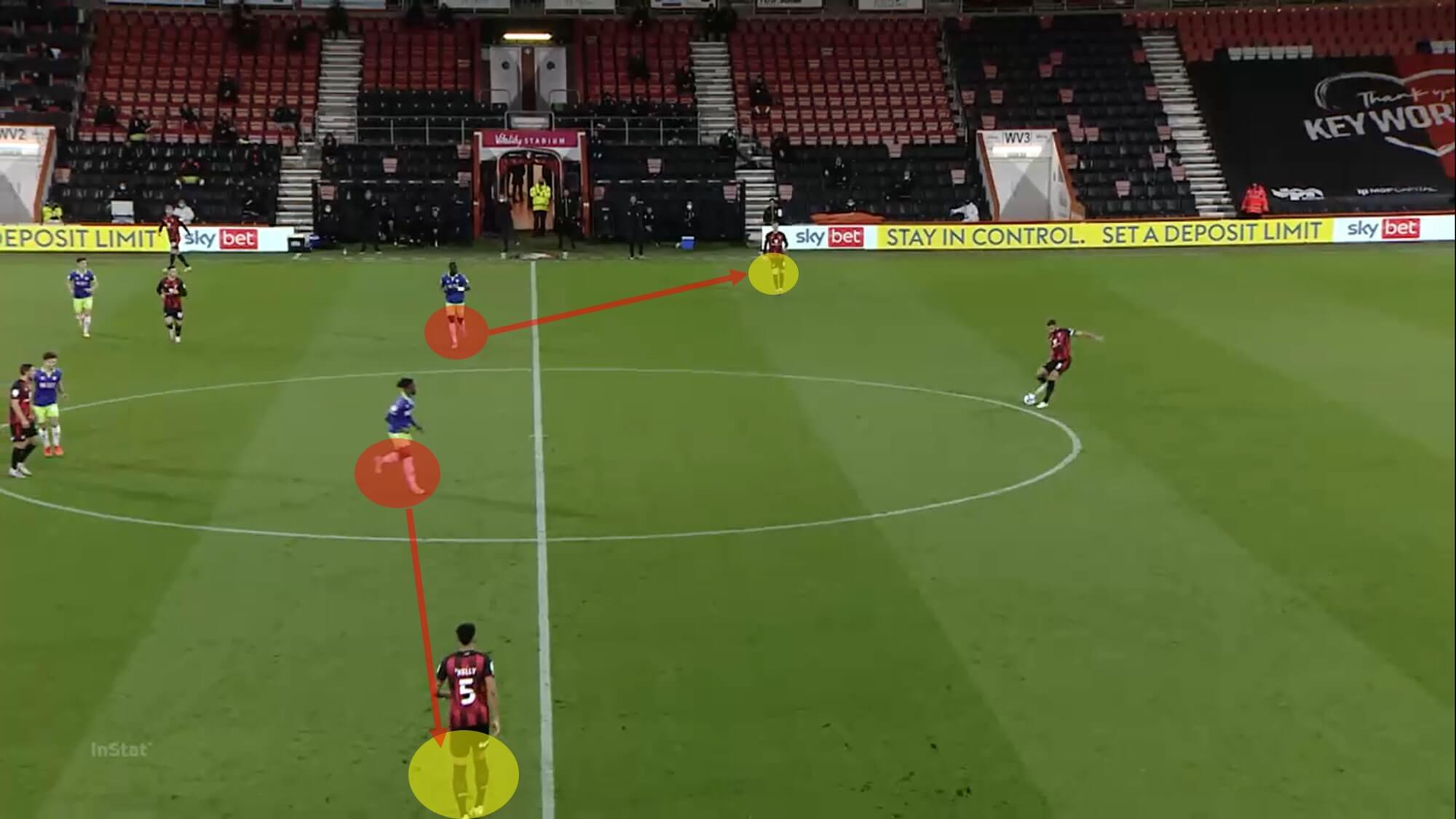 Bournemouth didn’t make the most of that advantage in the first half though, because they often tried to look for direct balls into the channels that didn’t come off. If they were more patient in possession, they may have had more joy in that first period.

Dean Holden’s side picked their moments to press well, especially in the first period. They used certain pressing triggers so they could hunt in packs and move forwards as a team. Their main pressing trigger was when a Bournemouth central defender received the ball in a deep area, with their body orientation facing inwards. 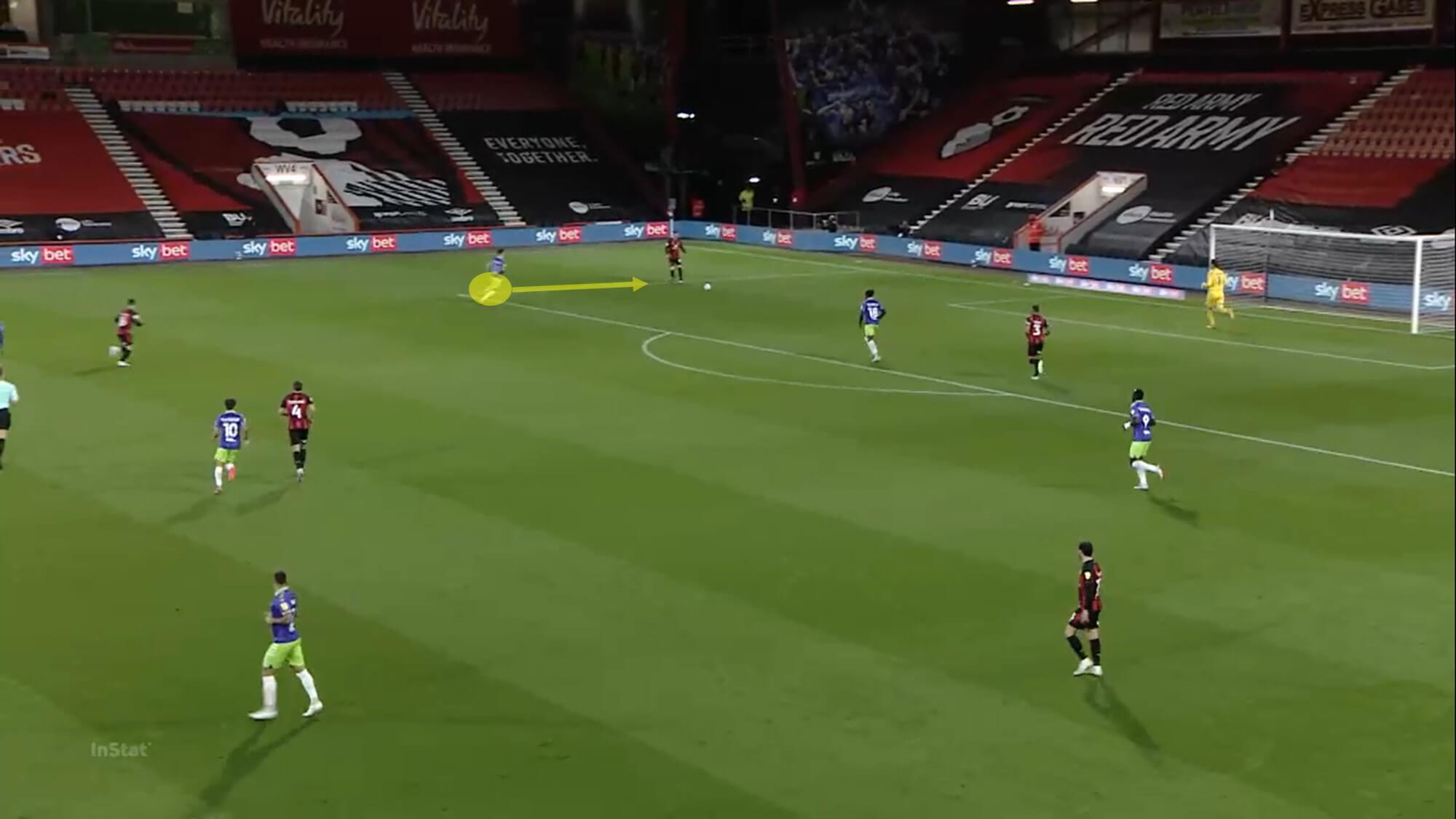 There were a few reasons behind this. First of all, the closer to the opponent’s goal you win the ball back, the more chance you’ve got of scoring. Secondly, as we mentioned before, it’s easier and less risky to press players in wide areas. And as Chris Mepham’s body is facing the opposite touchline rather than the opposing byline, he’s got to take a touch then turn if he’s going to play the ball on his stronger right side. This slows down the build-up, meaning it’s easier to nip in and win the ball back.

The other option for Mepham would have been to meet the ball and take it on the inside, but he’d then be forced to clear the ball with his weaker foot because of the angle he’d be on the ball at. In the image above, O’Dowda presses him at an angle where he tries to show him inside. Mepham decides to play the ball to Jack Stacey, as it’s his only option despite the fact Stacey is also under pressure. This is where the second part of this particular press comes into play. Tommy Rowe, the left wing-back, jumps forward to press Stacey from behind. 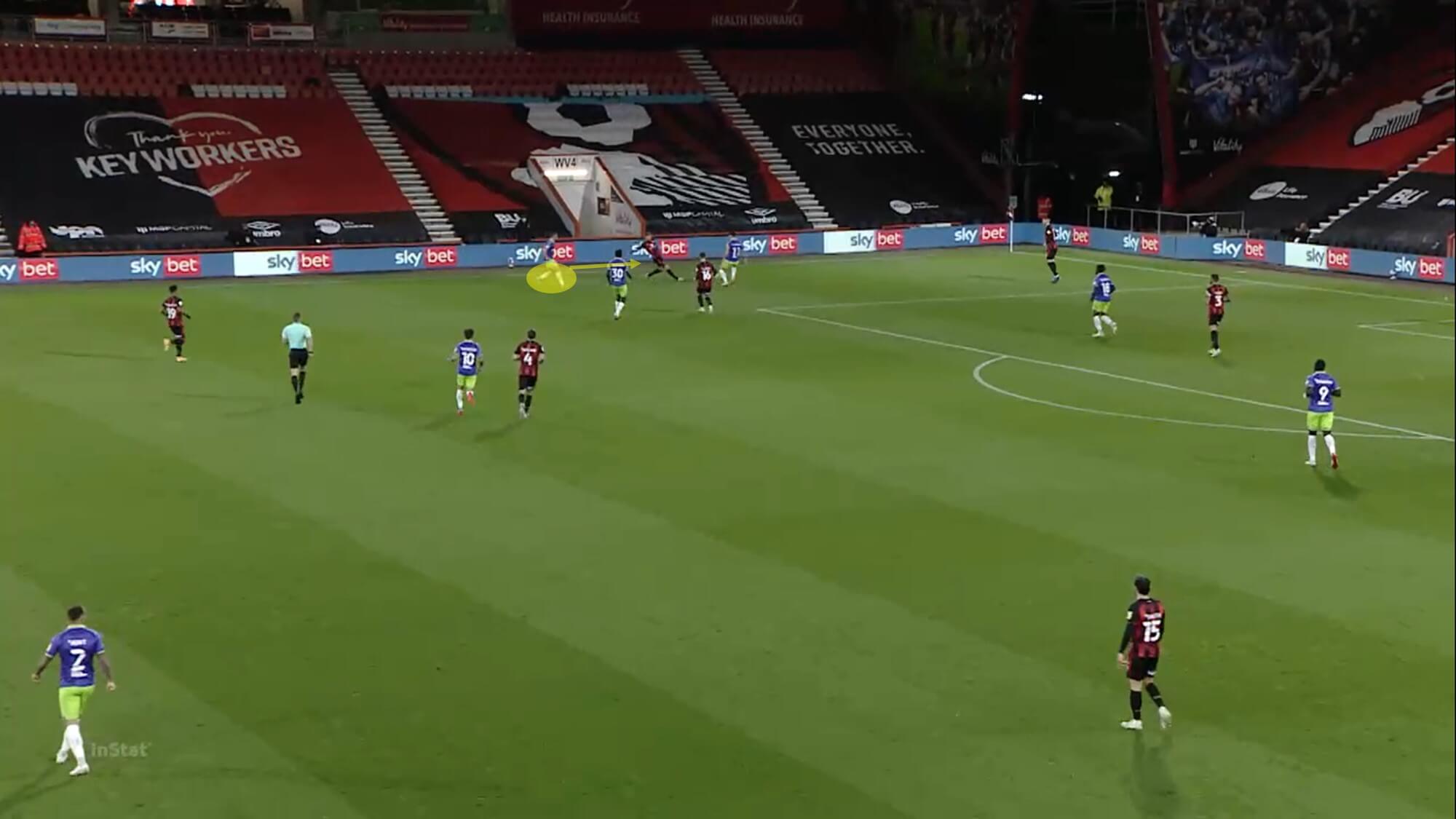 He’s then forced to play the pass back to Mepham, who is under pressure again from O’Dowda. He attempted to clear the ball but O’Dowda blocked it and Bristol City forced a high turnover.

The Robins were the better side in the first half, and their attacking play was very promising. They frequently overloaded the half-spaces as a method of attacking the Cherries. In the image below, City have three attacking players in the left half-space, circled in yellow. 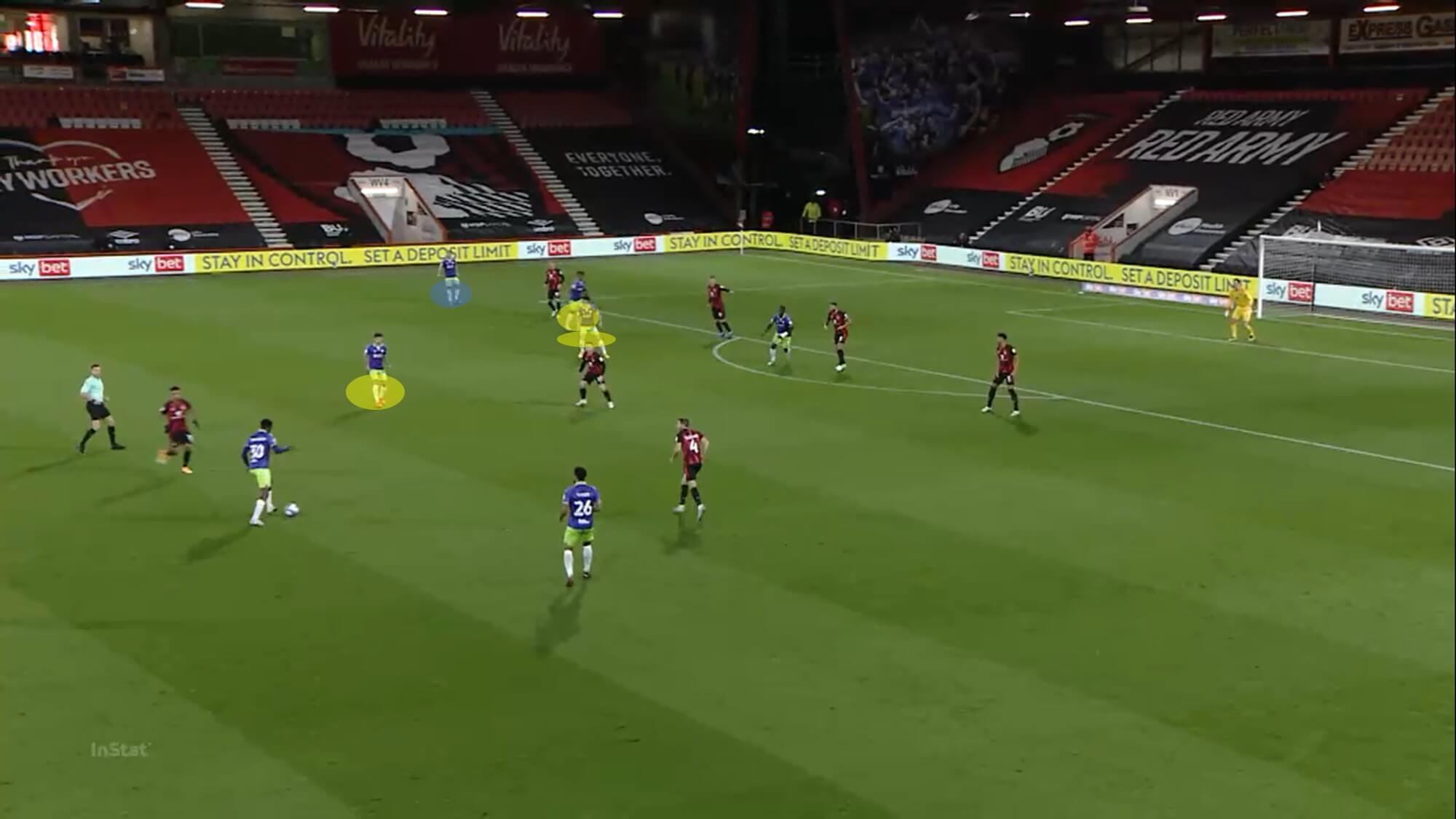 Rowe (circled in blue) is in a wide position. This pins back opposite wing-back Stacey, who is now unable to move centrally and help with the overload. Cook and Gosling now have their work cut out in that central midfield area. Because there’s only two of them and their wide player is unable to come narrow to help, it was easy to get down the sides of them. The visitors exploited that and tried to isolate the Bournemouth pair in a 3v1 scenario. In those areas, they could play quick combination passes between the lines of Bournemouth’s defence and attack. This would force a defender from Bournemouth to come out of the backline and engage, meaning they could look to exploit space in behind.

Bristol City were happy to mix up their attacking play. They weren’t afraid to play long balls into the strong front two of Diedhou and Semenyo. From that point, central midfielders O’Dowda and Paterson were given license to push forward to support them. They’d try to get in behind Bournemouth’s midfield and operate between the lines. 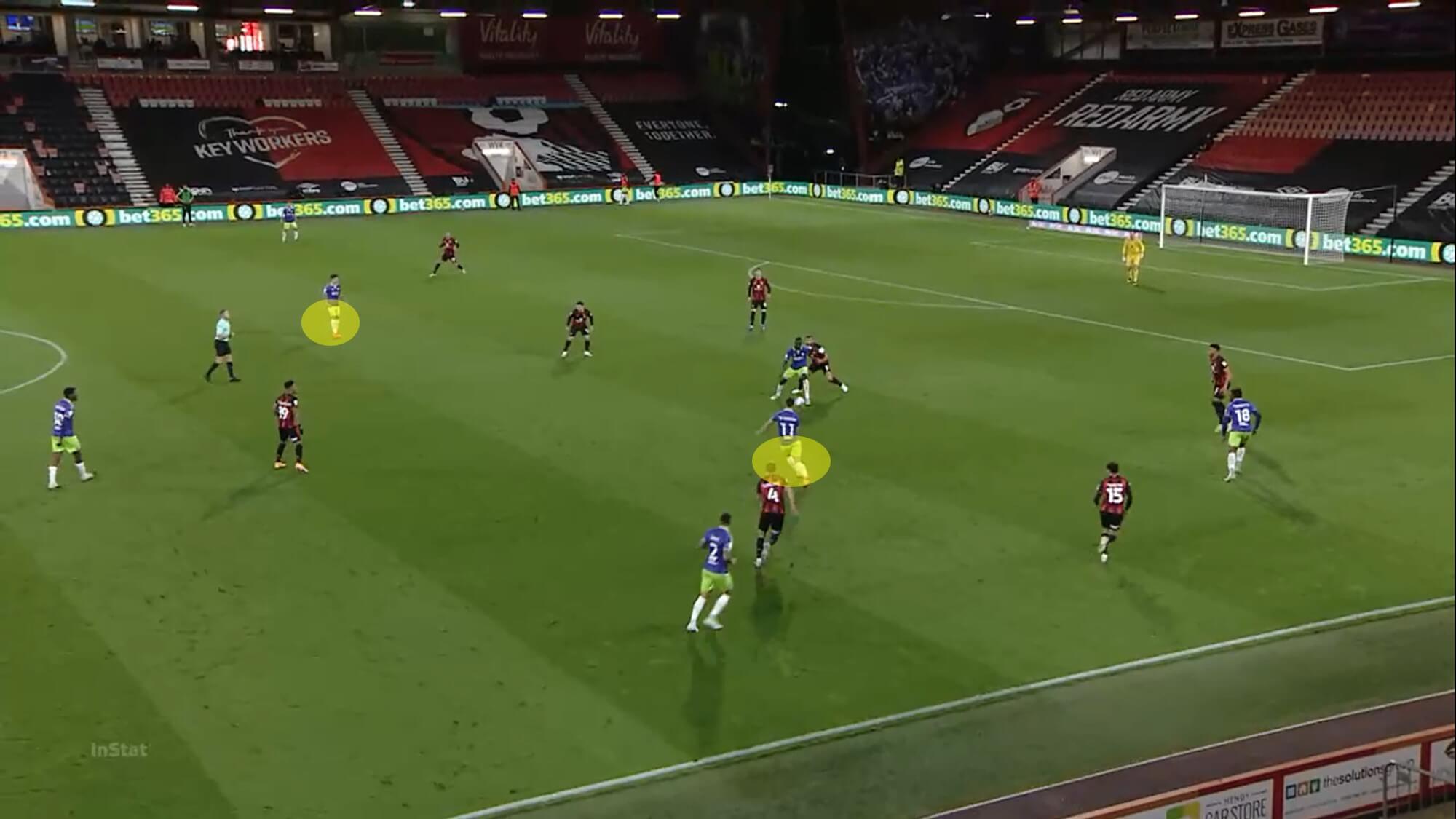 Jason Tindall’s side improved hugely after the interval. In the first half, they created just 0.06 xG. But after the break, their xG for was 0.95. They improved this by being more methodical in their attacks. Although they weren’t afraid to play balls into the channels, they picked the right moments to pick those kinds of passes. The South Coast club were more patient in their play, and the attacking rotation and ability to pick City off on the counter was impressive.

Bournemouth were also better at solving the problem of Bristol City overloading the wings when they were defending. In the image below, Dan Gosling plays a switch out to the less populated right flank, where Jack Stacey has more space to build the attack. 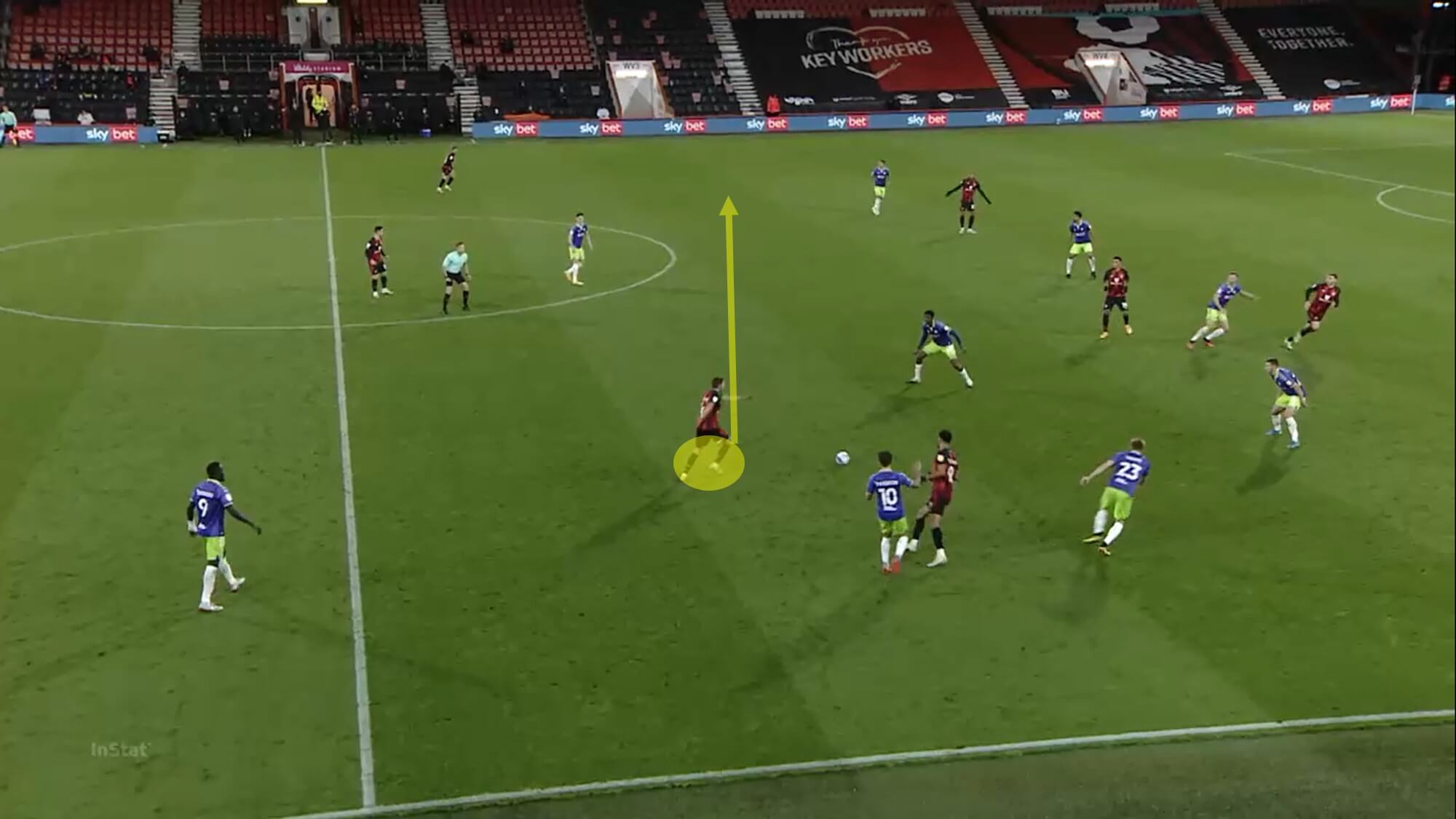 Switching the ball out in a more direct fashion rather than going through another midfielder in Cook meant that Bristol City had less time to push players across to deal with the threat.

Dominic Solanke also had a big role to play in the second half, as he often dropped deep to link play. In the image below, Solanke has just dropped into his own half as Bournemouth defended. 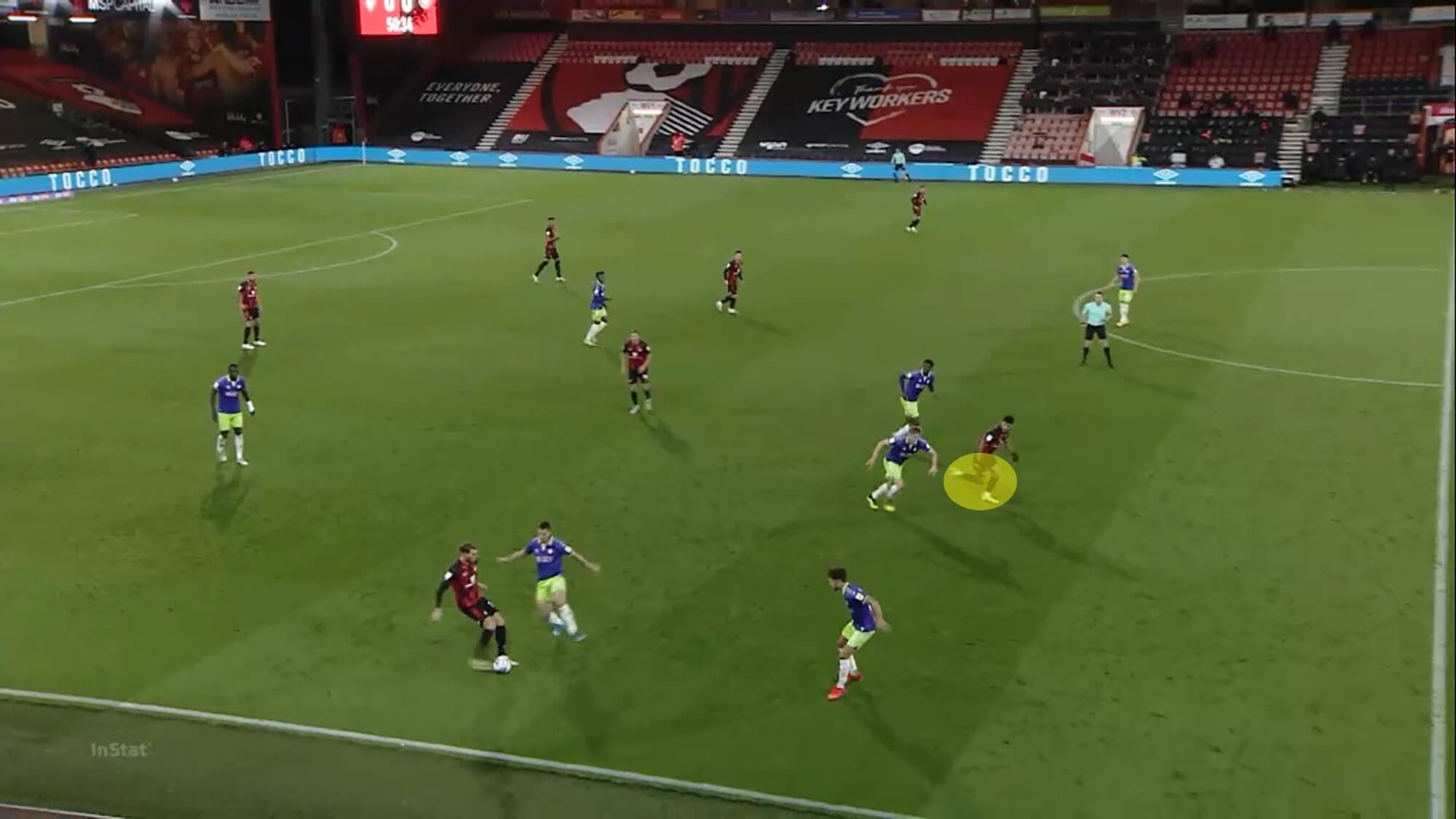 He played a pass back to Jack Stacey, before immediately spinning behind the Robins’ midfield and running into the space that they’d left by pushing up to press. Solanke was then leading the charge in a 3v3 situation, with the Robins’ defence completely shorthanded on the break. 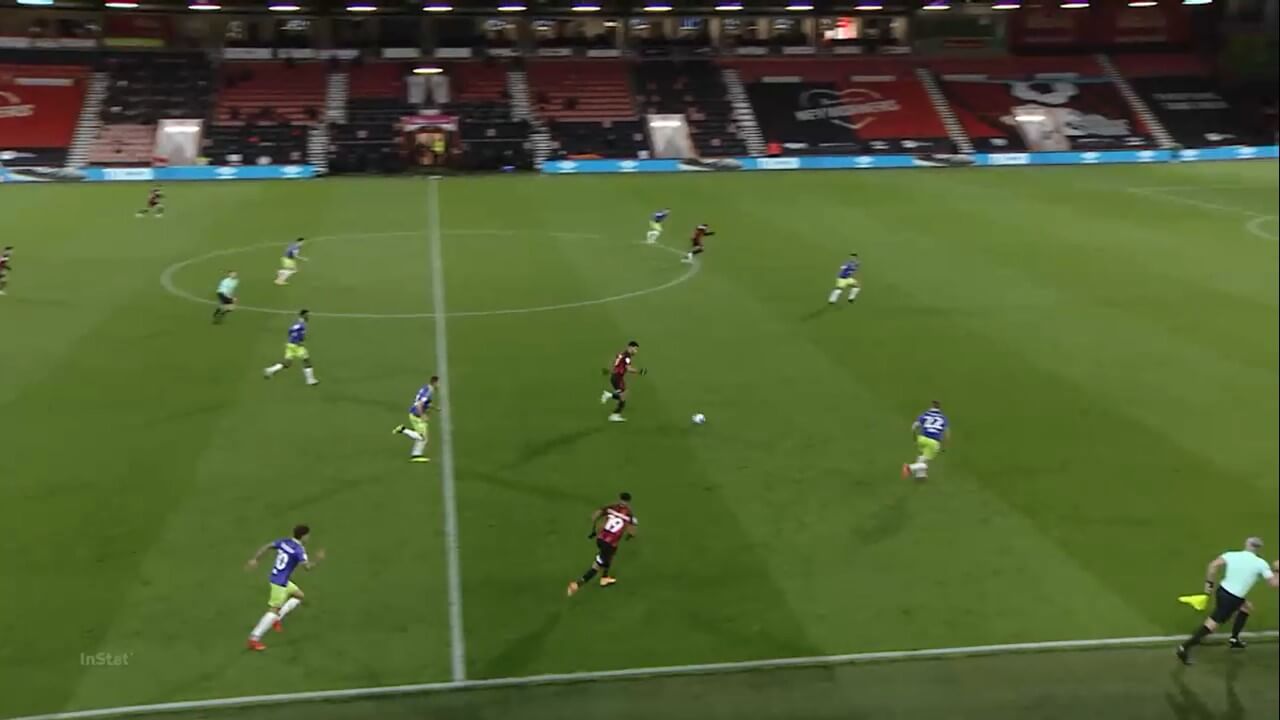 Bournemouth’s attacking rotations were also on display en masse after the interval. Throughout the game, we saw hints of overlapping centre-backs on display from both teams, as they looked to create overloads out wide. Interestingly, Bournemouth worked the ball into a great position by utilizing an underlapping centre-back. In the next image, left centre-back Lloyd Kelly plays a through ball down the line to wing-back Adam Smith. 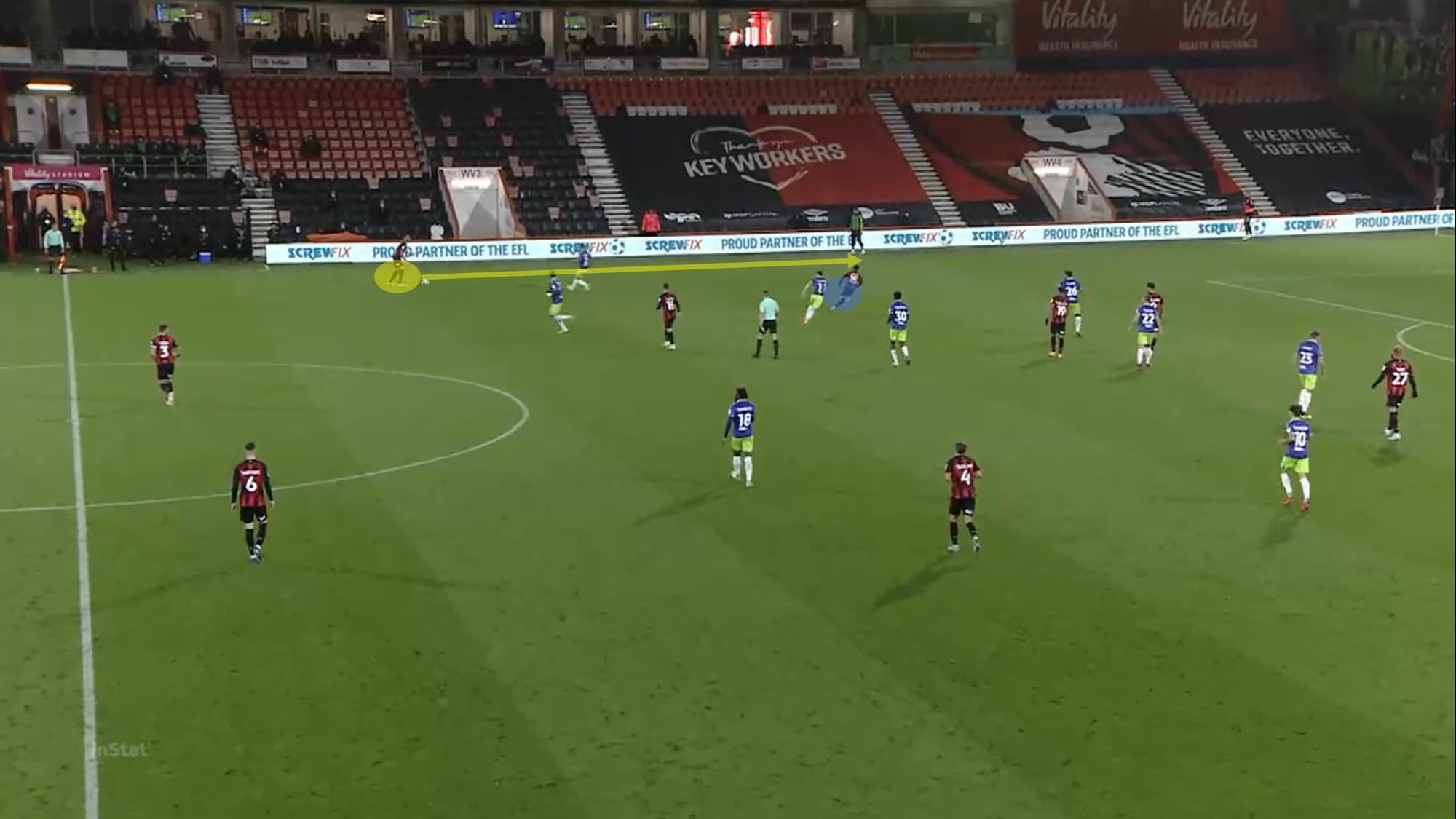 As Smith is in a wide position without the support of a full-back from behind, Kelly makes an underlapping run to support him. This run caught Bristol City by surprise, and nobody could pick up the run of Kelly. 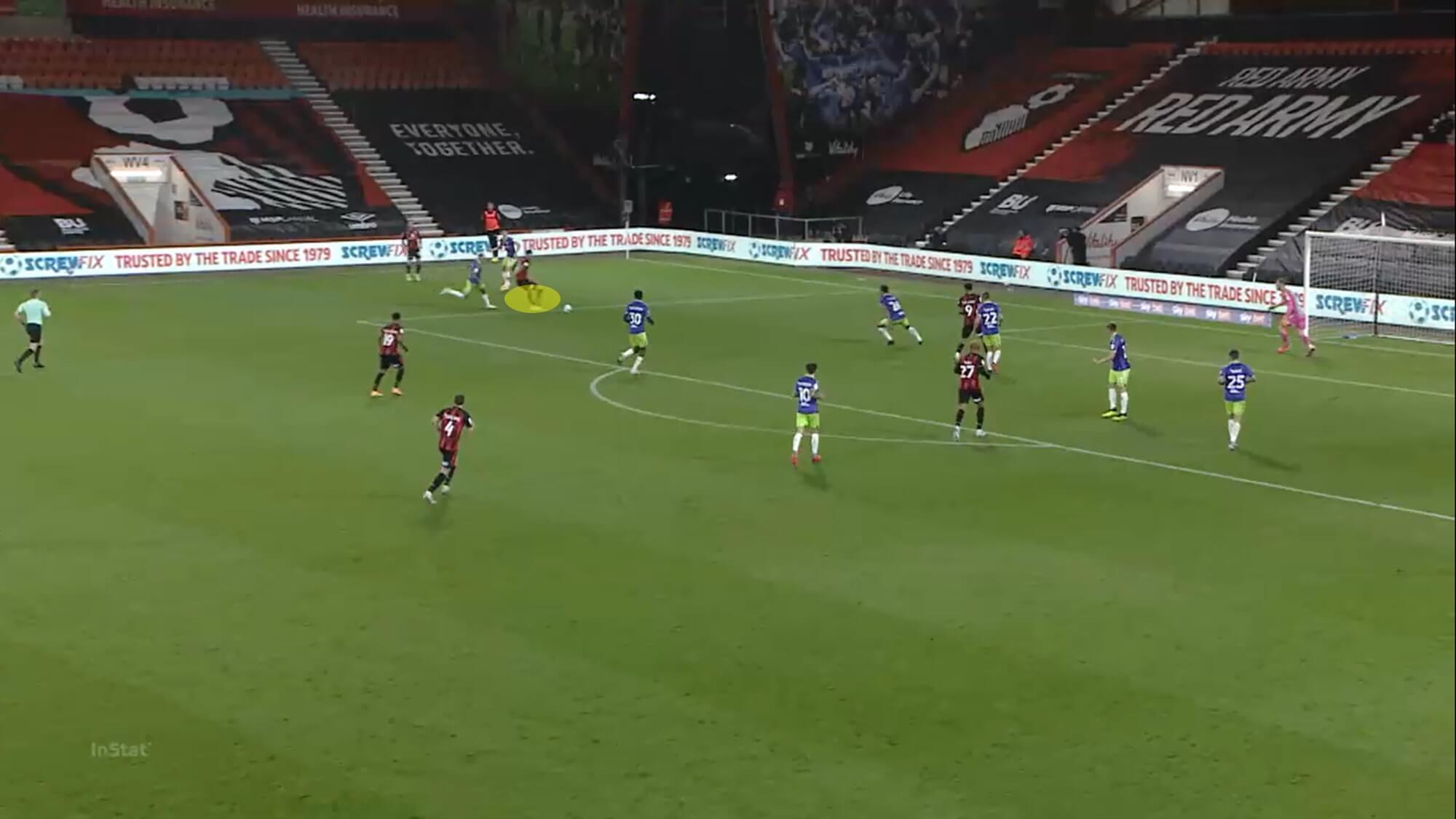 The only goal of the game was created by the fantastic timing of Bournemouth’s rotational movements. In the next image, Danjuma has dropped deep to play a pass backwards to Smith. He stays where he is for a split second, as he’s dragged his markers into a slightly wider position. This creates a gap for Smith to find Solanke, who drops off the forward line to link play. As soon as the pass is played to Solanke, Danjuma spins and runs in behind his marker after creating that space for himself by staying a bit deeper. 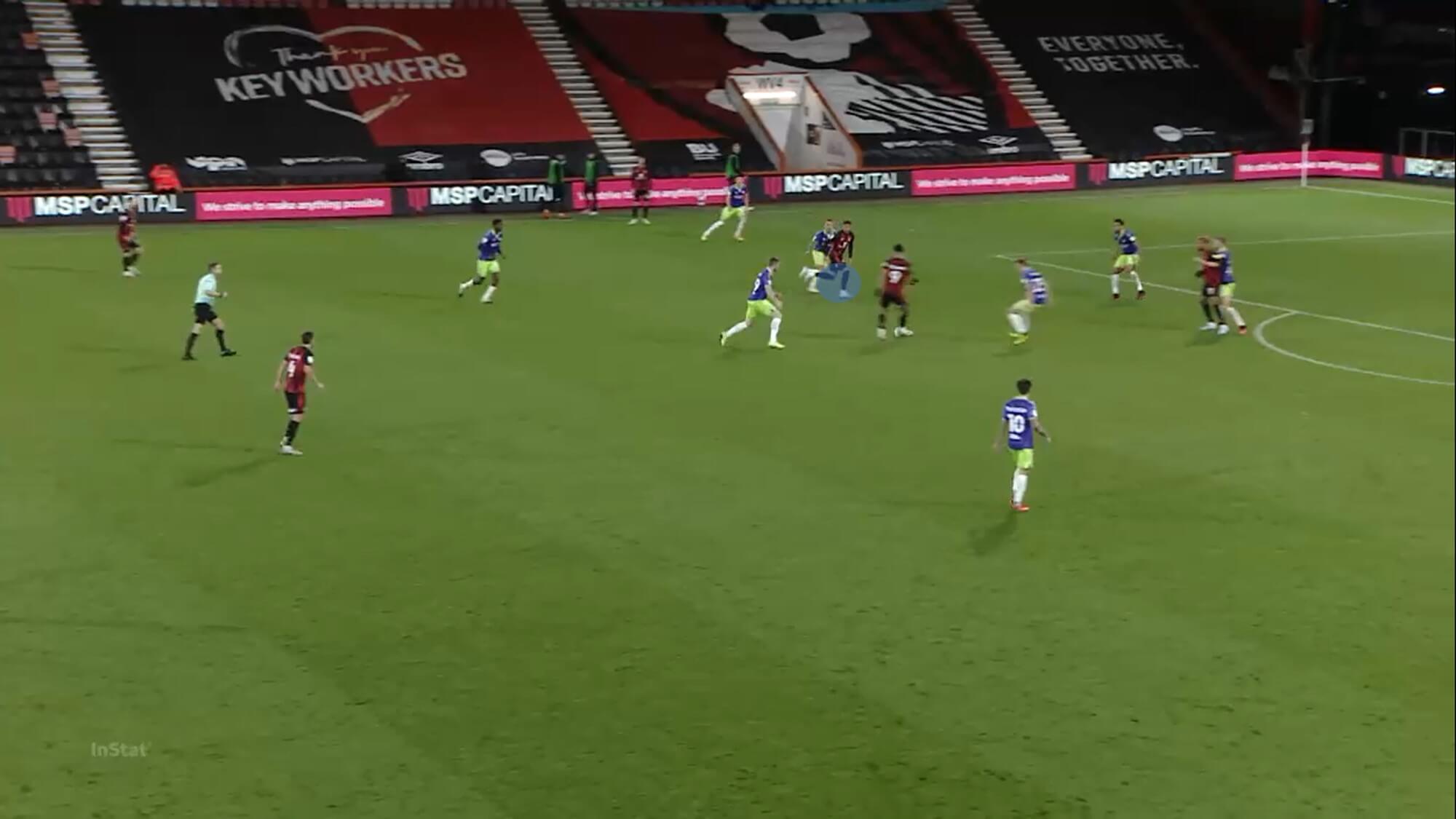 He then ran through and cutely chipped in the winning goal.

This was a classic game of two halves, with Bristol City in charge of the first and Bournemouth responding by controlling the second. In the end, it was won by a difference in clinical finishing. City had a couple of very good chances in the first period, which they didn’t manage to take. On the overall balance of play, a draw probably would have been the fairest result.

But both sides can take plenty of positives out of a well-fought Championship clash.