Torino came into this game on the back of a five-game unbeaten run in Serie A, scoring four goals and conceding none. Atalanta came to Turin on the back of a 3-1 loss against AC Milan, ending an eight-game undefeated streak in all competitions going back to Boxing Day. With both sides on the edge of the European spots, many were looking forward to this match as a contest between two sides who both play effective pressing football.

Torino have conceded fewer goals through 24 matches in Serie A than any campaign since the 1992/1993 season, but they are winless in their past five league meetings against Atalanta. Under manager Walter Mazzarri, Il Toro have become defensively impressive having only conceded 22 goals this season, but they have struggled in attack with only 30 goals scored.

Atalanta, under Gian Piero Gasperini, have been one of the most entertaining sides in Italian football. They have scored the second most goals (51) in Serie A, only two behind league leaders Juventus. 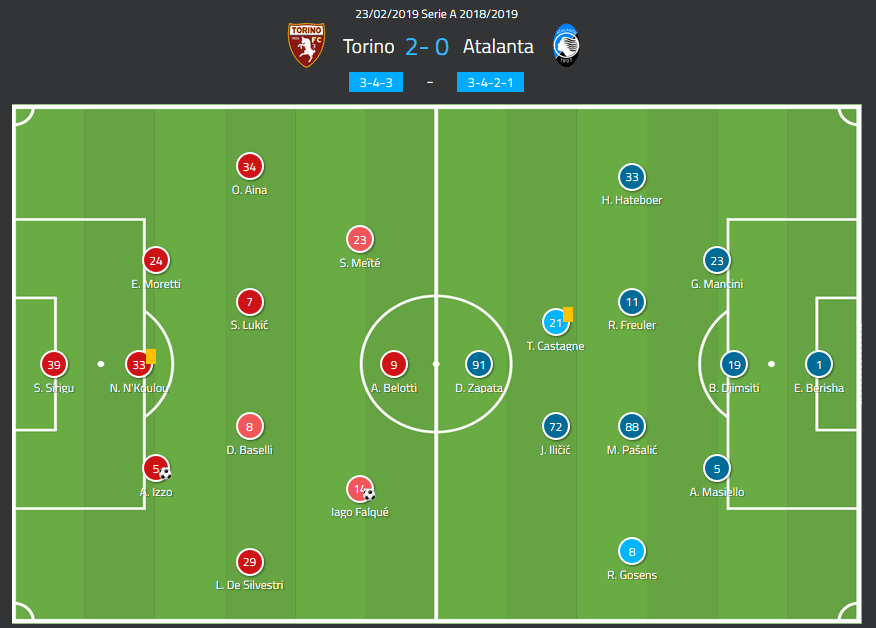 Fresh off an impressive 0-0 draw with second place Napoli, Torino made three changes. Mazzarri reverted from a 3-5-1-1 against Napoli to his more standard 3-5-2 against the team from Bergamo. Iago Falque came into the starting lineup, leading the front line alongside Andrea Belotti. Daniele Baselli came into central midfield alongside Sasa Lukic, taking the place of a suspended Tomas Rincon, while Soualiho Meite came into the midfield as Cristian Ansaldi dropped to the bench.

Atalanta made four changes over the side that lost at home 3-1 to AC Milan. Alejandro Gomez missed the match through injury, which meant Timothy Castagne moved from left wing-back to the right attacking midfielder behind Duvan Zapata, who has the fourth most goals in Serie A so far this season (16).

Chelsea loanee Mario Pasalic started in midfield instead of the suspended Marten de Roon. The biggest changes were in the backline, where two of the three centre-backs were changed. Andrea Masiello and Gianluca Mancini started alongside Berat Djimsiti, which meant Rafael Toloi and Jose Luis Palomino didn’t keep the starting berths they had held against Milan.

This tactical analysis will look at some of the key points in this match, such as the sloppy play by both sides. We will also look at how Torino were able to neutralize Atalanta’s defensive pressing, and how Torino worked to slow down Duvan Zapata.

This was expected to be a match between an excellent defence in Torino, and an exciting attack from Atalanta. Unfortunately, this match never really got going as a result of some sloppy passing by both sides. In the first half, neither team could complete even 85% of their passes. They were responsible for giving the ball away early and often. It was common that the passes coming out of the defence were sloppy or miscontrolled, even when under very little pressure.

As we can see from the image below, Atalanta are deep in their own zone and under pressure from Torino. Instead of playing a safe ball forward to Duvan Zapata, a powerful presence in the air, Remo Freuler attempts a backheel that is easily intercepted by Torino. This ball recovery allows Torino to counter attack from within Atalanta’s half.

When Atalanta were able to play out, they had a constant dangerous target in Josip Illicic. He played behind Zapata and was the most dangerous attacking option for La Dea. He typically plays up front alongside Zapata with Papu Gomez in the playmaker role, but without Gomez in this game, he played deeper and took up the playmaking responsibilities.

In the image below, we can see that Atalanta are on the counter attack. Illicic is peeling off his defender and looks to receive the ball in space. The ball is played out to him, and he is able to dribble at his defender with pace to give Atalanta one of their few chances in the match.

Atalanta looked to press Torino high up the pitch, but Mazzarri was prepared for the challenge. With Soualiho Meite in midfield, the Granata used him as a target man to play into. As you can see from the graphic, most of his touches came from long balls launched forward for him. 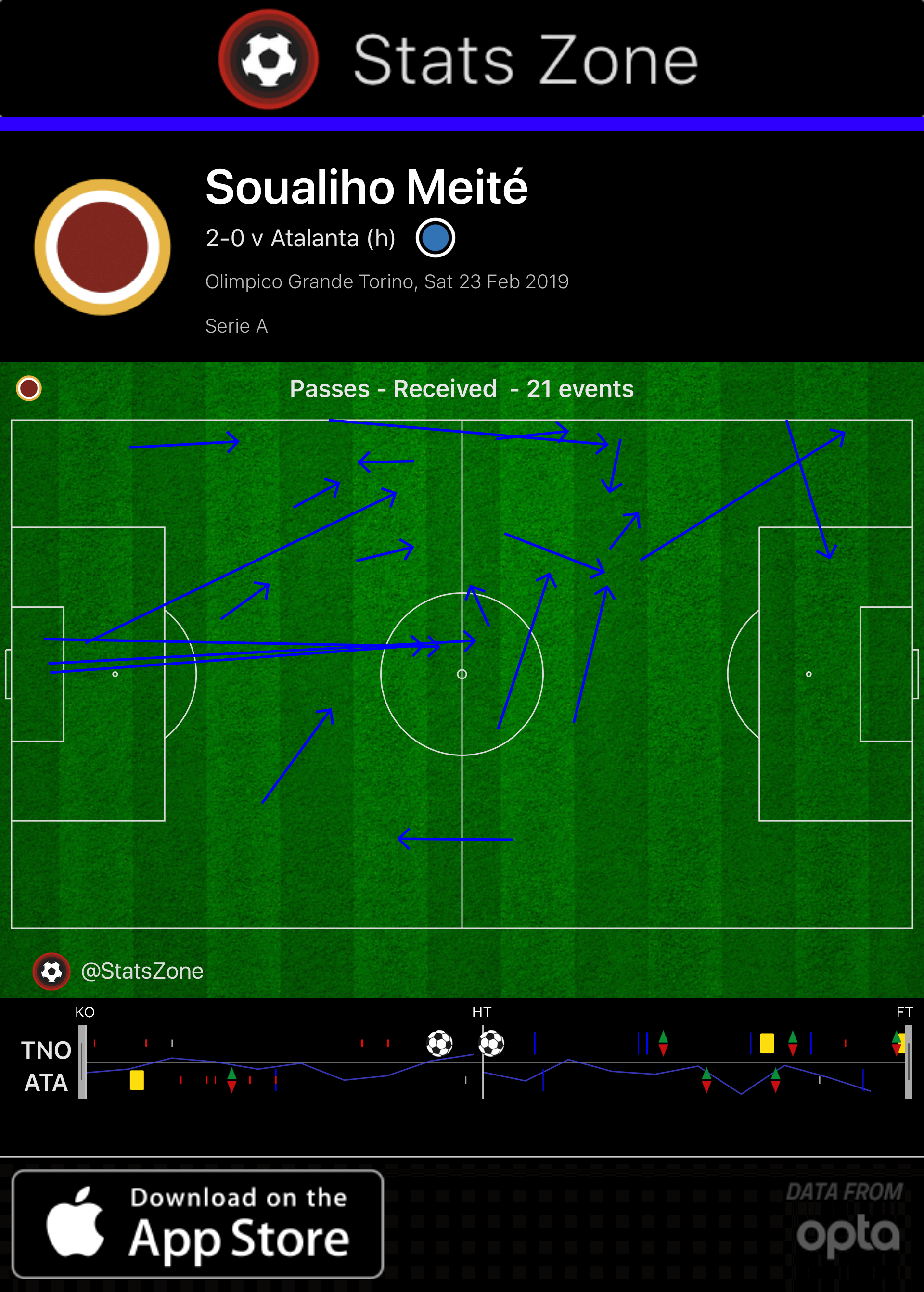 The French midfielder won half of his duels, allowing his team to bypass Atalanta’s very organized press. Ola Aina played at left wing-back for Torino, but he played a more reserved role as Meite was often the option for providing width on the left side of Torino’s attack. We can see from the image below that Meite is able to outmuscle his marker to win an aerial ball, which allows Torino to establish themselves higher up the pitch.

Torino worked hard to keep Duvan Zapata quiet during the match. The Colombian striker has scored 16 goals so far this season in Serie A, averaging 0.6 goals a game, and has been a key component of a dangerous Atalanta attack. To close this down, Torino’s back line were very man-oriented in their marking. Torino’s best centre-back, Nicolas N’Koulou, marked Zapata and managed to limit him only four touches inside Il Toro’s penalty area. 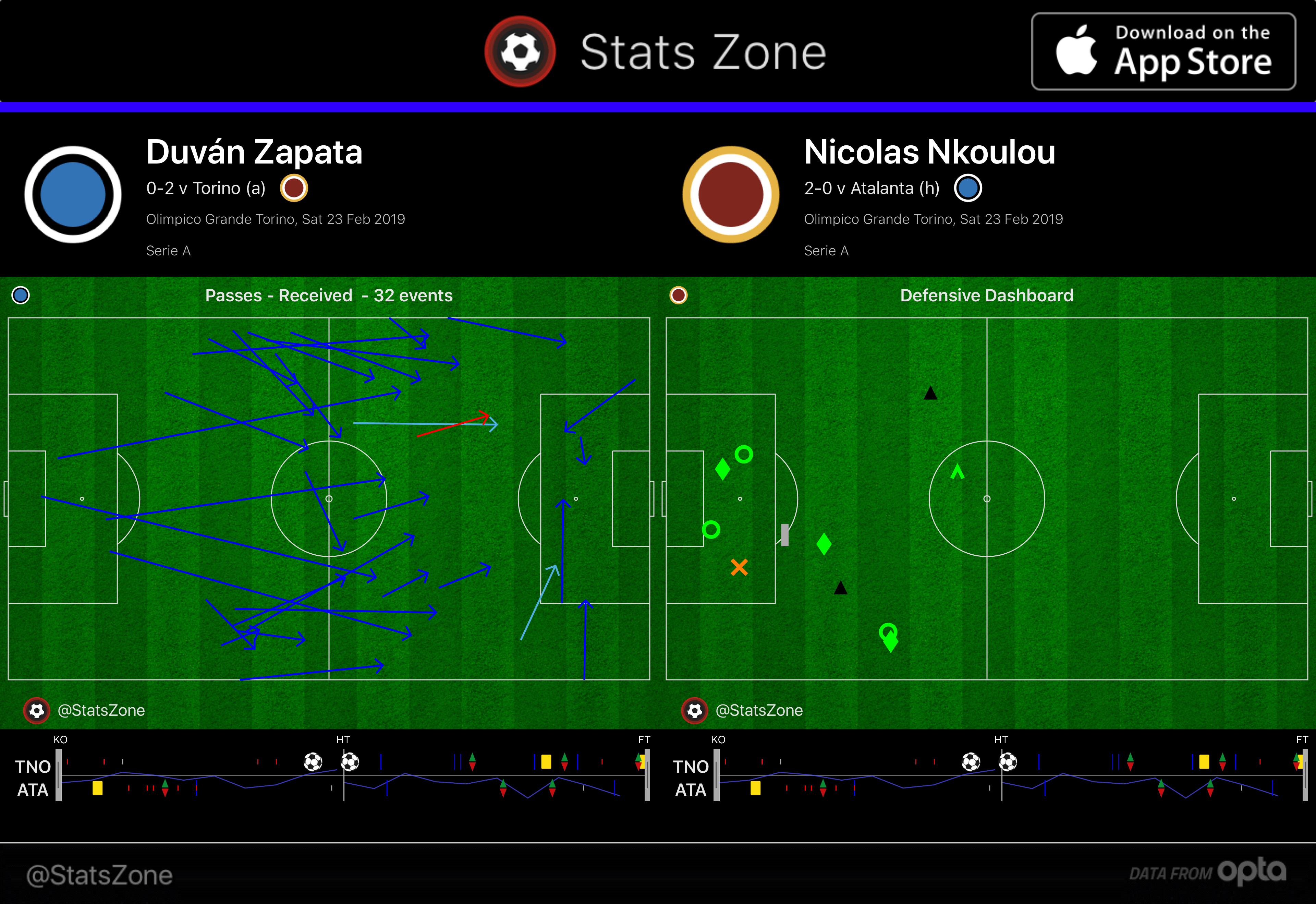 Additionally, Armando Izzo and Emilano Moretti were willing to step forward to close down the space for Illicic and Timothy Castagne. This limited the ability of Atalanta to progress the ball up the pitch. Their best option would end up being to get the ball early to Illicic and having him drive forward with the ball at the Torino defence.

This was a messy match that Torino managed to win through some lucky bounces and momentary defensive lapses on the part of Atalanta. According to the xG from Understat.com, this match should have been much closer.

Torino’s ability to bypass an aggressive press from Atalanta allowed them to get forward easier than it was for Gasperini’s side. This might not have been the attack vs defence match we were looking forward to, but Torino’s 2-0 victory was the result of Walter Mazzarri adjusting his strategy to solve problems.