Cameroon will take on New Zealand in the final fixtures of Group E at the FIFA Women’s World Cup. A late goal by Dutch superstar Vivianne Miedema put to bed any potential comeback amounted by Cameroon who produced a spirited performance. The scoreboard wasn’t representative of the performance produced. The Football Ferns also succumbed to defeat in their second outing of the World Cup against Canada. A lack of creativity going forward and goals from Jessie Fleming and Nichelle Prince were enough to ensure that New Zealand enter the final group match bottom of the standings.

With Canada and the Netherlands progressing through to the round of 16, both Cameroon and New Zealand can ill-afford defeat. Losing will guarantee their exit out of the World Cup and for New Zealand, they wouldn’t want to finish a second consecutive tournament bottom of the table. Cameroon, on the other hand, will hope to replicate 2015 by progressing to the round of 16, but they must win in Montpellier.

With results from last night’s controversial 3-3 draw between Scotland and Argentina, a draw won’t be enough for either side to secure advancement to the round of 16.

It’s very likely that we will see one side play out of its comfort zone with both opting to play predominately on the counter-attack. Cameroon have shown plenty of spirit and desire in their opening two fixtures but haven’t got much to show for it. Whilst New Zealand have been soundly dominated in their defeats to Canada and the Netherlands. This tactical preview will articulate how the match might potentially play out using analysis.

In their opening fixture with Canada, Alain Djeumfa opted for a 5-4-1 with two central midfielders and wing backs as Cameroon sat back and invited the Canadian pressure. In the 3-1 defeat to the Netherlands however, Djeumfa returned to the 4-3-3 which had been successful throughout qualification.

This allowed Cameroon to be far more dangerous going forward and it showed. Gabrielle Onguènè was a thorn in the side of the Dutch creating countless scoring opportunities for herself which included getting Cameroon’s first and only goal of the tournament.

Raissa Feudjio dropped deeper into midfielder whilst Jeannette Yango and Genevieve Ngo remained tight in the midfield three. A reliance on the attacking wingers in Onguènè and Abam to drop back into midfield without possession before countering the opposition when the opportunity arises. 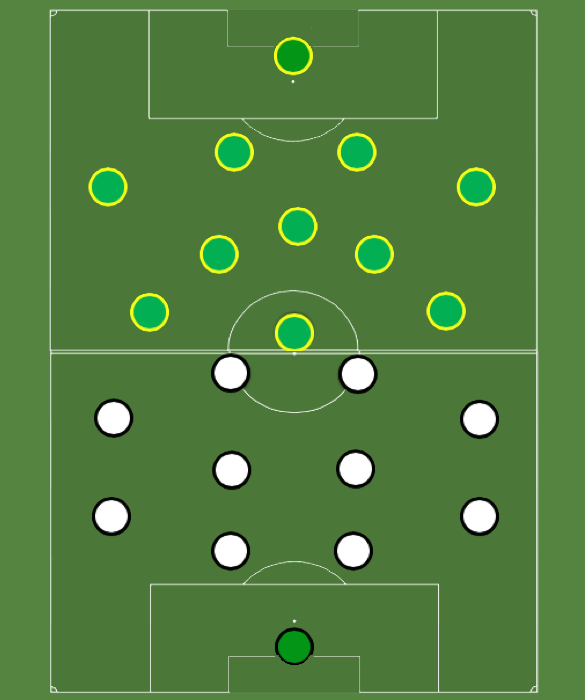 New Zealand opted for a 4-4-2 formation for both of their defeats so far this tournament. The same starting 11 has been selected by manager Tom Sermanni but changes can be expected for this encounter.

Defensively, the Football Ferns have taken a beating yet the performances of Rebekah Stott and Abby Erceg have been commendable. The issue New Zealand have had is in midfield and going forward. Opting to be a counter-attacking side, New Zealand have suffered to control possession consistently with only 28.12% for the tournament.

It’s no wonder New Zealand have struggled to create any chances going forward with a lack of service from midfield. This has seen another issue form through their inability to retain possession and build quickly. Striker Sarah Gregorius is the hold-up player, however, she struggled mightily to do winning only 29% (5/17) duels in the defeat to Canada.

There were two defensive attributes which were prominent throughout the 3-1 defeat at the hands to the Netherlands. One is their willingness to tighten the pitch and pin the Dutch towards the touchline of their defensive half as well as defending in a 4-4-2. Our tactical preview for this section will show how this is utilised. 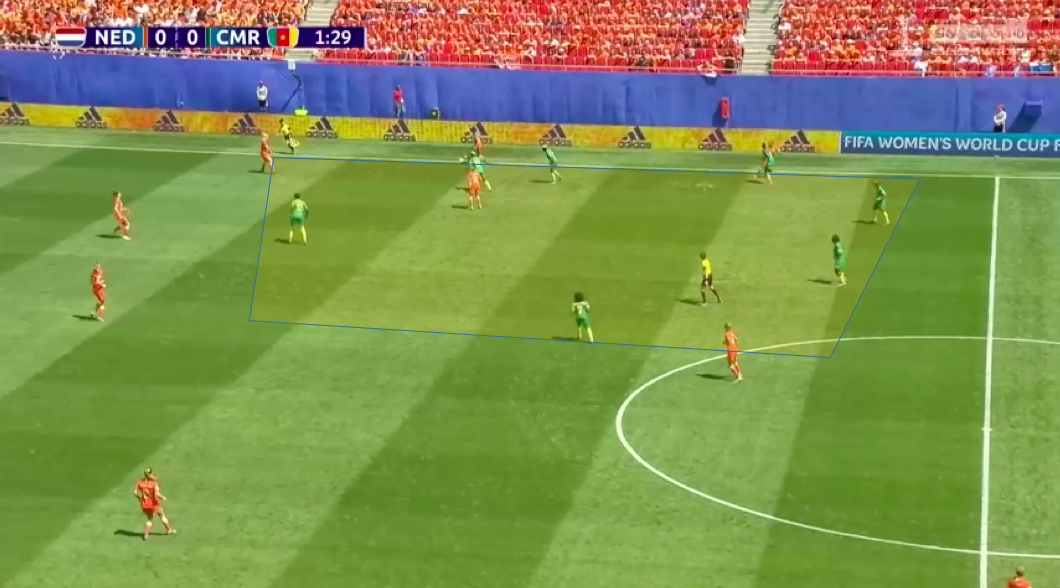 In the opening image, we can see the game plan implemented by Djeumfa. Midway between half way and Cameroon’s attacking box, the Dutch look to play their way out of defence. Heavily pinned towards the touchline, Cameroon hope to pounce on any potential mistakes. As many as seven Cameroon players are in the area highlighted. Against poor sides the potential of winning back possession is possible.

However, Cameroon were caught out on numerous occasions which allowed the Netherlands to play the ball back and eventually switch the play to the far side. With numbers heavily situated on one side, quick ball movement allowed this tactic to be exploited. 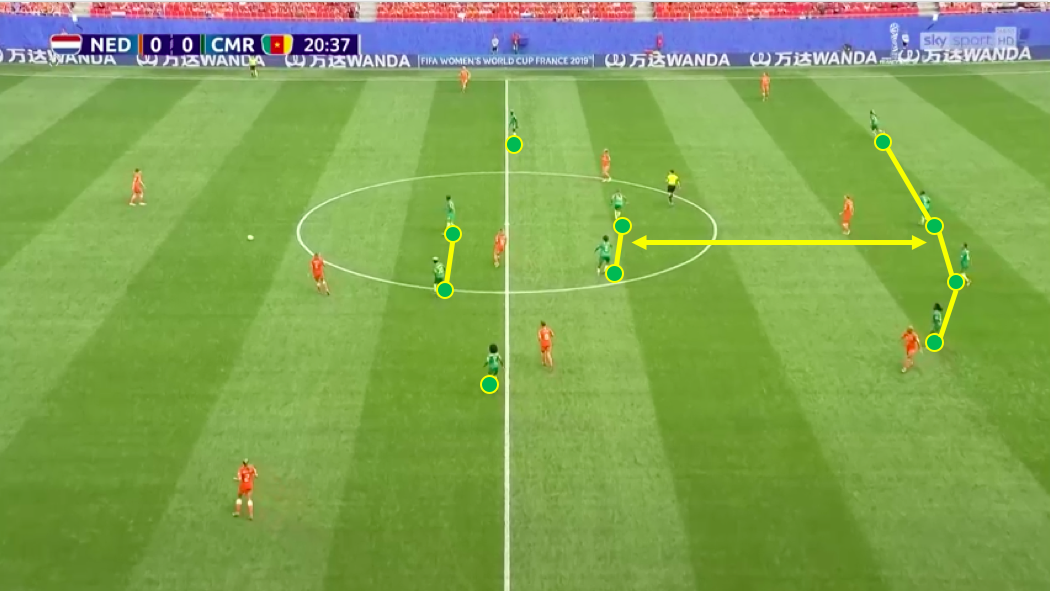 The next situation showcases Cameroon defending in a 4-4-2 as the Netherlands build their attack. One of the central midfielders, namely Ngo pushes up to form the two-player attack whilst Onguènè and Abam drop into a conventional wide midfielder role. Yango tucks in alongside Feudjio to form the double pivot.

As the image showcases, the space between the double pivot and the defence is alarming. Way too much space and with precise ball movement, the two central midfielders are out of the equation altogether.

New Zealand have done a lot of defending throughout the World Cup and unlike some sides, they have done relatively well in keeping the number of goals down. Only three goals conceded in the opening two fixtures. As mentioned, New Zealand have used the 4-4-2 formation throughout this tournament. Let’s see how it’s applied when their opponents are on the attack. 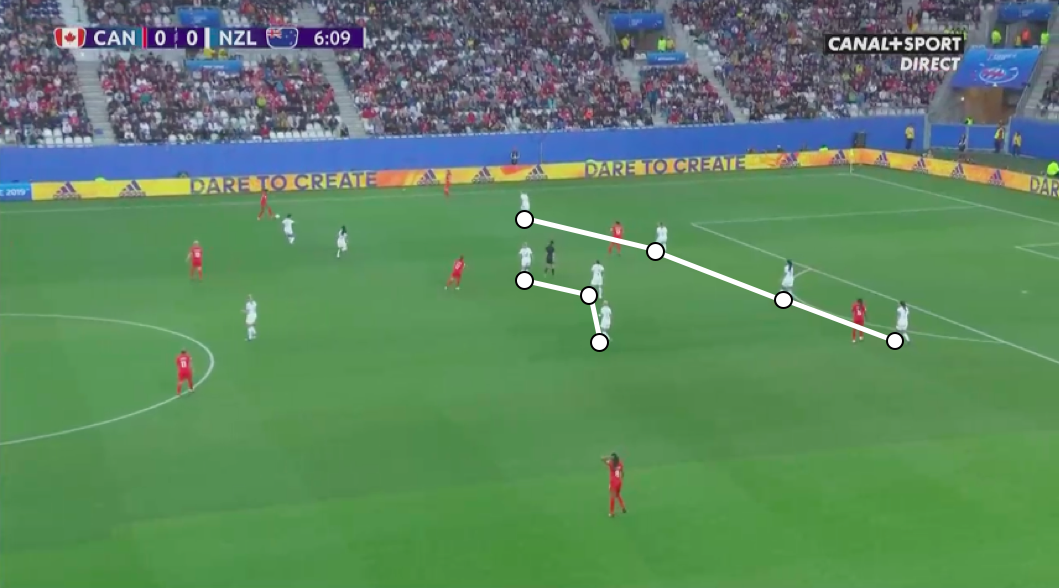 We look at the opening the early phase of a Canadian attack and already we can see the shape form. The back four are relatively well aligned with the right-back keeping tabs on Canada’s left midfielder.

In midfield, the left winger Betsy Hassett tucks in tight with the central midfielders to make a tight three. This leaves plenty of space on the far side from where the ball is if Canada wishes to switch. However, the interest comes near the ball.

Both Olivia Chance and striker Gregorius are filling in the gaps left by a tight midfield three. Leaving a striker isolated if they win possession back. 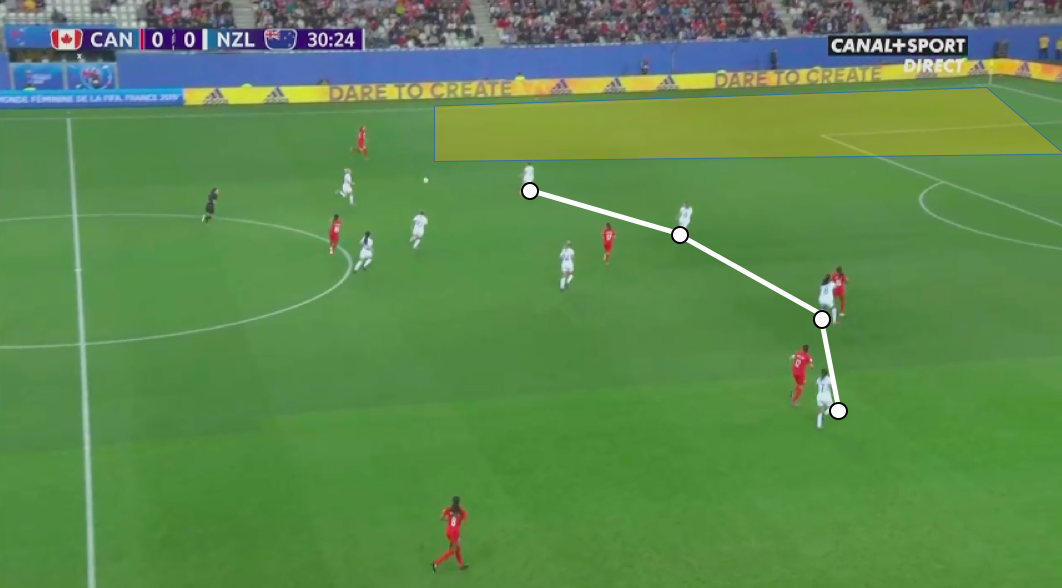 Later in the first half, we see what happens when the shape in midfield is broken and how the opposition can exploit this. The back four are spaced but remain relatively intact. In midfield, however, it’s a completely different shape. No real shape to speak of as Canada can pierce through the midfield with ease. As there is no cover, Canada is able to manipulate the space left vacant by the non-covering midfielder. Thus they do say and with numbers streaming forward they can deliver the ball into the box.

For this to happen, Canada were able to dispose New Zealand at half way and quickly counter. Throughout the tournament, it has been telling that the Football Ferns don’t cope well with sides that press. Cameroon have quick players out wide if the midfielders can press up and force a turnover it could provide potential goal scoring opportunities.

Wide areas for Cameroon to exploit

As mentioned in the previous point, New Zealand play tight in the defensive space and if the opposition can move the ball quickly from one side to the other then it creates an avenue at goal. Cameroon have quick players and their star in Onguènè is arguably one of the fastest players at the World Cup. If Cameroon can move the ball quickly, their will spaces to exploit out wide as these examples look to showcase. 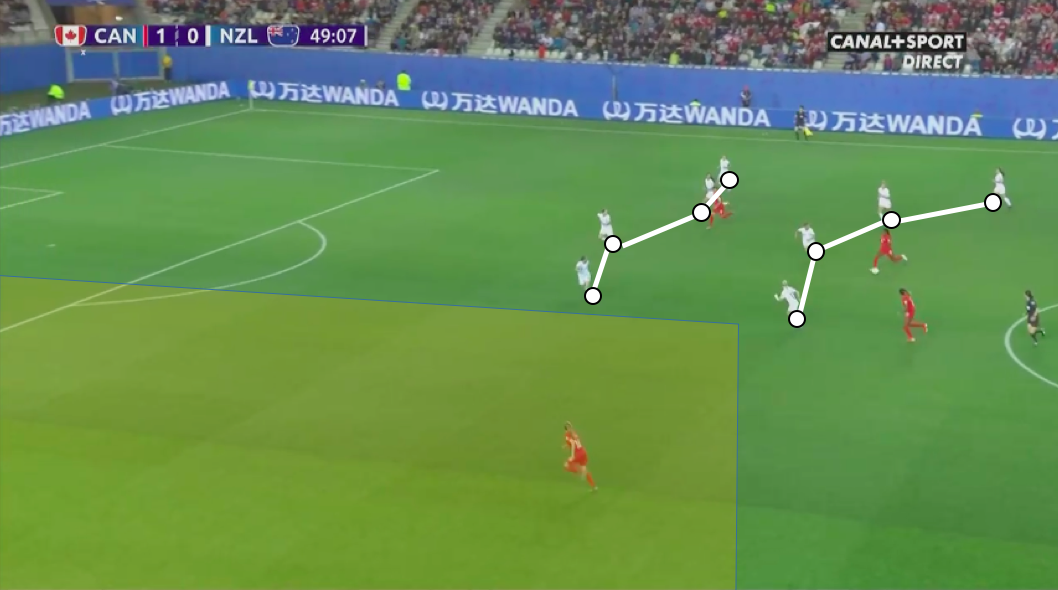 Here we see Canada on the attack how New Zealand can be open when the ball is switched with quickness and intensity. Canada start from the far side of the pitch passes inside creates the wide open space as highlighted. Despite New Zealand’s tight shape, the space on the far is too great that the full back wouldn’t have time to cover the opponent in stride. If Cameroon can utilise this with Onguènè in particular, it could prove to be devastating. 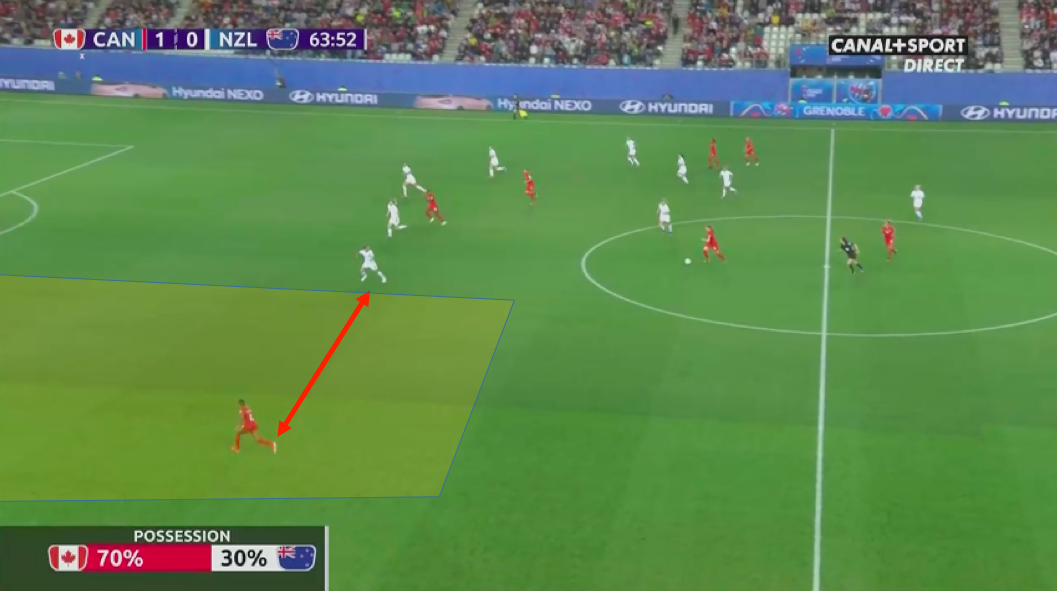 Again, another situation where New Zealand get tight to one side, quick play and a dynamic run by the Canadian midfielder allows Canada to exploit the wide spaces. The distance required to cover the midfielder from the Canadian defender is far to great and any ball hit with pace and accuracy will put Canada in on goal. The blueprint is there for Cameroon, can they execute and keep their World Cup dreams alive?

It’s been a painful experience for New Zealand in the final third in France. No goals from their opening two encounters but the real issue has been creating opportunities. Against the Netherlands, New Zealand mustered up six shots on goal with three on target and created a bunch of high-quality opportunities.

Against Canada, the Football Ferns managed one shot on goal for the entire 90 minutes. A real lack of cohesion going forward and reaching the final third has been a real challenge for New Zealand throughout this World Cup. Let’s delve deeper as to why New Zealand have struggled to go forward and see if there is a pattern which has developed.

Both examples come from the game against Canada where the Football Ferns were put under immense pressure when one of their players had possession. In the first situation, Gregorius has the ball facing her own half and immediately four Canadian players close in. Gregorius has next to now support as the Canadian quartet force her closer to the touchline. With nowhere to go, Gregorius is pickpocketed and Canada continue with possession. 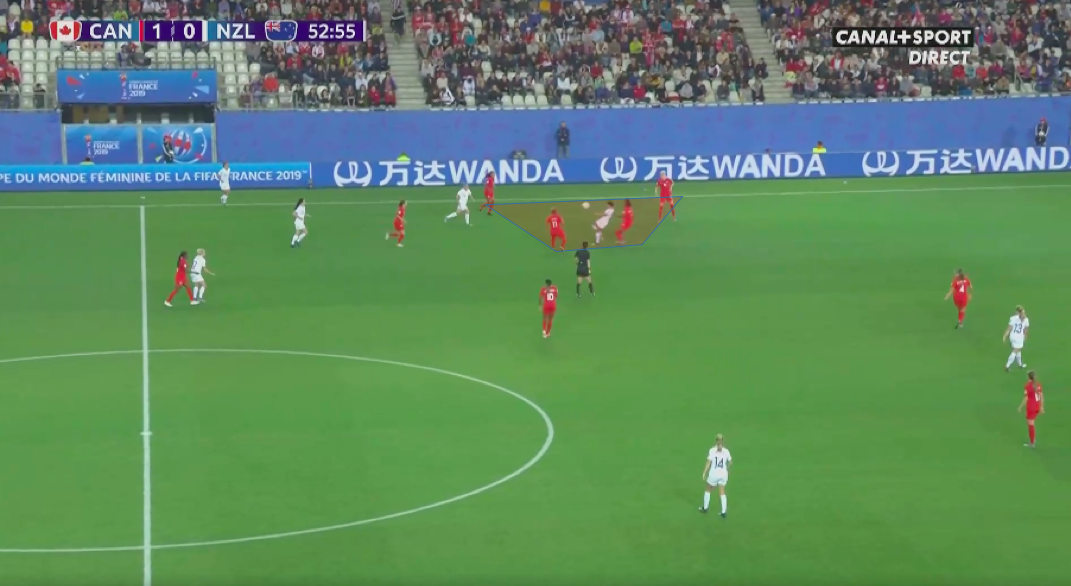 This second scenario is in New Zealand’s half as they look to start a quick counter-attack. Rosie White does well to contain possession and looks to make a diagonal ball to Chance who has got in and behind her defender. A difficult play to play when facing her own goal and when you include the lack of other options available, the high-risk delivery by White seemed her only option. Unsurprisingly, Canada win back possession inside their attacking half and with numbers close to even they can go at New Zealand. 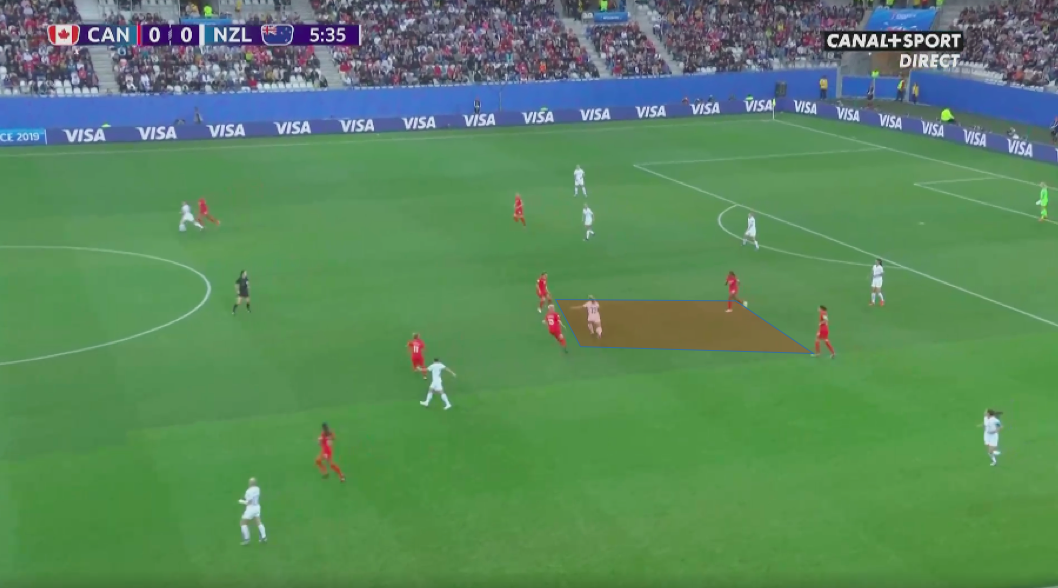 It is obvious that New Zealand have had real issues going forward, but when teammates don’t make themselves as an option it underlies the bigger issues. The Football Ferns inability to retain possession and giving the ball up in inviting areas has showcased why they have one of the feeblest attacks at this World Cup.

The stakes couldn’t be higher for both sides with the potential of qualifying for the round of 16 on offer for the victory. This encounter looks to be different from what has been played from both sides who have sat back. Someone will have to take the assertive approach in this encounter and take control. Cameroon have the quickness and quality to exploit the wide spaces left vacated by the New Zealand defence as explained in our tactical analysis.

It will take a near-herculean effort from New Zealand to get a result in this one. They will need to be brave going forward and exploit the space between the midfield and defence. Can the Football Ferns move the ball with fluidity and precision to exploit this? The clash in Montpellier is set-up to be a tense affair, neither wants to leave the sunshine of France at the end of Thursday.