On Saturday evening, Sporting CP take on FC Porto at the Estádio Nacional in the final of the Taça de Portugal. Following a feisty encounter on the final day of the league season which ended in a dramatic 2-1 win for Porto, Sporting will be hoping to get revenge on their domestic rivals. In the following tactical analysis, we will discuss the contrasting routes to the final for the two sides as well as previewing what is to be expected tactically.

How did they get to the final?

Sporting and Porto are joint-second for the number of Taça de Portugal wins. Both sit on 16 after Sporting were beaten in difficult circumstances by Aves in last year’s final. As Premier League teams do in the FA Cup, both Sporting and Porto entered the competition in the Third Round. Porto easily dispatched fourth division Villa Real whilst Sporting beat third division side Loures 2-1. Sporting again faced Third Division opposition in the Fourth Round as they beat Lusitano Videmoinhos. Porto, however, had a more difficult fixture as they hosted fellow Primeira Liga side Belenenses. Nevertheless, they eased past them 2-0.

In the Fifth Round Porto came from behind to beat Moreirense 4-3 whilst Sporting easily beat Rio Ave 5-2. Surprisingly, Porto faced their toughest test in the Quarter Final when it took them until the 28th minute of extra time to finally see off Second Division Leixões 2-1. Sporting had no such problems as they beat Feirense 2-0. Perhaps unsurprisingly, the two other teams that made up the Semi-Finals were Braga and Porto. A 75th-minute goal by Bruno Fernandes sent Sporting through on away goals against their city rivals Benfica. Porto, on the other hand, easily got past Braga winning 4-1 over two legs.

Porto have performed excellently so far this season in the domestic competitions but one could argue that this season could turn into a ‘nearly’ one for them. They were Champions League quarter-finalists before being beaten by Liverpool. They were beaten on penalties in the Taça de Liga final by Sporting in January. They narrowly lost out on the league title to Benfica, due in part to a 2-2 draw with Rio Ave (a game which they lead 2-0) at the end of April.

They have by far the meanest defence in Portugal having only conceded 20 goals in 34 league matches. They only concede eight shots per game whilst taking 17.2 in the league. In defence, Porto tend to line up in a 4-4-2. 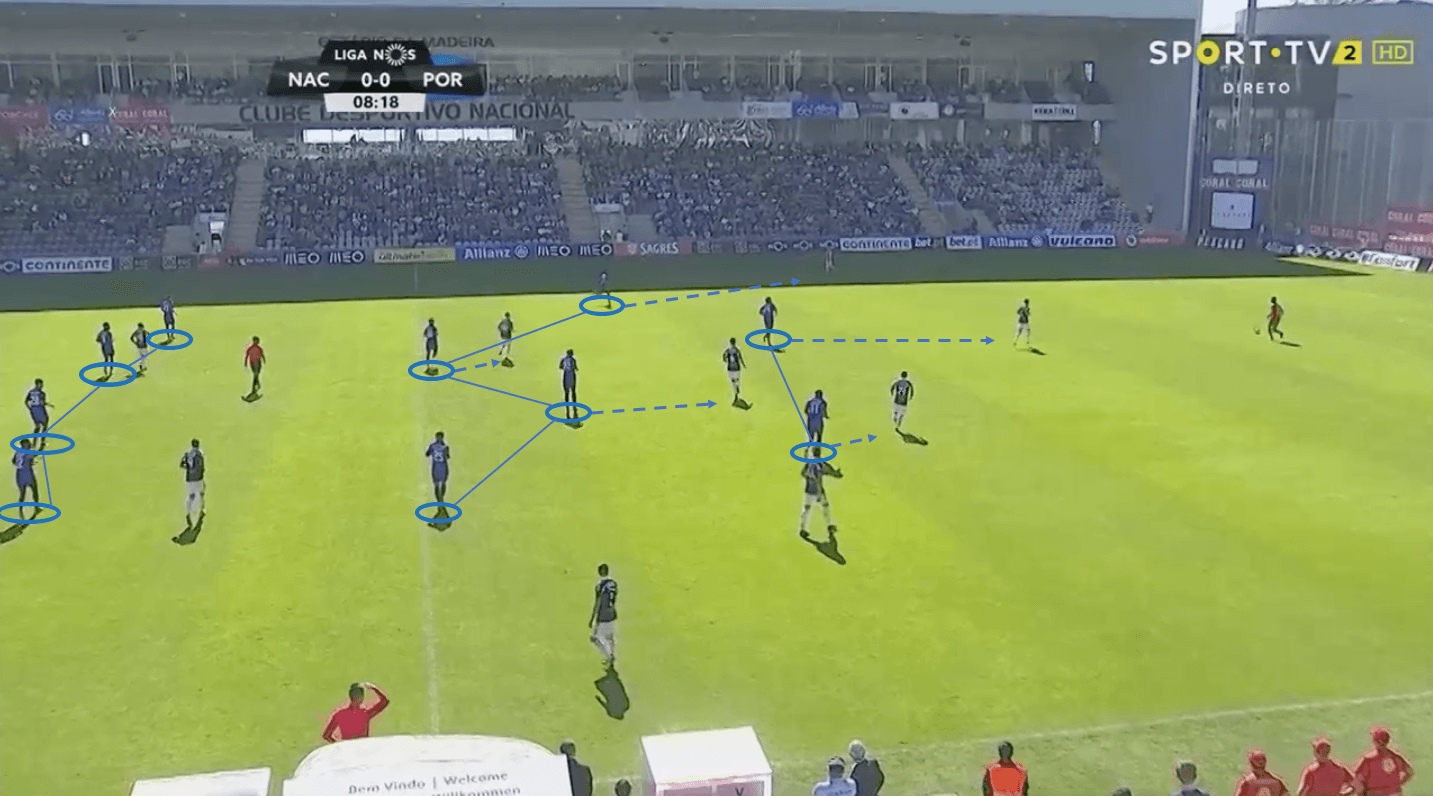 Porto operate in a man-oriented press. As demonstrated in the image above, each Porto player is moving towards the player closest to them to prevent an easy pass from the goalkeeper. In their 4-4-2 Danilo tends to hold a little deeper but also has the licence to press high when the opportunity is there. This, however, can lead to Porto being a little exposed at times. The defensive numbers don’t perhaps reflect this but some avenues for Sporting to expose were highlighted in Porto’s recent victory over Nacional. 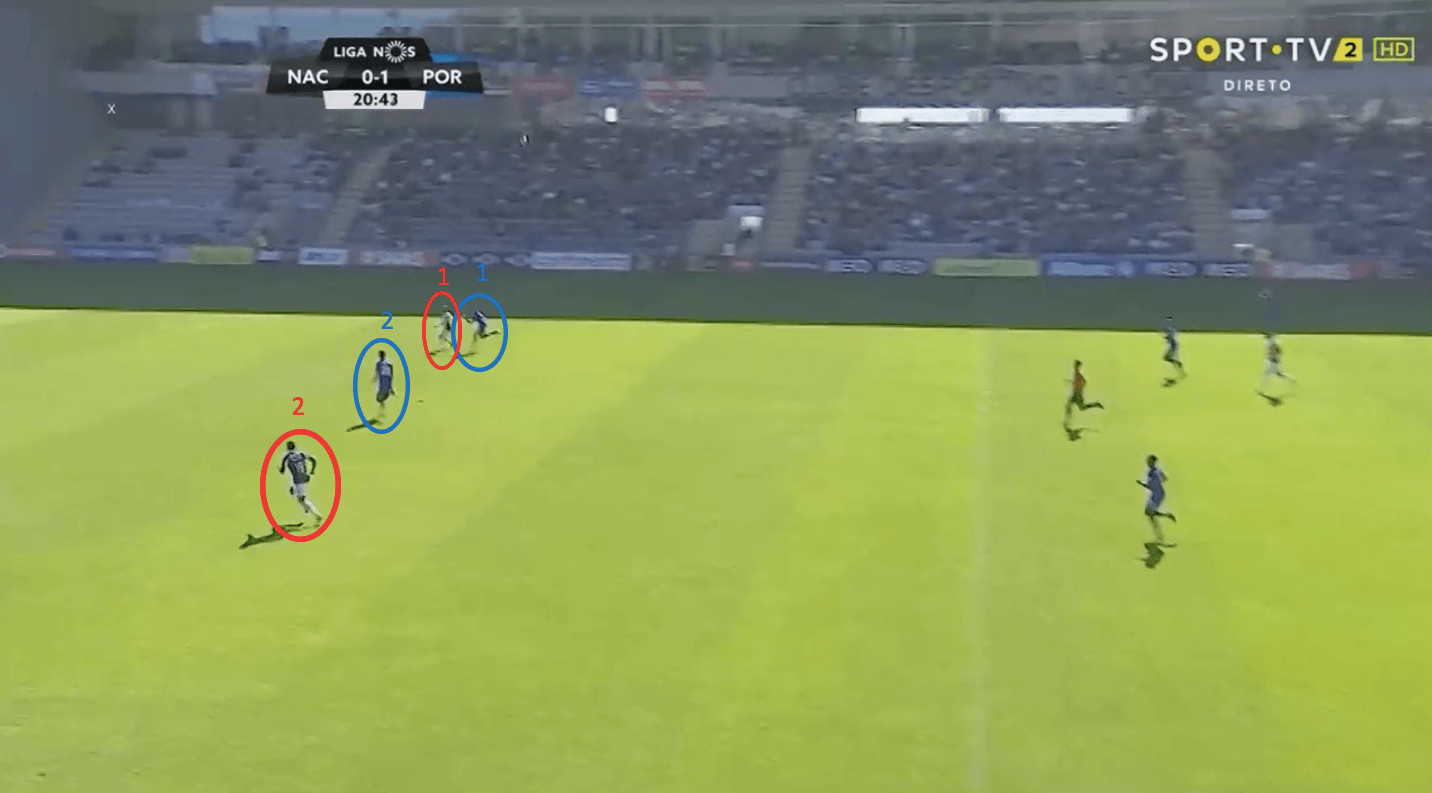 Above is an image taken from the Nacional game. Porto had just turned the ball over in the final third and the Nacional keeper hit a long ball early towards the forwards. Nacional left two attackers up-field at almost all times. There was a huge space between the back two for Porto and the midfield. This sequence eventually fell to nothing due to a poor first touch but had the ball been taken under control Porto would have had a problem. 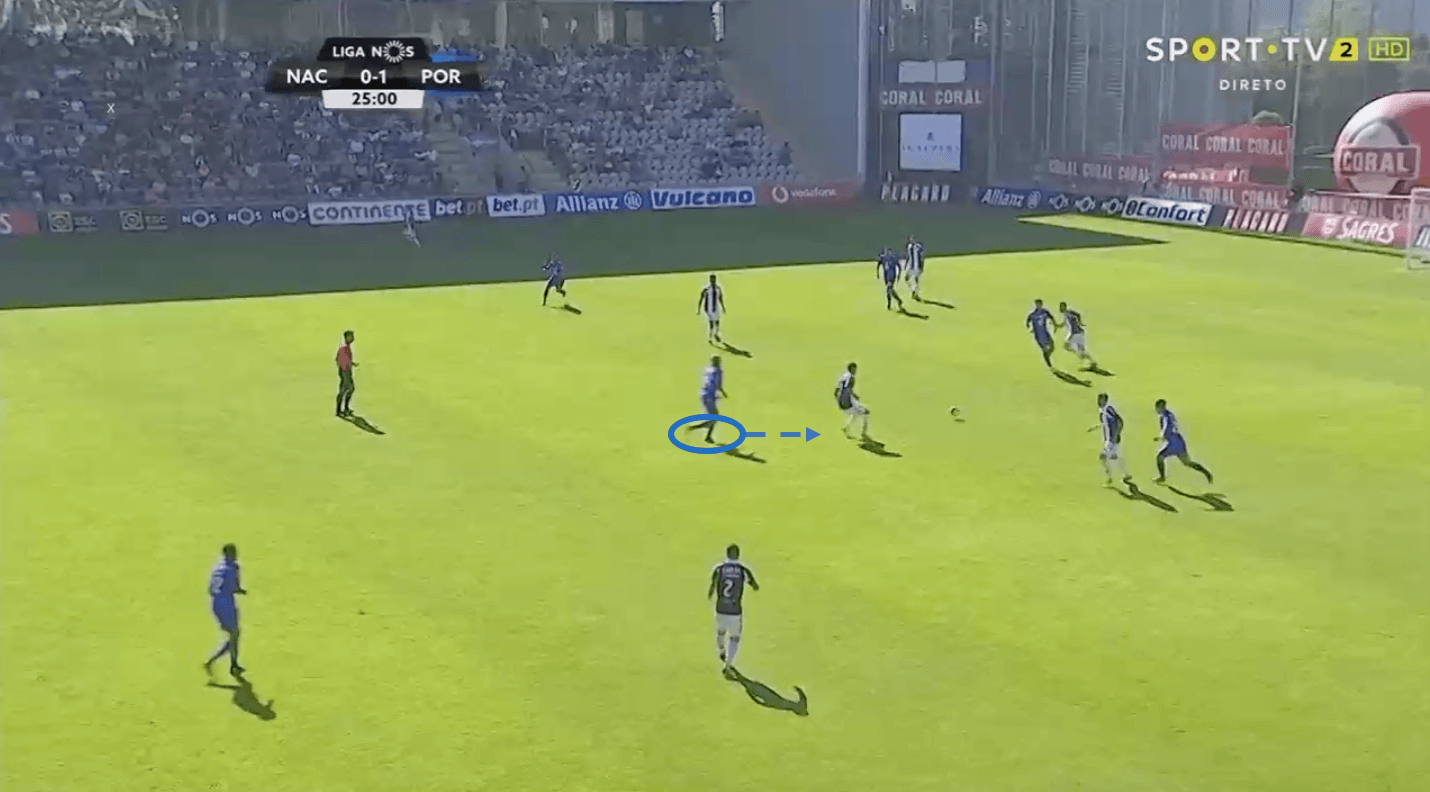 The space to exploit behind Danilo is evidenced above. Nacional are trying to play out from the back and are under significant pressure. It is a 5v5 on the edge of their own box. Danilo senses the opportunity to turn the ball over and moves to pressurise the player about to receive the ball. 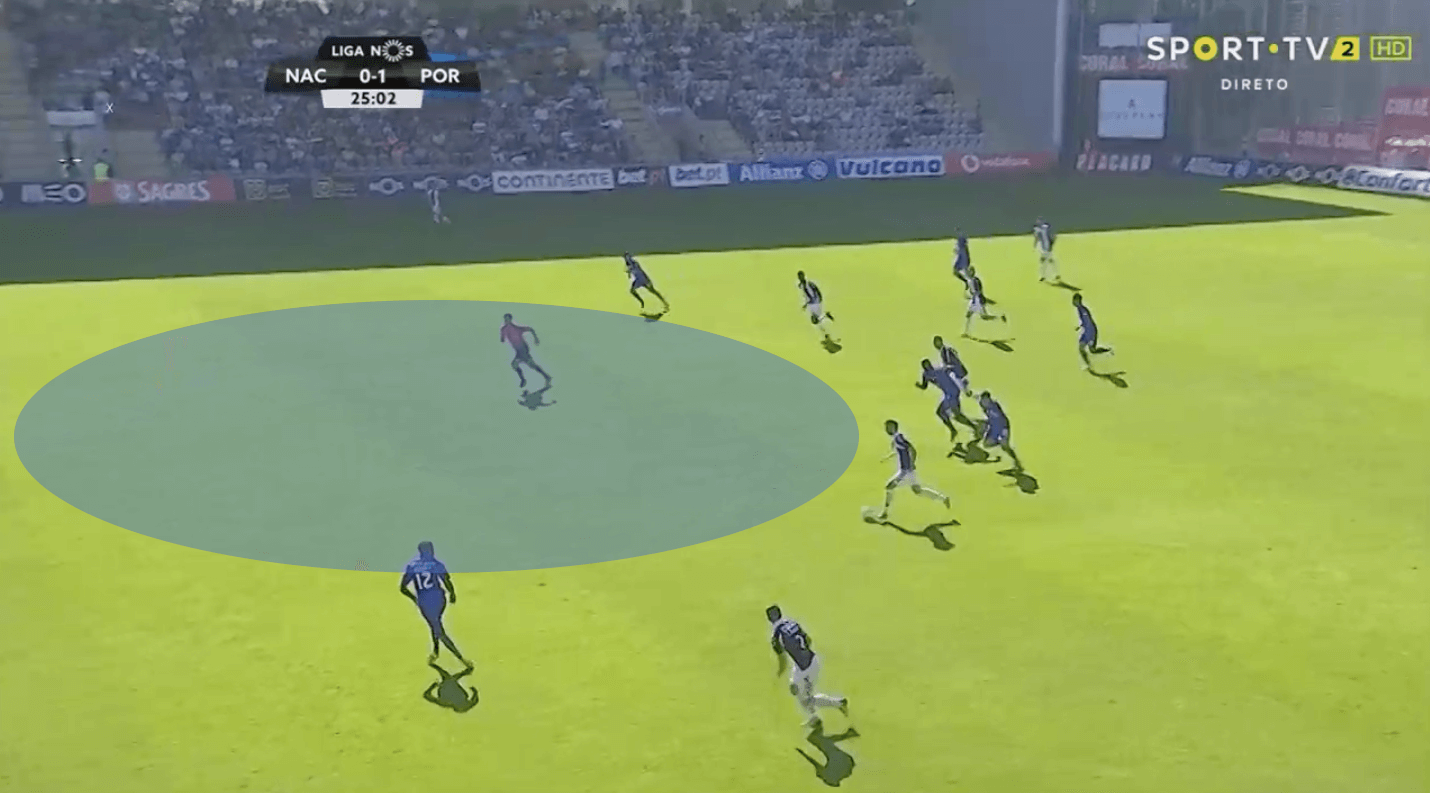 A quick flick around the corner and Danilo is caught completely out of the game. With him being Porto’s deepest lying midfielder, just like that Nacional have the freedom of Madeira in the Porto midfield. Again the move breaks down as instead of carrying the ball towards the goal, the Nacional player hits an ill-advised long ball that goes out of play for a goal-kick. One would expect the midfielders of Sporting to make better decisions in these sorts of situations should they find themselves in them. 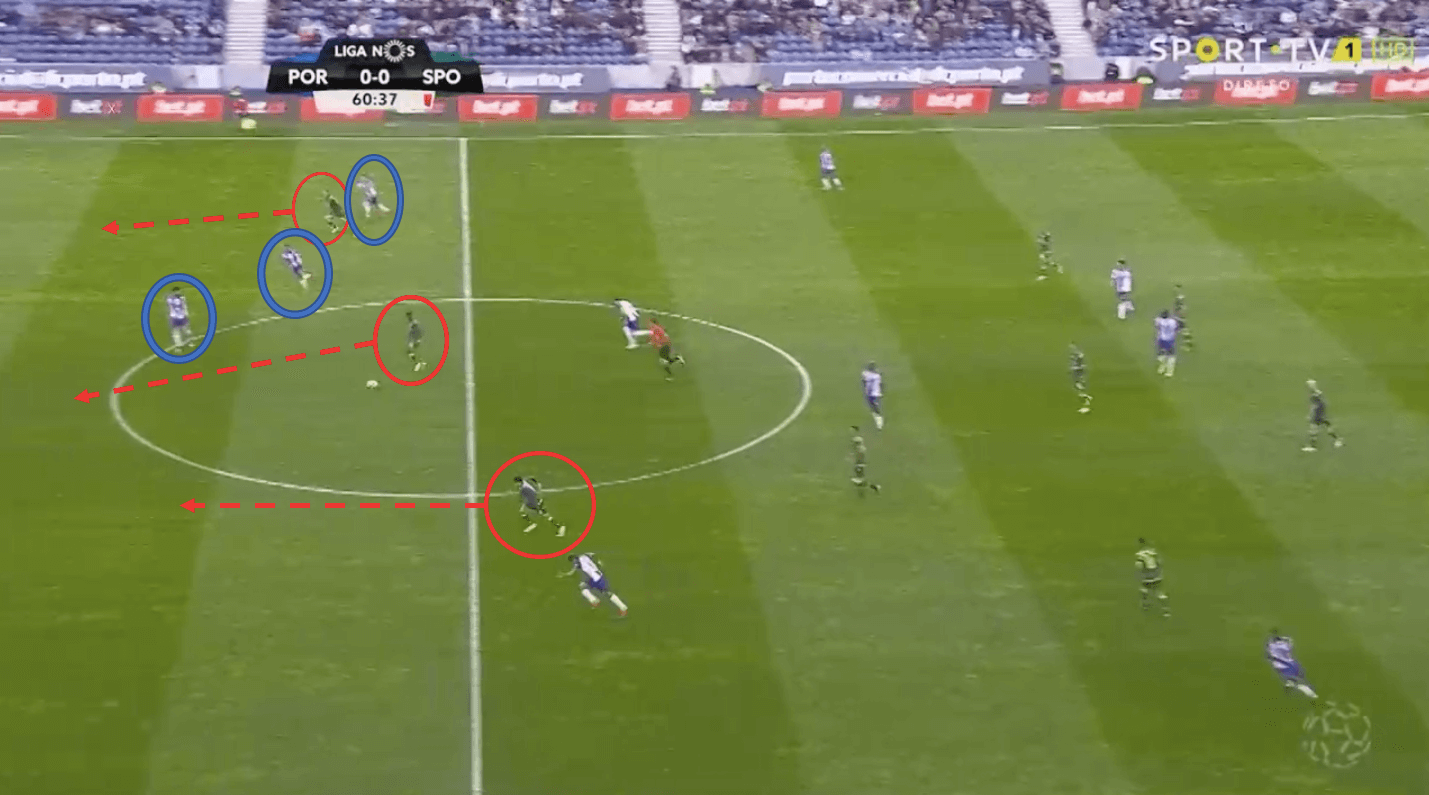 This is exactly what they did in the recent league meeting. Porto lose the ball in midfield with a number of players advanced up the field, including both of their central midfielders. This is the sort of situation that Nacional, in the previous examples, wasted. Instead, Sporting break effectively and within two passes they find the back of the net.

If Sporting can entice Porto into pressing them high up the pitch while leaving Bruno Fernandes high and between the lines, they could really hurt them. Nacional were able to get into the sort of situation we are referring to (below) but weren’t able to work the ball into the red circled player. If they had done so again the back four would have been exposed. 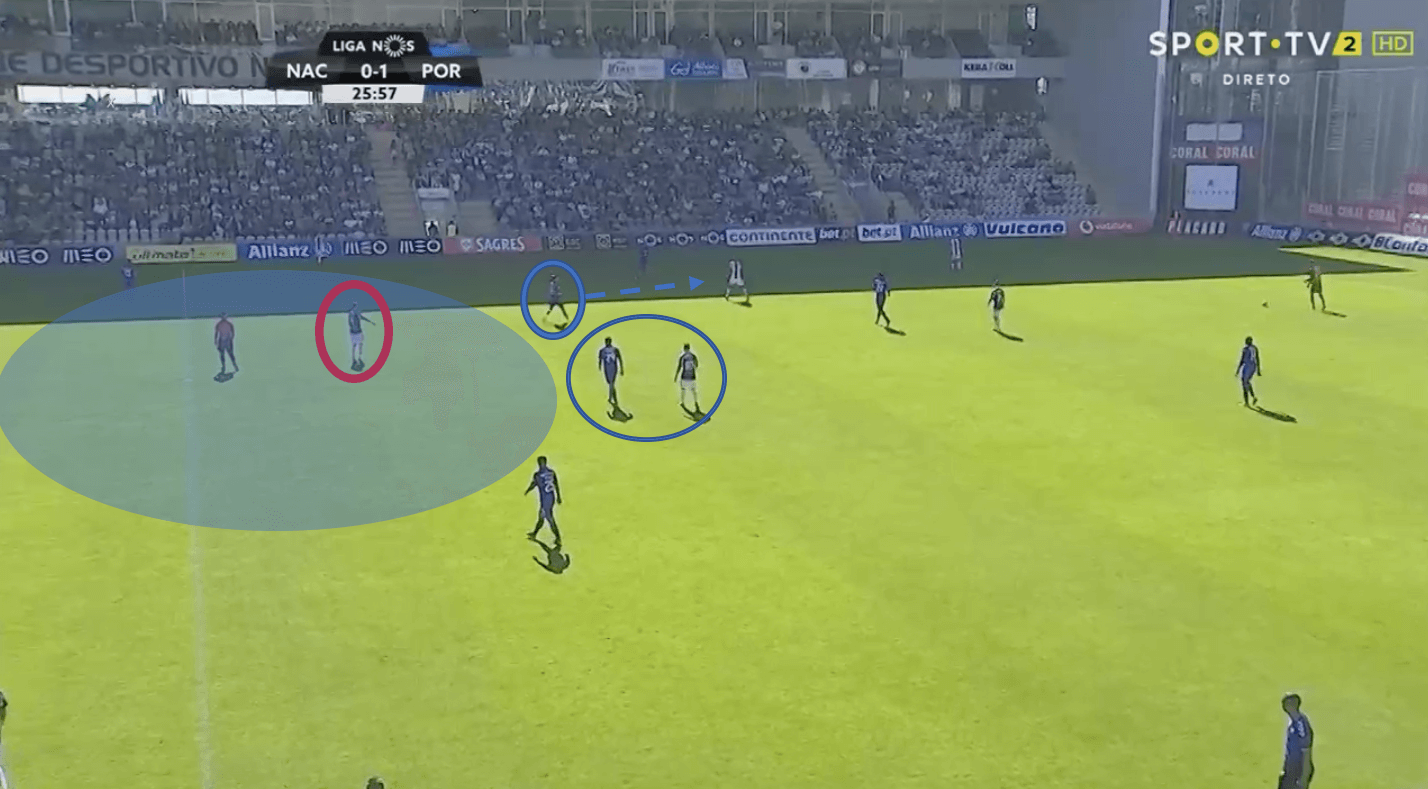 The most interesting and effective aspect of Porto’s attacking play is their exploitation of the half-spaces. Despite setting-up in a 4-4-2, when Porto have the ball the set-up tends to reflect more of a 4-2-2-2 in a similar way to a Watford or RB Leipzig. The two wide-men tuck in and are allowed to move around looking for pockets of space in the final third. The full-backs are tasked with providing the width and putting crosses into the box. The two strikers, whether that be Soares and Marega or Aboubakar, can stay central or run into the channels for through ball from the full-backs or tucked in wingers. Below is an image of how the tucked-in winger and overlapping full-back interact. 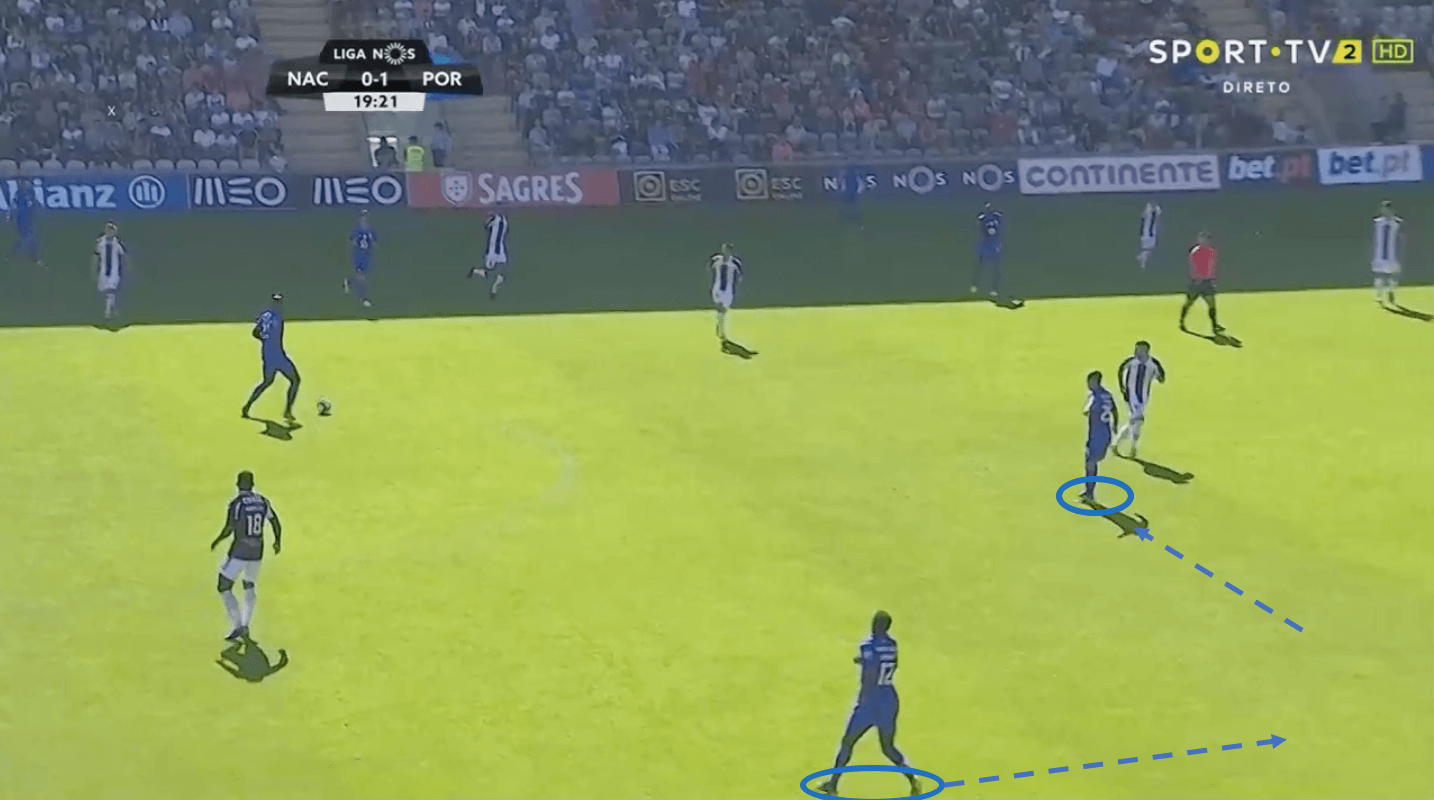 As Otávio comes inside he brings with him a wide-midfielder from the opposition. As he does this he motions to Danilo that Manafá is free and the overlapping full-back makes his move down the wing.

Sporting really are the kings of the third place in Portugal. In four out of the last five seasons, the Lisbon side have finished third behind Benfica and Porto. They ended the season six points behind Porto but also 18 points ahead of Braga. After a season of turmoil off the pitch last year, Sporting will more than likely be content with solidifying third-place in the table. If they can add a cup double to their third-place finish they’ll be over the moon.

Much like Porto, without the ball Sporting hold a 4-4-2 shape. Bruno Fernandes moves from his ‘free-role’ to press as a front two with either Phellpye or Dost, who has been out injured recently. 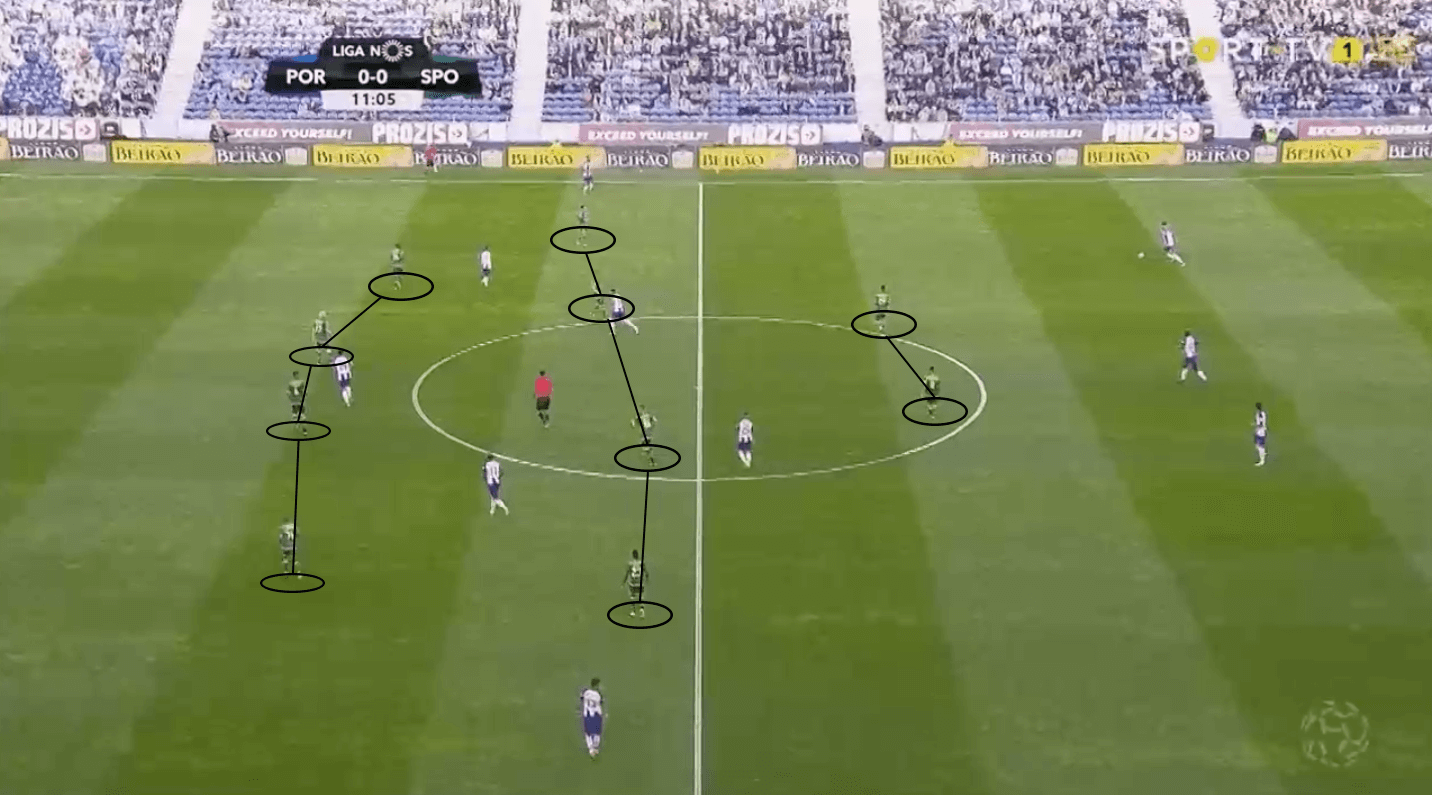 The above image is taken from the recent league game between the two finalists. Here we can see that Sporting are less eager to engage the man with the ball compared to Porto. They are content with keeping a solid structure and attempting to prevent their opposition from playing through the lines too easily. When they lose the ball following a spell of possession however, Marcel Keizer likes his side to counter-press quickly and look to win the ball back as quick as possible.

Keizer likes to set his side up in a 4-3-3, however, in this game against Porto he opted for more of a 4-2-3-1. Usually, he would deploy a single-pivot of Nemanja Gudelj, a ball-progressor in Wendel and finally Bruno Fernandes who is tasked with the majority of the team’s creativity. But against Porto, Keizer played with Petrović alongside Gudelj as he was perhaps wary of Porto’s attacking capabilities.

Sporting tend to operate fairly narrow in attack and look to get numbers around the central striker. 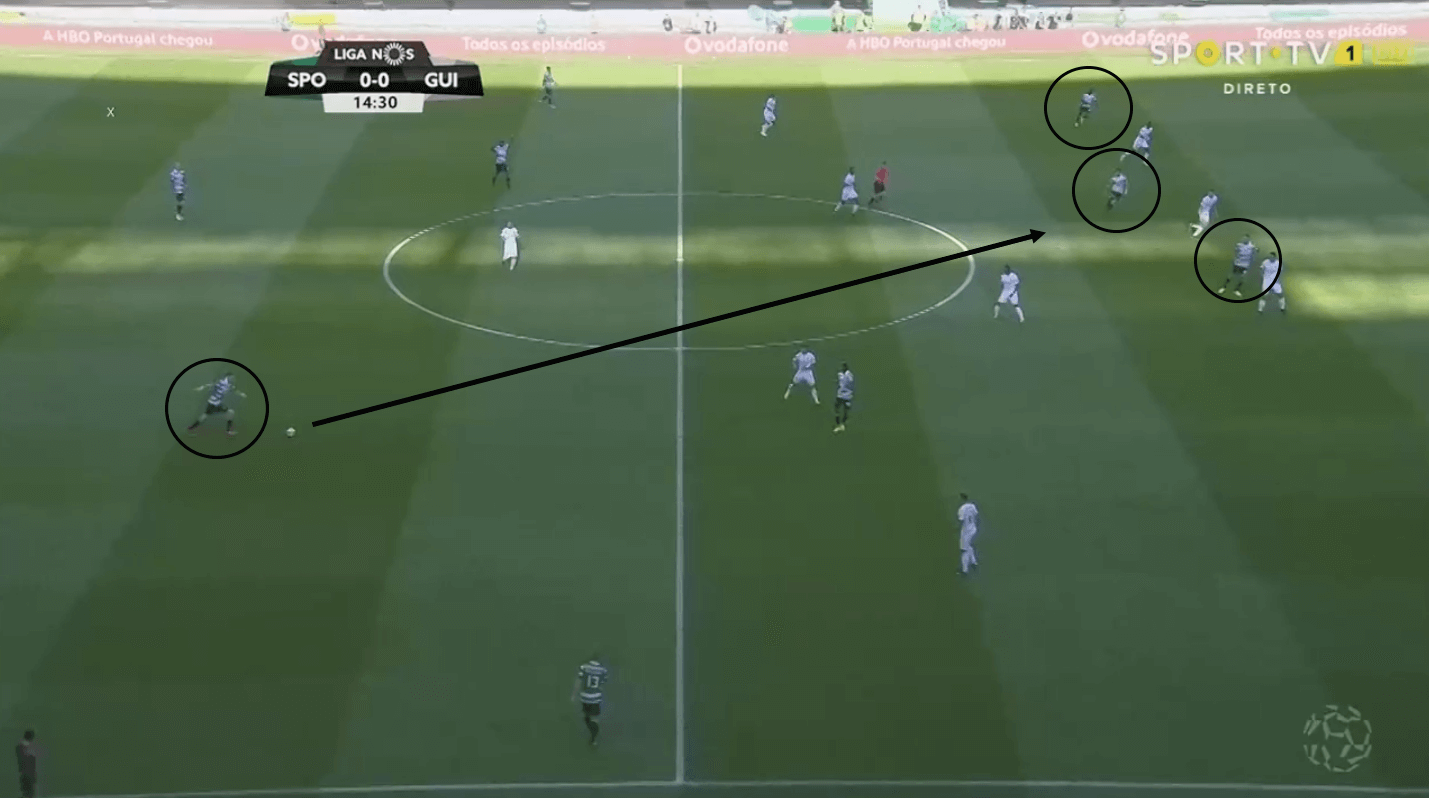 In the image above Coates has the ball at his feet. Sporting have worked themselves into a 3v3 on the last line of the opposition defence. Bruno Fernandes is high and close to the striker as is the winger Diaby. Coates is looking for a direct ball into the strikers. 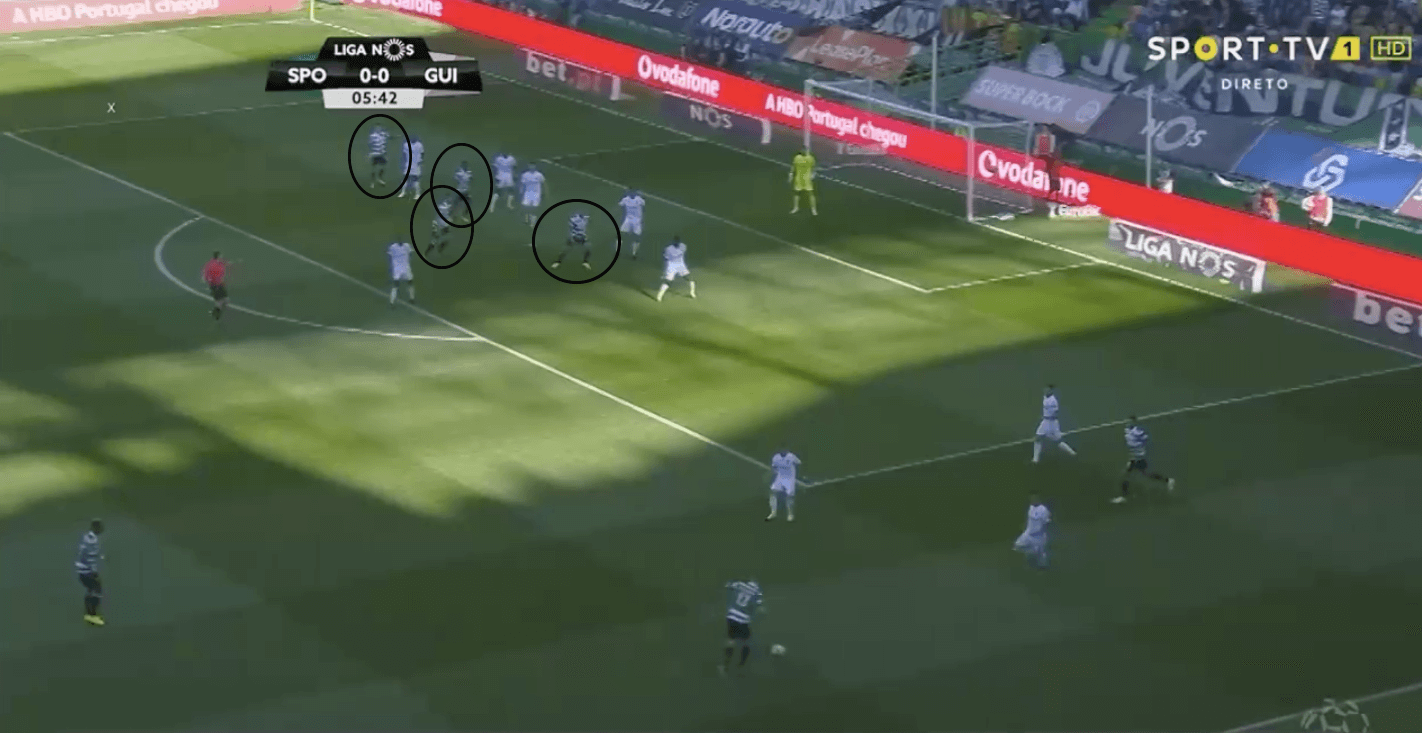 Following spells of prolonged and patient possession Sporting look to put lots of numbers into the box for crosses from deep. In the image above the two wingers, the centre forward and Fernandes are occupying the opposition box. 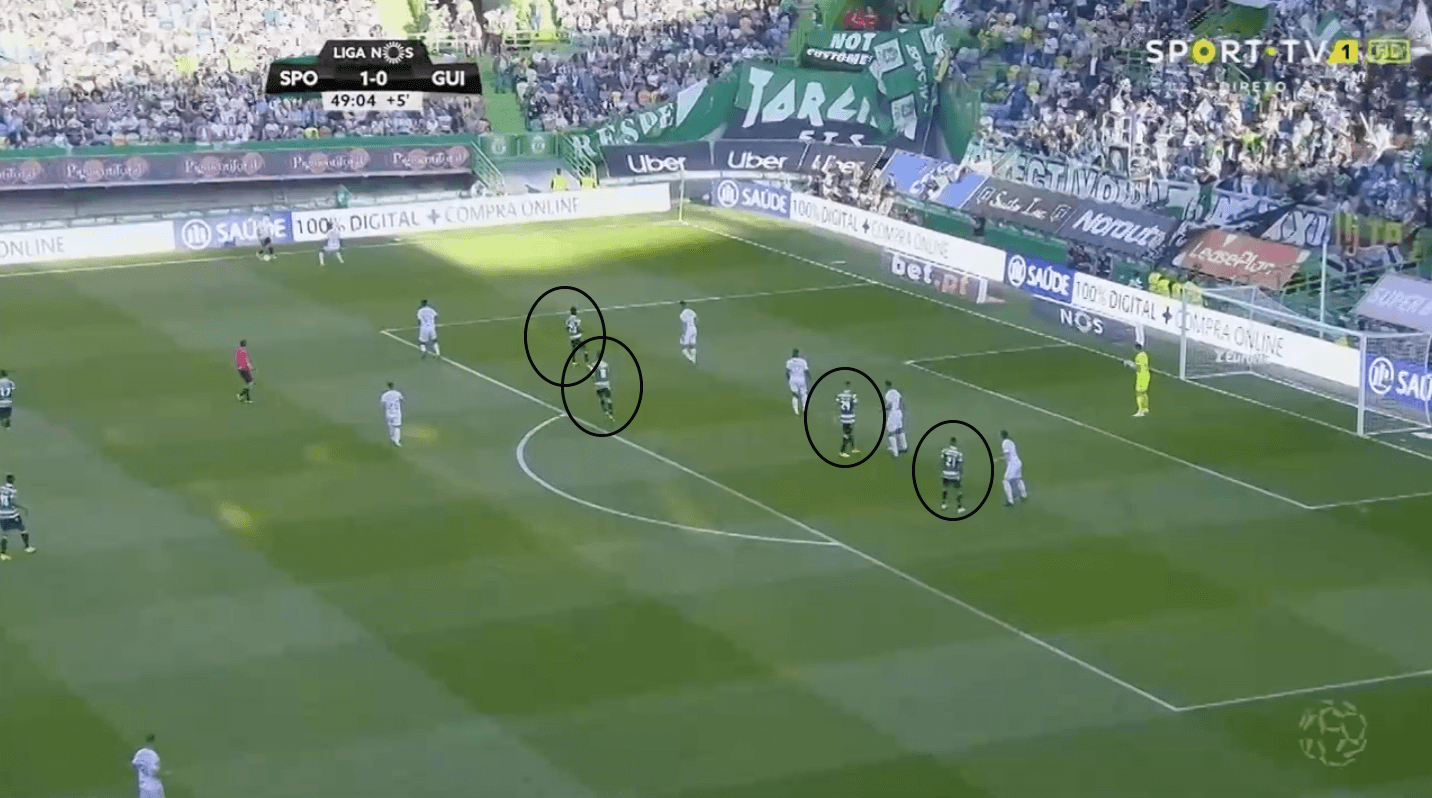 A similar situation is shown above.

One potential weakness to Sporting’s game is the reliance on Bruno Fernades to be creative. He is obviously the sides most talented creator but if he is nullified Sporting could struggle to breakdown an already miserly Porto defence. The defensive aspect of Sporting’s game could also be questioned. Despite having the third best defence in the Portuguese league, Sporting concede 10.8 shots per game whilst they only take 16.2, against a side like Porto giving up over 10 shots a game won’t be a good idea.

Saturday night’s game is set-up to be a classic. Given the tempestuous nature of the league game just last weekend, tensions and passions will be running high. Both sides will be out for revenge. Sporting will want to get revenge for the recent league defeat, whilst Porto will want it for the Taça da Liga defeat in January.

There are gaps to be exploited in both sides. This tends to lead to open and frantic matches, the kind which makes great viewing for a neutral and we’re hoping for something of the sort this weekend.