Eyebrows were raised in November 2018 when Dutch coach Marcel Keizer was announced by Sporting CP as José Peseiro’s successor. Apart from an ill-fated six-month spell as Ajax head coach in 2017, the 50-year-old does not boast much top-level coaching experience on his CV.

That said, he is of course the nephew of the late Ajax legend, Piet Keizer, and was given the Ajax top job on the back of a very successful season with the club’s reserve side, Jong Ajax.

It was most likely Keizer’s links to the Dutch club and its famous philosophy for attacking and attractive football that led to him being chosen by Sporting’s president, Frederico Varandas.

Keizer immediately implemented the classic 4-3-3 formation famously used in the Netherlands, particularly at Ajax. This represented a shift from the 4-2-3-1 system used by predecessors Peseiro and Jorge Jesus. 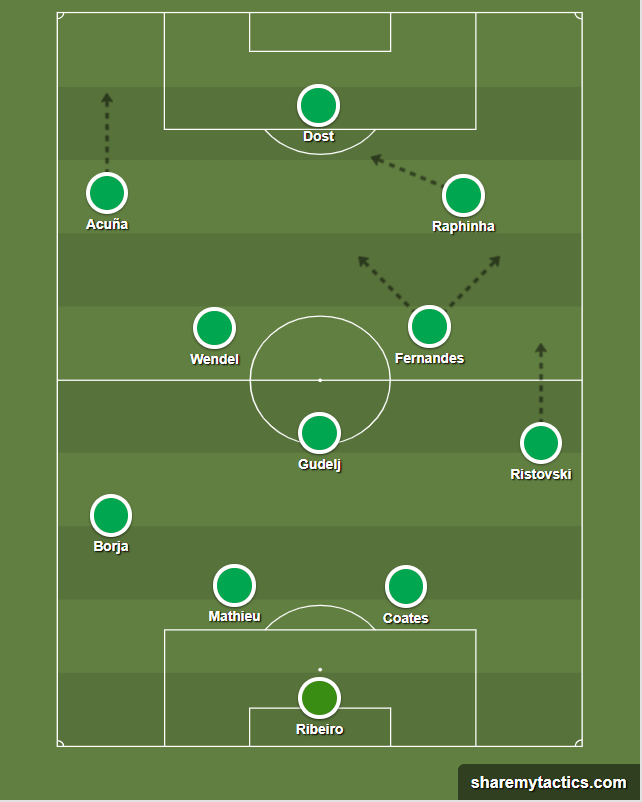 As can be seen in the graphic above, in Keizer’s system the right-sided Raphinha likes to cut inside and take shots at goal. He was brought to the club for this purpose after having scored 15 league goals for Vitória de Guimarães in 2017/18. And as can be seen in the image below, he doesn’t always make the right the right decision as to whether to shoot or pass to a teammate in space, which might explain why he has only managed one assist this season, in the Europa League.

The space wide right left vacant by Raphinha is often occupied by Bruno Fernandes, who has made more accurate crosses (50) than any other Sporting player in the Primeira Liga this season.

Sporting’s 4-3-3 system involves triangular passing moves down the flanks between the full-back, interior midfielder and winger. In the image below we see how Bruno Fernandes passes the ball out wide to full-back Stefan Ristovski, who in turn supplies Raphinha before making an under-lapping run between the defenders. 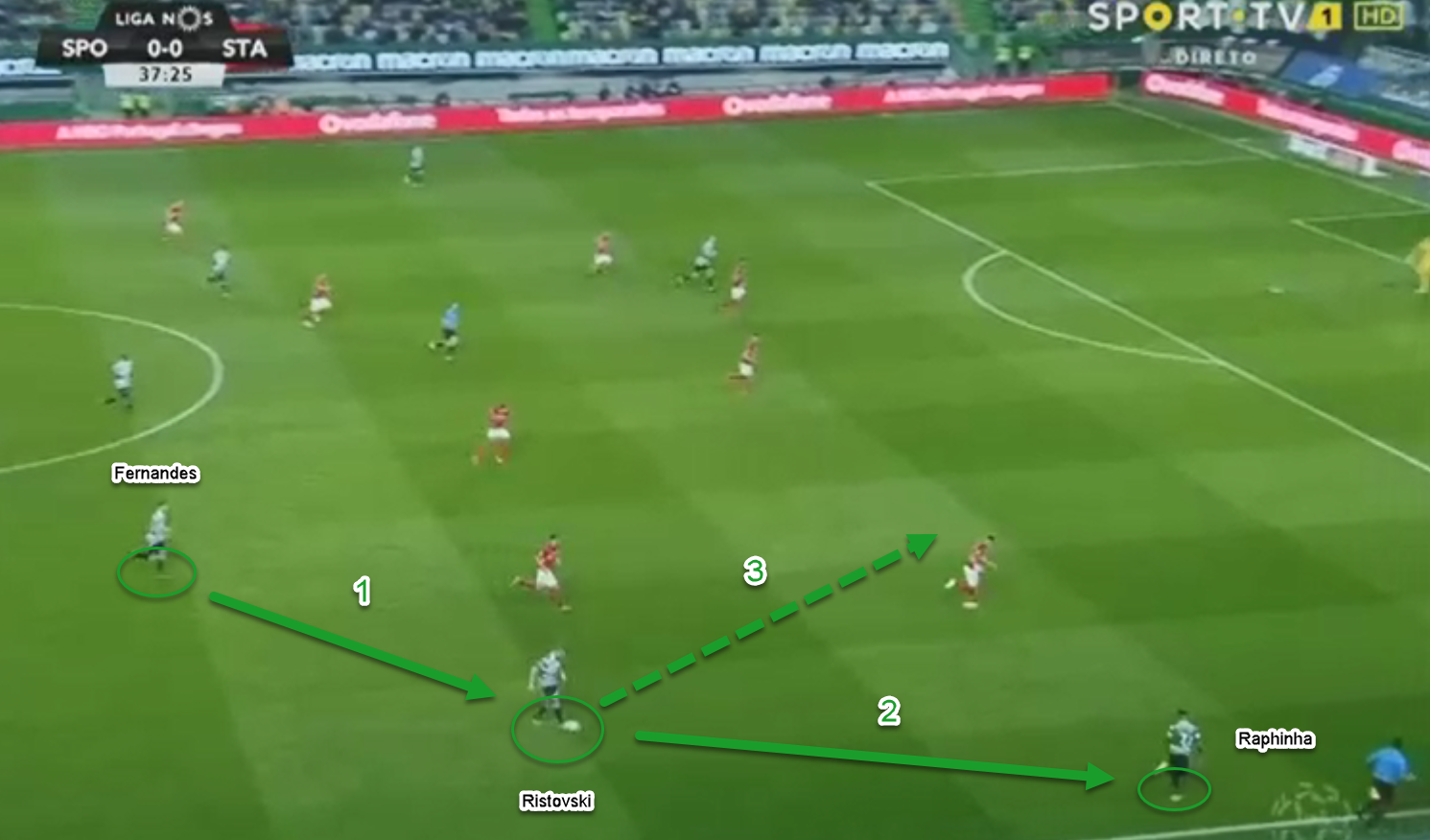 Raphinha then plays a one-two with Fernandes, who makes an overlapping run down the right channel towards the by-line. 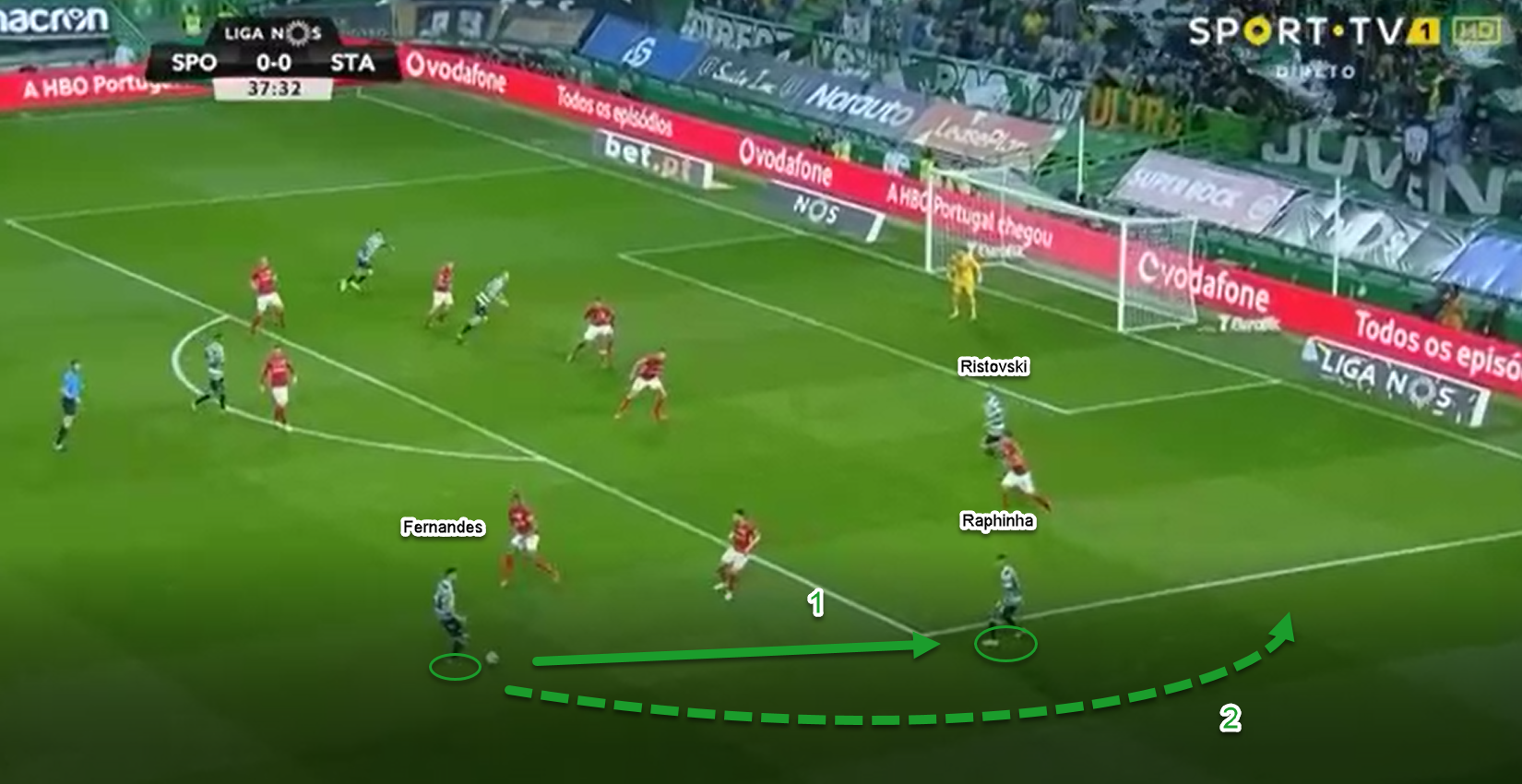 After receiving the ball back from Fernandes, Raphinha elects to swing in a cross aimed at Ristovski. 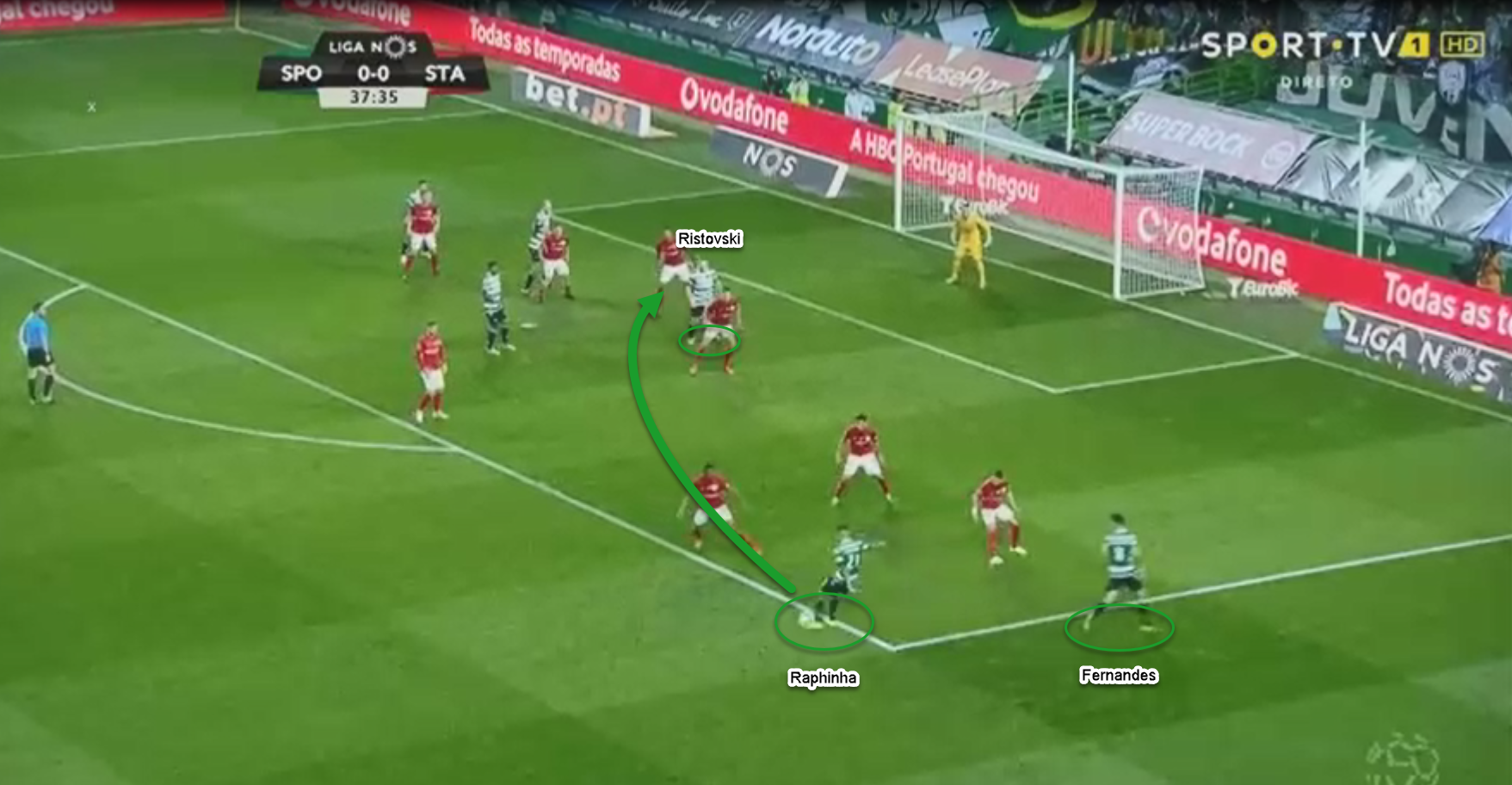 Often when the Macedonian Ristovski gets into advanced positions like this, left-back Cristian Borja tends to stay back, forming a back three, with winger Marcos Acuña and Ristovski providing width in the attack. The same effect can also be achieved on the other side of the pitch by using Acuña as an attacking full-back down the left (he is comfortable in either position) and keeping Ristovski back.

This replicates the 3-4-3 system used by Kaizer in the 3-0 home victory over Braga in February as pictured below. In this game, Acuña and Ristovski were used as wing-backs, whilst Fernandes was positioned further forward than usual as one of the front three. 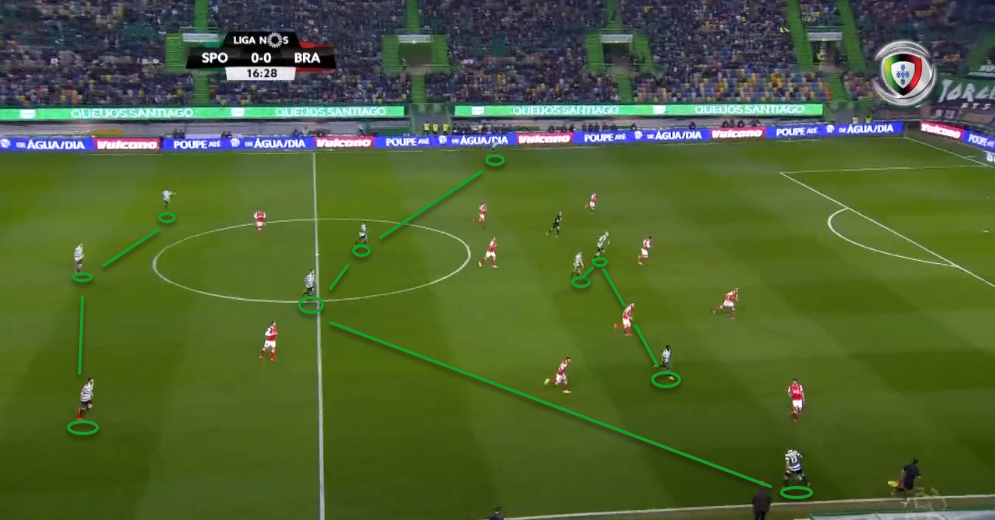 Although the Dutchman soon abandoned this formation after failing to win against Villarreal and Marítimo, it is clearly something they have been working on on the training field and gives them the flexibility to morph between formations mid-game.

With Argentinian midfielder Rodrigo Battaglia ruled out with injury for the rest of the season, Keizer turned to ex-Ajax man Nemanja Gudelj as his single pivot in front of the back four.

Gudelj is one of the most accurate passers in the division, with an average of 88%, and is closely followed by his midfield partner Wendel (86%).

21-year-old Wendel has been one of the stand-out players of Keizer’s reign so far. Barely given a chance in the first team last season, the Brazilian has made the left-side interior midfield role his own.

As the heat map above demonstrates, Wendel is a very mobile player who likes to carry the ball forward, though this happens predominantly on the left-hand side of the pitch. In contrast, Bruno Fernandes is given a much freer role than his position on the right-hand side of the three would suggest.

The Portuguese international is given the freedom to roam all over the pitch to find space, something which is necessary if he is to get into the positions to put crosses into the box. As can be seen from the heat map below, he takes most of his touches in the half spaces, whether this be on the right or left-hand side of midfield.

Keizer can constantly be heard to refer to his side’s passing game when speaking in press conferences and interviews (which he conducts in English). As you would expect from a coach with his background, he likes his team to be patient in possession and build out from the back, even if this means playing more passes.

He has had to coach this into them gradually as the players resist the temptation to launch vertical balls up to the wingers at the earliest opportunity, a common trait among Portuguese sides.

When not in possession, Keizer likes his side to press immediately in order to regain possession. Dutch-Serbian midfielder Gudelj revealed in an interview that Keizer wants his players to win the ball back “within five seconds”. An example of this enthusiasm to win the ball back can be seen in the image below, where three Sporting players attempt to close down the same opponent.

Stastically speaking, Sporting are a team that rely heavily on two particular players: Bruno Fernandes and Bas Dost. As can be seen below, Dost is second in the Primeira Liga goalscoring charts, with Bruno Fernandes not far behind him. Together they have scored 27 of Sporting’s 50 league goals so far this season.

What will be of concern to Keizer is that after these two players, Sporting’s next highest goalscorers are Raphinha, Mathieu and Cabral, each with only two league goals to their names. However, it must also be mentioned that Nani chalked up seven goals before leaving for MLS side Orlando City in February.

When we look at the sources of Bas Dost’s goals, we come across a worrying trend. Of his 14 league goals this season, eight have come from the penalty spot. And as for his six goals from open play, four were assisted by Fernandes whilst two came from crosses from Marcos Acuña.

Some critics have claimed that this is because Jorge Jesus’ Sporting team was built to play to Dost’s strengths by getting plenty of crosses into the box. However, the stats show that this current side crosses the ball an average of 23.5 times per game, compared to 23.9 times per game last season, which is hardly a major decrease.

It surely doesn’t help that the other attacking players lack Dost’s height and aerial ability, meaning that he is really the only player likely to beat an opposition centre-back in the air from an incoming cross. This in turn reduces the Dutchman’s chances of getting on the end of knock-downs from teammates.

Whatever the reason for Dost’s relative lack of goals, the far bigger concern will be why it is only he and Fernandes who seem to be scoring. And the assists charts paint a similar picture, with Fernandes (10) being followed by Diaby and Acuña (both with three) since Nani left the club with four assists to his name.

When you have a player as good as Bruno Fernandes in your side, some will inevitably label you a one-man team. This would be harsh on Keizer’s Sporting however, as Fernandes combines well with his teammates who appear to be on his wavelength and make intelligent runs off him. The sad reality for Sporting fans is that the former Sampdoria man has demonstrated this season that he is simply too good for this league.

The bigger concern for Marcel Keizer will be how they can vary the type of goals they score, as the tried and tested method of crossing the ball to poacher Dost hasn’t been producing the results they would have hoped for lately.

In any case, Keizer’s methods do seem to be taking effect, and he has already picked up a trophy in the Portuguese League Cup. Whether he will be given the time and resources to build on that success in the future is another matter though, and given the behind-the-scenes goings-on at Sporting there can be no guarantees.