How Low took Germany from disciplined to dynamic

For Joachim Low’s Germany, 2018 was a very poor year. Disaster at the World Cup in Russia was followed by defeat in the UEFA Nations League. This called for Low to pick a new side for the start of the Euro 2020 qualifiers. There was no inclusion in the squad for the World Cup-winning Bayern Munich trio of Thomas Muller, Jerome Boateng and Mats Hummels. However, Low brought in youth such as Niklas Stark.

Standing in their way was the team who battered the Germans 3-0 at the Johan Cruyff Arena in October. The Netherlands, who have fantastic youth coming through their sides such as Matthijs De Ligt and Frenkie De Jong, had qualified for this summer’s Nations League finals in June. Since not qualifying for last year’s World Cup, they have been in quality form ever since. Captained by Liverpool’s Van Dijk, there is a good argument the Dutch can win the Euros in 2020. In this tactical analysis, we will look at how a new look Germany beat the in-form Dutch. 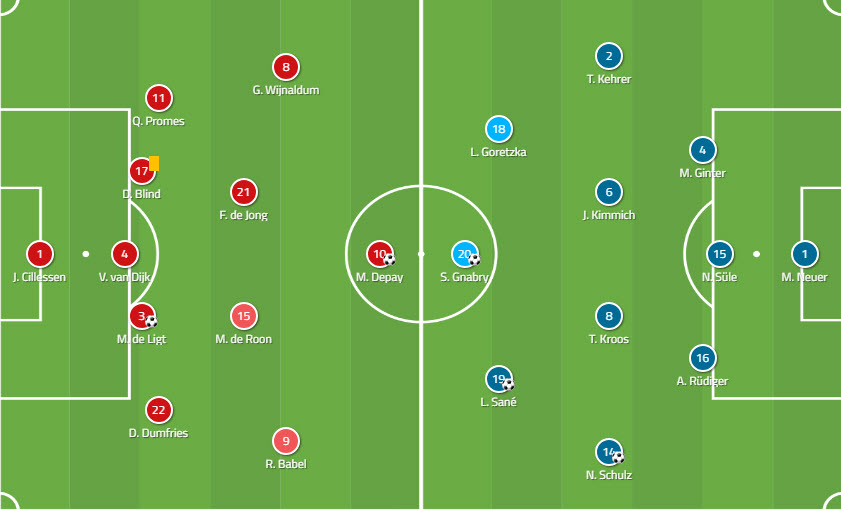 One would associate discipline with German sides in the 2010s, normally with four defenders and two holding midfielders. This performance was completely different. Taking inspiration from the Bundesliga, Low went for a 3-4-1-2 which has been seen from managers such as Frankfurt’s Adi Huttler and Hoffenheim’s Julian Nagelsmann.

Key to success was left wing-back Nico Schulz who plays this system under Nagelsmann. On the other side, PSG wing-back Thilo Kehrer started. Serge Gnabry, Leroy Sane and Leon Goretzka played as a front three.

The width of Germany

On the team-sheet, Germany played with three at the back. But one of the first signs of Joachim Low’s team changing from the disciplined side that won the 2014 World Cup is the positioning of centre half Matthias Ginter. In the below image we can see Ginter high and wide on the pitch, playing more of a full-back role than a centre-back role.

This benefits Germany as not only does it create space for them to play out from the back, but it also lets Kehrer push further up the pitch. In possession, each wing-back can take up more of a wide and attacking winger role.

If you look at the pass map below you can see Ginter (#4) playing high and wide. What is also important is the number of solid lines coming from Ginter. The width he provided helped Germany to play out from the back. He did this by linking up well with Kimmich (#6), Sule (#15) and Kehrer (#2).

The combination that Ginter had with Kehrer allowed the two to rotate, which ties in with my second point on the new German style that I will touch on later. This allowed Ginter to get into areas where he could have an impact in the final third and create chances.

If you look at the pass map you can see that Ginter combined with the attackers as well. This helped create chances for Germany. In the below image, we see Ginter taking up a right midfield position, so he can play the ball into the box.

The Netherlands began the game by trying to press Germany into high and wide areas on the pitch, such as below. However due to the wide players that Germany had available it was tough for the hosts to overload these areas. Therefore, their press was not that successful, allowing the visitors to play the ball into central spaces on the pitch which were left empty due to their press.

Germany stretched play in the lead-up to their opener with Schulz providing the width on the right-hand side. This brought problems for Holland’s wing-back Denzel Dumfries. The width of Schulz made it tough for him to cut off the passing line for Sane but still effectively mark Schulz. Therefore it was easy for Schulz to receive the ball on the wing.

Once Schulz had the ball Sane made an excellent run to go from a wide space to a central space. However, this was allowed due to poor communication between De Ligt and the rest of the Dutch defensive line. As we can see below, he is too deep compared to the rest of the defenders, and thus plays Sane onside and gives Schulz space to go deeper on the wing.

If De Ligt has been higher, Sane and Schulz would have had had to be deeper which would have limited the chance of Schulz getting the ball. However, they would have been vulnerable to the long ball to Sane.

Below is a prime example of the rotation between Goretzka and Gnabry. Here Goretza plays the ball to Kehrer and as it happens, Gnabry makes a run to drag out Van Dijk. This creates space for Goreztka to exploit between Van Dijk and De Ligt.

The rotation happened in the lead up to Gnabry’s goal to double the German’s lead. Sane made a run in deep to let the Bayern Munich winger make a run towards the left-hand side. So when Rudiger played in the ball to Gnabry, he is away from the Dutch defence and is in space.

Van Dijk looks to not dive into Gnabry and allow him space. He has not been beaten on a one-on-one situation for Liverpool this season. However, fantastic feet allow Gnabry to touch the ball away from Van Dijk and have a shot on goal – and what a shot it was. The former West Brom loanee showed in the game that he has the talent to be the very best for both his country and Bayern.

In the first half, Germany were by far the better side. However, a change in focus in the second half for the Netherlands and Steven Bergwjin replacing Ryan Babel led to them having 1.98 expected goals compared to the Germans’ 1.1. If you look at the German pass map from above, you see that at the majority of the time Germany only had two players back. This was brilliant for the Dutch counter-attack.

Even in the first half, the Netherlands had many chances to score from their counter. The below example with an unmarked Babel on the left wing shows a real chance to equalise in the 25th minute.

Therefore in the second half, when the Netherlands pushed up more, Germany had to change their shape to prevent the Dutch from exposing the gaps in the German defence. You can see below the amount of Dutch players tight on the left-hand side. However, Bergwjin stayed out wide on the right to provide width.

In the first half Germany stuck to a back three, but this changed to a back five in the second half due to the Dutch pressure. This meant that they were not as effective in possession, as they did not have the players in such advanced positions they had before.

This caused problems for Germany as the Netherlands could push them back. Also with their superior height advantage, the hosts could create chances in the air. With Van Dijk and De Ligt the targets for Holland, one was bound to score. This happened early in the second half when De Ligt made an excellent run to connect with Depay’s cross to make the score 2-1.

Then in the 63rd minute, the Dutch pressure on the German defence led to a scramble in the penalty area. Wijnaldum did fantastically to shield off Rudiger to give Depay space to equalise.

This shows that despite the Germans’ width causing the Netherlands problems in the first half, Low’s new system has a flaw. Under Dutch pressure, Germany had to fill the gaps they had left open in the first half, meaning that they couldn’t attack at the same rate.

However when Low brought on Manchester City midfielder Ilkay Gundogan and Dortmund’s Marco Reus, the Germans changed their shape to a 3-4-1-2 which worked a treat for them. Reus played up top with Sane and Gundogan played in the number 10 role.

This gave Germany more passing options in the last minutes and led to Schulz’s winner. It also showed the rotation we had seen in the first half. Reus makes a run from right striker to the left wing leaving Schulz space to run into towards the penalty area.

When Gundogan receives the ball, Reus makes a run towards the by-line and Gundogan plays him in. Receiving the ball in a winger position, Reus plays in Schulz who finishes his shot bottom corner to score the winner.

Low has had an impact on a side who have had a terrible few run of form. Changing the side from disciplined to dynamic, Low has brought youth and energy to a side who may reach the peak they hit in 2014. Next up is Belarus and Estonia in June as Low aims to expand on his new formula. Meanwhile, the Netherlands are off to Portugal this June to face England in the semi-final of the inaugural UEFA Nations League.