Finally, comes the day for France to reinstate from what they were rendered two years back in the final of Euro 2016, but this time in FIFA World Cup 2018 and against the most powerful underdogs, Croatia, who have just reached their first ever World Cup Final. The opponents are famous due to their strongest, unmatched midfield in the tournament and the same has helped them to maintain and restore their balance even against the sides like Argentina. This could cause Deschamps’ men struggle. Let’s see how France can upset the Croatian midfield.

Like every time, Croatia will dominate their central presence against France as this is their favourite region to achieve balance. They have Brozovic in the defensive midfield, who is the base of Croatia’s zonal marking in the central region. With him, the Croats can safely form a pressing block at the active flank to isolate their opponent with the ball and recover from him. This defensive set up allows them to concentrate around the opponent with the ball in any region and win possession since they can shift the recovered ball to the centre to have it circulated to the more favourable side by the midfielders. The French, who initiate attack more through the flanks, are likely to be isolated there against Croatia’s centrally rooted defensive block.

The role of Mbappe is highly important here which would force Croatia to leave such gaps. The 19-year-old is a young, agile, robust body endowed with a catastrophic speed and an extraordinary finishing talent.

His wide presence also makes the fullback Pavard to remain wide thus sometimes being directly connecting to Mbappe during attacking transitions. This empowers France at their right width – something which will make Croatians worried and cautious. Since Croatia defends in blocks, it will definitely arrange its defence in a block to restrict any space for Mbappe. But if the midfielder is given a free role to position himself tactically so as to congest Croatians at the ‘wrong’ region in a closer block due to his dangerous runs, this would create space for the French players in the uncongested regions, especially for Pogba. This way, by forcing Croatia to overly concentrate their block, France can upset Croatian midfield. Mbappe just did the same against Belgium creating space for his teammates in the deeper regions.

All France has to do here now is to quickly transit the play across the planes. Kante can play another strong part here by shifting the ball from the concentrated block to the favourable regions. He is a key transitional element of France’s talent pool. Kante, Mbappe, and Parvard can form an effective counter-pressing structure this way which may cause even Rakitic to pull out of his central zone to concentrate the active flank (see the passing map below). Depending on the nature of play and the positional arrangement, this structure would create space in at least one of the highlighted regions in Croatia’s positioning map above. And that’s how France can upset Croatian midfield. 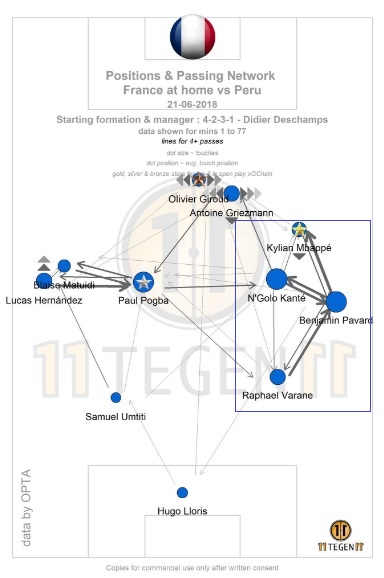 Given the strong aerial sense of Giroud, playing long balls is France’s part of attacking plan. But Croatia’s rigid defence could win possession on the first or second balls. Their midfield structure enables them to form pressing block around the target opponent. To tackle Croatian defensive blocks, another counter-pressing tactic for France can be to stretch these blocks like the way Russia did. Russia played long balls against Croatia in the quarterfinals and to make sure they win and retain the first ball, the players got positioned distantly, stretching their marking opponents far enough to have enough gap within the pressing block of Croatia. Then within that block, one or two Russian players dropped to pick the first ball won from their teammates while cutting out of the block. 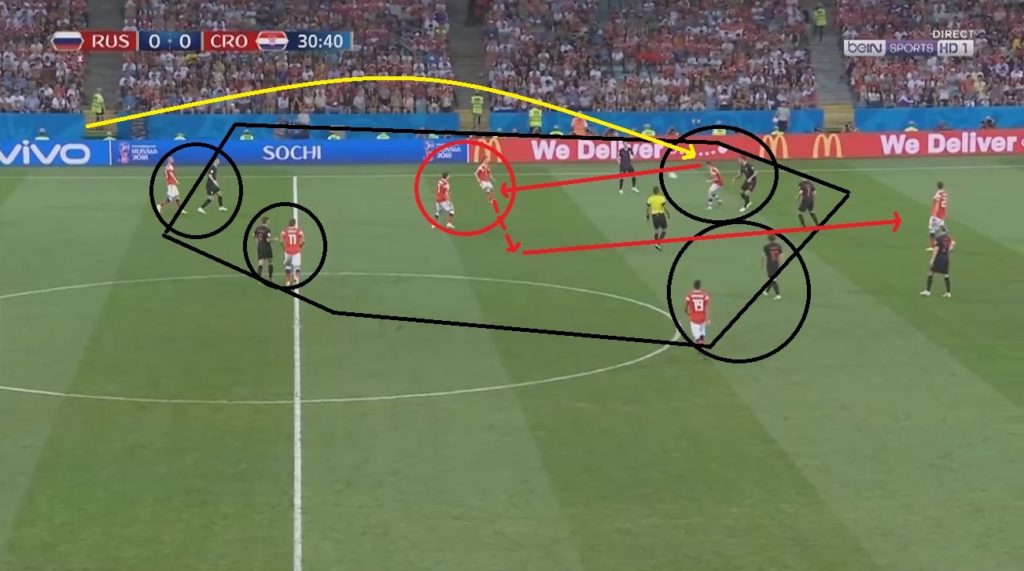 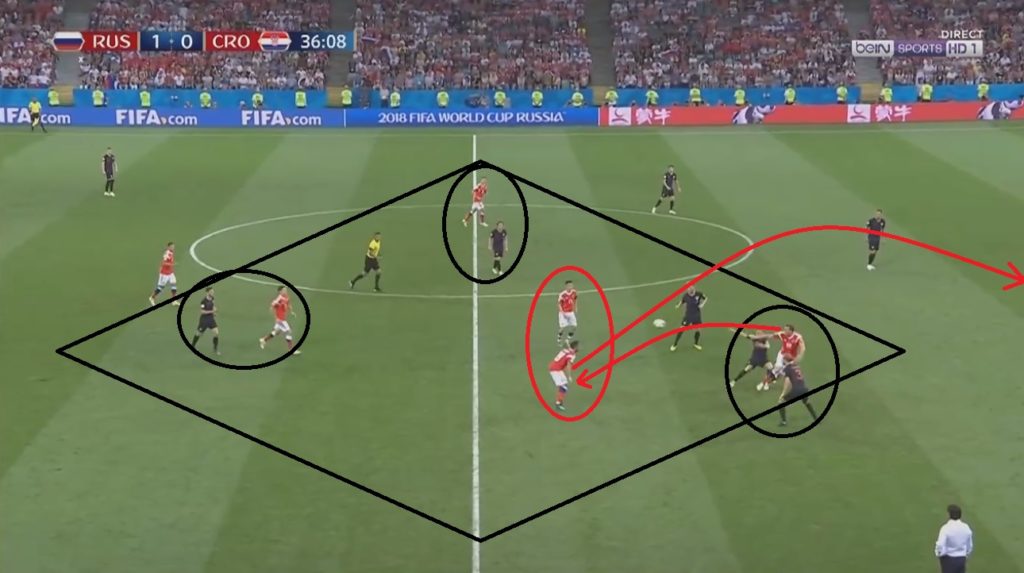 Thus, by stretching Croatian block and cutting out of it with this counter-pressing structure, France can upset Croatian midfield. But again, Deschamps’ men would have to execute a quick passing play and the timely transition of the ball from Croatia’s block to the targeted attacking area.

Les Bleus displayed a strong defensive set up against Belgium in the Semi-final (picture is shown below). Against Croatia, the central defensive block of Umtiti and Varane at the last line and Kante, Pogba, Matuidi at the next line can absorb the pressure from Croatia’s narrow midfielders and the striker. 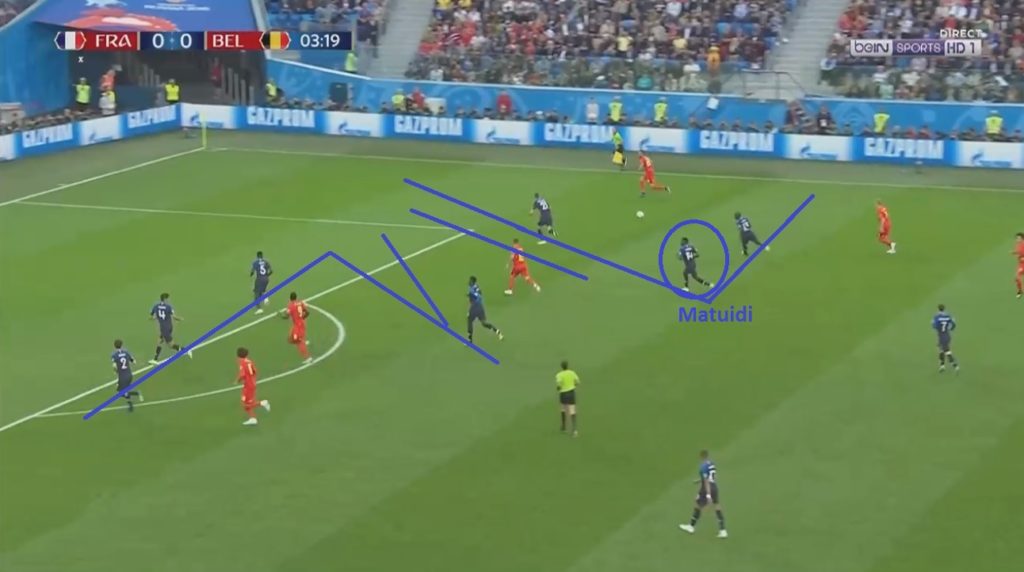 While France maintains width at the right with Mbappe going wide, the left winger, Matuidi, tends to narrow the midfield during the defensive phase. Matuidi’s narrow presence must restrict Modric in the half spaces forcing him to go deeper thus further congesting Croatia’s central midfield. As the Croats attack from the flanks too, this would allow France to disturb and try winning the ball, or at least disturbing the opponents’ play, from the source rather than conceding the possession in more dangerous regions or in the central region where Croatia is more comfortable with the likes of Modric’s creativity and Brozovic’s and Rakitic’s control.

Since Croatia uses the centre to control the flow and then to dictate the attack back to the flanks, by winning the ball from the source at the wider planes before it gets in the feet of Modric or any central midfielder, France can upset Croatian midfield. The pictures below show how Croatia is using the centre to control the flow and how Brozovic moves around to get the ball from his marked teammate at one side and circulate to either pole of Rakitic-Modric attacking midfield.

In the above picture, England is isolating Croatian wide players from central midfielders – they were not consistent with it though. France would need to deploy this pressing structure consistently to keep Croatian midfield unused and the wide players frustrated for long. But this zonal pressing would end up rendering Croatia to use long wide balls to the region behind French fullbacks.

That’s where France’s low block needs to remain compact as it does, ensure the double cover to resist Croatians to cut inside the box and clear the pressure at the earliest. For any aerial pass conceded in the box, France has its central defenders to clear the pressure.

Griezmann being the central icon can press Brozovic in Croatia’s half (see the above picture) since the latter is to rebalance Croatian attacks from one pole to other as explained above. Other than this marking in Croatia’s half, France will be better off with zonal defence only especially targeting the deeper zones of the outfield. In other words, attempts to man oriented press in central regions of the outfield by the Les Bleus could allow Croatia’s midfield – Rakitic and Modric – to manipulate France tactically as they did to England.

Giroud and Mbappe better remain at the upfront to exploit any opportunity to go beyond the central defenders. This set up would obviously not going to be observed as ideal as it is described and that Pogba’s defensive role in half spaces to stop Rakitic from the source could leave a larger area for Kante to cover in the centre. But Kante can get to anywhere and France has also time again maintained the solidity of its low block while overcoming the defensive loopholes be it 4-2-3-1, 4-3-3 or 4-4-2 formation. Repeating it, France can sustain its balance against Croatia with zonal defence only; any pure form of man-marking in the central regions of the outfield could cost them. By maintaining a solid zonal defence in a consistent manner, France can upset Croatian midfield.

But France’s asymmetrical set up keeps their formation solid for defensive phases and fluid for transitional phases. Finally, despite Croatia seems to be the mentally stronger side but France is resilient, has established history over the opponents, and possesses the likes of clinical and threatening Mbappe who can even earn them a late winner.