I guess that it had to come to an end at some point, did it not? The FIFA World Cup 2018 in Russia will go down in the history books as one of the greatest tournaments of the modern era. Let’s not pretend that there were not issues with the tournament with the standard of refereeing and the introduction of VAR combined with the lack of effective cohesive play from some of the nations. With that said the positives far outweigh the negatives, we saw goals, lots of them, and the emergence of a real star in the French forward Kylian Mbappe but more than that we saw a lot of positive football and the beginnings of the realisation of two ‘golden generations’ in Belgium and Croatia.

The final itself was a match between two deserving opponents. The French were perhaps the most consistent side over the course of the whole tournament with coach Didier Deschamps finding a way to combine resolute defence with a highly effective attacking unit, if you take out Olivier Giroud that is, whilst finding a way to unlock the full talent of the Manchester United midfielder Paul Pogba. Indeed fans of the English side may have been watching this final wondering when this version of Pogba is going to show up at Old Trafford.

Croatia on the other hand had shown real resolve to reach this stage having come through penalty shoot outs against Denmark and Russia and then going a goal down in their semi final against England before winning 2-1 with the deciding goal coming in extra time. They possessed the best player in the tournament in midfield maestro Luka Modric and a forward in Mario Mandzukic that perhaps more than any other forward belies direct comparison.

In the end, the French were a step too far for the Croatians and despite dominating large spells of the final they found the French defensive resistance difficult to penetrate.

That may have been the narrative of the final but what were the key tactical matchups? 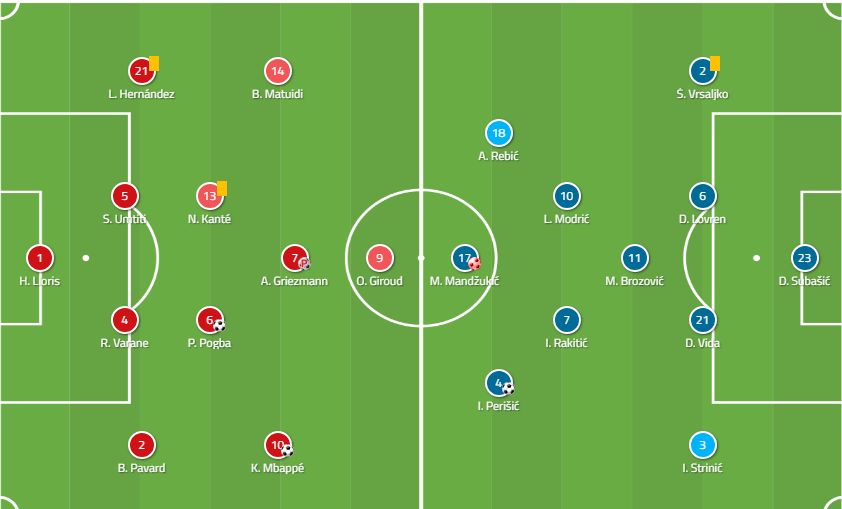 There were no surprises when the team news was announced with both coaches choosing to go with the same sides that came through semi-finals against Belgium and England respectively and which were now battle hardened.

The keys to the French squad lay in their defensive unit of Raphael Varane and Samuel Umtiti which was shielded superbly throughout the tournament by the brilliant N’Golo Kante. These three players existed to allow the other French players to create further forward. Paul Pogba was released by the selfless running of Kante whilst further forward Kylian Mbappe and Antoine Griezmann made penetrative runs from deeper areas that the Croatian back line struggled to deal with.

Special mention should be made to the VfB Stuttgart defender Benjamin Pavard who has impressed at right-back for the French throughout the tournament.

Croatia were back in their 4-3-3 shape again having changed to a 4-4-2 for the quarter-final win over the hosts Russia.

The key for the Croatians lay in the midfield three with Luka Modric and Ivan Rakitic showing once again why they are two of the best midfielders in World football and the Inter Milan midfielder Marcelo Brozovic played the role of the deepest midfielder well.

These three were in place to allow the likes of Ivan Perisic and Ante Rebic to wreak havoc in the wide areas and for the aforementioned Mario Mandzukic to clash time and again with the French defenders.

Modric and Rakitic dominate the half-spaces

One of the key aspects of Croatia’s attacking gameplay in this match saw the two most advanced central midfielders position themselves in the half spaces as the Croatians looked to overload the French in wide areas to force a breakthrough. This is quite possibly a direct result of coach Zlatko Dalic recognising that the strength of the French defensive structure lay in the centre. What was interesting however were the different heights on the field that Rakitic and Modric tended to operate in. 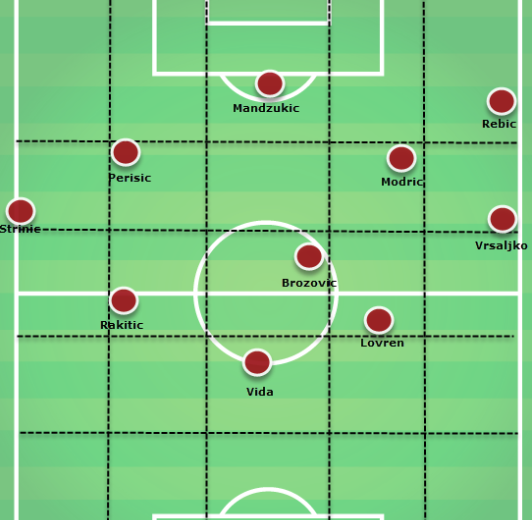 Here I have drawn out the kind of positions that we were seeing the Croatians take up throughout the game. The key though lay in the areas of the field that Modric and Rakitic would look to take possession of the ball. Modric was naturally higher up the field in the right-hand half-space where he would look to take possession and interact with Rebic and Vrsaljko in order to isolate and overload the French left-back Hernandez. Ivan Rakitic, on the other hand, would take possession of the ball in a much deeper position dropping into the space between the left-sided central defender and the left back to take possession ahead of the French midfield before playing forward into the likes of Perisic or Mandzukic. 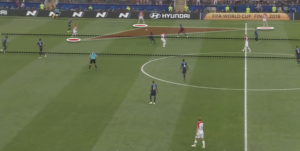 Here we can see a situation in the first half with Modric positioning himself in the right-sided half-space and taking possession from a Perisic flick. As soon as he takes possession of the ball in these areas he can combine quickly with the likes of Rebic or Vrsaljko to progress the ball.

These areas were key for the Croatians as they tried to effectively move the French defensive block by forcing the likes of Kante or Pogba to move across to cover the positioning of Modric. This would, in turn, leave spaces centrally that Croatia could then look to exploit with quick shifts of the ball.

Out of possession, the French shape shifted to a relatively standard 4-4-2 with Griezmann and Giroud forming the first line of pressure and Mbappe and Matuidi dropping back to create a line of four with Pogba and Kante. By dropping into these areas to receive possession of the ball Rakitic was attempting to find a solution to the French pressure. He would drop in to take the ball before then attempting to break the first line of French midfield pressure with either a vertical pass through the line of by carrying the ball into space and looking to connect with Strinic at left back.

Throughout the tournament, there were no better team defensively than the French as Raphael Varane and in particular seemed to truly come of age in Russia and he is on his way to becoming the best defensive player in football. The defensive game plan put in place by Deschamps, however, is more than just the sum of its individual parts. They operate as a unit in much the same way that we normally see from well-drilled club teams with the midfield unit operating in such a way to shield the defensive line and prevent the opposition from playing in the spaces between the French midfield and defence. 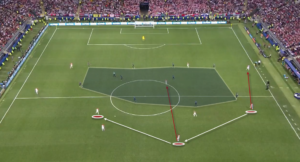 Here we see the French defensive block with the Croatians in possession of the ball. Croatia progress the ball from the right-back slot through to Rakitic on the left side but twice they failed to take advantage of the opportunity to pass the ball vertically, firstly the right-back could have gone to the right winger to try to play around the defensive block. Secondly, there was the chance of a vertical pass to Modric which was ignored in order to play around to Rakitic.

This form of ball circulation is designed to provoke a mistake in the French defensive unit as the Croatians hope that one player is slow to shift across in relation to the ball and that this can be taken advantage of with a quick vertical pass. The French however possess remarkable tactical discipline combined with the physical attributes to close spaces quickly. 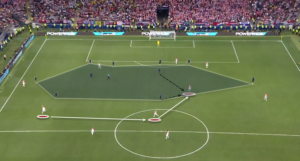 Here we see this attempt to shift the ball and create space in action. As the ball is moved by Rakitic across to Brozovic in front of the French defensive block they open up a passing channel into Luka Modric who is in space to receive the ball.

As soon as the ball is shifted into Modric the French immediately move across to press the man in possession and deny him the space to threaten the French defensive line. Griezmann and Kante immediately press the ball and win the ball cleanly. 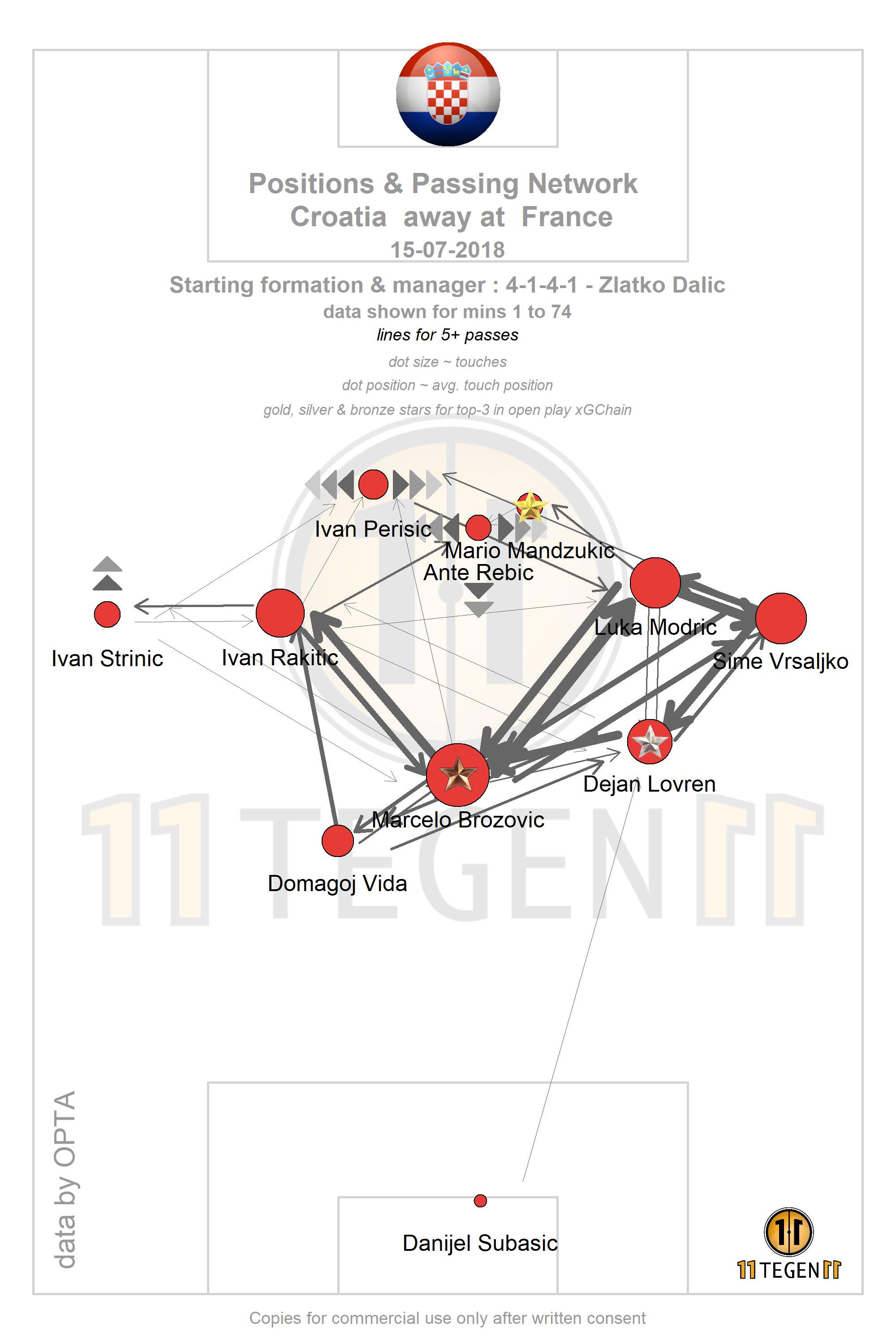 As you can see from this passmap created by the excellent @11tegen11 using Opta data the Croatians had a number of strong connections but those largely occurred in front of the French defensive block as they struggled to penetrate into the final third.

As soon as France had a comfortable lead, as a result of a contentious penalty awarded thanks to VAR, the game became one of transitions for them as they looked to soak up Croatian pressure before springing out in a series of rapid breaks led by the fantastic Kylian Mbappe and the passing range of Paul Pogba. The French were a constant danger as they looked to use direct vertical passes to isolate and beat the Croatian fullbacks. 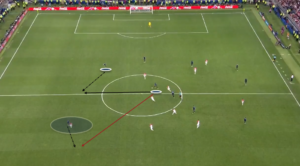 Here you can see the moment of transition for the French from defence to attack as the game is fully stretched.

The threat is there for Pogba to utilise the run of Mbappe as he is looking to isolate and beat the Croatian left-back Strinic. This time Pogba chooses to shift the ball out wide to right back Pavard who has space to advance in to. The threat of the direct pass was not used this time by the French but the Croatians should have read the threat. 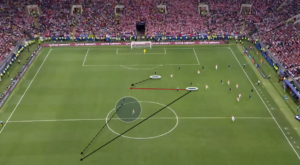 This is the lead up to the third goal for the French before the ball eventually breaks to Pogba on the edge of the area for a calm finish. First thought the Manchester United midfielder is key to the break with the quality of his pass. Once again the option is there for Pogba to play out to Pavard for a more measured transition but this time he hits a wonderful pass out to Mbappe who is again isolated against Strinic. The young forward comfortably outpaces the fullback and the French advance into high positions to support the attack.

There are still some who will say that the Croatians were unlucky to lose this game 4-2 with the first two goals coming from an own goal and a highly contentious penalty. In truth, the French did more than enough over the course of the game to show that they were worthy champions.

The xG score, again supplied by @11tegen11, shows how close this game may well have been with the French edging it by 1.07 to 0.9 this partly can be attributed to the first two French goals being somewhat fortunate but it also shows how efficient the French were with their third and fourth goals coming from outside the area.

In the end, the French were deserving winners and more than that the youthful nature of their squad may lead to a new era of domination for France.