Saturday brings us the EURO 2020 quarter-final between Ukraine and England which will be played at the Stadio Olimpico in Rome. England are coming into this match after beating Germany 2-0 at Wembley and they are yet to concede a goal in this tournament. At the other end, Ukraine defeated Sweden after scoring a 120th-minute winner in extra time. They have conceded six goals so far, but have superb attacking quality in the likes of the in-form Andriy Yarmolenko and Roman Yaremchuk, along with Oleksandr Zinchenko pulling the strings from midfield or out wide.

This tactical preview will provide us with England and Ukraine’s potential tactics and line-ups for this EURO 2020 clash. Through this analysis, we will get an insight into how each team can compete to earn a place in the semi-final. The winner will face the winner from the Czech Republic and Denmark game. 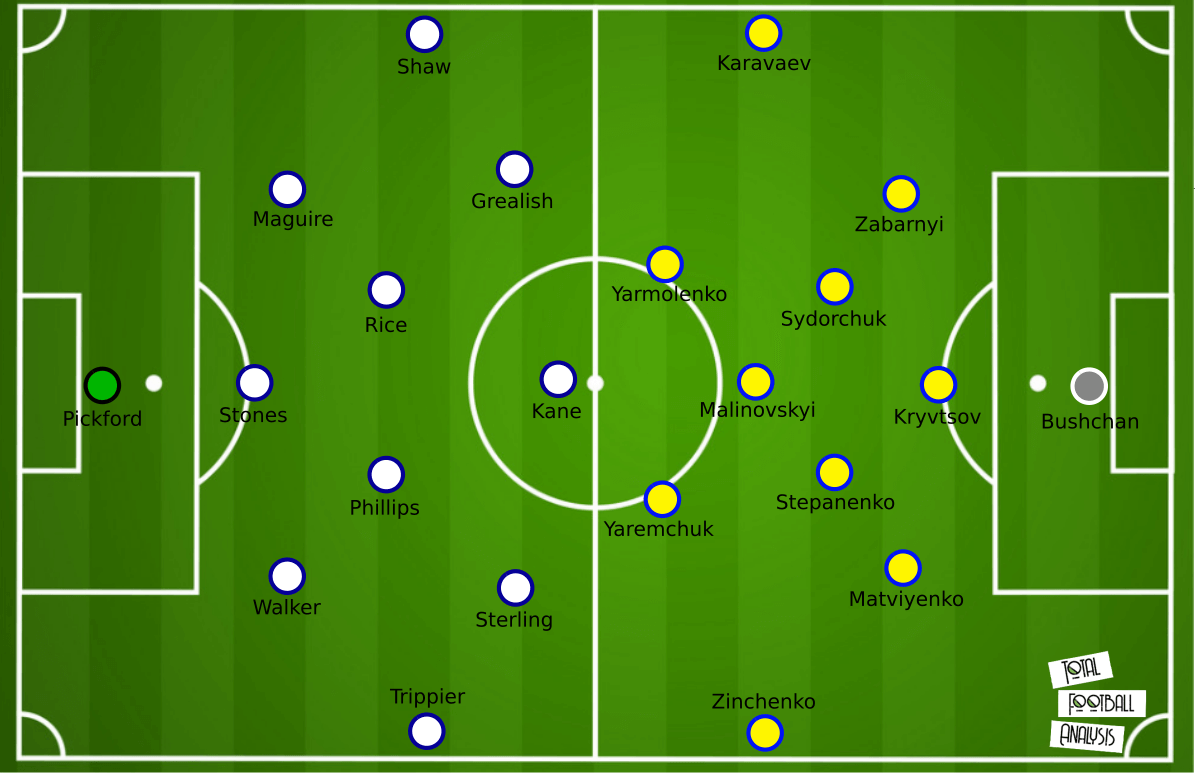 Gareth Southgate has a magnificent roster at his disposal and it is both good and bad. It is good because he can adjust his team to multiple formations and he has impressive attacking assets, but it is bad because whoever he picks for starting XI, his choice is always doubted by media and fans.

Jordan Pickford will start between the posts, he didn’t have too much work in this tournament, but against Germany, he had two big saves after facing shots from Chelsea duo Kai Havertz and Timo Werner. Since Harry Maguire was cleared to play, Southgate decided to switch into a three-man defence with him taking place on left centre-back. John Stones occupies the central role while on the right centre-back is Kyle Walker. On the right wing-back, we expect Kieran Trippier, but Southgate has the good option in Reece James as well for that position. On the opposite side, we expect Luke Shaw who was one of the best players on the pitch against Germany which could give him an edge over Ben Chilwell who is cleared to play after passing COVID-19 protocols. We doubt Southgate will change midfield duo Kalvin Philips and Declan Rice and we fully expect them to start again. In the attacking trio, two players are safe to start: Raheem Sterling and Harry Kane. The third player was often rotated with Bukayo Saka, Mason Mount, Phil Foden and Jack Grealish while they also have at disposal Manchester United duo Marcus Rashford and Jadon Sancho who wasn’t used much so far. We will give the advantage to Jack Grealish since his substitution against Germany was crucial and he was involved in both England goals.

Andriy Shevchenko doesn’t have such a high-quality overall roster like Southgate, but he has a very good starting XI and few players from the bench who can make difference when brought in. It will be interesting to see will he start in three at the back formation which looks closest to 3-5-2 or he will opt for 4-3-3. On the image above we displayed how they could look if they start in 3-5-2 formation. Starting keeper is Georgiy Bushchan who showed good reactions in the last three matches after having a very bad opening game against the Netherlands. We expect Ilya Zabarnyi and Mykola Matviyenko to play whether they start with two or three centre-backs. If playing with three centre-backs we expect Serhiy Kryvtsov to get the second start in a row, but if they play with two centre-backs we then expect Vitaliy Mykolenko to occupy a left-back position with Oleksandr Zinchenko being the other option, however, we see him playing in midfield in that formation. Taras Stepanenko and Sergiy Sydorchuk will start in midfield with Ruslan Malinovsky getting a slightly advanced role and we expect him in starting XI in this match after starting on the bench in the match against Sweden. The right wing-back should be Oleksandr Karavaev while on the left side we expect Oleksandr Zinchenko. The striking duo is Roman Yaremchuk and Andriy Yarmolenko, while Yaremchuk mostly occupies central areas, Yarmolenko likes to drift on the right to receive the ball.

The first tactical point we will look into is how England will apply high pressing to disrupt Ukraine build-up. If both teams start with three-man defences England will then apply man-to-man marking as they did in the match against Germany. 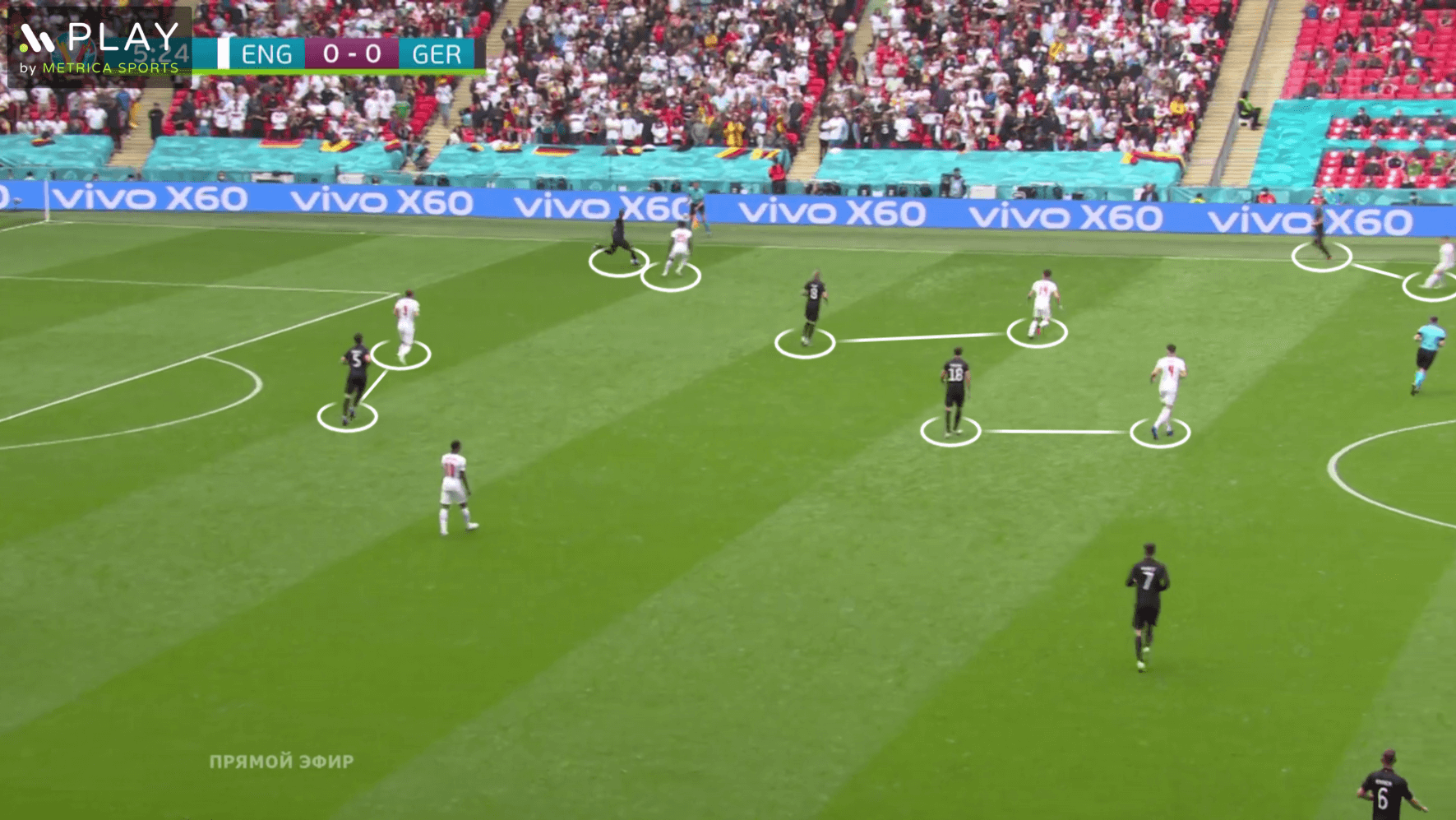 In this example, we can see how England pressed Germany higher up the pitch. We see that all England players are close to their nearest opponent, but also not too close because if the ball is played over them so that they can get into defence quickly or collect deflected balls first. It is a big advantage for England to have players like Rice and Phillips in the middle who can cover a lot of ground and play with high intensity over the whole match. Now we will take a look into another situation from that match and how it could be exploited. 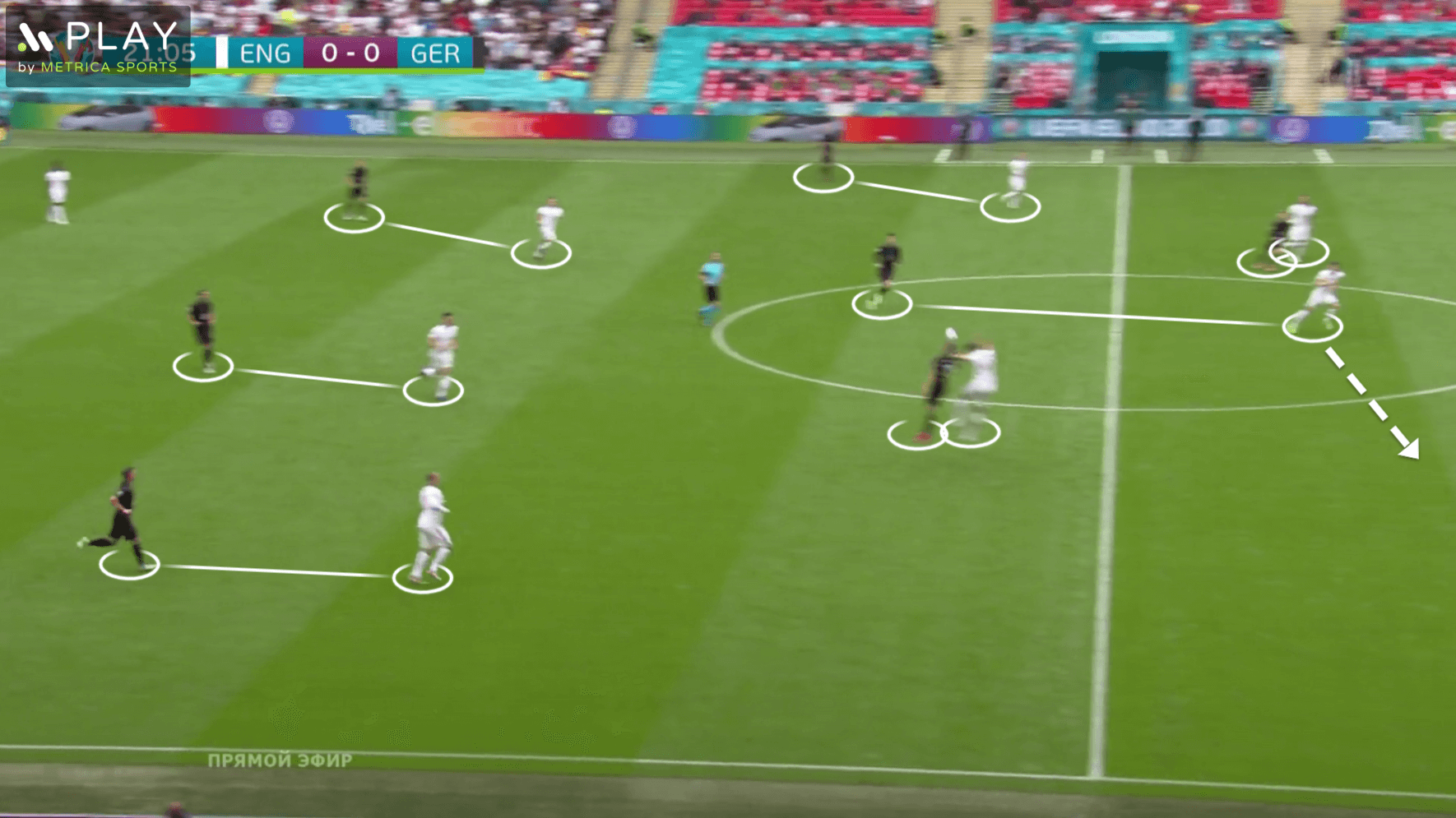 In this situation, Neuer tried to find Muller with a long pass, but Maguire won the aerial duel. However, we can see how everyone is close to their players except Stones who needs to cover Maguire’s back if he loses the aerial duel or the ball goes behind him. We know that Germany didn’t have any tall striker who can win those duels against aerially dominant Stones and Maguire, but Ukraine has Yaremchuk who can compete with them in those situations. If the Ukrainian defence can find Yaremchuk with long balls to avoid press with Malinovskyi and Yarmolenko close to him to receive the pass from him or pick up deflected balls it could be crucial for them to get the positive result. Another important note would be to target Walker in aerial duels and Maguire with through balls because the other way around will be tougher to complete the actions.

Yarmolenko is the crucial player for Ukraine so far in this tournament. He is capable of producing moments of magic that lead to goals or assists and he can make things happen for Ukraine. Karavaev is the player who holds the width most of the time and looks to get forward as fast as possible and we will see how they use him to draw attention. 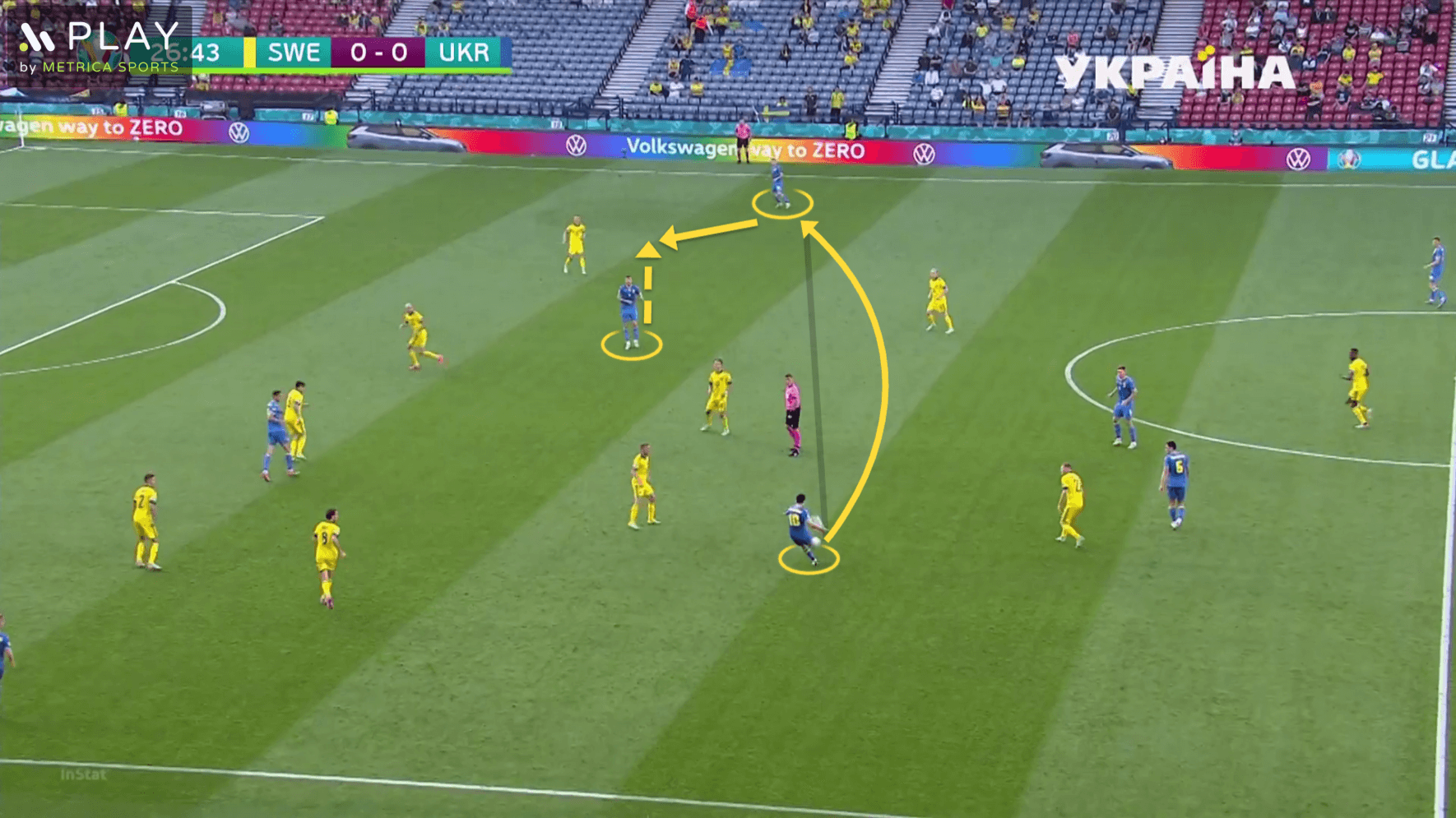 We can see how Karavaev is positioned wide while Yarmolenko is central. At this moment Malinovskyi switches the side of the play to Karavaev which instantly triggers Yarmolenko to get into the right halfspace to receive the ball from Karavaev unmarked. His free role allows him to roam and get central, which often draws attention allowing Karavaev to receive the ball wide without pressure.

In the image below we will see a similar situation, but when Karavaev joins the attack from deep. 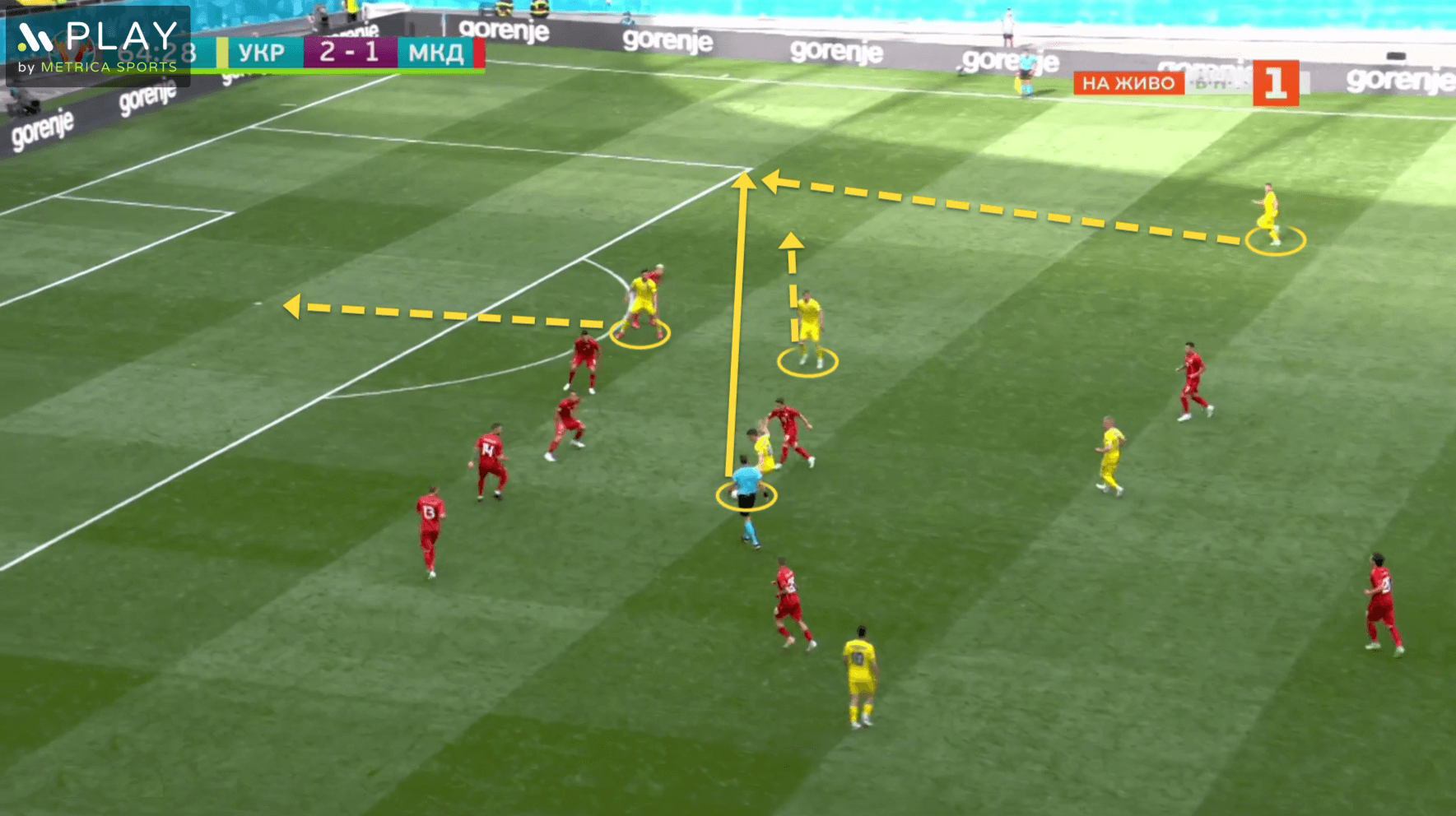 We can see how Yarmolenko is positioned centrally once again while Karavaev makes a forward run towards the penalty area. In this situation, Malinovskyi can make a pass to Yarmolenko, but he would be instantly pressed by the North Macedonian defenders and wouldn’t have much time and space on the ball. Yaremchuk is on verge of offside and his main duty is to keep the defenders occupied with him outside the penalty area while when the ball is in the crossing zone he is looking to get into a situation to be on receiving end. Malinovskyi makes a pass towards the Karavaev which leads to the whole opposition defence to switch focus and close the other side. This passes to the third player, in this situation Karavaev, switches attention from Yarmolenko who then has enough time to receive the ball unmarked close to the penalty area. Yarmolenko movement is crucial and England will know that he is the main threat, but through this pattern of play, Ukraine often gets Yarmolenko the ball in the spot where he is the most dangerous given his quality cuts onto his left foot.

England can make things happen in the counterattacks or in the actions when Kane draws centre-back out of his position. In this section, we will explain both situations. 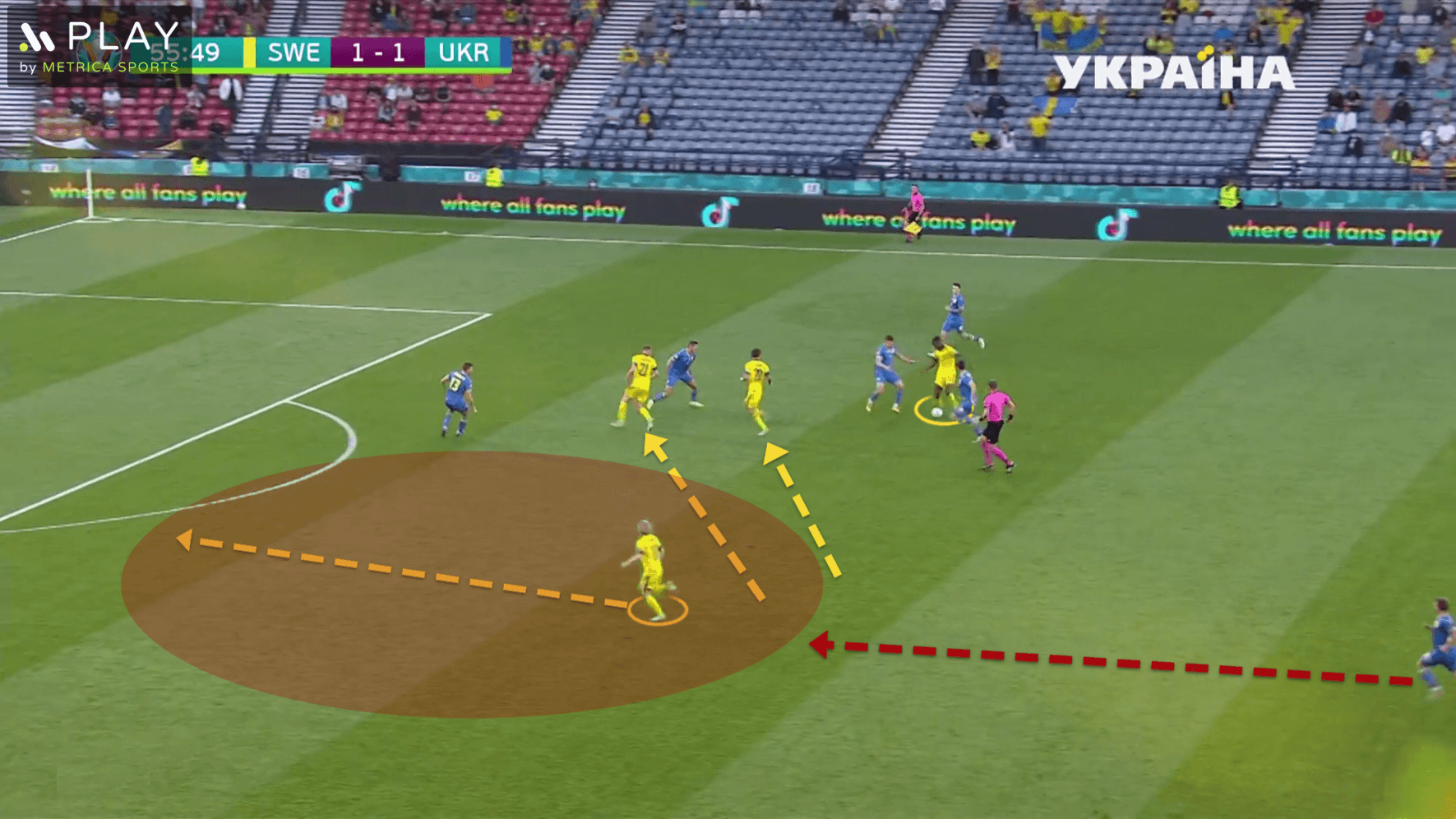 On the image above we can see the situation against Sweden when Forsberg hit the post in transition. Karavaev forward runs and responsibility to keep the width in the attack can be exploited like Sweden did in this counterattack. Whoever gets the start on the left side in the England attack he could be decisive if he can exploit space behind Karavaev in transitions. 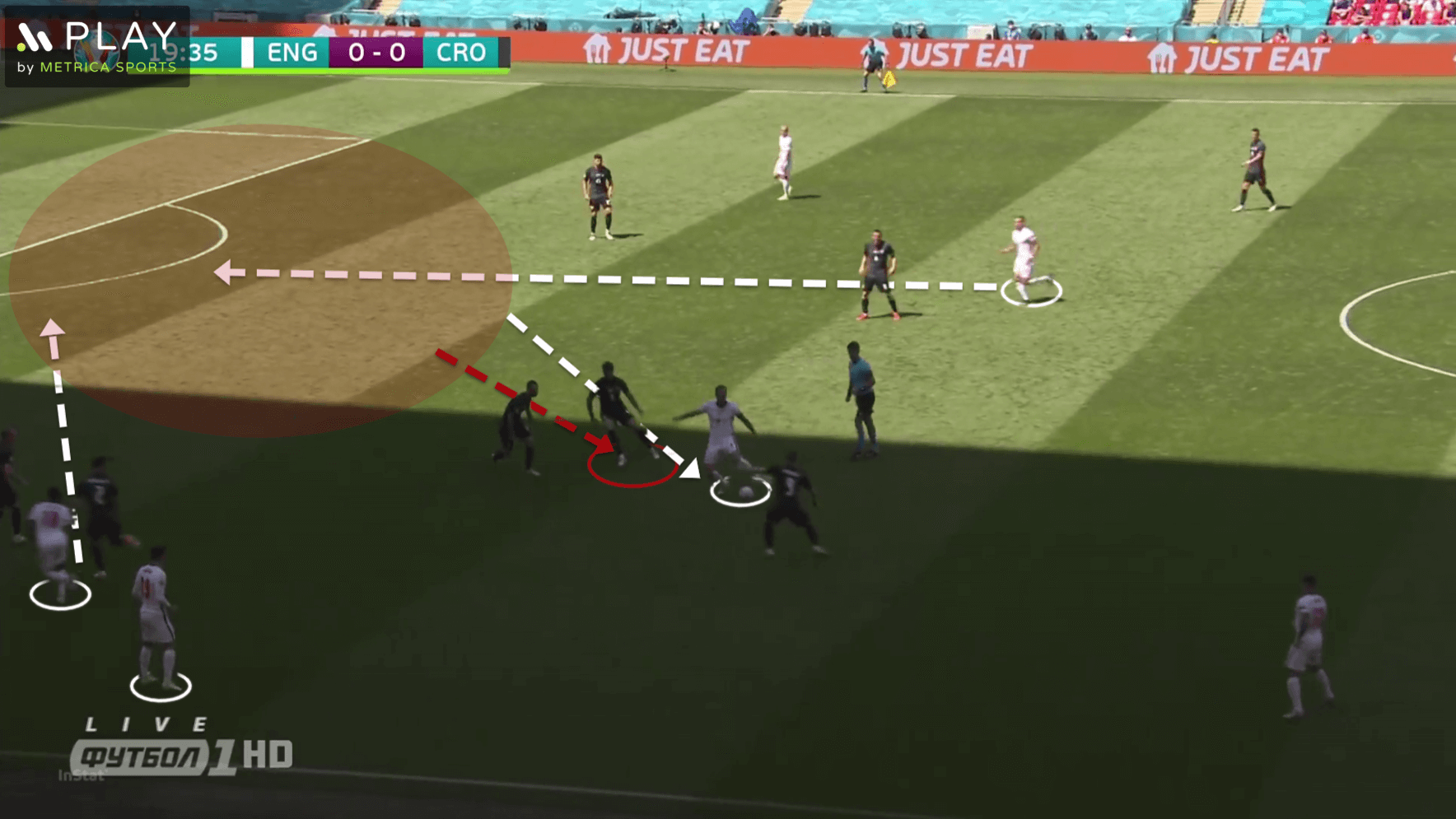 This situation on the other side shows us how England can hurt Ukraine when its defence is structured and positioned deeper. Harry Kane likes to drop deeper to receive the ball and it often draws attention from centre-back. In this situation, we can see how Kane drew Croatian centre-back out of his position which opened a lot of space behind him. The opposite midfielder and both wingers/attacking midfielders can take advantage of it by making a run into that space. In this situation, Raheem Sterling run is very important because he creates a space for Mount to receive the ball from Kane undisturbed which gives him enough time to make the final pass.

Crossing on the far post could exploit Ukraine woes

This section will show us how can England exploit Ukraine’s problem with defending on crosses. 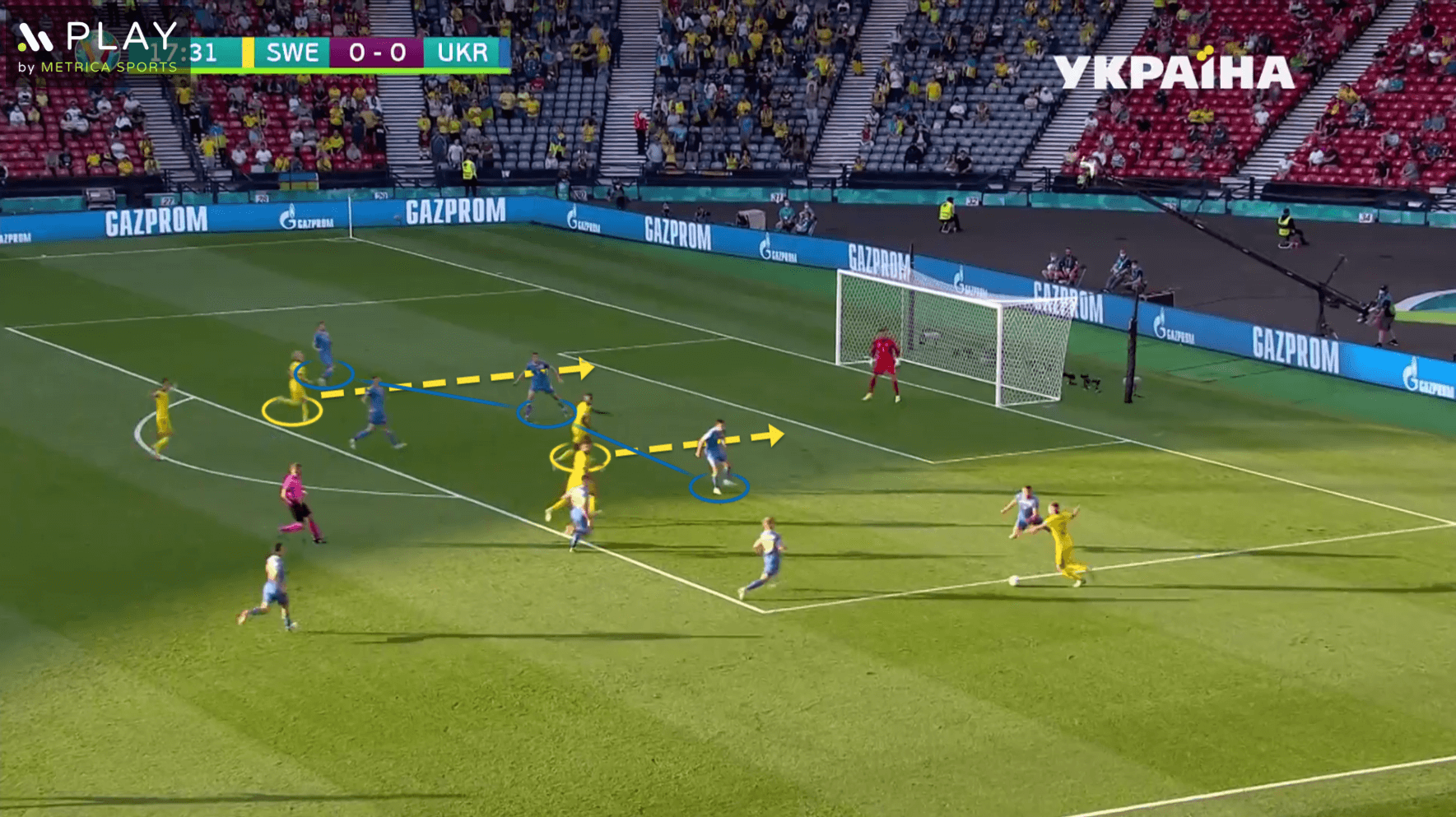 In the match against Sweden, we can see how Ukrainian defenders are far away from each other and they are focused on the crosser while leaving the Swedish forward arrive unmarked into the areas between them. Kulusevski decided to cross on far post towards Forsberg who was a little too short to attempt a header on goal. If Kulusevski decided to try a low cross towards the Isak it would probably find him around the six-yard area as well which puts a doubt on Ukrainian marking in the penalty area. The example below will once again support the fact that even though Ukraine has a numerical advantage in the penalty area, they lack communication and have problems with marking opponents on crosses. 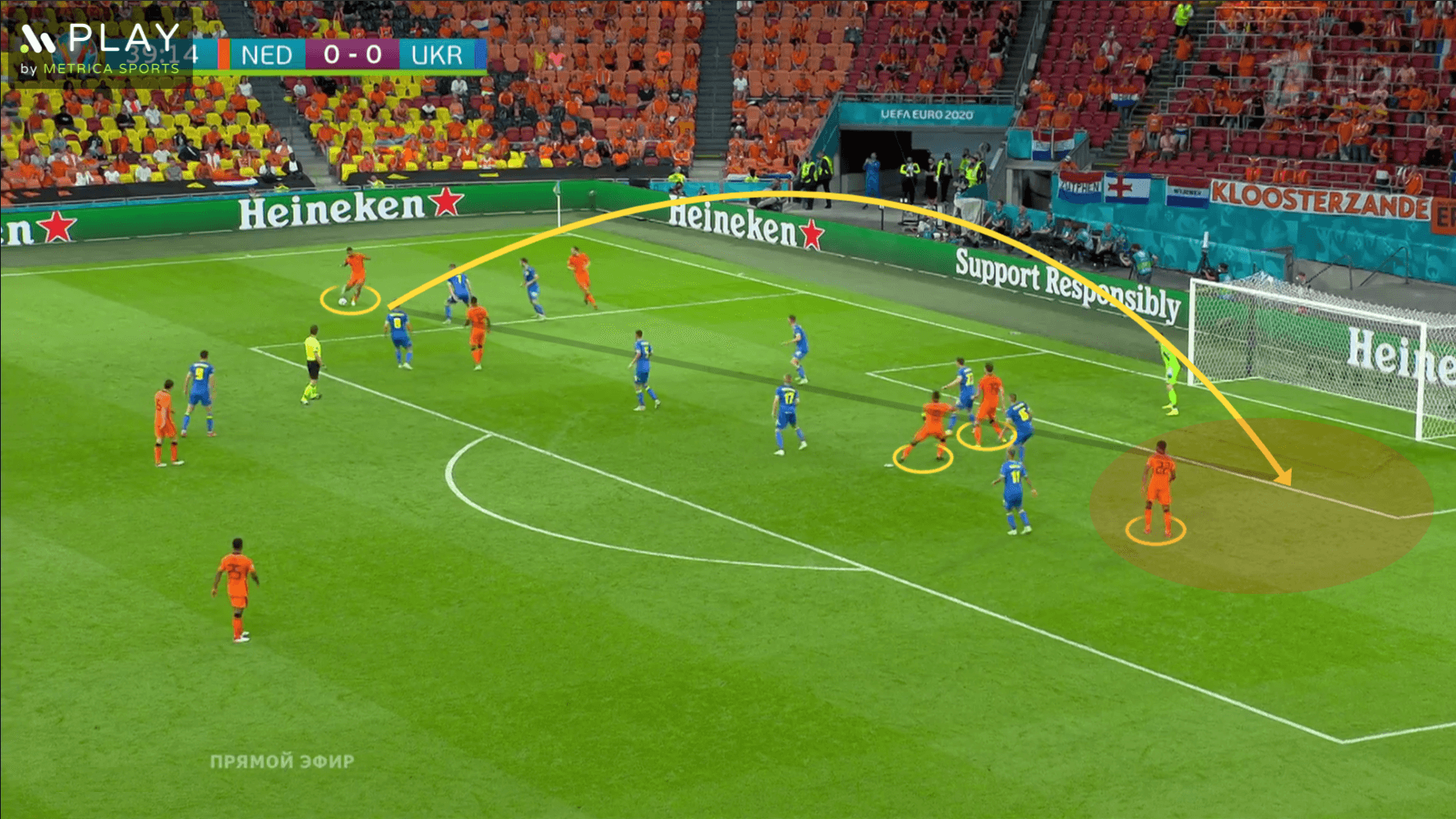 In the central area of the box, we can see that Ukraine has six players against the Netherlands three players, but only two defenders are defending actively and marking their players. It is inadmissible that the opposition player gets a clear cut chance on the cross in a situation where your team has a number advantage 6v3 in the area. Getting from the shadow into the Ukrainian penalty area and attacking the far post could be a recipe to get into a goalscoring opportunity. 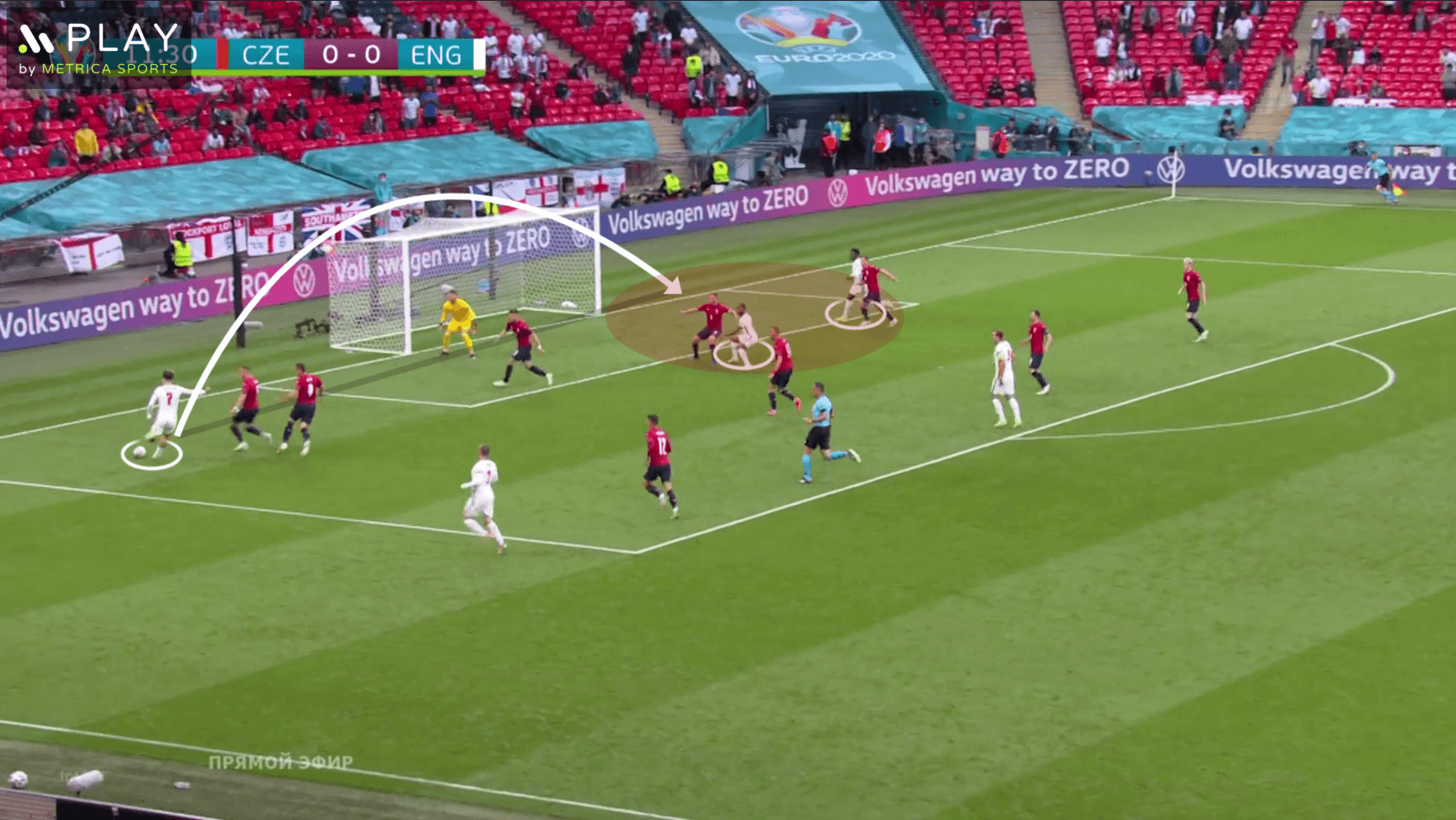 In the match against the Czech Republic, we witnessed a similar goal by England when Grealish found Sterling on the far post for an easy header. Ukraine defending on crosses will have to improve because England is capable of scoring from these situations.

Both teams are very good, but we have to give an advantage to England, they have too much quality in the squad and it would be a big surprise if they don’t progress to the semi-final. Ukraine surely has the ability to beat anyone especially when their main players are in form and motivated, and when they will be motivated if not in EURO 2020 quarterfinals? We are all looking for good football and an exciting match between these two sides.