The UEFA EURO 2020 last-16 clash between Sweden and Ukraine was played on Tuesday night. It was another close and intense match to close out the round of 16. AC Milan legend Andriy Shevchenko changed his team from a back four to a back three for the first time in the tournament, and this adjustment became pivotal to the victory.

This tactical analysis is will pick out some of the key tactical points from this match, particularly Ukraine’s wing-backs and how they were vital to this win.

Janne Andersson’s 4-4-2 formation was unchanged. In this game, the former IFK Norrköping manager tried Dejan Kulusevski with Alexander Isak upfront instead of playing Robin Quaison or Marcus Berg. The rest were the regular players he trusted who had led Sweden to the top of Group E.

It was a bold decision from Shevchenko to change his system for this match. Manchester City‘s Oleksandr Zinchenko was moved to the left flank as a wing-back while Atalanta’s main man – Ruslan Malinovskyi started on the bench, which might be a tactical consideration or a result of his ineffective performance in previous matches.

As suggested in the title of the analysis, Ukraine were very aggressive to deploy a pair of high wing-backs. With the front four, they could fix the height of Sweden’s backline and thus created more space for the players in the build-up. As Sweden were not pressing high, the start of Ukraine’s attack often came from the middle third, and the team from Eastern Europe controlled this phase quite well.

Notice how the right wing-back Oleksandr Karavaev already pushed high and wide instead of dropping deep. He and the right centre-back would always create a dilemma for Emil Forsberg. When the Sweden wingers got tight to one of them, the other was free because the distance was too big to cover. Further, the Swedish wingers could not move of position too soon as they must stay centrally to reach numerical equality (3v3). Without the wingers tucking inside, Kristoffer Olsson and Albin Ekdal were overloaded by the Ukrainian midfield.

Ukraine mainly used the midfielders to absorb pressure, then allowing wide centre-backs to bring the ball forward into spaces freed up by wing-backs. Hence, both Ilya Zabarnyi and Mykola Matviyenko must be brave enough to break the first line with ball-carrying.

The above image demonstrated the Ukrainian midfielders – Taras Stepenanko and Serhiy Sydorchuk keeping Isak and Kulusevski at the centre by positionings. Without the pressure from the strikers, Matviyenko could run with the ball into the advanced left half-spaces. However, with all the midfielders staying out of the block also means options were usually missing behind the midfield. Neither Roman Yaremchuk nor Andriy Yarmolenko was good between the lines, and they did not intend to use the blue zone. Instead, the pass usually went sideways to the wing-backs.

Thanks to the high positionings of wing-backs at touchlines, Sweden’s block was always stretched vertically and horizontally. Thus, Ukraine players at the middle third had less pressure and more spaces to play at the centre.

The above instance shows a Ukraine one-two play from the midfield. With three players at the centre, Ukraine could stretch the opposition second line to separate the midfielders, bypassing them one by one. For example, Olsson and Ekdal were away from each other as one defended spaces deeper while the other pressed Mykola Shaparenko. These gave spaces for Shaparenko and Stepanenko to combine and bypass the midfield line

However, Sweden were defending really well in a low block. Even the strikers were staying deep to maintain a compact block vertically. Since Ukraine could not get into spaces between the lines, they relied on the wing-backs to pose the threats and we will explain their functions in the next section.

The tactic of Shevchenko was to use a pair of high wing-backs to hold the width, stretching Sweden horizontally to create gaps between defenders. Also, when Zinchenko and Karavaev were high, they also pinned the full-backs at the defence to give the midfield players more spaces to play. 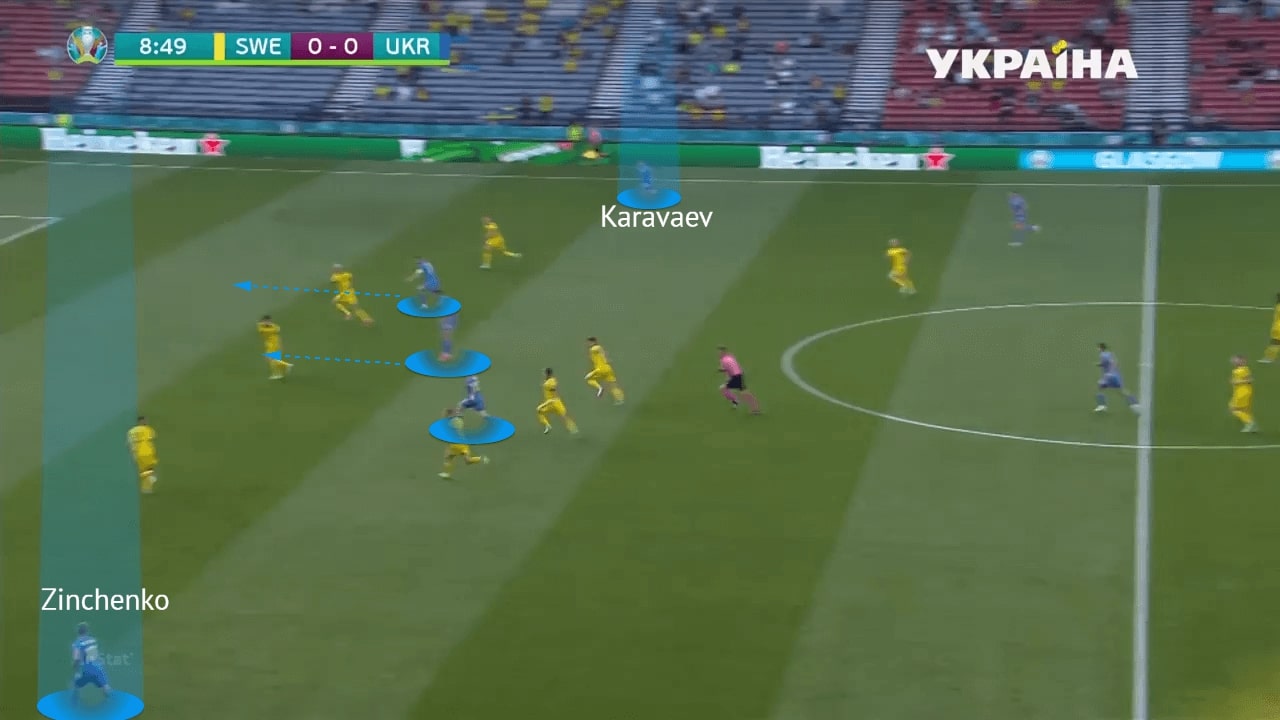 The above instance was the scenario after Shaparenko and Stepanenko’s one-two pass. Ukraine broke in front of the defensive line  with Shaparenko on the ball at left half-spaces, Sweden defenders could not step up to stop the attack as both Yaremchuk and Yarmolenko were running forward to force them retreating.

When a midfielder joined the attack high up, Ukraine had five players to occupy all five vertical zones in the attack. In this example, apart from feeding through passes to the strikers, Shaparenko could also find Zinchenko and Karavaev at the touchlines, these were the dynamics brought by the high wing-backs. Sweden struggled to defend the front four/five of Ukraine, especially when the wingers were drawn away from the defence by Ukraine midfielders.

Another example here, Zinchenko had the ball high up on the pitch but only Mikael Lustig could press him (Sebastian Larsson far away at right half-space). Ukraine already opened the shape to attack all five vertical channels with a runner from deep. This was a 5v4 situation with Sweden losing a man to mark all oppositions.

Therefore, when Shaparenko made runs at the centre, he was unchecked by any yellow shirt as Yaremchuk and Yarmolenko occupied the defenders 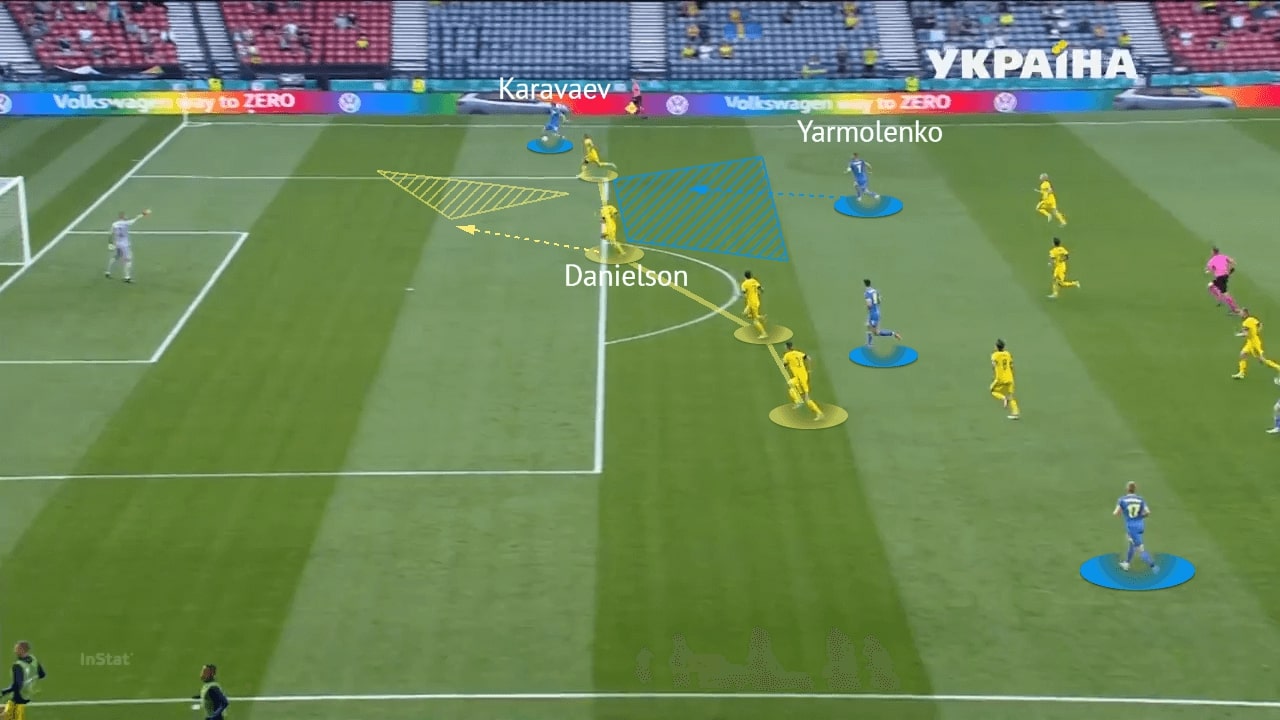 This was how Ukraine created Zinchenko’s goal. They capitalized on the wing-backs and find spaces properly through the process. The switch was possible to reach Karavaev at the right flank as the right wing-back was up early, he knew the ball was always going in front. Then, in that instance, Ukraine had a 4v4 a when attacking in the final third, the Sweden midfielders were yet to be back.

And the defensive system of Sweden was exploited. When Marcus Danielson prioritized covering spaces behind the left-back, he got deeper into the penalty box. However, he forgot the presence of Yarmolenko actually could be a short option for Karavev. The former Djurgårdens centre-back was late to defend blue zone because of his initial decision. Yarmolenko made good use of these pocket of spaces and continued the attack, Ukraine led.

Sweden in the offensive third

Ukraine also stayed in a midblock instead of pressing high in this game. They were disciplined mainly spending their efforts once Sweden bypassed the halfway line. Andersson’s men started in a 3-2-5 structure and shifted to a more aggressive 2-2-6 in the second half to stretch the oppositions in the second phase. 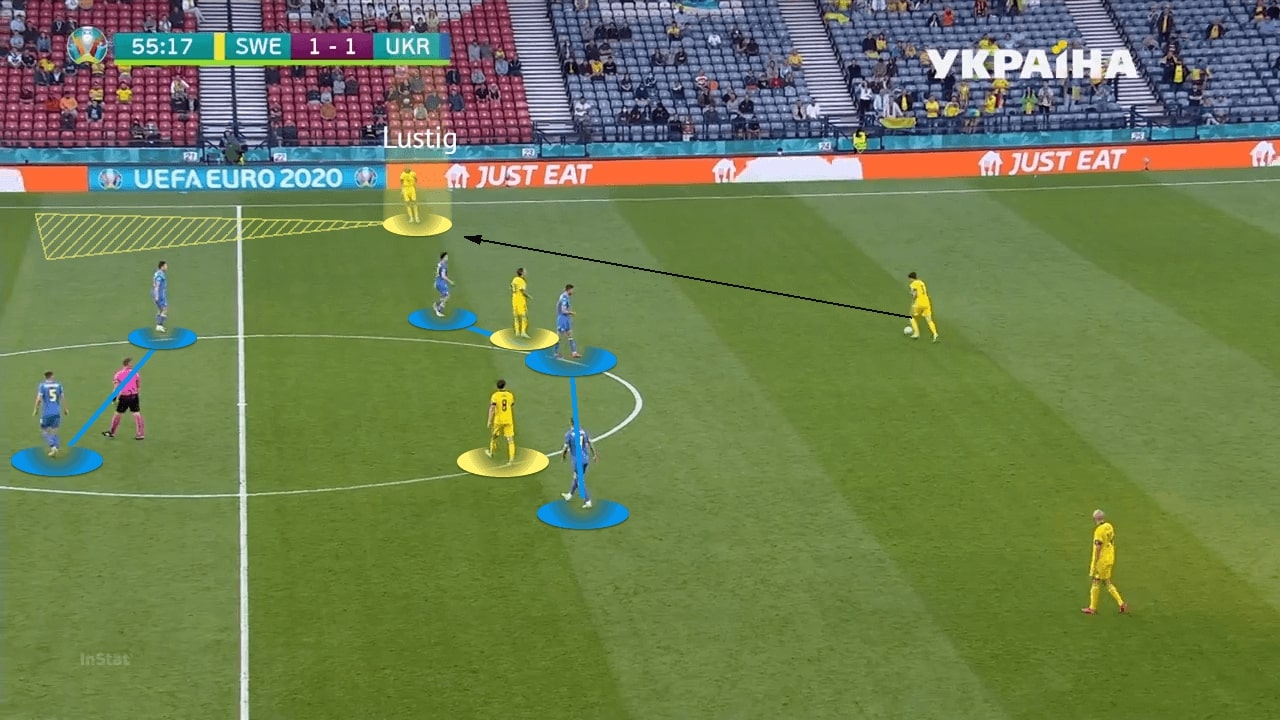 Lustig’s positionings were flexible in this phase. When he stayed inside, the shape was a back three so Danielson could carry the ball forward. If he stayed at the touchline, then he was likely the free player as wing-backs were pinned by wingers, while the Ukraine midfielders were blocking the centre initially.

Here, Ukraine were in a 5-2-3 block to cover the central spaces. They tried to limit Olsson and Ekdal’s space to receive so Lustig had rooms to receive. The AIK right-back was not even facing pressure from the front as Zinchenko was kept deep by Larsson.

With good players such as Kulusesvki, Forsberg, and Isak, Sweden could rely on the techniques of individuals to break into the final third. Also, they use long balls to hit spaces outside and let the strikers roam and receive anywhere on the pitch.

But Sweden also had interesting ways to attack in the final third, as we are explaining in this analysis: 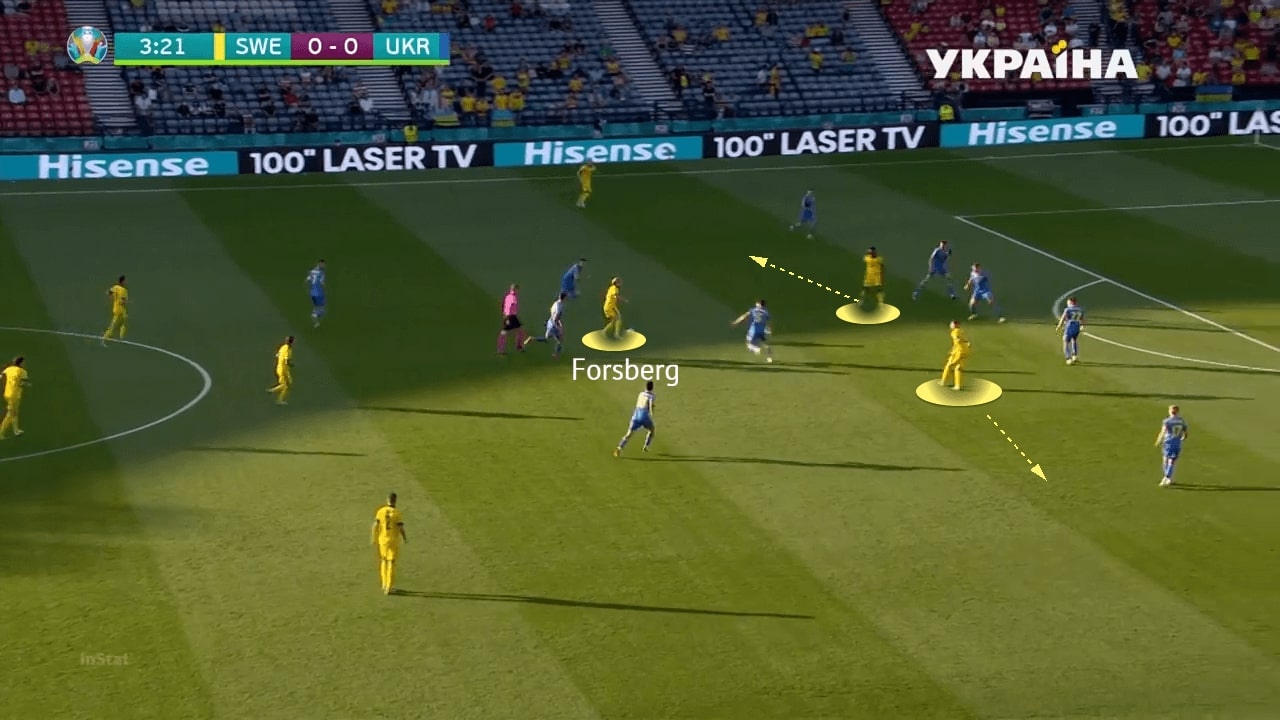 Here, Forsberg had the ball centrally – Andersson always wanted his best man to involve closer to the opposition goal. But Kulusevski and Isak’s decisions to move outside instead of going behind were questionable, the movements did not create spaces for Forsberg to shoot. The Sweden strikers tended to receive at feet and dribble in this game, but they might need to be more effective in this regard. 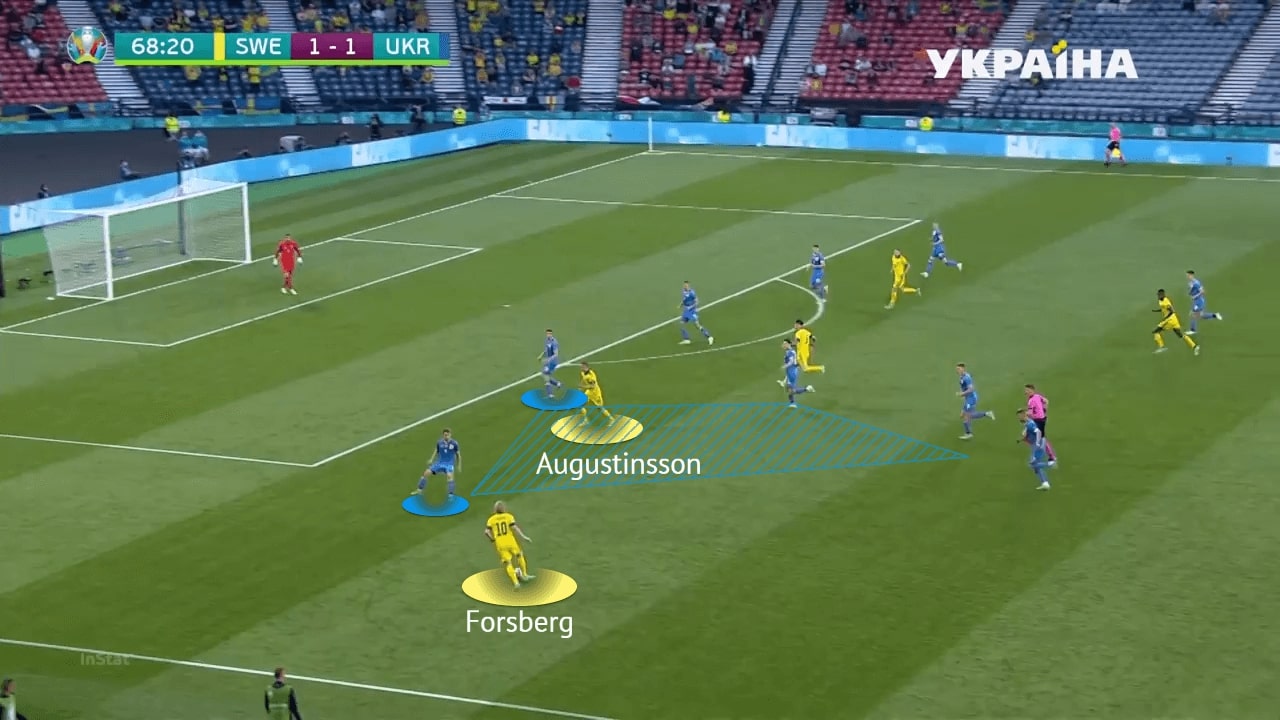 With other players, Sweden were much better in the criterion mentioned above. They attacked in an asymmetrical 3-2-5 with Ludwig Augustinsson playing high on the pitch, Lustig staying deeper at the defence. The Werder Bremen left-back made important runs that created dynamics for the team in the game.

In the above image, Augustinsson and Forsberg interchanged their positions, and the left-back was at the half-spaces, they were in a 2v2 situation against Ukraine’s wing-back and wide centre-back…… 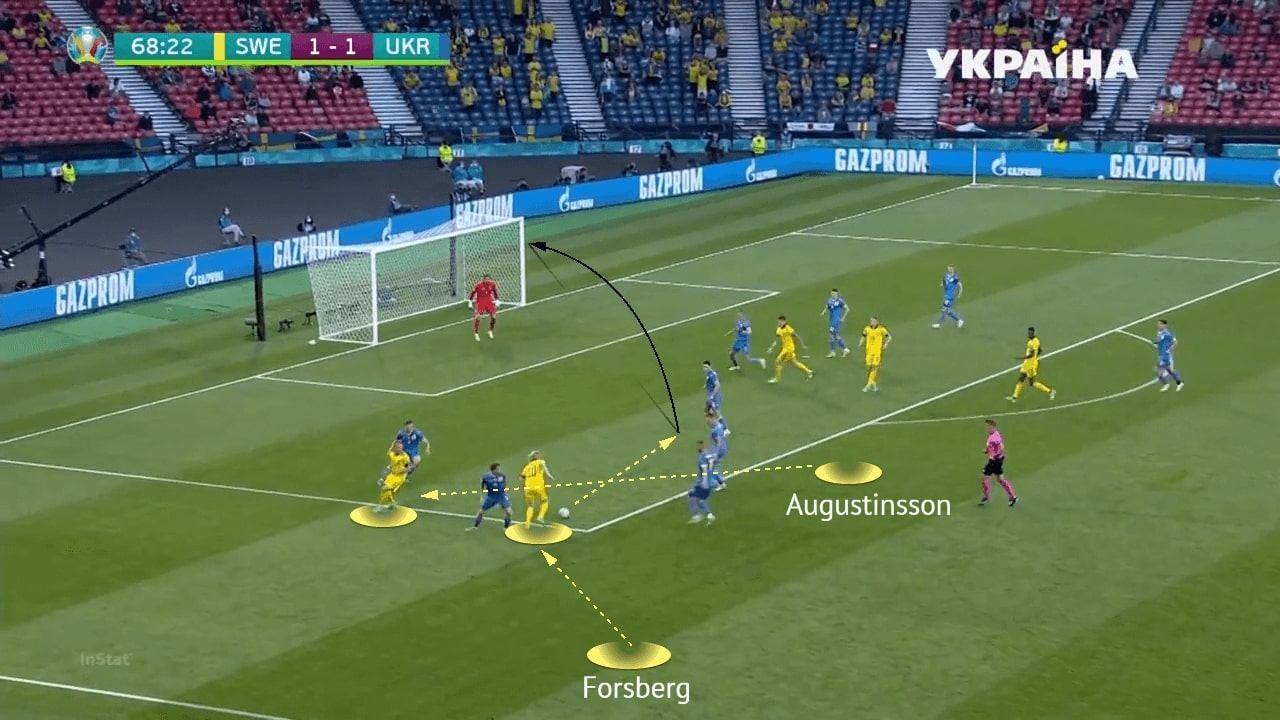 …… thanks to Augustinsson’s run, one of the best chances of Sweden was created. The left-back made a diagonal run towards zone 16 and got the attention of both Karavaev and Zabarnyi. When both Ukrainian defenders intended to cover Augustinsson, the inside channel for Forsberg to take the ball inside was enlarged, the RB Leipzig man had the room to shoot.

They were unfortunate to hit the frameworks a few times, Forsberg’s creativity and quality were a huge threat in the final third.

Apart from making functional runs to draw defenders away, Augustinsson could also become an outlet to cross on the left side. 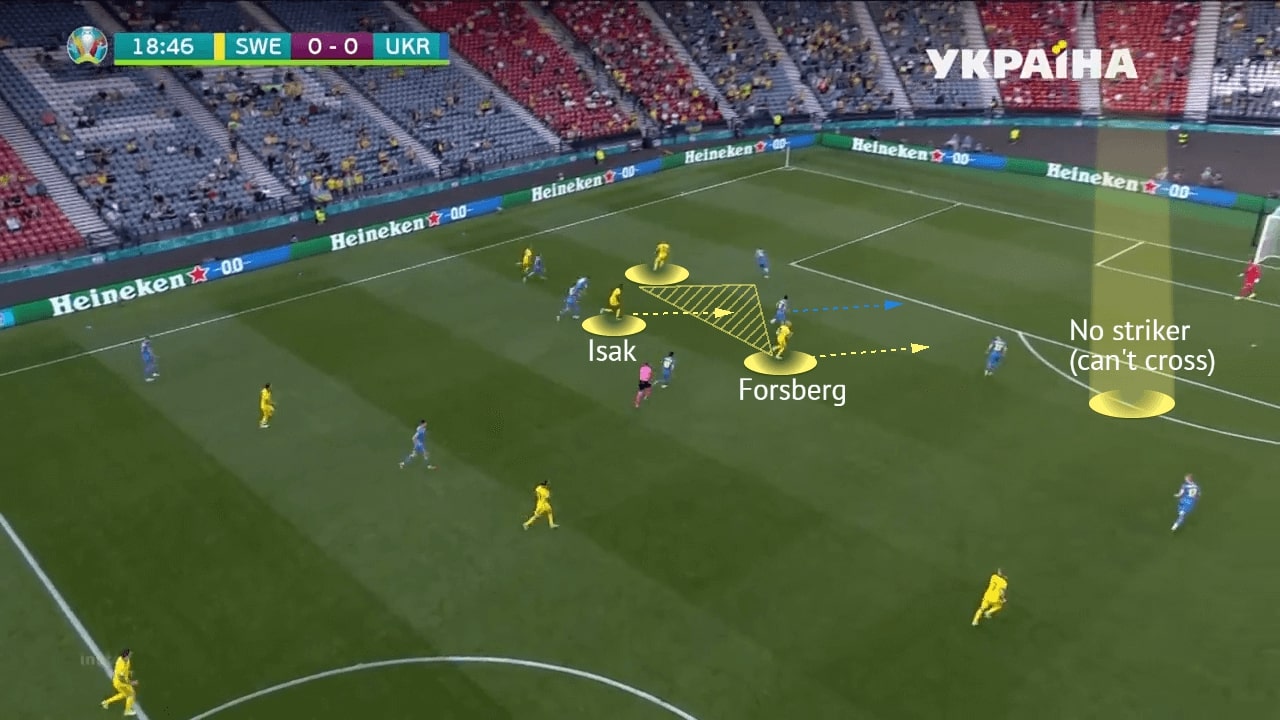 We saw a similar situation in the last example here. Forsberg made a diagonal run to the centre that drew Zabarnyi away. It opened the yellow spaces for Isak to drift into and shoot. The forward movements to force the defence deeper was vital to give the player the rooms in front of the defence.

However, the real issue was Sweden’s strikers – Kulusevski and Isak were too far away from the penalty box. When they dropped out to link plays, they would not be meeting the cross when it came in. In this example, Sweden could not get to the byline and whip in an early cross because of lacking striker options into the box.

It will be one of the most dramatic EURO games in history as Ukraine qualified by a late goal – Artem Dovbyk scored the winner at 120+1’ minute. It was the first time for the Ukrainian to play in the quarter-final, this was already a successful campaign for them. England were waiting for them in the next game.

We might be expecting more from Sweden as they also possessed quality attackers such as Isak and Kulusevski, but none of them were helping Forsberg a lot in this game. It was also probably the last time for some ageing Swedish players to start in a major competition, the team would need some refreshment and injection of young legs to fight in the future.