Belgium faced Italy in the quarter-final of EURO 2020 at Allianz Arena, Germany and the game ended with an Italian win thanks to the goals of Nicolò Barella and Lorenzo Insigne, despite the penalty awarded to Belgium which was scored by Romelu Lukaku. Italy therefore responded to all the critics which argued that Italy did not face a strong team yet and that they are unable to reach the later stages of the tournament. By excluding Belgium, they proved that they are on the right path since they performed well ahead of their encounter with Spain in the semi-finals.

In this tactical analysis, we will delve deeper into Italy’s tactics to explore why was their attacking performance convincing, how were they able to threaten Belgium’s goal several times, as well as how they managed to keep their advantage and stop Belgium’s excellent attacking players.

For this EURO 2020’s quarter-final, Roberto Martínez chose to start with the 3-4-2-1 formation after the recovery of the team’s star Kevin De Bruyne at the last minute. The team relied on Thibaut Courtois as a goalkeeper, Toby Alderweireld, Jan Vertonghen and Thomas Vermaelen as centre-backs, Thomas Meunier, Youri Tielemans, Axel Witsel and Thorgan Hazard in midfield with Kevin De Bruyne and Jérémy Doku playing just in front of them and behind the striker Romelu Lukaku.

While on the other hand, Roberto Mancini relied on his usual 4-3-3 formation with Gianluigi Donnarumma in goal, Giovanni Di Lorenzo, Leonardo Bonucci, Giorgio Chiellini and Leonardo Spinazzola in defence, Nicolò Barella, Jorginho and Marco Verratti as central midfielders with Federico Chiesa and Lorenzo Insigne playing as wingers behind the striker Ciro Immobile. 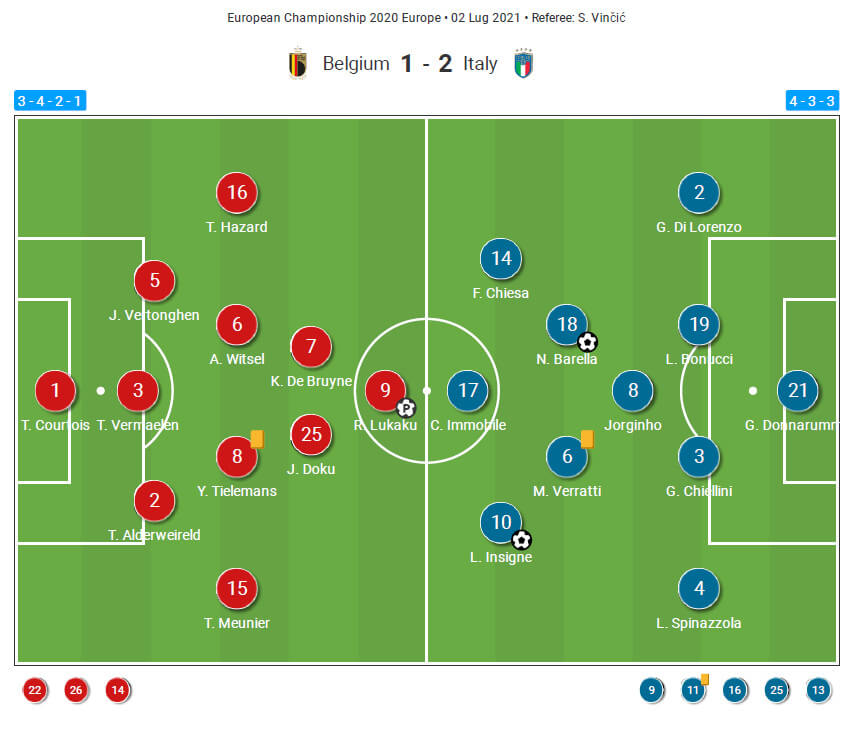 Italy started the match with determination to have possession and play the football that they used to play in the group stage to not repeat the average performance of the Round of 16. And at the same time, Belgium opted for leaving a lot of space to Italy and defend without pressing high in order to have the opportunity of launching dangerous counter-attacks relying on De Bruyne’s speed and penetrations and Lukaku’s efficiency inside the box.

However, Italy’s defensive players were usually attentive enough to this plan as Chiellini marked Lukaku tightly as soon as Belgium intercepted the ball, while Bonucci was always attentive to this duel and waiting to intervene and cover for his teammate if Lukaku goes past him.

In fact, Chiellini was the best in his team in terms of challenges won, with 78%. And this was noticeable when watching his challenges in defence despite his age and comeback from injury. 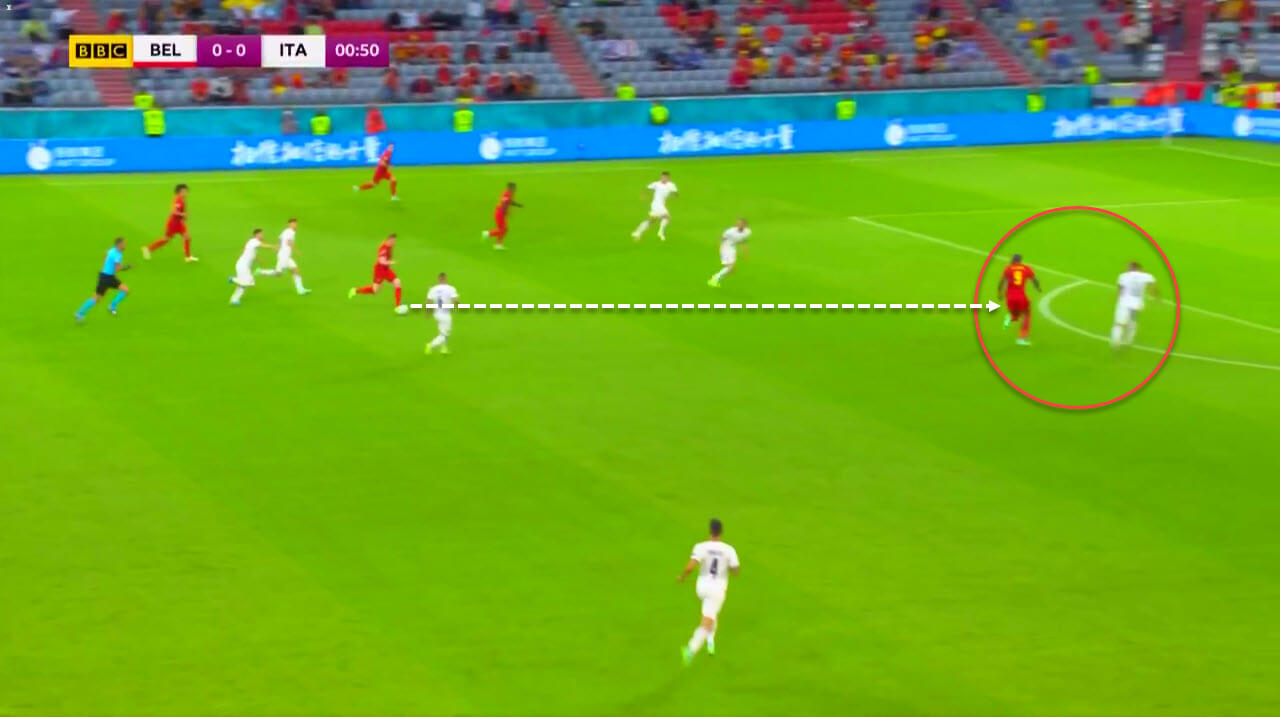 Nevertheless, Lukaku was able to find some little space to shoot and create some danger on a few occasions even though Chiellini continued in disturbing him and making it difficult for him to threaten the goal, sometimes with the help of Bonucci or one Jorginho, Barella, or Verratti. 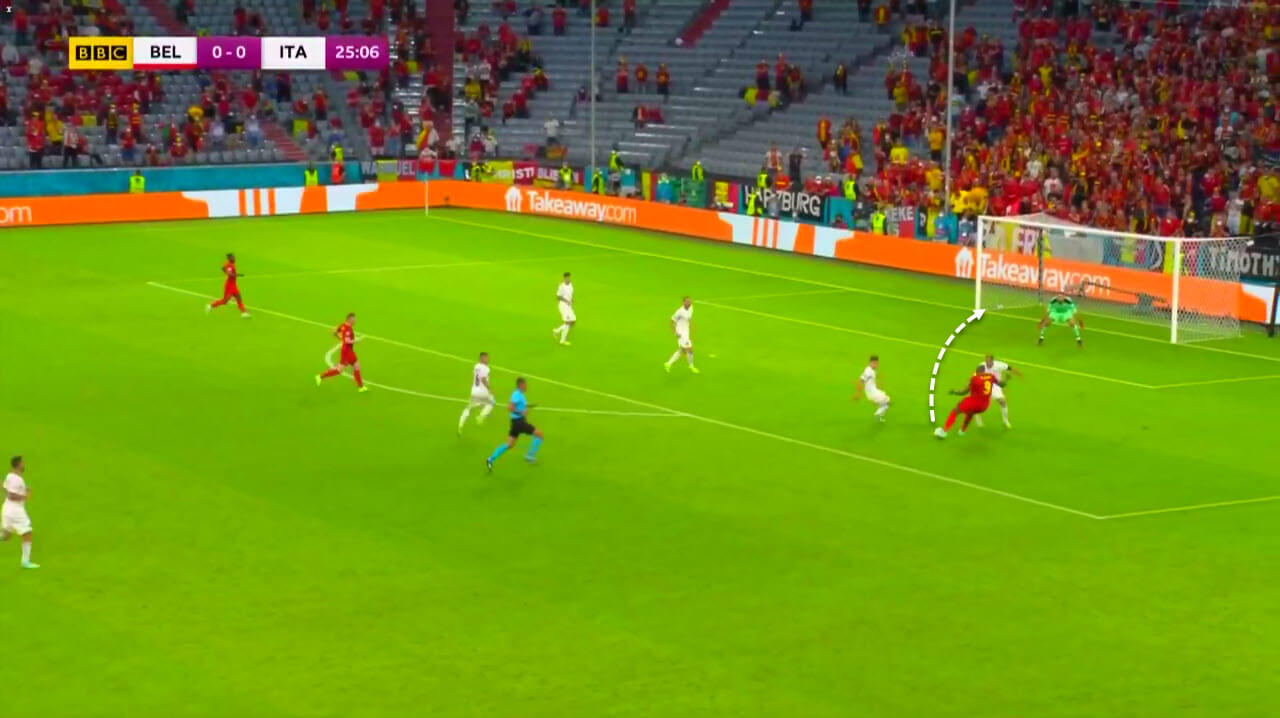 This man-marking limited Belgium’s attacking options and it especially made De Bruyne resort to shooting from distance so often given that Lukaku was usually marked and Doku was always leaning towards the left wing. Such defending limited the danger of Belgium’s best attacking weapon, counter-attacks. 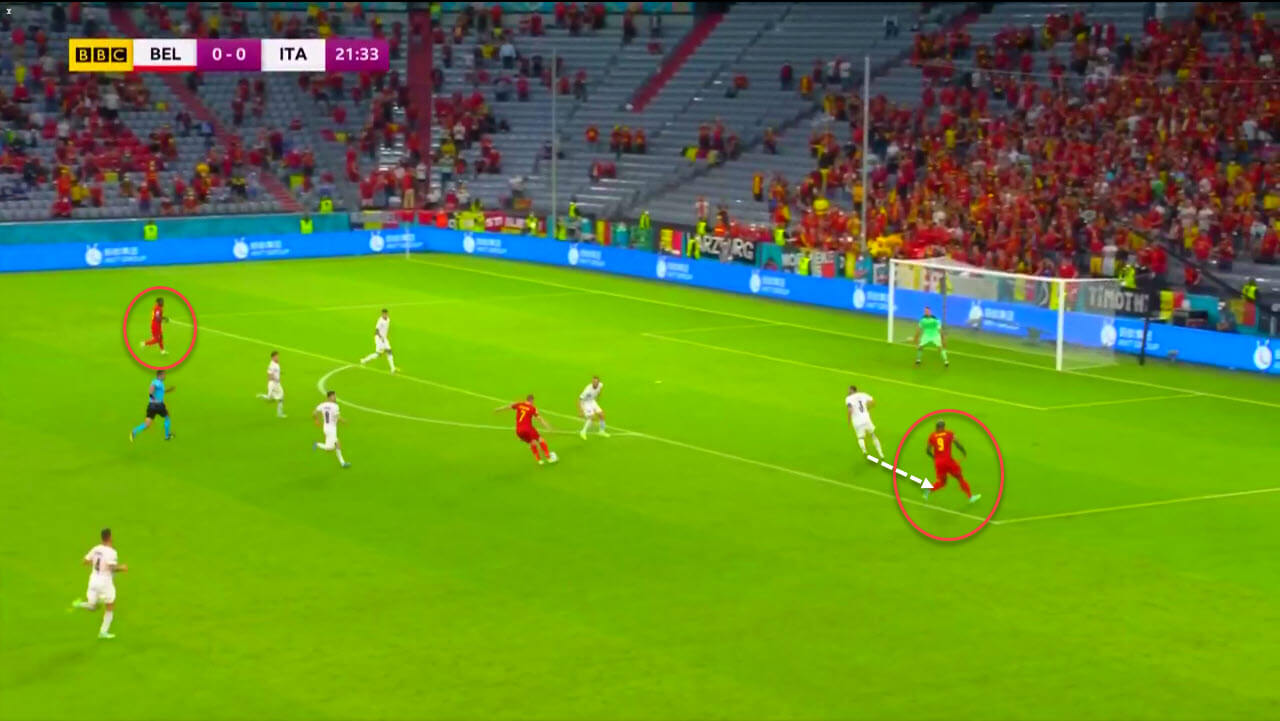 And at the same time, Italy defended with ten players whenever Belgium had possession and tried to build up from the back. This helped Italy a lot to make sure that they concede chances with 1 vs 1 or with numerical superiority since they are aware of the quality of their opponents’ attacking players. 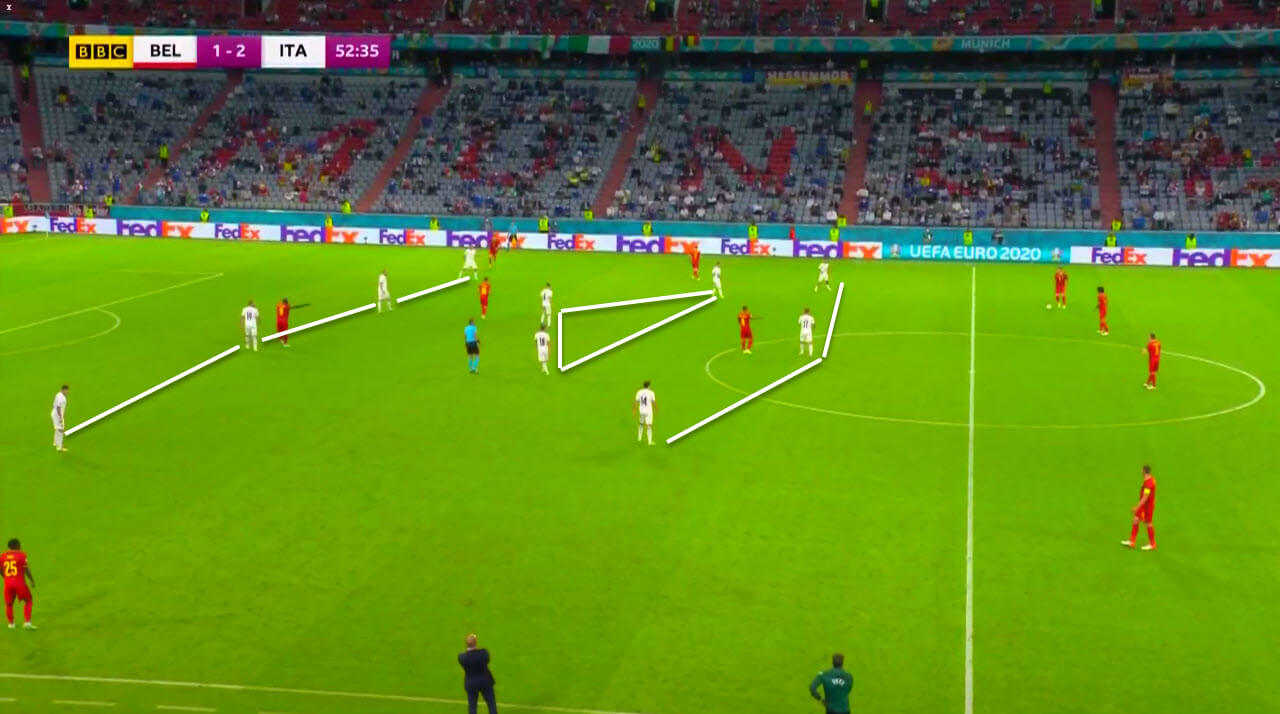 At the course of the second half, however, Belgium were so close to equalising thanks to the efforts of Doku who was one of Belgium’s best players in this match and if not for Spinazzola who was able to save the ball of the match when Lukaku was trying to put it inside the net, Belgium could have equalised and the game could have gone to extra-time.

Moreover, both Di Lorenzo and Chiesa defended well against Doku during the first half since they both alternated roles when defending and we saw Chiesa being positioned as a right-back on many occasions to prevent Doku from escaping on the wing given that Chiesa has a quick acceleration as well. And this is why in the times in which Doku faced Di Lorenzo, the latter struggled to keep up with his pace and committed a foul in the penalty box at the end of the first half. 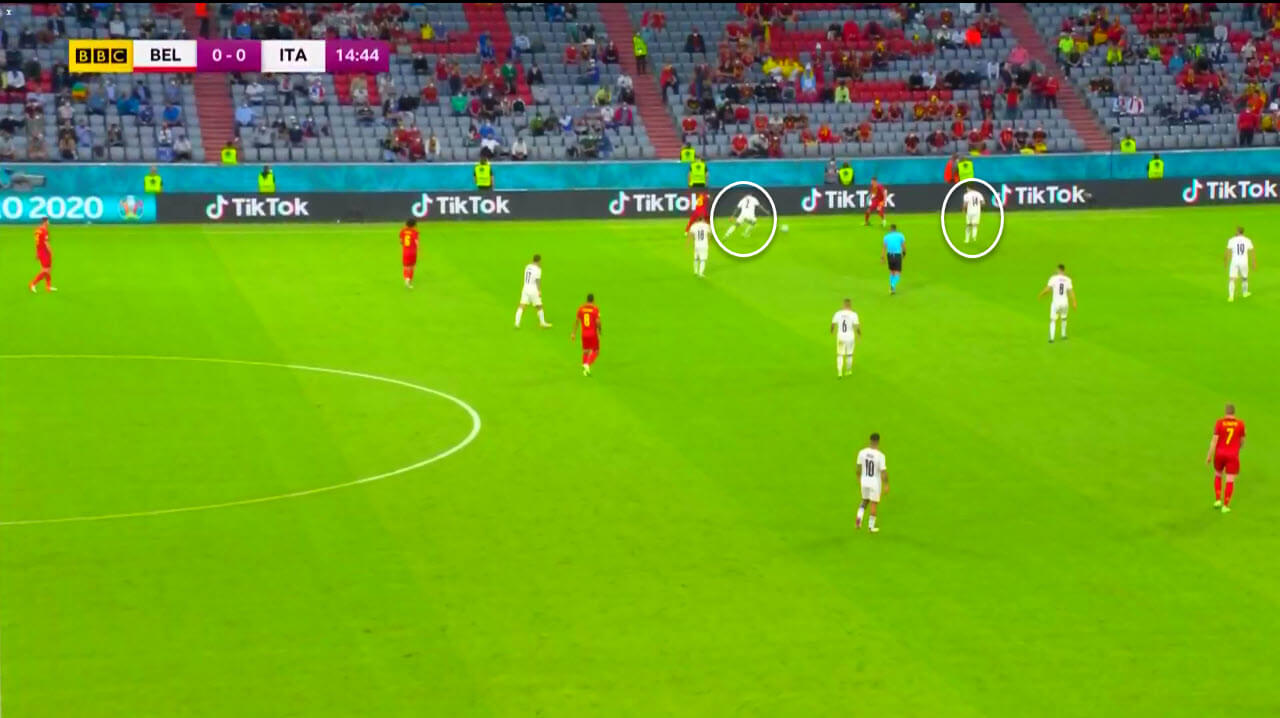 Italy’s attacking performance against Belgium was excellent even though they missed a lot of opportunities and could have converted more chances into goals, hence their conversion rate of 50%. Nevertheless, Italy exploited the fact that their opponent had some slow defenders to pass quickly whenever they reached the final third and look for 1 vs 1 duels especially through Chiesa, Insigne and Spinazzola who are all excellent at dribbling and in getting past defenders by relying on speed.

And although Immobile was not in his best form in this match, Insigne and Chiesa stepped up upfront and made a concrete impact in this match by moving a lot with and without the ball and creating continuous danger on Belgium’s goal.

Italy relied on both wings to threaten Belgium as Di Lorenzo and Spinazzola have always advanced to create combinations with Chiesa and Insigne, just like you can see below. This reliance on the wingers’ speed was successful and brought a lot of danger mainly because Belgium’s back-three remained narrow and were instructed to not leave space for Immobile. And although Belgium were successful in stopping Immobile, the danger came from all the other attacking players since Meunier and Hazard were not able to stop Spinazzola-Insigne and Di Lorenzo-Chiesa without help from the defenders. 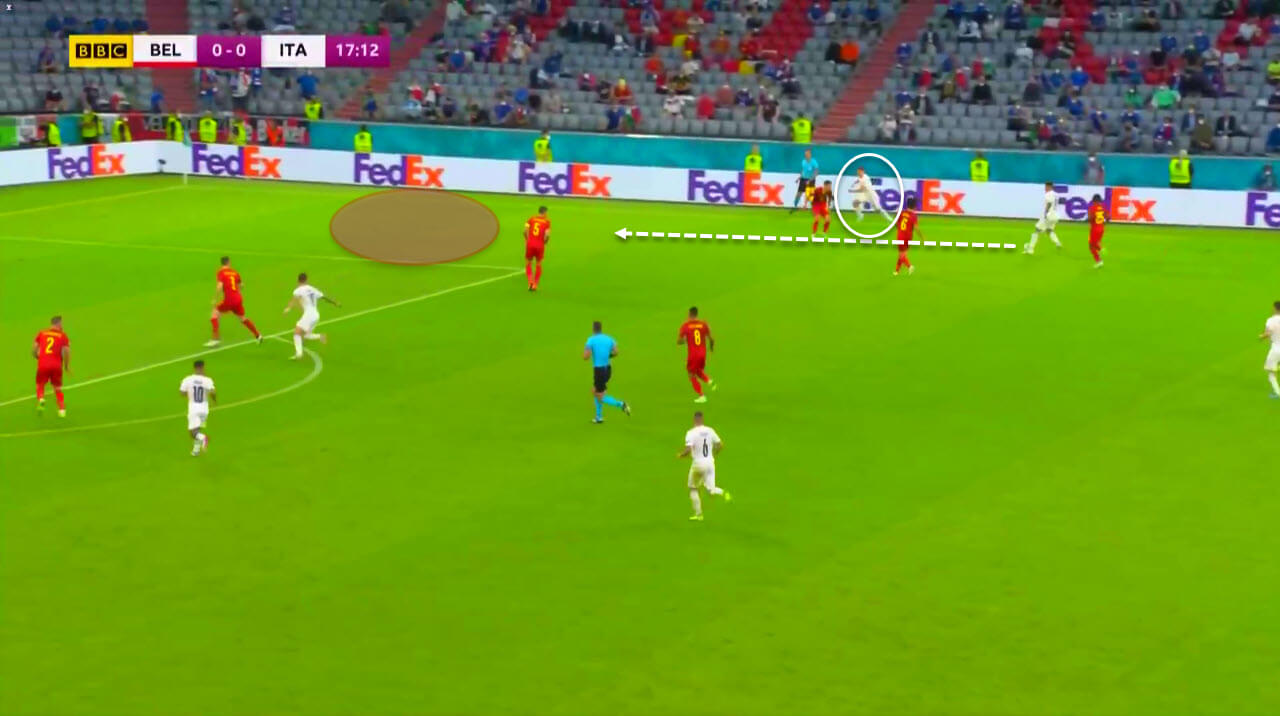 Although Immobile wasn’t effective due to marking and to a lack of form/concentration, he was useful in fixing defenders to allow some free space to the players coming from behind such as Insigne or Barella/Verratti. This happened numerous times and could have resulted in goals if the actions were played with more speed and accuracy.

And of course, Spinazzola was central to a large part of Italy’s actions either by his penetrations on the wing or by passing as you can see in this picture. It should be said however that his crossing attempts in this match were not as successful as in the previous matches and his dribbles were often intercepted by Belgium’s defenders, especially in the first-half. 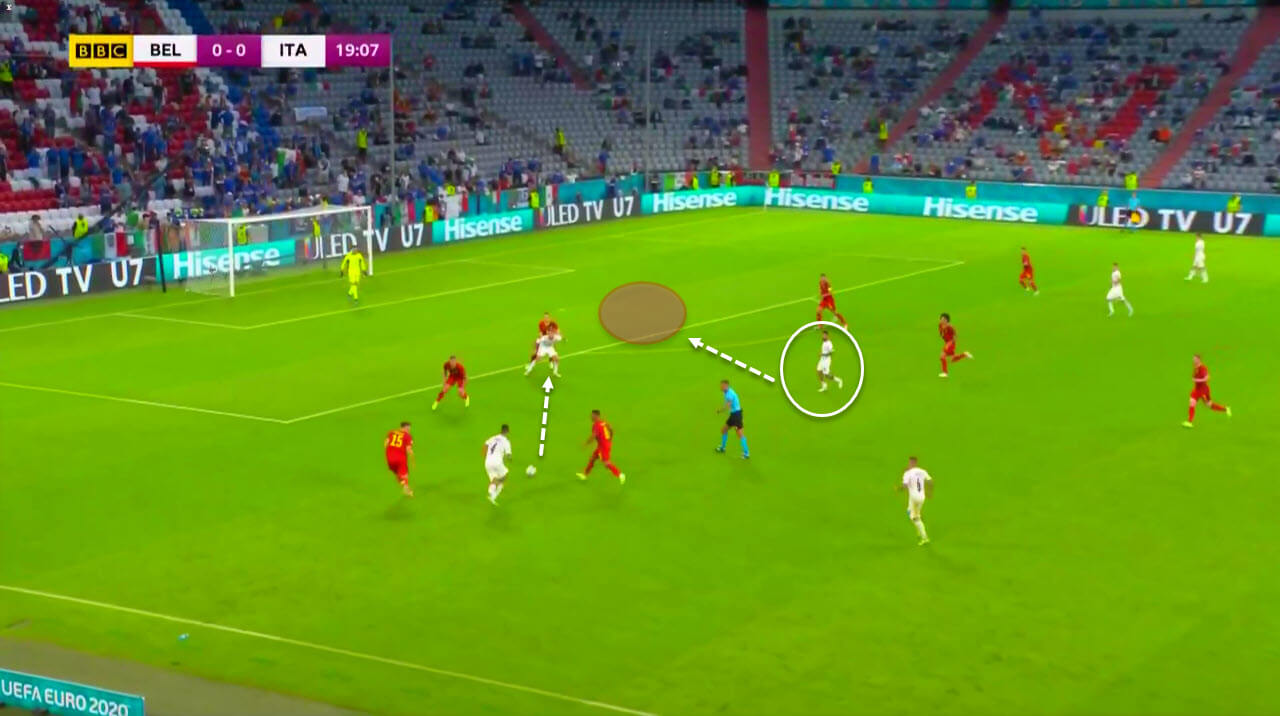 What made this Italian performance more positive was the excellent possession of the ball and the smooth/accurate passing throughout the match. When looking at statistics, we note that Jorginho has got 100% in passing accuracy, Verratti with 97%, Insigne with 91% while Spinazzola, Chiellini and Bonucci all having 90%.

These high numbers of passing accuracy make Italy’s build-up and attack simpler to execute and entertaining to watch, given that the confidence with which these players passed the ball allowed them to think of their next actions before even receiving the ball. And that’s exactly what makes the difference and makes teams gain time over their opponents.

The Azzurri’s first goal came thanks to an interception of Verratti who was excellent in this regard along with Jorginho. Then, Barella’s solo effort was crucial to scoring this first goal since he escaped from three Belgium defenders in a second while deciding to accelerate and shoot the ball quickly to prevent the goalkeeper from having time to save it.

Although Barella deserves all the praise for the great action he did, it should be said that the reaction of Belgium’s defenders (mainly Vermaelen) was worrying since they were all surprised and no one even thought of making a sliding tackle to deviate the shoot or try to even touch the ball. 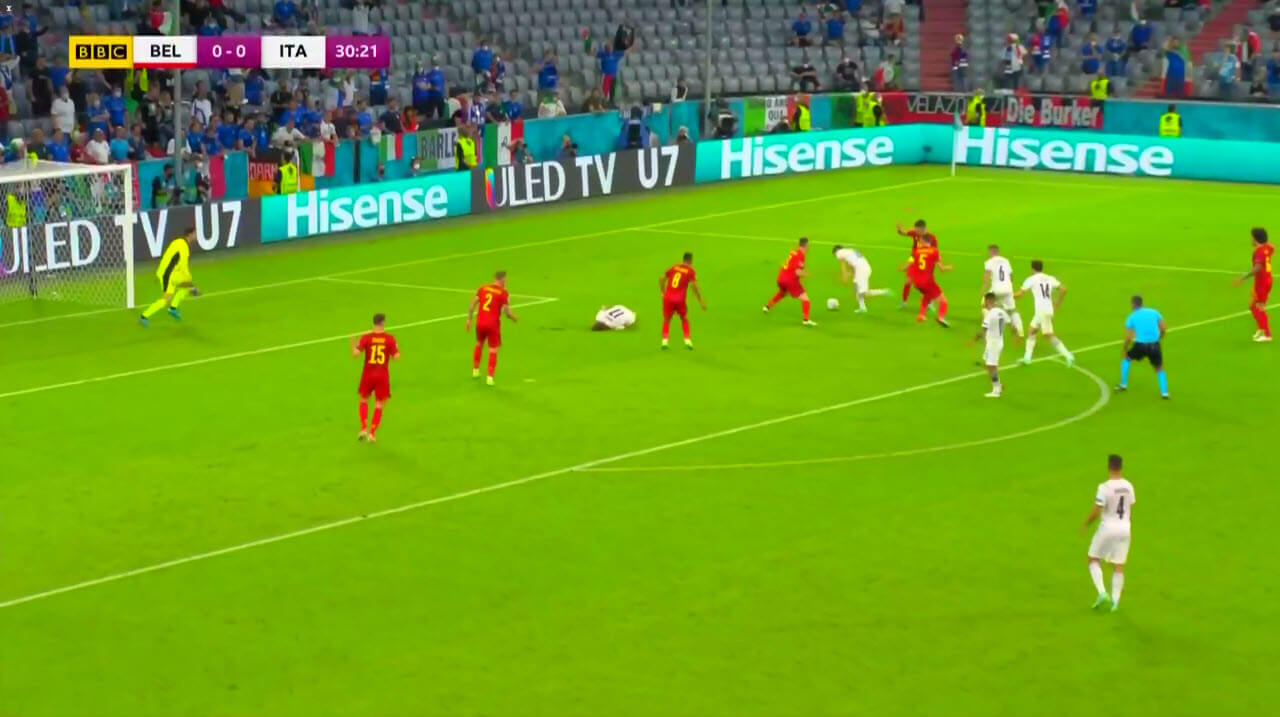 Italy’s second goal was Insigne’s trademark goal that he was trying to score since the start of the tournament. Fortunately for him, it took place at the best possible time and during the most difficult match. Insigne played one of his best games for Italy and was very dynamic not only when he had the ball but also when he didn’t have it given that he often positioned himself as an advanced playmaker and left the left wing for Spinazzola whenever he advanced to confuse Belgium’s defenders.

In the following goal action he was quick enough to dribble past Tielemans and directly aim at the goal from his preferred position, and the result was one of the most beautiful goals of the tournament. 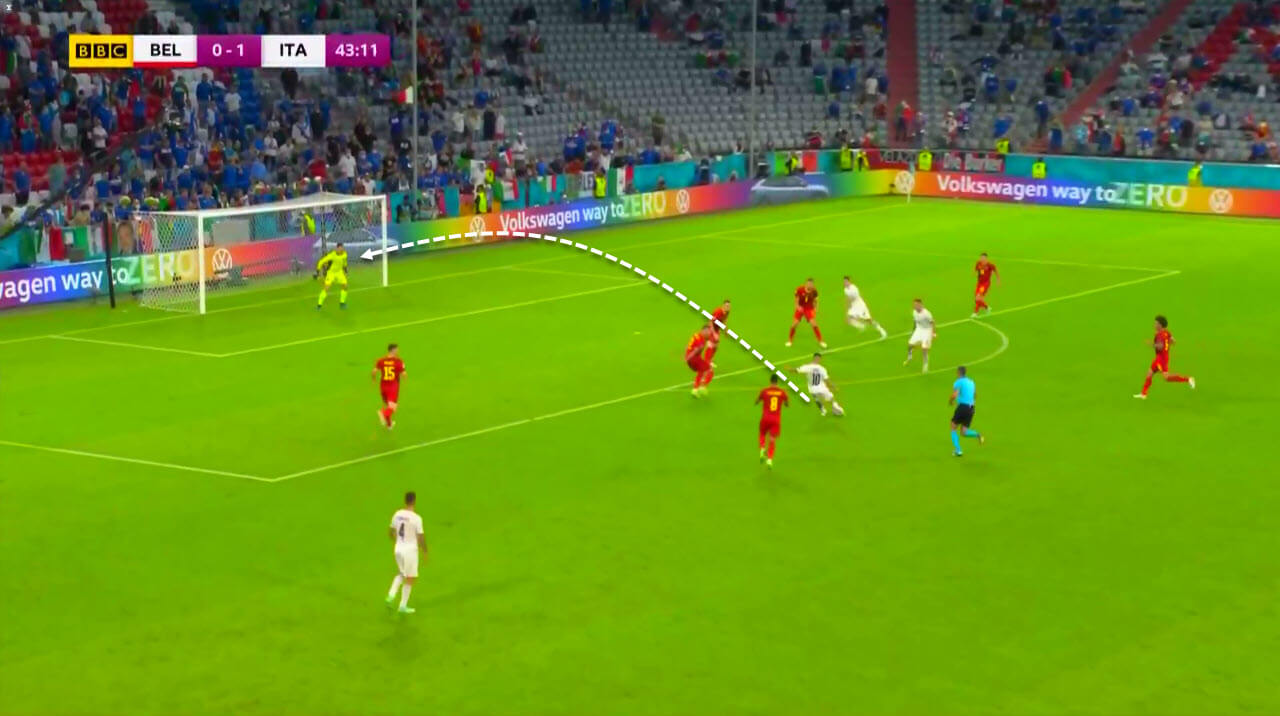 By winning against Belgium and qualifying for the semi-finals, Italy were able to make up for the failure of the World Cup 2018’s qualification as they will be looking forward to battling against Spain for a final ticket against the winner of Ukraine/England vs Czech Republic/Denmark.

For Belgium, a lot of things need to be improved for the upcoming tournaments and perhaps the most urgent task is to improve the defensive performance of the team and find better defensive tactics/players.