The quarterfinals of an unpredictable NWSL Challenge Cup brought us a match-up between OL Reign and Chicago Red Stars. Both teams considered themselves legitimate title contenders but also recognized they had room to improve before reaching the final. After analysis, we see that Reign manager Farid Benstiti (who previously reached the 2010 Champions League final with Olympique Lyonnais) is beginning to implement an attacking tactic reflective of positional play in how players manipulate space and their location to create attacking opportunities. We also found that Chicago applied a direct form of attack to apply constant pressure on the Reign side. This tactical analysis will look into how it all played out.

Chicago entered the match with the intention to play direct with large doses of passes into the space behind the OL Reign defensive line. We see this in the fact that Red Stars attempted 15 through passes compared to Reign’s 3. Through passes in this context can be described as “a pass played into the space behind the defensive line for a teammate to contest.

This led to Chicago achieving 6 deep completions: a pass (excluding crosses) that are received in a 20-meter radius from the opponent goal line. Chicago executed this by using dropping and drifting movements of midfielders and wingers to create attacking space for forward Rachel Hill.

The most common off the ball movement was right-wing Katie Johnson drifting inwards to draw the presence of Reign left-back Lauren Barnes.

We can see evidence of this in the average position graphic below. #33 (Johnson) is not pushed high but tucked into the right halfspace significantly underneath #5 (Hill). This was not the only attacker found dropping into space to create space for Hill, but Barnes was the most targeted player due to her aggressive positioning in Reign’s attacks. 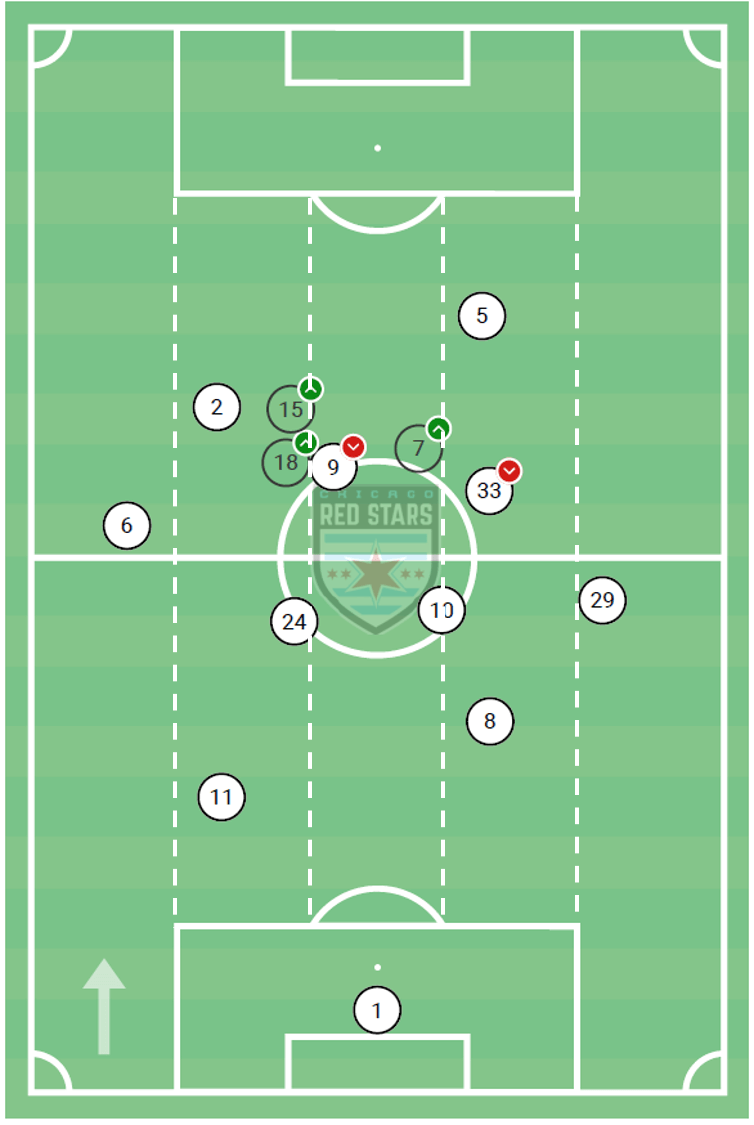 Below we can see a moment midway through the first half. Vanessa DiBernardo has received the ball and turned her vision up the pitch. She can quickly see that Johnson is deep in the right halfspace and subsequently Barnes is beside her as well.

Dibernardo quickly chips the ball into the space left behind Barnes for Hill to run onto. 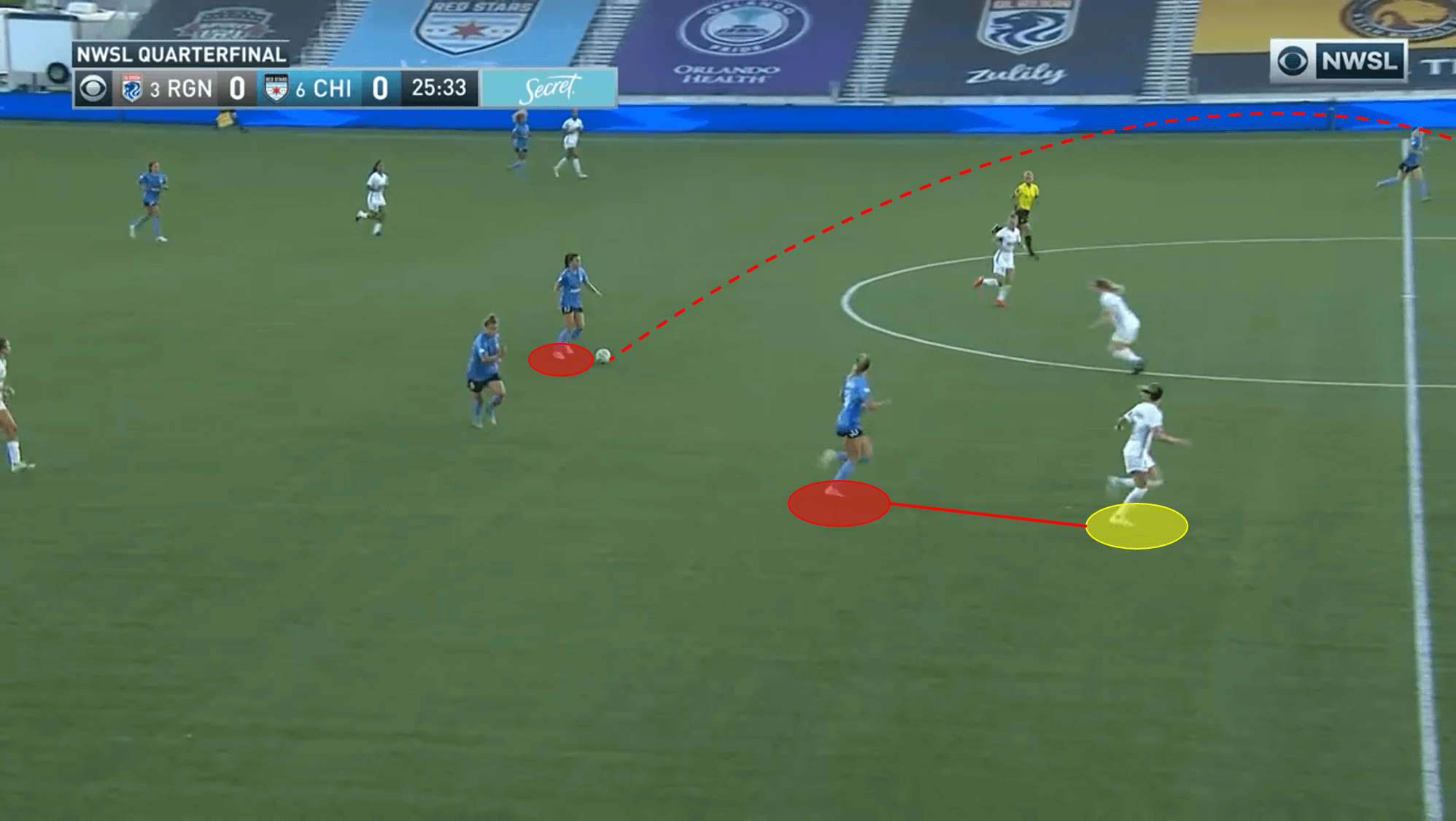 Hill is able to penetrate forward to receive the ball but is unable to create a chance on goal in this moment. 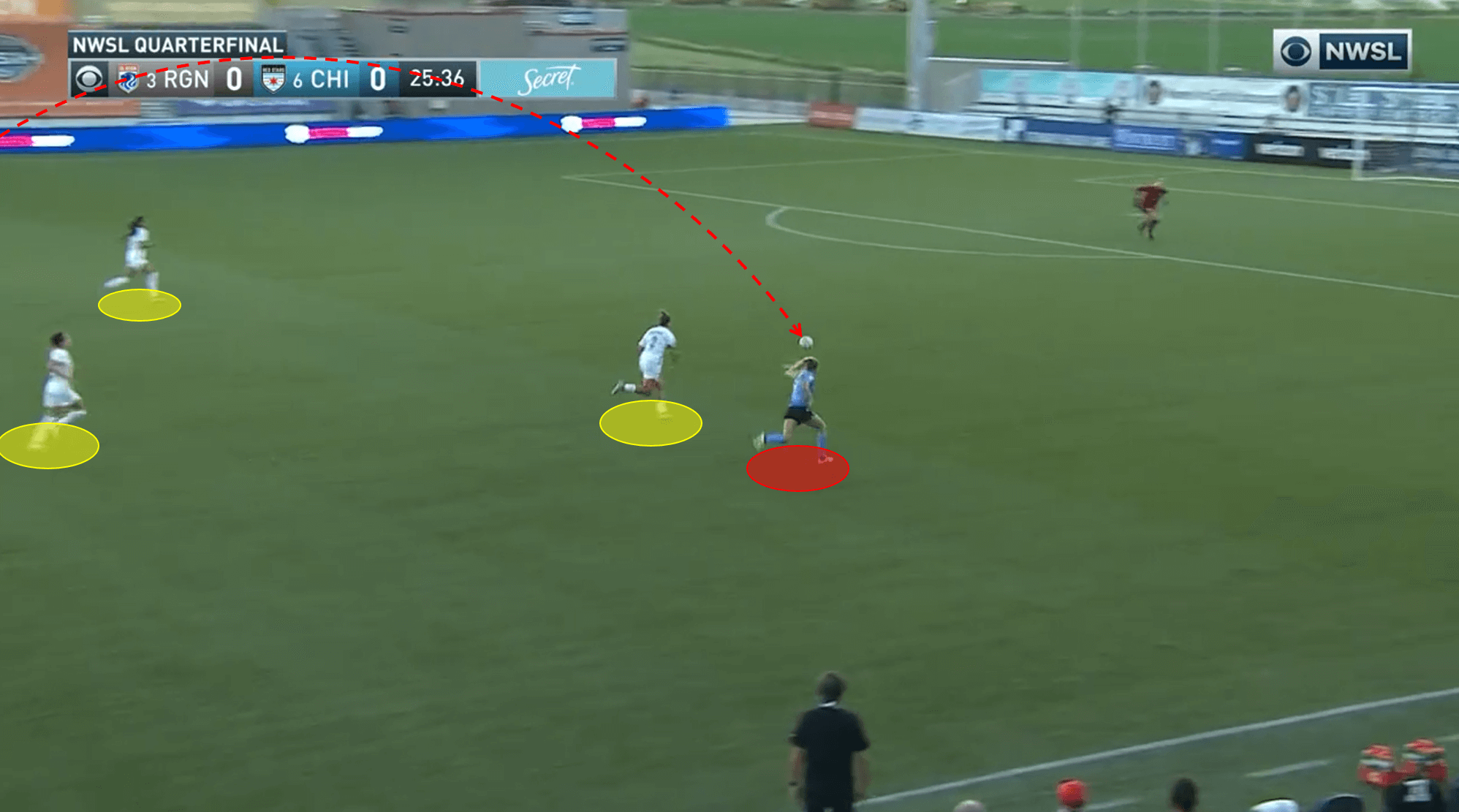 Chicago used this tactic often throughout the match to not only quickly get behind the Reign defensive unit but to also play over a Reign press when initiated. The Red stars found themselves able to enter the attacking third on multiple occasions, but unable to create chances of enough quality to create tallies on the scoreboard.

Reign’s approach to the match when in possession appeared to be a patient one. While both OL Reign and the Red Stars had around 100 possessions as a team each (107 and 100 respectively), Reign’s phases of possession were typically longer.

Reign prioritized retaining possession of the ball while poking and prodding up the pitch to find paths to progression, but what were they looking for specifically?

During the first water break, OL Reign assistant coach Sam Laity shed some light by stating that Reign needed to “create more space for their teammates when they are off the ball and also gain more space when in possession to take on Chicago’s defence.”

When not applying a press, Chicago tended to fall into a compact midblock. Throughout the match, we could see themes in how Reign sought to manipulate the Chicago defensive shape by using off the ball teammates to create space and aggressively gain said space.

In the twenty-seventh minute, we saw a passage of play that fully personified Reign’s attacking tactical priorities. Reign were building out of the back by playing the ball to their centrebacks, who were positioned in the halfspaces. Chicago were prioritizing occupying the central channel but turned out to play into Reign’s hands.

We can see in the picture below that Reign left-back Barnes is able to push upfield unnoticed because her marking opponent, Red Stars winger Johnson, is focused on an off the ball movement of a Reign midfielder. Although the Reign midfielder’s movement is not done with the intention of receiving the ball, the movement itself is allowing the team to initiate an attack. 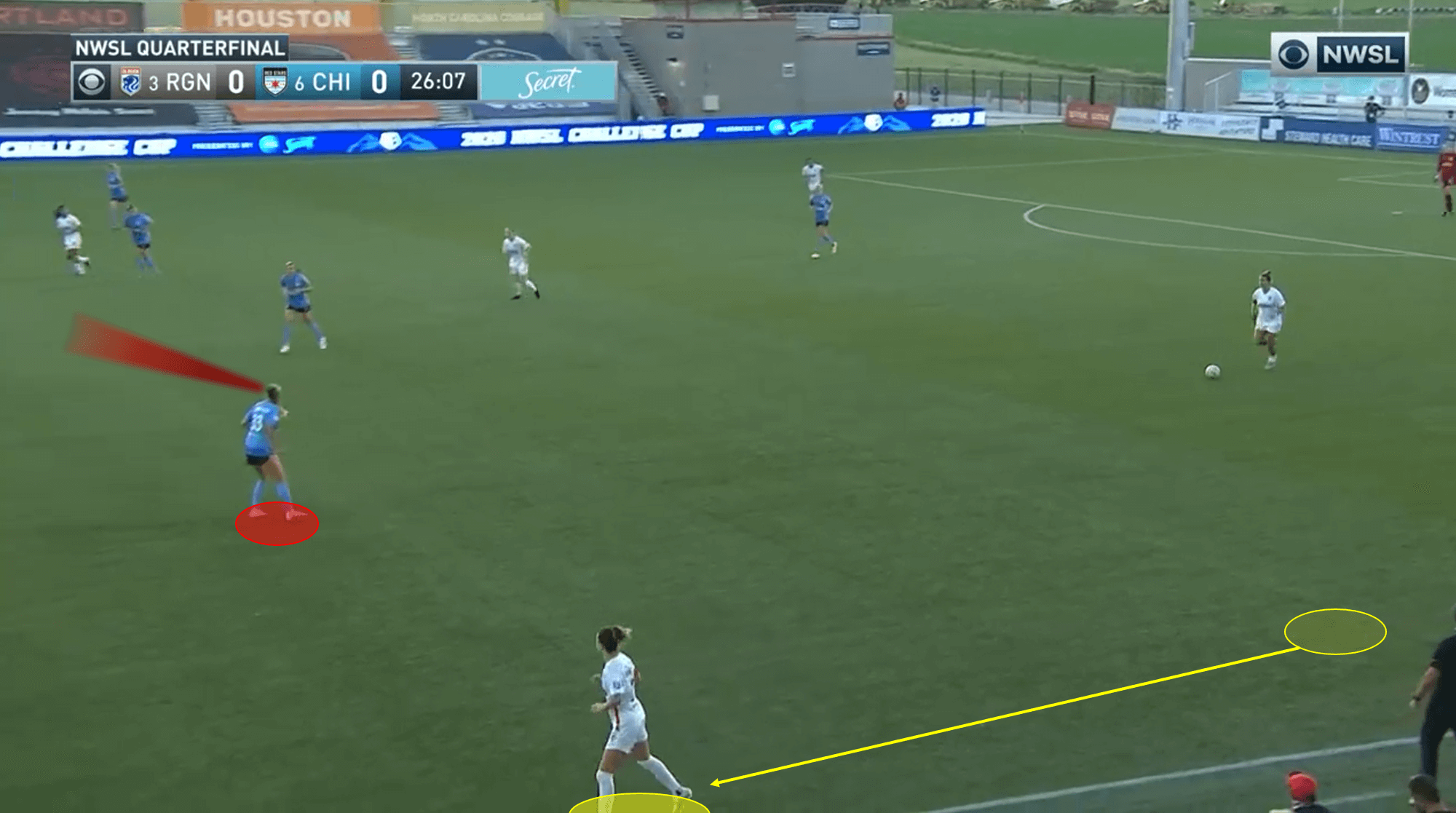 Barnes is able to position herself beyond the first line of pressure and receive the ball unmarked. Thus Reign was able to use create space for the outside backs through the movements of central players. As soon as Barnes receives the ball, she is pressured frontally by Red Stars right-back Bianca St. Georges.

St. Georges’ pressuring movement produces space behind her for nearby forward Jodie Taylor to move into. Barnes initiates a 1v1, bypasses St. Georges and releases the ball forward to the feet of Taylor. 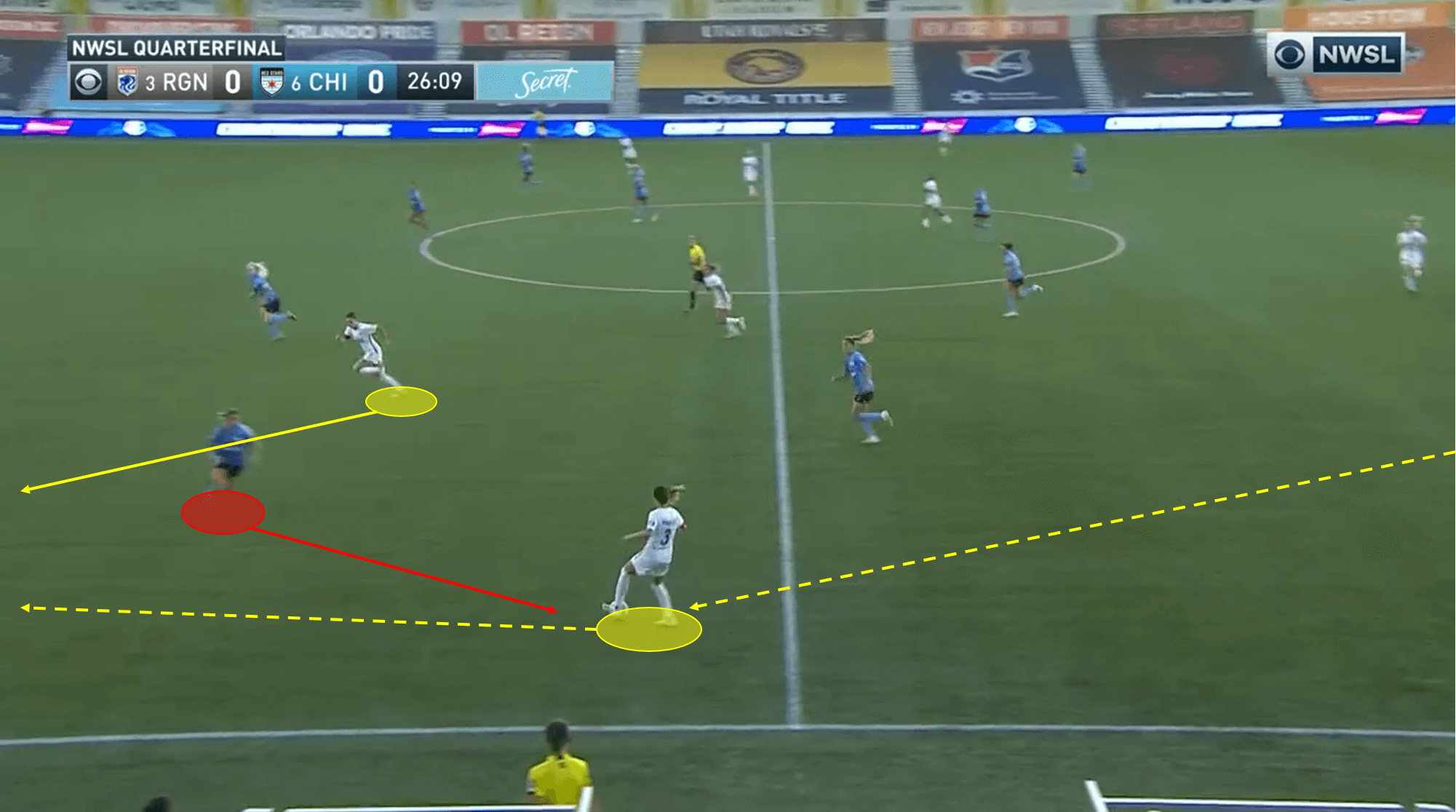 Now that St. Georges has pushed forward, effectively out of the Chicago backline, Julie Ertz must now close down Taylor on the flank to prevent her forward access. This causes Ertz to leave her central position and vacate valuable space. As Ertz approaches Taylor, central midfielder Sofia Huerta immediately moves into the space left by Ertz 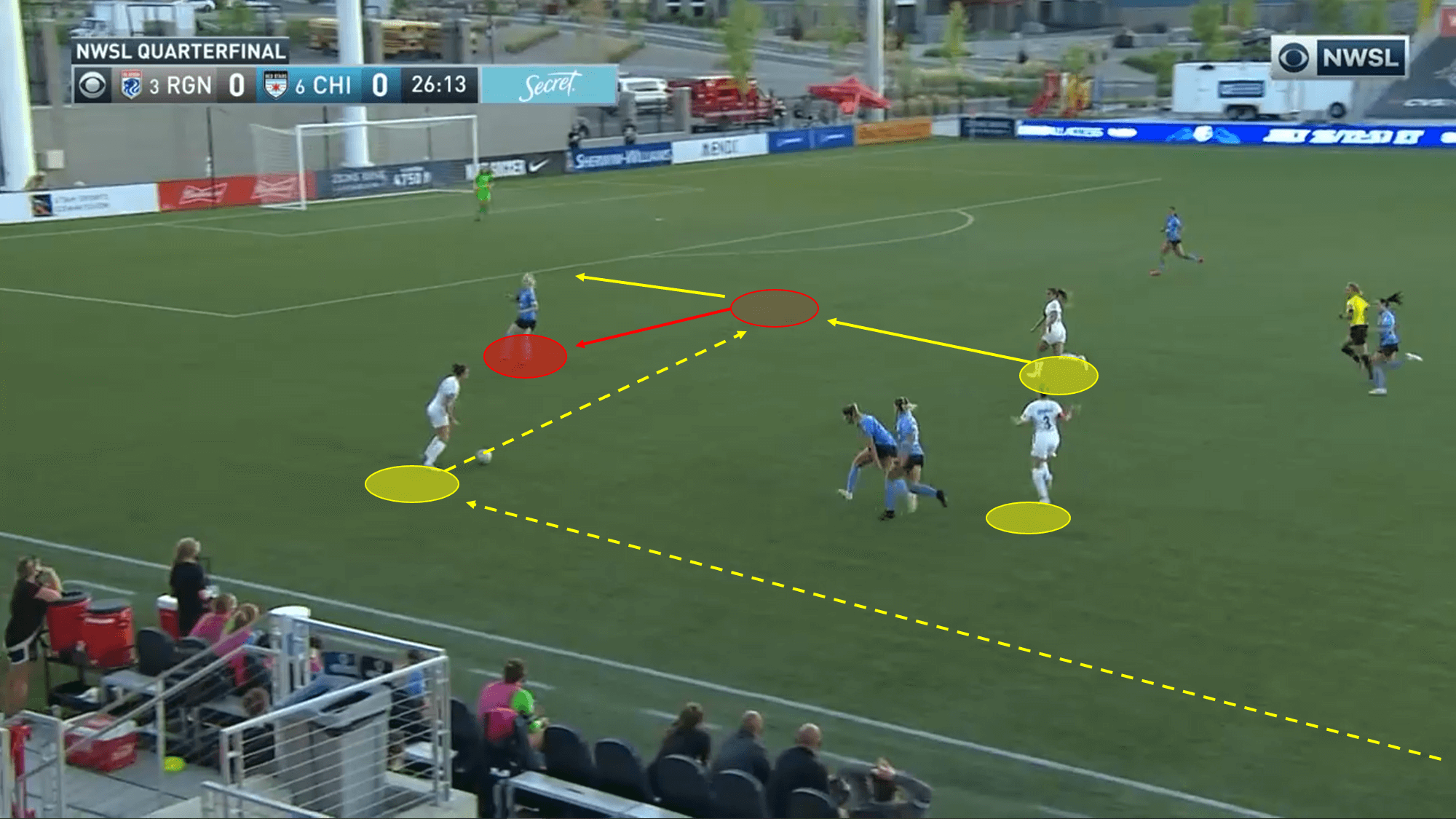 These off-the-ball movements allow the Reign attackers to create a temporary 2v1 against Ertz in her own backline. Taylor releases the ball to the feet of Huerta, who is able to sidestep a diving Ertz. Unfortunately for Huerta, Ertz’s defensive effort is just enough to disrupt the play and prevent a chance on goal.

As said by their assistant coach, Reign sought to use off the ball movements to create space for forward advancement with a priority on aggressive vertical progression. In the example above we can see that when Reign execute these tactics correctly, they were able to progress from the defensive third to the attacking third in six seconds using three players.

What might go unnoticed is her ability to assess the field and make quick and accurate decisions in that moment. This spatial awareness and vision allow her to create maximum positive impact for her team in all phases of the game. While she was a top defender in the league for 2019, she also ranked in the top 10 in passes to the final third with 8.5 per 90’. This is significant, considering that most of the top 10 are midfielders, a position better suited for creating passes to the final third.

This match offered us a few examples of why Julie Ertz can be considered a global talent. Her vision and ability to intelligently manipulate opponents shone throughout the match.

In an early moment in the match, Reign were able to win the ball in the midfield and initiate a counter-attack. As Red Stars were retreating and Reign attackers progressing, all nearby players had their eye locked on the ball and its carrier. 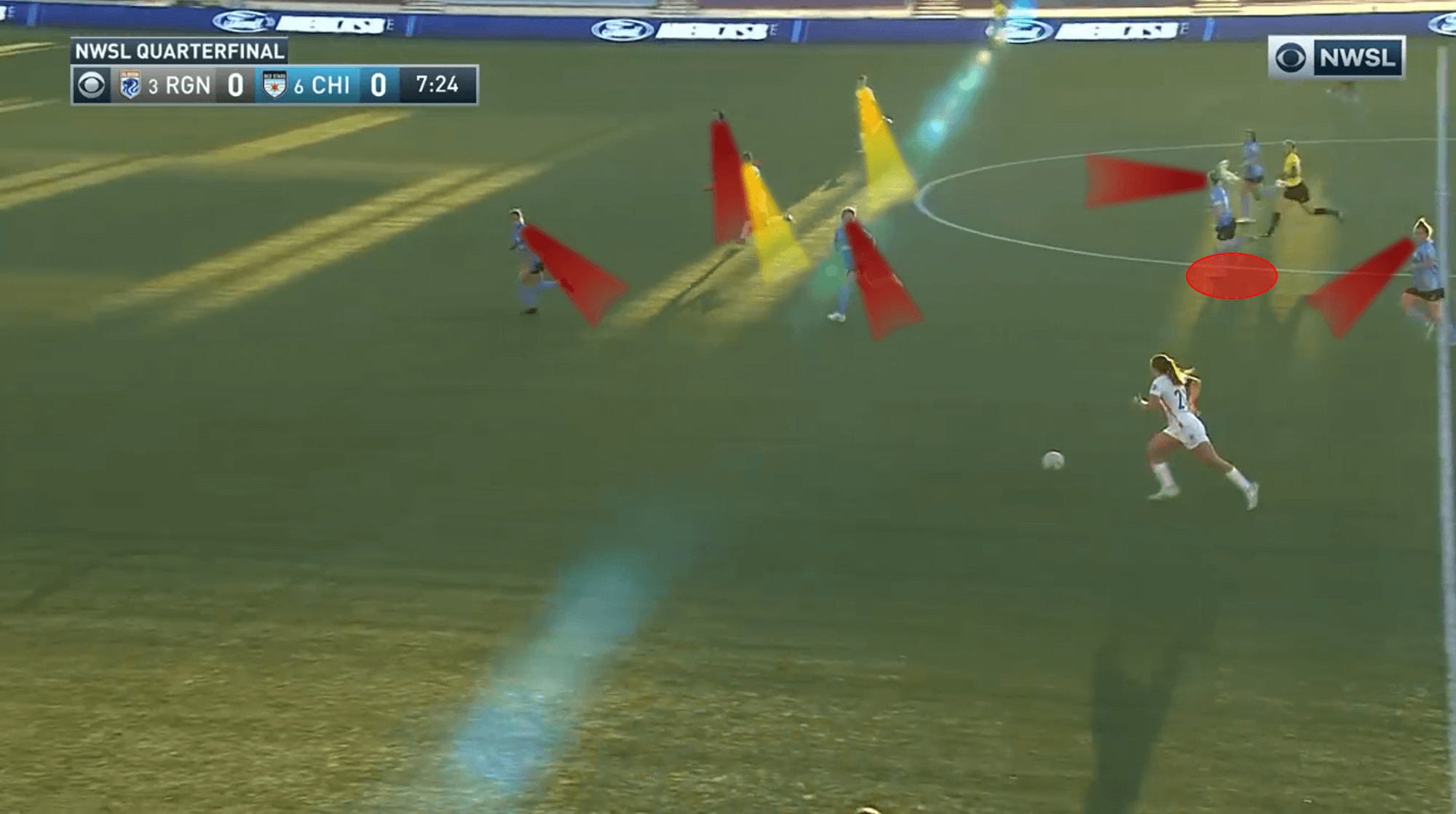 Ertz was found not looking at the ball, which she knew would be moving straight forward, but was looking at her temporarily exposed backline. In this moment, Ertz was found assessing the tactical situation in real-time to make an optimal decision. She was also able to communicate situational dangers to her teammates as Chicago began to regain their defensive shape. The attack was quickly snuffed out.

Ertz’s vision and awareness allowed her to not only defend well as an individual but to also guide the Red Stars as a whole to be better prepared in potentially negative tactical situations.

She was also able to affect the game when in possession with her vision, ability to read the game and ability to manipulate direct opponents. Below we have a moment in which Ertz has received the ball in the central channel at the base of the middle third of the pitch. Immediately, Ertz has her eyes scanning the field and sees space for her to exploit. She begins to dribble forward. 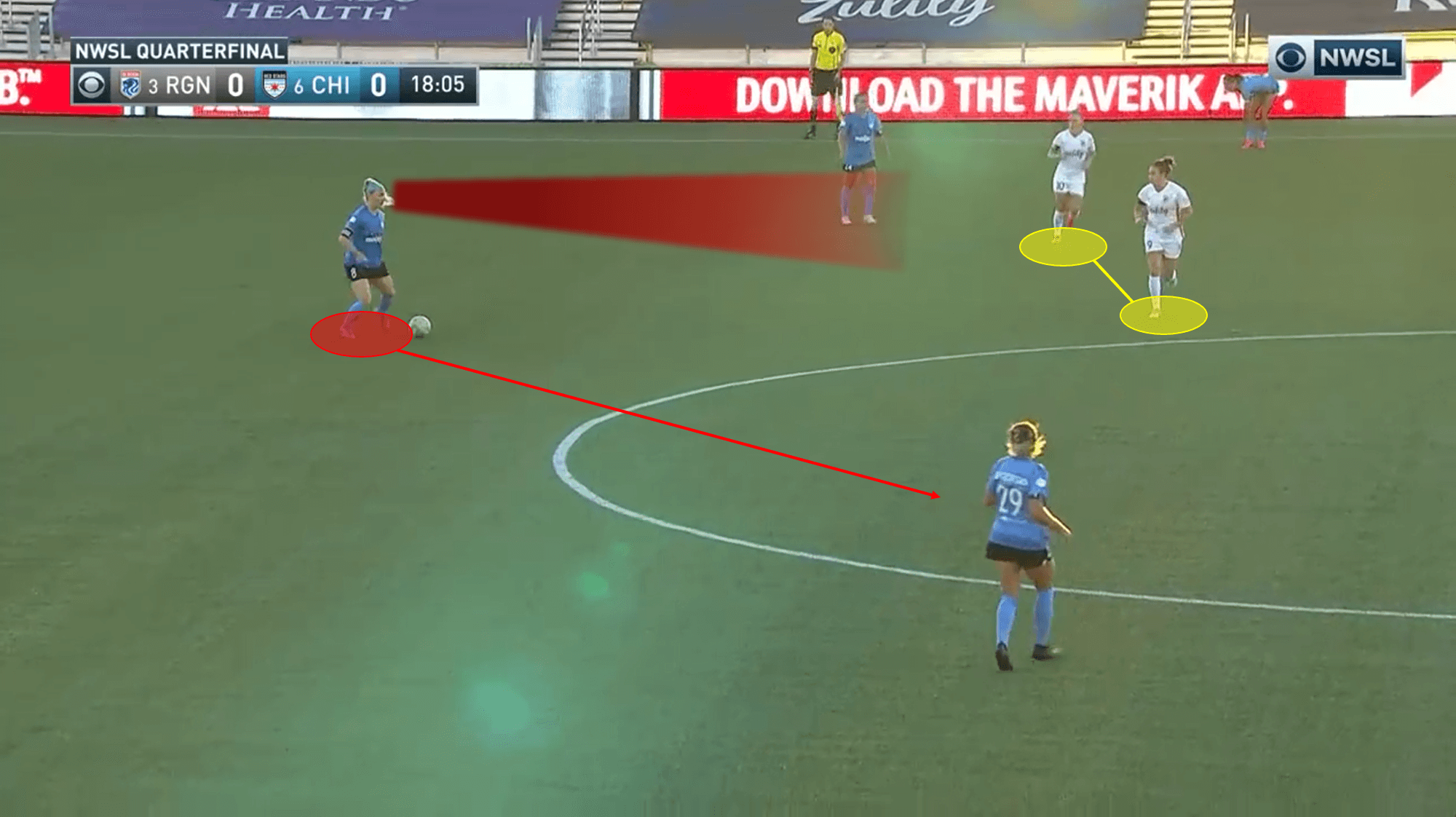 As Ertz dribbles forward she achieves two things: A) she draws pressure from two nearby Reign attackers, opening space for her teammates to receive in. B) She indicates with her body language and eyes that she will be passing forward to the feet of Johnson. This indication draws Reign left-back Barnes into pressuring Johnson from behind. 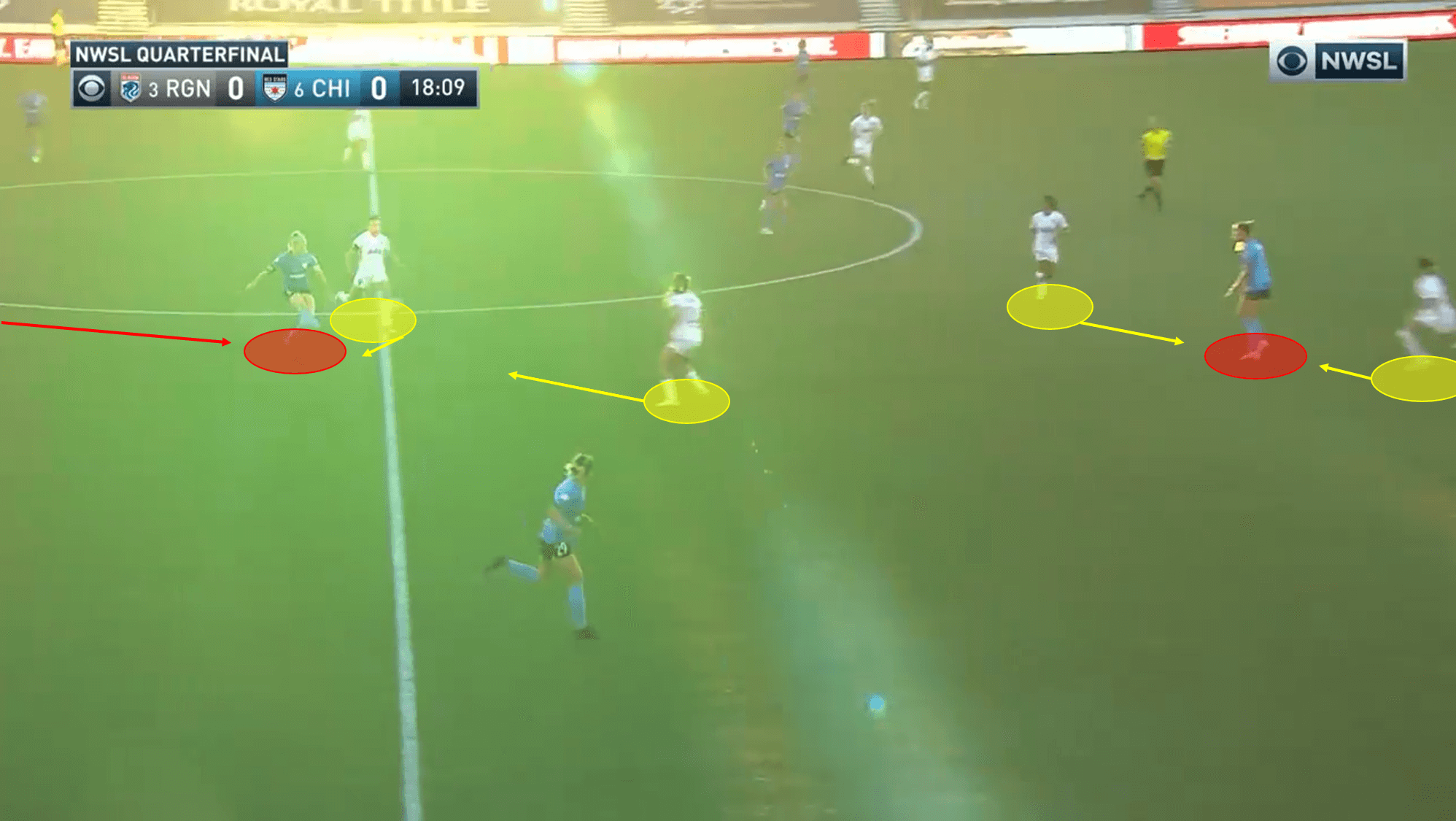 Unknown to multiple Reign players, Ertz’s real intention lay in an attacking player out of their eyesight. Ertz plays the ball over the Reign midfield and defensive lines into space for Hill to run onto. As we can see in the image below, Ertz’ dribble and deception have opened a large amount of space for Hill to receive the ball and attack from. 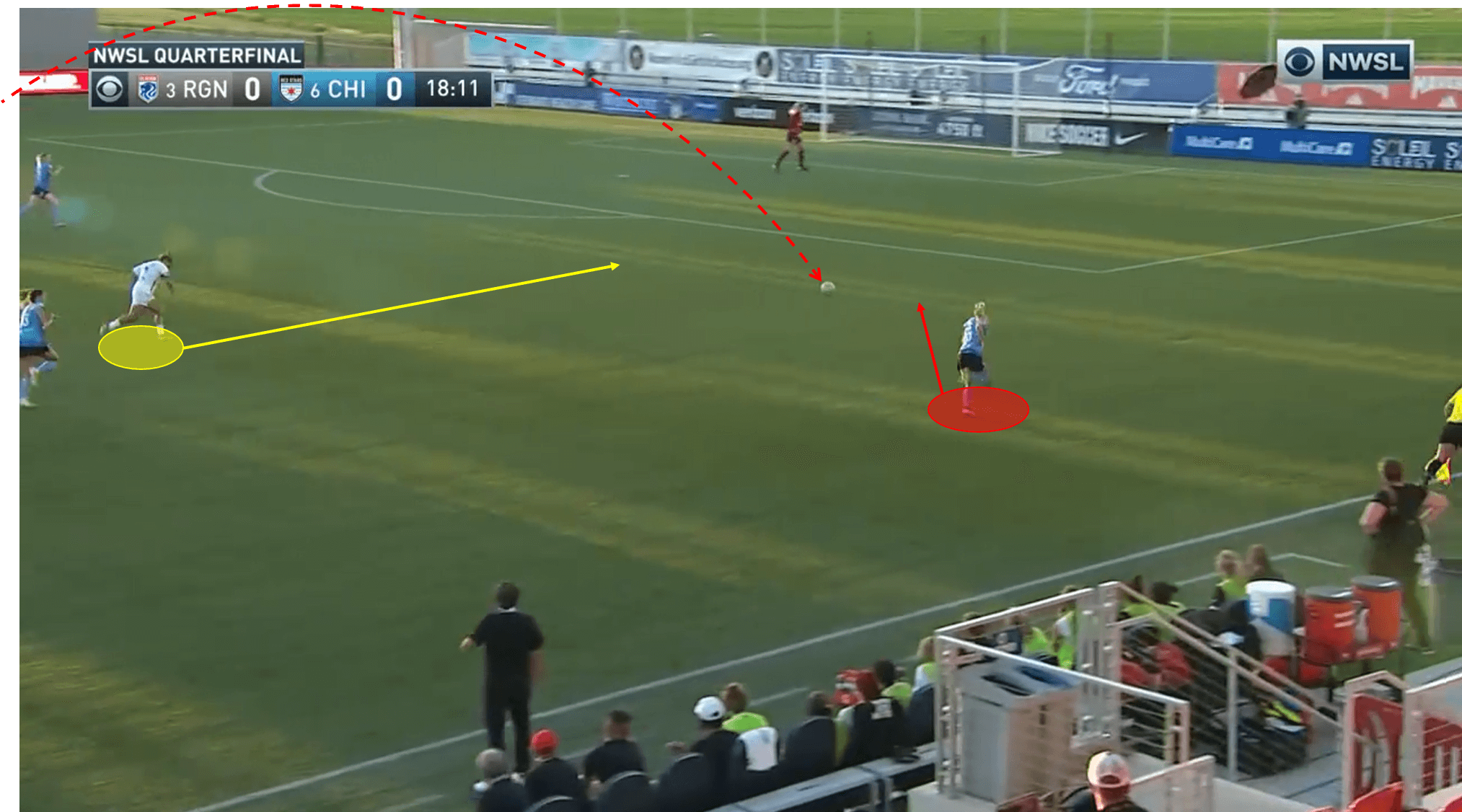 Ertz was able to use her vision, awareness and ability to manipulate the opponent to boost the Red Stars both in possession and out of possession. Her presence was quintessential to Chicago progressing to the NWSL Challenge Cup semifinals.

In the end, the match really could have gone either way. Both teams showed that they were just a few steps away from truly kicking into a higher gear while also showing that they need another week or two to get back into a groove. While Reign were eliminated in penalty kicks, Chicago move forward with the intent to knock Sky Blue aside to reach the final.