The NWSL Challenge Cup brought us a Cascadia rivalry game between heated opponents Portland Thorns and OL Reign. The contention between these teams is well documented and is known to give way to sold-out stadiums and exciting score lines. Analysis shows us that Thorns entered the match with an aggressive approach to their out of possession tactics, while Reign sought to patiently build and progress possession out of the back. This tactical analysis will look at exactly it all played out.

Portland enacted an aggressive approach when out of possession. When considering that Thorns had the highest ball recovery rate in the attacking third of the pitch in the 2019 campaign (19%) this does not come as a shock.

Thorns aimed to force play to the flanks where they could use the sideline as an additional wall of pressure and therefore aid in restricting attacking space for Reign. Portland were able to do this at times while having fewer players in the immediate area than Reign. This was done through the combination of high pressure on the ball carrier while using cover shadows to take away additional passing options. By effectively pressing with an underload, Portland were able to apply effective pressure without sacrificing positioning in other areas of the pitch.

Additionally, Thorns were able to quickly shift horizontally when Reign sought to switch the point of attack. The Thorns defensive shape would travel with the ball and arrive in Reign’s new platform of attack as the ball arrived.

We can see below a moment in which Thorns were able to press Reign out of their left flank and into a ball loss on the opposite flank. Portland right-wing, Simone Charley, directly pressures Reign centreback, Lauren Barnes. As Charley moves towards Barnes, she positions herself in the passing lane between Barnes and Reign left-back Stephanie Cox.

We can see that Reign have no reasonable forward or horizontal options in this moment. We also see that Thorns are negating any Reign progression with an underload of three players versus five. 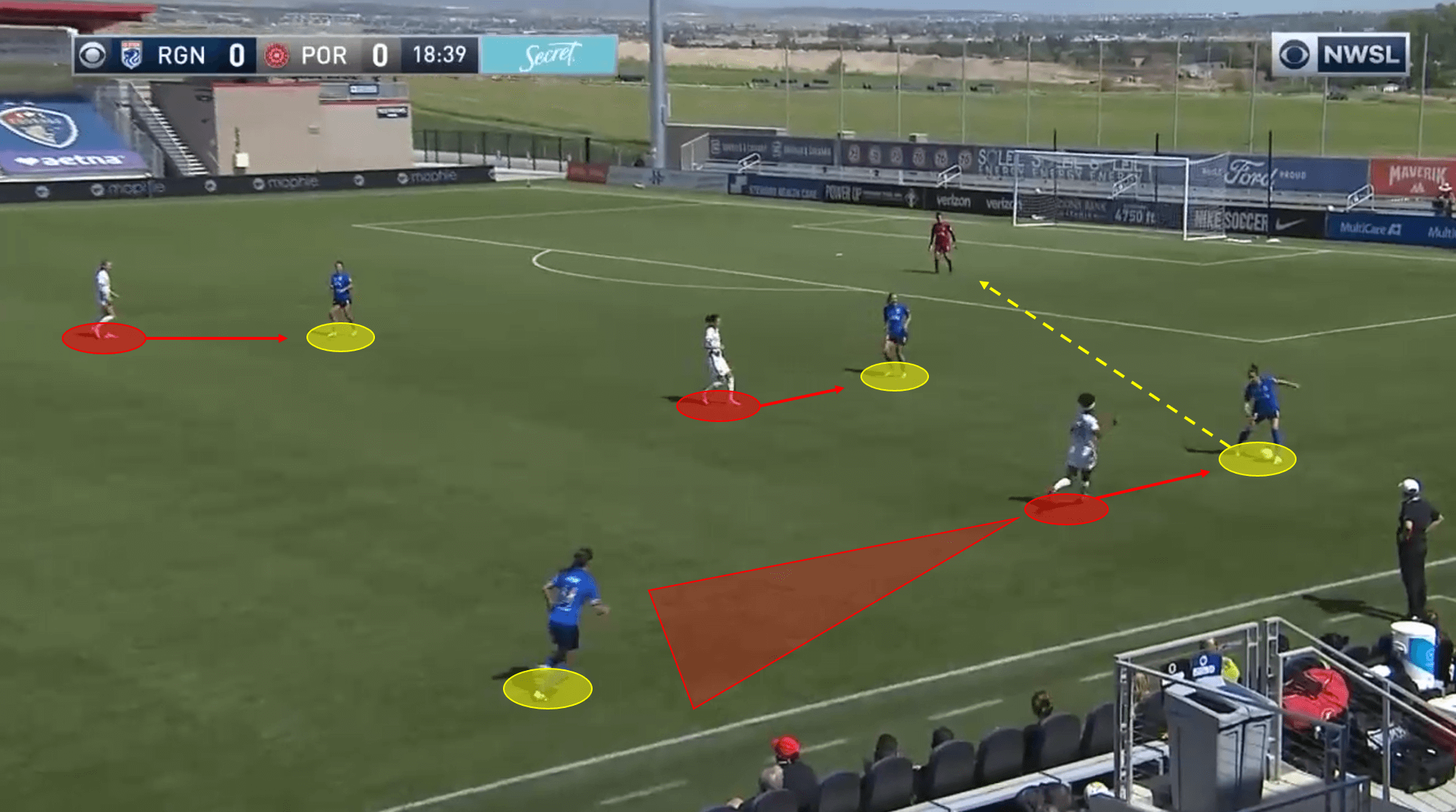 As the ball is released backwards to Reign goalkeeper Michelle Betos, the Thorns unit shifts horizontally to reposition themselves centrally. In the image below we see that Thorns left-wing Morgan Weaver has read the goalkeepers eyes and sees that the pass will soon be sent to the Reign right flank. Additionally, Charley has kept the intensity of her pressure and is bearing down on the goalkeeper, creating a time constraint for the passing player. 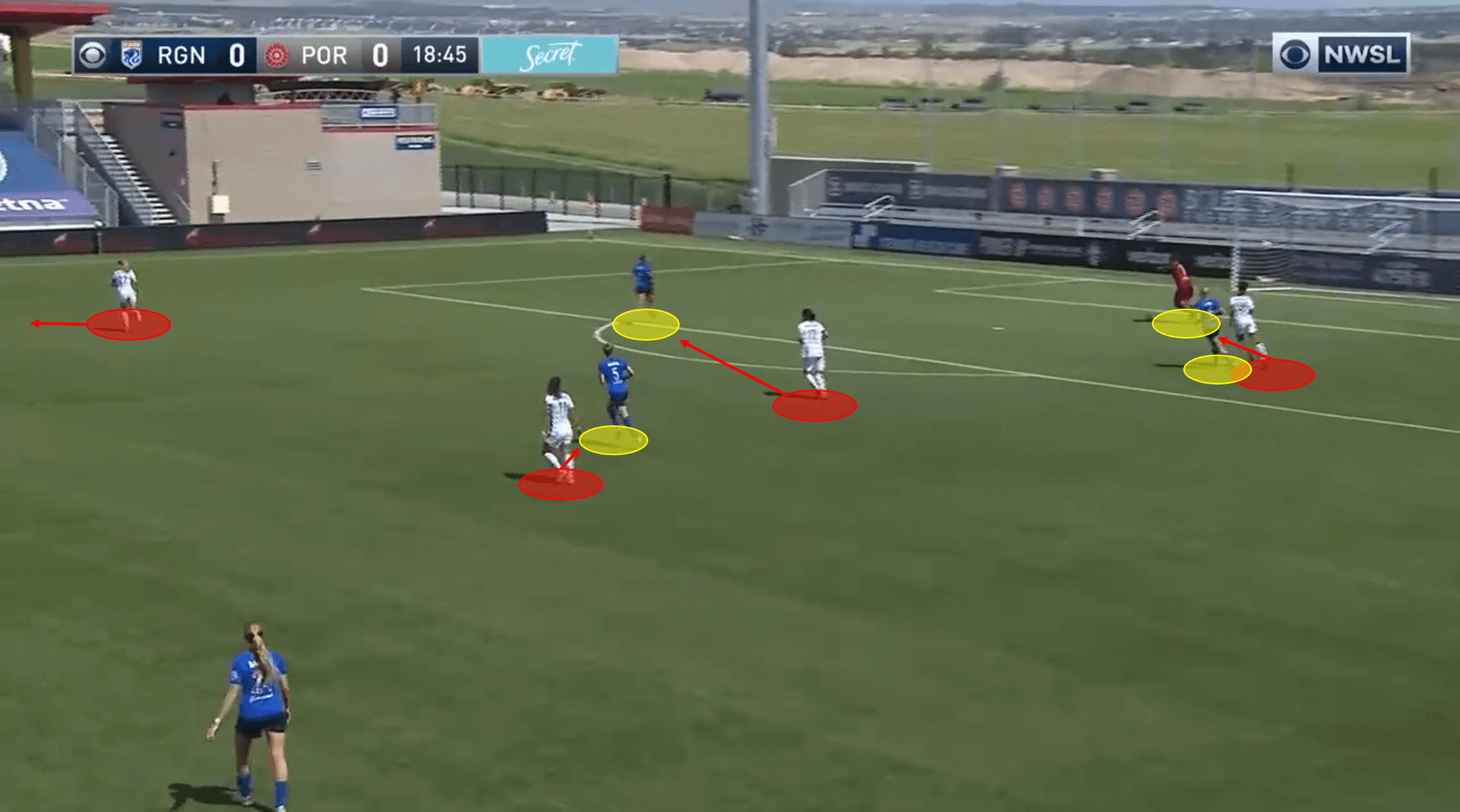 As the keeper releases the ball to the Reign right-back, Celia Jiménez, three Thorns players are ready to pounce. The quality of the pass is questionable partly due to the pressure from Charley. Jiménez is forced to take an additional second to collect and control the ball, which is all the time the Thorns players need. 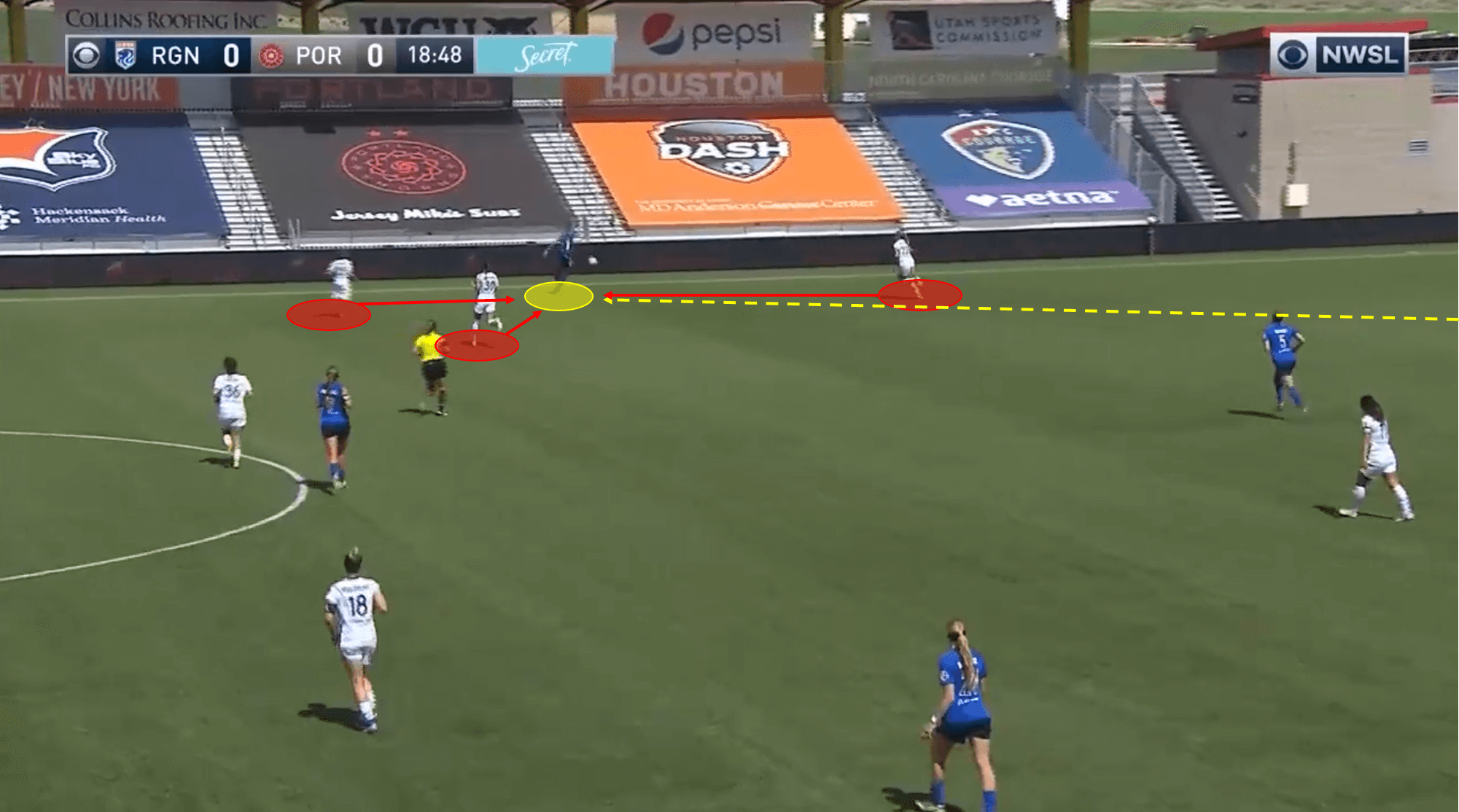 Portland are able to recover the ball and immediately begin their attacking phase. Thorns sought to apply this level of pressure as often as they could throughout the match.

Reign, from the outset, aimed to progress the ball through the thirds by building out of the back. Reign were able to create a structure in which players were fairly evenly staggered vertically and horizontally across the pitch to create maximum passing options per player.

The main problem that Reign found was that the tempo of their progression was less than that of the Portland press. This led to Reign midfield players to often receive the ball with their back to goal and a Portland player already bearing down on them. The inability to turn upfield, assess and engage in forward attacking options caused many Reign phases of progression in the first half to be extinguished in the middle third.

After some time, Reign were able to find a rhythm and use positional rotations to disorganize the Thorns’ player to player marking system. As Reign increased the use of rotations, they began to find easier paths to forward progression, but it was not enough. Reign did not register their first shot on goal until after the thirty-minute mark.

In the image below we can see that Reign midfielder, Dani Weatherholt, has received the ball with her back to Portland’s goal. She is met with immediate and intense pressure from behind and returns the ball back to fellow midfielder Allie Long. 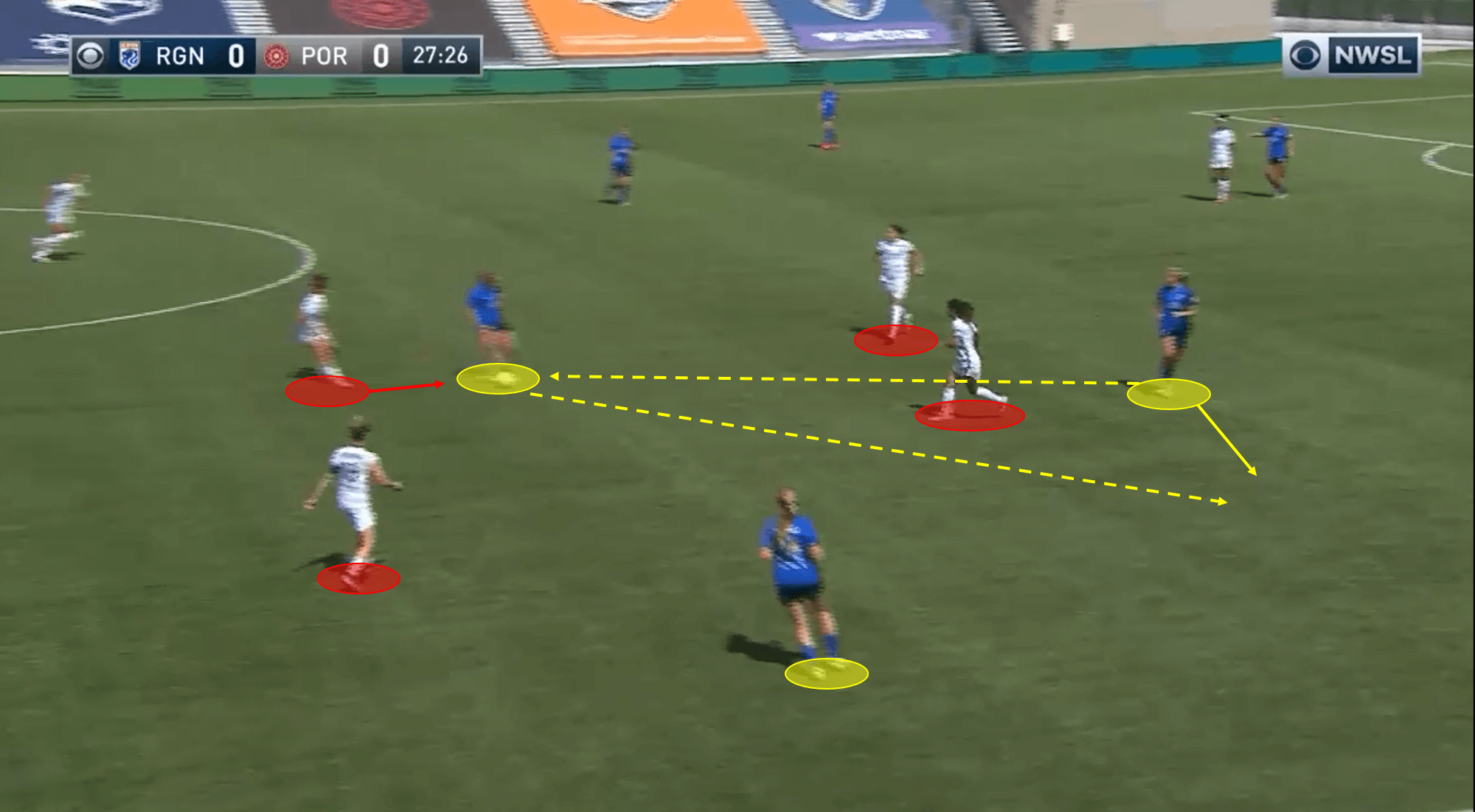 Play is recycled back to the Reign backline for a few seconds and then attempted progression into the middle third is initiated again. This time, Barnes penetrates forward with a dribble and releases the ball to a dropping Weatherholt.

We can see below, that in this moment a temporary triangle is created between Weatherholt, Barnes and Bethany Balcer. Each player is tightly marked by a Thorns player.

Instead of remaining stagnant, the three Reign players begin to create a circular rotation. Balcer moves towards the centre, while Weatherholt drops deeper and Barnes pushes higher up the sideline. 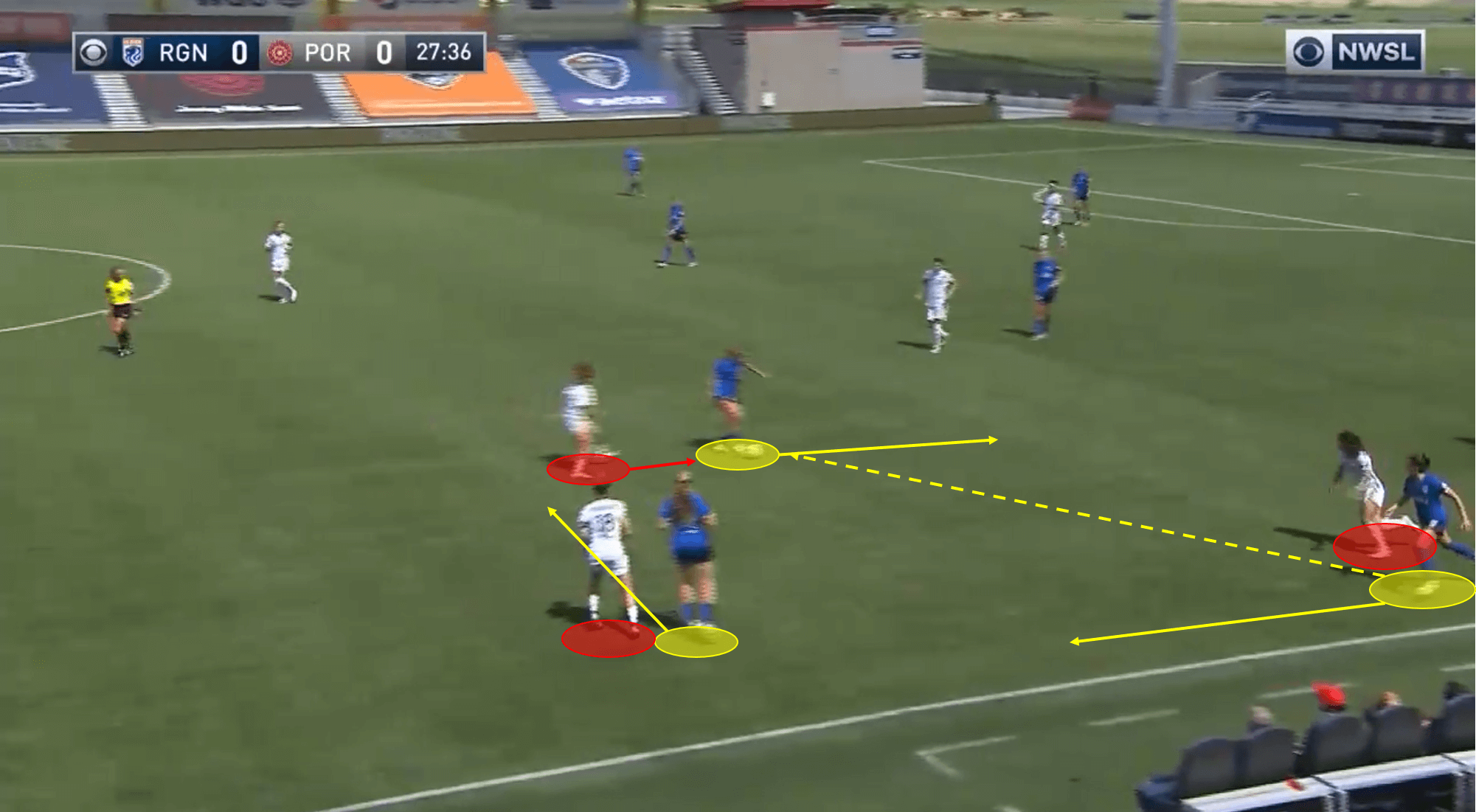 Weatherholt releases the ball back to Barnes while Balcer and Weatherholt engage in another rotation with each other. 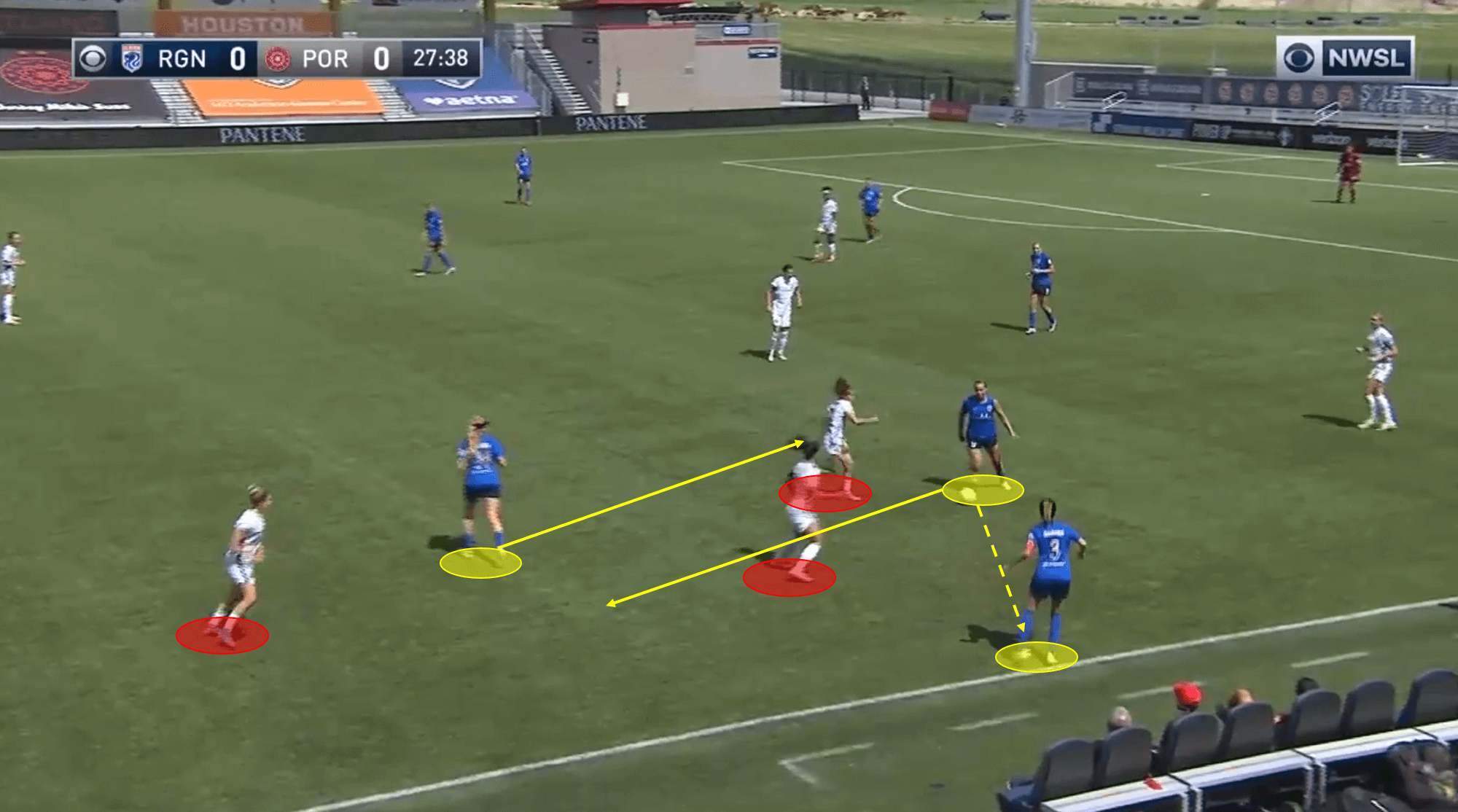 Looking at the image below versus the image in which Barnes first released the ball to Weatherholt (six seconds earlier), we can see that Reign still have a very similar triangular shape on the flank. The major difference is that now the Thorns players are disorganized and have lost the ability to quickly pressure direct opponents.

The ball is then played to a now open Balcer, who switches the point of attack to the far flank to create progression into the middle third. 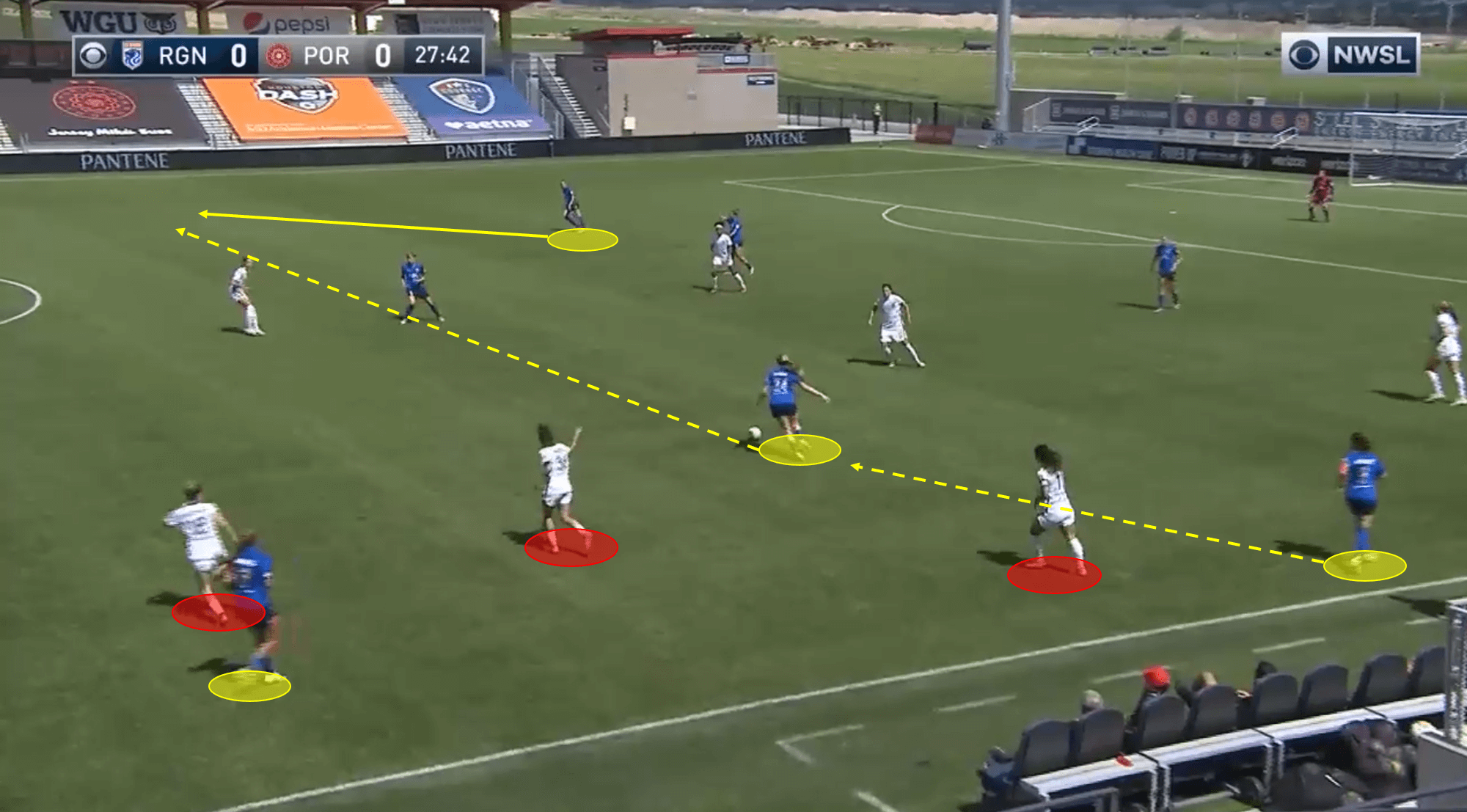 Although Reign were slowly able to find a rhythm and build from the defensive to middle thirds towards the end of the first half, they still struggled to find any meaningful possession in the attacking third.

Portland’s attacking game plan was similar to their defending plan in that they focused on the flanks. Thorns assistant coach Rich Gunney was quoted during the first water break as saying “…want to put pressure on Reign’s outside-back.” This was quite evident in their attacking patterns.

Once the now open space had been occupied by a Thorns player, the ball was released to that player and a platform to execute a cross was created. Thorns executed this initial tactic with ease throughout the match but had trouble making sure the crosses created were of quality.

This led Thorns to only have 6 successful crosses of the 27 created or a 22.2% success rate.

Below we see an example of this from the end of the first half. Portland right-wing Charley has possession in front of the defensive and midfield lines on the right flank. Directly to her right, Thorns right-back Christen Westphal has pushed up onto the same horizontal line.

Charley releases the ball to Westphal, who holds her position. Westphal’s, presence with the ball cues Reign left-back Cox to initiate pressure and drift away from the Reign back line of four. As Cox advances forward, Charley moves into the now vacant space behind. 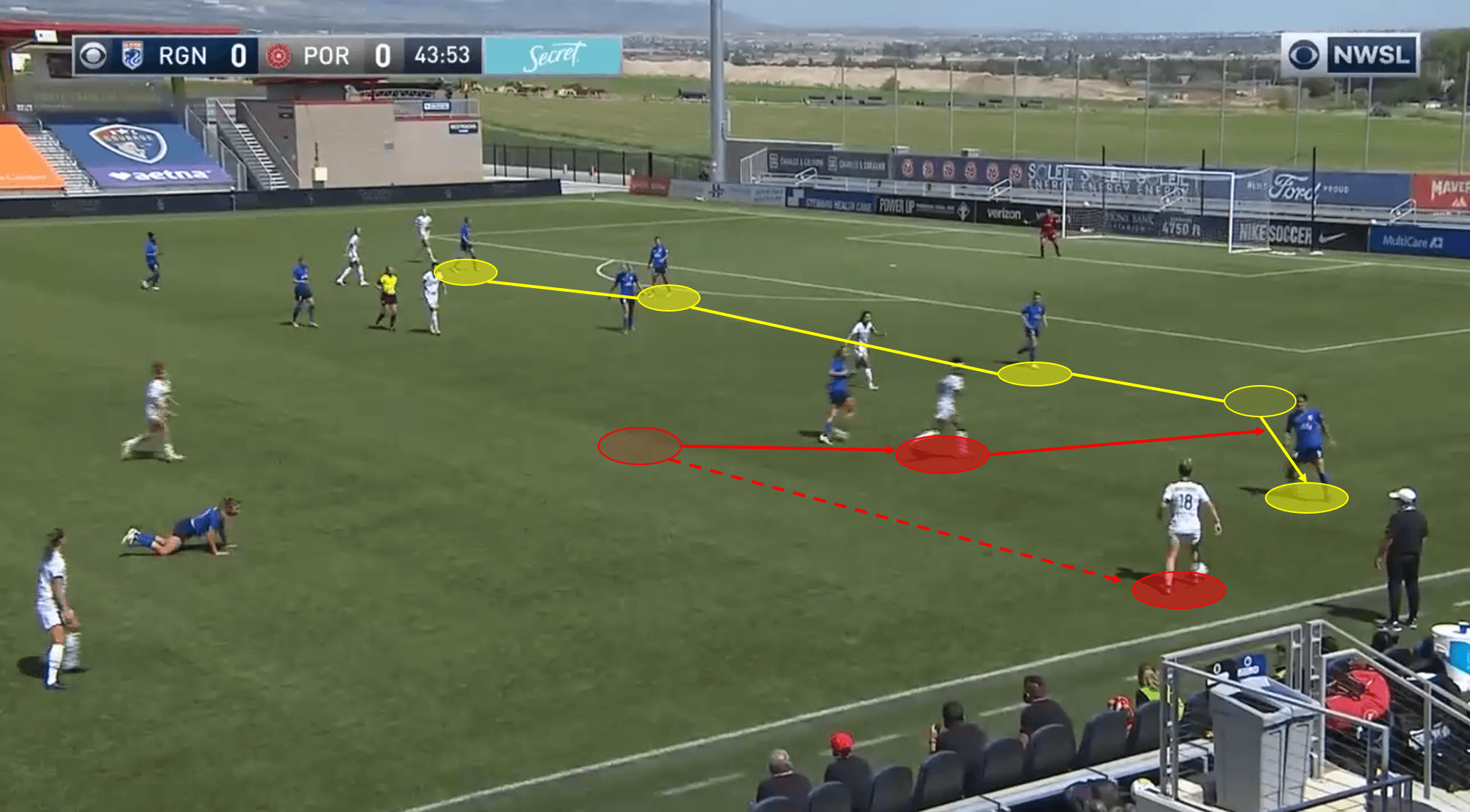 Once Charley has advanced to the offside line, Westphal releases the ball and Charley is able to penetrate forward into space unopposed. This deep penetration forces Reign centreback Barnes to vacate her central position and close down Charley.

Below we can see that Reign’s backline of four is now disjointed with a massive gap between centre-backs and with two of the defenders positioned on the flank. Charley takes the ball almost to the goal line and attempts a cross into the box (Cox is able to block it just in time). 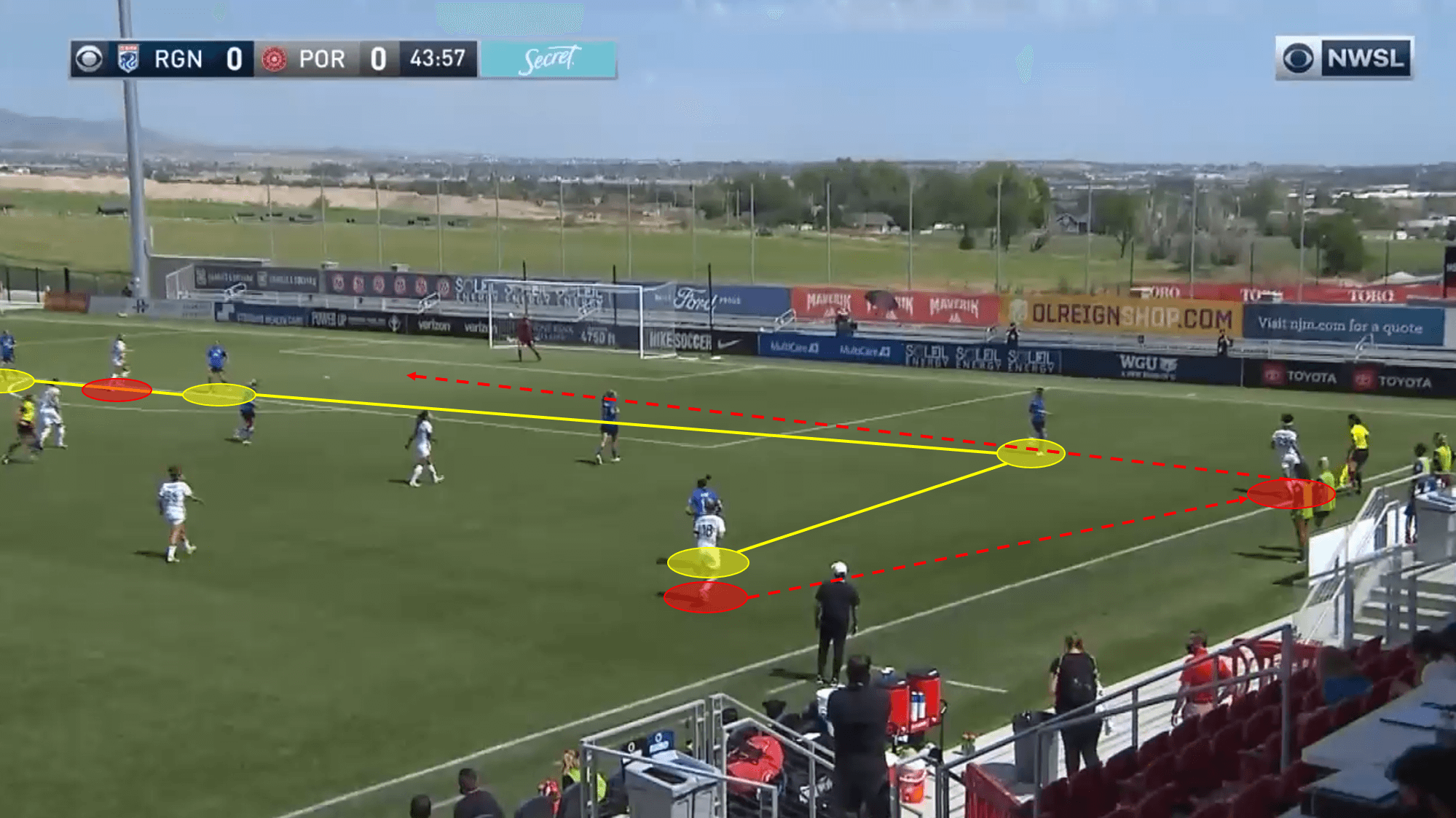 Again, in the seventy-fifth minute, we see Portland engage in the same attacking tactic. A player is positioned in front of the Reign defensive line and has received the ball. The Reign left-back pressures the Thorn attacker, opening space behind her. Tyler Lussi immediately enters the newly emptied space and receives the ball in the right flank of the attacking third. 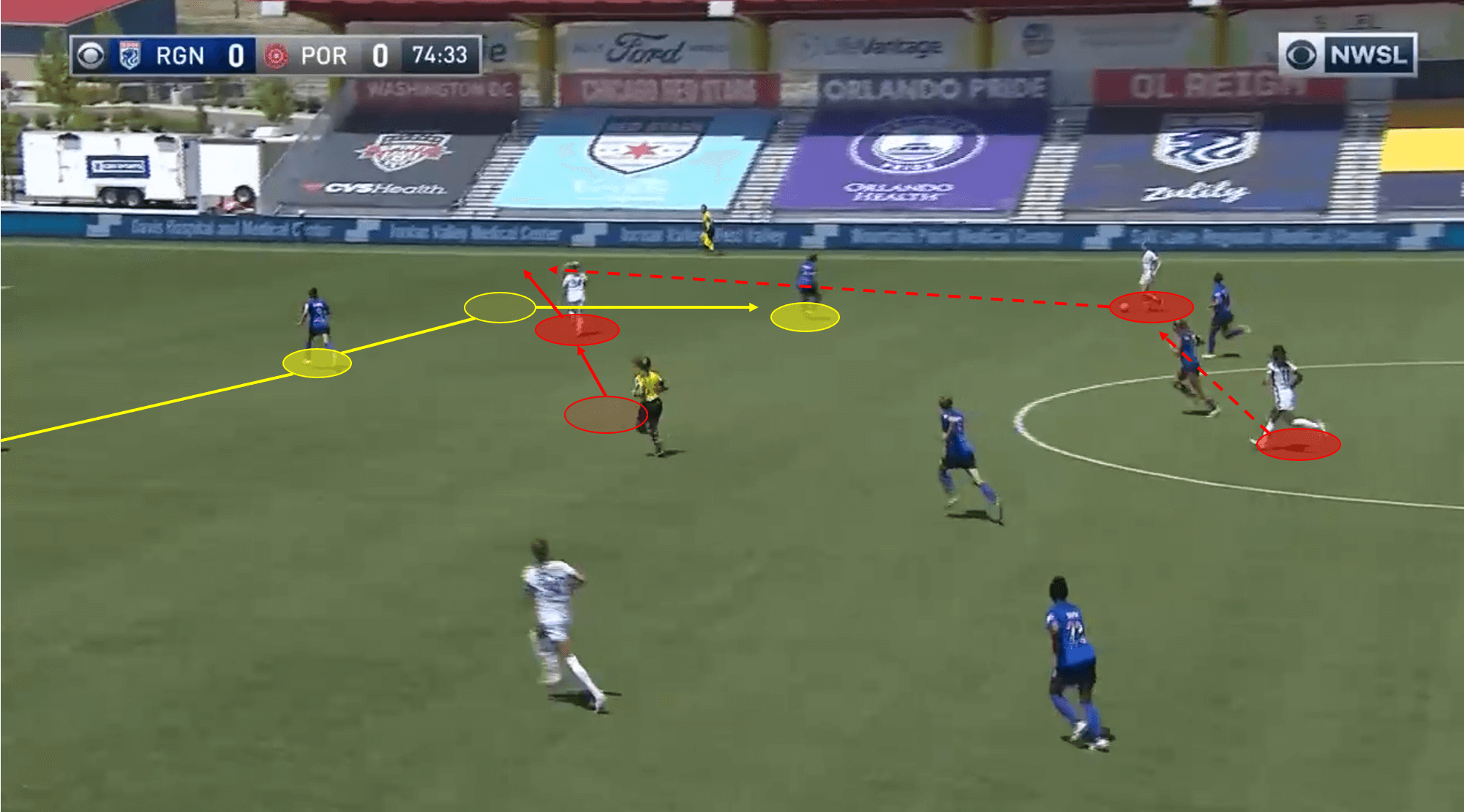 This time, Thorns are far more prepared in the box and have a 3v2 situation. Unfortunately, once again, the cross itself does not have the quality to reach the intended attackers in the box. 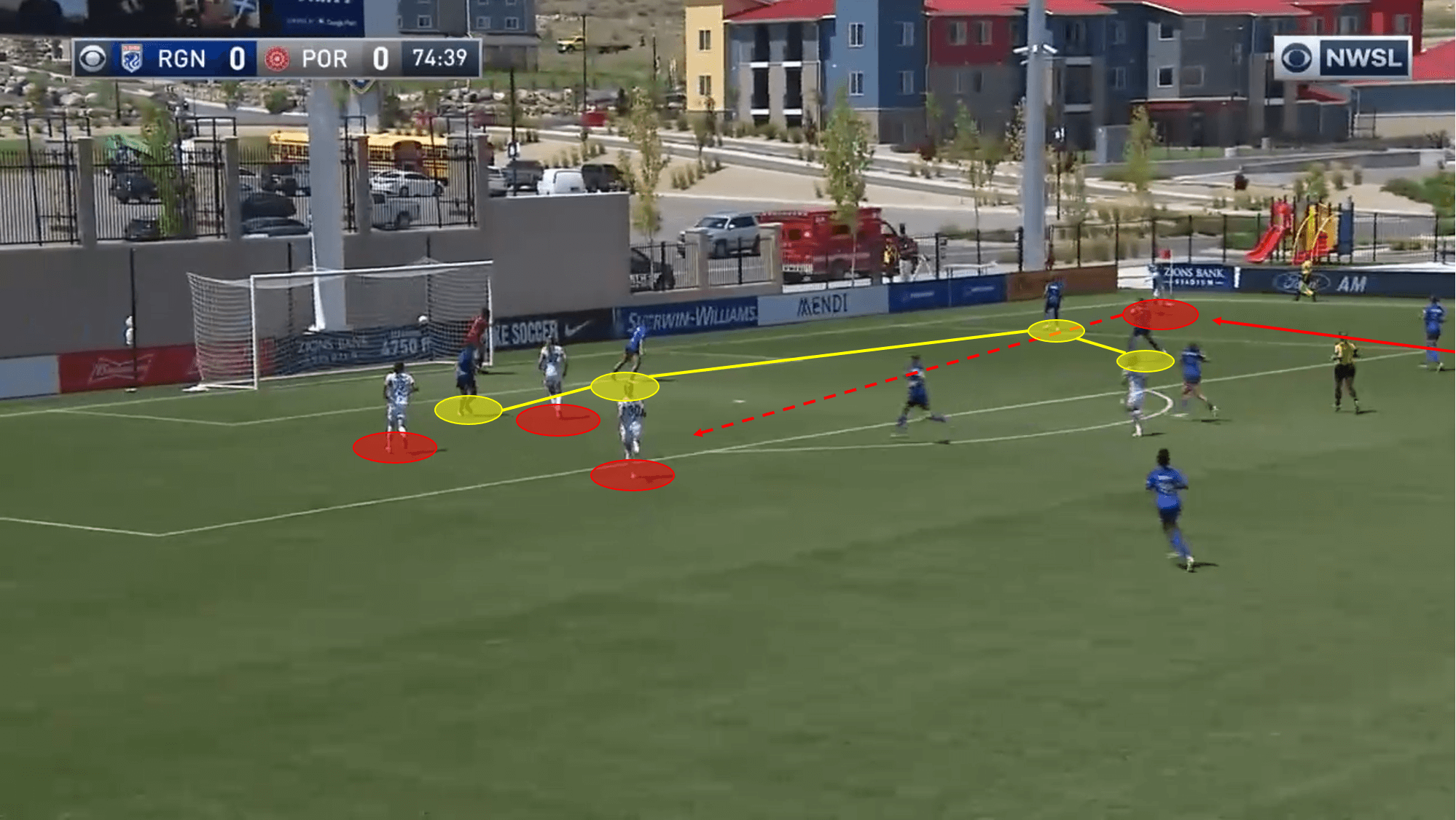 Unfortunately for Portland, none of their crosses or progressions into the attacking third resulted in a positive impact on the scoreboard. One has to wonder if they would have found more success if they had released their crosses earlier, as the attackers were arriving in the box.

OL Reign: more direct in the second half

Beginning in the second half there was a noticeable difference in Reign’s attacking tactics. Instead of solely focusing on building out of the back, they began to employ elements of direct play as well. This helped to create chances on goal in a few ways.

Firstly, playing over a press is much easier than playing through it.

Secondly, when playing against an opponent that engages in a one-dimensional attacking approach, it is easier to recognize patterns, predict future movements and prepare for them both mentally and physically. The more dynamic and varied a team’s attacking tactics are, the harder they are to defend. Players out of possession must be completely focused at all times and ready for any set of situational tactics.

Reign’s engaging in more direct play in the second half was not any sort of tactical upheaval, but it was quite effective. By altering their path of attack the Thorns unit was kept on the back foot and forced into a more reactionary position. Because of this, Reign were able to create far more chances on goal than in the first half.

We can see that a dangerous chance was created in the sixty-first minute through the use of direct play. Reign have launched the ball forward from a freekick into a 4v4 situation. In this moment the three nearest Thorns players are ball-watching. Conversely, the Reign attackers are moving to create a diamond shape in the central and halfspaces. 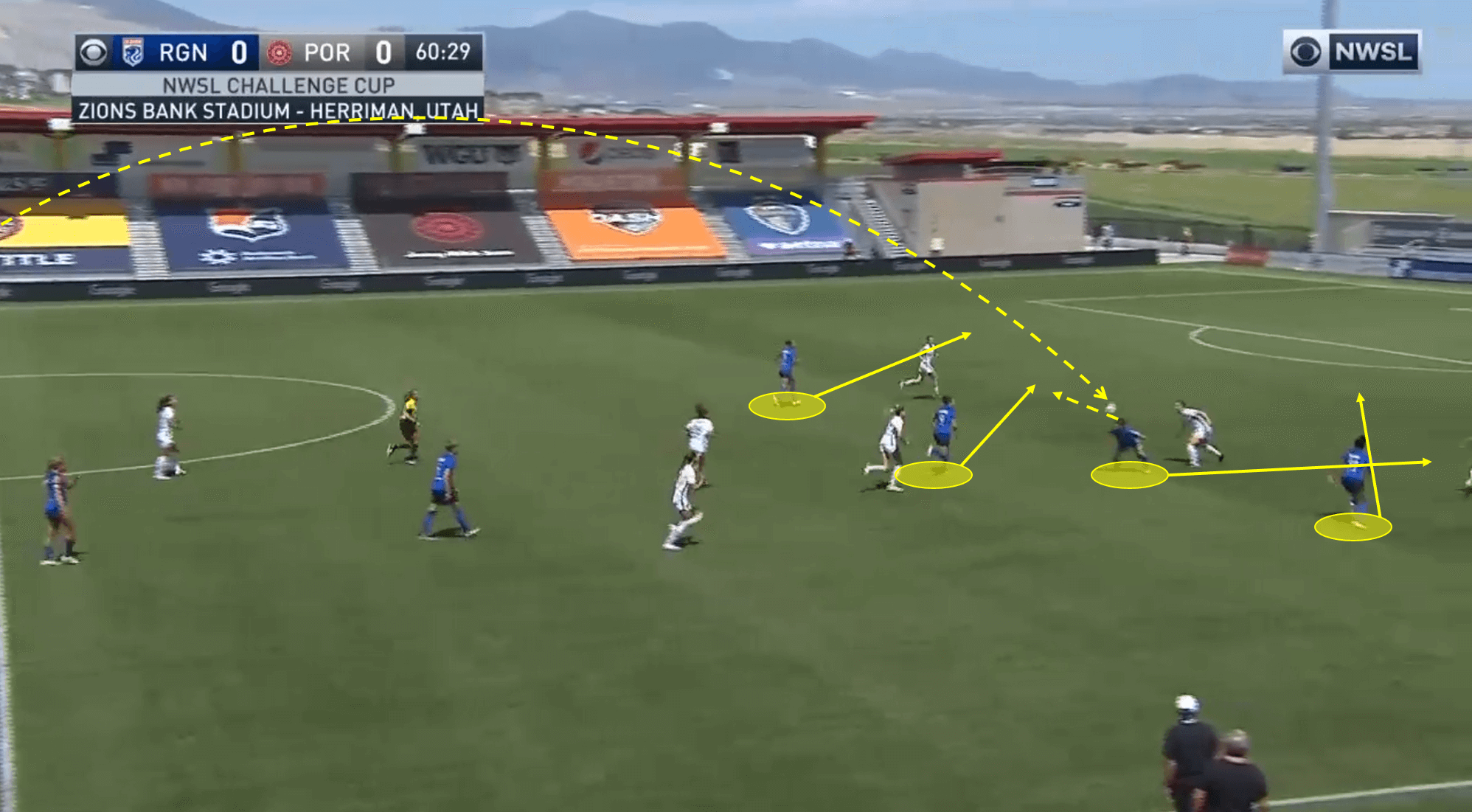 The ball is collected by a recent arrival from Nippon TV Beleza, Yuka Momiki and played to the feet of former Arsenal player Jodie Taylor. As Taylor takes a touch forward, Reign are positioned in centre and halfspaces to create three attacking options. We can also see that Thorns have very little defensive structure.

Taylor plays the ball forward to Taylor Smith who barely misses a shot with her left foot. 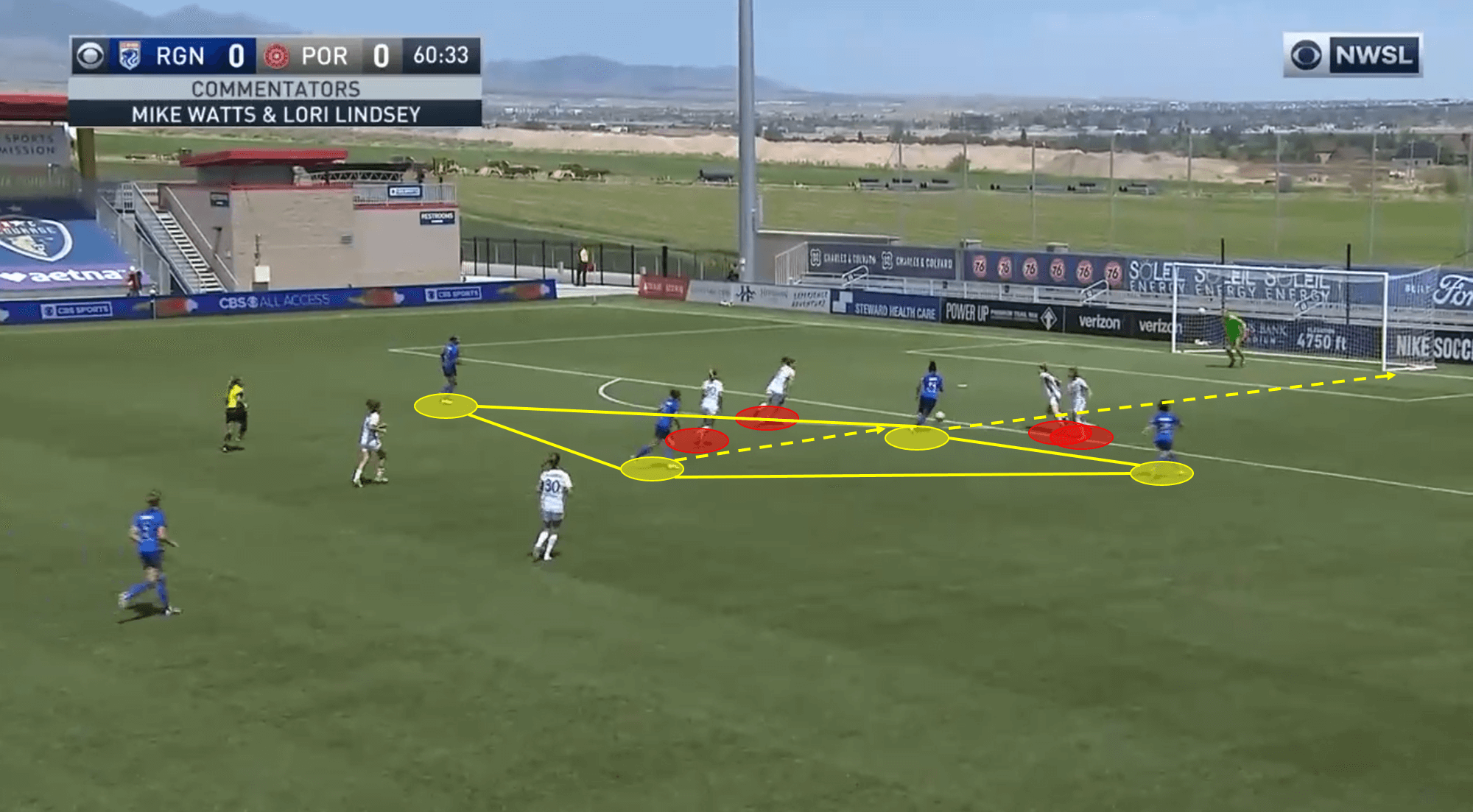 Reign were able to use this type of direct tactic intermittently with their building out of the back approach to keep Thorns guessing. Although this did help to create more chances on goal, like Thorns, Reign were unable to convert chances to goals.

In the end, a 0-0 draw leaves the Thorns with an undesirable matchup against the North Carolina Courage in the quarter-finals of the NWSL Challenge Cup. Reign will feel slightly better off with a matchup against the Chicago Red Stars. Both teams will be seen as underdogs with much to improve before the next match.