How did Reading survive a Norwich onslaught?

Norwich City hosted Reading in the EFL Championship looking to extend their lead at the top of the table and take one step closer to returning to the Premier League.

Reading have business of their own to attend to, as the Royals came into the fixture sitting precariously above the relegation zone. Manager José Manuel Gomes has overseen a slight improvement in results since taking the reins in December but faced a huge struggle coming up against Daniel Farke’s Canaries who have lost just one league game since the turn of the year.

This tactical analysis will examine how Norwich sought to assert their dominance as a Premier League team in waiting, and how Reading looked to contain the in-form team and get an unlikely result on their travels. 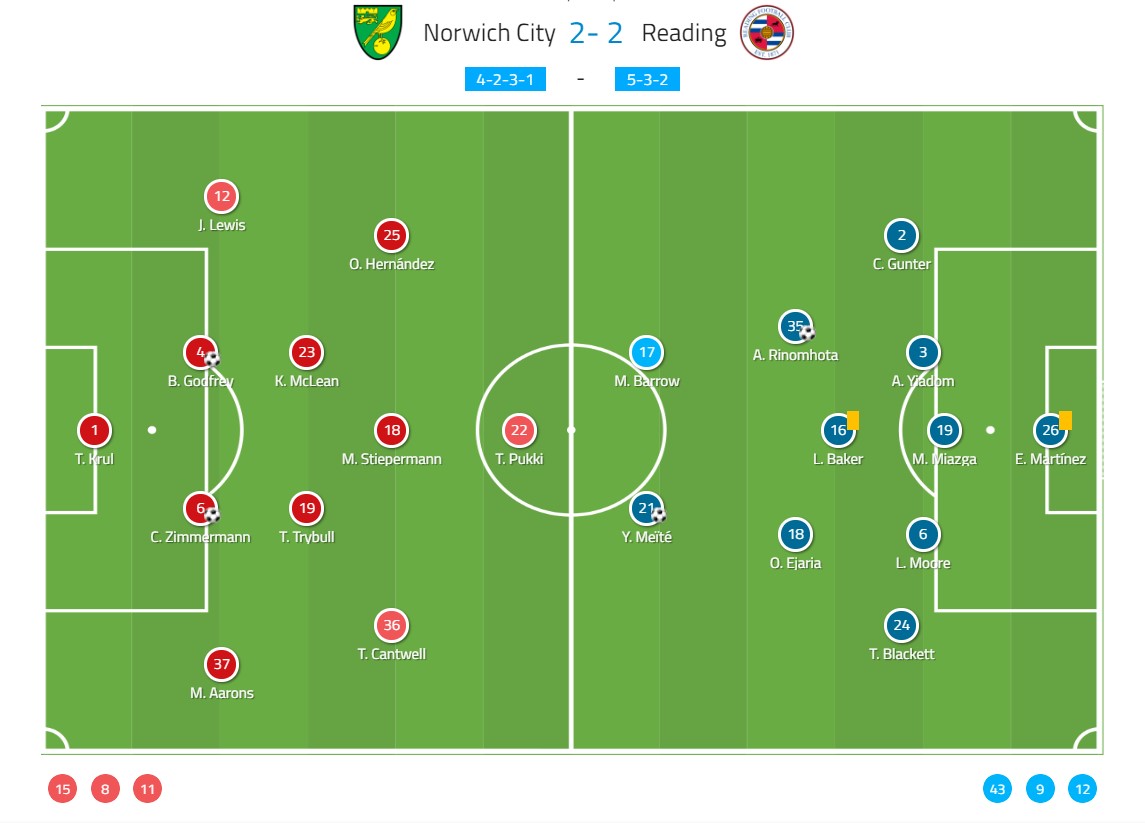 The Canaries lined up as expected in their 4-2-3-1 system, with Teemu Pukki leading the line backed up by the dynamic and fluid movement of Todd Cantrell, Marco Stiepermann, and Onel Hernández behind the Finn.

Reading, on the other hand, changed from their usual 4-2-3-1 to a 5-3-2, an act of containment that respected the quality Norwich possess.

The balance of the game

It was soon apparent that this was going to be a one-sided contest. As Reading dropped off into a deep 5-3-2 block, the Royals surrendered the ball as Norwich were tasked with a 90-minute attack vs defence practice.

Here you can see how Norwich’s 4-2-3-1 took up a 3-2-4-1 shape when in possession. With Reading’s two forwards, the back three in possession gave Norwich a clean 3v2 progression in the build up. Norwich’s positioning generated superiority behind both lines of Reading pressure, with both full-backs giving the Canaries width.

Reading were very passive in the manner in which they pressed. Mo Barrow and Yakou Méïté rarely exerted any pressure on the ball carrier and were content to screen the holding midfielder. Reading’s outside central midfielders Andy Rinomhota and Ovie Ejaria occasionally stepped up to engage Norwich’s left and right centre-backs who had split wide to prevent them dribbling the ball into midfield. In the case above, this created more space inside leaving a 2v2 centrally, with options to progress the ball in between the lines.

Other than this the Royals were content to remain in shape, as the midfield three performed the thankless task of shifting left and right to cover the centre of the pitch, forcing Norwich’s play down the flanks.

In the opening stages of the game, Norwich focused their attacking play down the right flank. This caused many issues for Reading, perhaps as the Royals are not used to playing the 5-3-2 system. Tyler Blackett at left-back was hesitant in his positioning, as he was unsure of who and when to press, and what spaces to cover. This was made harder by the dynamic and fluid movement of Norwich.

Early on in the game, this situation occurred when Blackett moves out to engage Norwich right-back, Max Aarons. The Royals defensive line, however, is disorganised, with a large gap left between Blackett and the left-sided centre-back. Whilst Norwich on this occasion do not capitalise, this was an early warning of what was in store for Reading.

Not long after, Blackett is caught in a half-and-half position, unsure of whether to press Aarons or cover the space in behind with a forward runner now capitalising on the space between Blackett and left centre-back Liam Moore. This drags Moore wide and into the full back-position; not a position you’d have imagined José Manuel Gomes would have wanted his centre-back occupying in a back five.

Similar movement continually destabilised Reading’s left side, allowing the Canaries to get in behind and down the inside channels where they could fire in low crosses or cut-backs. Notice also the poor positioning of the three Reading centre-backs, with them staggered in a manner that Pukki is able to position himself on the blindside of his marker yet remain on-side.

The targeting of Reading’s left flank continued as Norwich drew Reading infield by playing centrally to then create and exploit space down the wing. Below, Norwich once again are occupying positions behind the midfield line and overloading the centre, with Todd Cantwell drifting in from a wider position drawing Blackett narrow. This leaves Aarons free and unseen on the right flank.

With Reading drawn extremely narrow, Norwich still manage to find Stiepermann in between the lines as Reading defenders and midfielders collapse on the ball. There is an easy pass to the unmarked Aarons, however, who arrives to advance into a crossing situation.

This is a typical crossing situation that Norwich manufactured during the game, where they would break into the inside channels and look to fire low crosses or cut-backs to onrushing forwards. Inside the box the movement is varied to attack balls across the face of goal or cutbacks.

In this example two Norwich players attack the goal as Hernández checks his movement anticipating the cut-back. In this case, the low cross finds Pukki who fails to convert – a recurring theme on what was to become a frustrating evening for the league leaders.

Out of the blue

Football is an unfair game. As Norwich entirely dominated the ball, created chances and stopping Reading’s limited and unambitious counter-attacking, the Royals took a completely unexpected lead with their only shot of the first half.

A loose pass in midfield was seized upon by Mo Barrow who skipped past Zimmerman’s tackle and delivered the perfect low cross to Yakou Méïté who swept home a tricky chance.

Méïté is positioned outside the width of the goalposts, but yet still manages to convert the chance. It is perhaps easy to criticise, but Ben Godfrey doesn’t do a great deal wrong as the defender. He is marking Méïté touch-tight, not allowing him to receive and turn by rolling him, and possibly the only mistake he made was not doing more to throw himself in the way of the ball to block the shot.

Despite the unjust scoreline, Norwich continued to dominate and continued to create a steady stream of opportunities. It was not difficult to see how the Canaries find themselves top of the table, as they showed dynamic and flexible movement and support which created numerous difficulties for Reading to deal with.

This dimension to their play was evident as they would frequently overload areas of the pitch to combine in and break through the last line of defence.

Here they have overloaded the right side to create a 3v2 superiority, with players positioned between defenders creating confusion over who marks whom for the Royals. Zimmerman, who has advanced forward from centre-back with the ball, plays a diagonal pass into Pukki. This then triggers combination play and third-man movement in behind as the Finn receives the ball.

Norwich also provided an almost constant threat to the backline with runs in behind, which pushed the Royals defence back and created space in between the lines.

Once again Norwich are targeting Reading’s left-hand side. As Aarons receives the ball, this triggers the third-man runs in behind. In anticipating these runs the Reading backline must drop off to cover, which creates space for a pass inside to Cantwell.

A factor that allowed Norwich to have almost total control over proceedings was their reaction to losing the ball, which in truth didn’t tend to happen often.

It is not surprising to see Daniel Farke utilising an aggressive counter-press. Previously of Borussia Dortmund II, the German club is synonymous with this method which gained popularity during Jürgen Klopp’s spell as first team manager.

In this situation, Norwich have lost possession, but are positioned close to each other in possession so that they can immediately apply pressure to the ball. The reaction is instinctive as they immediately go to close the net around Gunter.

Notice here how as three Norwich players attack the ball carrier, Hernández drops in behind the pressure to provide cover and balance should the press be bypassed. This simple yet vital mechanism is essential for a fully functioning counter-press to work.

The second half of the game followed a very similar pattern to the first, with neither side modifying their shape. Norwich continued to pour forward and perhaps became a little too reliant on crossing the ball as they become desperate for an equaliser.

Reading, on the other hand, remained an almost passive participant in the fixture, offering virtually no threat on the break. They appeared happy to try and contain Norwich and grab an unlikely three points. Despite the containment tactics, Norwich were able to create chance after chance which should have given them a comfortable victory.

Finally the equaliser came, as Ben Godfrey stepped forward from centre-back to get a deserved goal.

Godfrey played a diagonal pass into the forward who lays it back as the centre-back followed his run unmarked to fire home. It was perhaps tiredness on Reading’s part that they allowed such a simple combination to bypass them late on in the game.

The action was far from over, as Norwich got what they thought was a deserved winner, with Zimmerman heading home from a corner kick. The celebrations were wild, and perhaps this led to a lack of collective concentration from the Carrow Road side as Reading stole a barely believable point deep into injury time.

Reading finally thought about attacking themselves, as the Royals’ second shot on target of the evening found the top corner.

Norwich show here how not to defend the box, particularly in the 97th minute of the game after scoring what they thought was a priceless winner. All the Norwich defenders have been drawn towards defending the six-yard box, and they do not have sufficient cover for the cut-back to the edge of the box. In this case, Rinomhota was on hand to give Reading a crucial point in their bid to avoid relegation to League 1.

It is barely believable that Reading came away with anything from this game, and despite the point gained this was far from an impressive performance from them. Their tactics to stifle Norwich didn’t work and only poor finishing saved their blushes. There was barely anything of note from them in an attacking sense, as they offered virtually nothing all game.

Norwich will feel aggrieved that this was not the comfortable win that their performance merited. In possession, they showed great flexibility and dynamism to unbalance the Reading defensive line, as well as an aggressive counter-press that snuffed out any potential counter-attacks. It will be interesting to see how Farke would adapt should Norwich remain top and enter next season’s Premier League. It is no surprise on this evidence why they have been so dominant in the Championship this season, however.

This game showed the extreme role that fortune plays in the outcome of football matches. Norwich will bemoan their luck in a game in which they had almost complete domination, whereas the Reading fans traveling home to Berkshire would have been claiming this is what makes football the sport that it is.