La Liga 2021/22: How Sevilla’s dominant first half display proved too much for Real Betis – tactical analysis

With Sevilla looking to keep alive their title challenge and close the gap on Real Madrid, Real Betis were looking to cement their position in 3rd place, maintain their push for securing Champions League qualification and close the gap between them and their city rivals to just three points.

It was a game that proposed two contrasting styles in approach and in current form, as Sevilla came into the match with the best defensive record in the league conceding only seventeen goals but only winning only one out of the last 5 matches in all competitions. While Real Betis were approaching the game with the 2nd best attack in the league scoring forty-seven goals, but they’ve won four out of the last five matches in all competitions.

This article features the tactical analysis of the game and explains the key tactics behind Sevilla’s dominant 1st half display and why it proved too much for Real Betis to recover from as Sevilla claimed all three points. 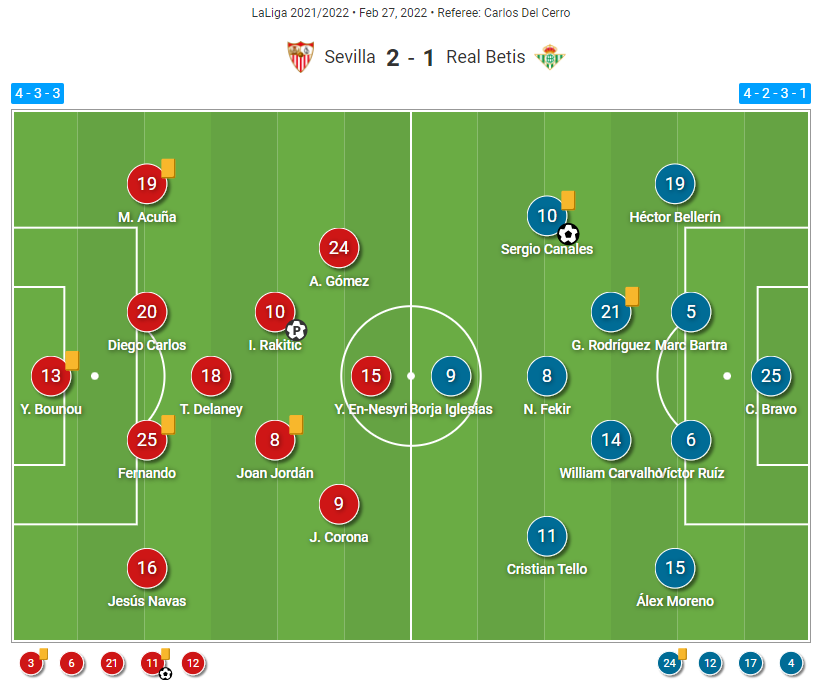 Sevilla opted for Julen Lopetegui’s preferred 4-3-3 formation, and although Lopetegui has shown flexibility with different formations this season by using a 4-2-3-1 and a 3-4-3, he has used the 4-3-3 formation 43% of the time. Real Betis and Manual Pellegrini set up with their accustomed 4-2-3-1 formation with the curiosity being what part of the advanced three midfielders would Sergio Canales play as Manual Pellegrini has at times rotated what area of the pitch Canales plays.

There were notable absentees from Sevilla’s selected squad as Erik Lamela and Suso remained out of contention with ongoing issues. Karim Rekik and Anthony Martial who missed the Europa League previously were not risked and Lucas Ocampos and Jules Koundé were both still suspended.

This left Sevilla with a weakened backline as Fernando had to drop in from his usual midfield position to play alongside Diego Carlos who was Sevilla’s only fit centre back.

Build Up vs Counter Press

The game started with both teams looking to get the ball forward quickly and then setting up to counter-press and win the ball back in the attacking third of the pitch.

Sevilla’s counter-press was more effective than the Real Betis counter-press. They were able to cut off the passing options centrally and stop any progression building down the flanks by keeping the full-backs pinned back. 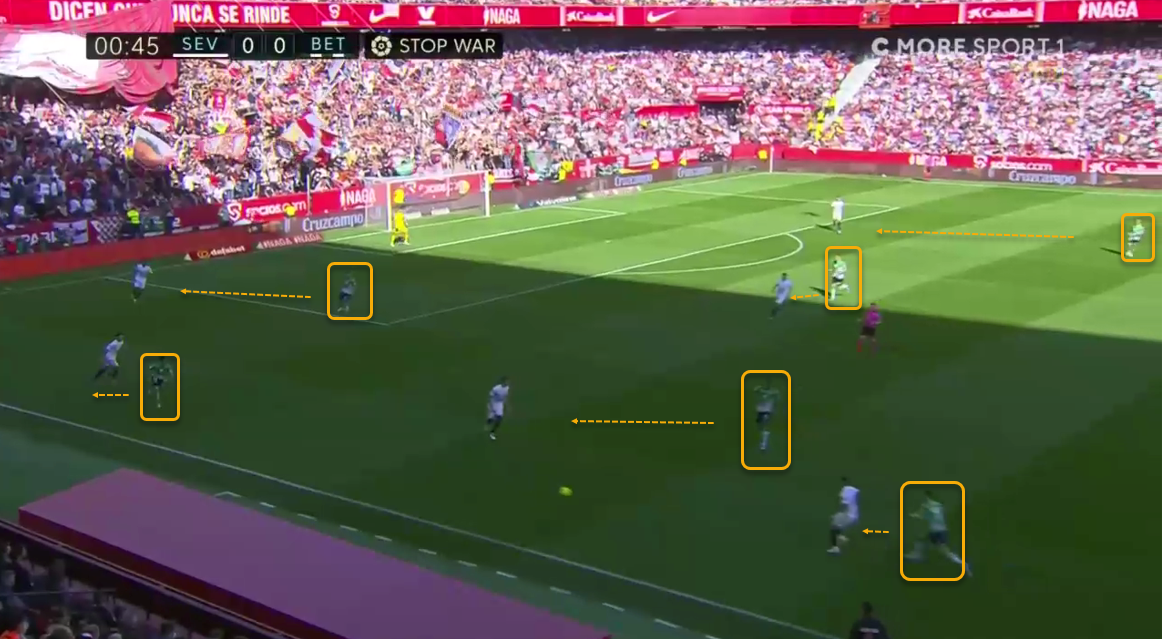 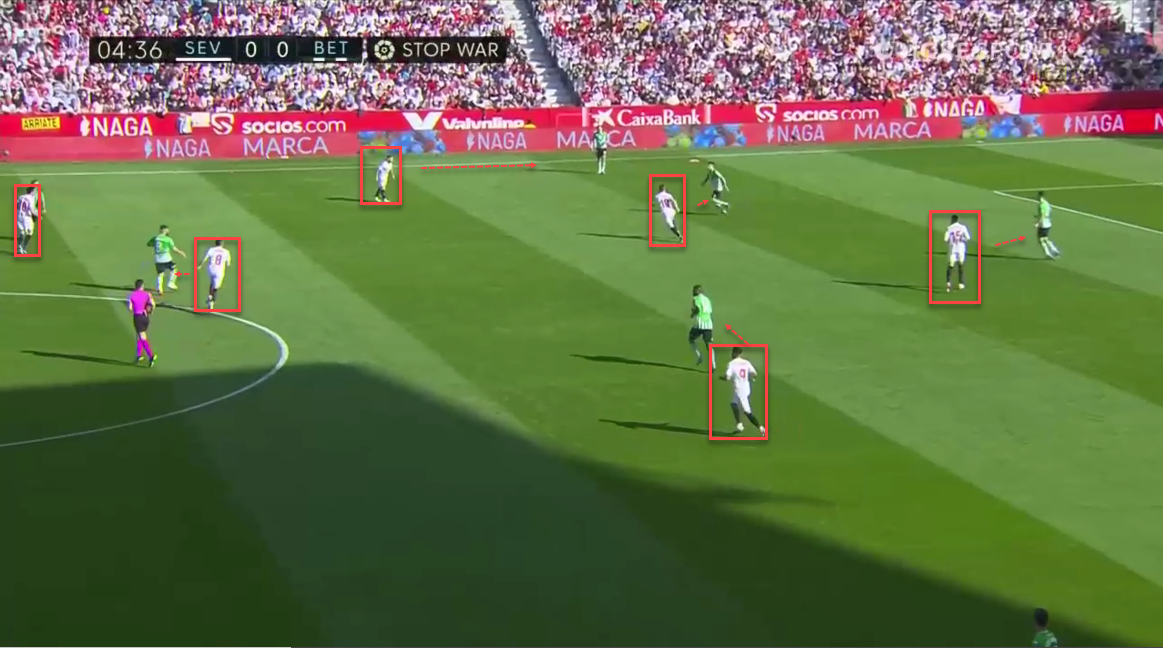 This inevitably forced Real Betis into long balls leading to Borja Iglesias becoming isolated and the attacking midfielders having to cover more ground to enable them to press high, which could not be sustained. 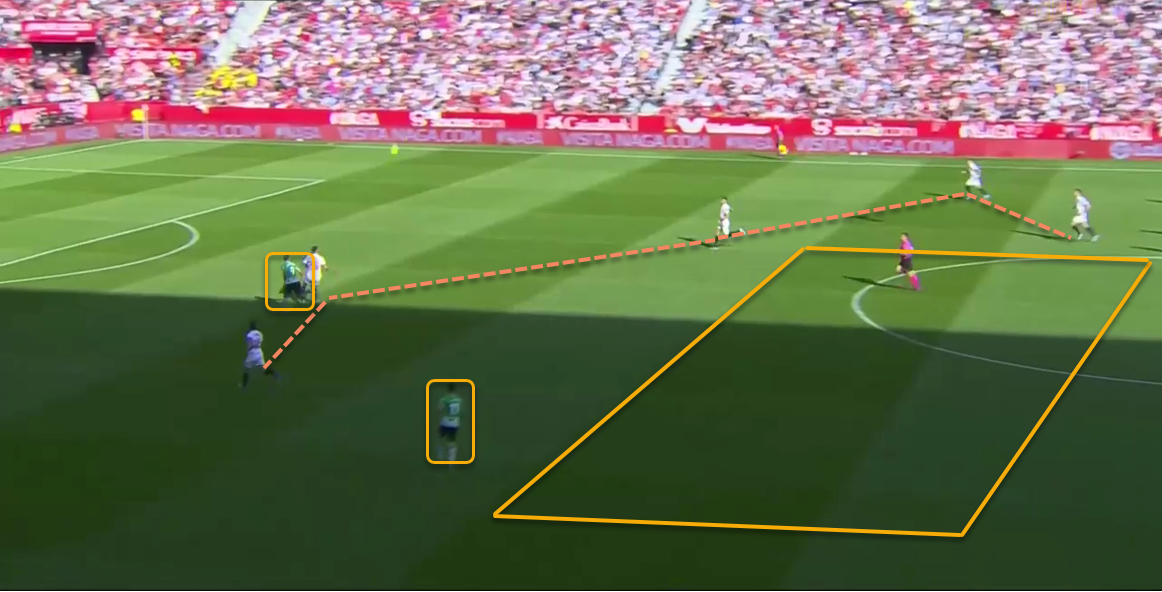 Sevilla took full advantage of this with their build-up play, as they looked to build up quickly and directly through each third of pitch, always offering a spare man as either one of the centre midfielders or wingers would drop into space to provide an extra passing option. This is a common tactical ploy by Sevilla under Julen Lopetegui. It created plenty of space in the wide areas to attack into. 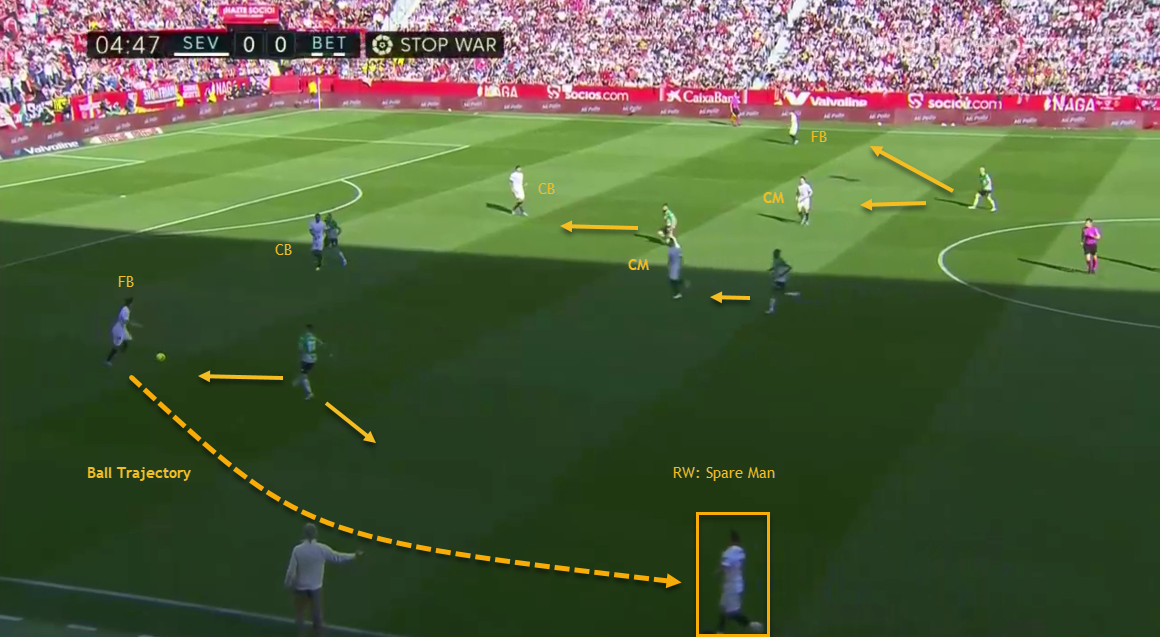 Whenever Sevilla won the ball back or where able to successfully play through Real Betis’s press, they looked to attack by getting the ball into the wide areas. They enjoyed attacking the space behind the fullbacks and offered a lot of movement in the half-spaces. The two fullbacks Jesus Navas and Marcos Acuna played a pivotal part in these attacks. Their ability to vary the attacking runs on either the outside or the inside helped create overloads in the wide areas. Real Betis could not cope with Sevilla’s overloads out wide, as they struggled with the positional fluidity the Los Rojiblancos provided.

It was often one out of the two midfielders playing in the double pivot that would assist in trying to match Sevilla numerically out wide which would cause a knock-on effect centrally and on the opposite flank. 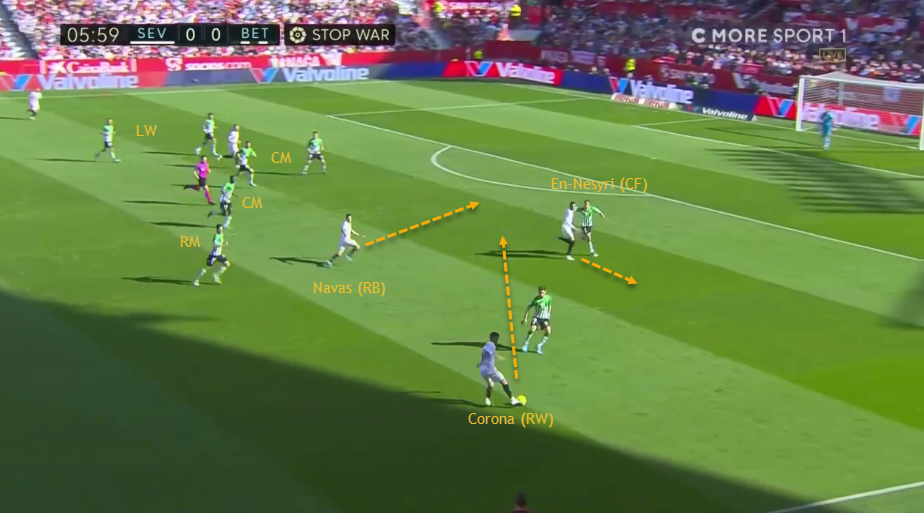 The attack starts down Sevilla’s left-hand side as they won the ball back quickly from a Real Betis throw-in. Several of the Real Betis players were positioned on that side of the pitch looking to recover the ball, so Sevilla have then looked to switch the play over to the right-hand side.

Shifting opposition teams from one side to another in this manner is what creates space for teams to attack as it can cause the opposition to become disjointed as they attempt to stay in shape and win back the ball.

You can see how the Real Betis midfielders are still in the process and following the ball to the right-hand side because they have been drawn to the ball when it was held on the opposite side. As Real Betis’s left-back Alex Moreno looks to close down Jesus Corona, Jesus Navas makes a forward run inside beyond Real Betis’s midfield at the same time that Youssef En-Nesyri makes a run towards the right-hand channel behind Alex Moreno. This gives Vitor Ruiz the Real Betis centre back two choices, with neither choice being a good one as Jesus Corona has the option to play the ball to whichever run Vitor Ruiz decides not to follow.

Out of Possession Shape

Sevilla’s ability to control the space when they weren’t in possession was a key aspect in shutting down Real Betis when they attacked. It was clear from the start that Julen Lopetegui had instructed his team to try and dominate the ball, attack the wide areas, and constantly make use of the space with quick vertical football. However as Manual Pellegrini also likes his team to control possession and to attack, it was always going to be the team that had the better defensive structure that would control the match.

Sevilla performed a lot better out of possession than Real Betis did, and their ability to vary between a low, medium and a high block depending on the ball position was fundamental to the victory. When Real Betis held possession in the Sevilla’s half, Sevilla would drop into a 4-4-2 shape with Ivan Rakitic moving forward to join Youssef En-Nesyri in the first line of defence.

As you can see in this example here. You can see the Sevilla sitting in a narrow 4-4-2 mid-block, looking to cut off the central area of the pitch and forcing Real Betis out wide. 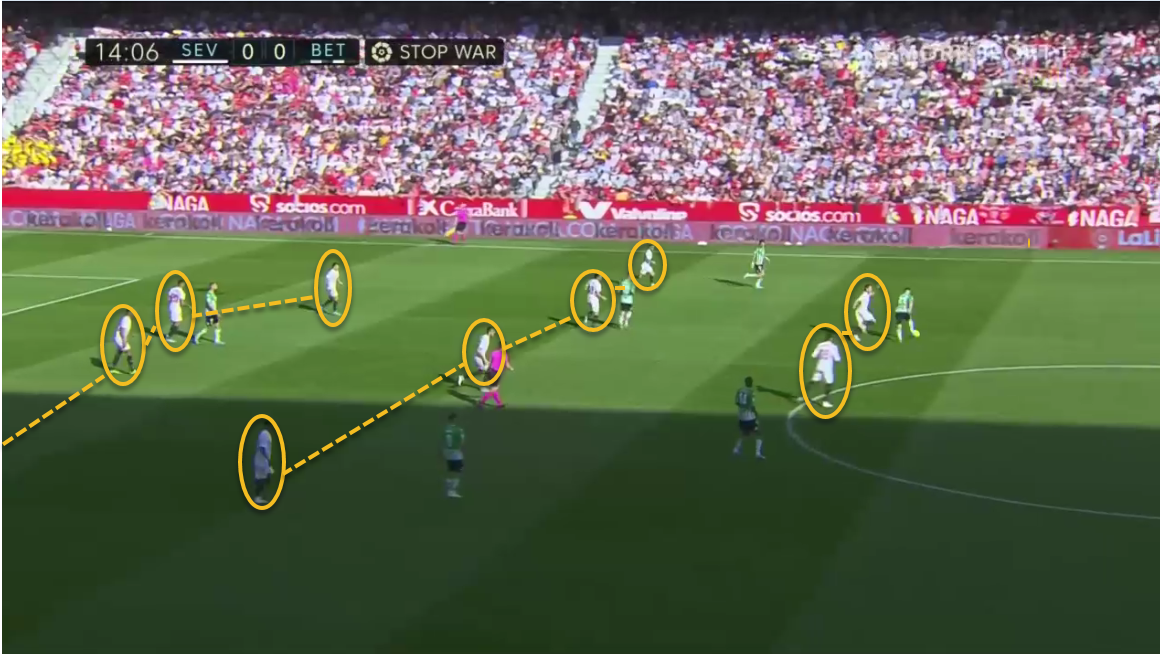 A lack of ideas from Real Betis

Real Betis were very disjointed with their attacking play, and they lacked any clear ideas on how to attack Sevilla in the 1st half. They were very passive in possession and although Sevilla made it difficult for them, they failed to play with any cohesiveness when going forward.

Manual Pellegrini made an error in judgement in playing Sergio Canales on the right-hand side as the Spanish midfielder was often caught drifting inside looking for the ball.

If Sevilla pressed high, then Real Betis were forced into long balls. When Sevilla sat into their 4-4-2 medium block then Betis were forced to try and play around Sevilla to the full-backs and ultimately sideways.

The problem was the lack of movement in the attacking third of the pitch. Sergio Canales, Nabil Fakir and Cristian Tello all wanted the ball to their feet, with none of them looking to run beyond Borja Iglesias at any stage to try and split Sevilla’s defensive structure. 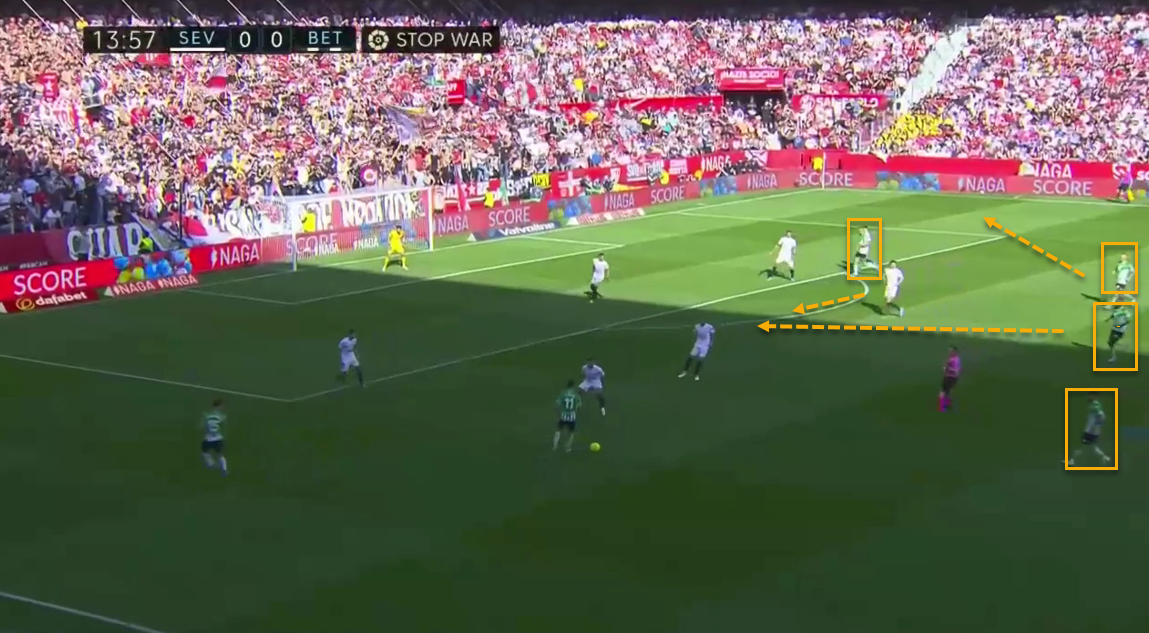 Real Betis have four players including Cristian Tello who is in possession of the ball looking to attack Sevilla’s penalty area, but no player is looking to break beyond Sevilla’s midfield three. This makes it very easy for Sevilla to defend this passage of play as they won’t have to break their shape at any point. Tello should play the ball to Nabil Fekir here, and if Rodriguez was to break forward into the space shown then Thomas Delaney would have to cover the run, and this would then open the right-hand side for Sergio Canales 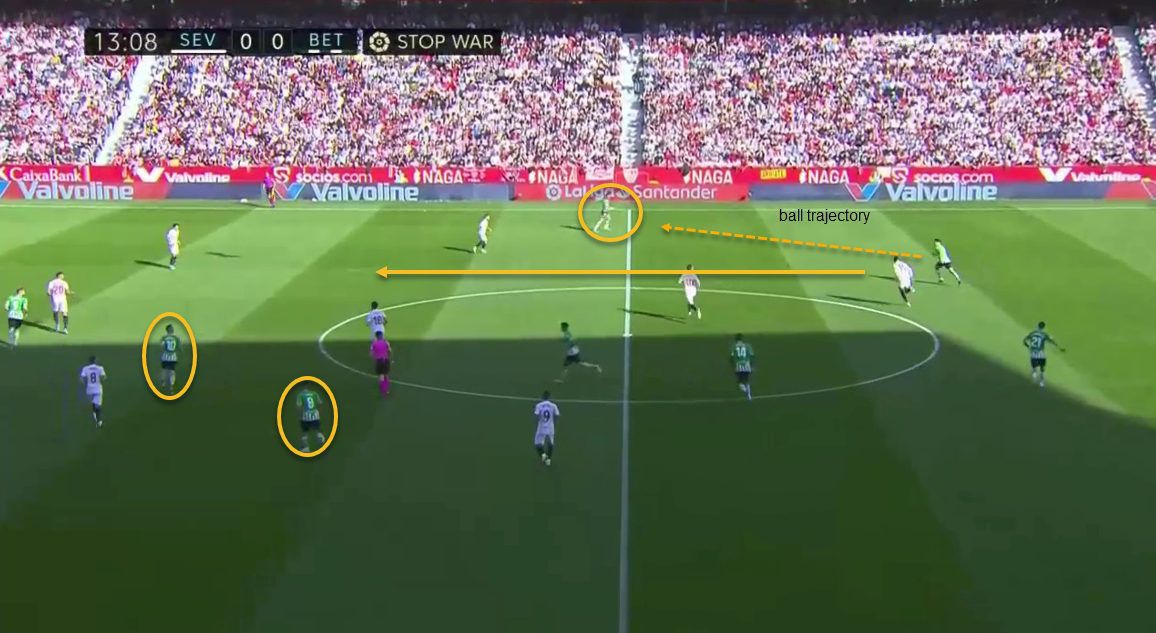 Marc Bartra is progressing with the ball but the only available passing option is Hector Bellerin who is already running backwards into position. There is a clear forward pass directly through half-space, but Sergio Canales and Nabil Fekir are both too central to pick up the pass.

Manual Pellegrini did make changes at halftime bringing on Joaquin and Aitor Ruibal. He didn’t defer away from his 4-2-3-1 shape but he did move Sergio Canales inside to play as part of the double pivot. This helped Real Betis gain more control when building up and provided the team with better progression into the three attacking midfielders. They kept possession a lot better and they instructed the full-backs to play a lot higher and wider as they look to overload Sevilla’s penalty area, sometimes attacking in a 3-1-6 shape. 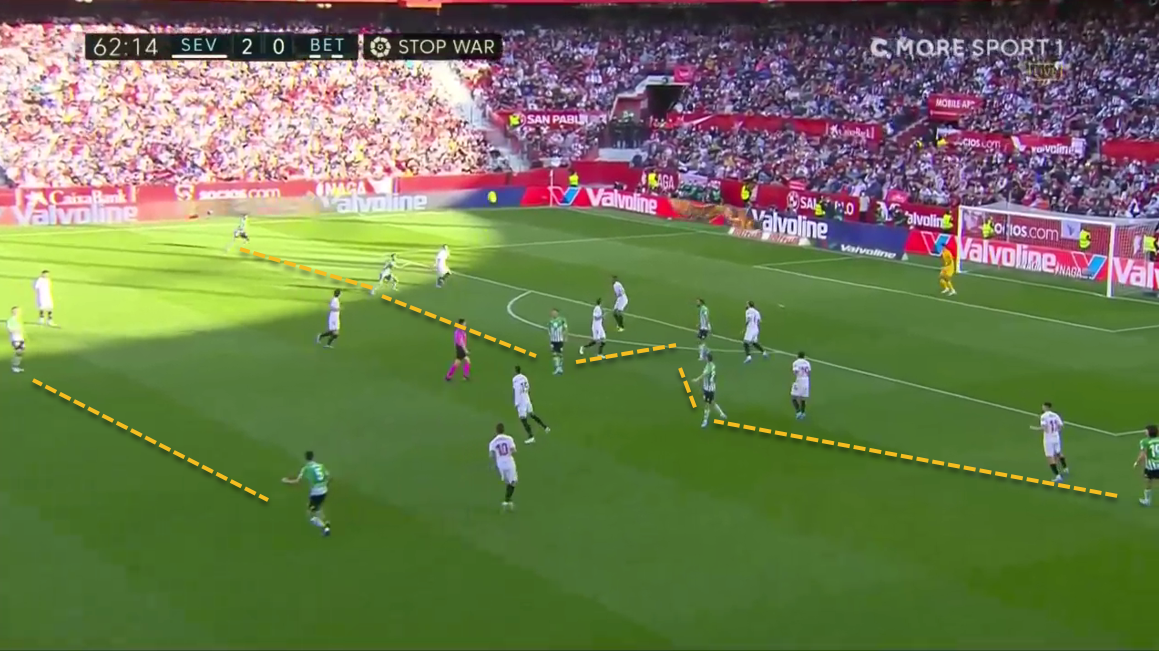 Marc Bartra has carried the ball out of defence and looked to switch the play as a way of stretching Sevilla’s defence who are sitting in a narrow bank of four. The full-backs playing higher up the pitch enable Real Betis to get into better areas from crossing.

Sergio Canales did half the deficit scoring a free kick in the 94th minute but it was merely a consolation goal as Real Betis didn’t do enough in the second half to get back in the game.

Julen Lopetegui will be delighted with the performance. This analysis shows how tactically they were able perform two different aspects of play to ensure victory.  In the first half, they played quickly and vertically, looking to dominate the ball and attack the wide spaces in behind the Real Betis defence. In the second half when Real Betis applied more pressure and a more purposeful attack they remained disciplined, switching between low, medium, and high blocks situationally and nullifying them.