In the January transfer window, Burnley FC lost their main goal-scoring threat, Chris Wood, to Newcastle United. The Clarets were left in a terrible position as their then top goal-scorer, Maxwel Cornet, was unavailable due to national duties with Côte d’Ivoire. Burnley re-invested the £27m for the New Zealand striker on Wolfsburg forward Wout Weghorst. Since playing his first game for Sean Dyche, Weghorst has given many Burnley fans hope for survival this year. In this player analysis, we will see who fits better at Burnley. This will also include a tactical analysis for Burnley to see which player fits Sean Dyche’s tactics.

If you have ever watched Burnley under Sean Dyche, you will know that Burnley do not play tiki-taka football, and Burnley do not gegenpress. Instead, the tactics at Turf Moor is, in my opinion, a refreshing throw-back to an era gone by. Watch any game, and you will see two banks of four and players playing for the shirt. Direct football, long balls and through passes are all key aspects of Burnley’s football.

In this example, we can see Burnley’s tactics in play against Newcastle United.

Dwight McNeil wins the ball back, and the whole Burnely team know precisely what to do. Matthew Lowton points to Ashley Westwood, circled in green, to play the ball forward. Maxwel Cornet is ready to attack a through ball, even calling for one with his arm gesture.

Westwood then plays the pass, but only three Burnley players commit to the counter-attack despite needing a goal to get ahead in the game. As we can see, Westwood does not commit himself forward as Dyche imposes a rigid structure onto the team.

Eventually, the counter-attack leads to nothing of any note. However, we can see that Burnley attack quickly, with few numbers and play with a rigid structure, all parts of their tactics and philosophy.

Another integral part of Burnley’s tactics is long balls. When you close your eyes and think about Burnley, long balls up to a big striker is what you think.

To put some perspective on that number, Chelsea FC with one of the best target-men in the world, Romelu Lukaku, only produce 1.648 high crosses to low crosses, which is only 45% of Burnley’s ratio. 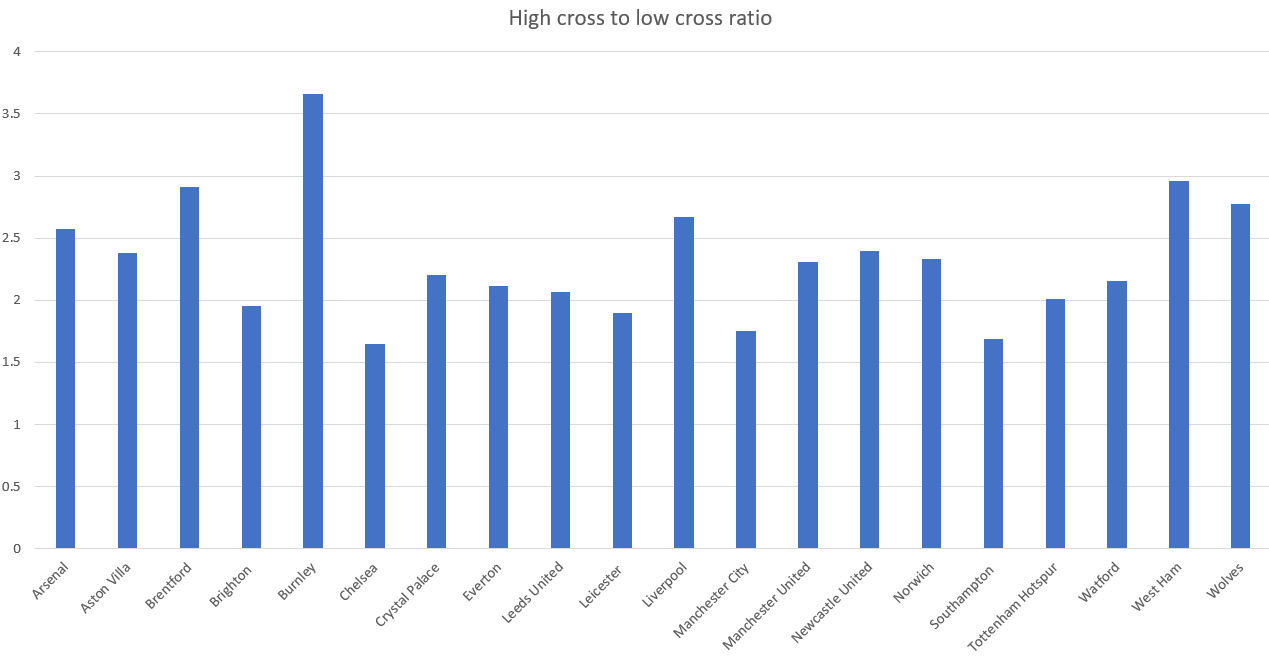 Having done some tactical analysis, let’s look at why Chris Wood was a success at Turf Moor.

Chris Wood has bought from Leeds United in the summer of 2017 for £14.7m. After scoring 44 goals in 88 appearances for Leeds United, Wood seemed like a promising option, and he was.

Scoring 53 times over the course of 165 appearances for Burnley, Wood was undoubtedly a success for a team struggling with relegation. But how did he fit Sean Dyche’s system?

As mentioned previously, Burnley would, and still do, play a lot of long balls forward, and Wood was a linchpin for their direct play.

Chris Wood tops the most aerial duels (274) and aerial duels won (124) out of every forward in the Premier League this season.

Looking at this example of Chris Wood, we can see how Burnley used his target-man strengths effectively.

In the first frame, Wood wins the header from a Nick Pope goal-kick. Wood gets in front of his man, which is an excellent idea in that situation. This is because the only options Wood had been to either pass to Maxwel Cornet, who was being marked securely or head the ball back to one of his teammates in space.

Then, Wood moves into the half-space on the left (unable to see in the image). Burnley could try and play the ball to Dwight McNeil or Ashley Westwood; however, they opt to play a long ball towards Chris Wood.

Wood then uses his strength and good first touch to bring the ball down. McNeil (circled in blue) goes to the half-space, and Charlie Taylor (unable to see in the image), makes an over-lapping run.

The last frame paints a perfect picture of how pivotal Burnley’s attacks were on Wood. Wood has a decision to make, pass the ball to Mcneil or Taylor with only Cornet in the box. Cornet is not a good header of the ball, and it would be unlikely to result in anything more than a goal kick. Or, Wood can take a shot himself to catch Islan Meslier off guard.

If Cornet were in the same situation that Wood was in for the last frame, then we would have seen Cornet pass the ball to McNeil or Taylor so they could cross the ball into Wood.

Wout Weghorst was brought in from Bundesliga team Wolfsburg for £12.6m during the past January transfer window, and it is easy to see why.

During the 2020/21 season, Weghorst contributed to 36 goals in just 41 games. He also started 33 out of Wolfsburg’s 34 Bundesliga matches, with the other coming from the bench. Appearing consistently, scoring lots of goals and creating chances, Weghorst was outstanding.

This season, Weghorst has slowed down slightly. In 18 Bundesliga matches, the Dutch striker only scored six times and assisted just once.

Despite this drop in form, Burnley still bought Weghorst, and it has worked out very well at Turf Moor.

First, let’s look at the towering striker’s movement off the ball, one of the reasons why Sean Dyche wanted Weghorst.

During a game between Wolfsburg and Werder Bremen, Weghorst shows his masterful movement.

In the first frame, we can see Werder Bremen had set up their two defensive lines, and their midfield was blocking any passes towards Wolfsburg forwards.

Maxence Lacroix plays the ball out to Ridle Baku as he was the only option available that could get the ball up the pitch. Baku is surrounded by four Werder Bremen defenders, three of which go to close down the German full-back. One defender is brought away from Baku because of Weghorst’s run. Weghorst has no intention of getting the ball, as shown by his lack of gestures. Instead, the 6-foot 4-inch striker drags away a defender so that Baku can get his shot away. As a result of his movement, Baku’s shot led to Wolfsburg’s first goal in a 5-3 win over Werder Bremen in November 2020.

Now, let’s look at Weghorst during his first few games at Burnley.

Another example of a Burnley defender on the ball, looking for a trademark long ball towards the forward, James Tarkowski is looking forward for the movement of Weghorst, and he spots that he is available.

Weghorst darts quickly away from his marker, Cristian Romero, so that he can get the flick-on.

Weghorst sees Jay Rodriguez’s run and manages to head the ball straight to Rodriguez, which is an underrated skill.

But, the best part about this whole play is Weghorst’s movement after the header. As soon as Weghorst’s feet hit the ground, he darts in behind Romero. Using his high game intelligence, Weghorst recognises that Romero is out of position, something that will not often happen as he is an elite central defender managed by a world-class manager Antonio Conte, so he sprints into the gap.

Unfortunately for Burnley, nothing major culminates from this scenario. Despite this, Weghorst showed a glimpse of why he is heralded as one of the signings of this January window.

Again, Weghorst showed off his heading ability against Liverpool’s Fabinhio. Weghorst uses his tall frame well and can win aerial duels against Fabinho, who is not a wimp.

Weghorst does not only win aerial duels when attacking the ball, but he also knows how to defend headers.

First, Weghorst, circled in green, is completely in line with his defence. He is not playing any onside and he is ready to run back. These factors are key when defending free-kicks as if you are in line with your own defence then it is easier to play your opponents offside.

Next, Weghorst is challenged to win the header and he does so easily. He is able to head the ball away from any Brighton players ready for the rebound. If Weghorst had headed the ball towards one of the Brighton players circled in red then Burnley would have to quickly defend against another cross or shot. As a result of Weghorst’s header, Burnley was able to organise their defence again and Brighton did not create a big chance.

Who has been better this season?

It is hard to argue Wood’s corner having only scored three goals this season, for both Burnley and Newcastle. However, Wood’s performances were bigger than just goals. Wood won headers, on a level above every other striker in the Premier League. Winning headers are vital to Burnley’s tactics as they utilise a target-man. Wood was also consistent over the past seasons, and this poor performance could simply be down to both injuries, for players like Maxwel Cornet, or a general lack of quality catching up with Burnley.

Additionally, a lot of other teams improved upon their first XI in the summer. Norwich bought Milot Rashica, Josh Sargent, Ozan Kabak, Brandon Williams, Billy Gilmour and more. Watford introduced Emmanuel Dennis and Joshua King to Vicarage Road as well as others. Everton, with a limited budget, brought in Demerai Gray and Andros Townsend. Thomas Frank bought Kristoffer Ajer, Yoane Wissa and Frank Onyeka. On the other hand, Burnley only brought Maxwel Cornet, who has been amazing but wasn’t available during January because of the AFCON and other reasons. They also bought Connor Roberts, but he has only appeared in eight Premier League games this season. In conclusion, some of the blame for Wood’s poor performance in front of goal can be placed on the quality of the squad.

At any rate, Weghorst is simply the better option. Since coming into Turf Moor, Weghorst has scored once and assisted twice in just six games. Weghorst has also been pivotal in Burnley’s recent upturn in form, having achieved nine points out of the 18 available in February which included games against Liverpool, Manchester United and Tottenham Hotspur. Weghorst is quicker, a better finisher and more dynamic than Wood. Wood is a fantastic player but Weghorst is on a different level in terms of goals, assists and the eye-test. To put it into perspective, Weghorst could easily be playing for Arsenal right now, ahead of Alexandre Lacazette or Eddie Nketiah. Finally, after the tactical analysis, it is clear to see that Weghorst also fits into Dyche’s tactics.