Player recruitment in football is never an easy process. Even if you are recruiting for a club at the top level of the game with the ability to pick from an almost unlimited pool of players there are still certain limitations that make the process more difficult.

Let’s take Liverpool as an example – with the exception of players at maybe two or three clubs I would argue that Liverpool are able to attract players from anywhere in the footballing world. This does not mean, however, that there are no limitations in place on Liverpool in the market. While almost any player would welcome the opportunity to play for the English club there are very few who actually meet the criteria to do so. In order to play for Liverpool, a player needs to be able to play at a certain standard and to be the correct age and position to meet the club’s impressive succession plan. From a pool of thousands then we then come down to a pool of players that is around the 100 mark and within that, the criteria will see the pool of potential players cut down even more.

If we flip the spotlight slightly but remain in the top flight of England and consider the available player pool for a team like Brighton then the picture is perhaps different, Arguably those 100 or so players that Liverpool could potentially target will be out of reach for Brighton. The tier of players at the next level down, where Brighton could realistically shop, is much broader though with more variation and the potential to find a bargain.

My examples above may be a little facetious though as Liverpool have consistently shown themselves to be capable of recruiting from outwith their apparent pool of available players and finding interesting signings. Previously we saw this with the signings of the likes of Andrew Robertson and Giorgino Wijnaldum, both of whom came from clubs that had been relegated, and now with the signings of the likes of Diogo Jota and Luis Diaz. I would argue, however, that Liverpool have developed their recruitment process to the point that they are now identifying and signing players who could be in that tier of 100 or so players and they have the bravery and trust in the process to sign players from outside the obvious market.

Liverpool are generally held up as an excellent example of a club who know who they are from a footballing perspective and that understand how to translate that information into a cohesive recruitment strategy.

What do we mean by this though? Well, let’s take a closer look using two teams in the French top-tier as examples.

When we are recruiting players for first-team level at any club we have to understand several important factors as a part of the process. Firstly, what does our current squad look like? If we have three players who are capable of playing right-back then that is not a position of priority while if we have only one recognised centre forward then that does become a position that we have to look at closely. What does our squad look like in terms of player ages and contract lengths? Are there positions in which we have ageing players who have expiring contracts? If so then we need to put some work in there. Then how are we performing and what do the budgets look like?

All of the above makes sense, right? But what about style of play and general tendencies? For this, we can rely on what is verbalised in the media. Coaches will say that they want their team to “keep the ball on the ground” and to “work the ball into the area to create chances” But does this kind of language actually meet what we are seeing on the pitch? In order to understand exactly what a team’s style of play looks like we can turn, as we so often do to data. In order to explain this. As part of this case study, we will look at two clubs in the French top-flight in Rennes and Lorient and show how we would recruit a striker based on how they are performing on the pitch. 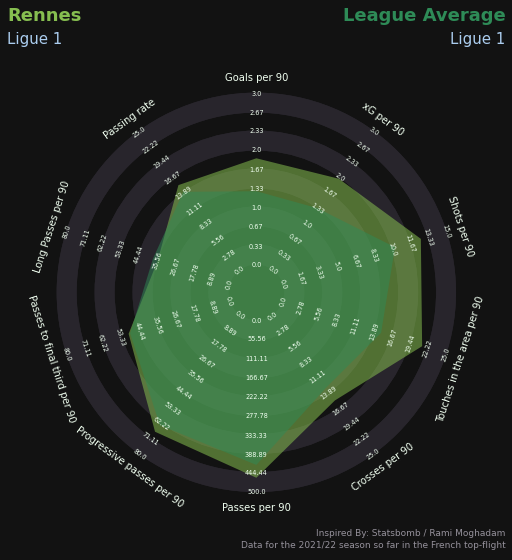 Here we have a simple radar plot that contains several key metrics in the attacking and passing/ball progression sides of the game plotted to show Rennes’ output and the league average for the French top-flight. I should perhaps point at this point that this radar does not capture the specific metrics that I would use at my current club but they do provide an interesting example. The first thing to note is that when looking at the ball progression aspect of our radar Rennes are largely league average with the exception of slightly more passes per 90 and progressive passes per 90 and a slightly increased passing rate (passing rate shows tempo by telling us how many passes a team is playing over a set period of time). When we consider the attacking aspect of the graph, however, the picture starts to shift. Rennes are above average in all metrics but significantly above average in terms of touches in the opposition area per 90, shots per 90, xG per 90 and importantly goals per 90.

So, what does this tell us in terms of our approach to finding potential forward players to scout and perhaps recruit? Well, we know that Rennes are creating significant levels of goalscoring opportunities and as such, we need to concentrate on finding a forward who can make the most of those opportunities when they are created.

Next, we can start to visualise how this would look within a dataset. For the example, I have chosen to look at forwards in the top-5 South American leagues and in keeping with the general trends in the French top-flight we will concentrate on players who are 26-years-old or under and who have played at least 650 minutes this season. The metrics on the scatter graph are intended as a means to quickly visualise a group of players who might fit what we need. This, however, would only be part of the process and once I have an initial shortlist from this process I would then take the data and calculate the player’s performance for their team as a % of involvement in the key metrics. I have written previously on this subject here.

We are looking for forwards who can effectively finish the opportunities that Rennes are obviously creating and as such we will look at shots on target % on the vertical axis and xG per shot on the horizontal axis. This tells us which players are getting into good areas and are hitting the target when doing so. Immediately then we start to see which players are most likely to be able to convert the chances that Rennes are creating. As you can see I have picked out a couple of players to highlight further within the data.

But what if your team are not performing well, as Rennes are, and are not at the top end of the table and challenging for Europe, as Rennes are? Well, the process is the same with some slight alterations. 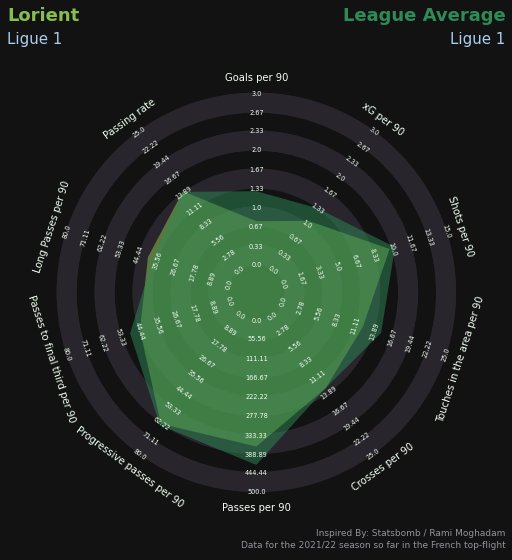 This time we will look at Lorient who are battling at the other end of the Ligue 1 table. Once again the first part of the process is to consider team data and we see a side who are perhaps more direct in the build-up phase than Rennes and who are struggling across the board, apart from with crosses per 90, as compared to league average. Whilst for Rennes we considered forwards who could add to what they already had in terms of getting into areas that could take advantage of the chances that were already being created, we have to be more creative for Lorient. They aren’t creating enough as a team and as such, we would need a forward who showed the clear ability not to take shots from good areas but to convert those chances when they were eventually created.

We can keep the horizontal axis constant but this time we use goal conversion % (the % of shots which are converted to goals) as the horizontal axis in order to hone in on the forwards who are capable of converting chances even if they are limited. Once again, I have highlighted a couple of players within the data who may be interesting to a team like Lorient.

The above is, of course, just an example and a way to visualise the theory. When you are working at a club within the recruitment department, or even when you are writing recruitment-related pieces, it is incredibly important that you understand firstly what the coaching staff are trying to do, and then translate that into relevant data and metrics, and then understand what is actually happening, using those same metrics, so that you can start to use data as an effective part of the recruitment process.