Many players start being linked with multiple clubs while we are moving closer to the season end and the 2022 summer transfer window’s opening. Some of the best performers in the leagues are already fought over and it is difficult to predict what their future looks like.

The 22-year-old Isaiah Jones is one of the players that sparked the interest of a few Premier League clubs with his successful displays for Middlesbrough in the Championship. While the team are rather inconsistent in their performance, the youngster impressed with his contribution from the flank which has resulted in providing nine assists so far, being the second-best player in the league in that indicator.

Jones also impressed in his team’s FA Cup game against Tottenham, where Middlesbrough surprised the Londoners with a 1-0 win in extra time.

The right wing-back is already linked with Leeds United, Manchester United, Spurs and Arsenal where he could contribute to all phases of the game and increase their attacking efficiency.

In this scout report, we use tactical analysis to explain what his contribution to Middlesbrough’s current set-up is and what are the qualities that make him a target of the abovementioned teams.

Role in the current set-up

Chris Wilder took charge of Boro at the start of the season and opted for using a back-three formation, most frequently switching between 3-5-2 and 3-4-1-2. Jones is employed as a right wing-back and the current tactics make him split his responsibilities between the team’s attacking efforts and their defensive ventures.

Boro tend to attack through the flanks by using their wing-backs to progress the ball and they highly rely on Jones’ movement on the right, as he is the more active player in possession and is able to take on the opposing players through his dribbling and support the team in the final third with crossing attempts.

They don’t rely on crossing too heavily, though, as they have a mixed attacking approach and but they try to play with width and use Jones to progress the ball and bypass the press.  Once he reaches the final third he wouldn’t only cross the ball but also orchestrate play with short pass combinations or cut inside with the ball.

Despite his position, he has a rather playmaking role and is responsible for distributing the ball to key areas and initiating attacking movement.  In many situations, Boro rely on the players’ individual skills for advancing the ball, which has them frequently use dribbling to break through defences. Jones’ dribbling attempts also support the team’s attacking actions as it often allows him to escape the press and retain possession.

The team have one of the highest PPDA rates in Championship and their press, combined with their success in direct challenges makes them rather solid defensively, but their inability to defend set-pieces affects their defensive performance and decreases their efficiency. Jones’ contribution is key as he involves in ball recovery and his judgement and right timing allow him to stop the opposition from breaking through the wide areas.

While the number of his assists might be enough to prove his efficiency, the 22-year-old’s impact on Middlesbrough’s actions both in and out of possession is even bigger.

As mentioned, he often has a playmaking role and many of the team’s attacks go through him no matter if he initiates the attacking movement or finalises it.

He usually stays considerably high, past the central line, in order to be able to receive the ball from the highly positioned back three and initiate attacking movement. The left wing-back Neil Taylor is the one who brings the balance and positions closer to the backline so he compensates for Jones’ attacking movement.

Jones usually uses a combination of runs with the ball and dribbling to bypass the press and take on defenders and use his judgement of the game to decide whether to combine with his teammates via link-up-play or move deeper into the opposition half and attempt to cross the ball.

His successful movement on and off the ball is the reason for Boro focusing their efforts on the right, which results in 41% of their attacks being channelled through the right flank.

His 3.19 progressive runs per 90 allow the team to quickly reach the final third. That fits well to the team’s strategy and their advanced positioning which aims to overload the opposition half and use a lot of movement to expose them.

With 6.85 dribbling attempts on average, he tries to efficiently advance the ball and move into quality positions so he could support his teammates through crossing or through balls. He also tends to cut inside and engage opposing players, while his teammates overload the half-spaces and the box to be able to get to the end of his passes and score. He often cuts inside to the box but doesn’t attempt to shoot on his old. Once he has moved into a key position, he would rather try to create a chance for his teammates.

Not only his dribbling skills allow him to retain possession, but they often force the opposition into mistakes and result in them committing fouls in dangerous areas. That gives the team a huge advantage as their set-piece efficiency is high. They have scored eight goals from their attacking set-piece opportunities so far.

His spatial awareness allows him to set his teammates up successfully as with his crosses and smart passes he always tries to exploit spaces and create goalscoring opportunities.

His actions also support Middlesbrough’s counter-attacking actions as his qualities allow the team to make a quick offensive transition and reach the final third, while the other players move off the ball and position in the box, contributing to their 3 counter-attacking attempts on average per game to finish off with a shot.

The team are quite active off the ball and their average PPDA of 8.93 underlines the intensity of their pressing efforts and their aim to recover the ball. They usually adjust to their opponents’ style of play and while they do occasionally commit to pressing high, they prefer to recover the ball in midfield and focus their efforts there.

Jones contributes successfully to their defensive actions and often recovers the ball in the opposition half, giving the team a chance for a turnover. He averages 5.62 recoveries per 90 which often allows the team to retain their advanced position and create goalscoring opportunities. 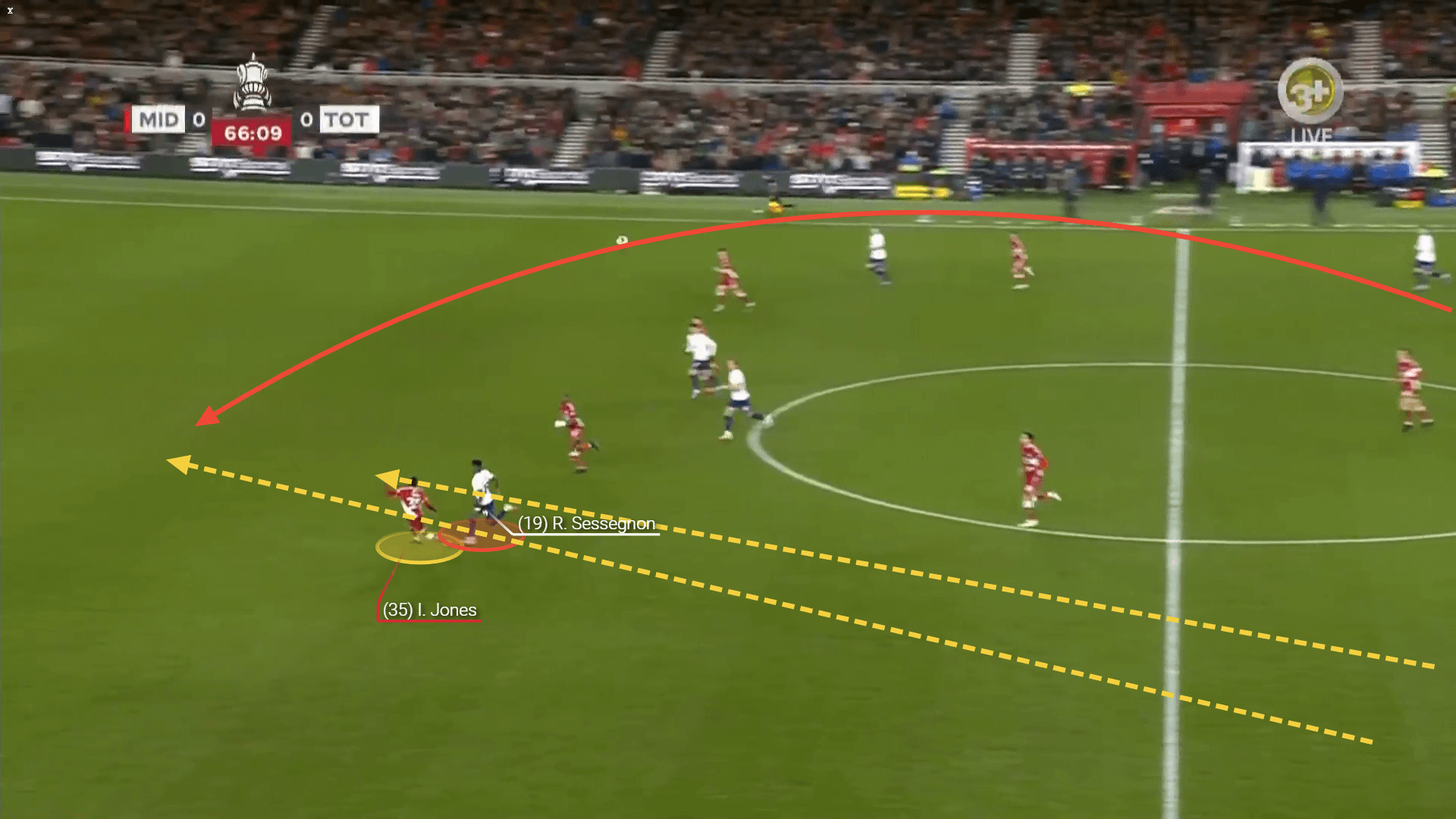 He anticipated that he intends to receive a long ball and threaten the goal so he outran his opponent and recovered the ball, saving the team in a dangerous situation.Despite his advanced role, Jones is efficient in his defensive positioning and manages to split his responsibilities well. He constantly drops back to their own half and supports the team with direct challenges, where his success rate is considerably high for his position.

As our analysis showed, Isaiah Jones has a huge impact both on and off the ball and there is no wonder Wayne Rooney praised him as a “very good player” having a “bright future ahead of him” after Middlesbrough’s victory over Derby County.

The 22-year-old has teams struggling to expose Boro through the flanks while being the main creator in attack too. His complexity makes him a target of teams who need attacking threat on the right but also efficiency in defence.