With Standard Liège struggling in early October they decided to make a managerial change. Mbaye Leye was sacked and replaced by former Amiens and current Kortrijk boss Luka Elsner. Elsner’s tenure started off pretty well, with Standard being unbeaten through his first six matches in charge. Since that good early run however, Standard now have three wins from their last eighteen matches. This has understandably made Elsner’s seat scorching hot, with many thinking he is on the verge of being sacked. So what has gone wrong?

This tactical analysis piece will look at a couple of the struggles that has had Elsner on the verge of the sack, and whether his philosophy and tactics may be to blame.

Probably the biggest struggle that Elsner has faced at Standard is their poor showings in front of goal. While they have had their games where they have overperformed xG and done well, this is not often the case. Standard’s last three matches in the league, against Gent, Oostende, and Genk, their xG has been 0.92, 0.42, and 0.51 respectively. Though low xG does not necessarily mean no goals will be scored, Standard did not score in any of those last three matches. They are also the joint third lowest scoring team in the division with 29 goals. A lot of this could be attributed to Elsner’s attacking tactics, with Standard being relatively passive in attacking moments when they should be much more aggressive. 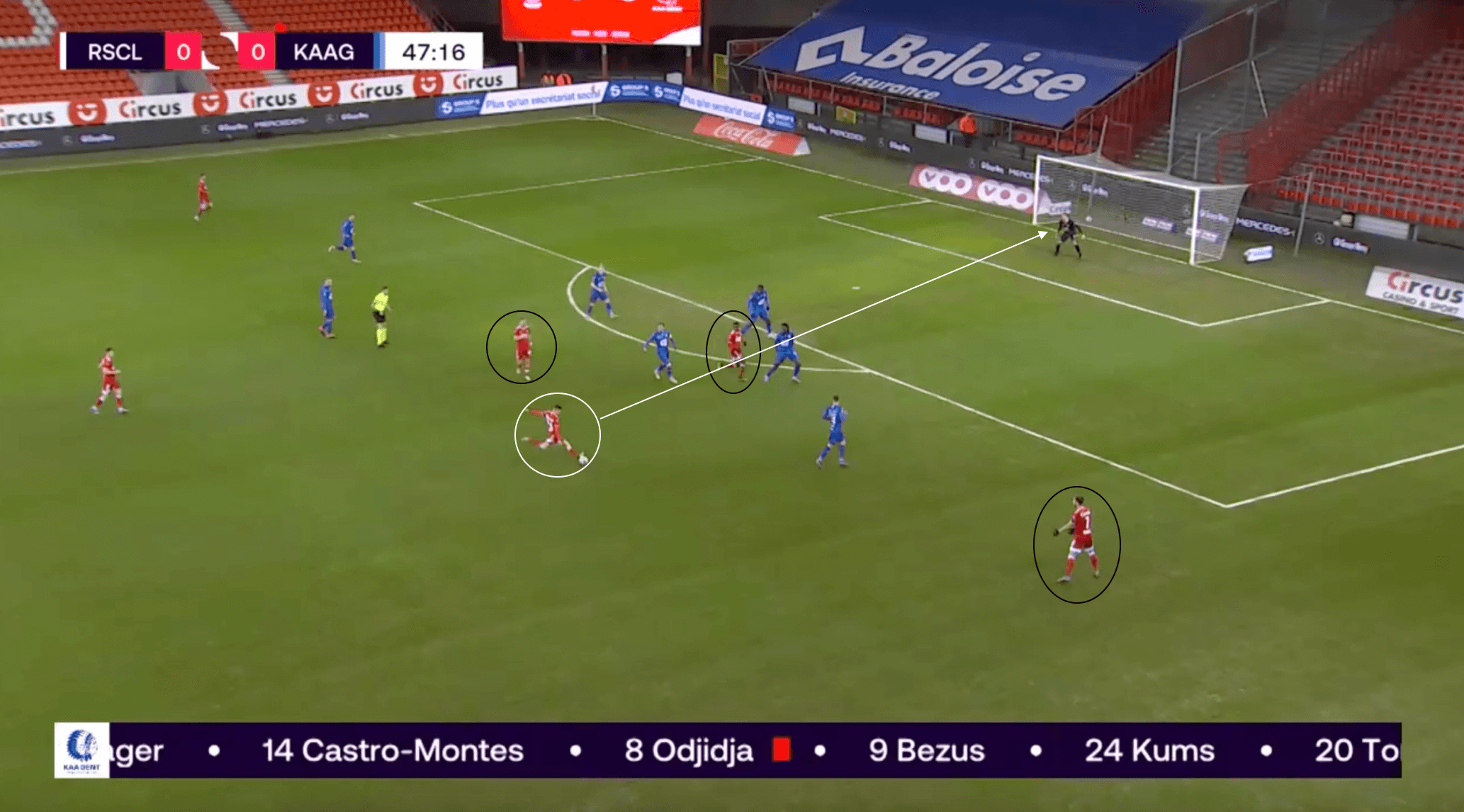 Some of this poor chance creation can be put down to poor shot selection and slow transitions on counter attacks. The phase of play above shows both of these in action. Gent are down to ten men and Standard have won possession back in midfield. They are however slow to counter attack, with only three other Standard players in good attacking positions, other than the player in possession. With no good passing options, the player in possession takes a long range shot, which is easily saved by the goalkeeper. For some reason, even with the opposition down a man, Elsner decides to stay passive while attacking, fearing a turnover and counter attack. 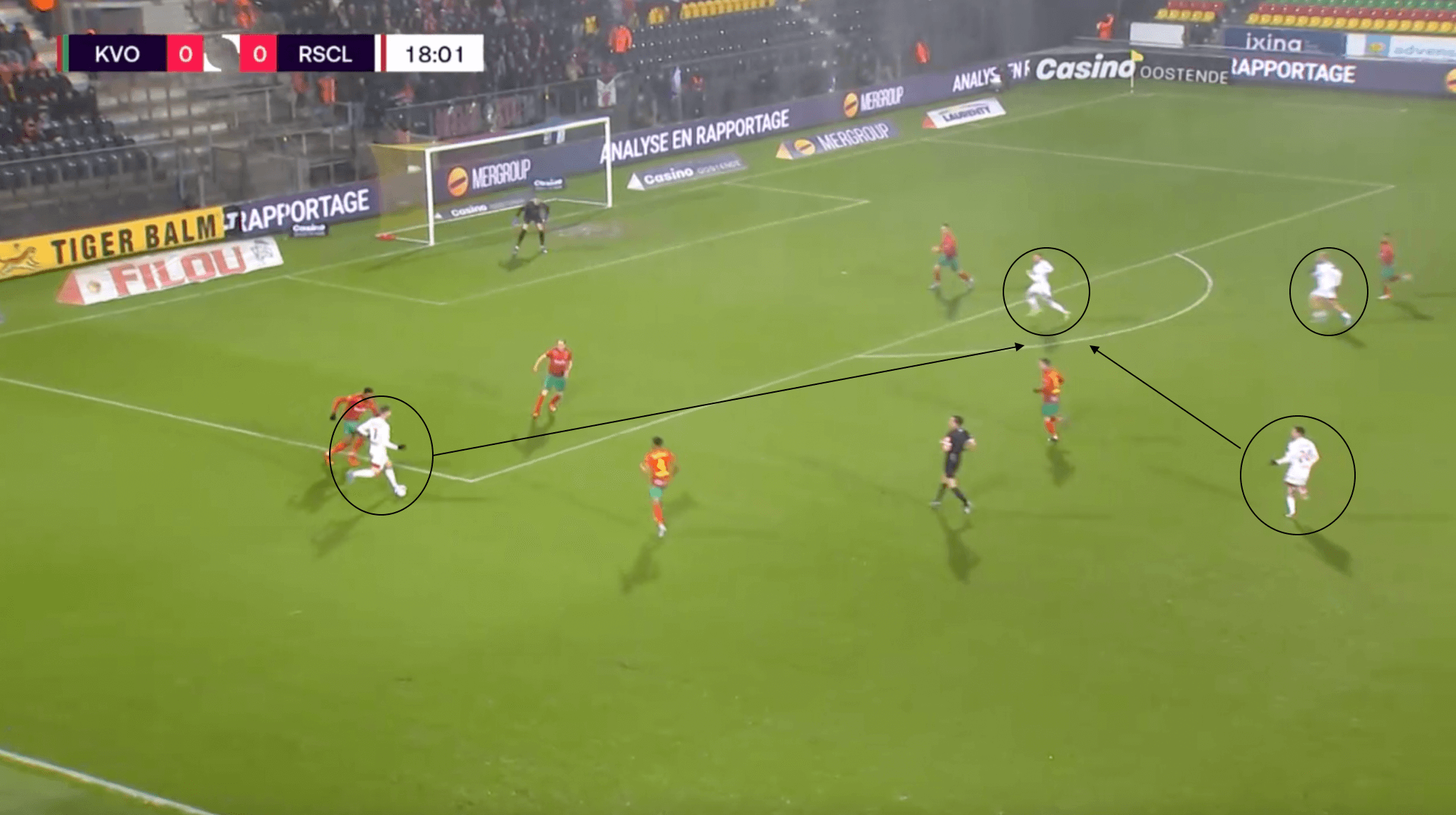 Along with this poor chance creation comes poor shot selection. This phase of play above shows this somewhat frequent occurrence. What has to be said is that this poor shot selection is due to the fact of limited options being available for the player who receives the ball. The Standard player out wide and in possession plays the only possible passing option, to the edge of the 18-yard box. The player making a run from deep gets onto the ball first and decides to shoot from the edge of the box, with the shot going wide. The other two Standard attackers make no effort to separate from their markers and make a run into the box, leaving the player receiving the ball no other option. 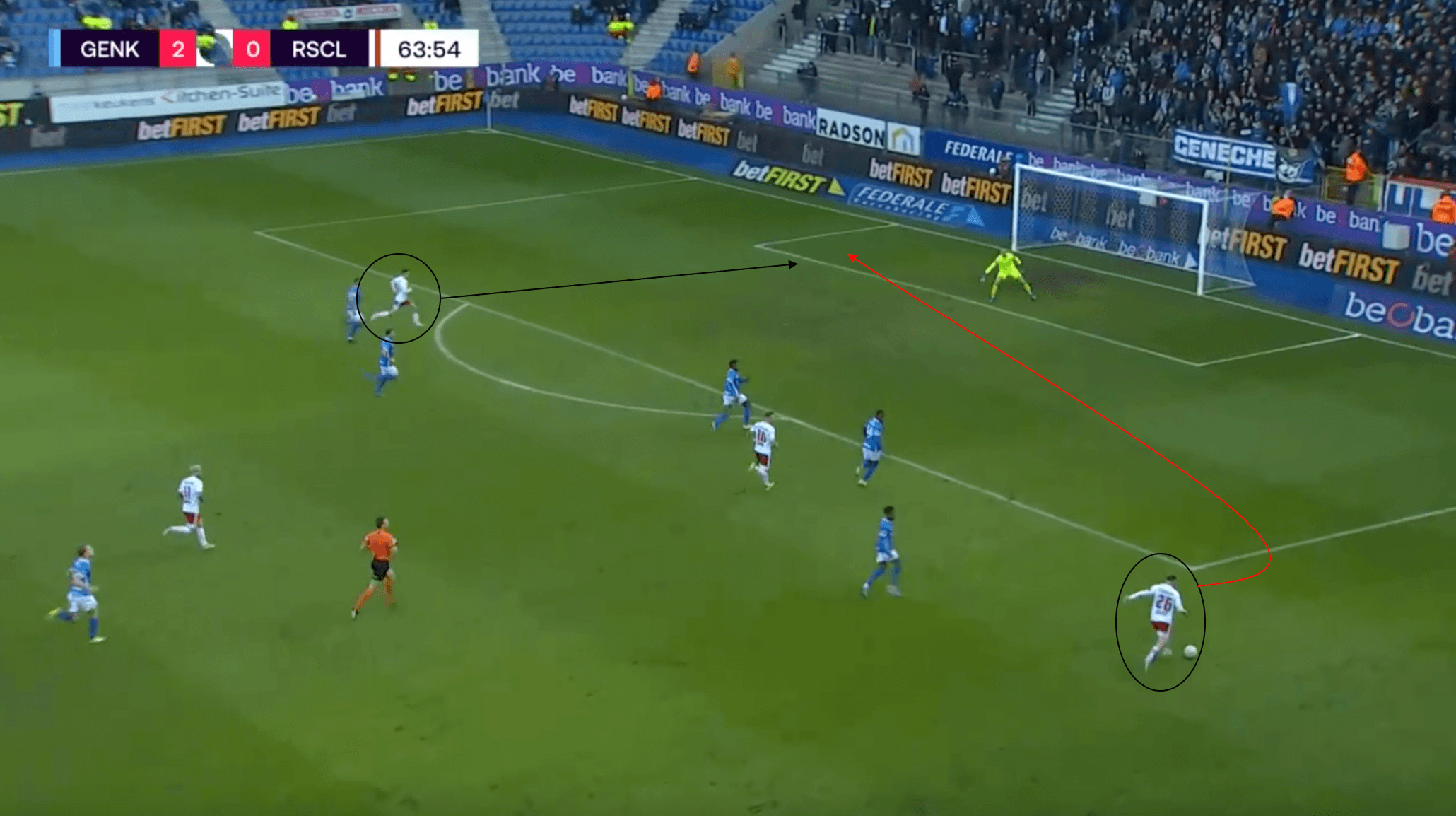 This passive approach from Luka Elsner going forward has been detrimental to the attacks that Standard have been attempting to create. Standard are currently 2-0 down, and realistically should be committing more players forward to their attack. Instead, only two players are possible options for the cross into the box. The attacker circled in black makes a great run past the blindside of the defender and towards the back post. The player in possession sends a cross into the box, but unfortunately the cross is poor, resulting in a headed attempt that goes well wide. 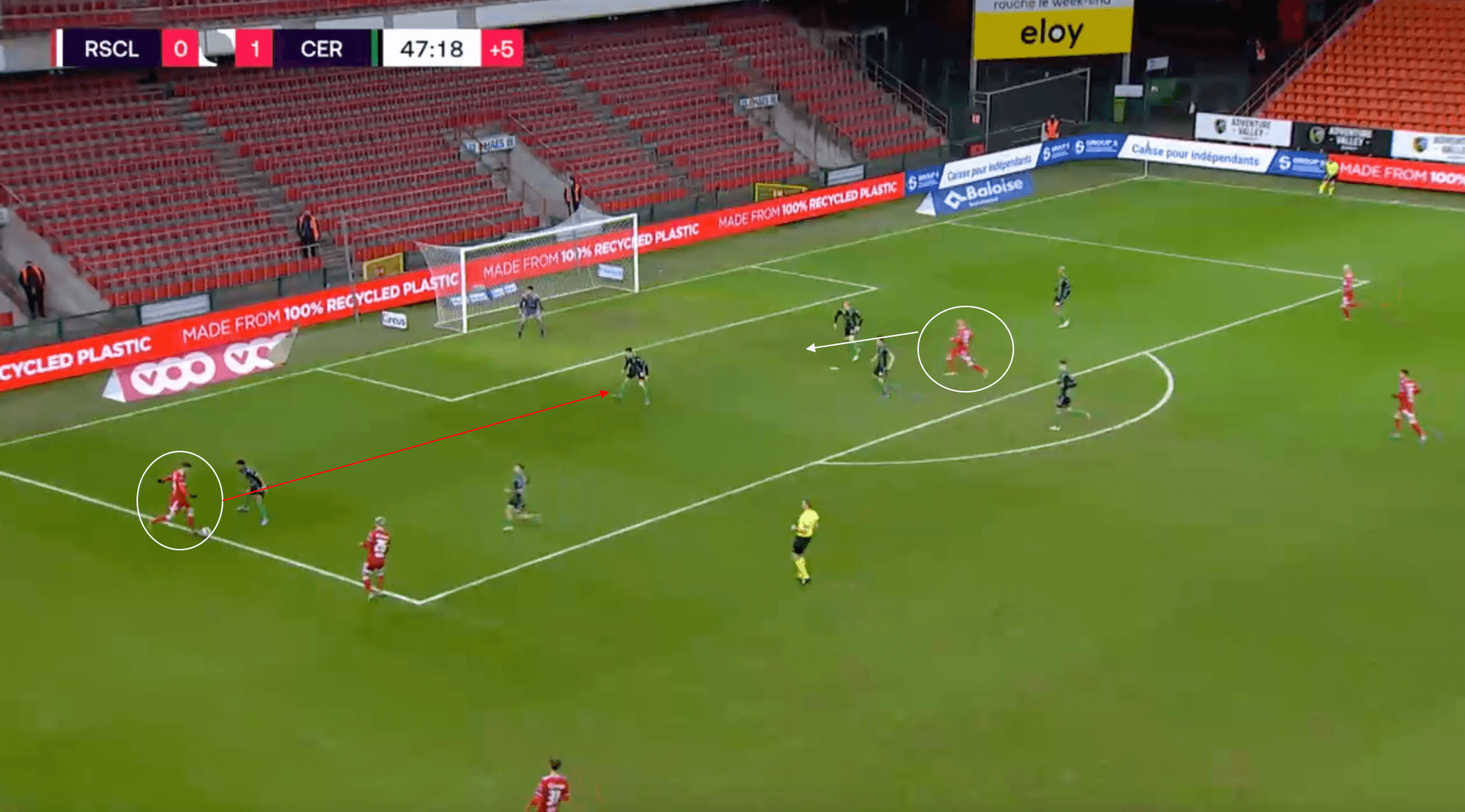 Once again, this phase of play above shows the lack of attacking intent that has been shown recently under Luka Elsner. Starting from a goal kick, the attacking buildup looked good from Standard, until this point. The Standard player is closed down on the edge of the box and needs to send the ball into the box to hopefully generate a chance. Unfortunately, only one Standard player is in the box to possibly receive the chance. What complicates this opportunity is the fact that there are four Cercle Brugge defenders surrounding him. As a result, the ball is not able to clear the first defender, with the ball being easily cleared under no pressure at all from any Standard Liège player.

While some of this lethargic attacking may go down to lack of form, a lot of this also is attributed to the tactics that Luka Elsner is implementing. A lack of players venturing into the box in attacking sequences, along with a very passive approach to attacking. With the joint third lowest number of goals scored in the Belgian league this season, for Elsner to save his job, he needs to figure out something for Standard going forward.

Lapses in concentration hurting Standard at the back

So far this season, Standard have conceded 44 goals. While this may not be anywhere near the top of the goals conceded chart, it still hurts. It hurts more when thinking about the low amount of goals that they have scored this season. Because of this number, even one goal conceded may be enough for Standard to not be able to fight back. That is what makes these common lapses in concentration defensively more painful. This is another trend that Elsner needs to reverse, and fast. 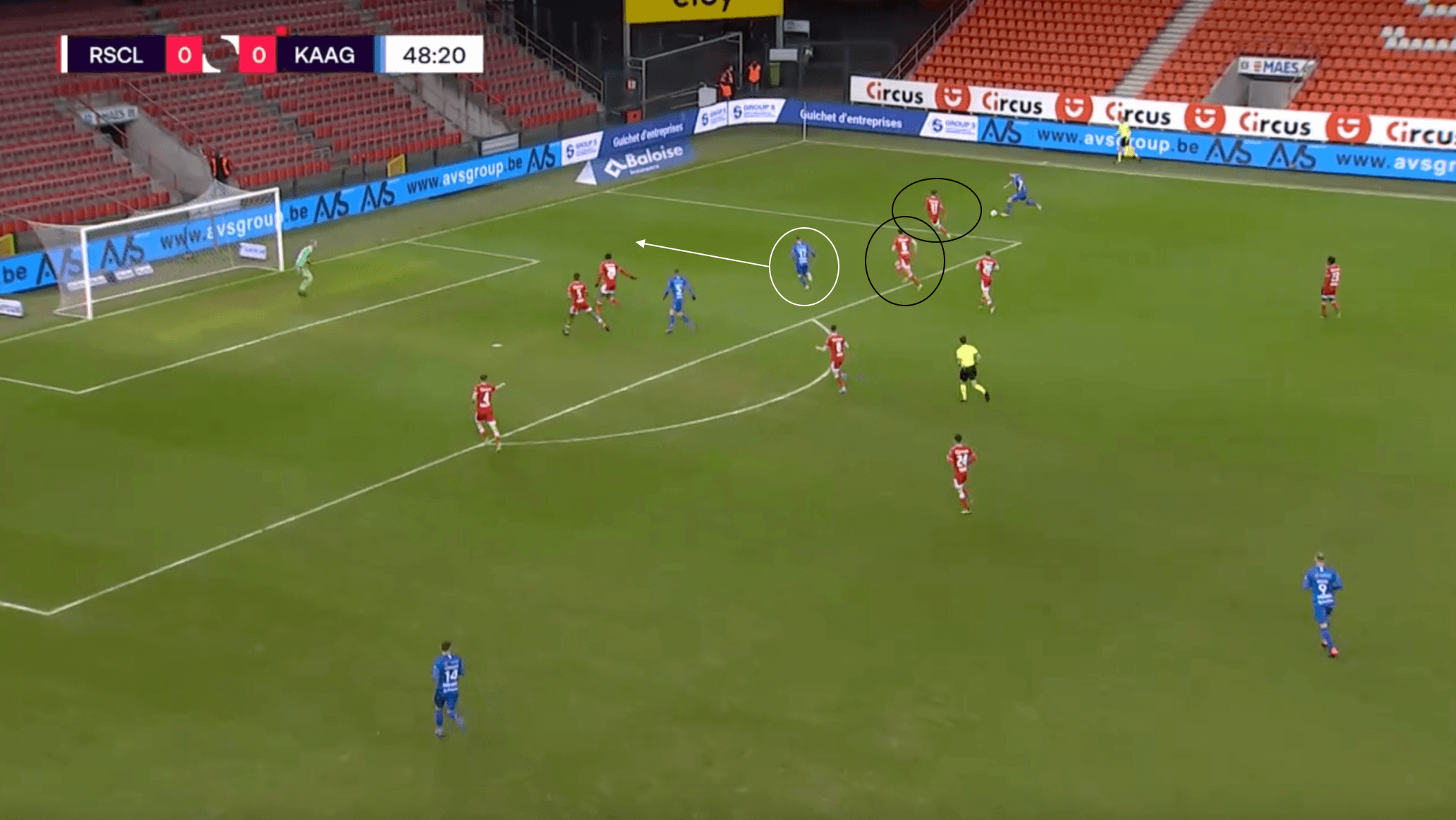 The phase of play above shows one of these examples of lack of concentration leading to a goal scoring opportunity. The Gent player out wide is looking to play the ball to a central option to create a possible goal scoring chance. As shown, the Gent attacker is already marked by the Standard fullback, but another Standard defender is caught ball watching. This allows the Gent forward to slip in behind the defence and receive the ball in a dangerous area with plenty of time and space. The ensuing shot is saved, but illustrates some of the small issues Elsner is facing defensively in regards to lack of concentration at vital moments. 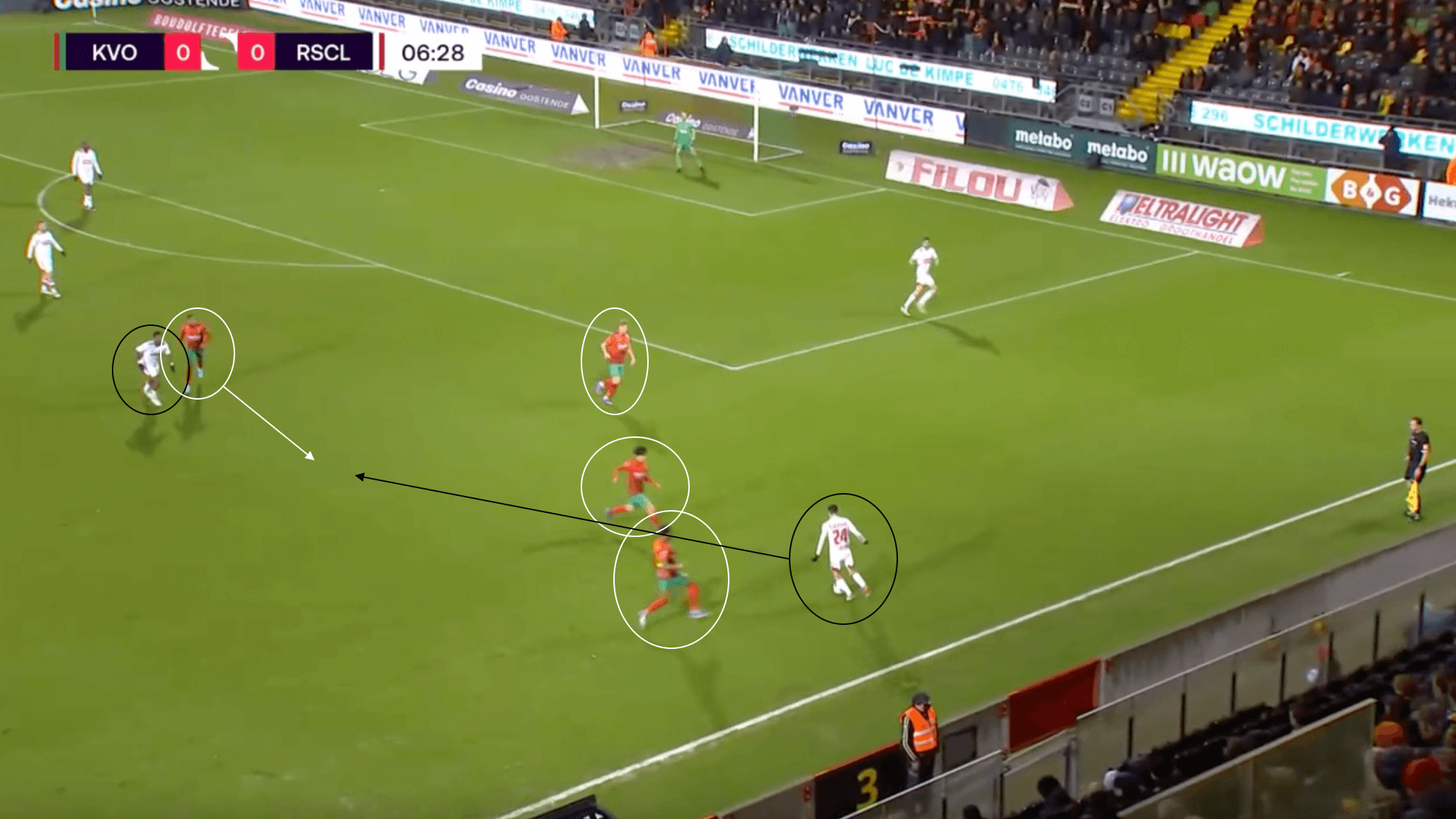 Here is another example of a lapse in concentration that leaves Standard exposed at the back. The Standard fullback is being closed down by two Oostende players, with a third lurking in the background to be an option for a counter attack. The ball is played centrally to a Standard player under pressure from another Oostende player. The Oostende player is able to jump the pass and intercept it, playing it to the free player who starts a dangerous attacking moment on the edge of Standard’s 18-yard box. Fortunately for Standard, no goal came from this lapse in concentration, but still became a worrying moment. 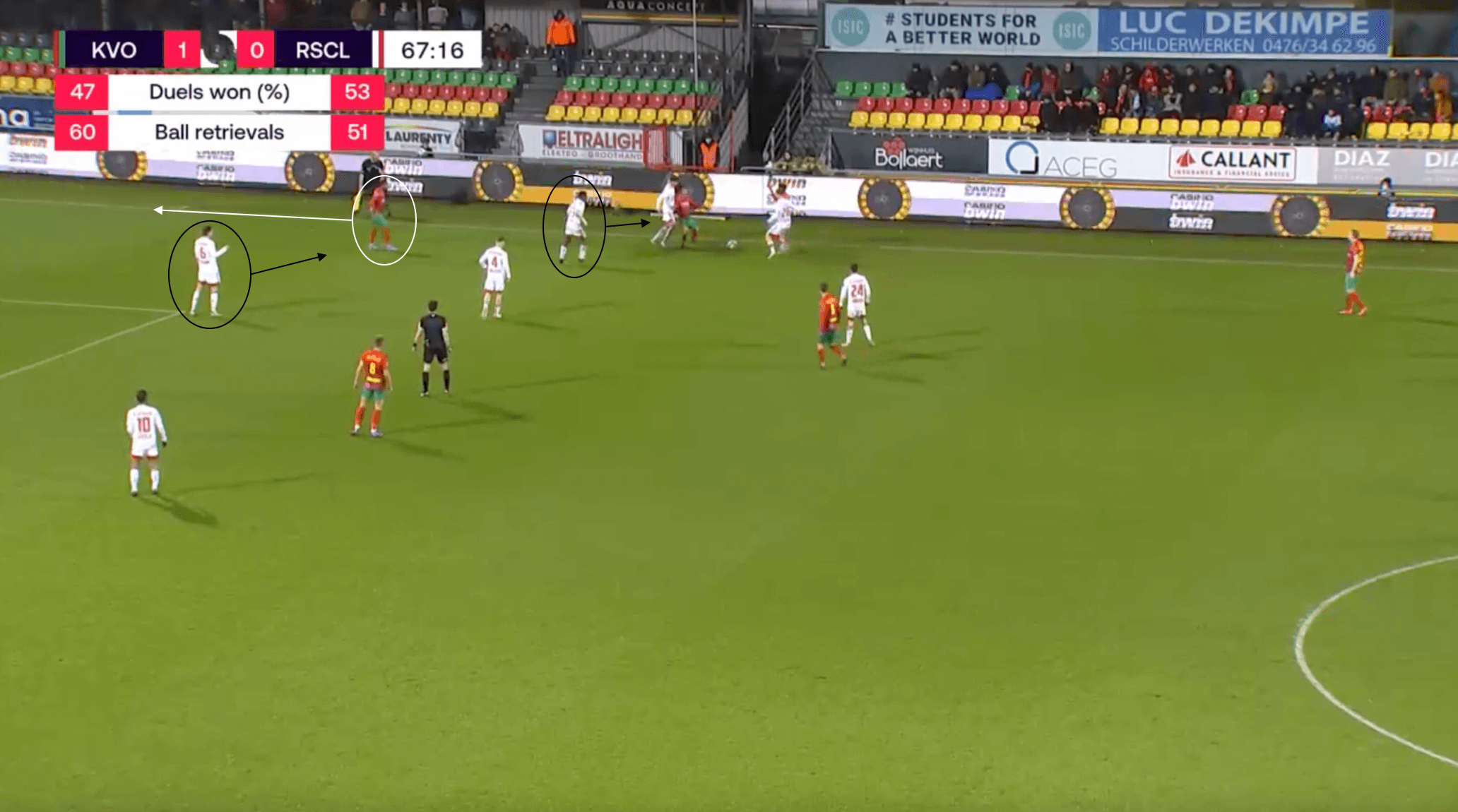 In the phase of play above, Oostende are in possession, but are closed down by two Standard defenders who are marking them very closely. The one Oostende player, circled in white, is the only available option as a possible outlet ball. The two Standard players in charge of marking him, circled in black, are caught ball watching, allowing the ball to reach him with no one pressuring him. This allows him to drive towards the byline and send a dangerous cross into the box, which the Oostende forward barely misses. Once again, due to a lapse in concentration defensively, thinking the ball could not possibly reach the free man, Standard are almost left to pay for their mistake. 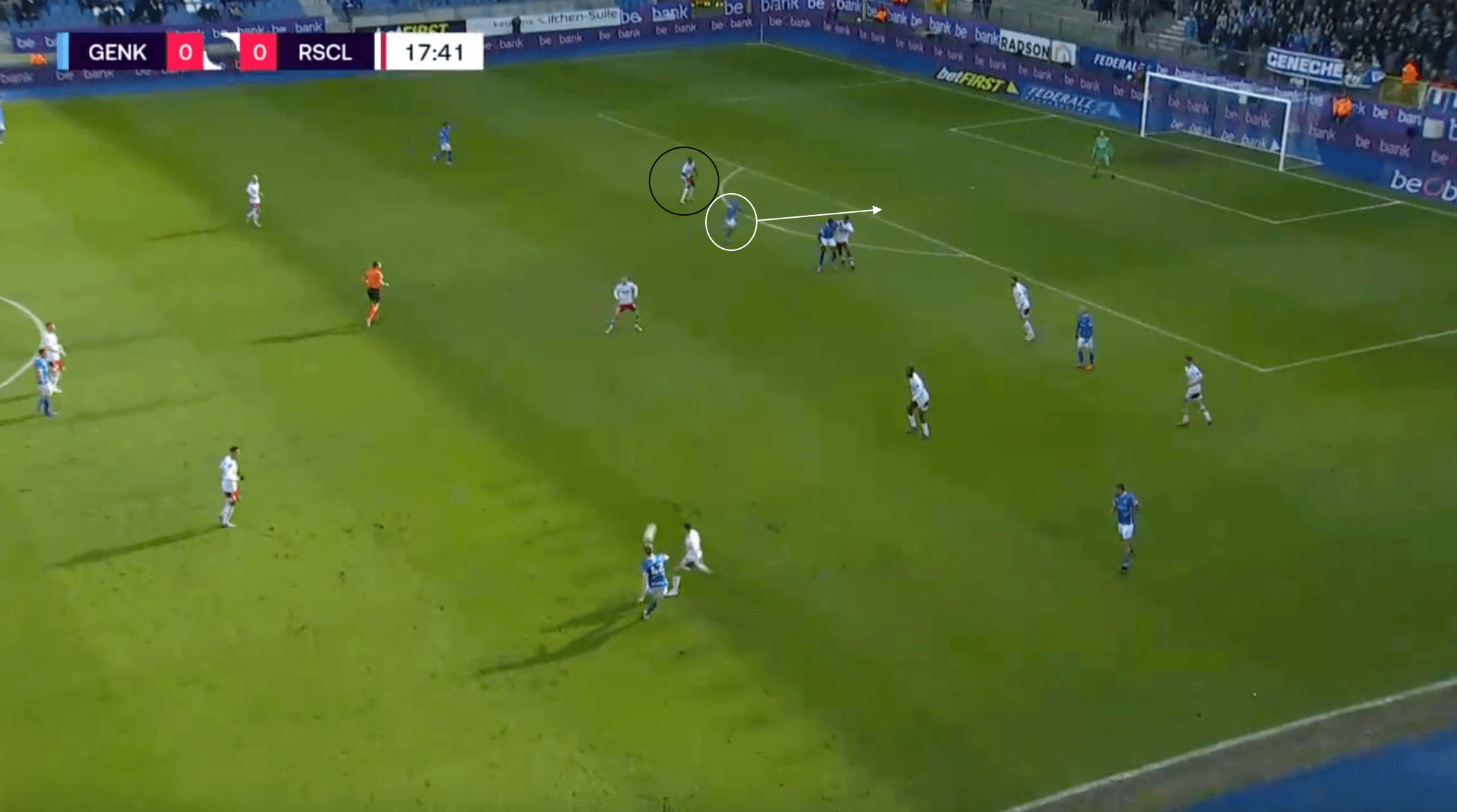 The phase of play above shows the gap that is left by the Standard defensive line, allowing the Genk attacker to get through when the long ball is played towards him. What should be said is a lot of credit needs to go to Genk’s striker, who is able to hold off the Standard centre back, allowing the space to run into. However, the Standard defender, circled in black, should have tighter marking on the attacker making a run in behind, which is not the case. Unfortunately for Genk, they overplayed the attacking sequence instead of shooting early, with the eventual ensuing shot going high above the bar, sparing Standard their blushes defensively.

What is clear is that analysis has shown that Luka Elsner is currently struggling at Standard Liège. Their lethargic attacking sequences have led them to the joint third lowest amount of goals scored in the league this season. This partnered with their lapses in concentration defensively have turned into a recipe for disaster for Elsner and has him on the verge of being sacked. With Standard currently only six points above the relegation zone, something has to change, and fast. While Standard Liège are not on the same level as clubs like Manchester United or PSG, they are still one of the biggest clubs in Belgium, and deserve to be near the top of the division, not the bottom.