Cecilia Prugna is an international Italian player who is born on November 7, 1997 and she has been playing at Empoli Women since 2016. She was recently called up to the national Italian team, exactly on April 10, 2021 and her first match was against Iceland. Prugna is currently one of the talented rising midfielders in Serie A Women and she proved several times that she deserves to be among the best very soon thanks to her solid performances from season to season.

This season in particular has been a very good one so far for Prugna as she is contributing with consistent performances and more importantly, with numerous assists and goals regularly. Despite holding the 9th position in the standings so far, Prugna was a key player in many of the team’s wins and perhaps the most recent one is the surprising win against Juventus Women, the leaders of Serie A.

In fact, scoring the winning goal against a team like Juventus means a lot for Prugna as well as her progress as a player both mentally and technically. She should exploit this opportunity to play with more confidence in the future and show her skills extensively.

In this tactical analysis scout report, we will focus on analysing Prugna’s main skills, the roles and positions that she can occupy as well as what she could improve as a midfielder. This analysis will also include some of Prugna’s best actions in terms of assists, playmaking and goalscoring.

Prugna is naturally a central midfielder. But she also has no difficulties when being exploited as a defensive midfielder or when playing as a left midfielder. Prugna’s statistics explain a lot of things on her performances and effiency as they also reveal what needs to be improved. She makes 5,42 interceptions per match and has a passing accuracy of 73,5%.

This proves that Prugna is both valuable in the defensive phase and more importantly in the build-up and when in possession. Having a passing accuracy of 73,5% is an excellent average for the Italian midfielder who can improve this rate even further especially by focusing on enhancing her crossing accuracy which is quite low compared to simple passing and key passing accuracy. She has an average of 20% in terms of crossing.

This however does not mean that Prugna is not a good crosser. On the contrary, she made several assists using accurate crosses to strikers running at the back of defenders, but what is lacking is consistency in terms of “key crossing”.

Prugna moves very well between the lines especially when in possession and this gives her much room for manoeuvre. Moving towards free spaces whenever possible is fundamental for midfielders since they are usually marked strictly. Therefore, she should always aim for creating space for herself in order to be in a suitable position when receiving the ball.

What Prugna often succeeds in doing as well is that she scans the pitch in every opportunity she gets in order to win some precious seconds in terms of decision-making before receiving the ball. That allows her to pass more accurately and make excellent passing decisions more often.

As you can see in the following picture, Prugna is a player who covers the whole pitch and doesn’t only stay in a specific area. Moreover, being a midfielder with defensive and playmaking duties is what makes it necessary for her to advance and retreat whenever needed. 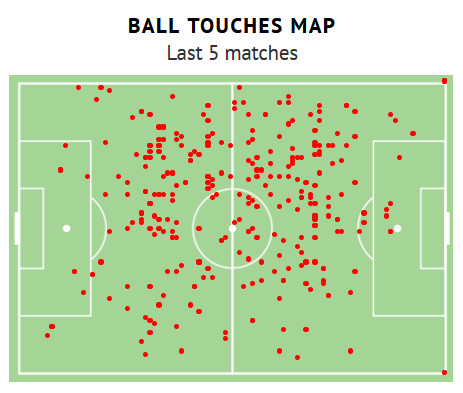 Prugna is becoming one of the best midfielders in Serie A in terms of assists and playmaking. It is true that the number of her assists is not huge, yet, the quality of her passes in the final third have been creating the difference for Empoli during this season. For instance, you can see how she received the ball in a suitable passing position here before providing an excellent cross to her attacking teammate using her “other foot” because she plays with both feet with almost the same control and precision.

This might sound normal these days but it is very beneficial for players and especially for midfielders because they usually receive the ball under pressure and must know how to deal with such complicated situations quickly while being accurate with both feet. Therefore, this ability gives an advantage for Prugna over her markers in similar situations as it also allows her to surprise them and/or confuse them with quick unexpected passing decisions. 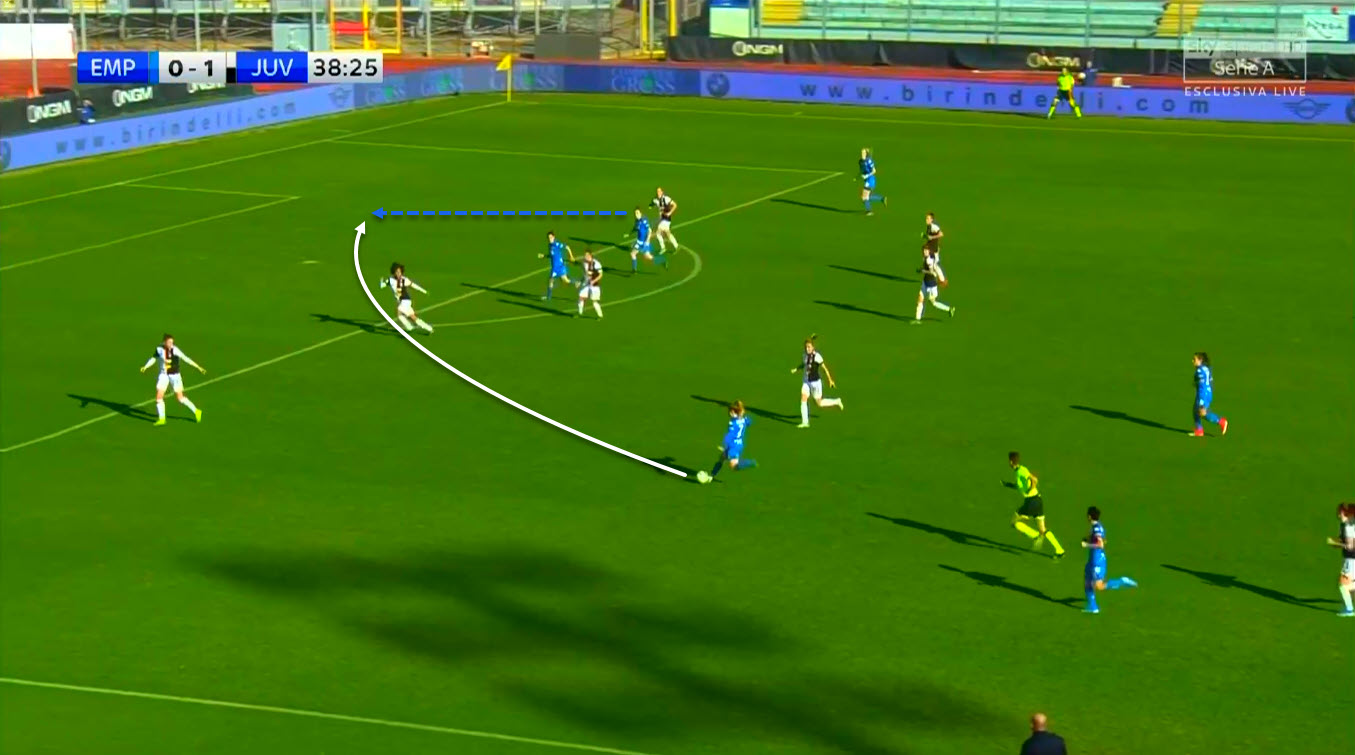 In addition, she can be extremely dangerous when she is surrounded by players who move a lot into space. Despite having to play just in front of defence at times, she can still provide some long passes towards the box and at the back of the defensive line as soon as she notices a striker or a midfield’s movements towards that area. Nevertheless, she doesn’t do this so often and that’s one factor that makes her crossing accuracy not good enough. In order to be more efficient, Prugna should attempt to play such passes more often since she has got the quality and the precision needed to serve her teammates accurately like she did in this example. 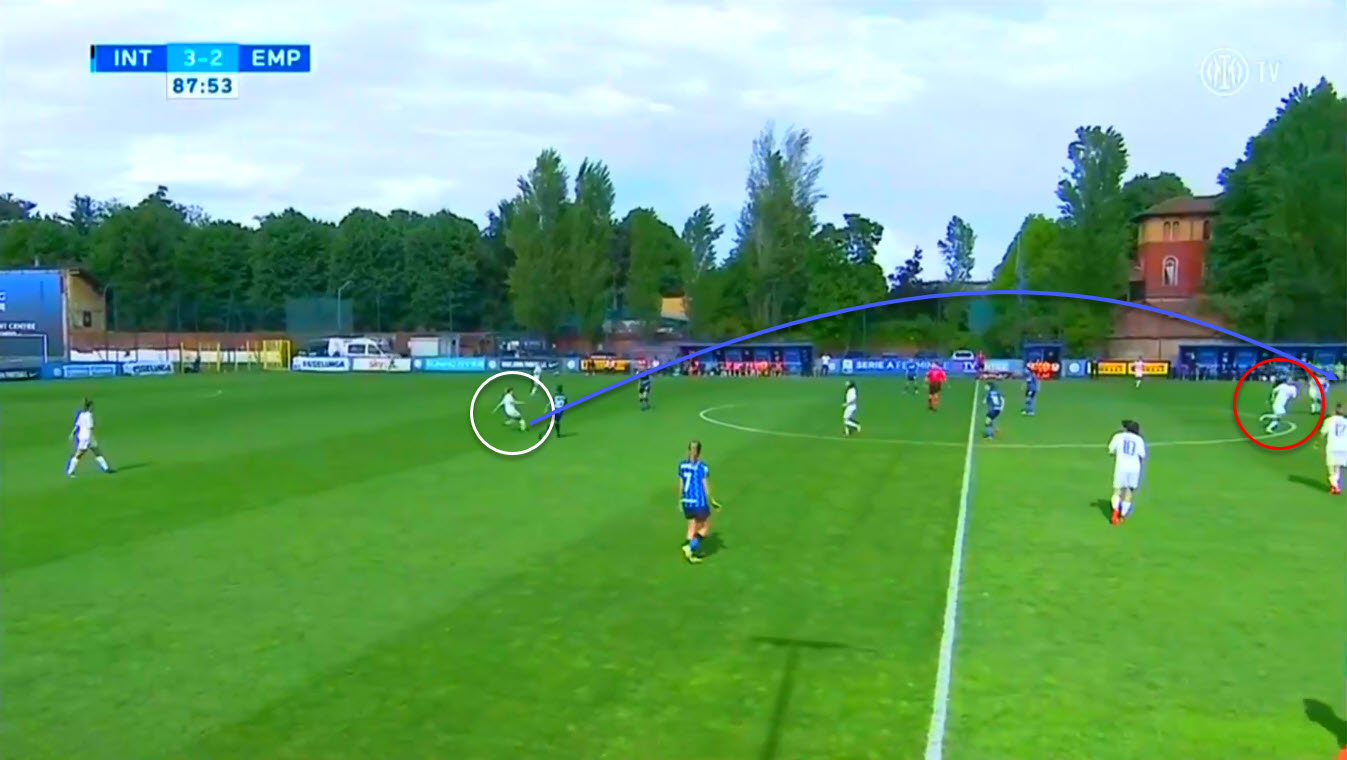 As it is shown above, Prugna saw her teammate’s intention to run behind Inter’s defensive line, as she also noticed that her teammate was not marked. Then, she immediately crossed the ball to bounce in front of her and inside the box, creating a one-on-one situation with the goalkeeper and therefore, providing an assist for an Empoli goal. It should be mentioned that this long-pass was also executed with Prugna’s left foot.

Such actions should be worked on during training in order to make them more automatic and make use of Prugna’s passing accuracy as well as of Empoli’s attacking players’ quick movements without the ball.

It is true that Prugna’s main role is to help in the build-up, cover in front of defence and provide key passes upfront when needed. Yet, Prugna can also be exploited in terms of goalscoring since modern midfielders are more and more relied upon in this aspect especially when they are skilful. Prugna’s xG is 0,24 but it could be much better if she focuses more on shooting and on improving her shooting abilities/skills. She often finds herself in a shooting or passing position inside the final third and therefore she has to diversify her options to confuse defenders and avoid being predictable. To apply this, she will need to train more on shooting while using her intelligence to determine when and from where to shoot and when to go for the key pass.

Prugna is a penalty specialist at Empoli and has already tried shooting from distance occasionally and proved that she has the potential of becoming a good shooter from distance, like she did in the following example against Juventus when she aimed for the shot but it hit the crossbar and went out. 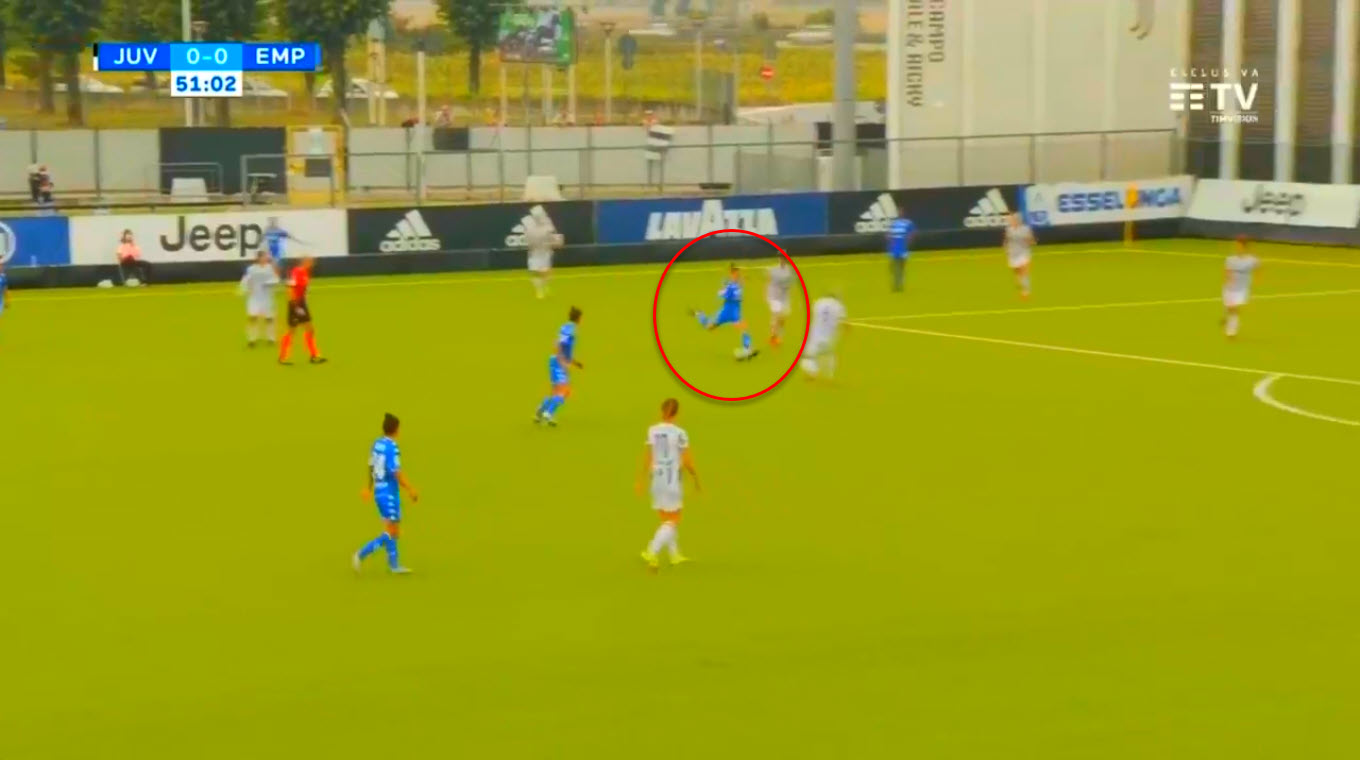 Moreover, she can also exploit her header abilities during free-kicks and corners since she has already scored goals using her head and showed that she can jump high despite being disturbed by defenders, like in this goal action. 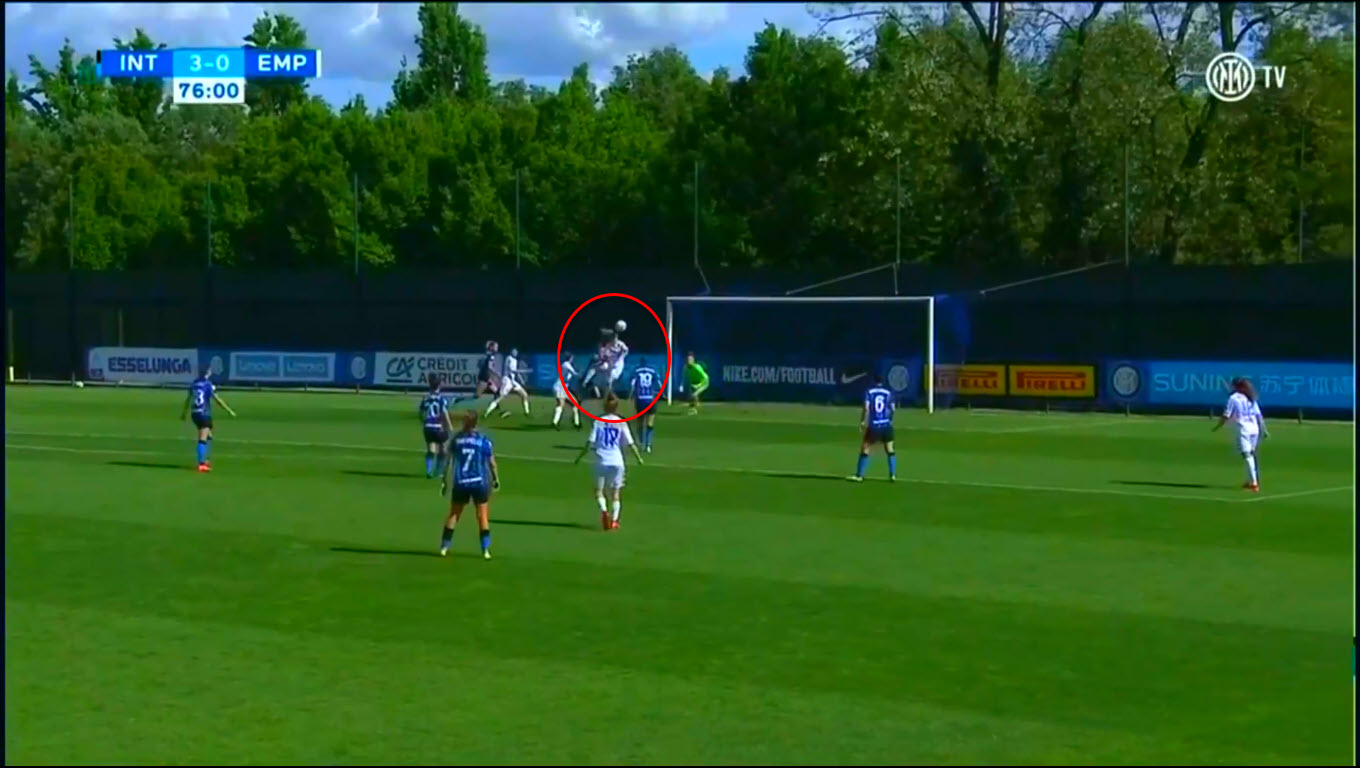 Cecilia Prugna has a bright future in front of her if she continues to focus on putting on excellent performances and keep providing key passes to her teammates. She will soon be under the radar of the “big” Italian teams such as Juventus, Milan, Roma, Sassuolo, Inter and Fiorentina and perhaps she will then get the opportunity to play abroad. Prugna needs to believe in her abilities and not be afraid or shy to show all her skills during games, because her potential allows her to put on even greater performances than her previous ones.