The two giants in Spain, Barcelona and Real Madrid were knocked out in the last stage of the Copa del Rey. Real Sociedad became the highest-ranked La Liga team in the competition, they drew Mirandes as their opponent in the semi-finals.

Mirandés were not an easy team, despite they were playing in the Segunda División. In their road to the semi-finals, they already kicked Celta Vigo, Sevilla and Villarreal out of the competition. In the first game of the cup tie, they left their home stadium, travelled to the Reale Arena to search for a positive outcome. After 90 minutes of intense battle, they merely lost 1-2 to the sixth of the first division.

In this tactical analysis, we will show you how Sociedad beat Mirandés. It is an analysis that focuses on tactics.

Imanol Alguacil’s team played in a 4-1-4-1 formation. The manager treated this competition seriously as he played his key players. Comparing to their 4-3 win against Madrid, he made some changes. Andoni Gorosabel was suspended, Joseba Zaldúa played as the right-back. Adnan Januzaj stayed on the bench as Portu started ahead of him.

Mirandés’s manager Andoni Iraola only made two changes according to the last game. They still played in a 4-2-3-1 formation, but Antonio Sánchez was pushed to the attacking midfield position. Mickaël Malsa partnered with Jon Guridi as the defensive midfielders. For the left-back position, Gorka Kijera returned to the team and replaced Enric Franquesa.

When playing at Anduva, we saw Mirandés pressed strategically and spent efforts to mark the central midfielders. However, Iraola adjusted his tactics a bit in this cup tie, despite still defending in a 4-2-2-2 shape, their team had an extra job to do: force the ball wide.

They did that by not pressing the goalkeeper initially. When Sociedad kept the ball centrally, the main task of the Mirandés front two were to keep the opponents’ sole pivot (Igor Zubeldia) under control. They would not press the keeper, as they wanted Alex Remiro to choose either one centre-back to pass.

As demonstrated below, Matheus Aias and Sánchez stayed at the centre, prevented Zubeldia from receiving a pass. 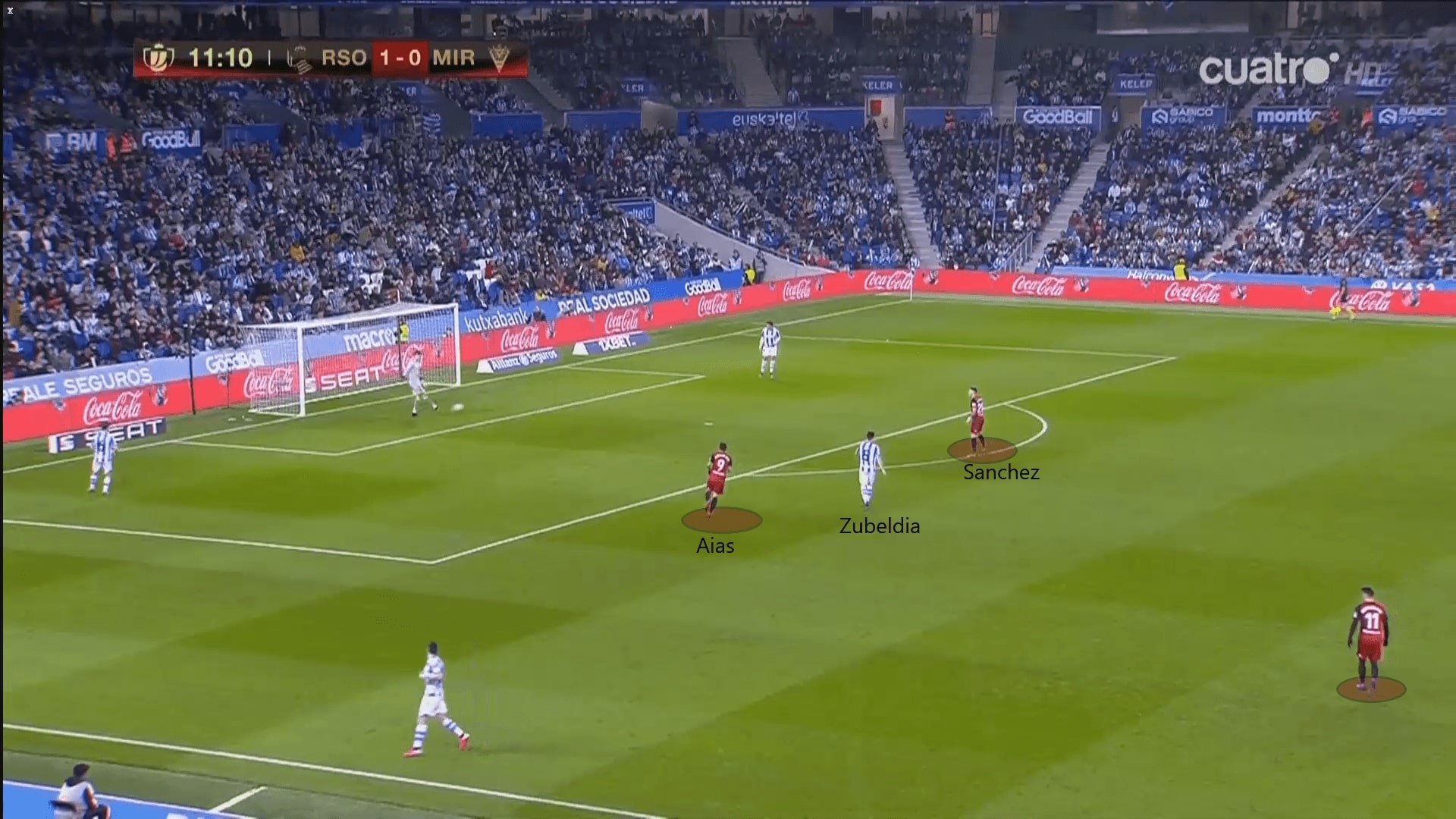 Remiro passed to the left centre-back (Robin Le Normand), it triggered the press. Mirandés players knew they were going to close that flank down and compressed the space around the left-back (Nacho Monreal).

On this occasion, they failed to regain possession high, as Monreal was an experienced player and he did not panic. He saw Zubeldia was marked, calmly returned the ball to Le Normand. However, this example showed how the build-up of Sociedad was disrupted by the press. 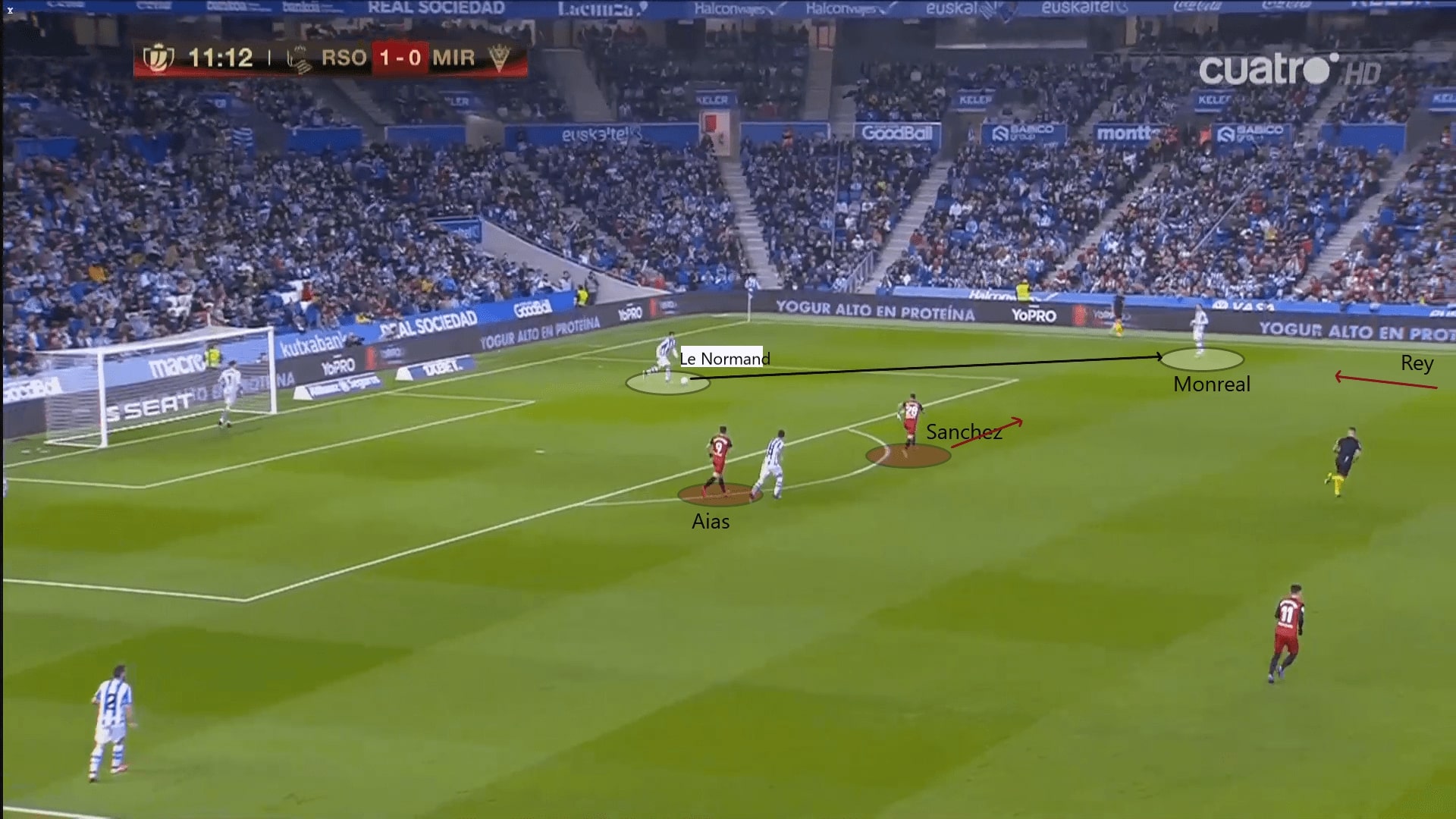 Another key component of their defence was the position of the left-winger, Martín Merquelanz. When setting a block, the top scorer of Mirandés stayed at the half-spaces, which created the following benefits.

Since Merquelanz occupied the half-spaces, increased number of red shirts at the centre of the pitch, he shut the passing lanes at the centre. In case Sociedad moved the ball between the centre-backs, the left-winger was also closer to intercept any poor pass.

Mirandés were prepared to attack the flanks, especially on the left. They were pleased to see the right-back (Joseba Zaldua) to stay in an advanced position. As a result, they could exploit the spaces behind Zaldua. The positioning of Merquelanz gave a signal to the right-back that he was unmarked, therefore, he thought he could go forward safely.

As reflected in the image, Zaldua raised his hand, asked for the ball while staying at an advanced position on the pitch. 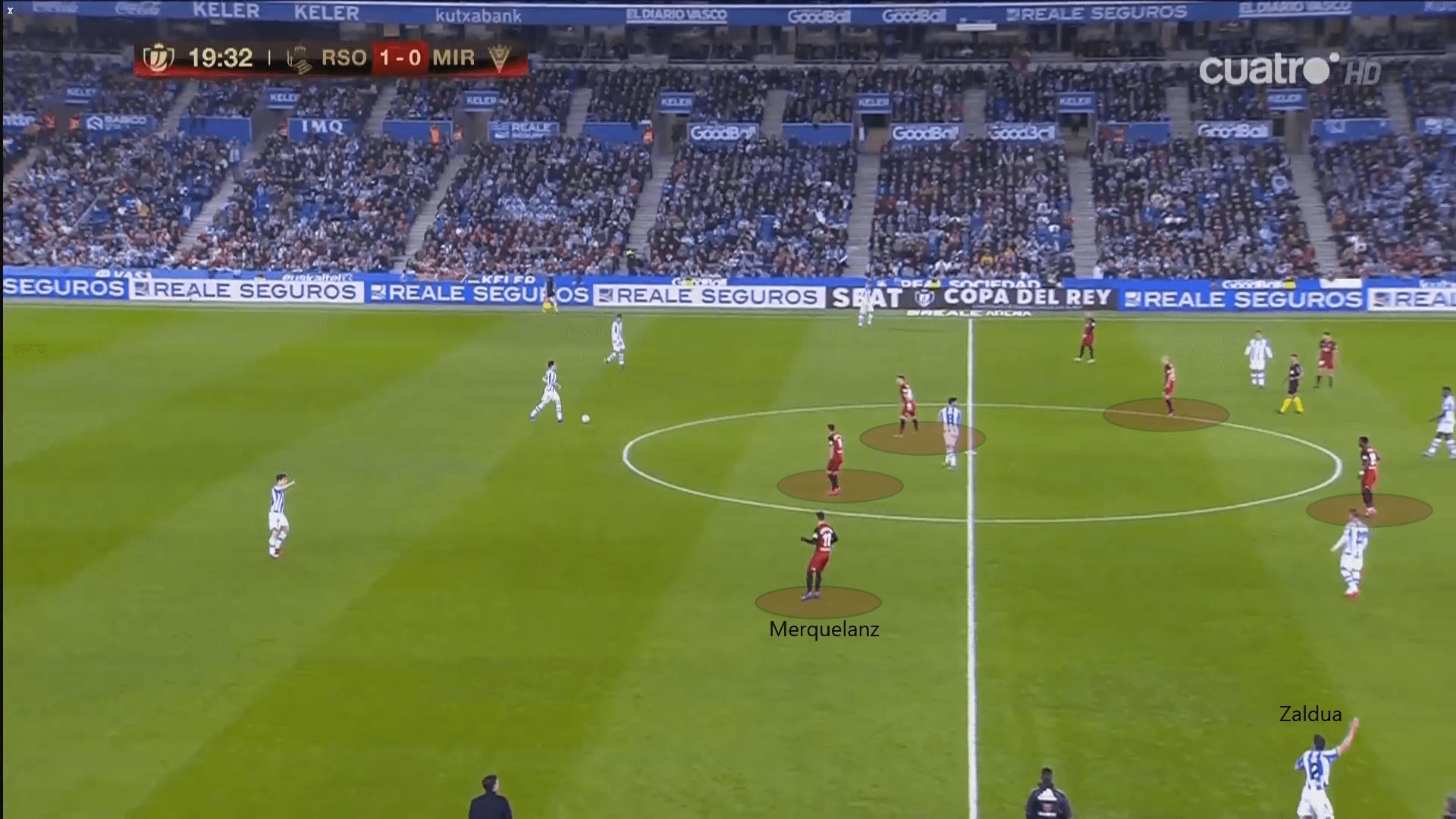 If Sociedad dared to make a vertical pass at the centre, it would be predictable for the defensive midfielders of Mirandés as the passing length was large (as a closer option, Zubeldia was unavailable). They could have time to press and intercept the pass before it reached the target.

On numerous occasions, Sociedad were caught when playing this type of pass, especially in the first half. This was also the starting point of their equalizer, as illustrated in the below image. Aritz Elustondo tried to find Martin Ödegaard. However, Malsa anticipated the pass and intercepted the ball with his full speed. 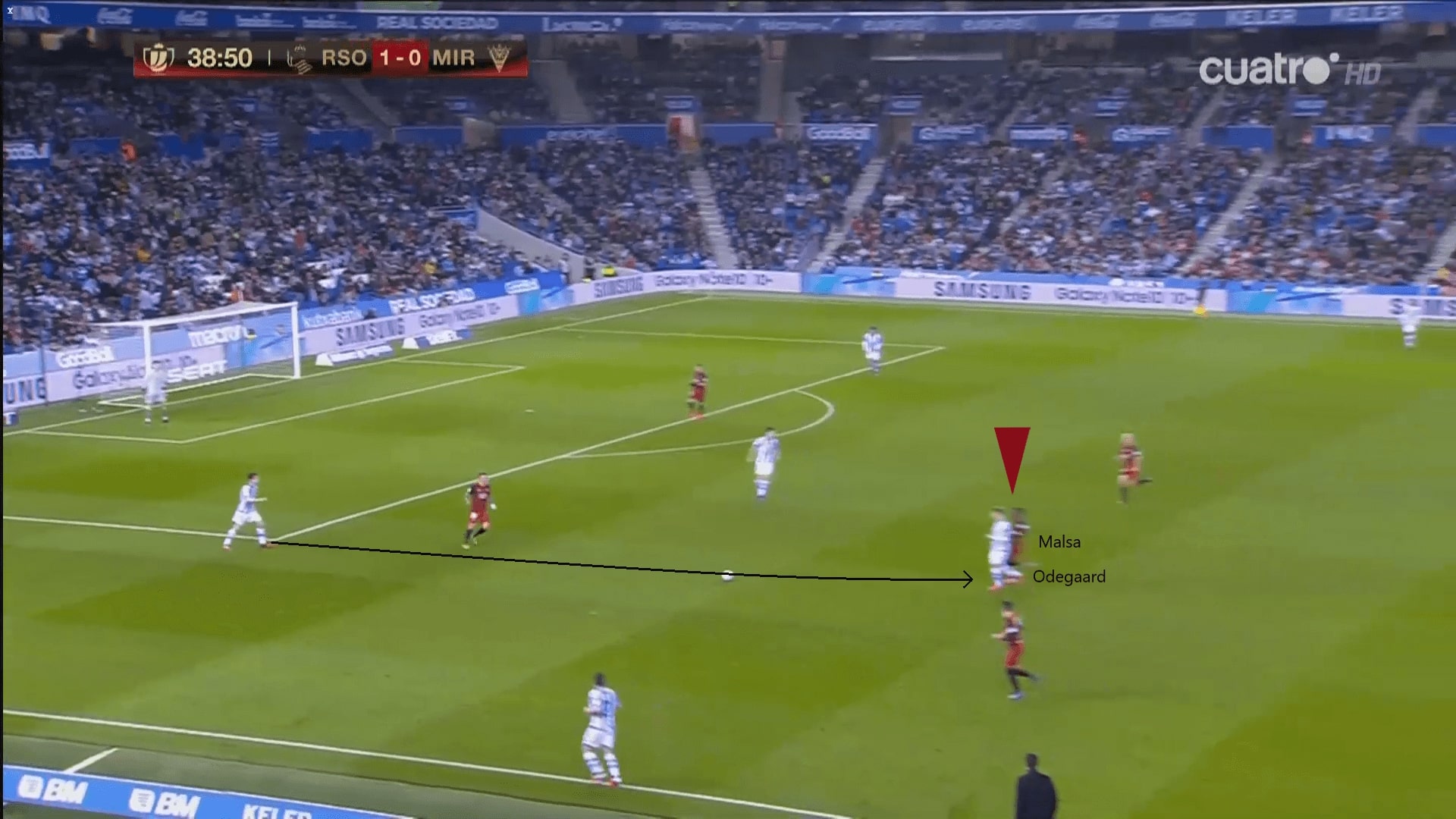 Sociedad played out from the back

Despite being pressed, Sociedad still insisted on playing out from the back. Given the features of the players, they could adjust their positions flexibly in the first phase of the attack. In general, there were two forms of build-up. They insisted to move the ball on the ground as they wished to attract the pressure, create more spaces for the front three behind the pressing players.

On occasions, Zubeldia dropped between the centre-backs. By staying in a deeper position, this could help the pivot to get rid of his marker and created spaces for himself to receive the ball. As shown in the below image, he formed a back three with the centre-backs, allowing Le Normand and Elustondo to access the half-spaces. They could either carry the ball or pass vertically to progress.

In this case, the shape of Sociedad would look like a 3-4-3, as both full-backs (Monreal and Zaldua) moved to an advanced position to stretch the pitch. 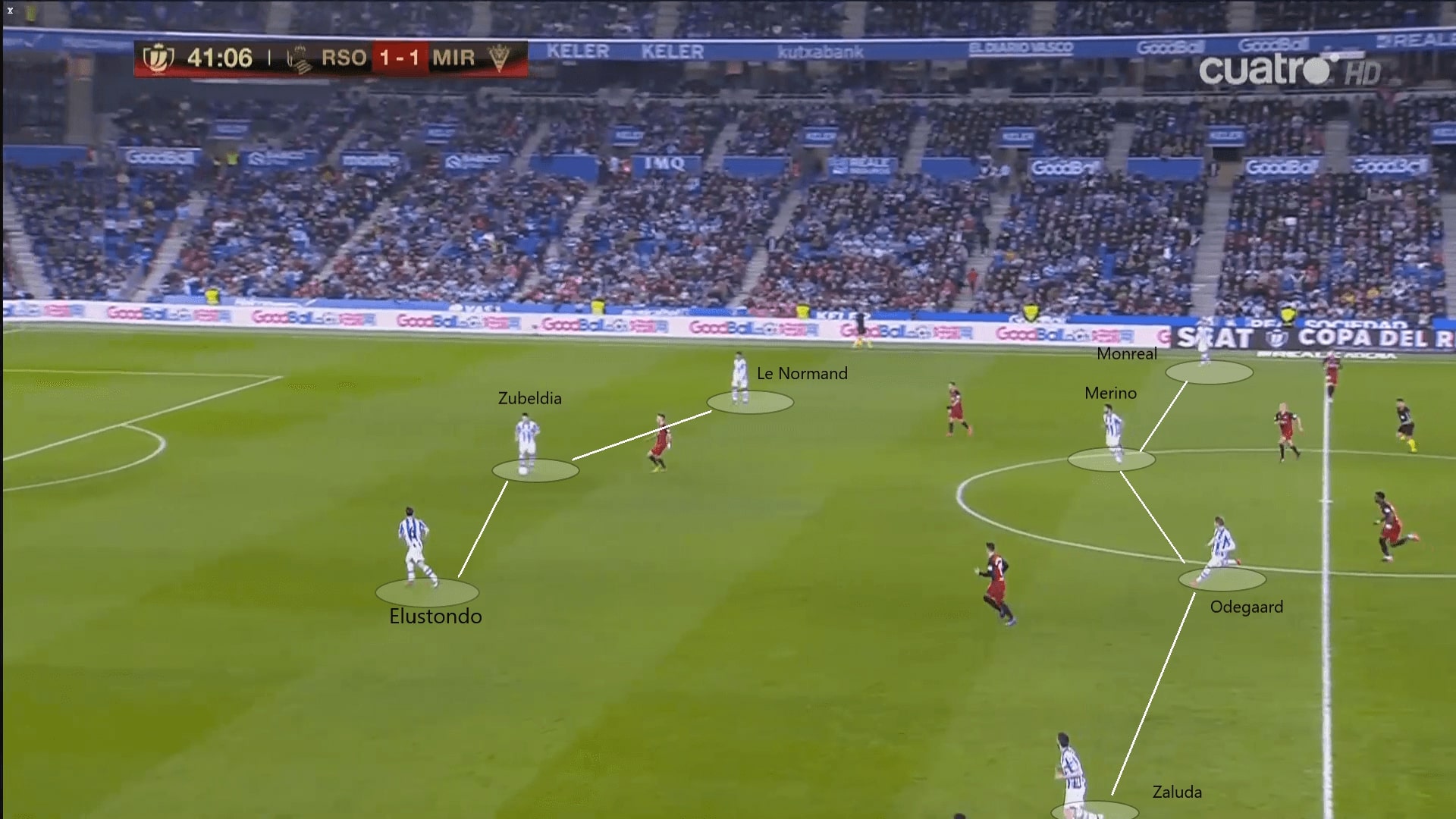 2. The pivot formed a passing triangle with the centre-backs

On other occasions, Zubeldia did not drop between the centre-backs, he stayed behind the first line of Mirandés defence. This had several benefits, first, he more spaces for the centre-backs to receive the ball, as Zubeldia was the marked target initially.  In these situations, the shape of Sociedad would look like a 2-3-2-3. The unchanged element was the positionings of the full-backs, they continued to provide the width on both sides.

As shown in the below image, the right-back could create a two v one numerical superiority against the left-winger. 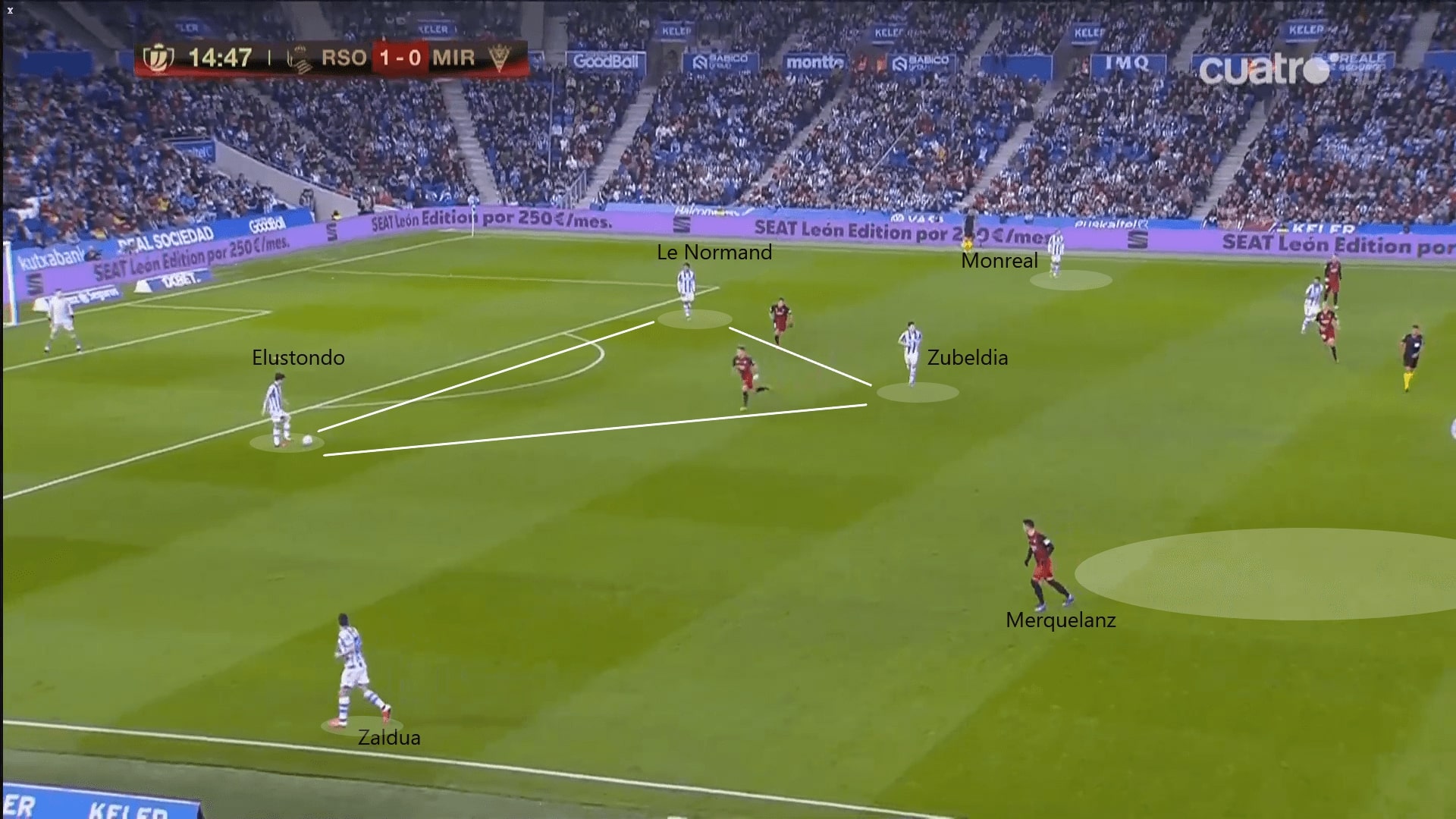 Also, when Zubeldia stayed behind of Aias and Sánchez, it facilitated the third-man plays of Sociedad effectively. As Mikel Merino and Ödegaard positioned themselves at the half-spaces, constantly dropping to receive the ball, even though the pivot was unavailable initially, the centre-backs still have a vertical passing option.

In the below situation, Ödegaard received the pass, this time, Malsa was far from reaching the ball but he left his position. The Norwegian immediately passed to Zubeldia, who also made a first-time pass given his wide available of angle to pass.

The idea was right, though sometimes the execution let Sociedad down, as Portu was unaware for this pass and Sociedad loss the ball. 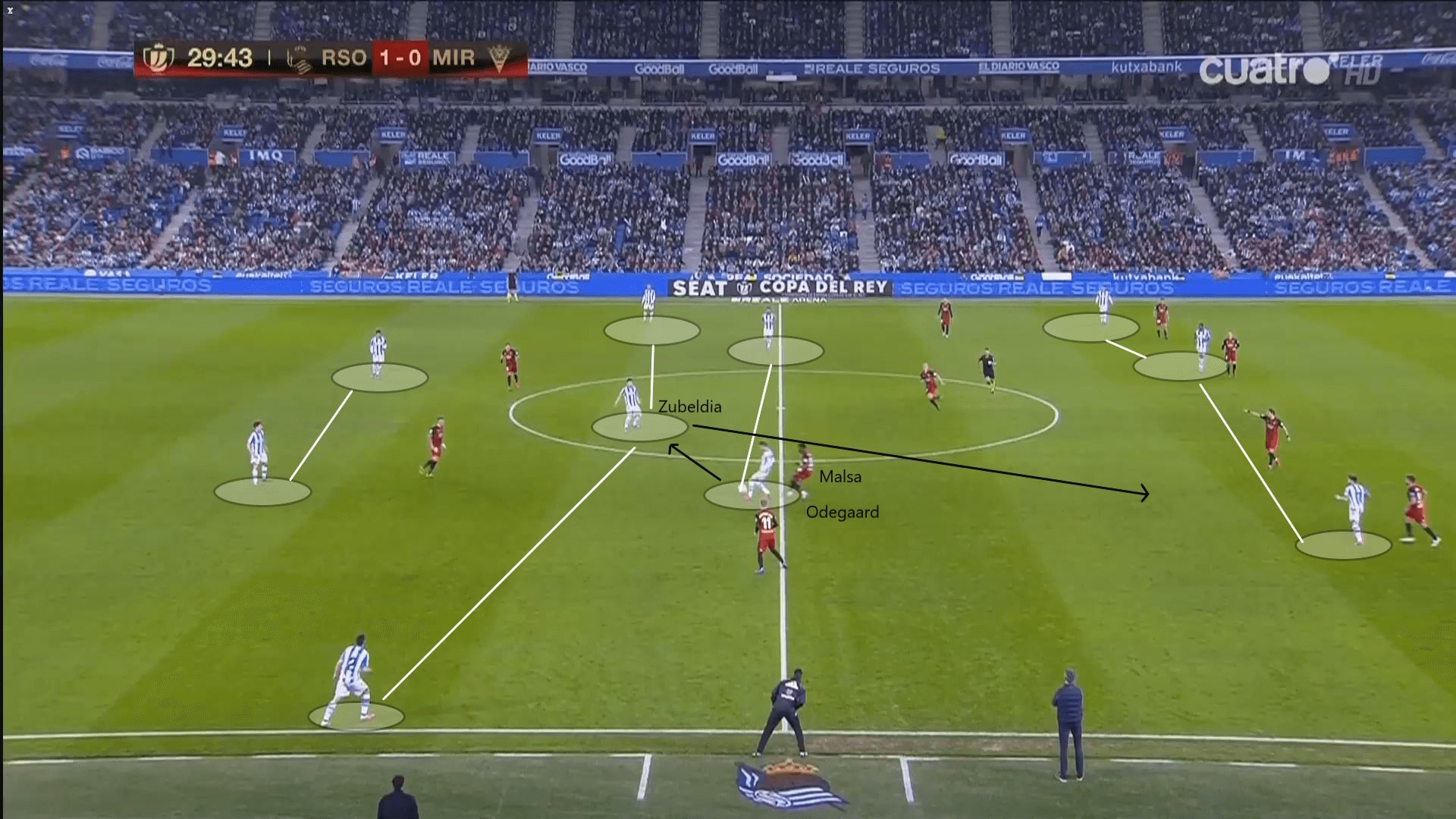 Another outlet of Sociedad’s attack was the dropping movements of the centre-forwards. They appeared at the centre, showing up as a ‘false-9’ which allowed them to receive the vertical passes. The midfielders (Zubeldia, Merino and Ödegaard) all possessed the ability to break the lines, hence, Sociedad kept the front three high and look for this pass for a fast break.

In this example, Zubeldia penetrated between players and found Alexander Isak. On most occasions, the Swedish would neatly pass the ball with his first touch. However, if given room, he could also turn. He took the right-centre back (Odei Onaindia) with him, destructed the defensive shape of Mirandés.

Also, with the high positionings of the wingers, Mikel Oyarzabal and Portu had the one v one chances. After Isak rounded Onaindia, he found the no.10 of his team, who was isolated against Alexander González and provided a cross that resulted in a shot. 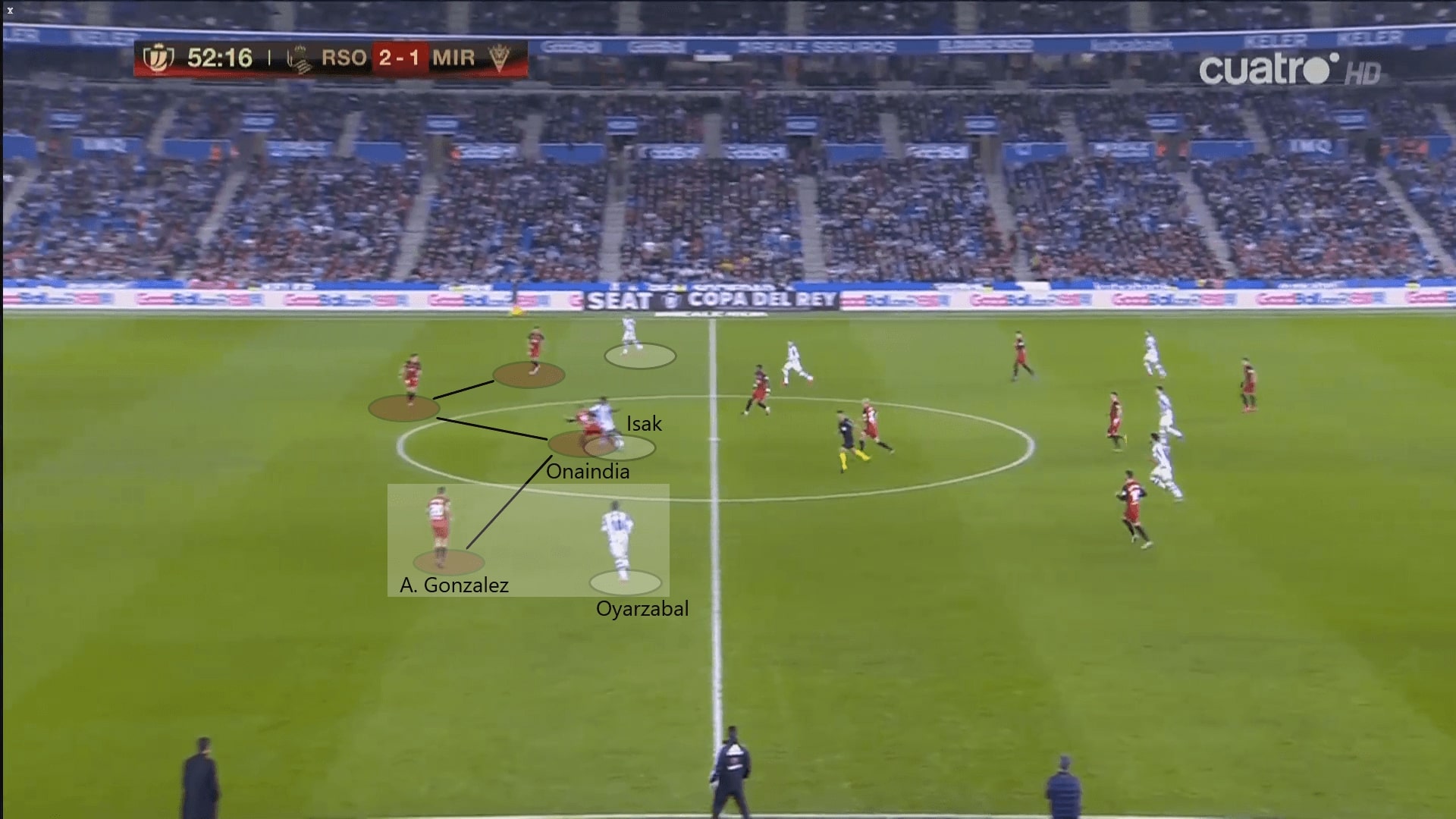 Isak was replaced by Willian José at the 67th minute, but their jobs were similar in this game. This was another example of the use of ‘false-9’, which they could quickly pass with their first touch to release the winger.

In this situation, José identified the spaces behind the pivots and called for a pass there. Then, he quickly turned passed to Portu, but it seemed the right-winger was not quite ready to receive these passes in this match. 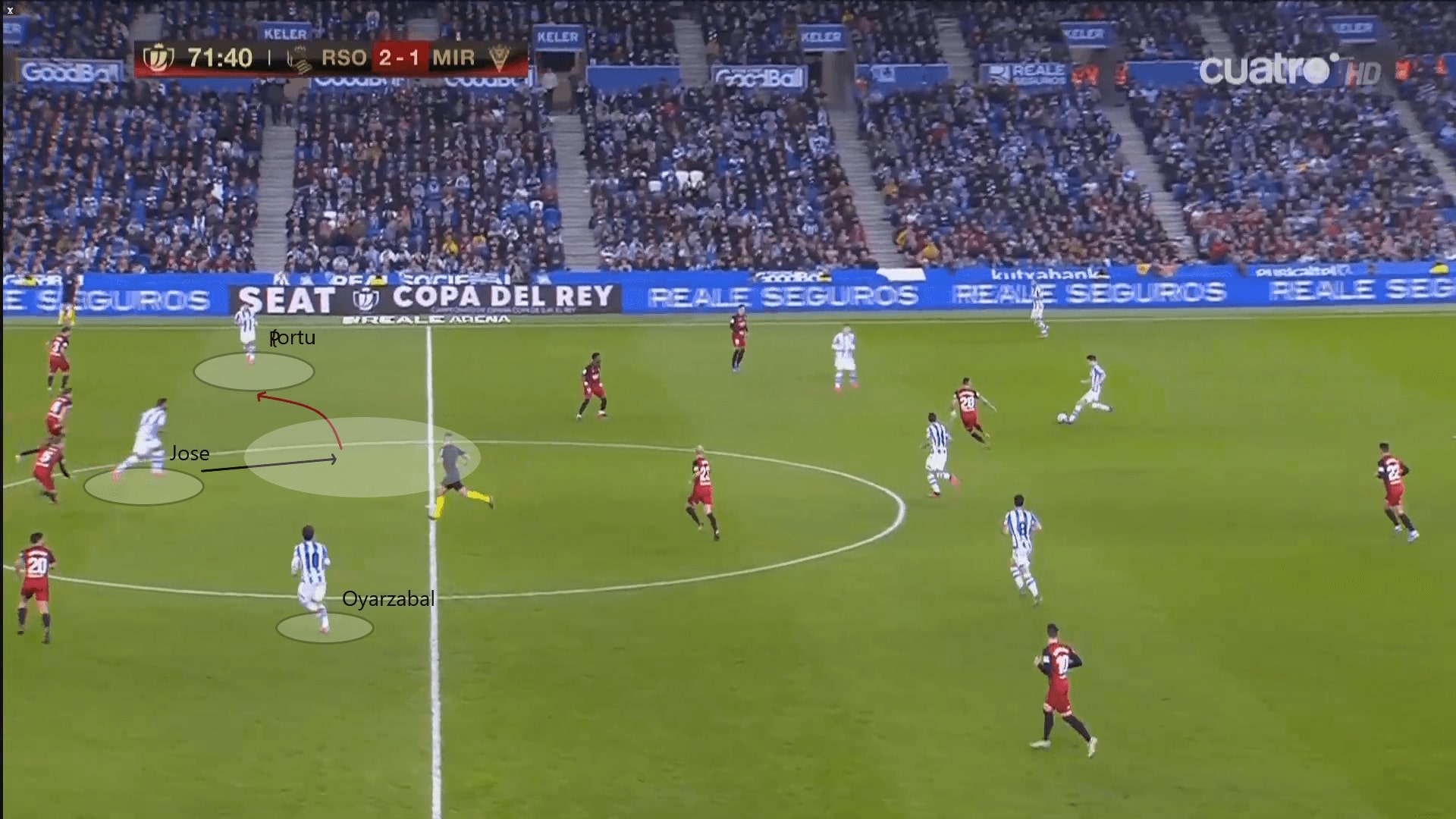 Mirandés continued their attacking style, enjoying attacking flanks in the transitions. They utilized the spaces in the wide areas generated by the narrow defensive line of Sociedad. Usually, the full-backs stayed centrally as Sociedad only had a sole pivot protecting the defenders, they had to reduce the spaces between the defenders.

In this case, Merquelanz’s inward movement further drew the right-back (Zaldua) with him. He created tremendous spaces on the left flank for the skipper, Kijera to exploit. Malsa passed cleverly in this case, he ignored the clearly visible option (Merquelanz) and released Kijera on the flank. 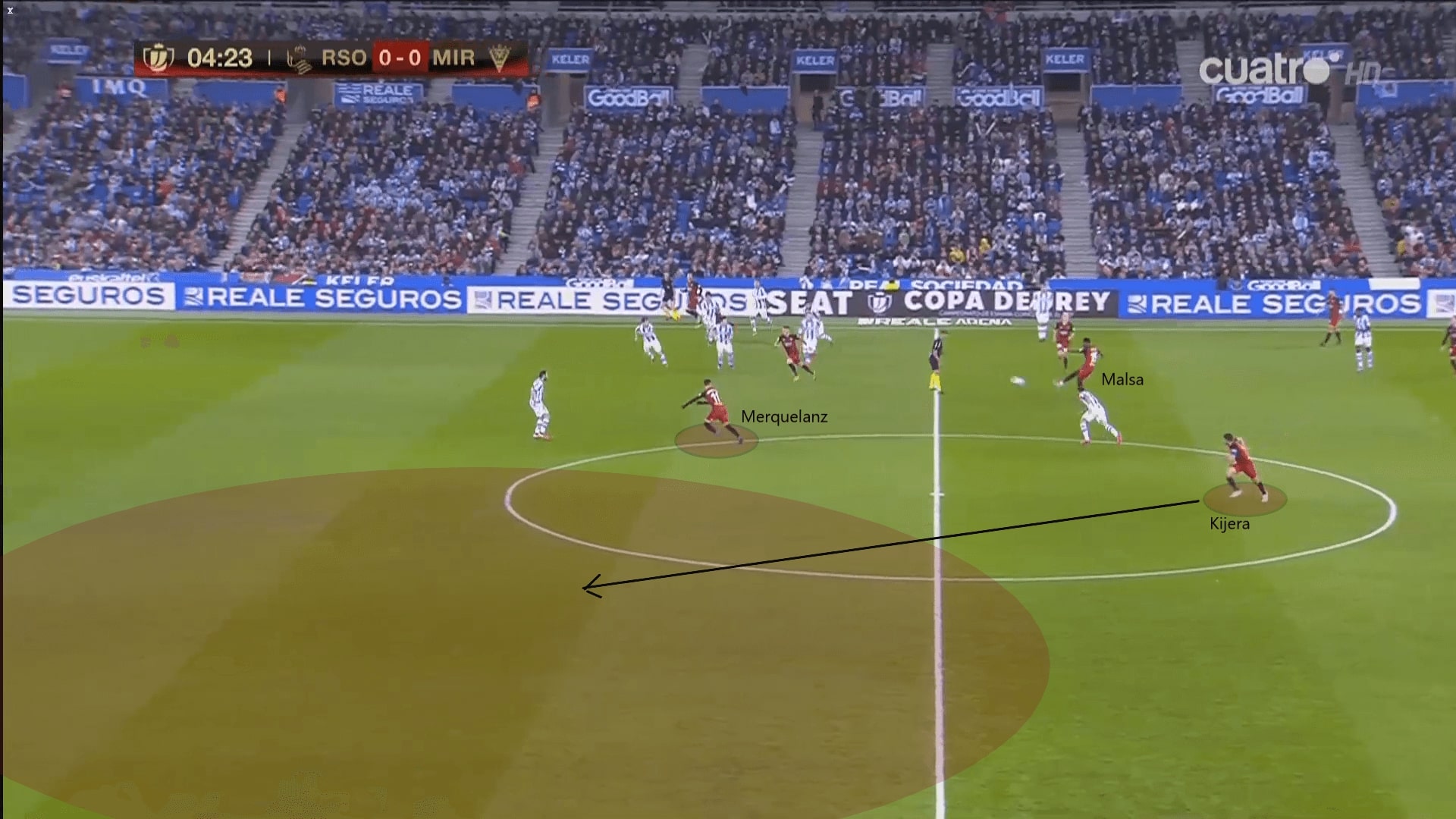 When attacking in the transitions, it was important for Mirandés that to maintain the width. This could stretch the defensive line and create more spaces for one v one dribbles. Also, as mentioned, they were good at utilizing the spaces behind full-backs in the transitions.

In this image, we saw both Aias and Merquelanz were running on the flanks, staying wide while Sánchez was carrying the ball, Given the advanced positions of the full-backs in the attack, Mirandés enjoyed huge spaces behind them in the counter-attacks. 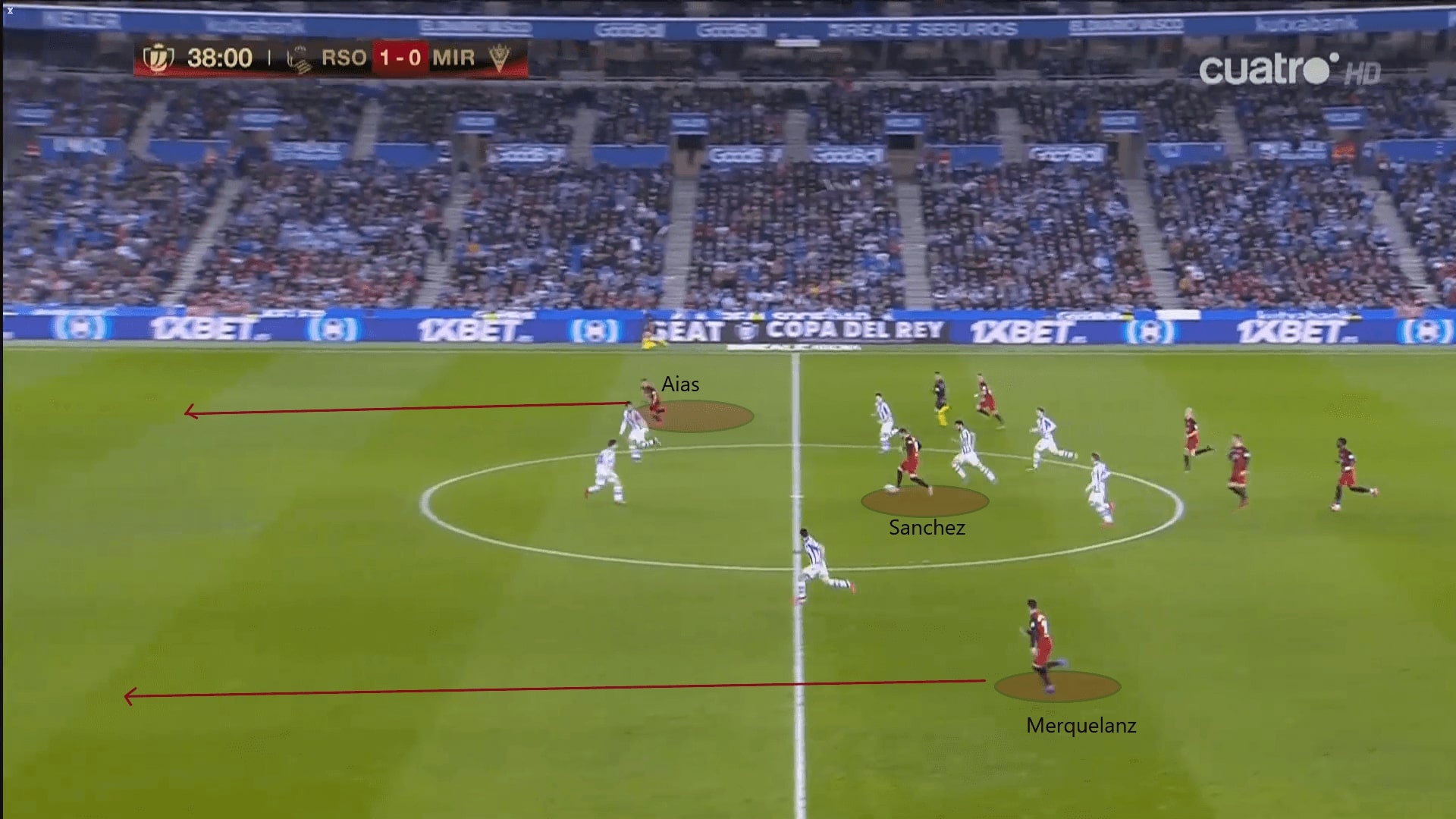 Even in the positional attacks, Mirandés had a good mindset of playing behind the full-backs. As demonstrated in this image, with the diagonal run of Sánchez, they created a two v one against the right-back on the flank.

In the first half, Mirandés relied on the individual abilities to distribute the ball at the centre, In this attack, it was Guridi to win the duel and played the ball to Merquelanz. In the second half, they attacked in a slightly more direct approach, however, it was ineffective as Sociedad set an offside trap to deny the long balls behind the defenders. 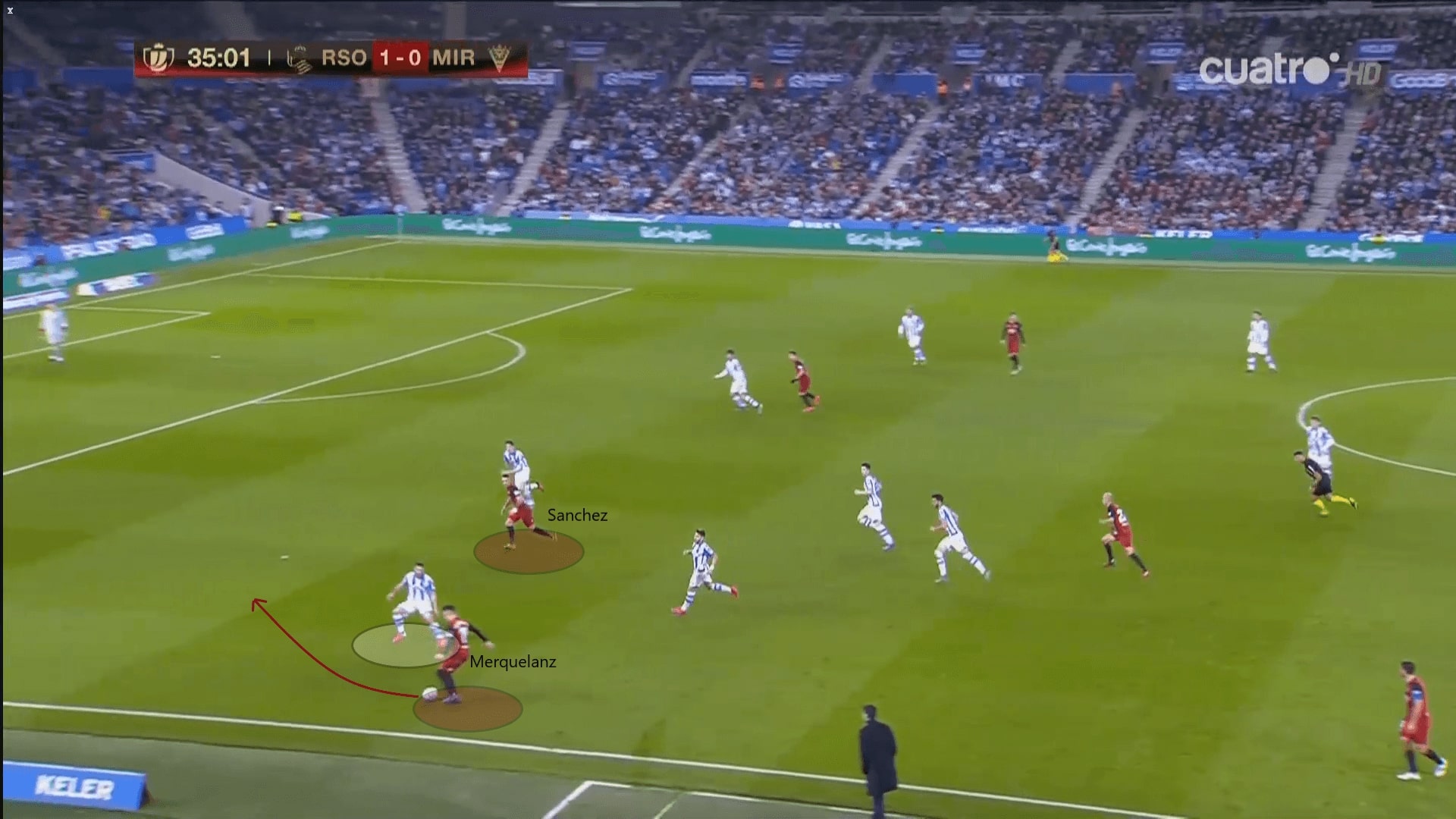 Sociedad had a decent game in terms of the attack, they created four chances valued over 0.3 xG, however, Portu wasted two and the result was two-one, the cup tie is still on at the Anduva. Alguacil’s team was well prepared for this match, avoided many mistakes of the teams which knocked out by Mirandés in this competition.

For Mirandés, this game they struggled to create huge chances despite accessing the spaces behind full-backs. After 90 minutes, there 0.44 xG was unimpressive at all. We think they were bringing a more intense game in the second leg, as they desperately needed a goal, it would be intriguing to see whether they could force the Sociedad players to make some mistakes under pressure. They still had the chances to enter the final.