Matchday 15 of the FAWSL brought us an exciting clash between current midtable and high-table hopefuls Tottenham Women and Everton Women. Both teams strive to separate themselves from the pack and join the upper-tier of competition with the likes of Arsenal, Chelsea and Manchester City.

After analysis, we see that Tottenham brought complex attacking tactics to win the day, but were forced to adjust at half time. Everton brought an intense press that sought to wreak havoc in the Tottenham defensive third. Would either team be able to take the first steps towards moving into the top 4? This tactical analysis will look at exactly how it happened. 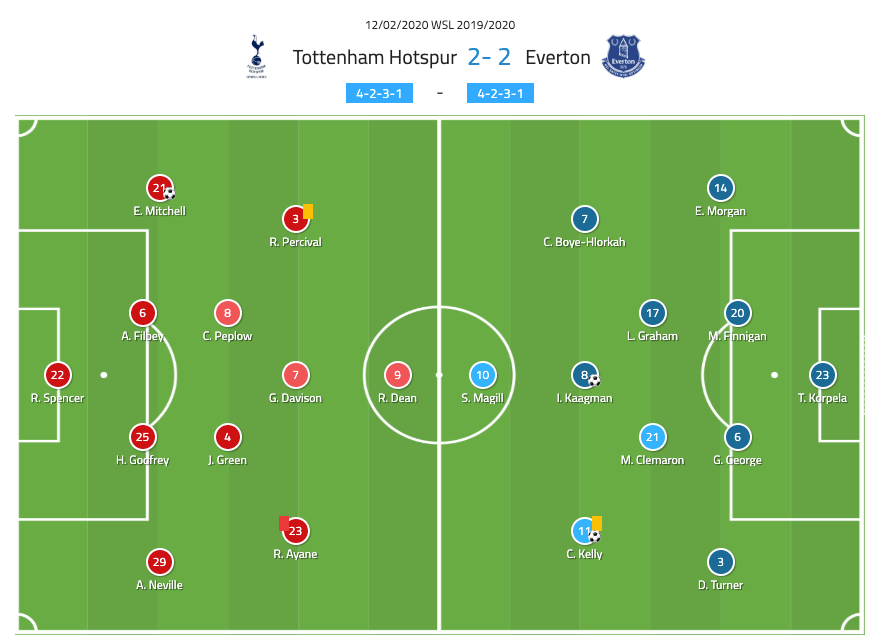 Tottenham: play up the left flank

Tottenham’s initial primary attacking tactic was to build out of the back and progress through the left flank to the attacking third of the pitch. This was done through the use of an organized positional structure that was paired with multiple player rotations.

When the Tottenham centre-backs were in possession, the attacking tactic went into effect. Initially, Tottenham aligned in a double pivot of two central defensive midfielders (Josie Green and Chloe Peplow). From here, Green would shift wide into the left-back position.

As Green shifted, Peplow would move into a central singular pivot role while far-side right-back Ashleigh Neville shifted to the right halfspace to provide central cover.

As all of this occurred, left-back Emma Mitchell pushed high up the left flank towards the offside line. Mitchell is primarily a defender but has been known to also play forward. In opposing movement to Mitchell, left-wing Ria Percival dropped in the left halfspace to form the top of a diamond with both central midfielders and centre-back.

Further up the pitch, striker Rianna Dean, dropped into space behind the Everton midfield line. This movement either left Dean open to receive between the lines or dragged a central Everton out of her position.

As Dean dropped, right-wing Rosella Ayane, pushed high into the striker position. This kept any central defenders pinned in the central channel and maintained an attacking threat for any balls delivered behind the Everton defensive line.

Central attacking midfielder Gemma Davison was given license to ether find space between the Everton midfield and defensive line or push high into the offside line.

This is obviously fairly complicated and if executed correctly would be difficult to defend against. Tottenham attempted this tactic multiple times throughout the first half and we saw a near successful passage of play in the fortieth minute.

Below, we see that Spurs centre-back Anna Filbey has gained possession and is dribbling forward. Moments before, Green has shifted out wide as Mitchell pushed upfield into an attacking position.

Peplow has drifted over as a central passing option and Percival has dropped to create a situational diamond around the Everton midfield line. Simultaneously, Dean has dropped from her high attacking position and dragged any nearby Everton midfielders with her. 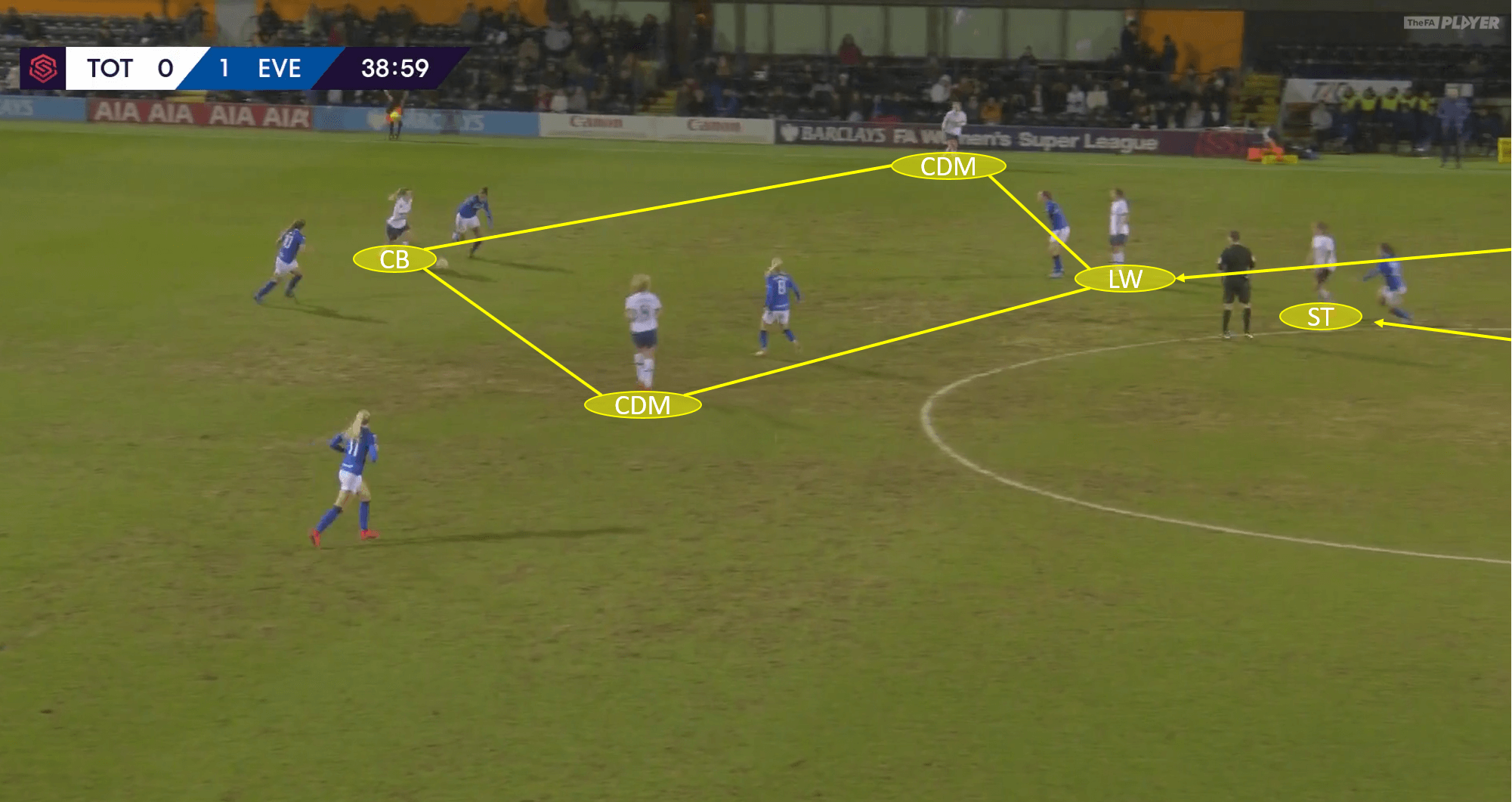 Filbey moves the ball to Green, who is the lone unmarked player within the diamond. As Green receives, Davison is finding space between the lines upfield. Green shifts the ball to the feet of Davison and then immediately moves upfield to join in the attack.

Davison, who received with her back to the goal and is being pressured by a central defender, is aware that Ayane is now in the striker position and Mitchell is ready to attack space behind the Everton line as well. Davison turns and sends a through ball behind to a sprinting Ayane. 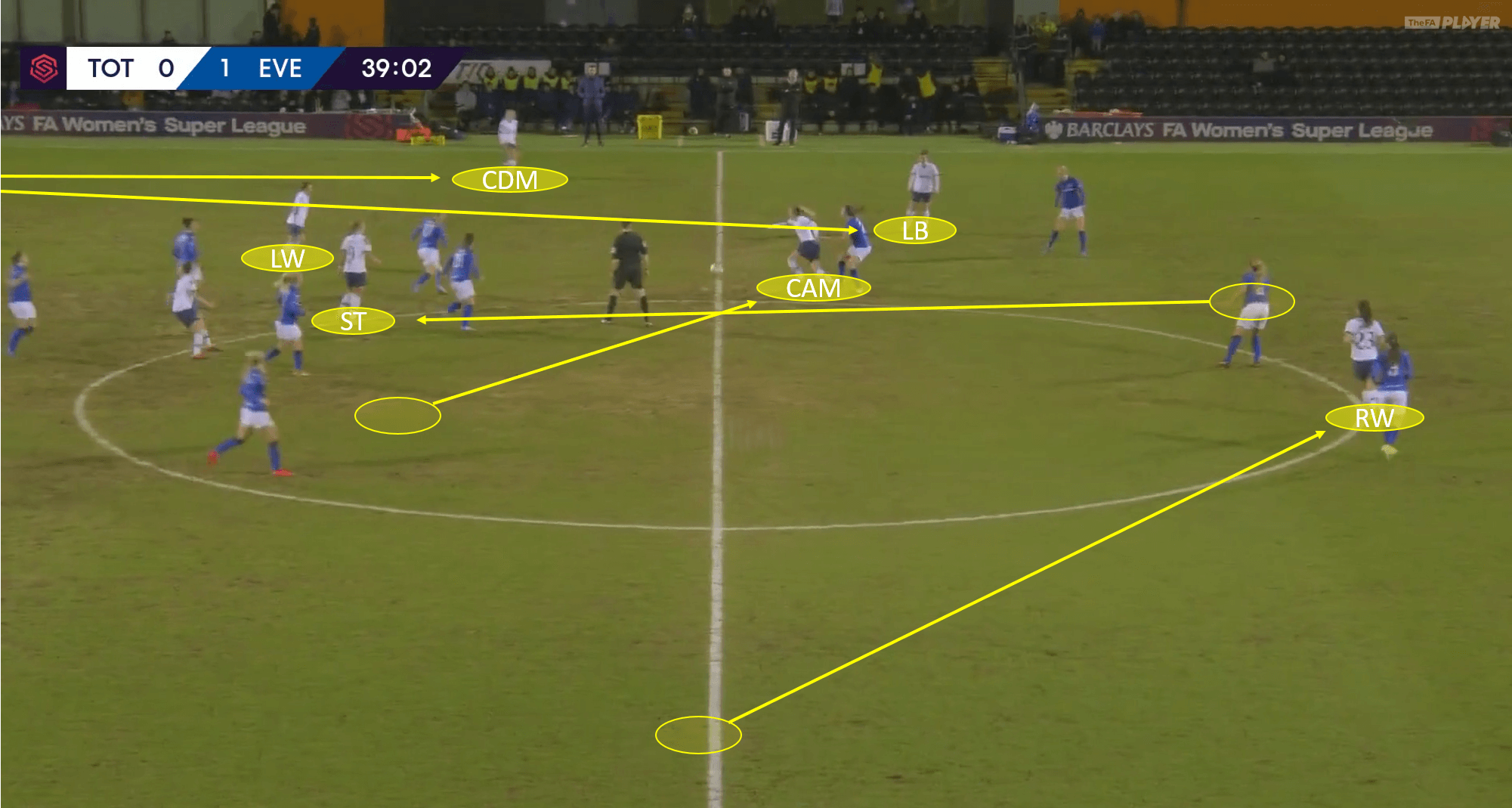 Ayane now has the ball in dangerous space in the attacking third of the pitch. She sprints forward into the Everton box. While sprinting, she pushes back the Everton defensive line and creates space centrally for an advancing Dean. This gives Ayane the two options of shooting or performing a cutback pass into the path of Dean. 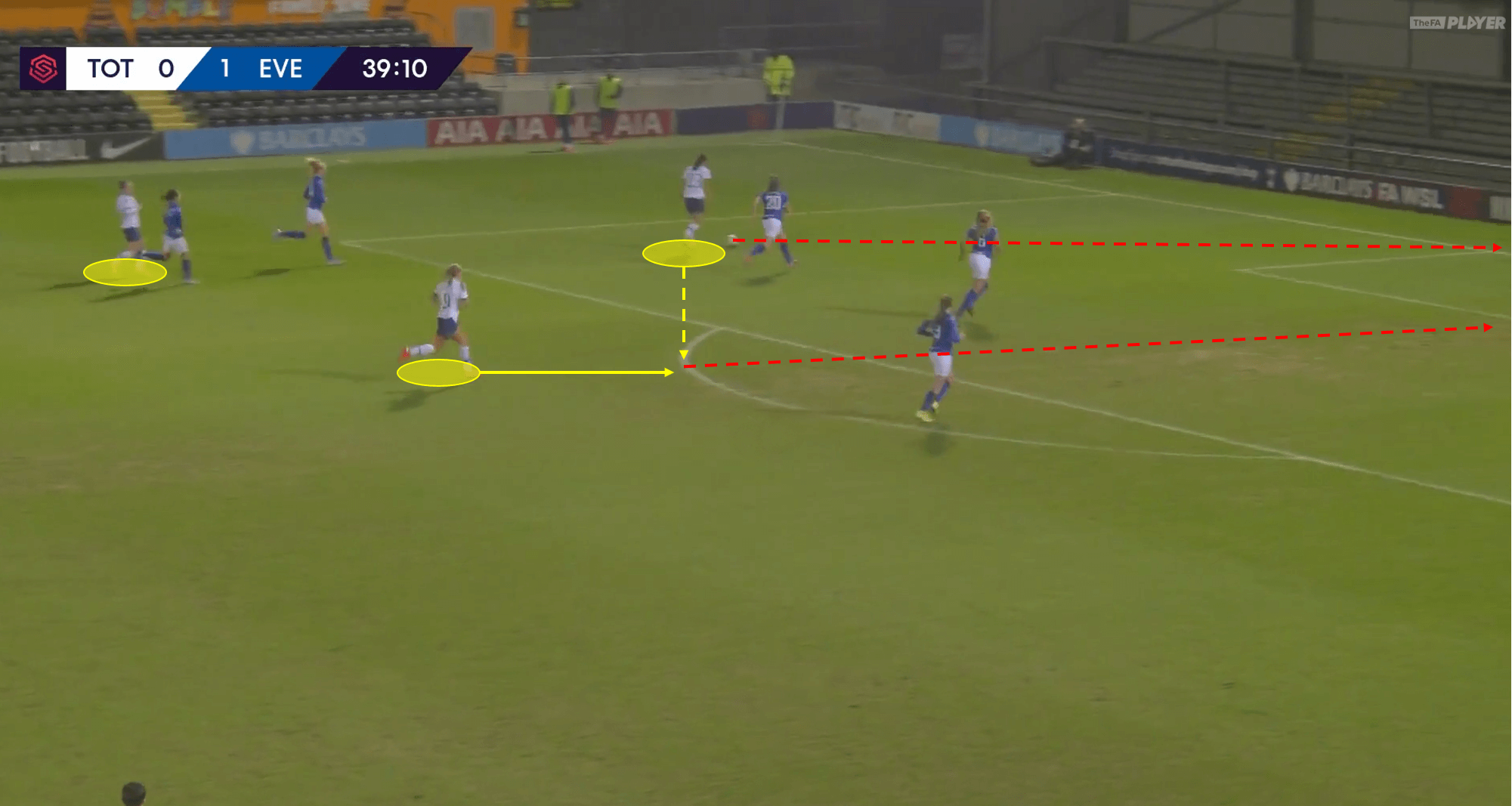 In this example, Ayane chooses to take a shot and misses wide.

Tottenham allocated this attacking tactic throughout the first half of the game and had little success. One could feel that there were many moments when Tottenham were quite close to having a breakthrough. This was made difficult by Everton’s aggression when out of possession, which leads us to…

Everton’s tactical game plan focused around pressuring and disrupting Tottenham’s building out of the back tactics. By disrupting the build-up, Everton would ideally gain possession in the attacking third against a spread out Tottenham team shape and quickly move to central space to score.

Everton pushed high in a 4-2-3-1 that focused on player-to-player marking. As all forward and midfield players pushed up pitch and marked their relevant Tottenham personnel, the centre-forward Simone Magill would pressure the goalkeeper or centre-back with the intention of forcing play wide. This was done through curved runs that created pressure on the ball carrier while also creating a cover shadow to eliminate passing options behind her.

This out of possession tactic proved to be quite effective.

Below we can see that from very early in the match, Everton were aggressively pushing up the pitch. As the Everton players moved forward to mark out a nearby Tottenham player, Magill pressures Tottenham goalkeeper Rebecca Spencer. Magill arches her run so that any nearby passing options to the right side of the pitch are eliminated.

Spencer is forced to play to Tottenham right centre-back Hanna Godfrey. In this moment, Godfrey is already being closed down and all of her nearby passing options are tightly marked by Everton players. We can see that Magill continues her arched run to maintain pressure as well as eliminate back and horizontal escape passes to Spencer and Filbey through her cover shadow. 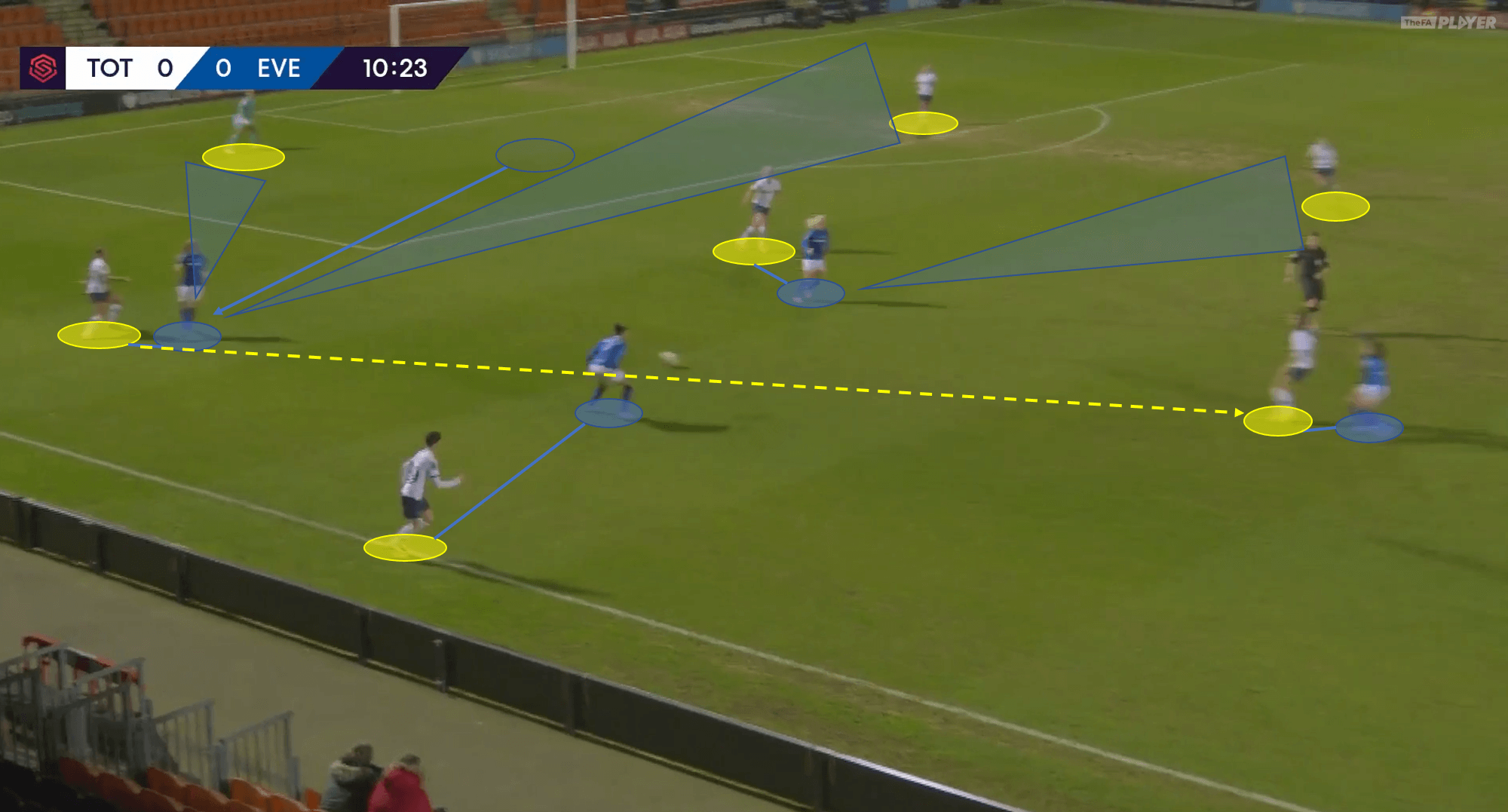 Godfrey attempts to play the ball to a dropping Ayane, but the ball is quickly lost. Everton gain possession and immediately take advantage of Tottenham’s compactless team shape. This leads to an Everton chance on goal.

Later in the match, Everton’s high press led directly to a goal. In a very similar situation, Magill has pressured Tottenham into playing to Godfrey. Godfrey then plays to a dropping Green, who is tightly marked from behind. Green, with no room to turn up the pitch and no safe horizontal passing options, chooses the conservative option and plays back to the goalkeeper. 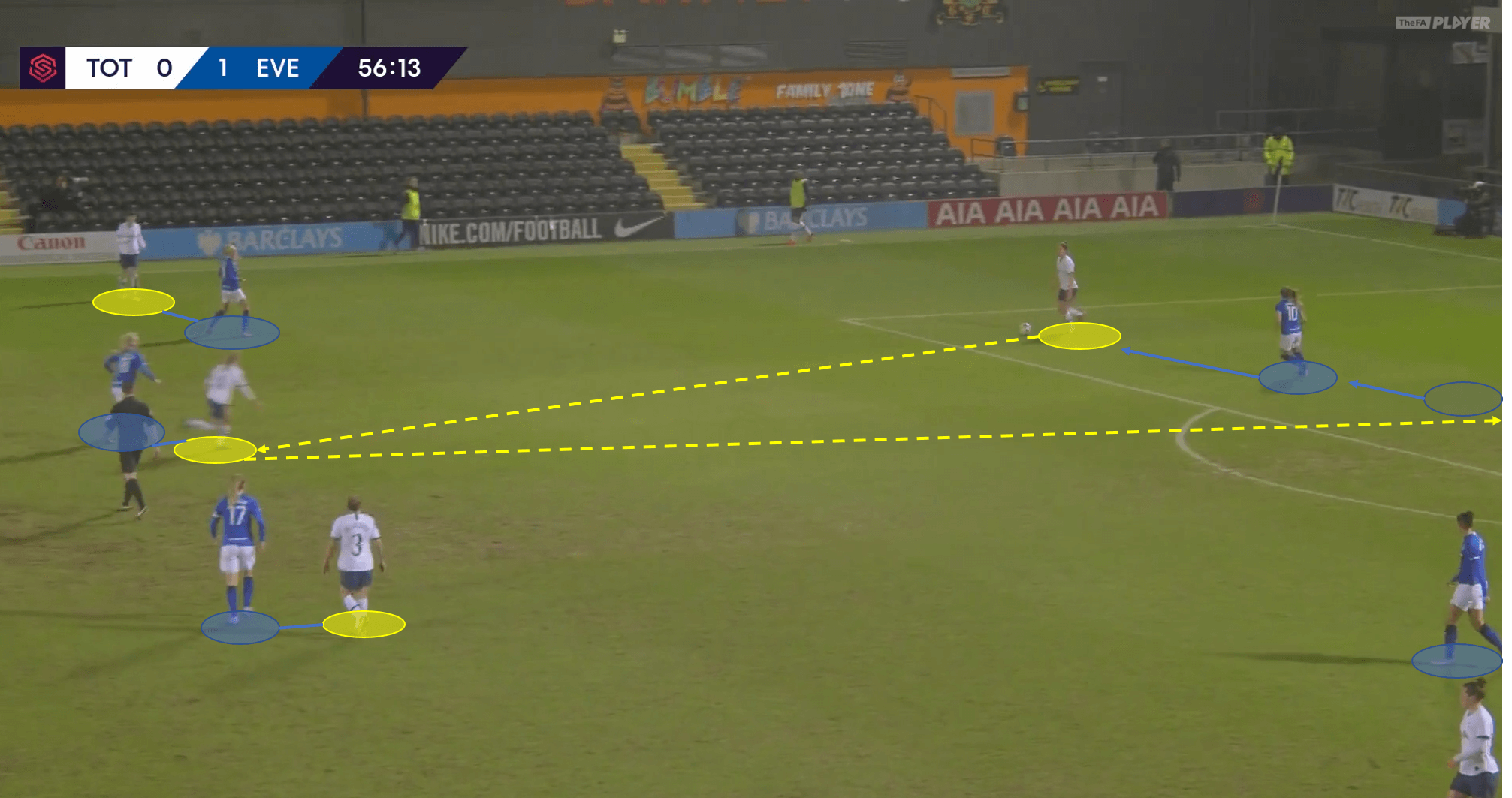 In this moment, the Everton unit pushes forward and the nearest Everton attacker (Chloe Kelly) aggressively pressure the goalkeeper. Spencer is pressured into a sloppy aerial pass to the Everton right flank. 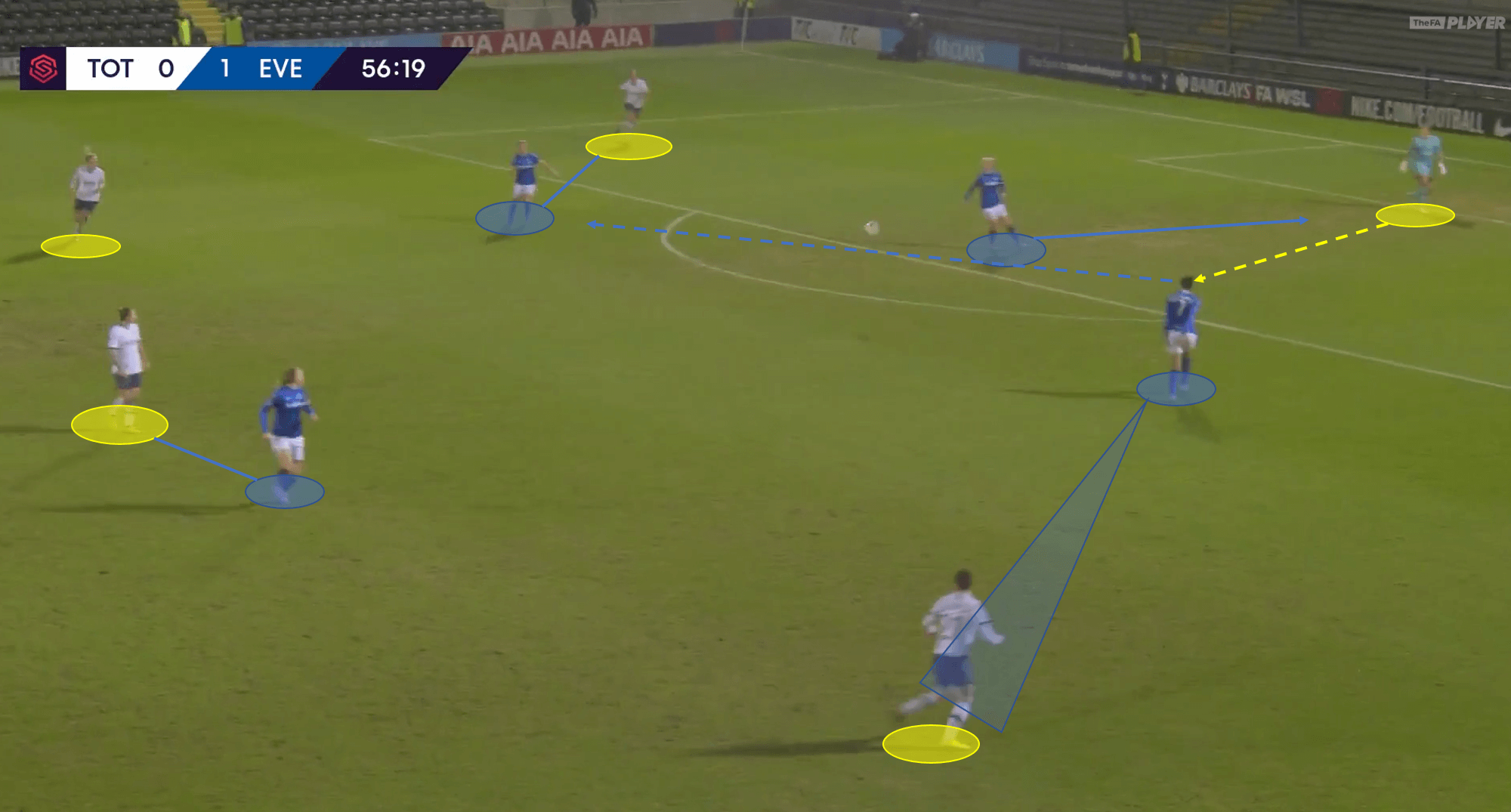 The pass is intercepted by Everton right-winger Chantelle Boye-Hlorkah, who heads the ball directly to the feet of Magill. This leaves three of Everton’s attackers in the centre of the pitch with no nearby Tottenham defenders to stop them.

Everton effectively used an aggressive press to maintain a high level of pressure on the Tottenham attacking unit. Tottenham had multiple passages of possession that saw Everton pressure lead to mistakes with the ball and dispossession. Many of these mistakes led to chances on goal for Everton.

At halftime, Tottenham entered the locker room down 0-1. Manager Karen Hills saw that playing out of the back was a potential way to create goals, but at the moment, was the source of many of their problems. Hills made a halftime substitution. She took out central defensive midfielder Peplow and introduced twenty-one-year-old forward Angela Addison. Addison was moved to the left-wing position, while Percival dropped into Peplow’s former central midfielder position.

This personnel change was paired with a change in attacking tactics and mentality. The entire first half the Everton backline was able to push high and create pressure, due to a lack of viable attacking runs behind by Tottenham forwards. This changed immediately as the second half began.

Instead of playing through the Everton high press, Spurs sought to allocate direct balls behind into space to take advantage of space left behind the Everton backline. Addison was used constantly to create danger behind in tandem with Dean.

This forced the Everton line to concentrate on both what was in front of them and what was behind them. Over time we saw that the threat of attacking runs and passes behind helped to create space to play in between the Everton midfield and defensive lines.

Early we see in the second half that Tottenham allowed the Everton unit to press forward and then chose to play over the press as opposed to through it. In the image below, the Tottenham backline has maintained possession to draw in the Everton attacking and midfield lines.

In this moment, Godfrey recognizes that a ball behind the Everton line could be destructive and sends an aerial ball into the central channel. 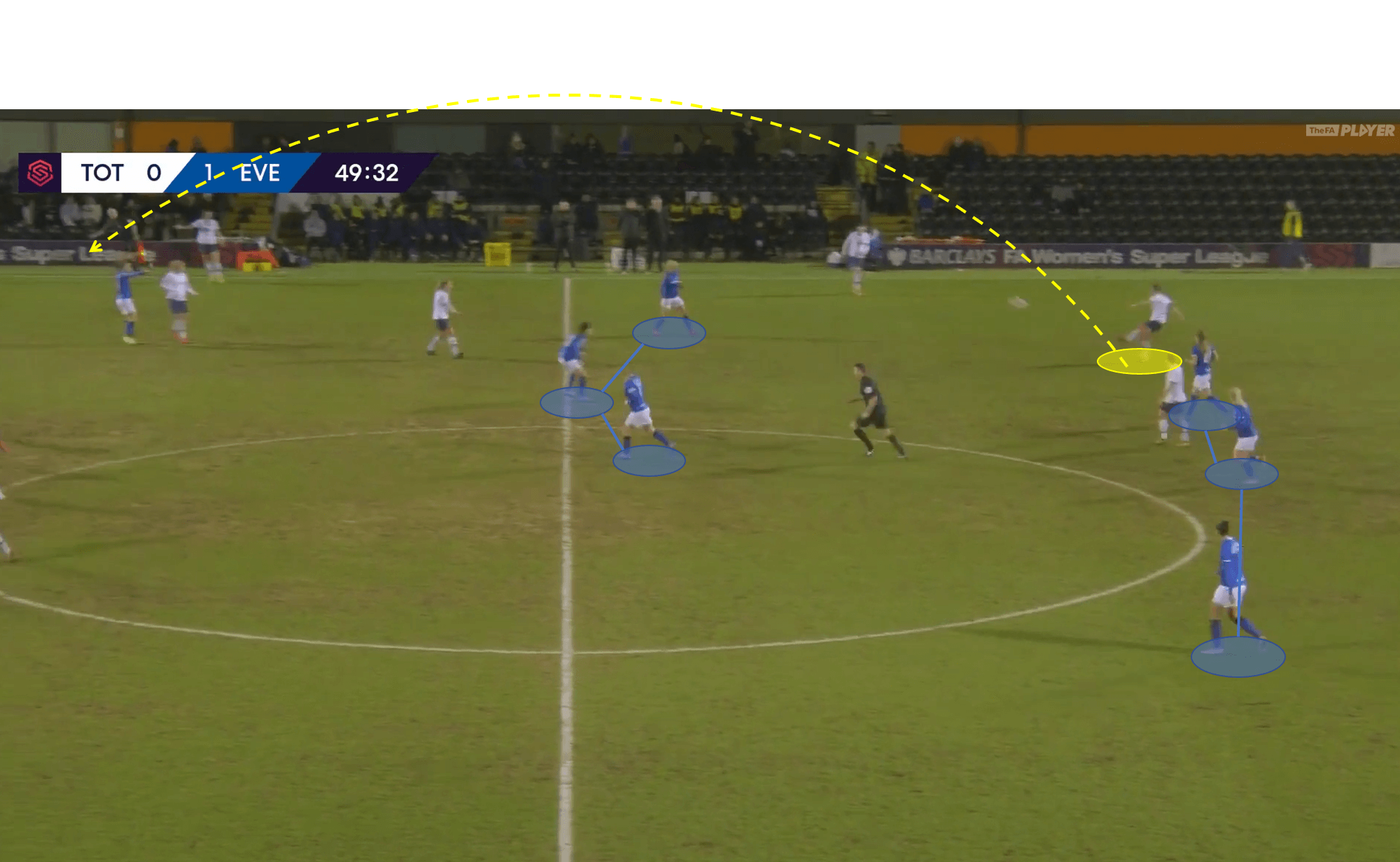 Dean and Addison are ready for the ball behind and have started their attacking runs as Godfrey looks upfield. The ball arrives directly in front of Dean, who has to fight off two defenders to maintain possession of the ball and create a chance on goal.

Everton win the ball and play it out of bounds to be safe, but Tottenham have now begun to establish that the space behind the Everton defensive line is no longer safe. 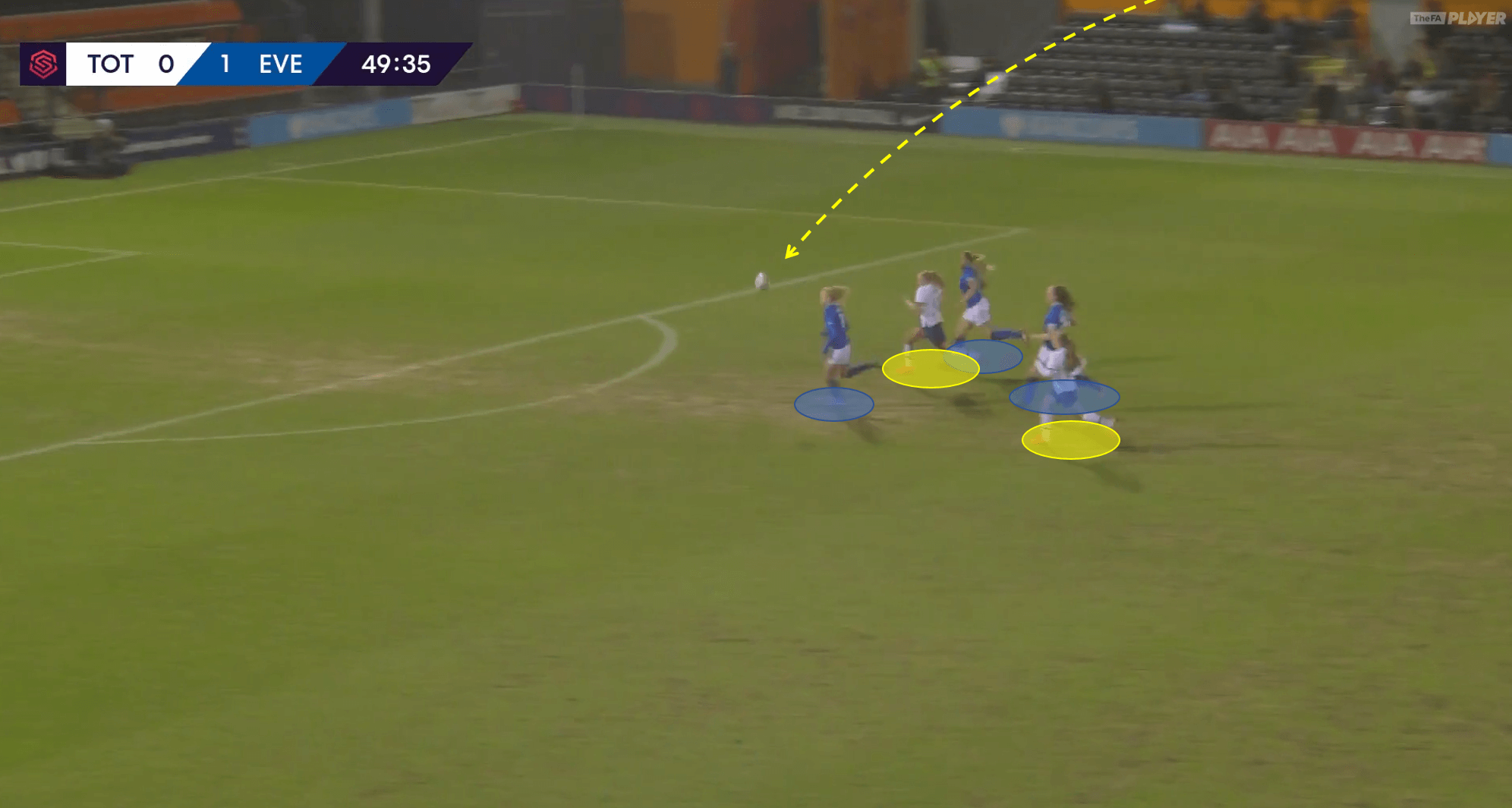 Throughout the first fifteen minutes of the second half, Tottenham repeatedly played the ball behind the Everton defensive line. None of these passes led to goals, but we can see that the threat of passes behind eventually created a large amount of space between the Everton midfield and defensive lines. 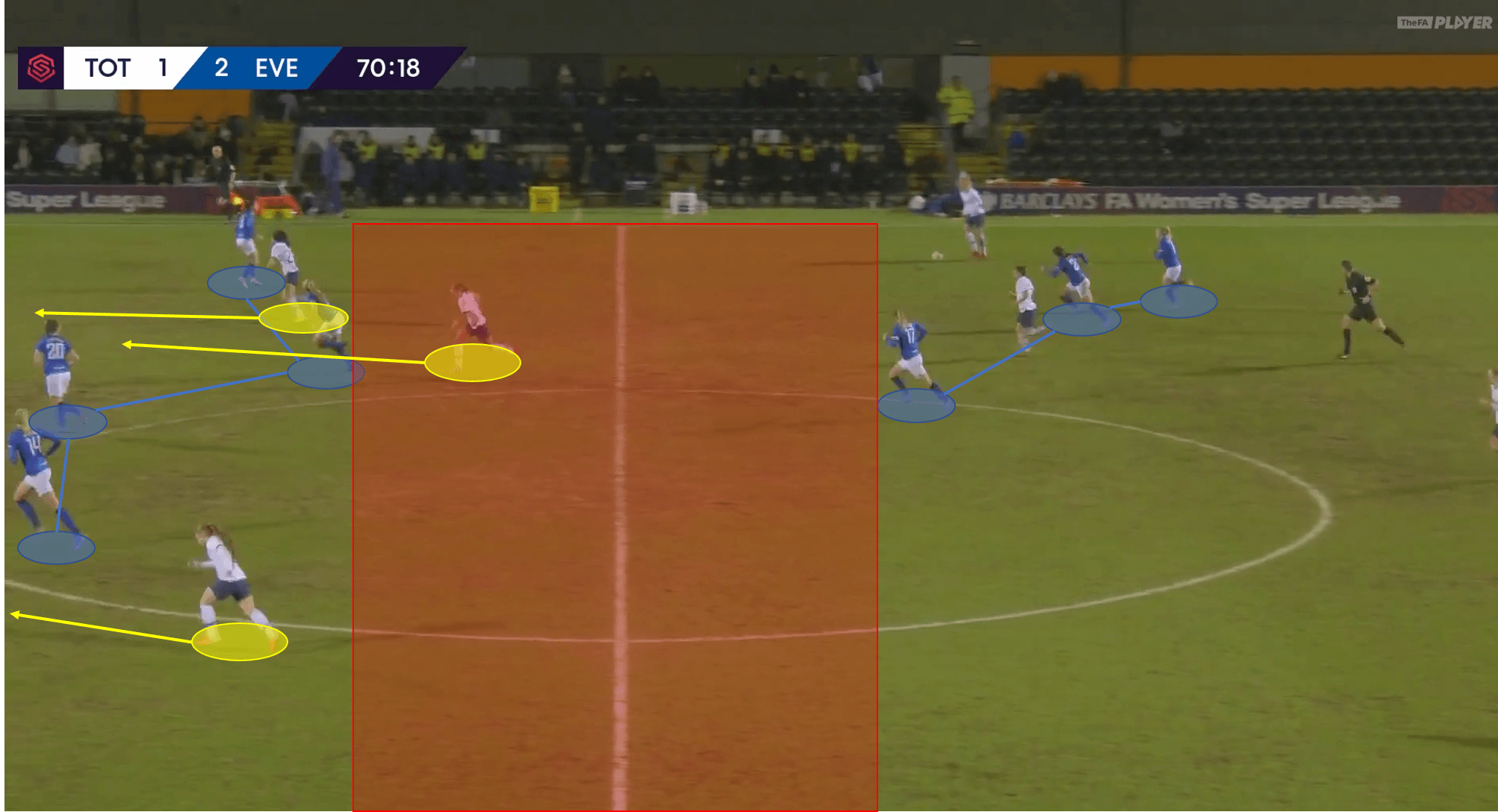 Eventually, Tottenham were able to use a blend of playing direct and their original play out of the back tactic to rally and tie up the match with Everton.

After a 2-2 draw, Everton and Tottenham left the pitch feeling that they should have walked away with a full three points. Both teams continue their struggle in the middle of the table with rival clubs Manchester United and Reading. Both managers will more than likely feel that they are only a few critical steps away from creating a team that can compete for a Champions League spot.