The FAWSL made its long-awaited return this weekend and brought some great matches along with it. Arsenal Women and Chelsea Women got back to winning ways with 2-0 and 3-1 wins respectively on Sunday. This meant it was crucial for Manchester City Women to find their form and keep up in the race for the title.

Tottenham Hotspur Women find themselves in the middle of the table as we head into the second half of the season. There have been some massive positives to take from the campaign thus far, while there is still some room for improvement that will leave managers Juan Amoros and Karen Hills confident that they can continue to improve and start to challenge higher up the table.

In this tactical analysis, we will take a look at City’s 4-1 win over Spurs this past Sunday. The Manchester side were on top form, executing their tactics to perfection during the match. This analysis will break down their structures and also look into the bright spots Spurs can take moving forward. 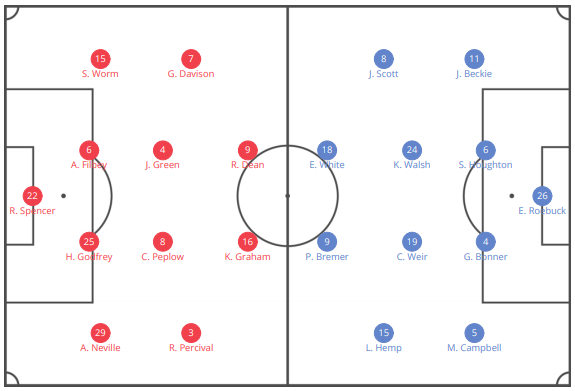 In this match, Cushing made a couple changes to his side. Campbell came in for Stokes at left-back, and on the right side, Bremer was included next to White at the expense of Wullaert. The second striker’s inclusion in the side gave a big hint at the attacking intent Manchester City were coming into this match with. While the image shows a 4-4-2 formation for the visiting side, they never fully worked in this structure. For the most part, Cushing’s side worked in a 4-3-3. However, instead of having a natural right-winger, Bremer and White played in a two-striker set-up and Beckie was given the space to move up and down the right side.

For Spurs, they lined up much similar to the side that faced off against Arsenal Women. Davison was brought in on the left side. Green and Peplow were used as a double pivot in their 4-4-2 system that were tasked with working tirelessly both attacking and defending. Up top, Dean was partnered by Graham and looked to get into the channels behind City’s attacking fullbacks.

Cushing has made a host of tactical alterations since the injury to Aoife Mannion before the winter break. Beckie’s inclusion at right-back has allowed for different dynamics throughout the side, and they were all on show in this match against Tottenham.

Before getting into the attacking third of City’s game, it is important to take a look at the initial build-up in their defensive third. In this area of the pitch, City are extremely flexible depending on the situation. We will be taking a look at the most common structure here, but I will be doing a more in-depth look at the various looks Cushing has put his side into in the coming weeks.

When possession was gained in this area of the pitch, City were very fast to set up to look to move forward. We have already mentioned Beckie’s role, playing up and down the right side as Bremer accompanied White up top. On the other side, Campbell played a bit of a hybrid role. Depending on the situation, she would drop in to form a back three with Bonner and Houghton. Most often though, she took a higher position and held the width on the left side. Therefore, Walsh and Weir were tasked with dropping deeper to combine with the two centre-halves to bring possession forward. We can see this almost box-like shape during this build-up below.

From this area, City looked for three options. Scott and Beckie occupied the right side and looked to find room to receive possession and move it forward into the strikers. Campbell and Hemp patrolled the left side with the same idea. The last, and probably the most effective on the day, was very un-Manchester City-like. The four players in the initial build-up looked for long through-balls over the top into the path of one of the front three of White, Bremer, and Hemp.

In this area, City were ruthless. The close positioning of the forward three took Tottenham by surprise, and gave them issues throughout the match, specifically in the first half. While City were unable to capitalise from one of the chances created by the third tactic, they scored using each of the first two. Above you can see possession being worked down the right-hand side of the pitch. Scott and Beckie combine very quickly to get around the attempted Spurs press. The right-back receives possession back into her feet, before finding a beautiful pass down the channel into White. The England number nine has the composure to settle the pass and send a low cross into the box for Bremer to take a touch around her marker and finish brilliantly to give Cushing’s side the lead.

After Spurs brought the game back to 2-1, City did not flinch. They continued to dominate possession and look for openings to extend their lead. The third goal came from excellent play down the left side. Weir receives possession in a deep position and plays it wide into Campell.

As soon as the pass is played into the left-back, the forward line pushes forward looking to expose space behind the Spurs backline. Campbell takes a touch and finds a pass down the line into Hemp running through the halfspace. The winger receives the pass and crosses back towards the edge of the box that finds Bremer for the first time finish. City were on top form throughout this match. Their expected goals for this match came out to 3.8, and while their tally slightly bettered this statistic, they could have scored a lot more.

2-0 down after five minutes of the match, Tottenham Hotspur Women did well not to get desperate to get back into the match. Rather, they stuck to their game plan. Amoros and Hills’ side looked to defend with numbers and attack quickly through their front two of Dean and Graham.

When possession was gained, Spurs players looked for two options. The first was a forward opportunity in the hope of a quick counter. With Manchester City Women’s attacking-minded tactics, space was available in behind to be exploited. We discussed earlier City’s shape in their initial build-up. Due to the full-backs high positioning, there was often space left in the wide areas in behind. These areas were the perfect avenues for Spurs to look to make forward clearances with the view of one of Dean or Graham getting on the end of them.

In the image above, Spurs looked to press City in possession in the wide areas. Houghton is caught in a fairly unfamiliar situation out here by Graham and looks to find Bonner with a back pass. However, the press is effective, and the England international’s pass is weak, giving Dean the chance to run onto it. Spurs are now in a situation where they are able to isolate City’s defenders and look to break with speed. As you can see below Spurs find a two-v-two opportunity from this mistake. Houghton tries to recover but ends up fouling Dean in the penalty area as a result, allowing Spurs to get back into the match from the spot.

If forward options were not presented to them, Spurs looked to retain possession and build possession slowly. This tactic was evident through portions of this match. In the image below, you are able to see City’s press with five players being deployed very high up the pitch. Spurs were quick to look for options around this press, and Green dropped possession into her centre-half to look up and over the danger, finding Dean who shielder her marker to receive the pass.

Through her brilliant work, she held up possession and allowed her teammates to present her with options. Davison showed for a pass on the left touchline and found Green in a central position. Getting her head up, the Spurs captain switched play to the right side of the pitch and ended at Neville’s feet. She initially beat her marker but was caught holding onto the ball too long. However, this move showed the progress in working in possession Spurs have made throughout the campaign.

City’s dominance started with their work-rate when out of possession. Cushing set his team out to press Spurs quickly to limit the time they had to look for their counter-attacking opportunities. To accomplish this, City’s press needed to start for the second they lost possession.

When a player lost the ball, they immediately looked to gain it back. As they pressed, two or three teammates looked to quickly surround where possession was being held, to force a long clearance. This gave City’s centre-halves the opportunities to win the ball back and start their build-up once again.

In the move involving the image above, Spurs have attempted to play possession short from a goal kick. Immediately following the initial pass, City sent four players to press high in the Spurs defensive half. Possession came to Neville at right-back, who Hemp was quick to step forward onto to limit the forward options for the defender. White and Bremer also marked the centre-halves to force a pass back to the goalkeeper.

Neville was forced into doing exactly what City were hoping for. When Spencer receives the pass, she is given no option but to kick it long. Houghton wins the header and City gain possession again to start their attack from their initial build-up. This high press prevented Tottenham Hotspur Women from ever getting fully comfortable in possession. City recovered possession a whopping 81 times in this match.

From the start, Manchester City Women overwhelmed Tottenham Hotspur Women. Their mixture of tactical brilliance and individual quality were too much for the London side, who are still gaining their feet in England’s top flight. They made improvements in the second half but by this time, the three points were already on the way back to Manchester.

Cushing will be extremely pleased with what was on show this past Sunday. Following the winter break, his side are hitting top form and will be looking to continue in this vein in the lead up to their major match against Arsenal Women at the beginning of November. For Spurs, they will continue to look to build on their start to the season. The experience they have gained so far is invaluable, and they will be looking to learn from their mistakes and possibly provide a twist to the title race when they come up against the league’s top dogs a second time around.