As we head into the winter break in this year’s FAWSL campaign, no team had the ability to take their foot off the gas in any capacity. Arsenal Women travelled to Everton Women in a top-five clash this past Sunday. Joe Montemurro’s side have been in fine form and were looking to continue on this path as we prepare to enter the business end of the season. With Chelsea drawing to Liverpool 1-1, they had the chance to end 2019 top of the pile.

Everton Women have had a very encouraging season so far. Sitting in fifth place in the table, Willie Kurk has his side showing some much-improved form from last season. On 15 points already, they have already improved upon their total of 12 in 2018-19.

In this tactical analysis, we will look at Arsenal Women’s 3-1 victory over Everton Women in this final match of the calendar year. Everton’s tactics set up to try and frustrate the league leaders but were not successful. A mixture of Arsenal’s individual skill and Montemurro’s intricate tactics allowed the visiting side to have a great deal of success throughout the match breaking the Everton defence down. 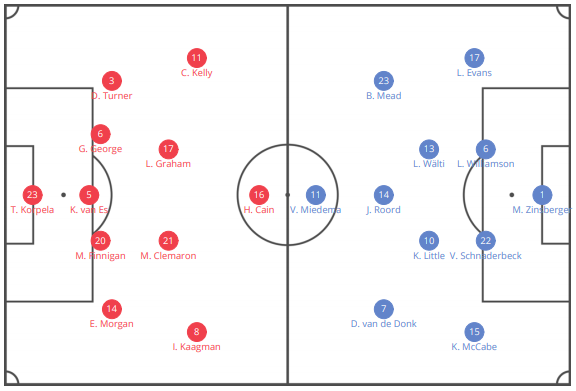 Heading into this match, both sides made multiple changes to the sides that started last weekend’s matches. For Montemurro, he went with Jill Roord in an advanced midfield position ahead of Jordan Nobbs. In defence, Viktoria Schnaderbeck replaced Beattie alongside Leah Williamson in the heart of defence. The two changes did not alter the general set-up of the side, however, with Montemurro’s tactics and structures totally ingrained in his side, top to bottom.

Kirk went for a very defensive structure as they hosted the league leaders. Moving away from his usual 4-5-1/ 4-3-3 set-up, Everton lined up in a 5-4-1. They looked to press high to direct Arsenal’s build-up before setting up in a deep block to defend with numbers for large periods of the match. This analysis will look at the positives and negatives of this set-up.

Kirk set out this match to respect Arsenal’s attacking ability, but look to make life uncomfortable for them. Everton Women opted for a five-back formation to try and limit the amount of space Arsenal Women had to work in. Higher up the pitch, the home side was rather aggressive with their initial press. Often times, they would push four or five players forward to restrict space for Arsenal’s defenders as they looked for forward options. Everton wanted to stunt this progress by forcing sideways or backwards passes, and looking for turnovers when they could make an attempt without leaving the rest of the pitch exposed. Below you can see the players Everton Women sent forward in pressing possession.

Everton struggled to keep possession for large portions of the match. This emphasised the importance of having an effective pressing game. When Arsenal played a pass back to the goalkeeper, they looked to block off any short passing lanes in the hope of forcing a long kick. Here it would be up to the three centre-halves to win the first or second ball and try and gain a hold in the match. In the image below you can see Everton using this press as Katie McCabe receives possession at left-back. When she cannot find a forward pass she goes back to the goalkeeper.

Everton then look to go from pressing the player in possession to blocking off every immediate passing lane Manuela Zinsberger has. This forces the keeper to look for a long pass to an advanced player or a clearance to avoid a turnover. She looks long for Vivianne Miedema, who wins the initial ball, but Everton’s defence is able to crowd her out and gain possession back to start their own attack.

This tactic had moments of success, as shown above. However, Everton Women were unable to find opportunities to capitalise on any mistakes made by their visitors in this match. Arsenal made them pay, by being ruthless on the other end, and deciding the match before Everton were even able to get on the scoresheet.

Despite Everton Women’s best efforts to block off Arsenal Women’s build-up from having any success, this tactic was not very effective. Instead, it would often leave Kirk’s side very vulnerable on the counter-attack.

When Arsenal Women encountered issues building from the defence due to Everton’s press, they looked to vary their shape in this phase. Lia Walti oftentimes took the role of dropping into a defensive three. This was done to allow Arsenal to have numerical superiority in this area of the pitch when Everton pressed the centre-halves with two attackers. With an extra player in Walti in this position, it gave the likes of Williamson the opportunity to have more mobility and cause disruption to Everton’s press. Kim Little and Noord also dropped into deeper positions in these circumstances to create passing triangles ahead of the defensive line.

As you can see in the image above, Everton is working in their high press. Williamson is forced to turn back towards her own goal due to the aggressive nature of her marker. Walti recognizes the trouble her defensive teammate is in and drops in between the centre-halves to provide support.

Possession is moved from Williamson to Walti, then out to Schnaderbeck, who is immediately pressed high as well. Walti moves into a wide area to allow a passing option, with the full-backs in a high starting position looking to attack. When the pass is made into Walti, Schnaderbeck uses her intelligence to identify the space in midfield that has been left vacated due to the Everton defender following Walti into this deep, wide position. She makes a forward run into this space to receive possession back.

Notice in the image above as well, Little has dropped into a deep area to act as an outlet.  Because Everton Women typically sent four or five players to press Arsenal in these high areas, this left a large amount of space in the midfield that was not being marked. Once Schnaderbeck receives the pass from Walti, Little moves closer to show for the ball. An Everton defender attempts to step forward and tackle the centre-half, but she is able to make the pass into Little, who is left in acres of space to counter against an Everton backline that is quickly retreating and trying to mark the forward runs from Arsenal attackers.

Arsenal Women’s attacking success came from wide areas of the pitch. To get into dangerous areas in these positions, Montemurro’s side looked to create overloads across the pitch. With their array of attacking players who are able to shift into multiple different positions, Arsenal Women are very flexible when it comes to finding the right place to create these overloads. Below you can see the away side’s pass map from this match. You will notice the central positioning of all of the attacking players in the Arsenal side. With McCabe and Evans supplying the width, Van de Donk and Mead were afforded the ability to move around the pitch as they wanted. Along with the two centre-midfielders in Little and Roord, their central representation shows their fluidity moving from each side of the pitch as Arsenal looked to break Everton down.

When Arsenal Women were able to identify the potential areas of weakness, they looked for quick combinations to break down Everton Women’s defensive block. With the likes of Little and Roord in midfield being comfortable drifting wide and running into the channels, Everton needed the perfect defensive display to limit Arsenal from having success with these opportunities.

This tactic was evident in their first goal of the afternoon. A quick interchange between Evans, Little, and Mead can be seen in the image below. This highlights Little’s positioning in wide areas to allow for better numerical situations in these areas. As well, it also creates more opportunities for runs in behind, with any of these three able to move into space at any point during the build-up. Evans presses forward with possession, and Mead comes to show for a passing option, maintaining the side’s width. As the play moves to this side of the pitch, you can see Little moving in support of the two wide players.

Mead and Little exchange a quick one-two pass, before Little darts forward into the channel. This space has been left open due to the wing-back following Mead into this position away from her defensive line. Little is able to get on the end of Mead’s pass and deliver a perfect cross into Miedema to make it 1-0.

Little put in a complete performance for Montemurro and her Arsenal Women teammates in this match. Throughout this analysis, we have seen the major contributions she made to both sides of the pitch. She consistently dropped deep to help Walti in the build-up against Everton’s press. On the attacking side, we discussed her assist to Miedema for the first goal of the afternoon, using her movements into the wide areas of the pitch. She also used this to draw the penalty for the second goal of the afternoon. Below you can see Little’s heat map. In this, you are able to see the tactics we have discussed are evident in where she found possession throughout the match.

The Arsenal Women’s captain is continuing her impressive form week on week. She will be essential to Montemurro and his side’s chances at success. This match gave a perfect example of the versatility she can offer as Arsenal will have to continue to break down sides as they look to defend in deep blocks against the league’s most dangerous attacking sides.

Arsenal Women head into the winter break at the top of the table. Aside from a breakdown in the final stages of their match against rivals Chelsea, which resulted in a 2-1 loss, they have been in total control of every match they have played. Now, they have time to rest their legs and prepare for the road ahead. Chelsea and Manchester City Women will not be prepared to give up in the title race yet, especially with neither team fighting in the latter stages of the Champions League. For Arsenal, however, a daunting path including Paris Saint-Germain in the quarterfinals and a possible matchup with Olympique Lyonnais in the semifinals will give Montemurro much to think about in the coming months in their own European conquests. He will certainly be hopeful for positive news on the injury of Mead, who was forced off in the first half of this match.

For Kirk and his Everton Women side, this match will prove to be a good lesson of the strides they must make to break into England’s elite. They are a much-improved side since his appointment last January, however, and fans will be pleased with their first half of this FAWSL campaign. The players are still learning the tactics Kirk is looking to implement, and Everton Women will continue to prove to be one of the more difficult sides to face in England’s top flight in years to come.