Matchday ten of the FAWSL brought us an entertaining clash with Manchester City Women hosting Brighton and Hove Albion Women. Manchester City were looking to bounce back from a loss to title-contending rivals Chelsea in a contest that saw City outshot at an over two to one ratio. Brighton took to the pitch with the aim of gaining a point or three to distance themselves from the looming relegation zone.

Could City kick their attacking tactics back into gear and get back to winning ways or would Brighton force the hosts to drop points at home? After analysis, we can see that Manchester City let it be known that they are still a squad to be feared throughout the league. This tactical analysis will tell us exactly what happened.

Manchester City manager Nick Cushing has sculpted his squad into a force that thrives on positional play. An oversimplified way to describe positional play is that a team in possession seeks to create various superiorities across the pitch through intelligent positioning of personnel to create optimal relationships between each player. Although the positional play philosophy can be fairly complex, an easy way to measure a team’s style is to look at the team’s attacking structure throughout a match.

Manchester, when in possession, sought to create an asymmetrical shape that created numerical dominance in the centre of the pitch. They also created width in attack by using players from the midfield and defensive lines. This allowed the two strikers to remain narrow and create a constant threat in the central channel

The City starting line up can be described as a 4-4-2, although when in possession, the squad could rarely be seen in true four-flat-two shape. When in possession, the City shape would morph to create staggered lines of players up the pitch. While positioning themselves at different heights up the pitch, eight of the ten outfield City players could be found within the central channel and halfspaces.

When in possession the defensive line would slide to the right with Megan Campbell aligning in the left halfspace, Gemma Bonner in the central channel, and Steph Houghton in the right halfspace. This shift allowed “right-back” Janine Beckie to push high up the right flank and create width in attack without leaving any defensive gaps behind.

Meanwhile, the midfield line saw Keira Walsh drop into the midfield pivot role with Caroline Weir pushing higher while remaining in the central channel. Right midfielder Jill Scott took position in the right halfspace, looking to move behind the Brighton line of midfield four. Lauren Hemp, who was technically the left midfielder, drifted wide and high into the left flank to provide attacking width on the left side.

Forwards Georgia Stanway and Ellen White typically pinched together in the Brighton defensive line and rarely strayed from the central channel.

We can see that this structure allowed Manchester City to allocate players at different heights across the pitch at all times. This structure allowed for a high level of connectivity between players, which helped created fairly clean attacking progression for the City squad throughout the match.

When it comes to players used within the structure, we can also see that although City used the left midfielder and right back to provide width, both players used are typically considered potent attacking players. Hemp, on the left flank, has already won England’s Young Player of the Year award (2017) and is considered a forward with extraordinary potential. Beckie, on the right flank, can also be considered a potential prolific attacker, having set the goal-scoring record for the women’s team at Texas Tech University during her time there.

By implementing this structure in possession, City were able to create an optimal attacking team shape. This team shape allowed City to progress up the pitch with ease and maintain a strong presence in the central channels in the event of losing the ball. City dominated the first half and were up 3-0 at the break.

Beckie proved to be a dominant force throughout the match. She could be found in dangerous positions at any given time and constantly contributed to goal scoring chances for the Manchester squad. She did this not through one set tactic, but through multiple attacking forms.

City sought to place Beckie in areas to create chances on goal through tactics such as overloading one side of the pitch to isolate Beckie in attacking space on the opposite side and the use of combination play with Scott in the right halfspace.

The second goal of the match in the fourteenth minute is a near-perfect example of City overloading one side of the pitch to isolate Beckie on the far side. City played the ball patiently down the left flank to Hemp. In this moment City did not look to penetrate into the box but sought to maintain possession by connecting short conservative passes.

These short passes slowly drew in the Brighton midfield and defensive lines, who shifted over to smother the Manchester City attack. Brighton applied pressure to the ball while maintaining horizontal and vertical compactness. This opened up expansive space on the right flank and right halfspace for City to attack. Below we can see Beckie advancing up the pitch on the blindside of the entire Brighton block. 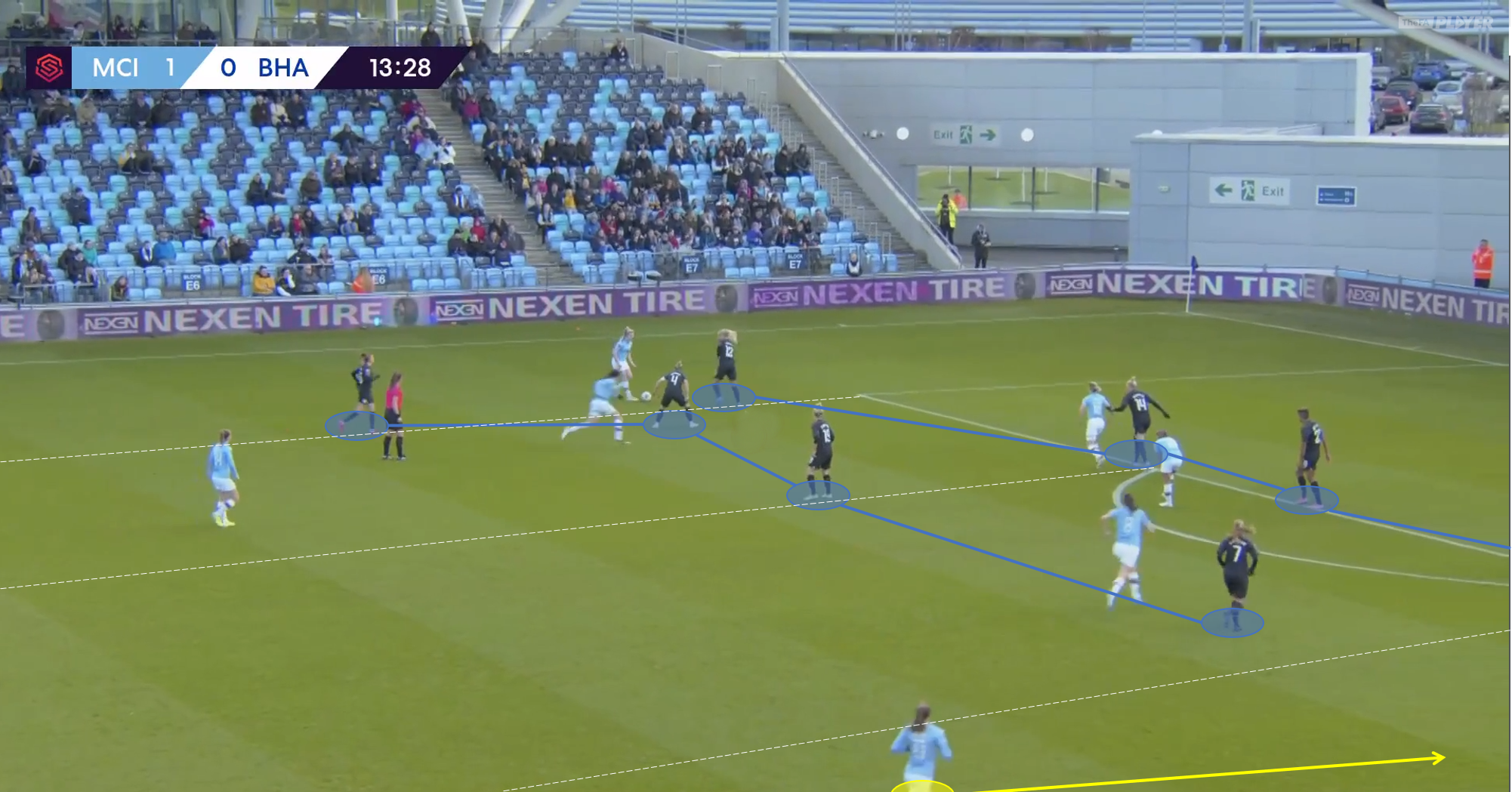 After all Brighton players had been drawn to the central channel, left halfspace and left flank, City quickly circulated the ball to the defensive line. Houghton received the ball across her body and immediately played the ball to the feet of Beckie, who was now positioned on the right touchline as high as possible. 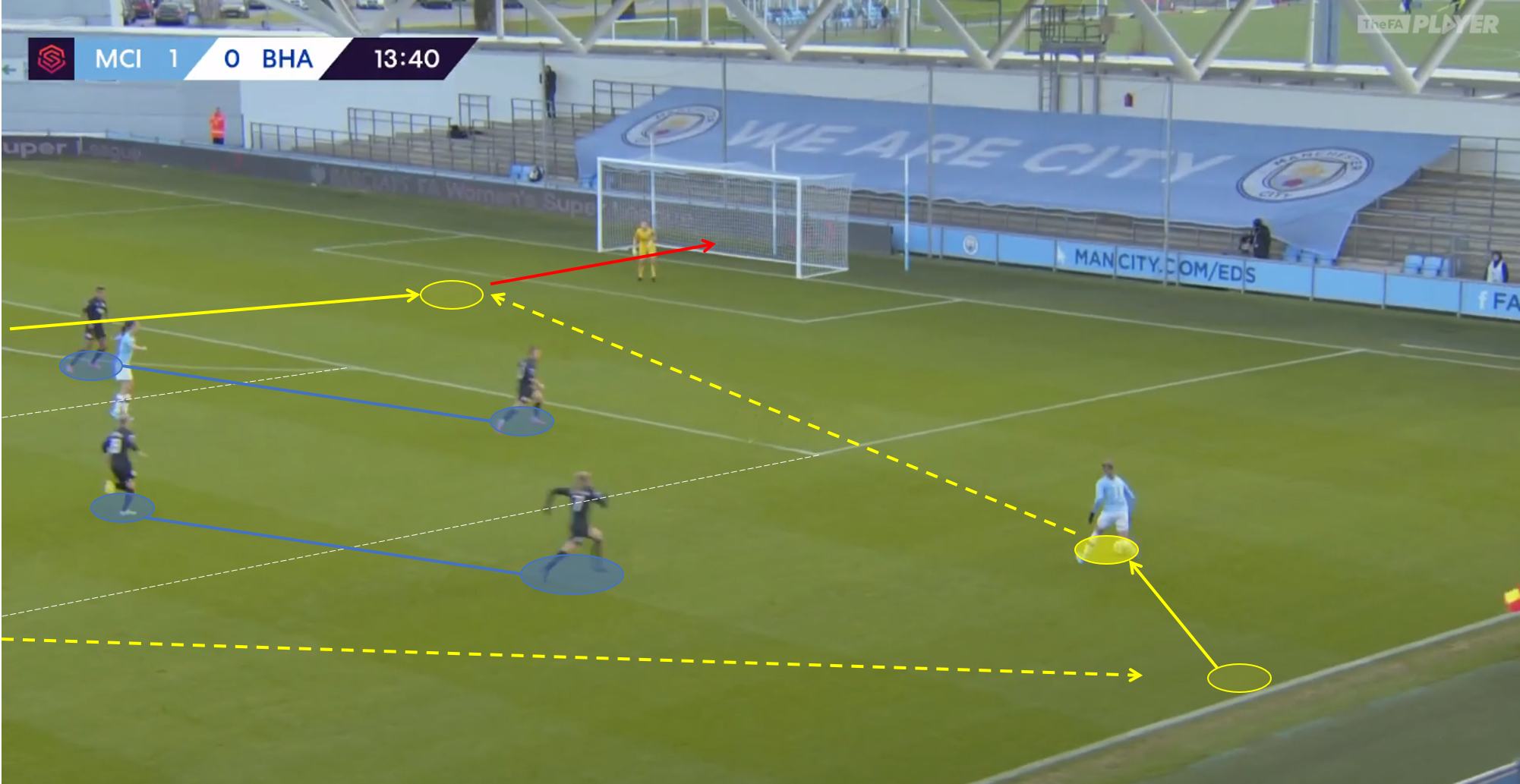 Beckie received the ball with absolutely no defensive players in her channel and dribbled aggressively to goal. The Brighton block attempted to quickly shift over and pressure Beckie into a mistake. As Beckie drove forward, White made an attacking run into the centre of the box. She drove in a pacy cross that White easily one-touched into the back of the net.

Beckie was encouraged to dribble with pace and aggression no matter where she was on the pitch. In the thirty-ninth minute, Beckie dropped deep into City’s defensive third to assist with building out of the back. Beckie received the ball in the right flank from Houghton. Beckie began to dribble forwards at an inward angle towards the right halfspace. By doing this, she drew in pressure from two of the Brighton midfielders, which opened up space for Scott to receive. As soon as Beckie had drawn the Brighton midfielders far enough out of position, she released the ball to the feet of Scott, who now had a large amount of space to receive between the lines. 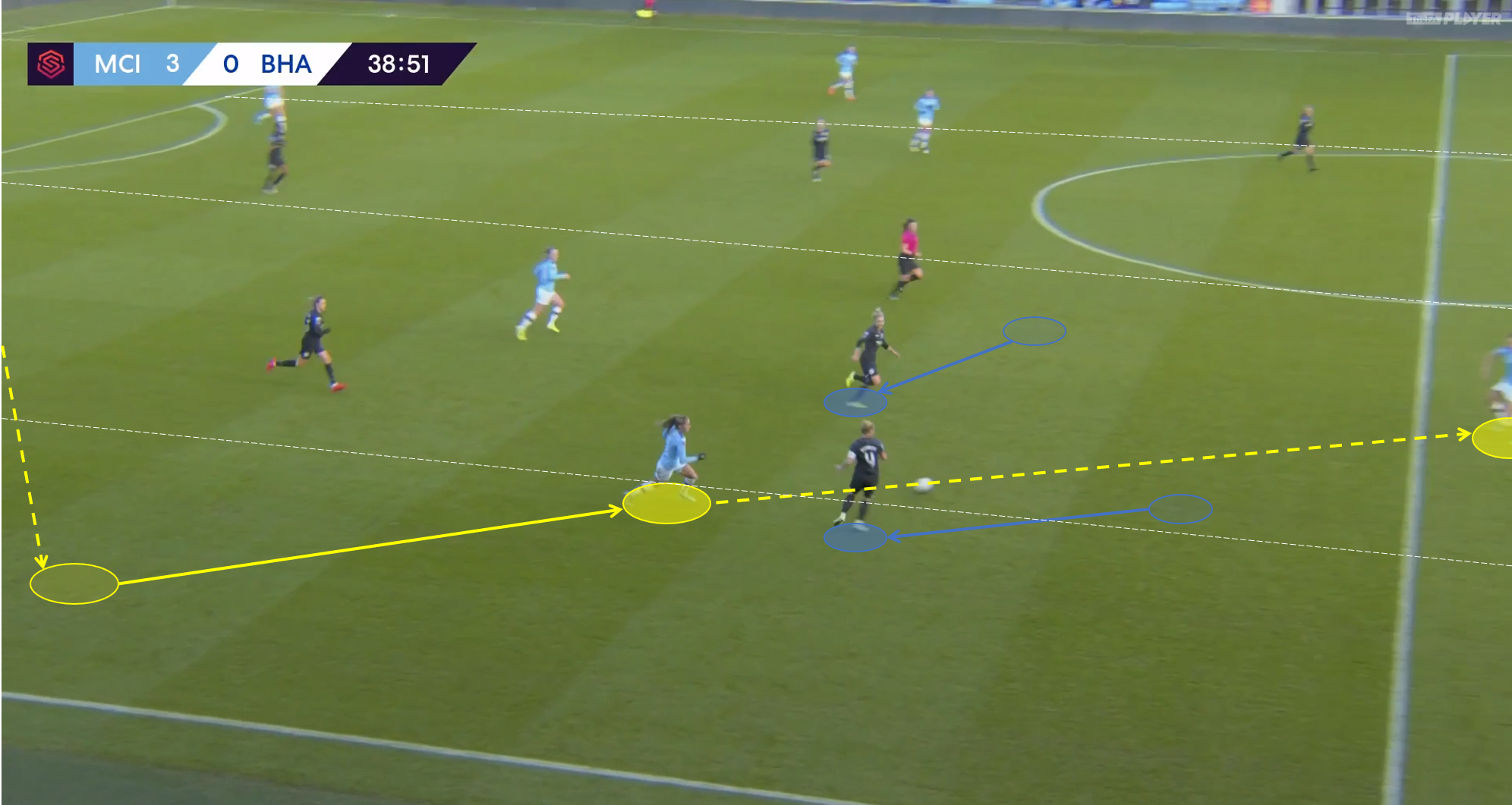 Having drawn both pressuring players into the halfspace, Beckie continued her run into the now wide open right flank. Scott’s reception of the ball in front of the defensive line invited pressure from the Brighton left-back Felicity Gibbons. This pressure from Gibbons, in turn, left even more space for Beckie to penetrate into. Scott recognized the open space to attack and played the ball into the path of the streaking Beckie. The City right-back received the ball and penetrated forward into the attacking third to create another dangerous chance on goal. 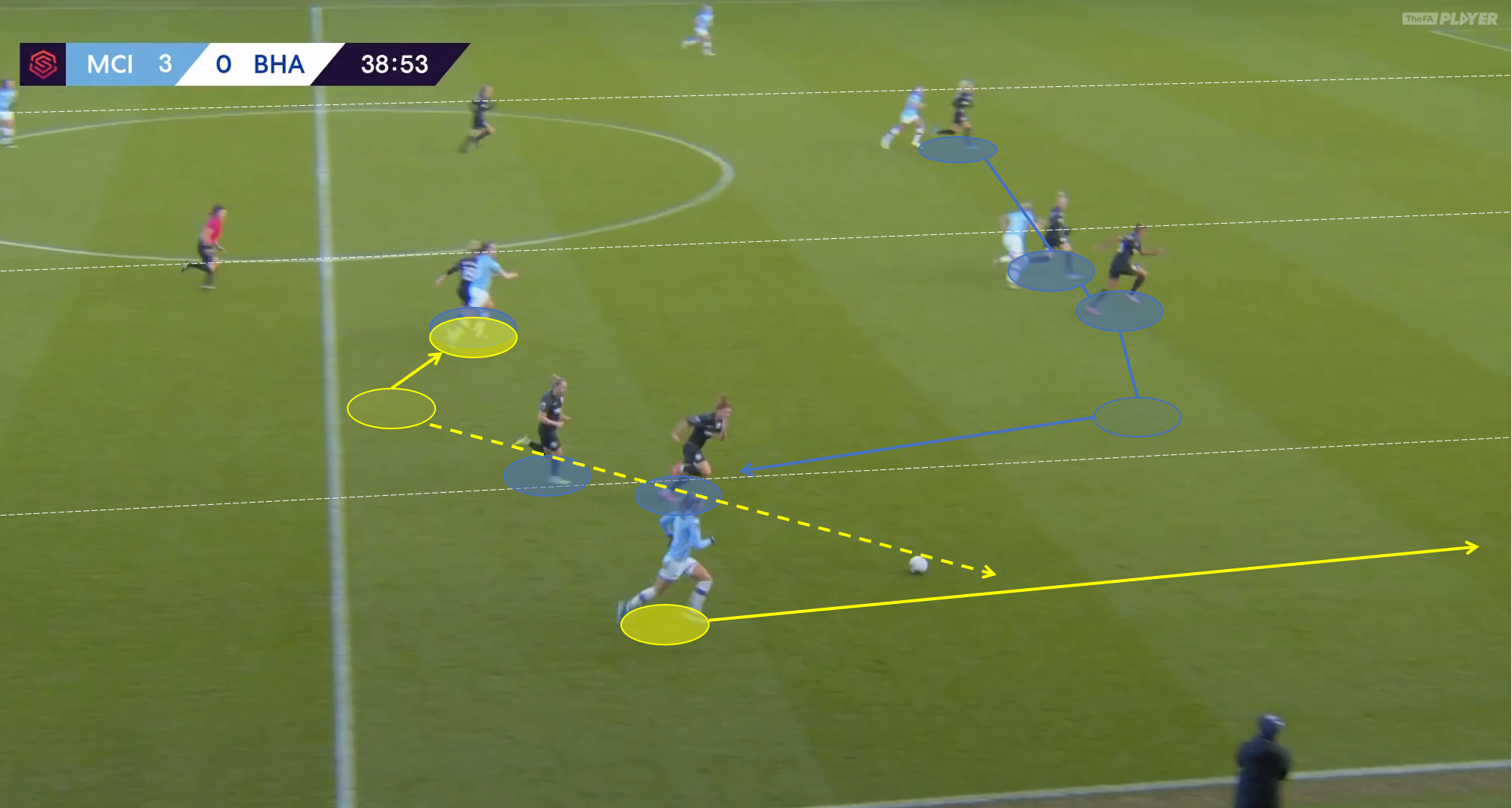 By using varying positions and tactics, Beckie was able to be a constant threat to the Brighton defensive unit. This proved to be one of the deciding factors of the contest, as Brighton were never able to truly come up with an effective way to stop her movements and attacks.

Brighton struggled to create any sort of attacking rhythm throughout the match. This is evidenced by the fact that at the end of the first half, the score was 3-0 in Manchester City’s favour, but the real startling statistic was that Brighton had an xG (expected goals) of 0.04 after the first forty-five minutes. We can see a few reasons for this.

Brighton aimed to play predominantly down the right flank. This is an interesting choice, considering that City were sending their right-back (Beckie) forward in almost all attacks, leaving space behind to potentially be exploited. Campbell (City left-back) typically remained behind in a defensive position on the Brighton right side. This left very little open space to attack for the Brighton unit. 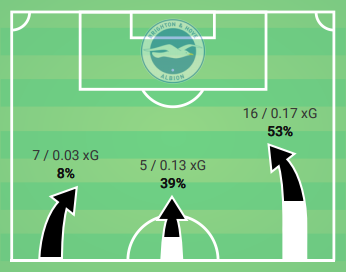 With that in mind, it is alarming that there less than three passes between the centrebacks. This shows us that there is a lack of horizontal circulation. Most of Brighton’s play went forward or backwards. We can also see that the connections of all outfield players with the central midfielders (#19 Emily Simpkins and #4 Danielle Bowman) are very weak as well. This also shows us a lack of central access for the Brighton unit. 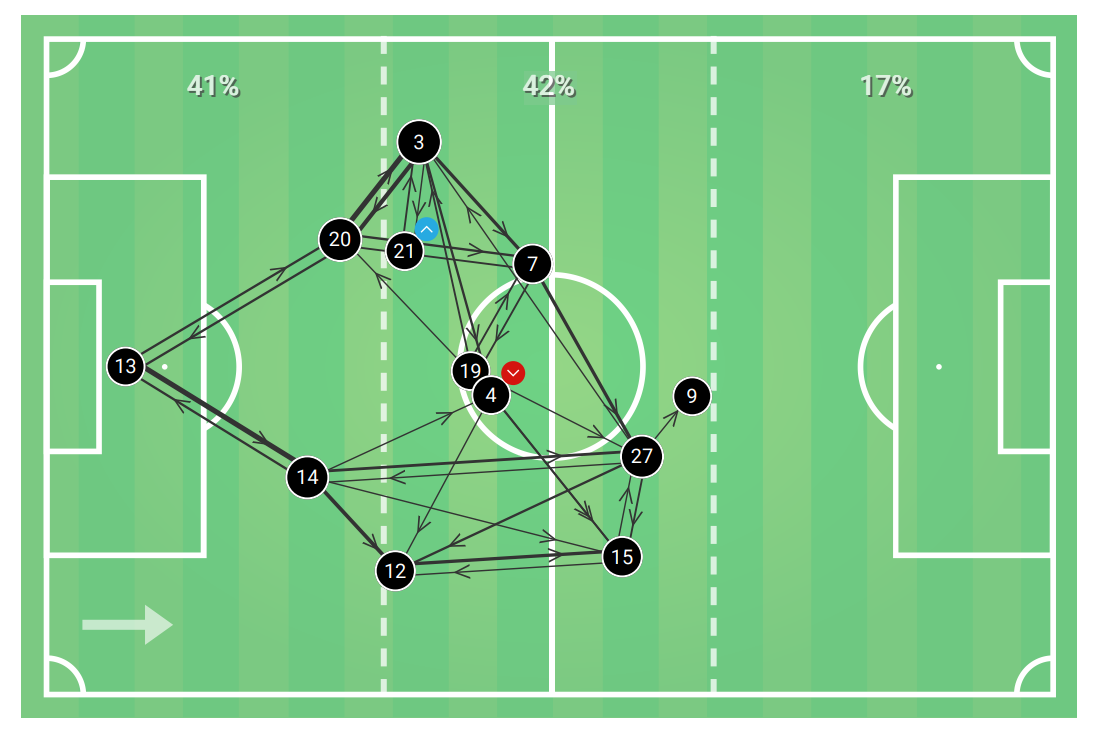 We also find that Manchester City were quite aggressive when out of possession, which also led to Brighton’s attacking struggles. City allowed 7.5 passes per a defensive action (PPDA) or an average of 7.5 passes before they won the ball back from Brighton.

To give a point of reference: during the first two seasons Pep Guardiola took the reigns at Barcelona and debatably created one of the best teams in history, their passes per defensive action barely wavered from the range of 6-9 PPDA. City were pressing aggressively and Brighton struggled to find an answer.

When an attacking team is faced with an aggressive defensive press, the attacking team may choose to play direct and pass the ball over a defending team’s press. This helps to bypass the entire defensive unit and find attacking space behind the defensive line. We can see in Brighton’s pass map that very few passes were played to forward Ini-Abasi Umotong. Brighton remained committed to playing through the City press and it did not result in very many quality chances on goal.

We can see below all of the locations that Brighton lost the ball during the first half (yellow representing an eventual shot on goal by Manchester City). Brighton struggled to keep the ball and constantly lost possession either in the defensive third or while trying to progress down the right flank. 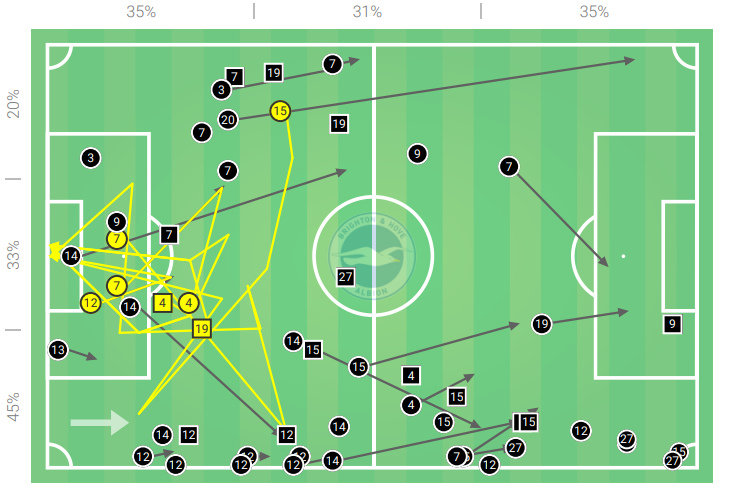 Brighton never looked comfortable at any point in the match. There is no one detail that can be pointed to as to the only reason why, but we can see that Brighton lacked horizontal circulation, central access to midfielders, and seemed to be playing predominantly down the right flank into a very efficient Manchester City press.