Matchday eight of the 2019/20 FAWSL brought us a clash involving two teams from different ends of the table. Manchester City are in a tight race at the top with Chelsea and Arsenal, with none of three teams willing to concede a step in the title race. Liverpool, on the other hand, have garnered one point so far in the current campaign. With City firing on all cylinders and Liverpool struggling to find a goal scoring rhythm, a blow out seemed to be inevitable. The match turned out to be anything but that.

Through analysis, we find that although Manchester City were able to dictate possession, quality chances on goal were surprisingly lacking. Liverpool’s out of possession tactics were disruptive enough to keep the visitors in the match up until the final whistle. This tactical analysis will look at exactly how it happened.

Manchester City: building out of the back

A common rule of thumb when building out of the back is to position one more player in the relative area than the opposition. With an extra player, the team in possession should hypothetically be able to maintain possession and progress up the pitch cleanly. Manchester City aimed to use the goalkeeper, defensive line, and a double pivot to build out of the back. This personnel usage paired with a staggering of the lines allowed the hosts to progress up the field cleanly.

In the fortieth minute, we see Manchester City circulate the ball to the right flank. At this moment we can see that both central defensive midfielders and the entire defensive line are positioned in front of the Liverpool defensive block. One winger has positioned up the flank, but cannot be reached due to the pressuring Liverpool player’s cover shadow.

Recognizing that forward progress is not realistic in this situation, City circulates the ball from the right-back to the centre-backs. 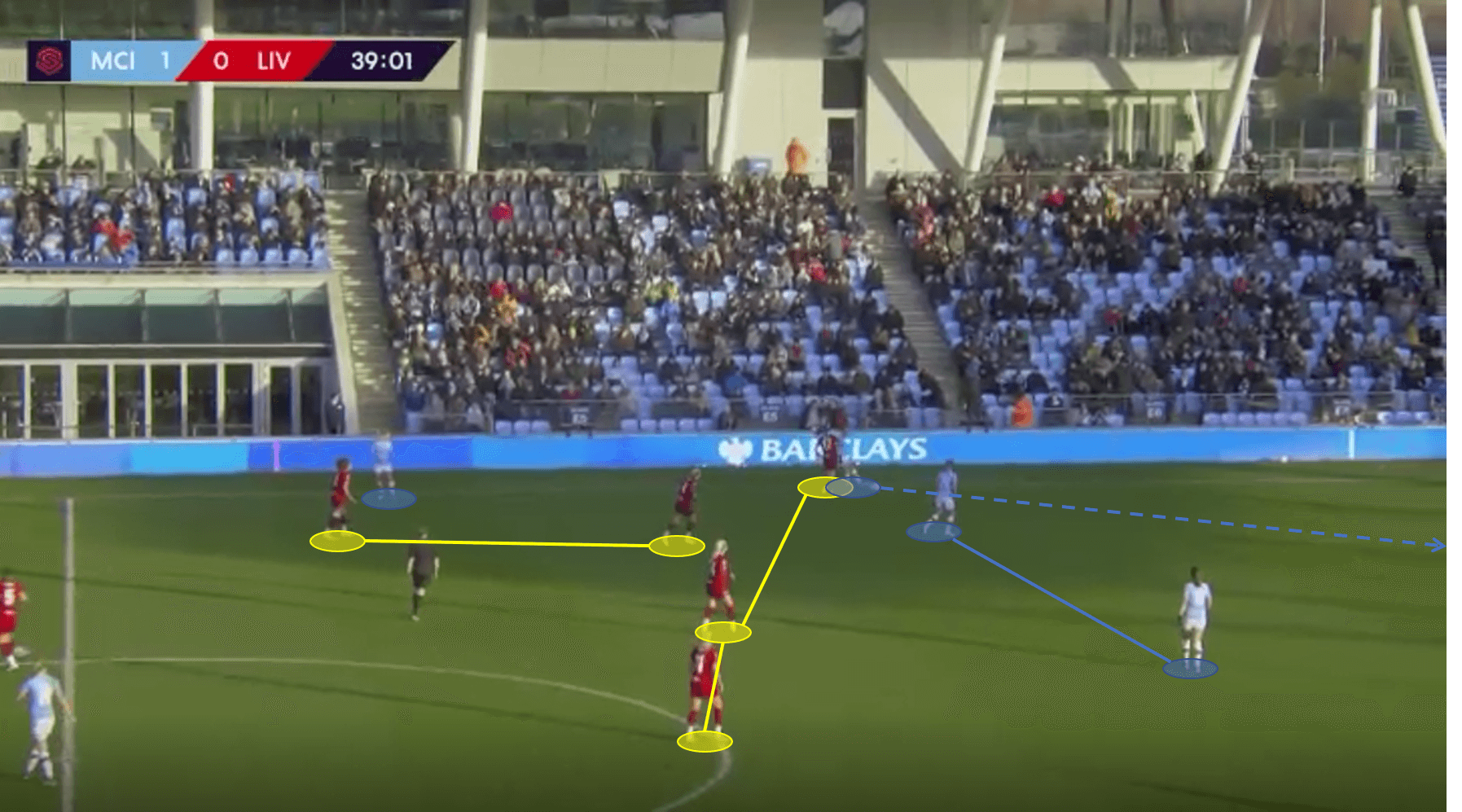 As the ball is passed backwards, City begin to adjust their team shape. Goalkeeper Ellie Roebuck vacates her position in the six-yard box and moves to the top of the eighteen yard box to offer an angle of support. Centre-backs Steph Houghton and Gemma Bonner take up a position in each halfspace to create a triangle.

Midfield players Caroline Weir and Keira Walsh relocate to the central channel and prioritize finding space behind the Liverpool midfield line of three. Using Wier and Walsh as a reference point, left-back Demi Stokes positions herself on the same horizontal line.

As we can see below, this build-up shape allows City to create numerous triangles and diamonds. This also allows City to potentially find a central pass through Walsh and Weir to penetrate the Liverpool block and progress up the pitch. City now have a six to four overload in the immediate area. 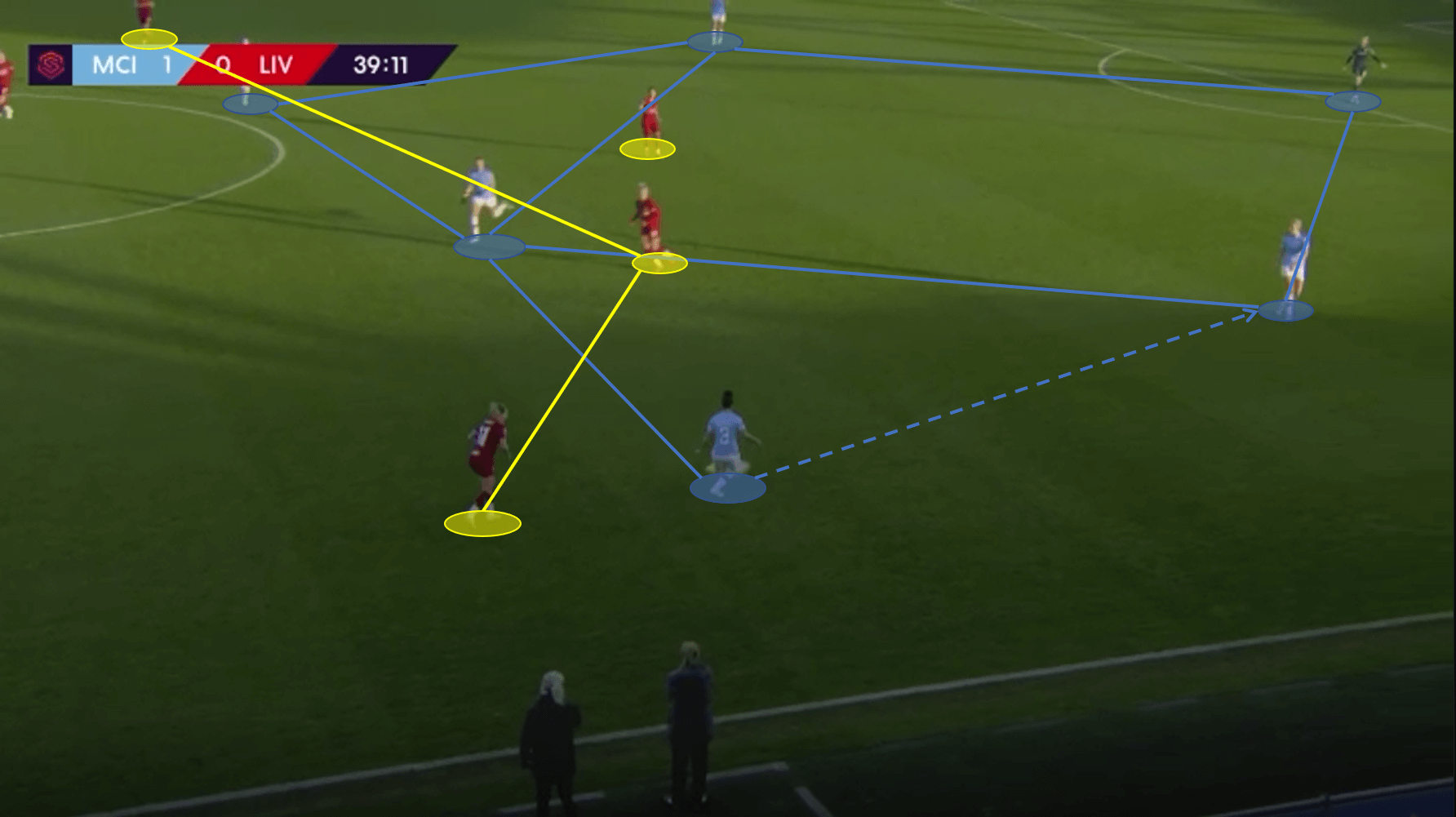 As the ball is circulated to the City left flank, all of Liverpool’s attention naturally follows the ball to the left side of the pitch. City right-back Janine Beckie takes advantage of this and vacates her defensive position to move much higher up the right flank, behind the Liverpool line of defensive midfielders. 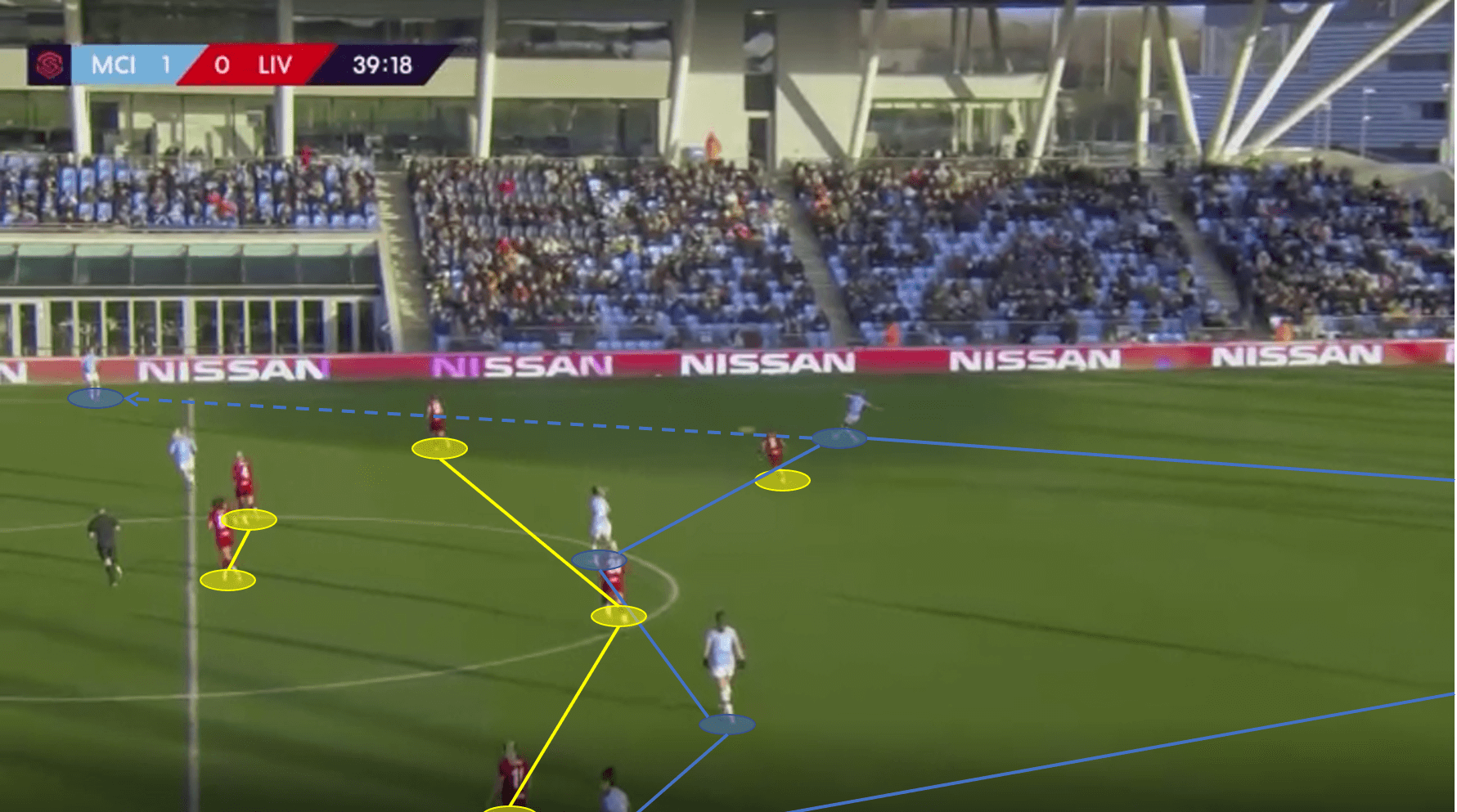 Once Liverpool have been drawn to the left side of the pitch, the ball is quickly circulated to the right flank and played to Beckie who awaits in dangerous space behind the Liverpool forward and midfield lines.

By creating overloads and a situational positional superiority, Manchester City were able to cleanly progress out of the defensive third of the pitch and progress upfield.

Liverpool: lack of off the ball movement

Liverpool entered matchday eight with only one goal scored so far during the league campaign. This lack of offensive production continued throughout the match. When in possession, off the ball Liverpool players lacked movement to create or take advantage of space. It was not uncommon to see a Liverpool ball carrier pressured while all nearby teammates remained stationary and focused on the ball.

Manchester City were able to initiate a player to player marking scheme that proved to be extremely effective. The major disadvantage of a player to player marking scheme is that the defending team is forced to react to the player movements of the attacking team. An example would be that if an attacking team’s central attacking midfielder is being marked, the midfielder can move anywhere on the pitch to drag the defending player out of position.

Obviously, this is easier said than done, but Liverpool showed very little off the ball movements to manipulate the Manchester City marking scheme. We see a few examples of this below.

In the eighth minute, Liverpool have possession in the central channel in the middle third. As the ball carrier moves forward, we can see the three immediate attacking players remain flat-footed and almost completely stationary. Close to each of the forward Liverpool players is a Manchester City player to mark them. At this moment the City players effectively mark out any forward passing options by positioning themselves near the Liverpool attackers.

Without any off the ball movement, the forward progress of the Liverpool attack comes to a grinding halt. Manchester City eventually regain possession. 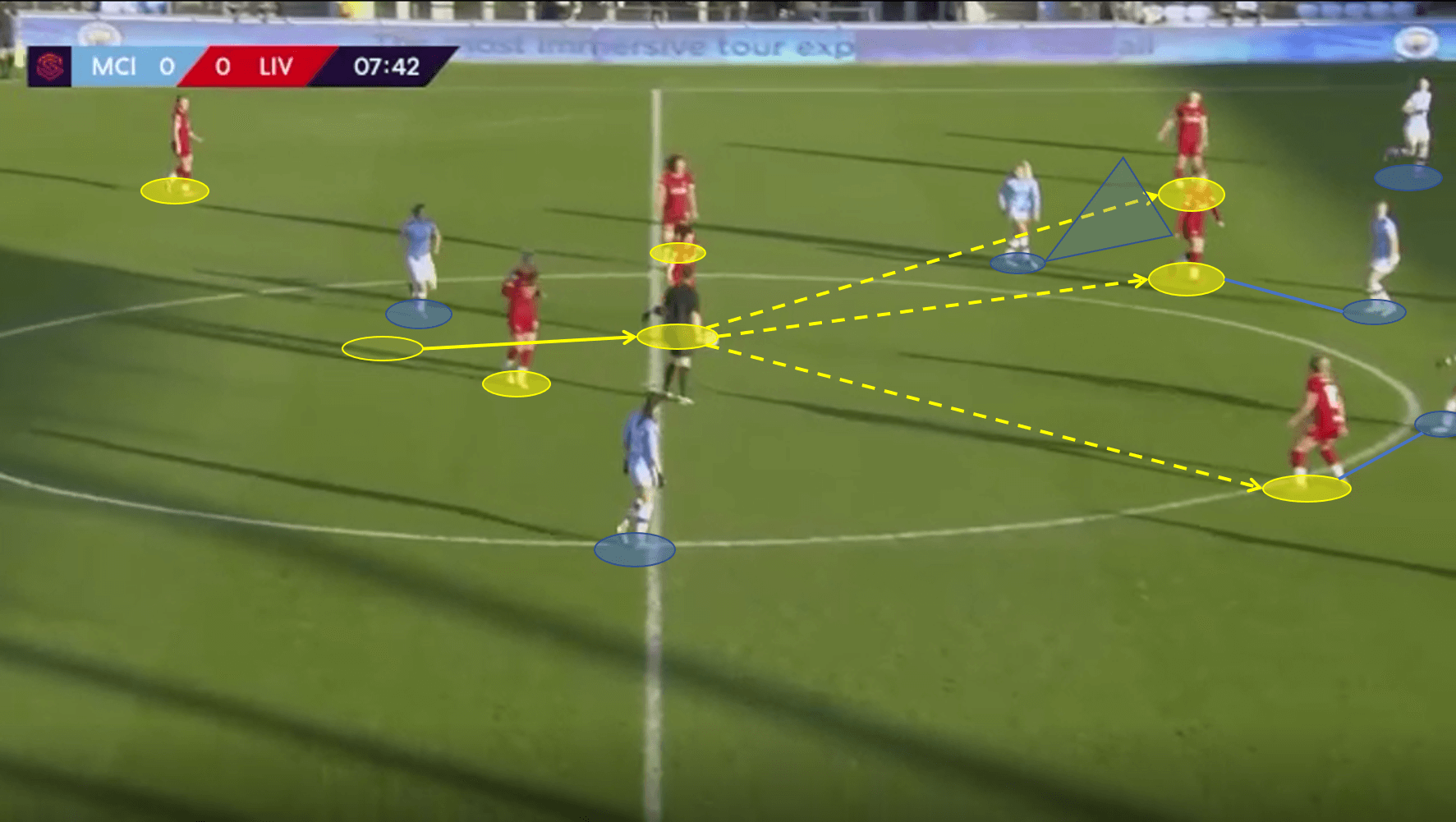 In the twenty-fifth minute, Liverpool are in possession again, but this time in the defensive third of the pitch. City have moved their defensive block forward and initiated a player to player marking scheme.

Again we can see that all off the ball Liverpool players remain completely stationary. Only one player, left-back Leighanne Robe, is open to receive the ball. Robe eventually receives the ball but finds herself in a similar situation of having no nearby passing options. Manchester City eventually regain possession. 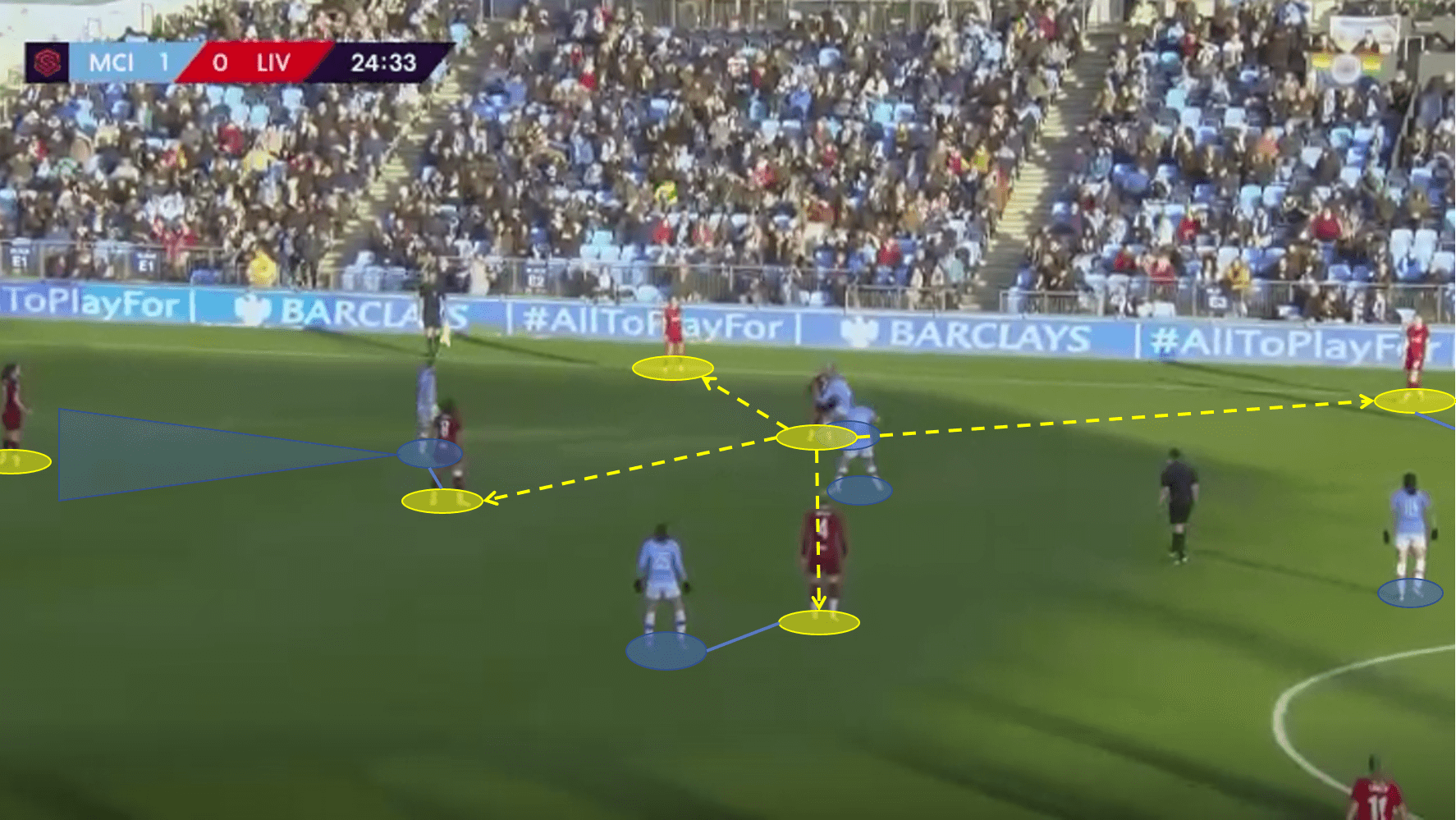 Again, in the forty-fourth minute, almost the exact same scenario plays out. This time Robe is the ball carrier under pressure and her back is to the opponent’s goal. Robe is under pressure from behind and struggles to keep possession of the ball. As this 1v1 duel occurs, we can see that all nearby Liverpool players are completely stationary and marked by a nearby City player. 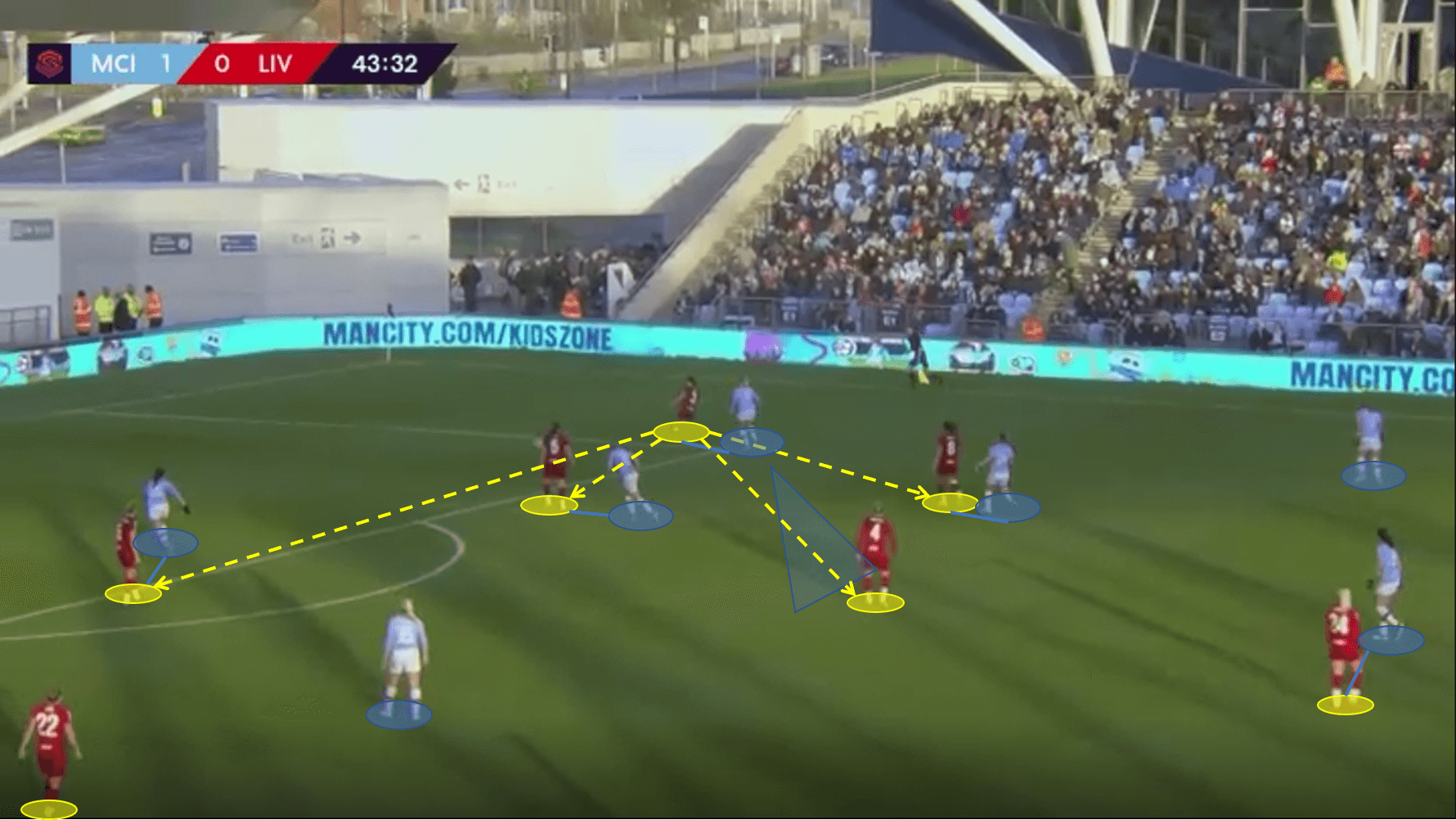 Due to a lack of off the ball attacking movements, Liverpool struggled to maintain possession and progress cleanly up the pitch. This resulted in very few quality chances on goal.

Liverpool: out of possession

A bright spot for the visiting Liverpool team was their ability to shift as a cohesive unit when out of possession to restrict Manchester City access to the attacking third.

By remaining horizontally and vertically compact, Liverpool were able to restrict space between the lines and smother City forward progression. This compactness paired with the ability to shift across the pitch quickly and cohesively caused many problems for the home team.

A great example of this occurred in the seventy-first minute. It must be pointed out that many teams struggle to maintain such a compact and fast-moving team shape throughout the course of a match. Manchester City have the ball on the left flank and left-back Stokes is carrying the ball forward.

Up until Stokes penetrates forward, the Liverpool block has maintained a position that is focused on cutting off any progression through the central channel. As Stokes progresses forward on the left flank, the Liverpool unit shifts towards that side of the pitch. 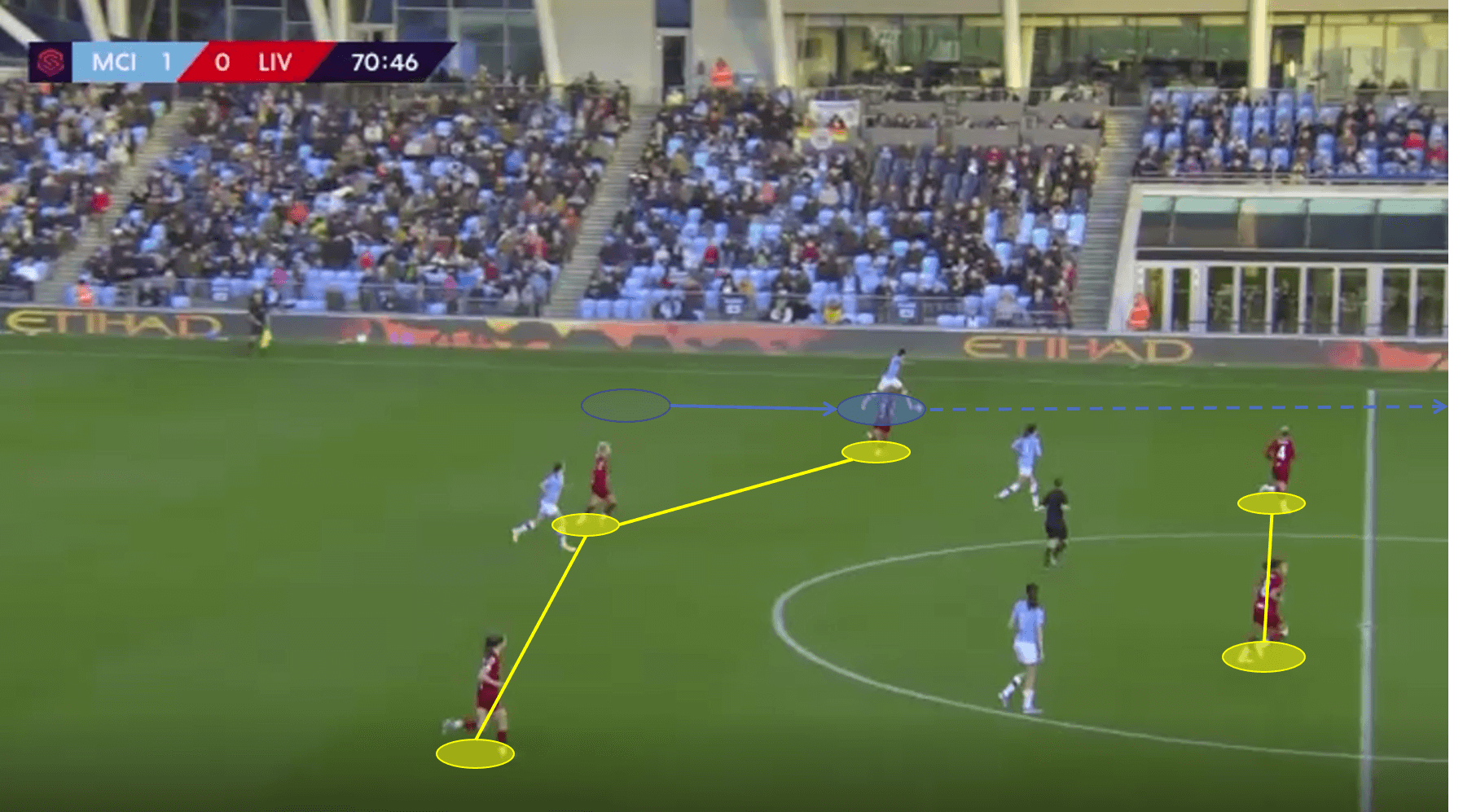 Stokes then passes the ball forward to Lauren Hemp who is on the same horizontal line as the Liverpool central defensive midfielders. Immediately, Hemp is pressured by three different Liverpool players. What must be noted is that each pressuring Liverpool player is from a different line of the defensive block.

Liverpool have positioned themselves to pressure the City attacker from three different angles. Liverpool are also able to maintain control of the central channel as well because the whole team has shifted and maintained their horizontal compactness. 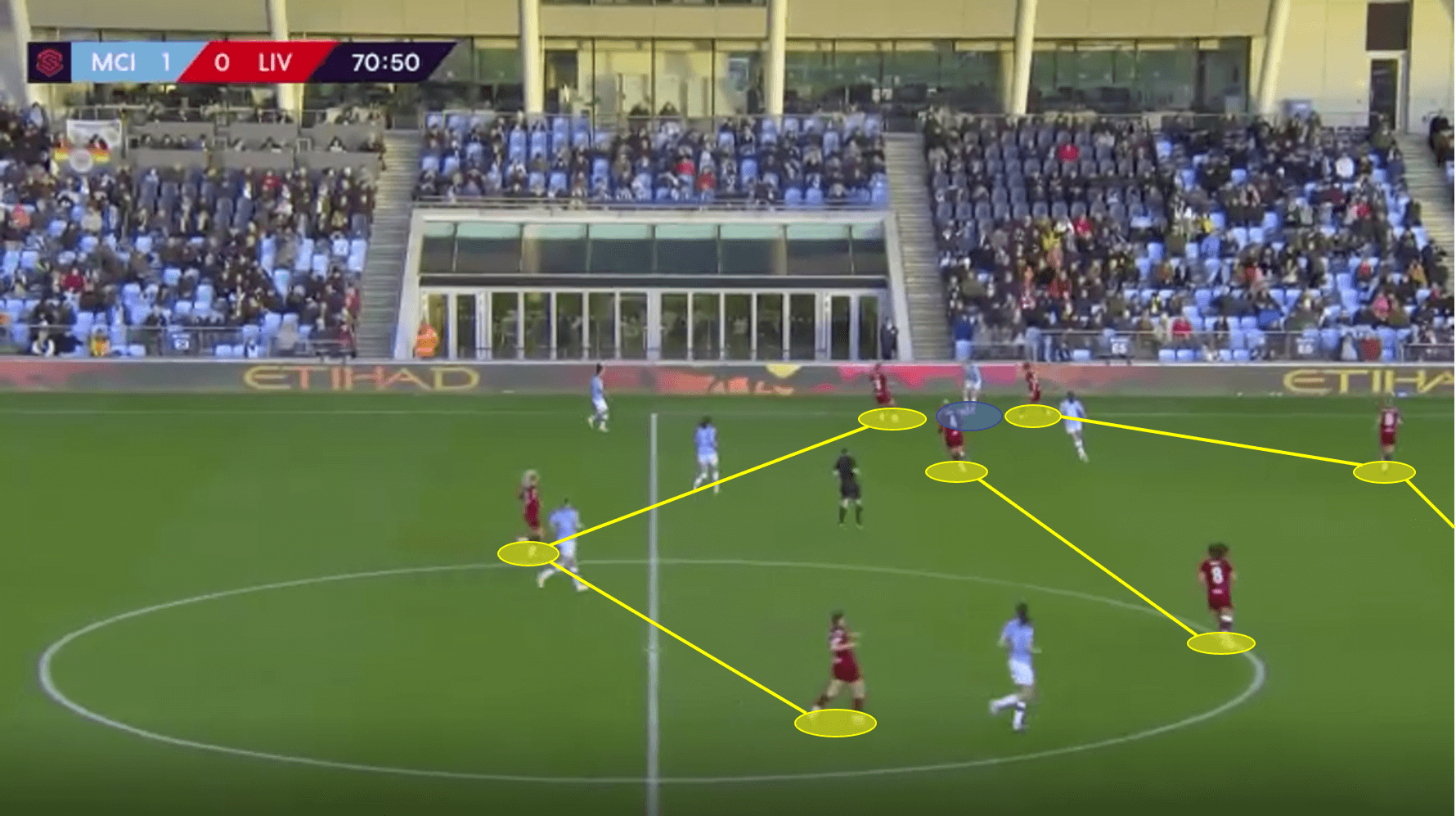 Hemp is pressured from the front, beside and behind. She is left with no option but to play the ball backwards to maintain possession. This eventually leads to a frustrated and unsuccessful cross from Manchester City.

By remaining compact and shifting as a cohesive unit, Liverpool were able to disturb any Manchester City progressions to the attacking third. This led to Manchester City only having four shots on target with the only goal of the match coming from a free-kick.

In the end, Manchester City walked off the pitch with three more points with a 1-0 win. Despite the win, most of the team felt that their performance was lacklustre and took to social media to address that better performances will be needed in the future to win the title. Liverpool return home reflecting on a match that saw them negate the attack of one of the top goal-scoring teams in the league, but fail to create consistent quality chances for themselves.