In just his second game in charge, Achim Beierlorzer was able to pick up another deserved win for a much-changed Mainz side against Eintracht Frankfurt on Monday night in the Bundesliga. With Mainz looking to continue from where they left off in their demolition of Hoffenheim, Mainz used a similar system and it is one which ultimately got the better of Frankfurt’s. In this tactical analysis, I’ll look at Mainz’s new system under Beierlorzer and explain how this was able to exploit Frankfurt’s system, particularly when they were sent down to ten men at the end of the first half.

Mainz lined up in a 3-4-1-2, which switched between a 3-5-2 and a 3-4-3 often, with the midfielders being allowed to move with some freedom in order to create overloads and passing angles. Frankfurt meanwhile used a 3-5-2, which because of how the game went often became a 5-3-2 or a 5-4-1. After Dominik Kohr’s sending off Frankfurt went into a 4-4-1/5-3-1, and as we will touch on in this analysis, suffered as a result of Mainz’s style of play. 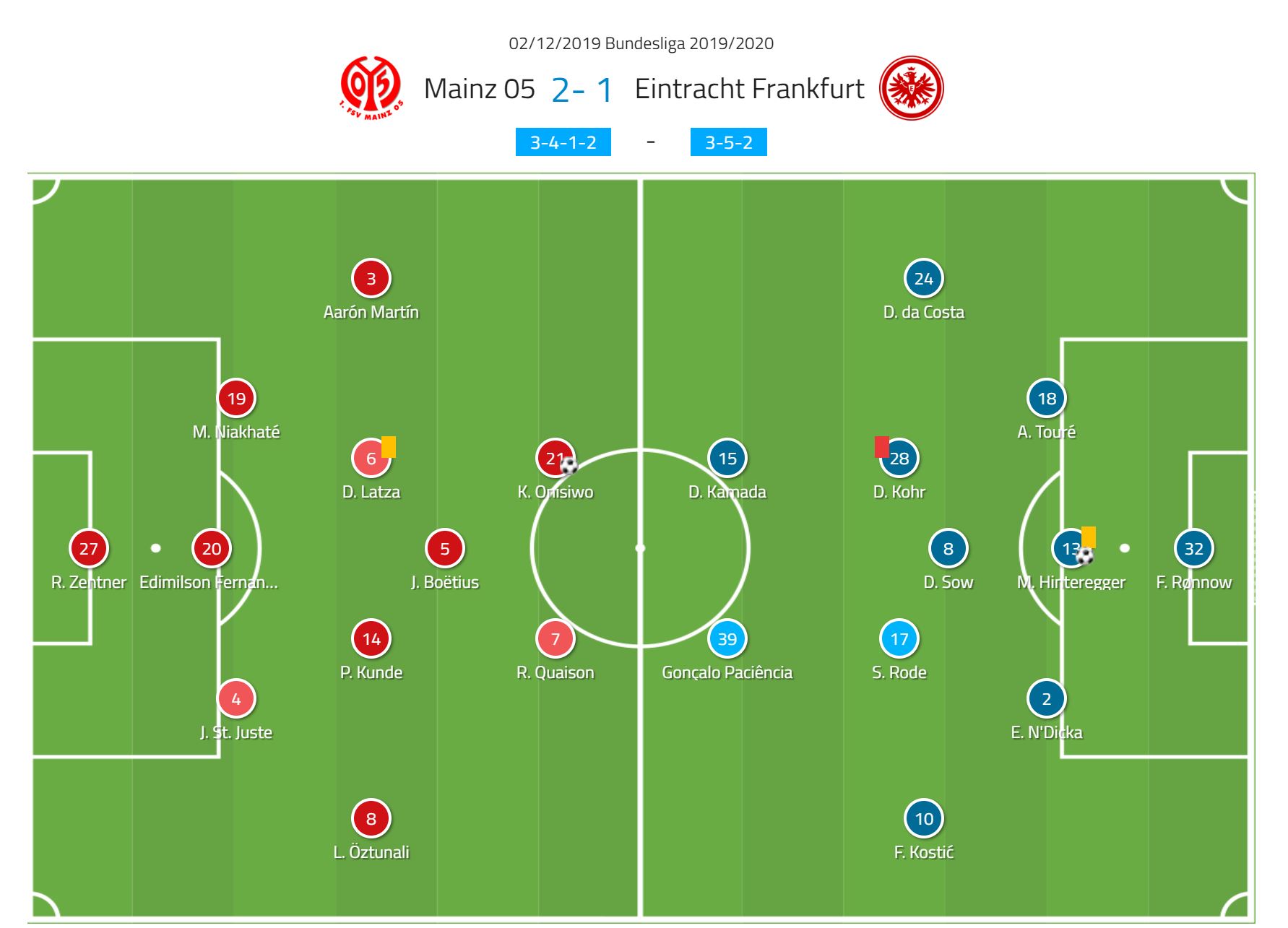 Mainz cause problems in possession

Below are the general structures of both sides in the first half when Mainz were in possession. We can see the obvious space for Mainz was out wide, with the wing-backs being able to drive at each other if the space was conceded and could be exploited quickly enough. 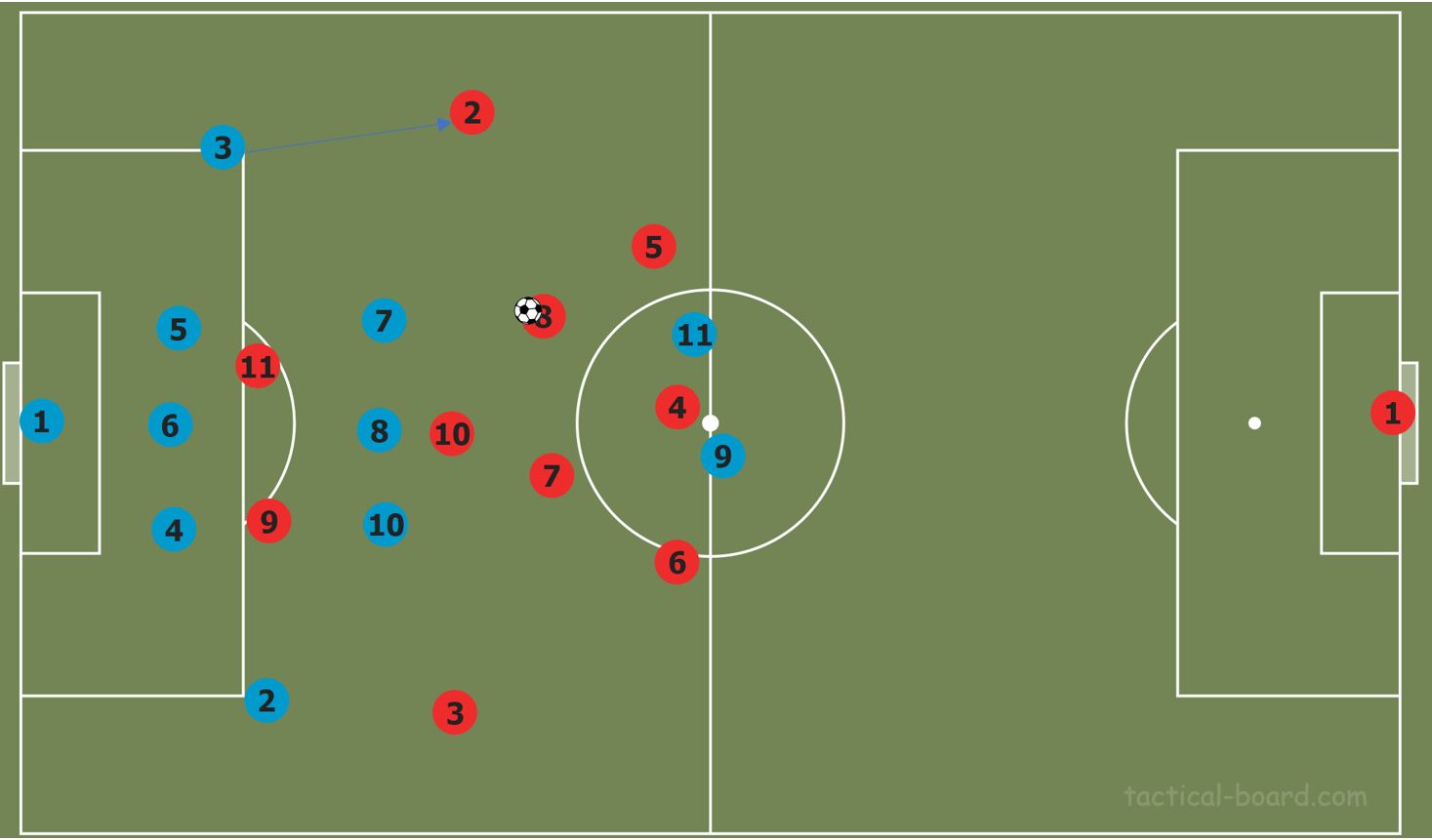 However, Frankfurt were, of course, aware of this and so were prepared to shuffle across and cover spaces quickly, which is one of the benefits of a back five formation- coverage along the backline. However, the movement of the number ten, Jean-Paul Boëtius, was vital in creating problems for Frankfurt as we can see below.

Mainz looked to stretch the play and take advantage of Frankfurt’s man-marking approach in midfield. Boëtius had a fairly free role in the ten, looking to create overloads in various different situations but this was a key one below. Boëtius would drop into this space looking to occupy the widest central midfielder and the wing-back, not allowing the Frankfurt wing back to follow the Mainz wing back into too wide an area and forcing them to protect the middle somewhat. Mainz’s centre backs would also step forward and play, leaving the other Mainz midfielder to also look to pick up spaces where possible.

With the Mainz centre back (number five) on the ball, the central midfielder occupying the ten is forced to press with any support from strikers where possible, therefore the ten can look to find space in behind where possible. The same situation occurs with a switch of play, where a centre back or midfielder can receive the ball and create the same problem. 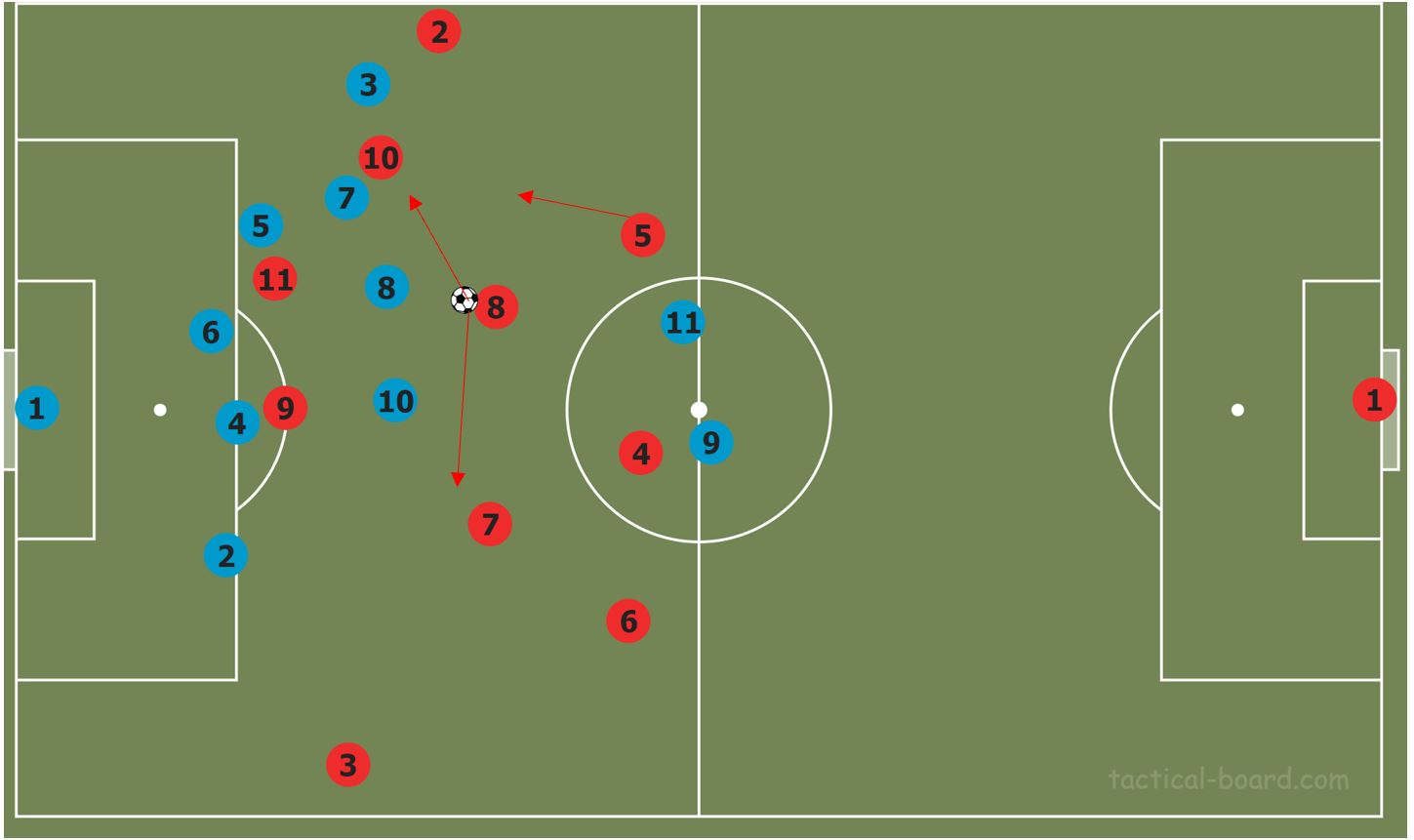 We can see this problem below, with the centre back in possession of the ball following a switch of play. The central midfielder then steps out to press the centre back, and does what is eventually a decent job of using his cover shadow to block the pass into the midfielder behind him. However, the player could probably play that riskier pass in behind if attempted, rather than playing out wide to the wing-back out of shot, who is also guarded by the Frankfurt wing-back. The tempo of the play on this occasion is not quick enough, and Frankfurt can quickly recover and get their central midfielders across, where if Mainz retain possession, they can cause the same problem with a switch of play. Notice how both wing-backs are so wide that they aren’t even in shot, again to increase this space for the midfielder who will enter the half-space.

We can see another example here, which is made slightly different by the asymmetrical positioning of Filip Kostić. Here, rather than sitting with the backline and occupying the very high and wide wing-back, Kostić moves up and gets ready to press the centre back should they receive the ball. This would not usually be too much of an issue for Frankfurt, as the centre back would just shuffle across and cover the wing-back, but a midfielder occupies the centre back as mentioned above several times, and therefore the wing-back is left free. Frankfurt’s midfield don’t get tight enough and don’t cover that passing lane, and Mainz can receive the ball in a dangerous area.

Midfielders within Mainz’s system were therefore required to be flexible and make movements in order to progress the ball forward, which we can see in the examples below.

The two examples of the same position illustrate this fluidity well and show how the movements of the midfielders helped to evade Frankfurt’s man orientated defence.

We can see the situation below, with Boëtius driving from deep while Pierre Kunde offers width and Karim Onisiwo offers height for the ball carrier. Kunde stays wide in order to attract the press of the wing-back, so again the space behind the pressing wing back can be exploited by the movement from inside to out by the wing-back.

We can see almost the same situation here, with Onisiwo dropping into the passing lane between the wing-back and central midfielder, and the wing-back making a run in behind the wide centre back. This overload allows for Mainz to progress the ball forward and deliver crosses into the box, and also because the overload doesn’t involve both strikers, Mainz have options to deliver the ball into.

Sending off makes it more difficult for Frankfurt

Despite the issues they had as highlighted above, Frankfurt didn’t concede and managed to take the lead in the game through a corner. The game didn’t, however, turn on its head after the sending off, instead, Frankfurt’s issues against Mainz’s system were exacerbated.

With Mainz stretching eleven men Frankfurt, they were struggling to get across effectively at times and Mainz would have been fairly pleased with their play, and so when Frankfurt lost Kohr, problems were always going to be caused and Frankfurt were stretched more. As mentioned, after the sending off Frankfurt moved into a 4-4-1/5-3-1, with the difference between the two being the positioning of Kostić. This decreased coverage for Frankfurt had a hand in both goals as we can see below.

Here, we see Boëtius being pressed by Djibril Sow, while Sebastian Rode looks to cover the nearest central midfielder. Jeremiah St. Juste steps forward becoming a midfielder effectively, where usually Kohr would be on hand to press him into a pass wide. However instead there is a large space for St. Juste to receive in due to the absence of Kohr.

Therefore the nearest pressing player is the wing-back, and so St. Juste has the option of playing wide if wanted. He instead aims a low cross/shot, which deflects and ends in a goal for Mainz.

Here, a central defender (Daniel Brosinski) drives forward with the ball and is pressed by the central midfielder. The wing-back pins Kostić in place, and Boëtius looks to receive while marked by the central midfielder. Again though, that next option of a central midfielder is left unoccupied, with Sow switching off and staying with the ball far man. Even if Sow had moved across, Mainz would have still had an extra player across to use and deliver a cross or drive forward. Instead, Kunde drives forward and Mainz eventually breakthrough with a cross from wide.

Overall, it was a deserved win for Mainz in a game that I felt they had the edge in even before the sending off, despite being a goal down. Beierlorzer appears to be implementing his playing philosophy on this side very quickly, and it will be exciting to see how Mainz will improve as their players become more adept at this playing style. Frankfurt had some limited chances on the counter but struggled particularly after the sending off, and perhaps prioritising some coverage across the midfield would have seen them gain a better result, rather than going to a 5-3-1 which saw massive overloads as highlighted throughout this analysis. Mainz fans can be excited again with what seems to be a good appointment of a manager with clear, interesting tactics.