On Sunday Liverpool Women welcomed Everton Women in a Merseyside derby, with the FAWSL fixture being played at Anfield. Over 23,000 attended the game, setting a new record for a Liverpool Women’s game, by over 20,000 more than its predecessor for this game.

Everton ended up pipping the hosts with a 1-0 victory, and jumped up to fourth in the table joining Arsenal, Manchester City and Chelsea in the top four, whilst Liverpool remained marooned at the bottom of the table, still languishing on one point.

This tactical analysis delves into the tactics used by both sides in this FAWSL game.

Liverpool fielded a 4-2-3-1 with both Rhiannon Roberts and Jade Bailey sitting behind Kirsty Linnett who played in the ten role. In attack, both Niamh Charles and Melissa Lawley supported Courtney Sweetman-Kirk, but in defence were expected to drop back and help form a 4-5-1.

Everton lined up in a 4-3-3, but like the home side, dropped into a 4-5-1 in defence. Abbey-Leigh Stringer was instrumental in making this formation tick, dropping into the defensive line during buildup play to start attacks, whilst moving up into midfield as Everton defended to make sure they had a midfield five.

The analysis below highlights the shape Everton most frequently took up when their centre-backs had possession of the ball. As mentioned above, Stringer was vital in their buildup play. 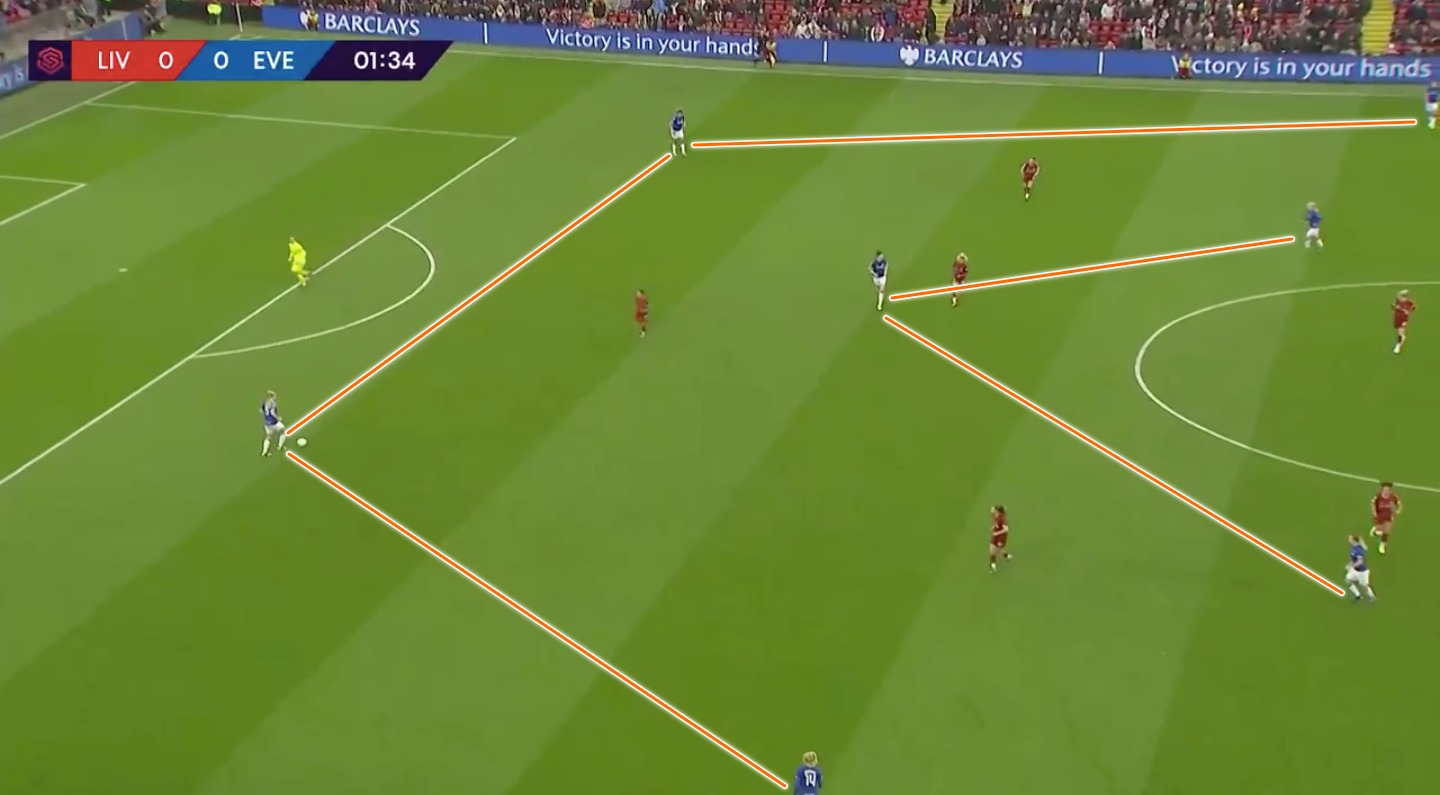 Both the centre-backs split incredibly wide, and this allowed Stringer the freedom to drop very deep. The two Everton wing-backs pushed high and provided the width needed to allow the three Everton central-midfielders the space to play. However, this was when one of the centre-backs was in possession. Without possession, they spread even wider, with the hope that Everton’s goalkeeper, Tinja-Riikka Korpela, could play straight into Stringer.

The image below highlights just how wide Everton’s centre-backs would push without possession of the ball. 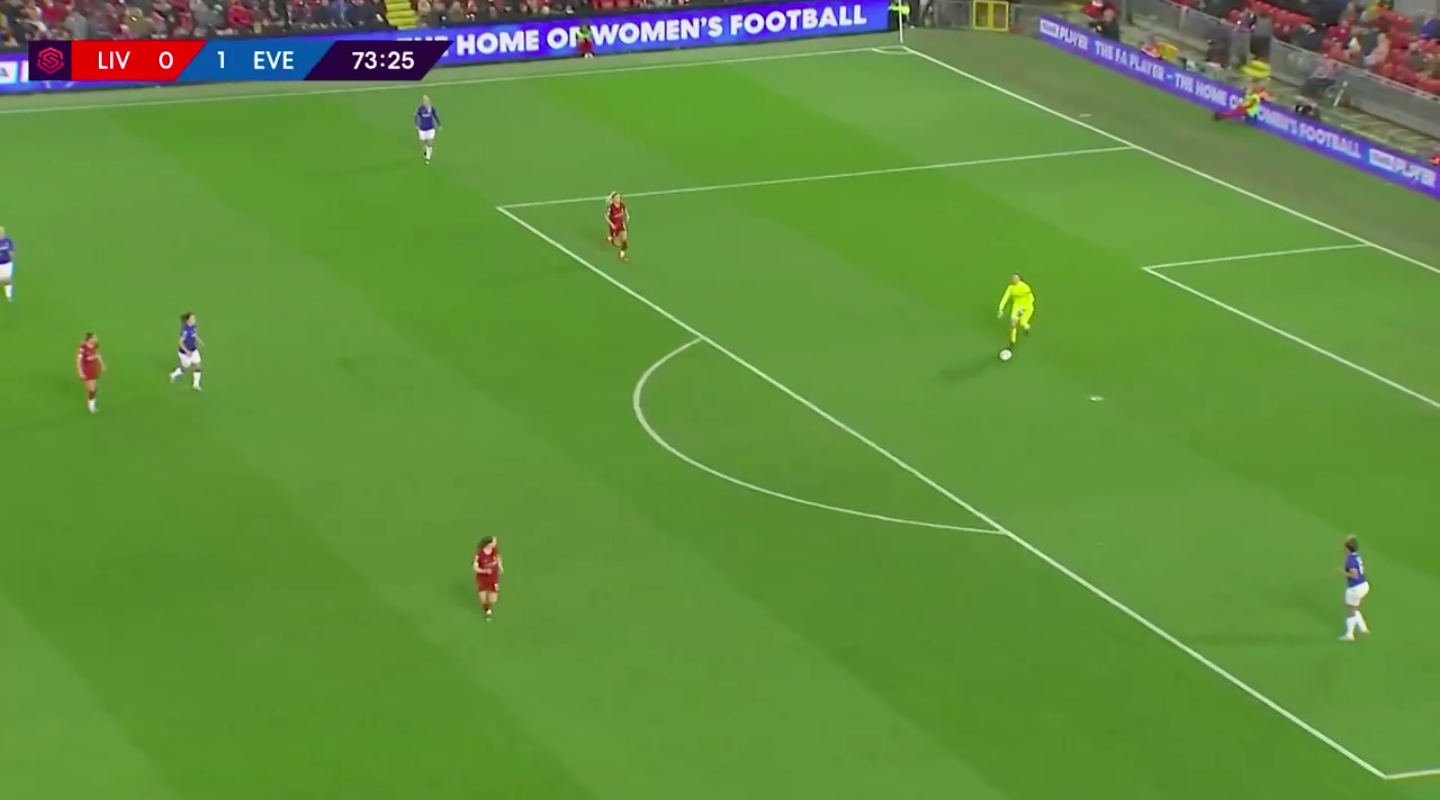 Liverpool responded to this by having Sweetman-Kirk sit high in between both centre-backs, protecting the central passing lane. As soon as the ball was played to one of the centre-backs, she made an effort to curve her run, and block the inside pass into Stringer, ensuring Everton were forced to play down the line. 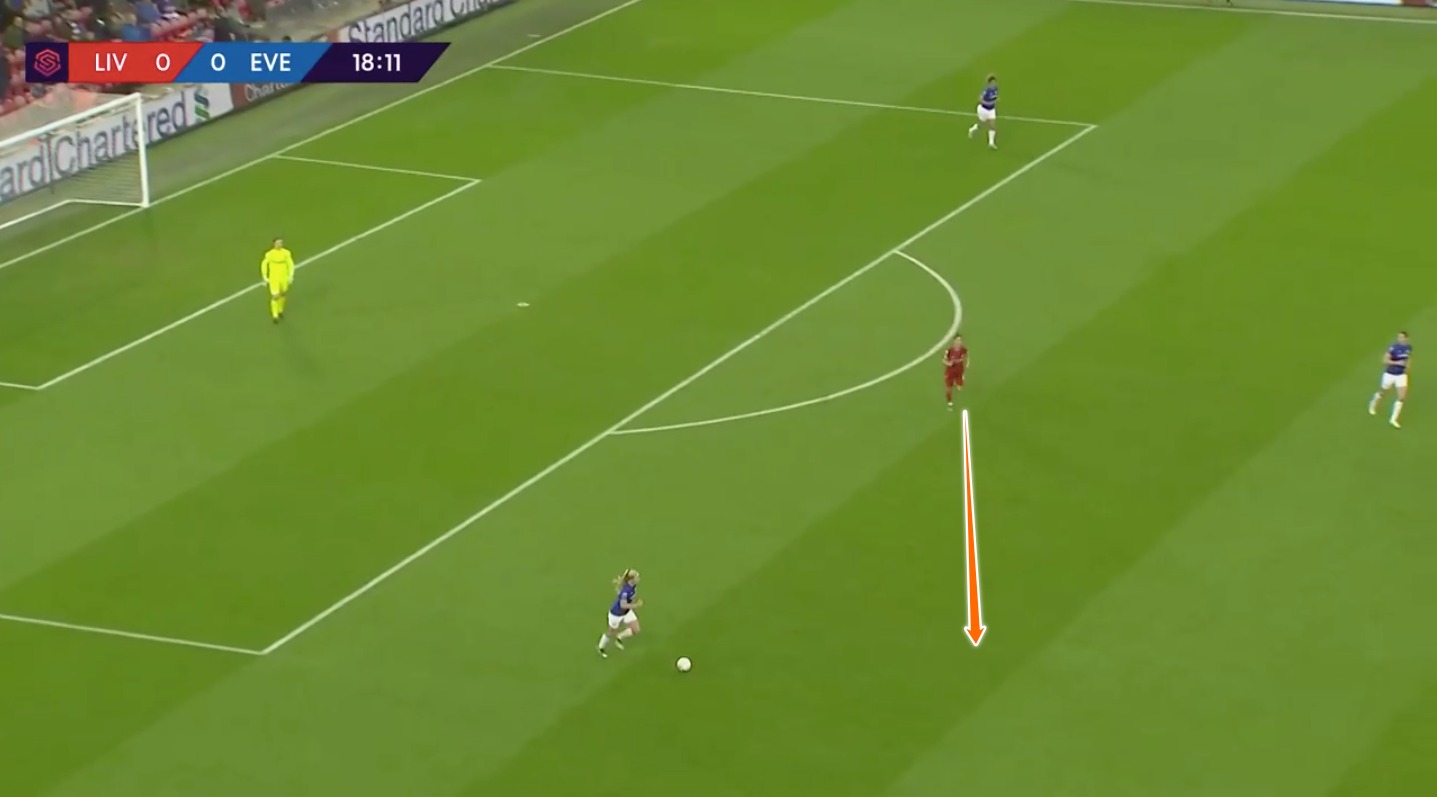 Stringer though was still able to influence the game regardless of this tactical move by Liverpool. With Stringer sitting so deep this opened up pockets which Everton’s centre-backs could play through. Depending on the side Everton were playing down, one of Everton’s front three was able to drop deep and receive the pass through the space created by Everton’s wide midfield.

We can see an example of this below as Chantelle Boye-Hlorkah is picked out by Gabrielle George. Stringer is then able to advance from her deep position and looked to receive from Boye-Hlorkhah in an advanced position.

There is a distinct lack of quality in front of goal in Liverpool’s ranks. This is not a one-off, with the reds only managing one goal so far this season.

There was quality of movement from their forwards too. Simple curved runs off of their marker created enough space for their forwards to receive the ball in behind the Everton backline, and this was an excellent approach, with Liverpool’s forward line not lacking in pace.

However, throughout much of the game, Sweetman-Kirk was left stranded with little support from her midfield. Even when she was picked out with a pass, she was often surrounded by players and unable to link with any of her teammates. We can see below how Liverpool’s midfield is sat deep whilst Sweetman-Kirk occupies Everton’s backline by herself. This prevented Liverpool from penetrating Everton’s backline as much as they should have, with any balls played directly into Sweetman-Kirk from a deep position effectively dealt with by Everton’s defence. 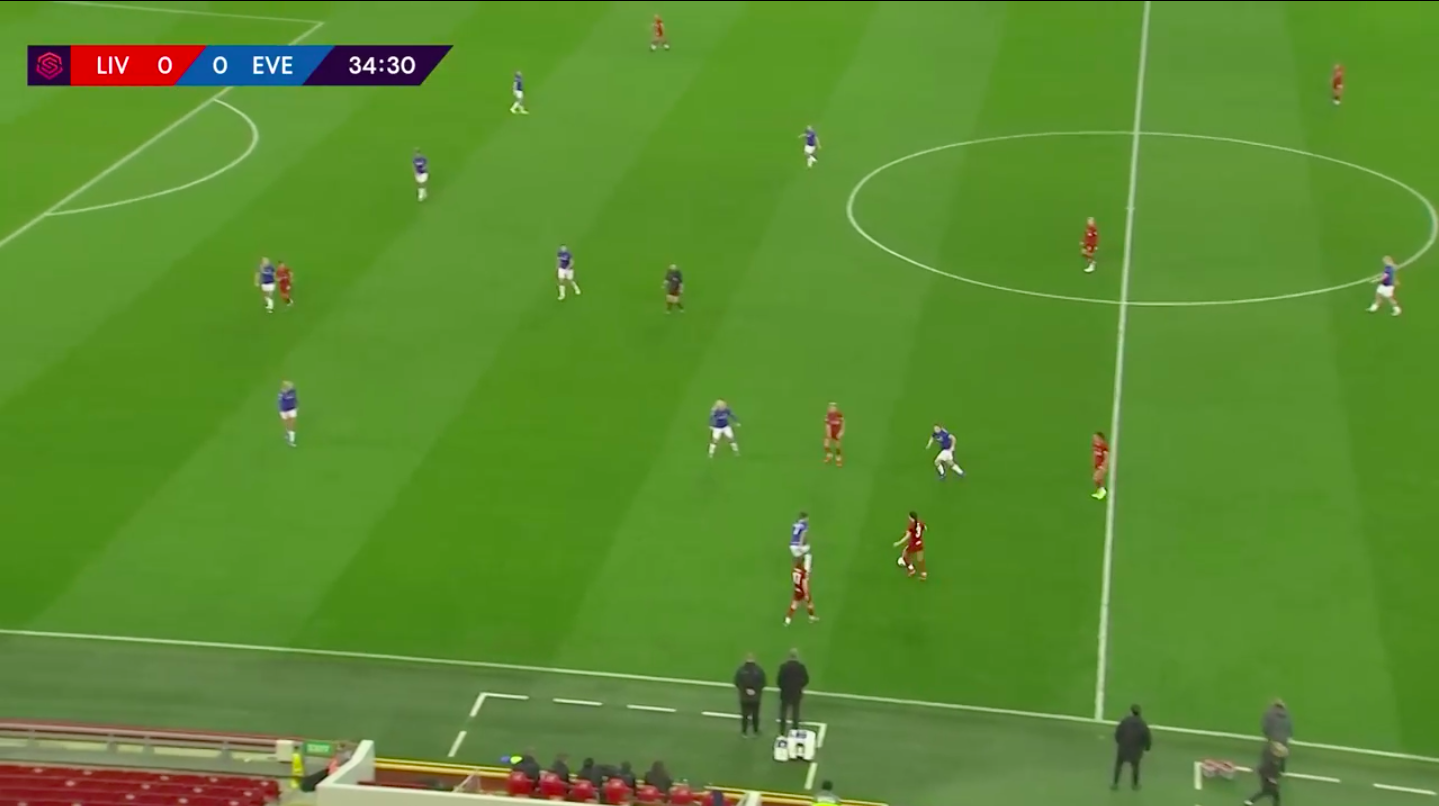 Another issue they had which prevented them from successfully penetrating Everton’s defence was the lack of width they had in attack, often opting to play narrowly in the final third. Below is an example of this with all of Liverpool’s four most attacking players within a ten-yard radius of one another. This allowed Everton’s defence to stay compact which they were more than happy to do. 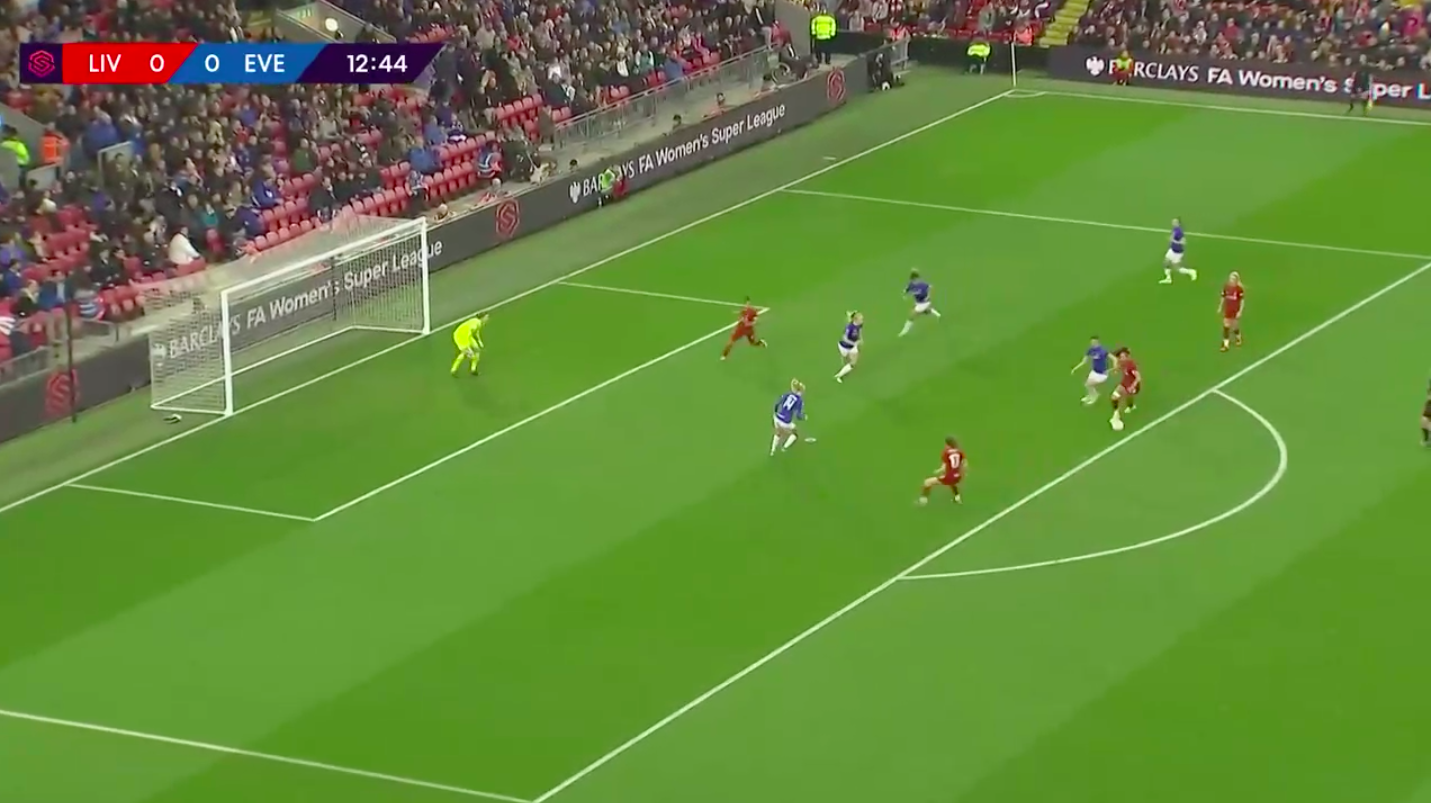 Throughout the game Liverpool continued to attack narrowly and allow Everton’s defence to sit tightly. There was plenty of space out wide for them to use to get behind the defence, as highlighted below, but their wing-backs didn’t push forward to do so. 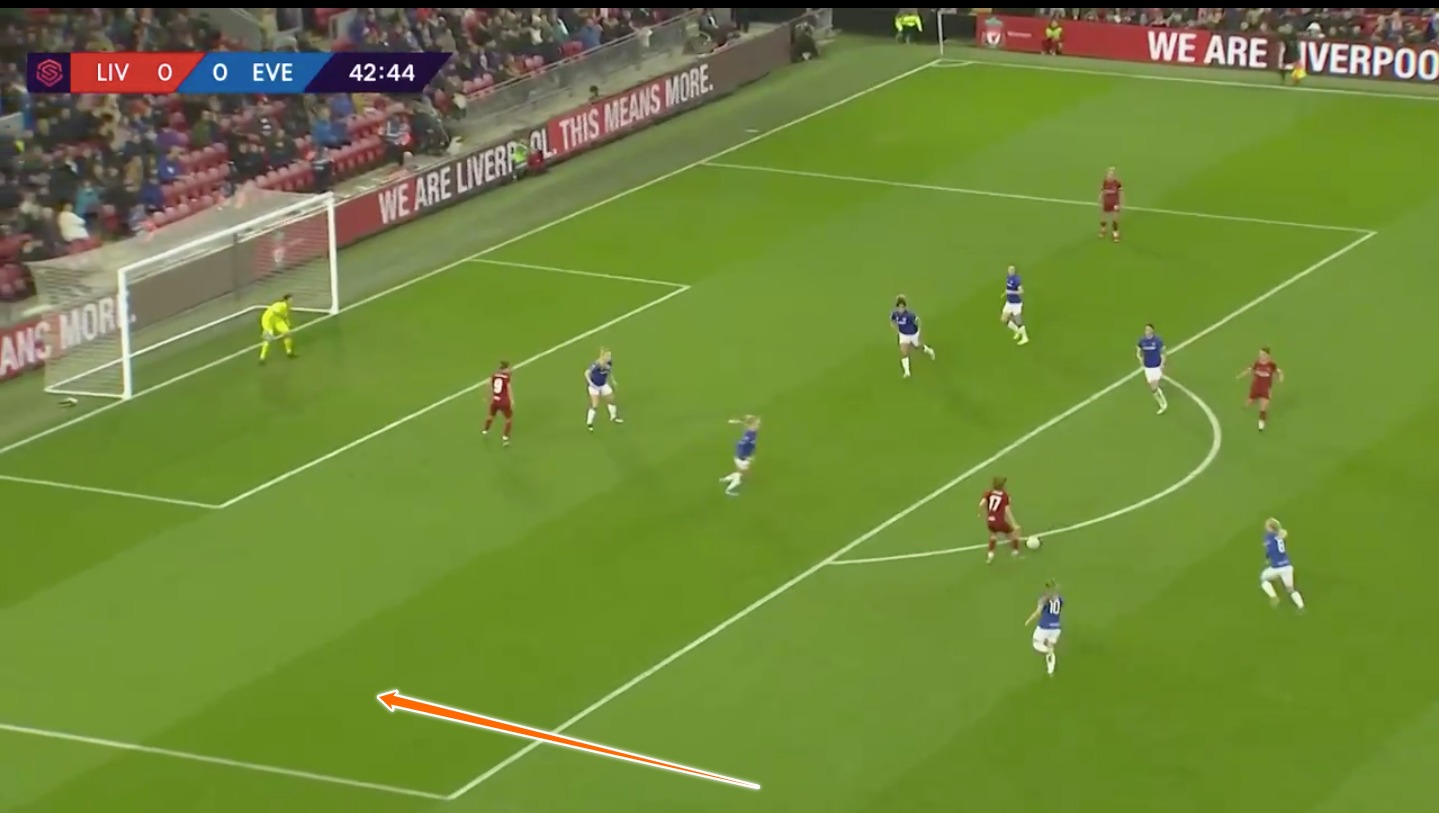 Everton defended well throughout the game, and they had to with Liverpool enjoying the bulk of possession. Liverpool also managed a whopping 21 shots compared to Everton’s 8 efforts. However, the hosts only managed to get two of these efforts on target, highlighting what an excellent job the Everton backline did. They were disciplined throughout, sitting in a 4-2-3-1 formation, and staying compact, looking to stop the reds from playing through them. This compact defence prevented Liverpool from getting clear shots away from goal, with many of their efforts coming from distance. 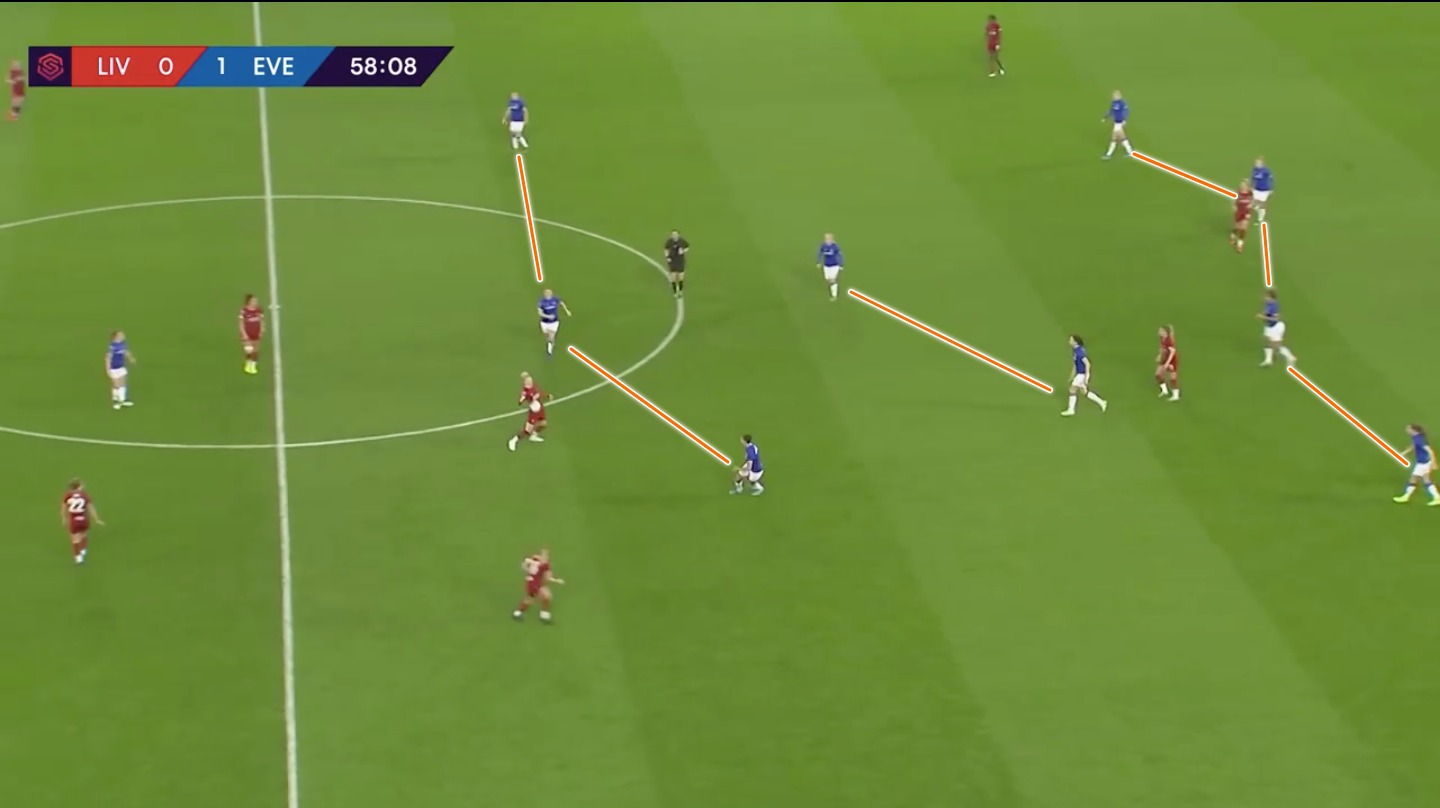 Everton defended from the front with a high press, putting Liverpool’s defence under pressure, seeking to win the ball back as early as possible.  They dropped into a 4-5-1 with one of their midfield five supporting Elise Hughes in the press as we can see below. 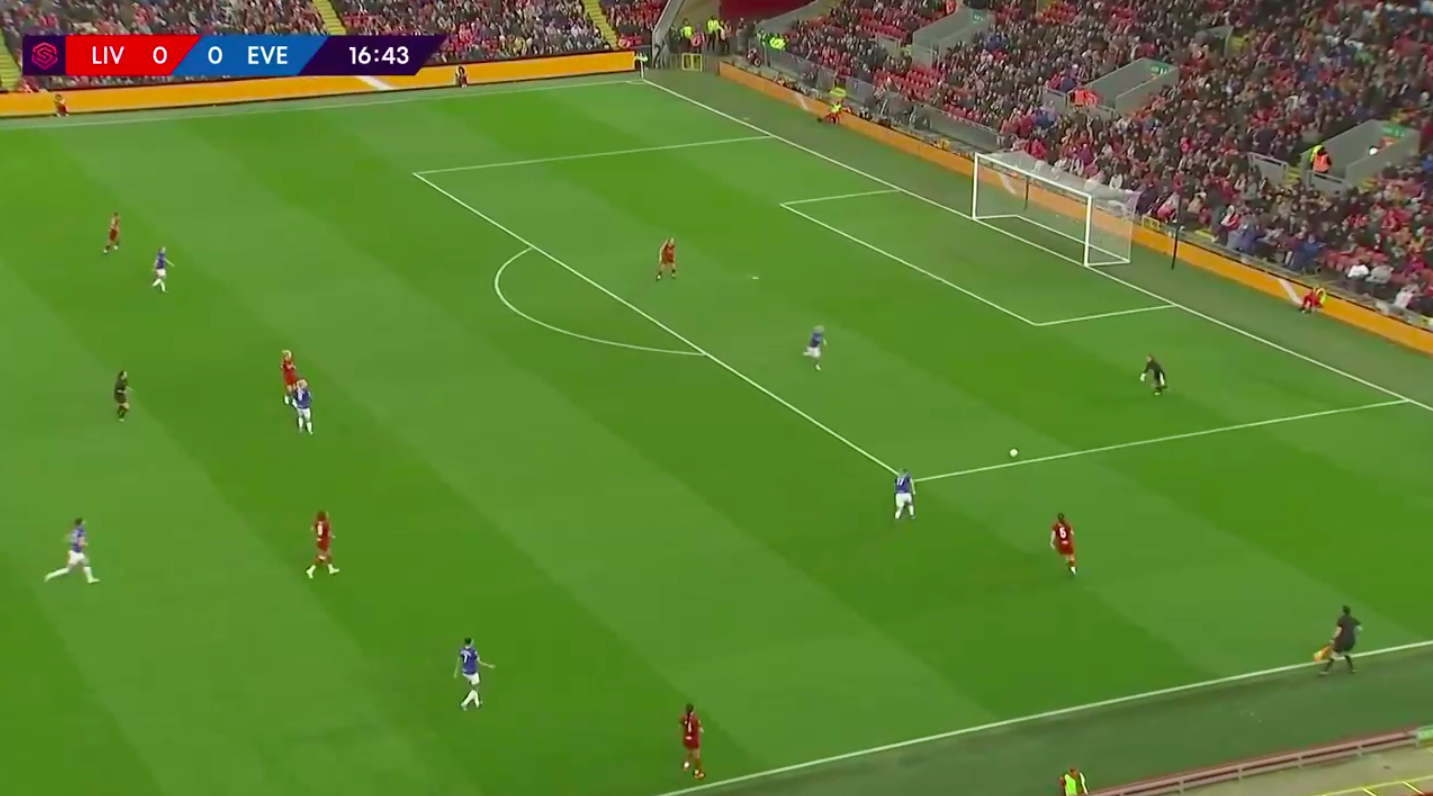 Everton were incredibly effective in transition from attack into defence with their front line and wing-backs in particular quick to drop deep and ensure their defence became narrow and compact as quick as possible.

I have highlighted Danielle Turner and Hughes below, with Turner, the left-back, taking a high position on the left-side to provide Everton width in attack, whilst Hughes sits in the middle of the front three. 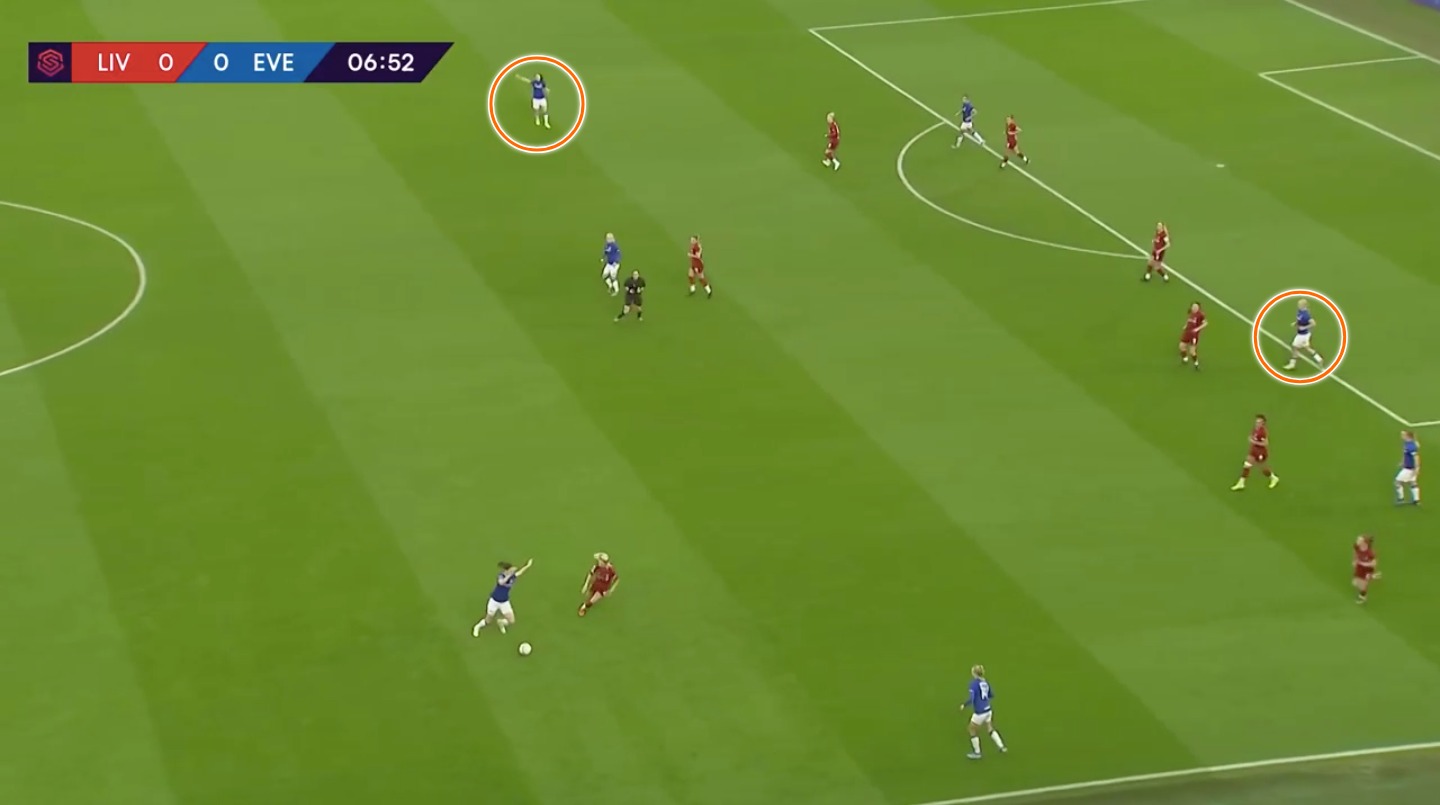 As soon as the ball has been lost Everton shifted as an entire unit to drop back quickly and transition into a narrow, compact shape. Despite being one of Everton’s furthest forward players, Turner quickly transitions into one of their deepest defenders, moving behind George who goes to press the ball and win back possession. Hughes and her two forward teammates drop deep too, one we can see that she is under 20 yards away from centre-back George as she wins back the ball.

This defensive cohesiveness was key for Everton throughout as they successfully pressed Liverpool quickly throughout the game to continually win back the ball swiftly after losing it themselves. 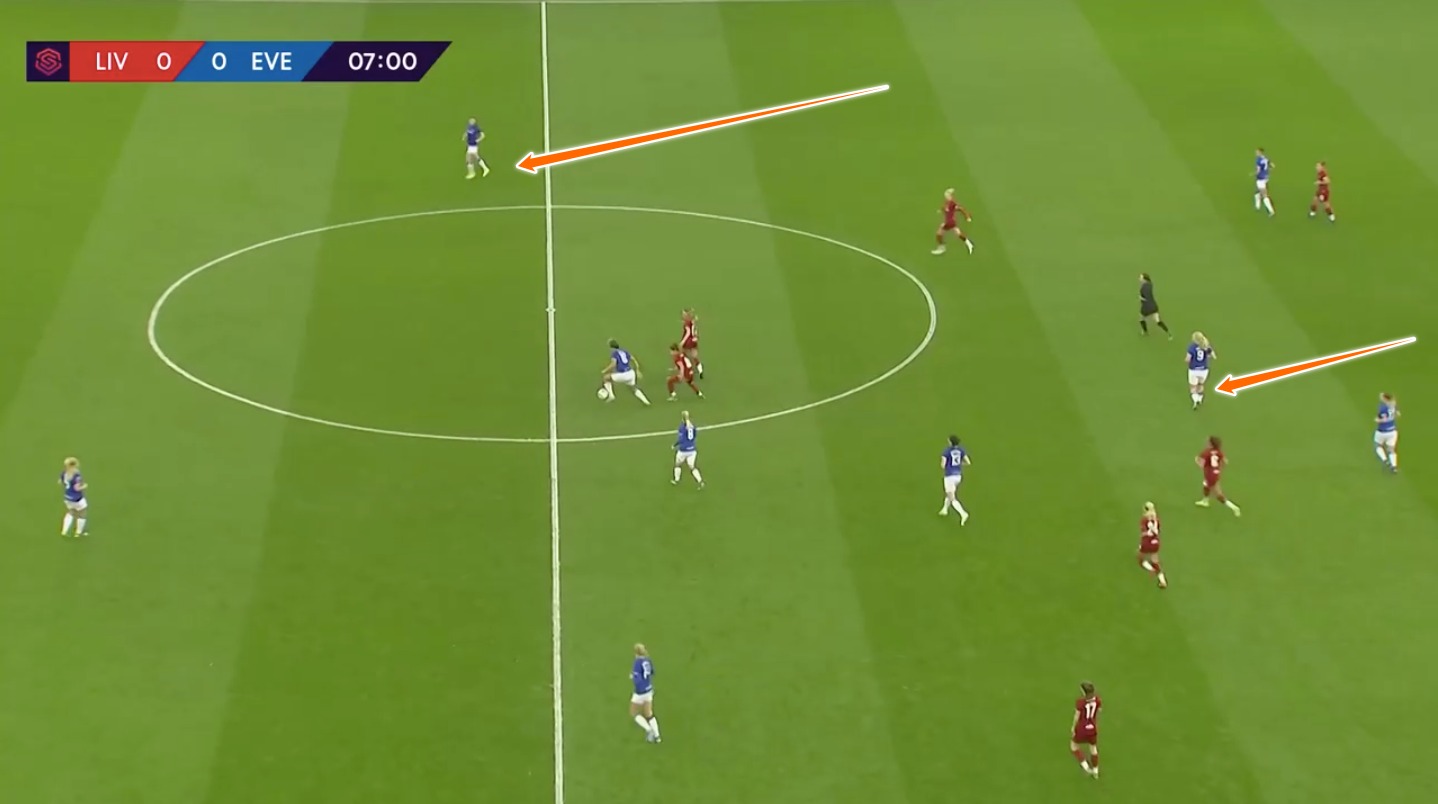 A glance at the table would suggest that Liverpool are in trouble this season, with only one point now from their first six games, and a minus-seven goal difference. However, there were positives for them to take from this game. Their buildup play throughout was encouraging with Roberts in particular influential throughout the game in helping them launch attacks. They also created a lot of chances, even if many of these were speculative efforts. Regardless, managing 21 shots on goal in any game is a feat in itself, and if it wasn’t for a magnificent save from Everton goalkeeper Korpela they would have scored.

Everton were disciplined and well-organized throughout and ensured many of Liverpool’s 21 efforts on goal were from areas they were unlikely to score from. Lucy Graham’s goal in the 46th minute, wouldn’t have fone in had it not been for Liverpool goalkeeper Anke Preuß dropping what should have been a routine save, and despite their defensive efforts, should still count themselves lucky to walk away from this game with three points.