The Friday game from this Bundesliga round took us to the Signal Iduna Park for the game between Borussia Dortmund and Eintracht Frankfurt. Dortmund was looking to get back on track after their defeat in the spectacular game against Bayer Leverkusen, while Eintracht Frankfurt wanted to carry on their best form after the 5:0 win in the game against Augsburg. In this game, Borussia Dortmund dominated from start to finish and gave Frankfurt no chance. The good (counter) attacks, in combination with the solid defensive structure, lead to a 4:0 victory for Dortmund.

In this tactical analysis, we take a look at Dortmund’s attacking structure, especially the role of the wingbacks and the positional freedom for Sancho and Hazard. Furthermore, we analyse Eintracht Frankfurt’s struggles in defence during the first half. The article also includes an analysis of Frankfurt’s formation change after the break. Lastly, we take a look at Dortmund’s successful defensive tactics. Time to take a closer look at the line-ups. 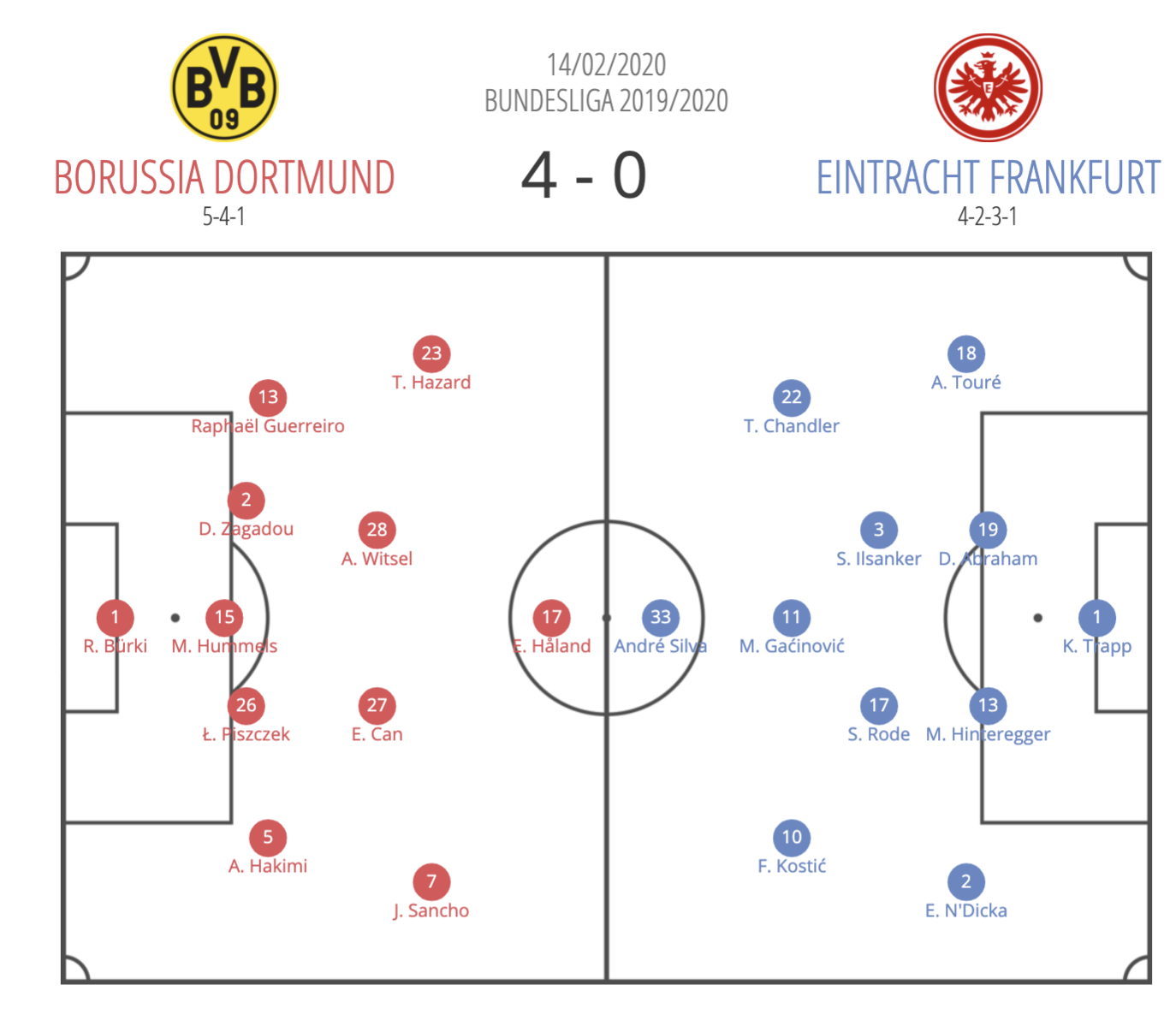 Lucien Favre made some tactical changes to his side. First of all, Dortmund’s head coach decided to make a change in the formation. Instead of using a 4-2-3-1 formation as they did against Leverkusen, Borussia Dortmund started the game in a 5-4-1 formation. Favre also made some changes in his personnel. Manuel Akanji was left on the bench while Julian Brandt suffered an ankle sprain in the game against Leverkusen. As a result, Thorgan Hazard and Łukasz Piszczek were in the starting eleven.

Adolf Hütter didn’t change too much for this game against Dortmund. Just like they did in their last game, Eintracht Frankfurt started in a 4-2-3-1 formation. Hütter only made one change to his starting eleven. Dominik Kohr was left out of the squad. Sebastian Rode started in his place.

As we saw in the section above, Borussia Dortmund used a 5-4-1 set-up for this game. This set-up changed when Dortmund was in attack. The wide midfielders left the flanks and positioned themselves much higher up the pitch. The role of the wingbacks, however, was very dynamic. Especially Raphaël Guerreiro had an interesting role in the build-up phase. Instead of constantly functioning as a wide midfielder in the attack, he sometimes dropped back to function as a left-back. As a result, Dortmund sometimes had a back four instead of a back three when attacking.

The analysis beneath is an example of how Guerreiro dropped back to support his centre backs. In this example, Mats Hummels had the ball. At that moment, Guerreiro dropped back to position himself at the line of his back three. Right centre back Piszczek positioned himself on the right flank, while Achraf Hakimi positioned himself higher up the pitch.

Positional freedom for Sancho and Hazard

As noted in the section above, Sancho and Hazard positioned themselves high up the pitch during the attack. The wide players left the flank and positioned themselves in the centre of the pitch. In that area, the two players had the freedom to roam around. Dortmund used these tactics to pull apart Frankfurt’s defensive structure.

In the analysis beneath, we can see how Dortmund used this tactic. Hummels had the ball. Axel Witsel recognised that he could lure Gaćinović out of position, which would open up space for Emre Can. Witsel went a little to the right, after which Gaćinović followed him. The space opened up, and Hummels played the ball towards Can.

Frankfurt started to recognize this tactic and changed their way of pressing. One of the two holding midfielders would support Gaćinović to create a two versus two situation for Dortmund’s holding midfielders. This, however, was still no solution to the problem. Dortmund was still able to play through Frankfurt’s press after this change. One of the ways was through finding the free wingback. Dortmund lured Frankfurt’s wingers to press one of their centre backs, after which they immediately played the ball to the free wingback.

The analysis beneath is an example of this pattern. Piszczek had the ball and attracted the attention of Kostić. Frankfurt’s winger started to press, after which Piszczek played the ball back to Hummels. Instead of staying in position, Kostić kept pressing. As a result, this opened up space for Dortmund to find the free Hakimi.

Dortmund was also able to play through Frankfurt’s defensive structure by using a dropped back winger. In the analysis beneath, we can see that Dan-Axel Zagadou had the ball. Sancho recognised that Frankfurt flanked both Dortmund’s holding midfielders, so the winger decided to drop back and offer support. Zagadou recognised the space and played the ball to Sancho. 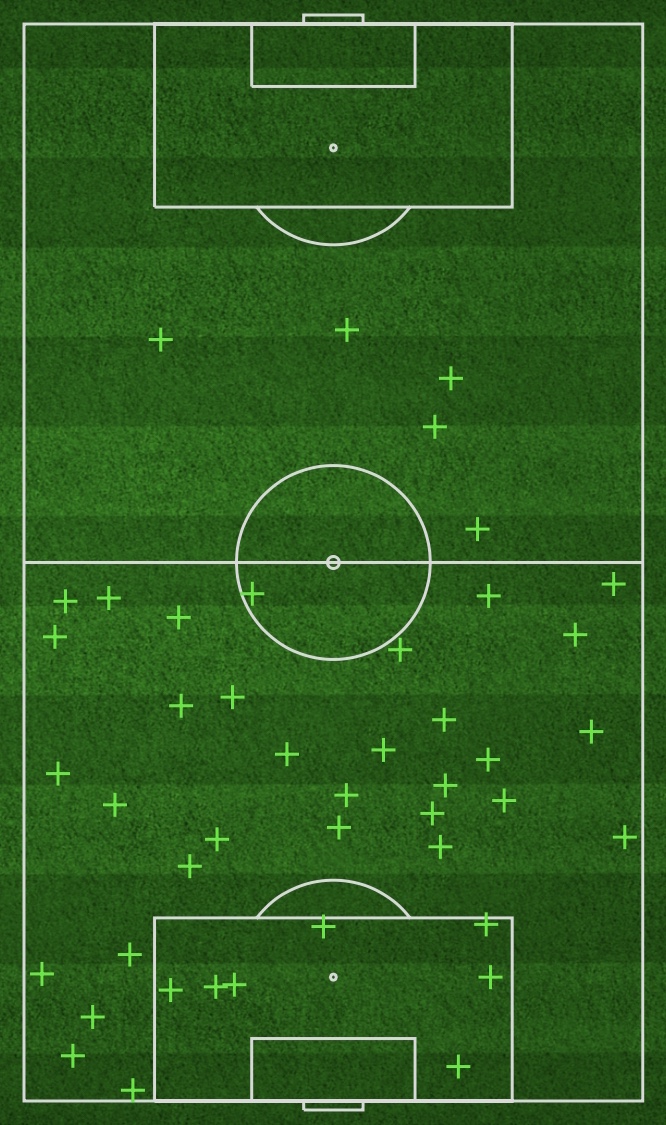 Hütter recognized that Frankfurt struggled during the first half and wanted to make some changes. Instead of keeping their 4-2-3-1 structure, the head coach decided to line his team up in a 4-4-2 / 4-2-2-2 formation for the second half. Hütter hoped that this change would make it harder for Dortmund to find the free player in the build-up phase.

The analysis above shows the change of tactics by Eintracht Frankfurt. We can see that they have two holding midfielders, while the wide midfielders position themselves high up the pitch. The two strikers flank each other in the centre of the pitch.

Despite the best intentions, the tactical change from Eintracht Frankfurt didn’t lead to the result Hütter wanted. The change in the set-up mainly led to extra problems, especially in the transition phase. This was due to the positioning of Frankfurt’s players in attack. In the analysis beneath we can see that Frankfurt’s right centre mid, Stefan Ilsanker, had the ball. Frankfurt’s other centre mid, Rode, positioned himself on the other side of the pitch. As a result, Frankfurt left the centre of the pitch wide open. Ilsanker lost possession, after which Dortmund could play on the counter.

A comparable situation resulted in the 3:0 for Borussia Dortmund. As we can see in the picture beneath, Frankfurt lost possession after which Dortmund played a fast counter-attack. Again, Frankfurt left the centre of the pitch wide open. This time around, Dortmund punished Frankfurt for it.

Dortmund’s defensive organization was on point during the game against Eintracht Frankfurt. Favre his side gave no chances away, which resulted in a comfortable win. Dortmund was able to do this, through creating a numerical superiority around the ball at their half. As a result, Frankfurt struggled to find the free player and as a result, struggled to create any chance.

In the analysis beneath, we can see how Dortmund put this principle into practice. Frankfurt tried to attack Dortmund’s left flank. On that flank, Dortmund created an eight against five situation. As a result of this defensive organization, Frankfurt lost possession.

The result of this solid defensive structure was that almost every Frankfurt attack stopped somewhere around the midway line. As we can see in the pass map beneath, there are almost no successful passes from Frankfurt on Dortmund’s half. This resulted in an exceptionally low xG value for Eintracht Frankfurt (0,04).

Borussia Dortmund dominated the game from start to finish. They were able to play Frankfurt’s defensive structure constantly. Favre will be pleased with how Sancho and Hazard filled in their roles and disorganized Frankfurt’s defensive structure. However, the head coach will especially be pleased with the defensive display from his team. His side only gave one shot away, which went way wide. As a result, Borussia Dortmund stays close to the top spot of the Bundesliga.

Eintracht Frankfurt will take some lessons from this game. Hütter will go back to the drawing board and think of a way to stop a team that plays with three at the back. Furthermore, he will try to get back the good spirit as Frankfurt faces Red Bull Salzburg next Thursday.