Bundesliga 2019/20: Why Eintracht Frankfurt have struggled this season – scout report

Eintracht Frankfurt had an excellent season last year, finishing seventh in the Bundesliga, whilst barely missing out on a Europa League final, losing on penalties to eventual winners Chelsea in the semi-final. They seemed to continue from where they left-off at the end of last season with an excellent start to the 2019/20 campaign, and at the beginning of November found themselves on 17 points, level with RB Leipzig. However, their win away at Hoffenheim last weekend was their first league win since their 5-1 win against Bayern Munich on the second of November, and they have only managed four points since then. So what is going on at Frankfurt and should head coach Adi Hütter be concerned for his job? This tactical analysis and scout report looks at their tactics and why they have struggled this season.

When did it start going wrong?

After beating Bayern Munich 5-1 at the beginning of November and putting the nail in ex-head coach Niko Kovac’s coffin, Eintracht Frankfurt were in excellent form and looked capable of another excellent season. But eight games later they are now on just four more points than they were, with 21 points, and concerningly have lost to the teams that are now placed around them, like Hertha Berlin, Paderborn and FC Köln.

For the first ten games of the season they were averaging 2.1 goals a game and conceding 1.5. In the eight games since they are conceding just under two goals a game, with 15 in total, and scoring exactly one a game, with eight scored. When you’re conceding less than you’re scoring over a prolonged period of time that is clearly going to cause problems, and although last week’s win propelled them up to 11th in the table, they are far from out of the woods.

Is this a case of not replacing Luka Jović, Sébastien Haller and Ante Rebić?

The signings this summer were underwhelming to say the least, and they haven’t been able to replace the firepower they lost. To bring in André Silva and Bas Dost, baring in mind the high sums received for selling the duo of Haller, and Jović, production levels upfront were naturally going to decrease. Dost has five goals in 11 games which isn’t horrendous, but he won’t get close to Jović’s total from last season, and possibly not Haller either (and he certainly won’t contribute as much creatively as Haller)

There has been criticism from some parts regarding the recruitment process that went into Dost. He isn’t particularly mobile or dynamic, and isn’t a natural fit for Hütter’s pressing system. The signing felt very rushed at the time and it would appear that that was the case. He is not a similar player to Haller other than the fact he is tall and good in the air.

André Silva has three goals in 10 games and his goalscoring record over the past two seasons at Sevilla and AC Milan didn’t suggest he was going to come in and be someone who could replace the outgoing attacking talent with consistent goals.

Gonçalo Paciência has shown potential, and has scored 10 goals this season in all competitions, however, he has been inconsistent and if they choose to play one up top, I’m not convinced whether he could effectively lead the line by himself as Dost did last weekend. But with the correct partner, Paciência could be a consistent contributor to this side.

The below statistics show the differences between the forwards in the following metrics, clockwise from the top: goals per 90, shots per 90, shots on target %, goal conversion %, touches in box per 90, assists per 90, key passes per 90, pass %, dribbles per 90, dribble success %, losses index, and received long passes per 90.

Has goalscoring been an issue? And what does their xG say about their finishing?

Six of their goals have come from Martin Hinteregger, who is of course a centre-back, and as good as he is aerially, it’s a concern that they are relying so heavily on set-pieces.

What is more concerning with regards to the shyness in front of goal is that Frankfurt have been getting into good positions and they have been taking shots.

They rank in the top five in the league for passes into the final third and their completion percentage on these passes.

Only four teams have taken more touches inside the opposition box than Frankfurt, and only Bayern Munich and RB Leipzig have taken more shots than them this season. However, Frankfurt hit the target on 36.5% of these attempts which is below the league average of 37.9%. They also take just under six shots per game from outside of the box, which is a lot.

They’ve also conceded 15 goals in the last eight games, but their xGA for these games has been 10.91 so it’s fair to say they probably shouldn’t be where they are in the table right now, in fact Wyscout has them sitting as high as seventh place in their expected points table. 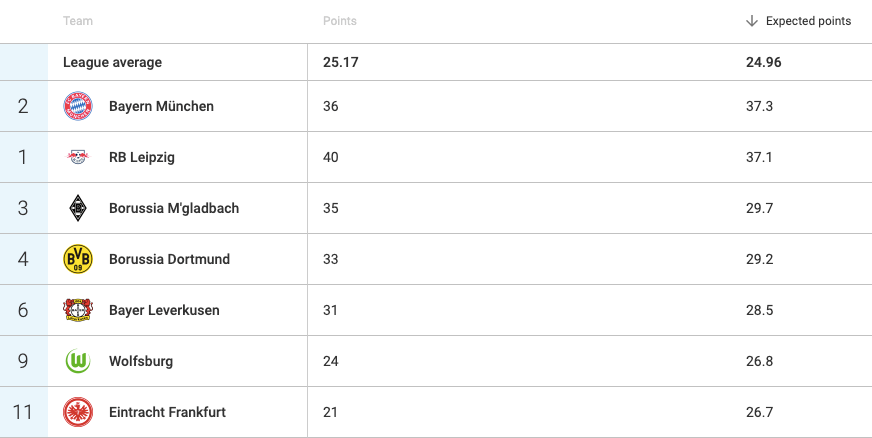 Nevertheless, despite being in sixth place in the league for xG, they are 15th for xG per shot, with only Paderborn, Mainz, and Fortuna Dusseldorf with lower.

An overview of how they set up under Hütter 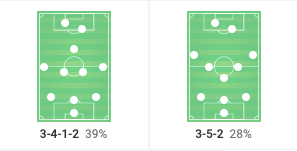 They generally prefer to play a 3-4-1-2 as they did for much of last season, although have used four at the back at times too. Hütter clearly still isn’t sure at this point of his best XI which is a concern. Playing in the 10 role behind the front two they have gone with Daichi Kamada who has great energy, as well as Mijat Gaćinović who played there so much last season, and Sebastian Rode in the same role, without anyone quite claiming the role. There has been a lack of creativity from central areas, perhaps due to their commitment playing from the flanks, however, they average just under six through passes per game, which ranks them 15th in the league.

When building up from the back their buildup play has looked laborious at times. It can be slow and predictable, in fact, they average 12.8 passes per minute which makes them the 17th lowest in the league for that metric. On top of this, they play a lot of long passes from the back, and average 53 long passes per game, the third-most in the league.

When playing Dost they use him as a target player and will look to play off of him. Whether that’s to use him as a way to relieve pressure and get the ball forward, or to break the midfield lines and bypass the midfield by playing straight into him, Dost certainly has his uses.

Their long passes aren’t necessarily just into a target player though. If they do play from defence into central midfield they will do so looking to bring the opposition press forward in order to play behind the defence and allow their quick wing-backs or number 10 to exploit the space on the break.

Defensively Hütter has continued to have them operate with a high press, as they did last season. However, it has been said their new front three aren’t as built for recreating the exact same press as they used with Jović, Haller and Rebić but the impact has been minimal. Yet they have averaged a 9.32 PPDA, where last season it was 9.52. They also have an impressive 62.3% defensive duel win percentage, the fourth highest in the league.

Despite the loss of their three key players last summer, they managed to keep one of their elite attacking talents around, in Kostić. He is used as a left-wing back but is arguably their most important attacking player.

Much has been said of teams being over-reliant on crossing and it perhaps not being a particularly effective form of attack, yet Frankfurt were really successful from wide areas in the first ten games. They scored 21 goals and 10 of these came from crosses, whilst three goals came from corners. They rely heavily on crossing and are averaging over 20 per game. Only Bayern Munich take more crosses than them. Their cross accuracy in the league is 34% accurate, which is ok but isn’t spectacular. They have also had 57 shots from headers which is the most in the league, and 20 more than the league average.

So much of their attacking play focuses on getting the ball into either Kostić or Danny Da Costa on either flank, and progressing the ball through numerical overloads on the wings, playing the ball into space behind the opposition full-backs for these two to run onto, or using their pace, particularly in the case of Kostić, to counter from.

But goals have dried up from wide areas. Timothy Chandler’s goal this weekend was their first goal from a cross in open play in seven games, which bearing in mind they are making more than 20 crosses per game, shows they are being wasteful with the ball in the final third. Five of their goals in this time have come from corners. So the lack of goals from open play is a serious concern for them.

Kostić takes the second-most crosses per 90 minutes in Europe’s top five leagues with 7.99 per game. His 32.6% completion on these crosses is ok if not outstanding. He could benefit from better cross selection. He’s got six assists, but his assist last weekend for Timothy Chandler’s winner against Hoffenheim was his first from a cross in open play all season.

He is an accomplished dribbler and has a 55.6% completion which is excellent, particularly as he averages 8.49 per game. He has attempted the most dribbles in the league by far, with 40 more than Jadon Sancho.

However, a lot of the time he uses this talent to aid in transition, rather than using it to beat the full-back. Bearing in mind he averages over eight dribbles per game, only 2.8 of these come in areas deeper than the oppositions 18-yard box. If he is in a 1v1 situation, he so often looks to hit the line rather than use his pace to cut in front of the full-back and opt to pull the ball back for the onrushing forwards. The thicker arrow in the analysis below shows the route he chose to take in this example. 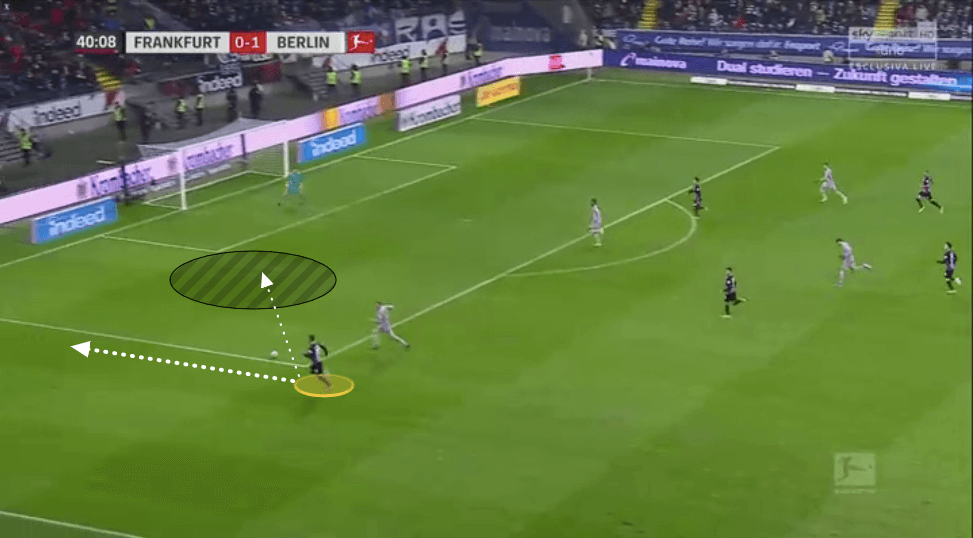 He also needs to look at his shot selection. He has taken 53 shots in the league this season, the fourth-most in the bundesliga, but has scored just once and hit the target with just 30% of them.

The majority of evidence points towards Eintracht Frankfurt perhaps being a little unlucky to be where they are. However, there is nevertheless a trend of over-reliance on a one-dimensional attacking approach, and poor recruitment in attacking players and poor shot selection from their attackers has led to them not scoring as many as they should have.

Last year they were terrific, and finished seventh, with an xG differential of just +0.04, whereas this year it’s 0.16. With a little more luck in the second half of the season there’s a good chance they will pull away from the lower reaches of the table.