Apart from losses of Real Madrid and Barcelona, there was another La Liga team knocked out in the latest round of the Copa del Rey. Mirandes successfully kicked three first division teams out in their epic trip in this competition. Before the game, Celta Vigo and Sevilla had already failed to challenge the team at Anduva. This time, it was Villarreal being knocked out.

In this tactical analysis, we will show you how Mirandes beat Villarreal. It is an analysis that focuses on tactics.

Mirandés’ manager Andoni Iraola played the exact team as he did in the previous week. Their second-top scorer Marcos André was still on the bench; another familiar name, Iñigo Vicente, also appeared on the substitute list. In this match, Matheus Aias started the game as a lone striker with Martín Merquelanz, Álvaro Peña and Álvaro Rey behind him. They played in a 4-2-3-1 formation.

Javier Calleja started a strong team which played in a 4-1-4-1 formation. The keyman, Santi Cazorla, partnered Vincente Iborra and André Anguissa in midfield. New signing Paco Alcácer was on the bench with another striker, Carlos Bacca. That position was filled by Gerard Moreno in the starting XI.

The attack of Villarreal

Villarreal tried to keep the ball in the first phase of the attack, looking for chances to play out from the back if they could. They had 59.04% of possession and 511 passes in this game. Last round, Sevilla completely lost the midfield battle in terms of number. Therefore, Villarreal tried to avoid this situation by dropping Anguissa deeper into the middle of the pitch.

Below we can see his heatmap. He always appeared between zone eight and nine and tended to drop deeper instead of moving upward. It seemed Calleja instructed the Cameroonian to defend more instead of joining the attack.

As a sole pivot, Iborra dropped between the centre-backs while Anguissa dropped at the centre of the midfield to fill those spaces. Although he was still marked by Antonio Sánchez, his presence still created another layer for Villarreal’s build-up.

Although Iborra played 20 minutes more than Anguissa, the former only had two more passes (47 vs 45). 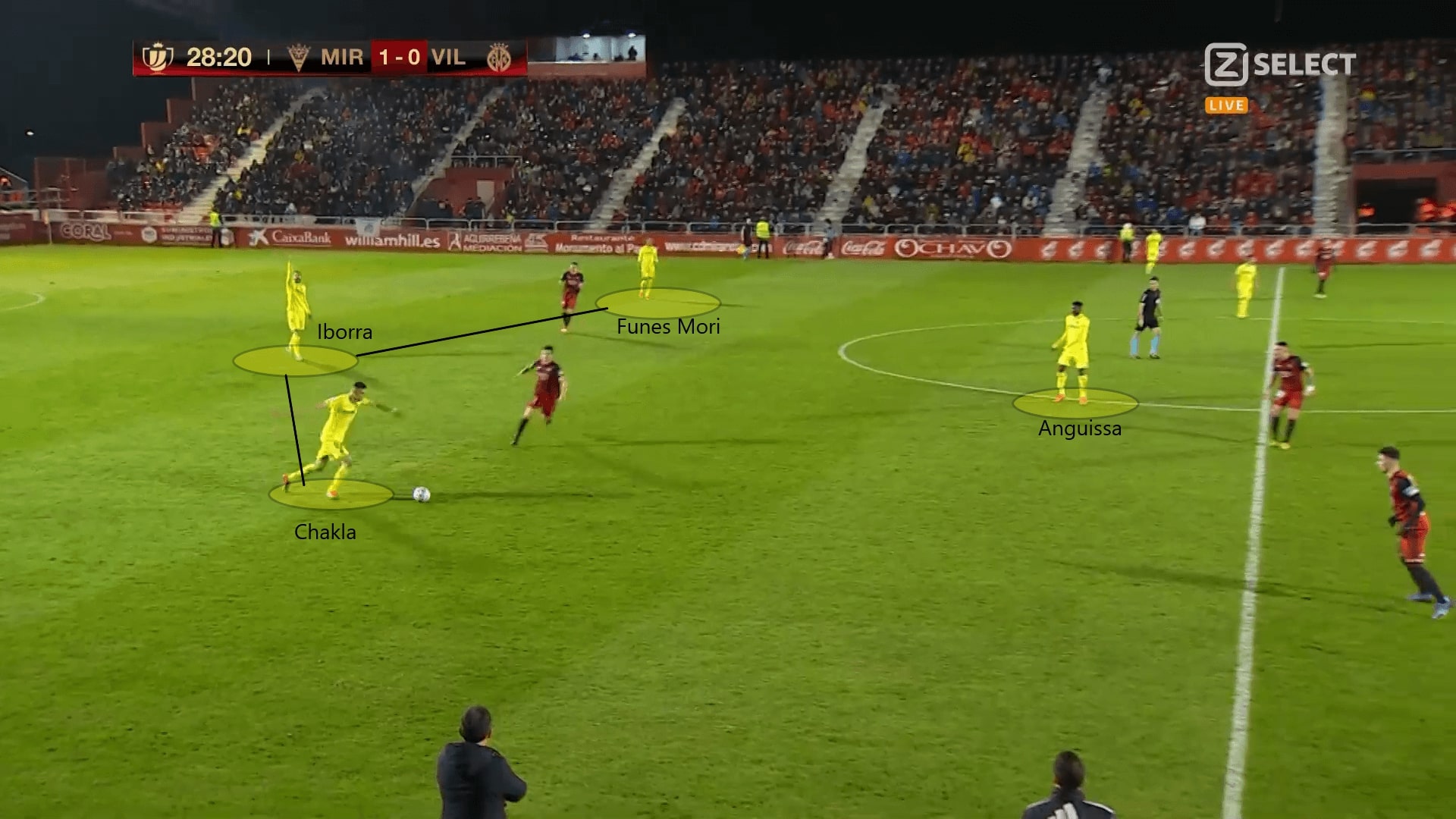 The instructions to Anguissa were not only focused on attacking. Instead, they affected the defence of Villarreal as well. Since the team pushed Mario Gaspar, the right-back, high to provide the width, the Spaniard needed cover.

Therefore, Anguissa seldom arrived in the box and instead stayed slightly deeper. Of course, the intention of his positioning was to cover the spaces behind the right-back. However, in terms of covering the passing lanes and spaces, Anguissa’s performance was far from satisfactory, as we will explain below. 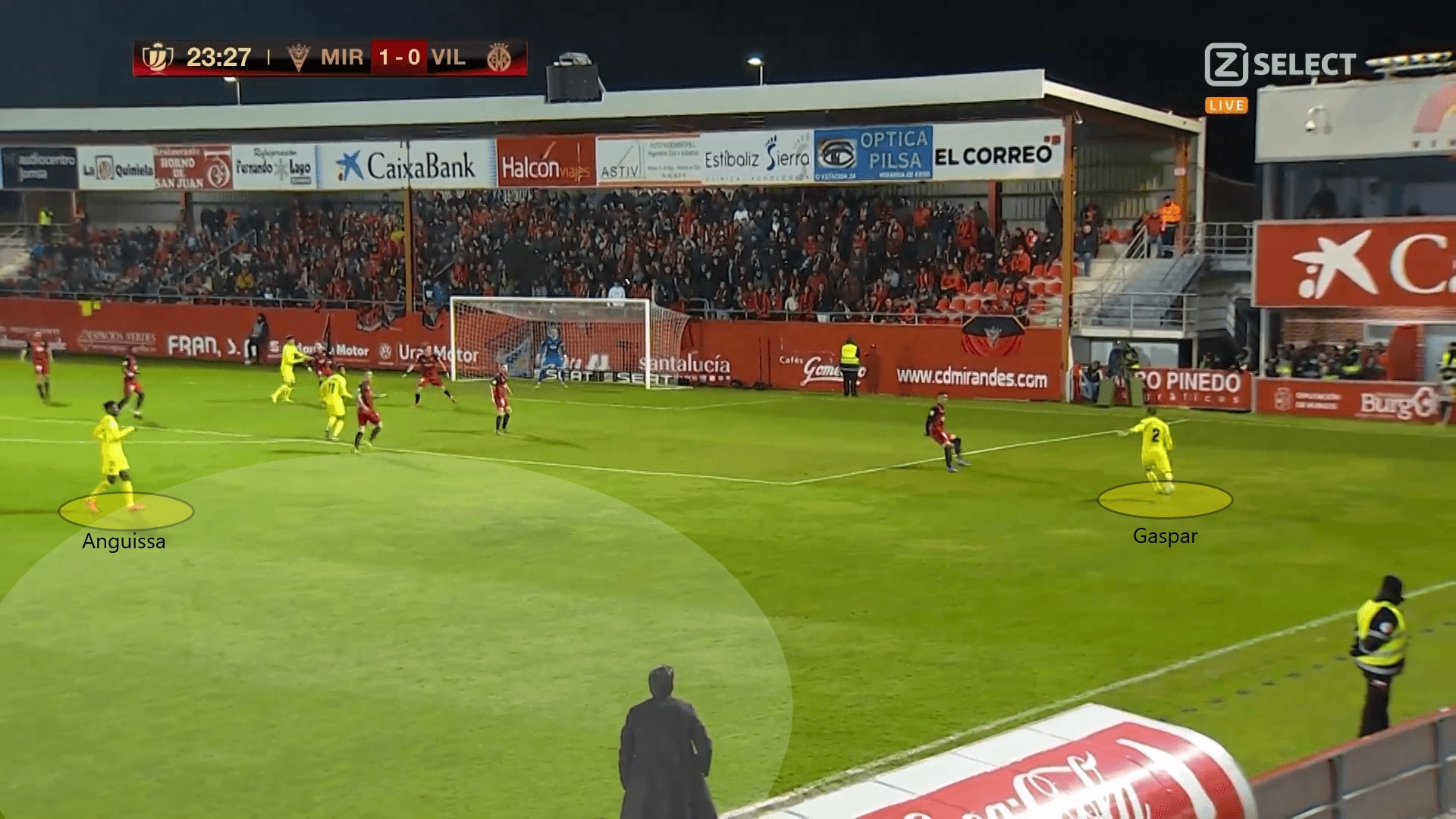 It was better if Villarreal penetrated at the centre to find Cazorla but that was not what they always tried to do. Compared to Anguissa, Cazorla stayed in an advanced position, exploiting spaces between the lines.

If Villarreal could find Cazorla between the lines, they would put the Mirandés pivots behind the attack.

For example, in this situation, Xavi Quintillà found the former Arsenal man and since Sánchez was marking Anguissa at that time, he was too far to make an interception as the pass was threaded between him and his teammate. 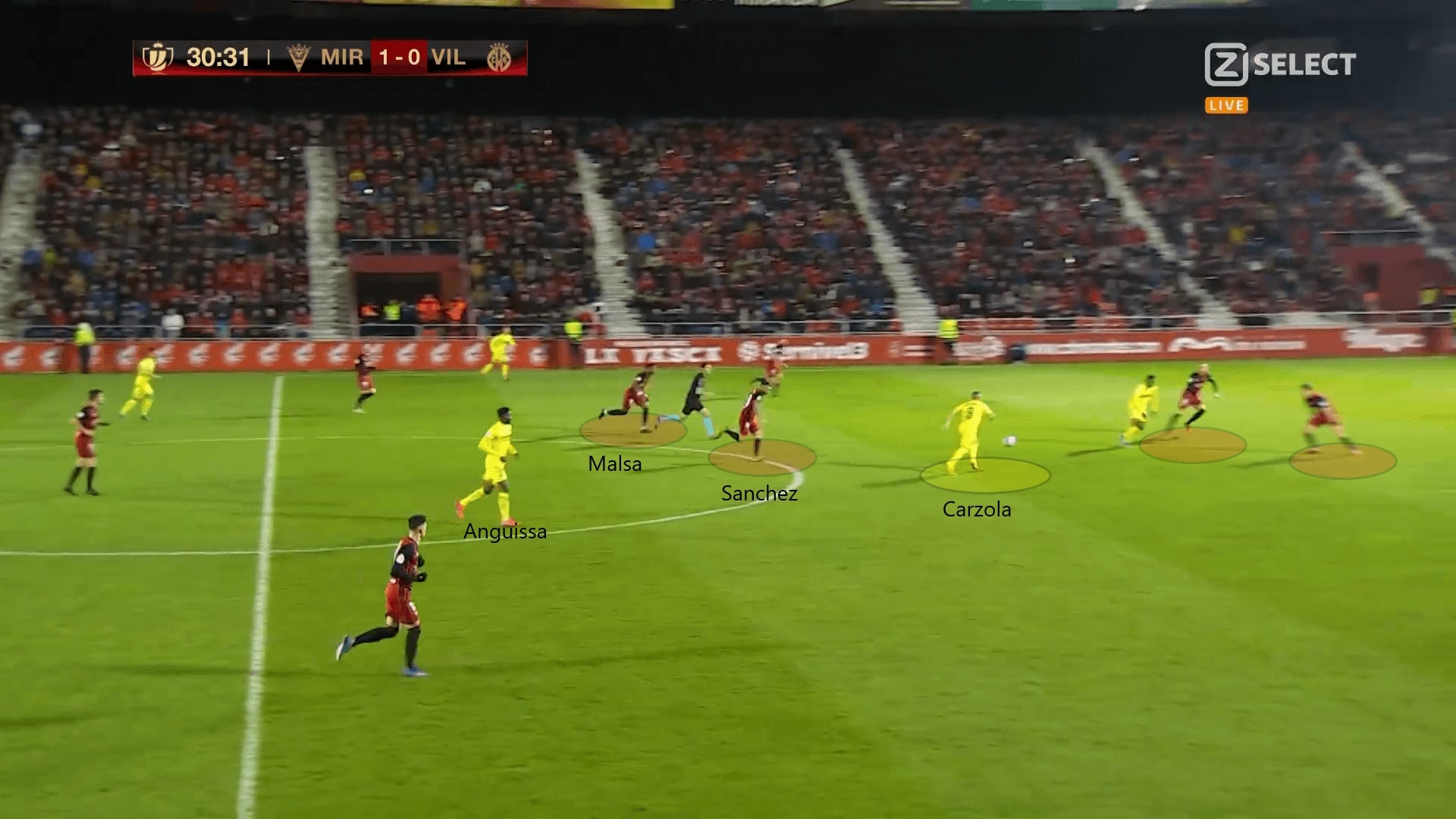 Another outlet to appear between the lines was Moreno. The striker also dropped into the midfield to provide an option to progress the ball.

As he dropped to receive the pass from Iborra, he also took the home team centre-back Odei Onaidia with him. It created a gap between Mirandés’ left-back and centre-back. However, the problem was, there weren’t any yellow shirts running to exploit those spaces.

The only option of Moreno was Javi Ontiveros and they were the only players involved in this attack. Therefore, it was easy for Mirandés’ front players to regroup and defend in numbers against the two. 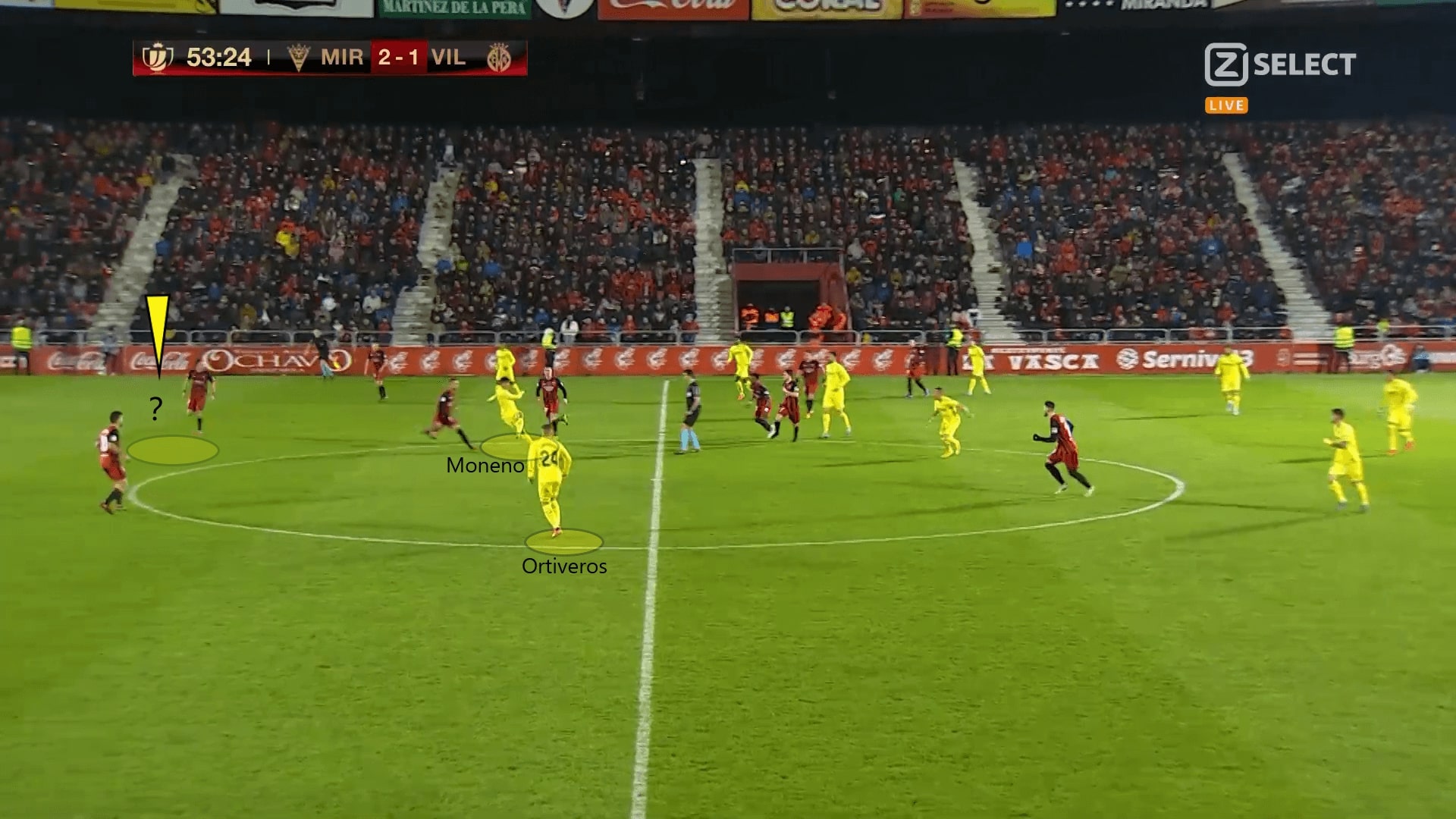 Villarreal’s attacking approach was okay although there were flaws which we illustrated above. They had an xG of 1.32 in this match. However, again, Mirandés’ press was well-planned for the game. They made it very difficult for Villarreal to play out from the back.

As they did in the Sevilla game, they pressed strategically to interrupt the build-up of the opposition. An important element in their press remained the same as they marked the central midfielders tightly.

In this match, Iborra was Villarreal’s sole pivot and the attacking midfielder of Mirandés, Peña, was tasked to mark him.

When pressing high, Aias and a winger on the far side also moved to the ball side. For the former, he could chase any return pass; for the far side winger, he positioned himself at the centre to occupy those spaces. In this situation, it was Merquelanz.

In the following image, Rey marked the left-back of Villarreal and if a yellow shirt dropped on the side, full-backs of Mirandés would follow, as Alexander González did in this case. 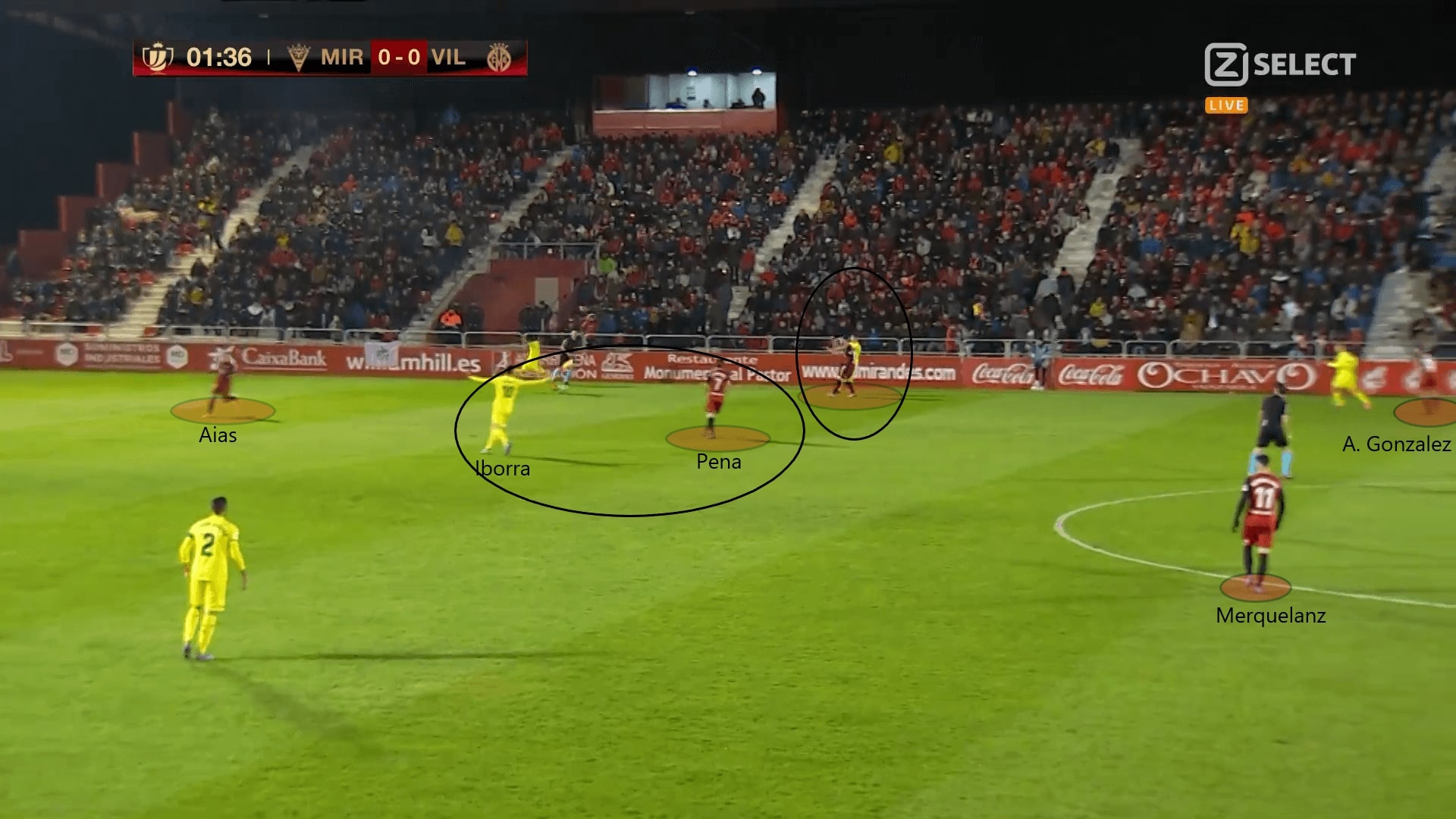 Both teams had three central midfielders so they could perfectly fit and man-mark each other. Therefore, when Anguissa dropped, Sánchez would mark him. When the winger on the far side stayed in the centre, close to the midfielders, they surrounded the midfield with numbers.

In this situation, Peña did his job – he covered Iborra and made him unavailable for a pass. Meanwhile, the winger on the ball side would take a step forward in hopes of closing down the full-backs if Villarreal passed the ball wide.

Therefore, Ramiro Funes Mori could not progress the ball and he moved it to his partner, Chakla. 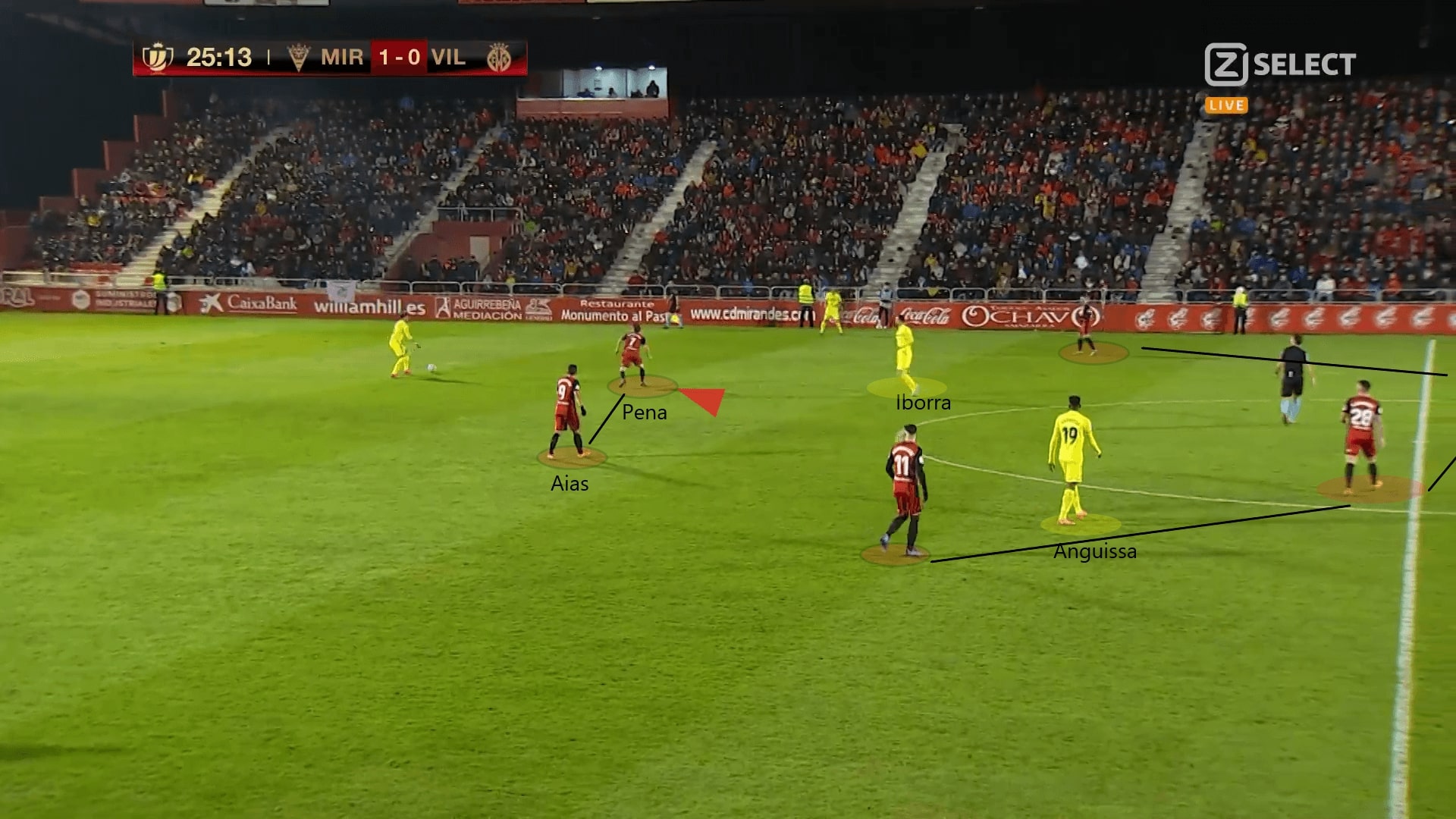 It seemed Iraola and his team noticed the weaknesses of Calleja’s system. Mirandés players were eager to attack the left flank, fully utilising the spaces behind the right-back of Villarreal.

Since Gaspar pushed too high when Villarreal were on the ball, Anguissa failed to cover those spaces behind him (he tended to cover the passing lanes and was unsuccessful), which made Calleja’s men vulnerable in the transitions.

In this match, Mirandés had nine counter-attacks, as we see in the graph below. Four of these transitions came from the left-side, with a total xG of 0.47.

Apart from the quick transitions, Mirandés also tried to attack the spaces behind Gaspar, even with their goal kicks. This resulted in the first goal.

The keeper and captain of Mirandés, Limones, played long in that direction from a goal kick. Their left-winger, Merquelanz, came inside to fight for the ball, initially taking Gaspar with him.

As a result, space was generated behind the right-back. Aias picked the lay off from his teammates, rounded Chakla and scored. Part of this goal could be attributed to the ability of Aias, but the tactics also helped. 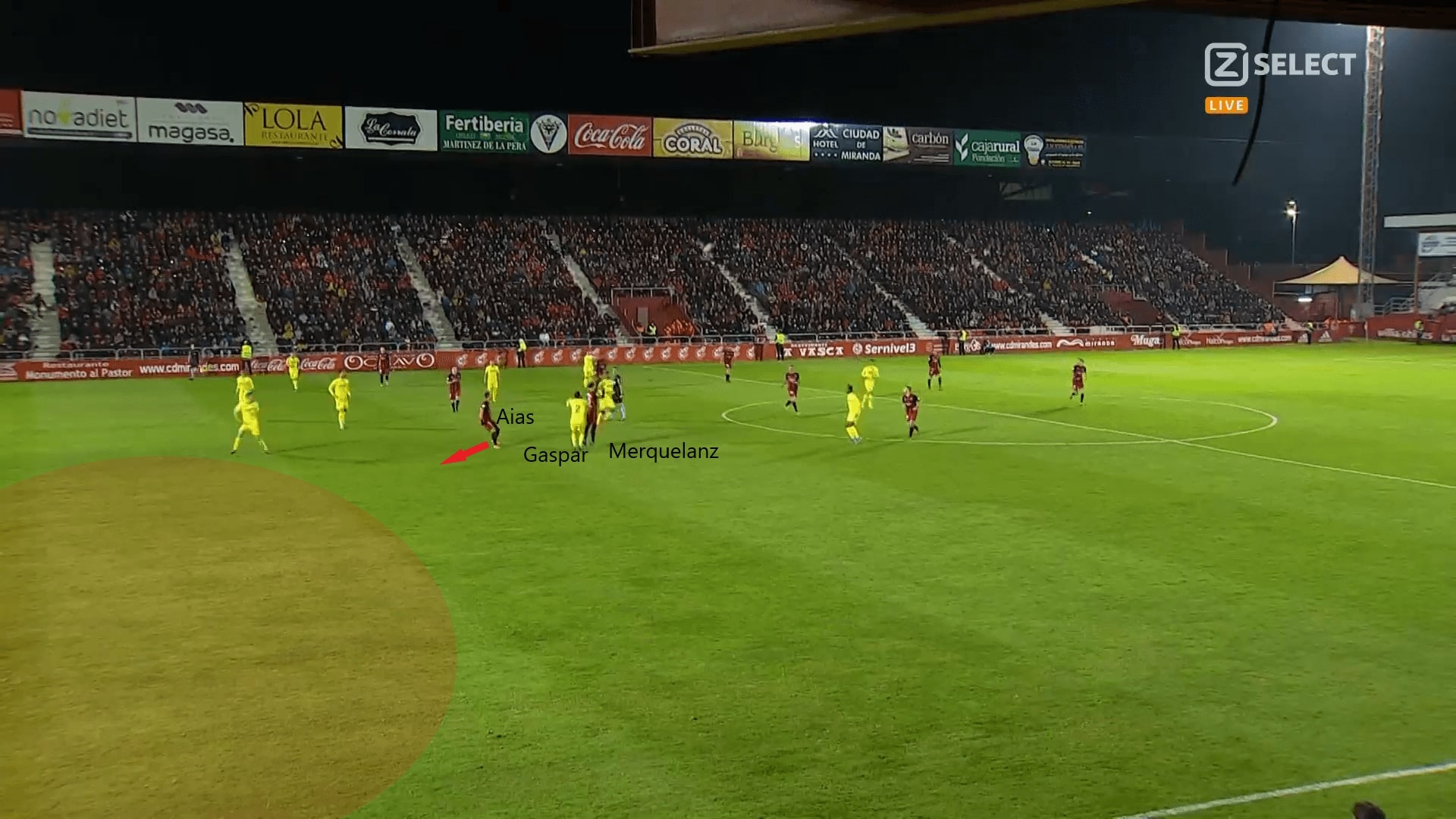 In the second half, Calleja and his men needed to come back from behind. It was not an easy task given the tactics of the opposition and the atmosphere in the stadium. They switched the attacking focus from the right to the left after the break.

Below we can see the top passing links with Cazorla. The playmaker of Villarreal exchanged 35 passes in total with the left-winger, Ontiveros. Another player who had a strong link with the former Arsenal man was Quintillà, the left-back.

With Cazorla releasing the players on the left, Villarreal could’ve tried something that seldom appeared in the first half.

On the left, the winger, Ontiveros, was a right-footed player, hence, he could cut inside to shoot or cross. Meanwhile, the left-back, Quintillà, could make overlapping runs on the left flank.

As shown in the next image, when the winger Ontiveros had the ball in the half-space, he had multiple options to choose from. This time, he released his left-back, Quintillà, who made a run behind him.

The two players on the left provided a total of eight crosses, six more than in the first half. However, the success rate was not high – only three of the 11 crosses hit their targets. 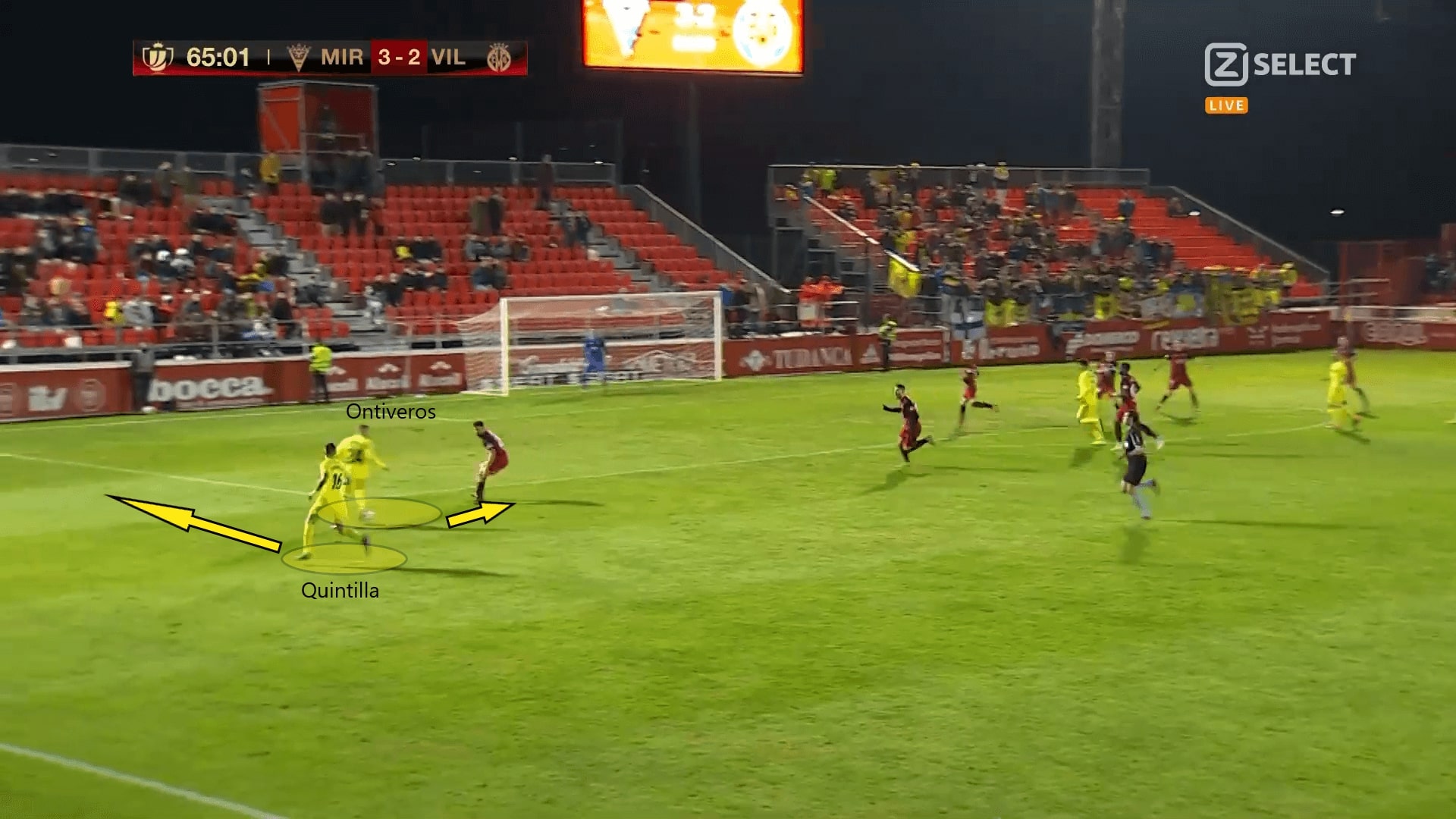 Villarreal were vulnerable in transitions

After Onaidia scored Mirandés’ third which made Calleja make his last substitution. Anguissa was replaced by Moi Gómez. And, after Alcácer came in, he released Moreno to a freer role. Iborra also pushed forward and joined the attack in the box.

Villarreal missed some chances in the box as Iborra, Moreno and Alcácer all had an attempt in this period. The downside of their tactical adjustments also led to the final goal of the game as Villarreal were even more vulnerable in the second half.

Despite defending deep, Mirandés’ attacking players were still willing to dash forward to join the counter-attacks. By contrast, Iborra was tired and he could not track those runs in the final stages of the game. Therefore, once Mirandés’ pass got behind the no.10 of Villarreal, their defensive line was exposed.

You can see Mirandés’ chance before the goal below as it shows the vulnerability of Villarreal’s defence without Iborra’s protection.

In this transition, Quintillà, the left-back of Villarreal, came inside to track Sánchez as the central players of Villarreal were not there. Rubén Peña and Funes Mori both moved to the right flank to put pressure on the ball.

As a result, Rey, the right-winger on the far side, was uncovered. It was fortunate that the 30-year-old could not receive the ball or else the game would have finished even earlier. 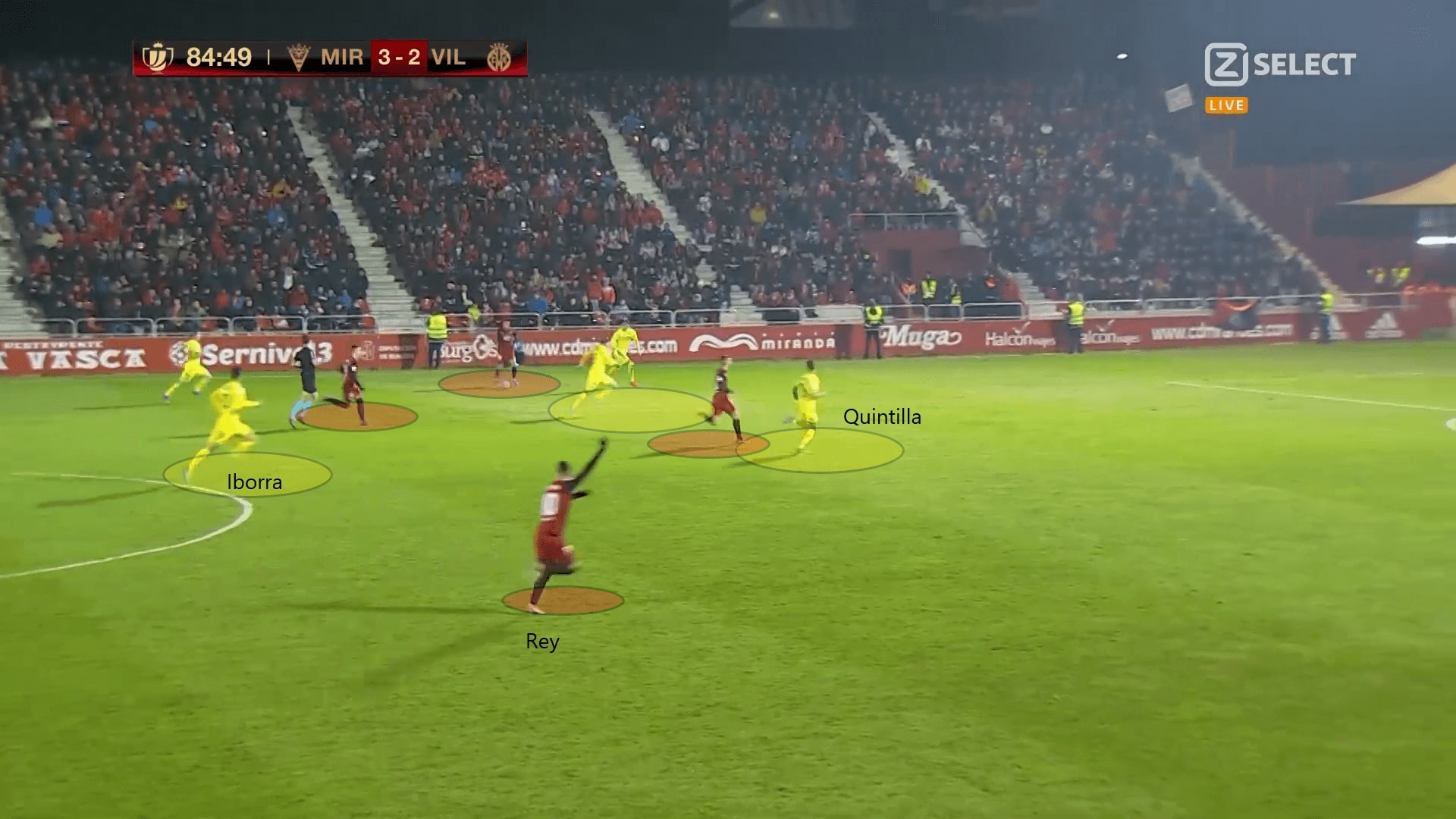 It was another great, memorable victory for Mirandés as they successfully beat three La Liga teams and reached the semi-finals of the Copa del Rey. Now, they will face Real Sociedad as their opponent. In this game, they showed passion and hard work to beat the team that sits in seventh in Spain’s top division and they really deserved to progress.

For Villarreal, it was definitely a disappointment that they lost to a team from the second tier while even playing with their key players. However, they have to recover from the loss quickly and prepare for the game against Valladolid as they are still fighting for a continental competition spot in the league.