Apart from the Barcelona game, there was also another clash between Mirandes and Sevilla in the Copa del Rey. Surprisingly, a La Liga team was defeated by a second division team, even though Julen Lopetegui started a strong team.

In this tactical analysis, we will show how Mirandes managed to beat Sevilla. It is an analysis that focuses on tactics.

For the home team, Andoni Iraola’s side played in a 4-4-1-1 formation. They benched their second top goalscorer, Marcos André; also, the former Bilbao man, Iñigo Vicente. Their left-winger, Martín Merquelanz was the top scorer of the team, with nine goals this season. The skipper, Gorka Kijera was on the bench,making the keeper Limones captain on the night.

Sevilla rotated their team a bit, playing in a 4-1-4-1 formation, but it was still an experienced squad. Their centre-backs were Jules Koundé and Diego Carlos. Nemanja Gudelj replaced Fernando Reges as the sole pivot. Lucas Ocampos was rested, Munir El Haddadi and Nolito started on both wings.

In the early stages of the game, Sevilla tended to spread the ball wide early, especially to the right side of the pitch. The home team pressed intensively and strategically, committing numbers forward at the right flank.

There were few points to note in their press. First, they aimed for numerical equality, in other words, a man-to-man approach. With the pressure of the centre-forward, it forced Koundé to move the ball wide. It was a signal for Mirandés to press.

Merquelanz closed down the right-back, and another key marking was the control of the supporting midfielder. They denied the free options of Sevilla at the centre by marking the dropping midfielder tightly. As we can see in the following image, Mickaël Malsa came forward to mark Óliver Torres.

The press heavily disrupted a comfortable build-up of Sevilla in the early stages of the game. 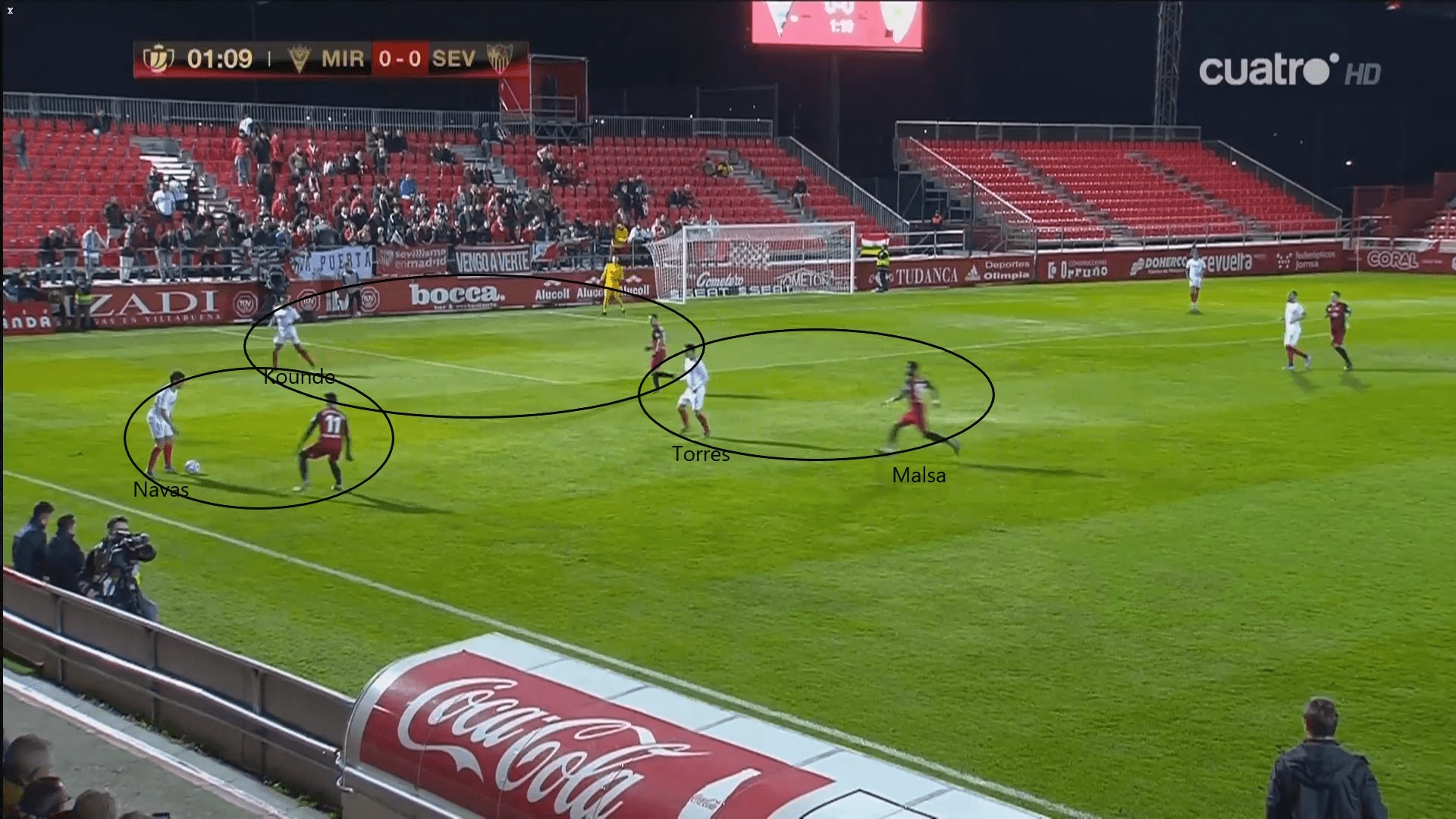 Mirandés resisted Sevilla in the second phase of the defence with a midblock in a 4-4-2 shape. They were energetic to press with an aim to prevent the central penetration of Sevilla, forcing the ball wide.

For Sevilla, Lopetegui’s team tried to play out from the back, with Gudelj dropping between the centre-backs, forming a back-three. It pushed both full-backs, usually, Jesús Navas into an advanced position. When the Serbian dropped to the defensive line, it left the central area open, which required the two No.10s, Éver Banega and Torres, to occupy those space.

The following scene illustrates the build-up of Sevilla and the midblock of Mirandés. Generally, the Matheus Aias and another player covered the midfielders, the, they could force the ball wide, as it was the usual habits of Sevilla’s attack.

On this occasion, when Banega and Torres were unavailable, Koundé passed the ball to Navas, which was an easily predicted pass that allowed Mirandés shift the midblock to close the ball side. 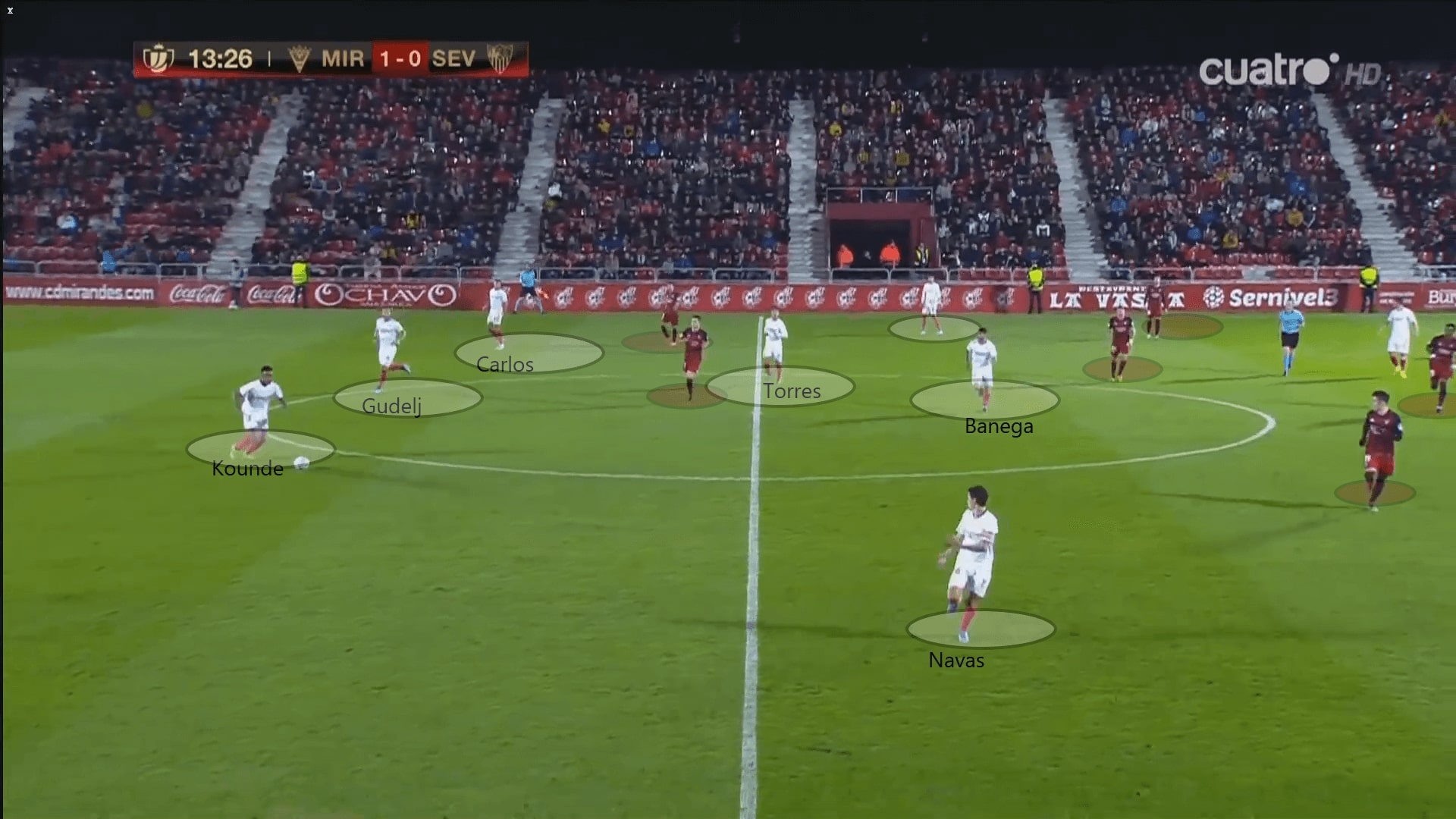 Furthermore, Mirandés players tracked the dropping players from the frontline tightly, hence, it was a pressing trap, which led to the second goal of the team. On this occasion, Banega dropped to receive the ball from Carlos, and Malsa was behind him, pressuring the Argentine. He forced Banega to quickly pass the ball away, or else he had to take Malsa on.

Banega passed early but seemed Iraola and his team did enough preparation work. They knew the Argentine’s habit was to move the ball to the wide player instead for an instant return pass. Banega was too casual, and his pass was intercepted by Aias, which was how Mirandés scored their second. 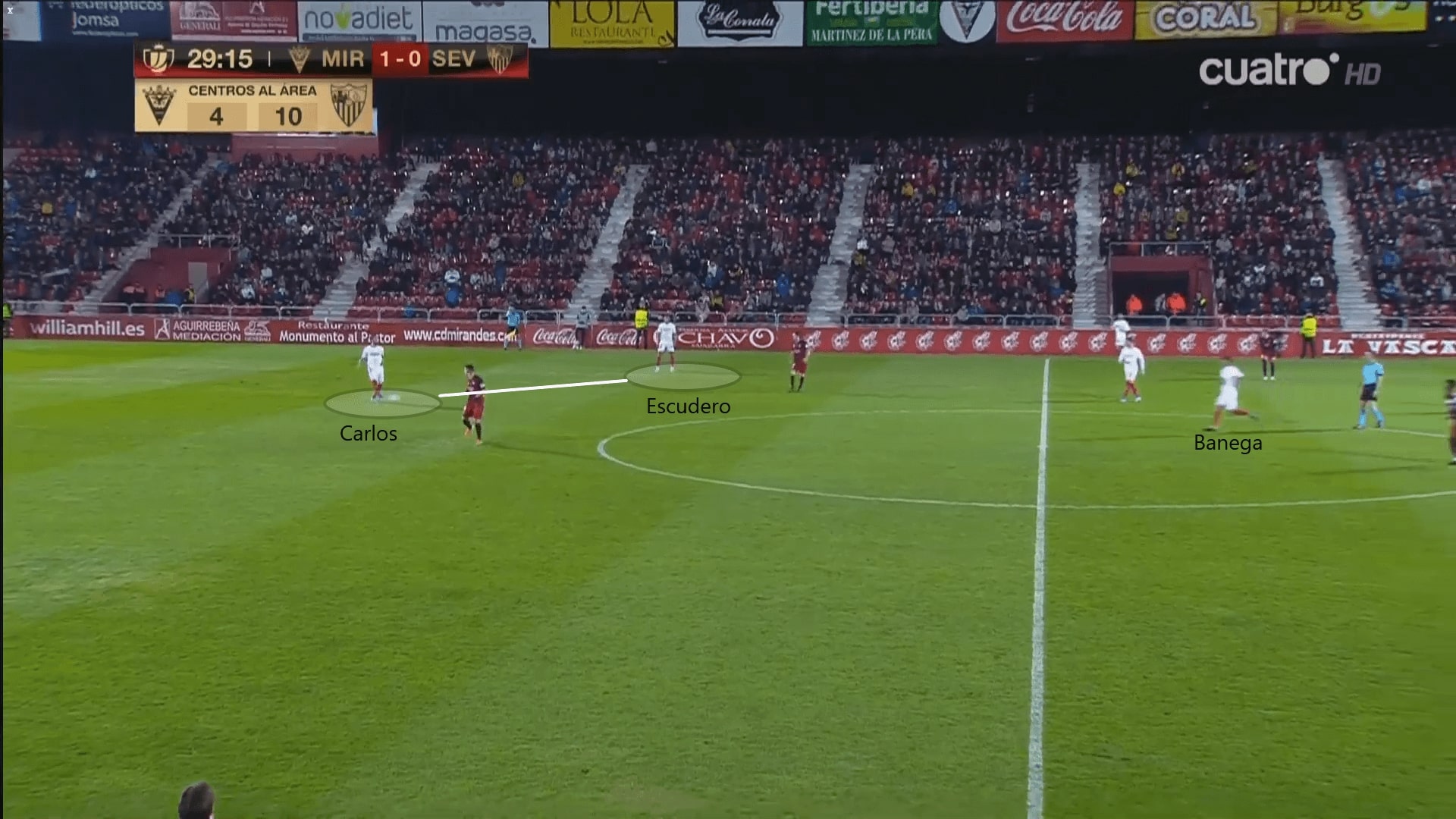 Sevilla attacked through the flanks

For Sevilla, they looked desperate to attack both flanks, instead of penetrating at the centre. In this phase, they utilised their full-backs to occupy the bylines, though they must have missed Sergio Reguilón and his progressive runs on the left.

On the right, Navas made a huge impact on the right flank, almost occupying the whole wide corridor. Defensively, the Spaniard handed seven recoveries, won three out of five aerial duels, and two out of four defensive duels. Offensively, as reflected in his heat map for the game, he always appeared in zone 18.

Given their reluctance to penetrate through the centre, Sevilla tried many crosses in this game. In this season, they crossed 23.48 times per game on average, in this game, they attempted 28 crosses, and 11 of them were from Navas. Their season average crossing accuracy was 35.2%, and in this game, 42.86% of the crosses met the targets. It reflected the crosses from Sevilla were not that bad, but they just could not convert their chances.

For another reference, there were some other statistics to support. Sevilla had 13 attempts in the game, 10 of them occurred inside the box. However, they only managed to score one. Nolito missed a huge chance just after the break, with an xG of 0.26, or else the story could be different.

This graph also reflected a tactical adjustment of Lopetegui. His team, especially Banega and Torres, tended to cross early in the first half but those crosses were denied by the defenders. In the second half, Sevilla were more patient to cross in zone 16 or 18.

However, with an experienced squad in this match, Sevilla should not struggle that much. The problem was a bit complex, which the attacking issues turned out to become defensive issues.

First, when we looked at the below passing map of the team, we can observe some features. Sevilla tried to open the shape, make the pitch as big as possible as it was normal for a team which hoped to play out from the back. However, Carlos and Koundé were too far away from each other, of course, they split since they allowed Gudelj to drop between them. However, this made Sevilla vulnerable when defending transitions, as they could not protect the central area in a short instant.

Also, linkages between midfield players and front players were weak. The top three passing links occurred between the defenders and Gudelj, and, for the front players, they did not connect.

There were some game examples with regards to the use of half-spaces. In the first half, Sevilla did not exploit the half-spaces much. On this occasion, Torres received the ball wide, when El Haddadi got a chance to make a forward run to the half-spaces, but he gave it up, changed his direction and ran to the centre. As a result, Torres could only pass the ball to the inside of the pitch and his cross to Luuk de Jong was too predictable. 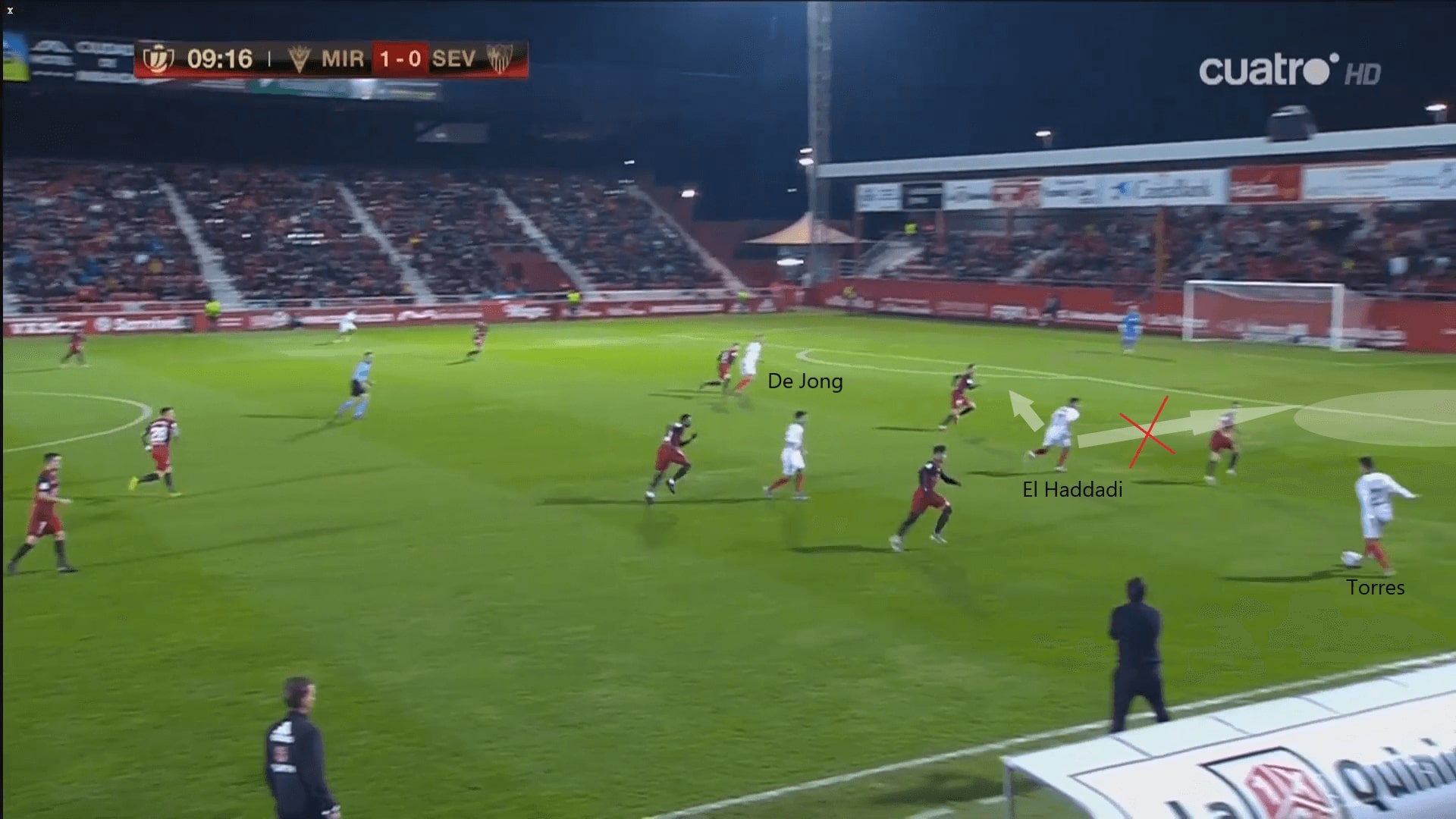 In the second-half, Lopetegui quickly introduced fresh legs, Ocampos, Joan Jordán and the new signing, Youssef En-Nesyri onto the pitch. They attacked the half-spaces more by running and exploiting those areas.

The defensive midfielders of Mirandés were protecting the half-spaces. In the second half, their concentration levels dropped a bit, allowing the free player to run behind them more often. In this example, Nolito pretended he was going to cross, instead, he passed to Torres, who was running towards the half-spaces. Malsa was caught as he was unaware of the 25-year-old Spaniard’s movement. Torres created a chance for Ocampos but the Argentine wasted it. 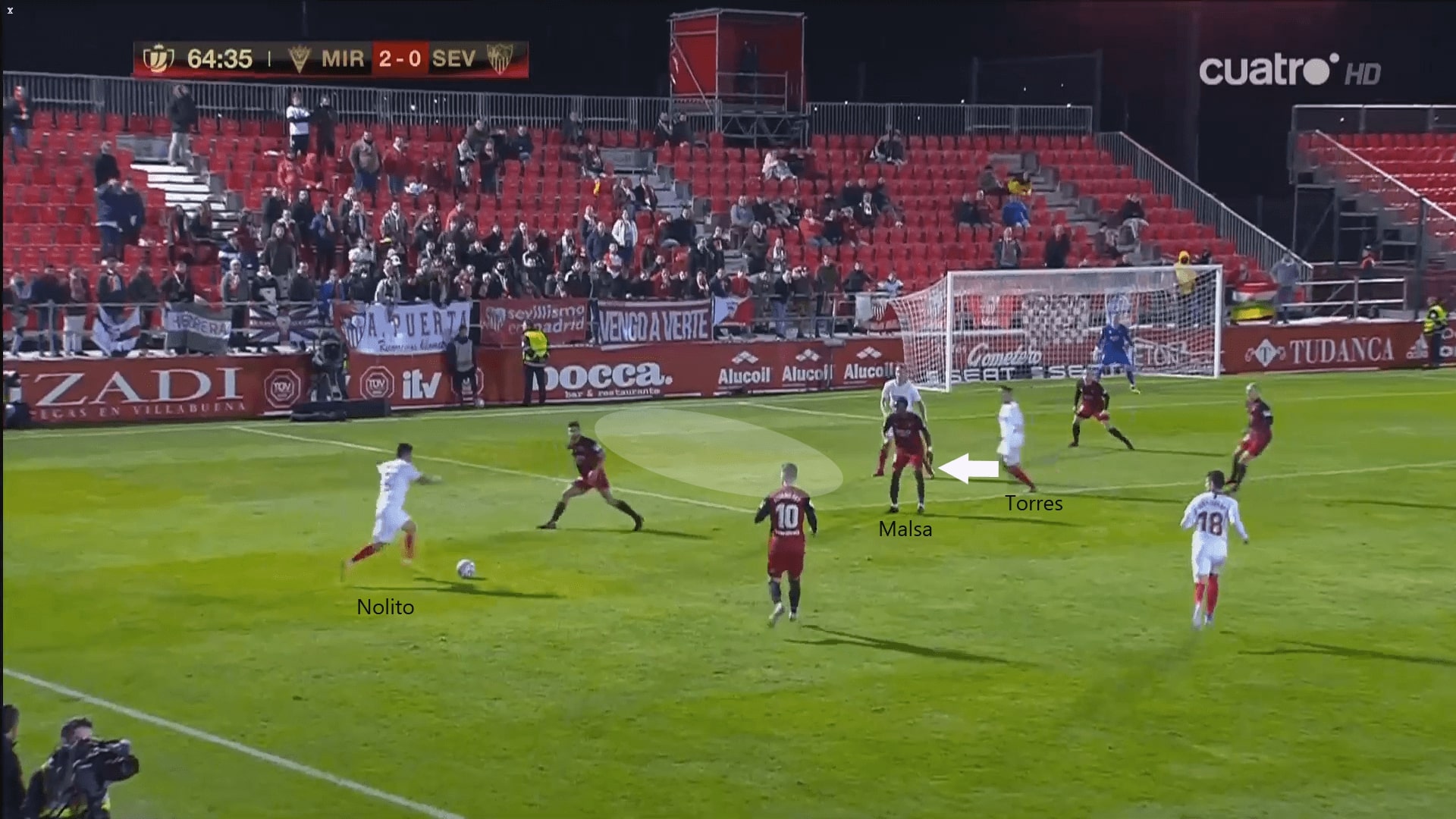 The performance of individuals was not impressive at all. Nolito, who started on the left-wing, did not take on the opponents, with zero dribbles in this game. Also, he only provided one progressive run. Although he scored one, the performance was still far from satisfaction.

It could be a surprise that Sevilla were knocked out by Mirandés, a Segunda Divisón team. However, given the sloppy performance of the players on the pitch, the home team deserved to progress to the next stage. Despite creating several chances in the game, Sevilla could not convert them, while their opponents were more clinical to score two goals in half an hour. It was a great disappointment at the Anduva but Sevilla have to carry on in La Liga, they still sit third in the table.