Just three days after meeting in the FA Cup final, where Leicester City defeated Chelsea to win their first-ever FA Cup, these two teams faced each other in a pivotal clash in the Premier League. Both these teams are striving to reach the top four and thereby attain a place in next season’s Champions League, with Liverpool waiting to pounce on any lapses and sneak into the top four themselves. Thomas Tuchel’s side may have considered themselves unlucky to have lost the FA Cup final, given the two big saves made by Kasper Schmeichel towards the end of that match, as well as their disallowed equalizer, and that defeat would have acted as motivation for this rematch to ensure that the Blues did not lose out to the Foxes again. Our tactical analysis of this match will look at both sides’ tactics and approach to this crucial encounter. 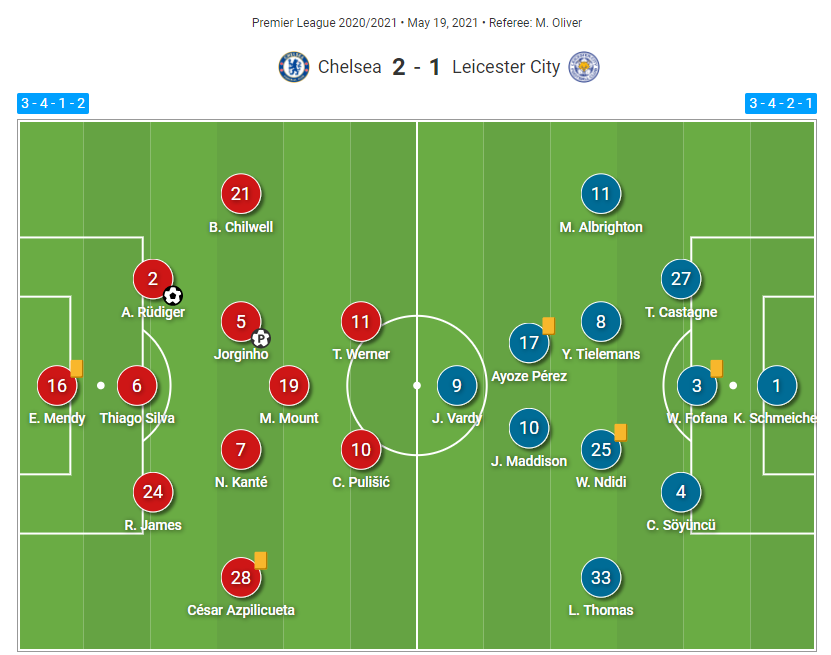 Tuchel made a couple of changes to the side that took to Wembley three days ago – Edouard Mendy returned in goal, with Ben Chilwell replacing Marcos Alonso at left-back, and Christian Pulisic coming in for Hakim Ziyech.

Brendan Rodgers was forced to make one alteration, as Marc Albrighton replaced the injured Jonny Evans, with Timothy Castagne moving into the back three. Kelechi Iheanacho was also on the bench despite his stellar goalscoring form, as James Maddison started with Ayoze Perez behind Jamie Vardy instead.

Mount and Kante drag Leicester all over the pitch

While it may have seemed as though Chelsea’s setup was the same as it was for the FA Cup final, and indeed for the majority of Tuchel’s time in charge, there was a subtle variation that made all the difference. This was with regard to Mason Mount’s positioning – rather than playing as a number 10, he was part of a midfield three with Jorginho and N’Golo Kante, with Pulisic and Timo Werner as the two strikers. This change in Mount’s role and position, along with Kante’s movement, caused Leicester a lot of problems up until the Frenchman was substituted in the first half as a precaution. 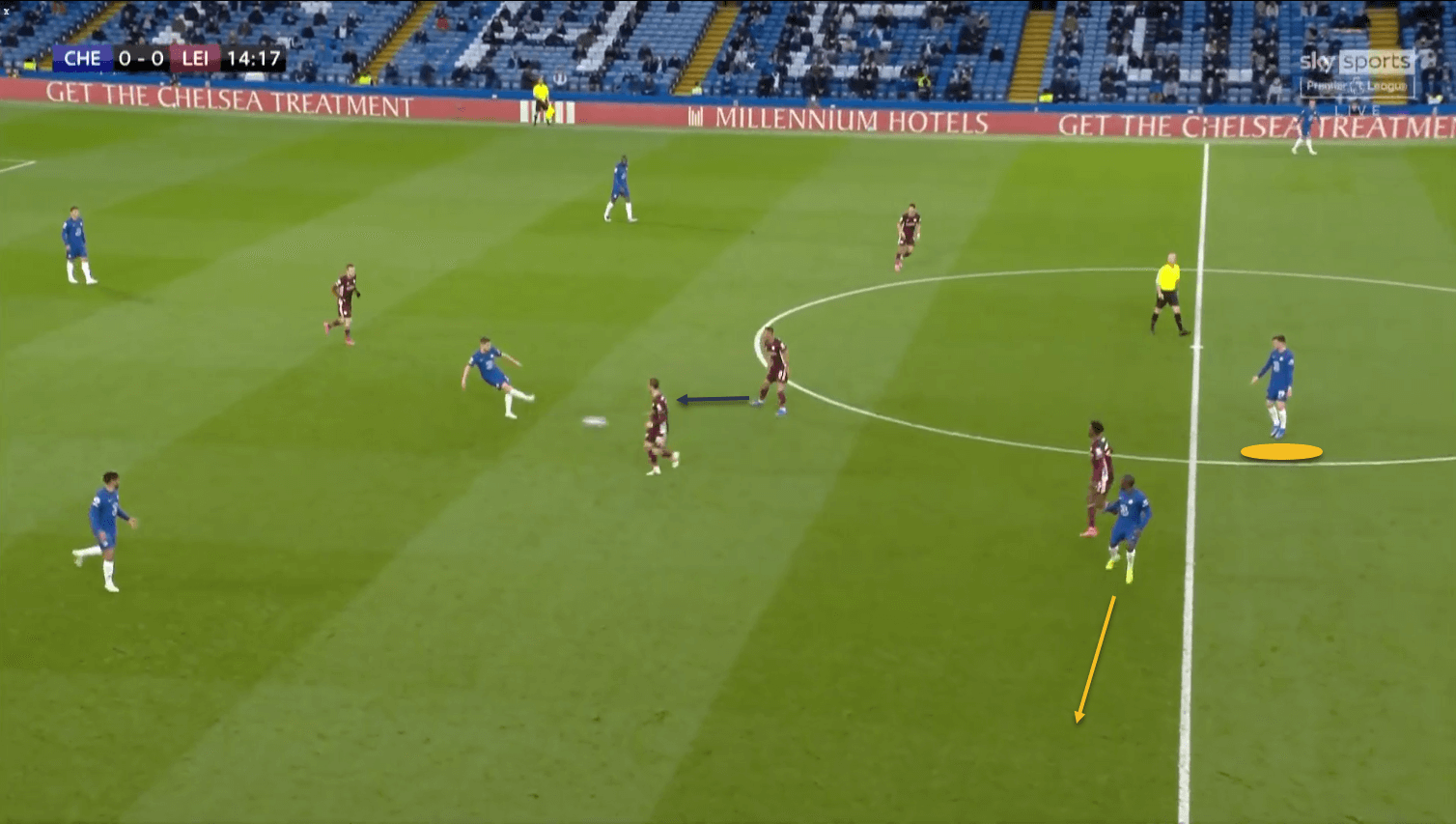 This is the sort of situation that occurred multiple times in the first half – Kante’s movement dragging one of the Leicester pivots towards him, which opened up space for Mount to receive possession in space and between the lines. The reason behind this was the way in which Leicester pressed Chelsea, with Vardy and the two playmakers pressing the three Chelsea centre-backs, while Youri Tielemans and Wilfred Ndidi would mark Jorginho and Kante, which meant that Mount was then left free. 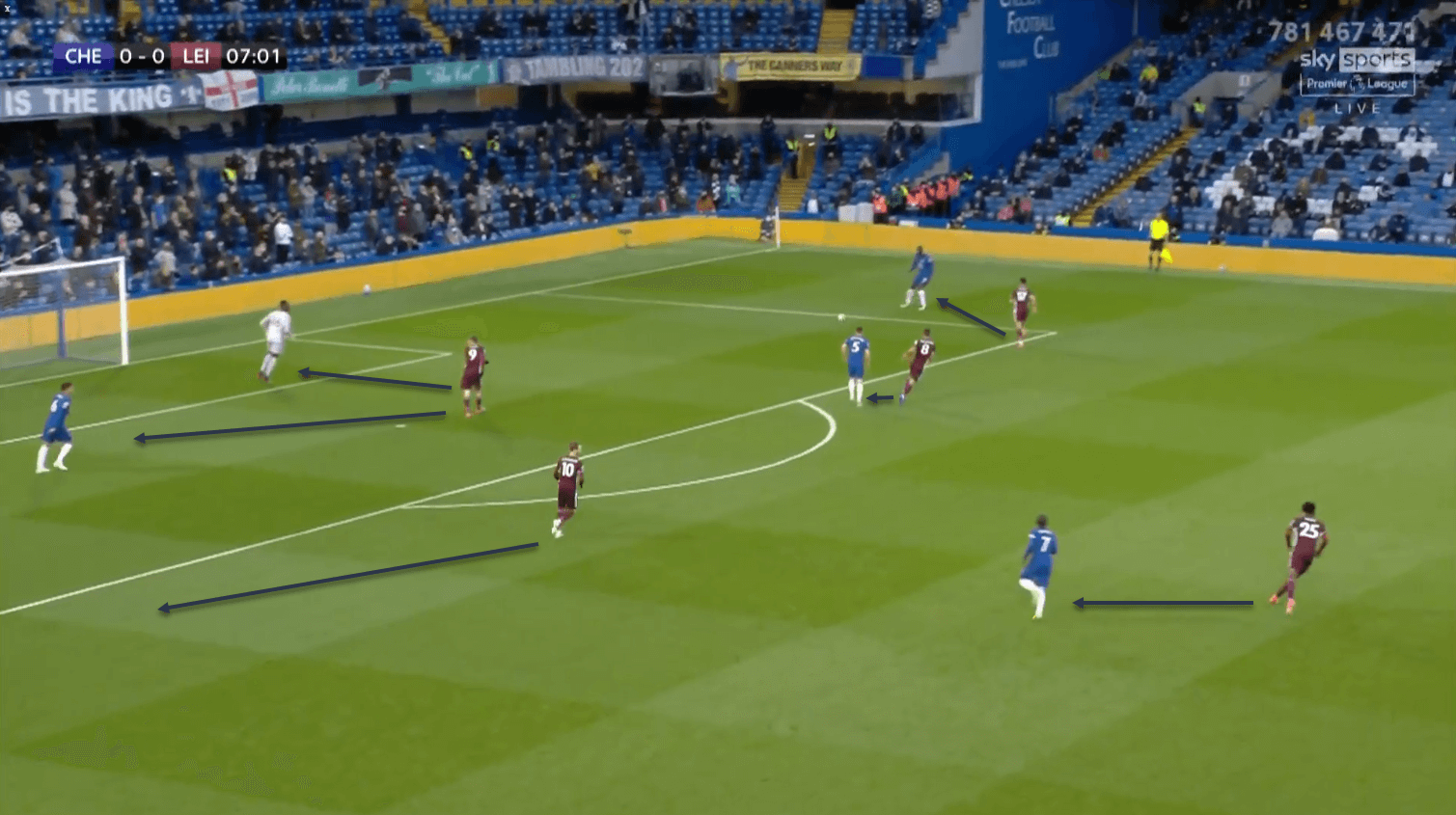 This is an example of the aforementioned pressing strategy – Perez is pushing onto Antonio Rudiger as he receives possession, with Tielemans sticking tight to Jorginho, Ndidi shadowing Kante, Vardy watching Thiago Silva and Edouard Mendy, and Maddison ready to move onto Reece James if the ball is switched. 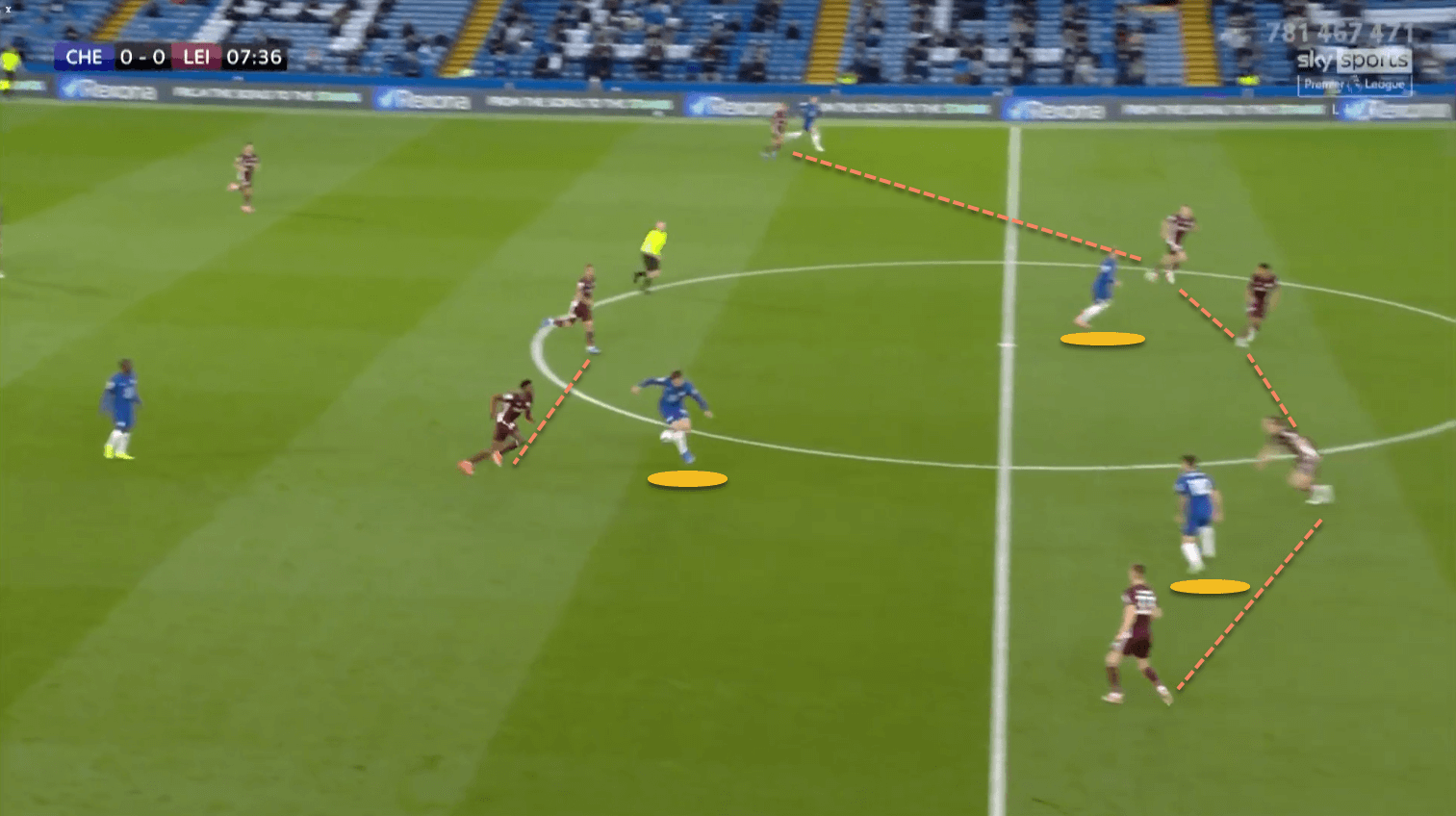 As the move developed, the ball was then played to Mount who had found space between the Leicester defence and midfield. Another contributing factor here is Werner and Pulisic’s positioning, as they pin the Leicester centre-backs to help create that space for Mount to receive – both of the Chelsea forwards are extremely quick, so the Foxes’ centre-backs tried to stay deep and goalside of them whenever possible.

Kante, in particular, was in fine form, as he has been for the last few weeks, and he played a big role in Chelsea’s attacking strategy until his substitution. 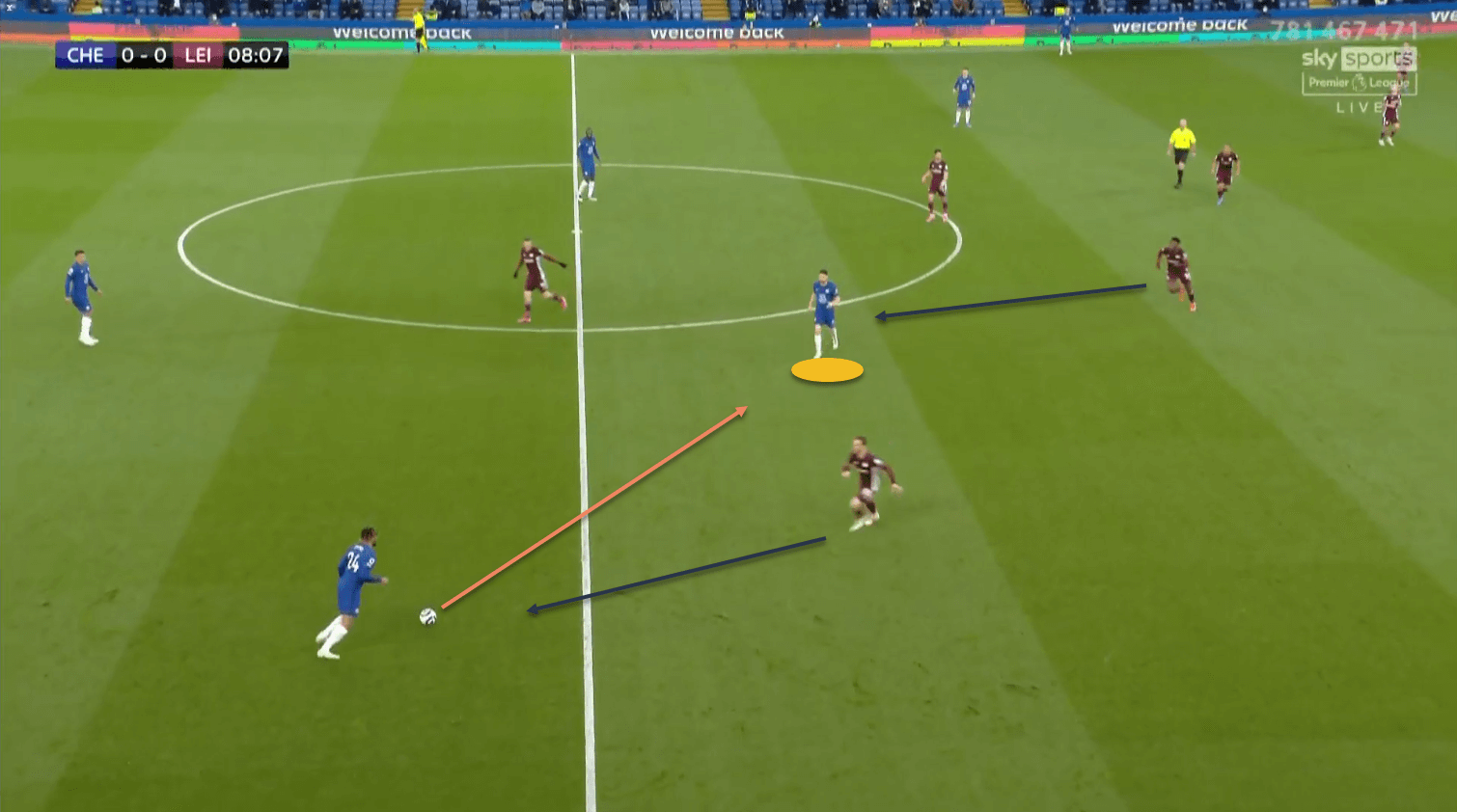 Here, as Maddison pushes onto James to close him down, Jorginho is left in a lot of space and the Englishman can play a simple pass to him, with Ndidi scrambling to cover. 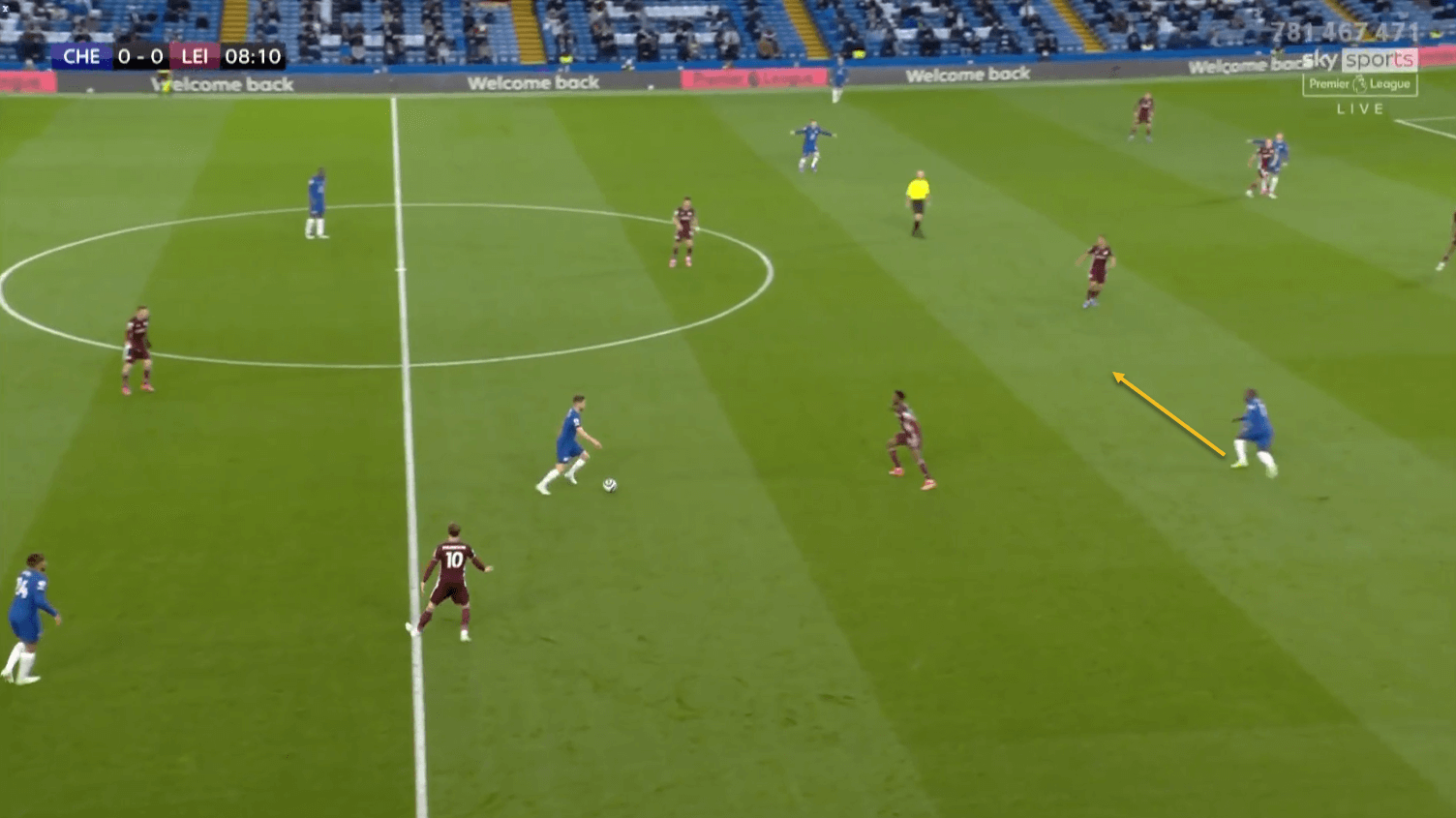 With Ndidi now screening a pass into Kante, the Frenchman darts infield into the space just vacated by the Nigerian… 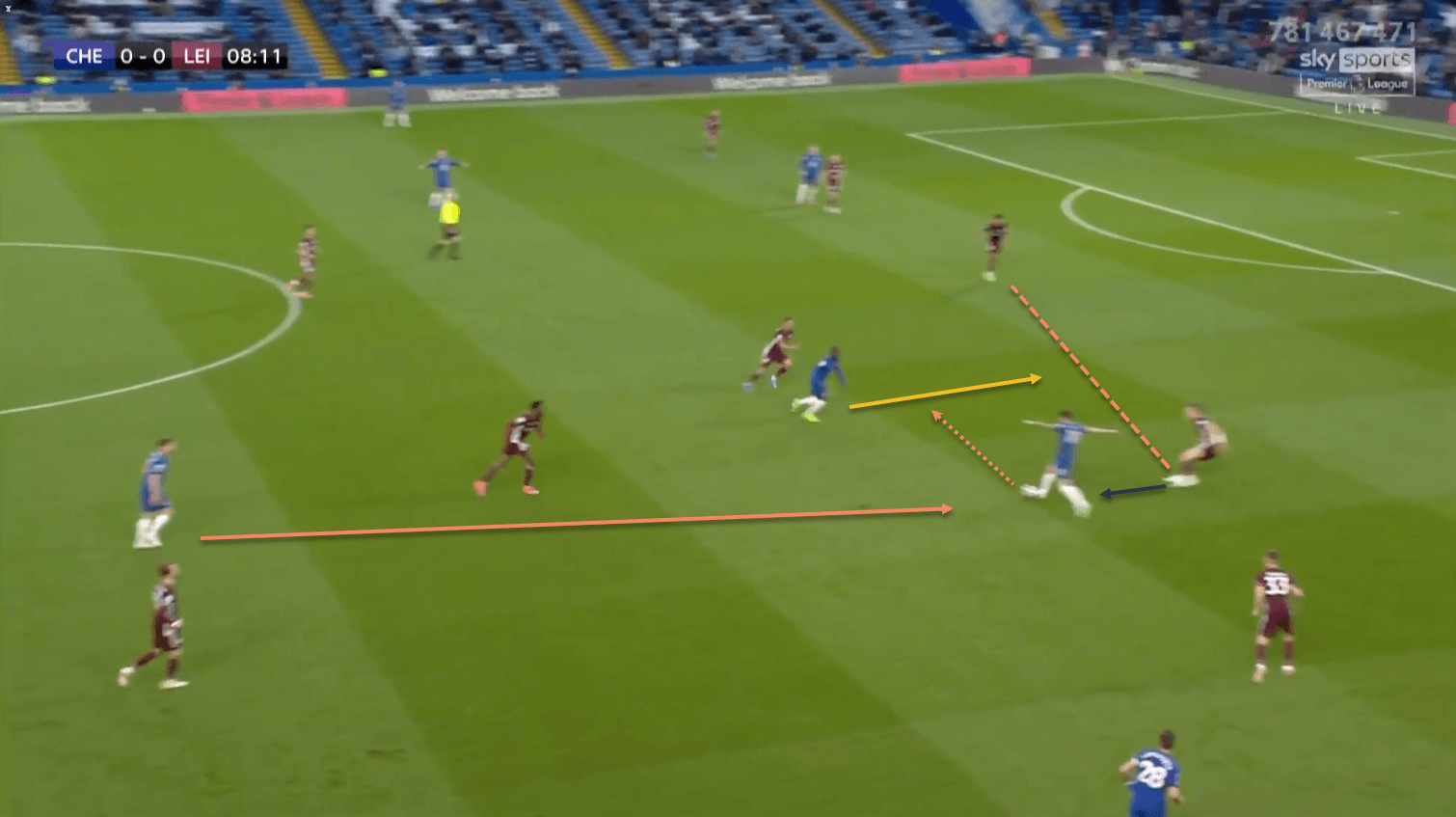 …which opens up the pass to Pulisic, who has dropped off from the backline. The American plays a first-touch pass to Kante, now storming forward, and he is able to burst through the gap in Leicester’s defensive line and force a good save from Kasper Schmeichel.

Both of these players – Kante and Mount – combined to good effect for Timo Werner’s disallowed goal in the first half, which was the perfect encapsulation of the threat they posed on the night. 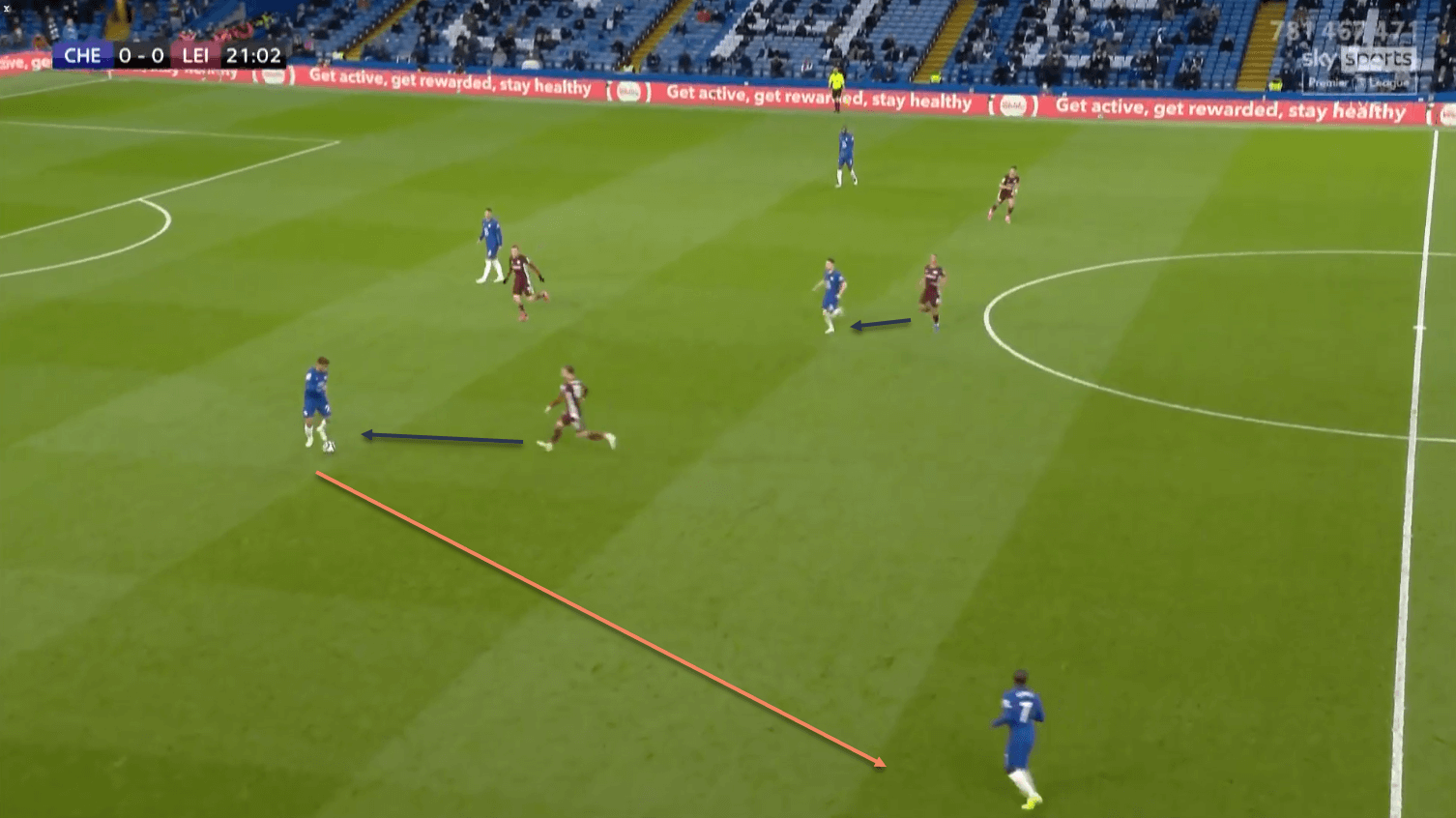 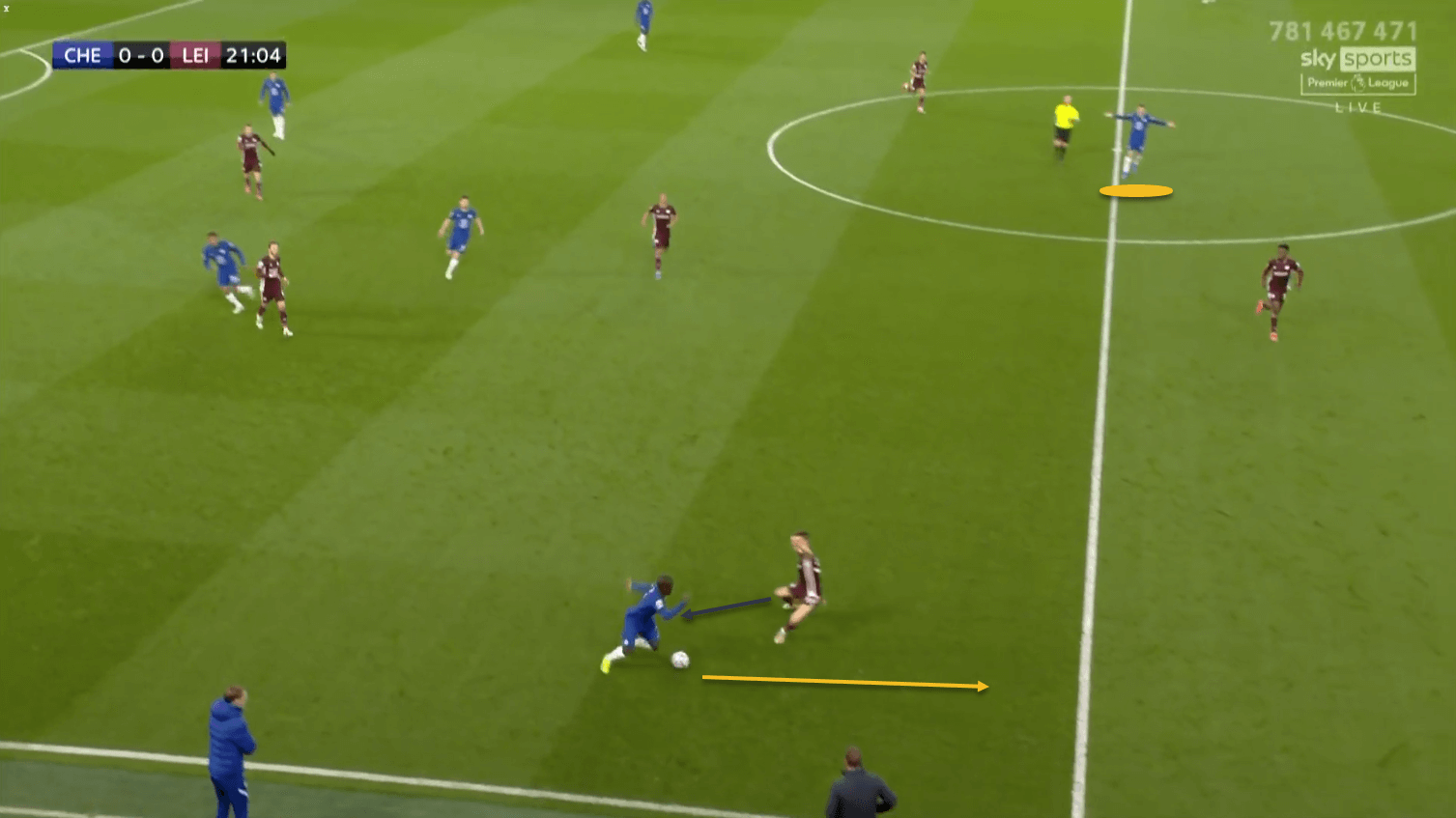 Luke Thomas has to come out to engage Kante, who is able to push the ball past him and run. Note how Mount is once again in acres of space in midfield and is gesturing for the ball to be played to him. 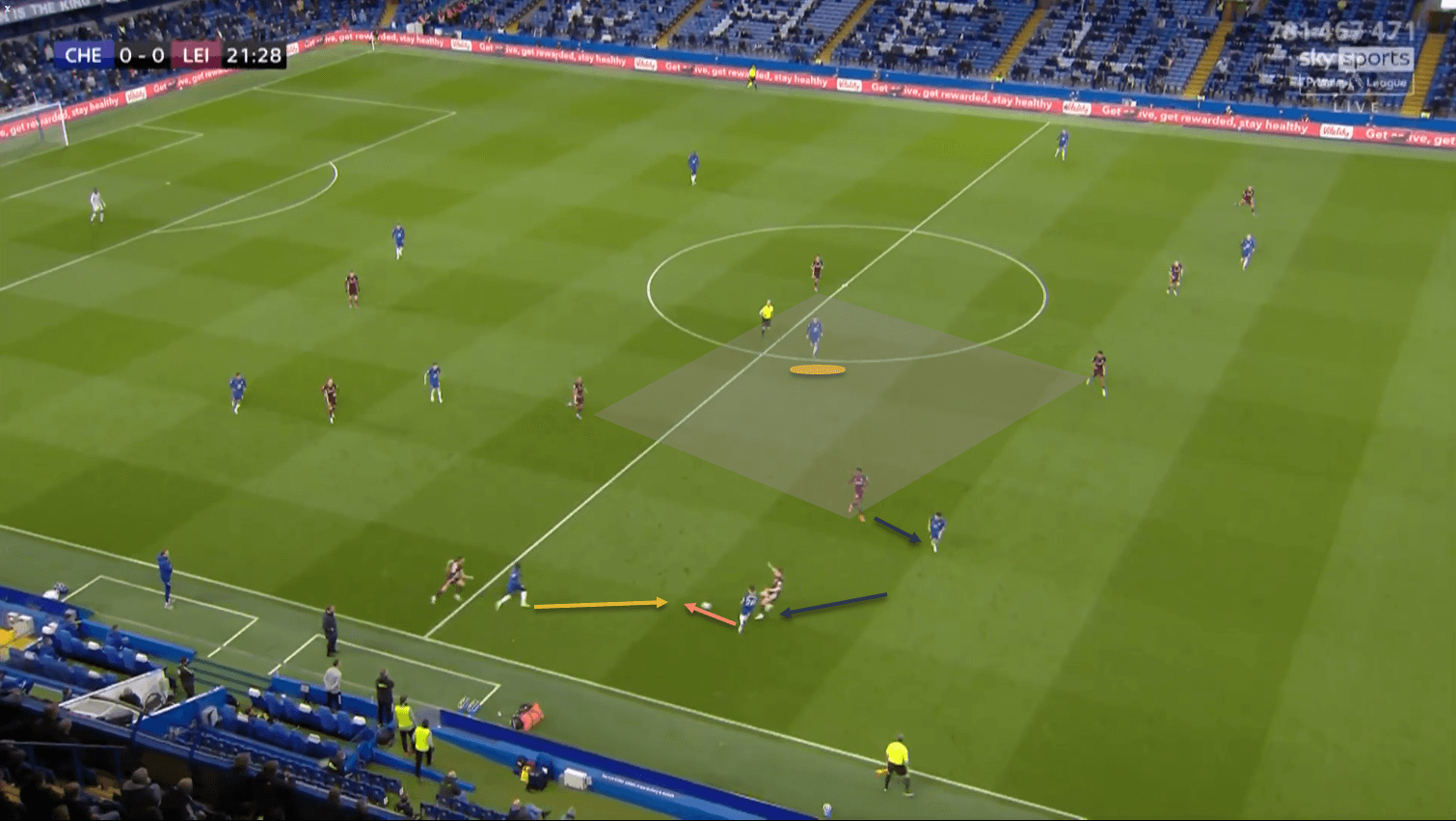 Kante plays a one-two with Cesar Azpilicueta, who has drawn Çağlar Söyüncü out towards him, which, in turn, forces Ndidi to drop into the backline, creating even more space for Mount, as we can see. 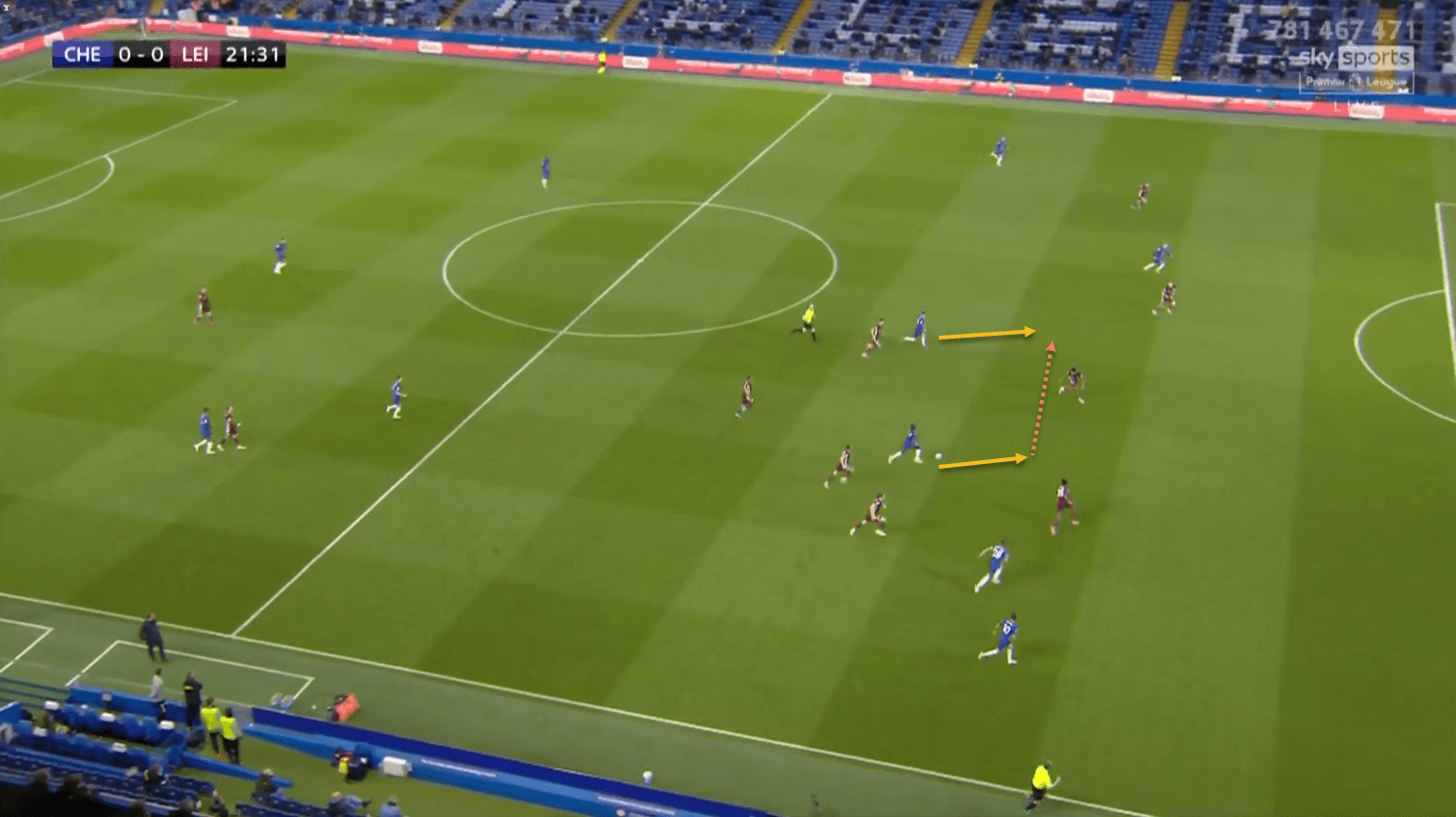 The Frenchman drives into space, and is able to lay the ball off to Mount, who passes to a fractionally offside Werner to finish past Schmeichel.

These two players have been perhaps the most impressive of the Chelsea squad this season – Mount even received the club’s player of the year award as voted for by the fans before kickoff, and the first half was a brilliant example of their influence on Chelsea’s attacking play.

However, Chelsea’s dominance of the midfield zone continued even after Kante had been replaced by Mateo Kovačić.

Maddison and Perez continued to press the Chelsea centre-backs, which was creating a lot of space behind them for Jorginho and Kovačić to receive possession, as the Leicester pivot had to keep Mount in mind as well. 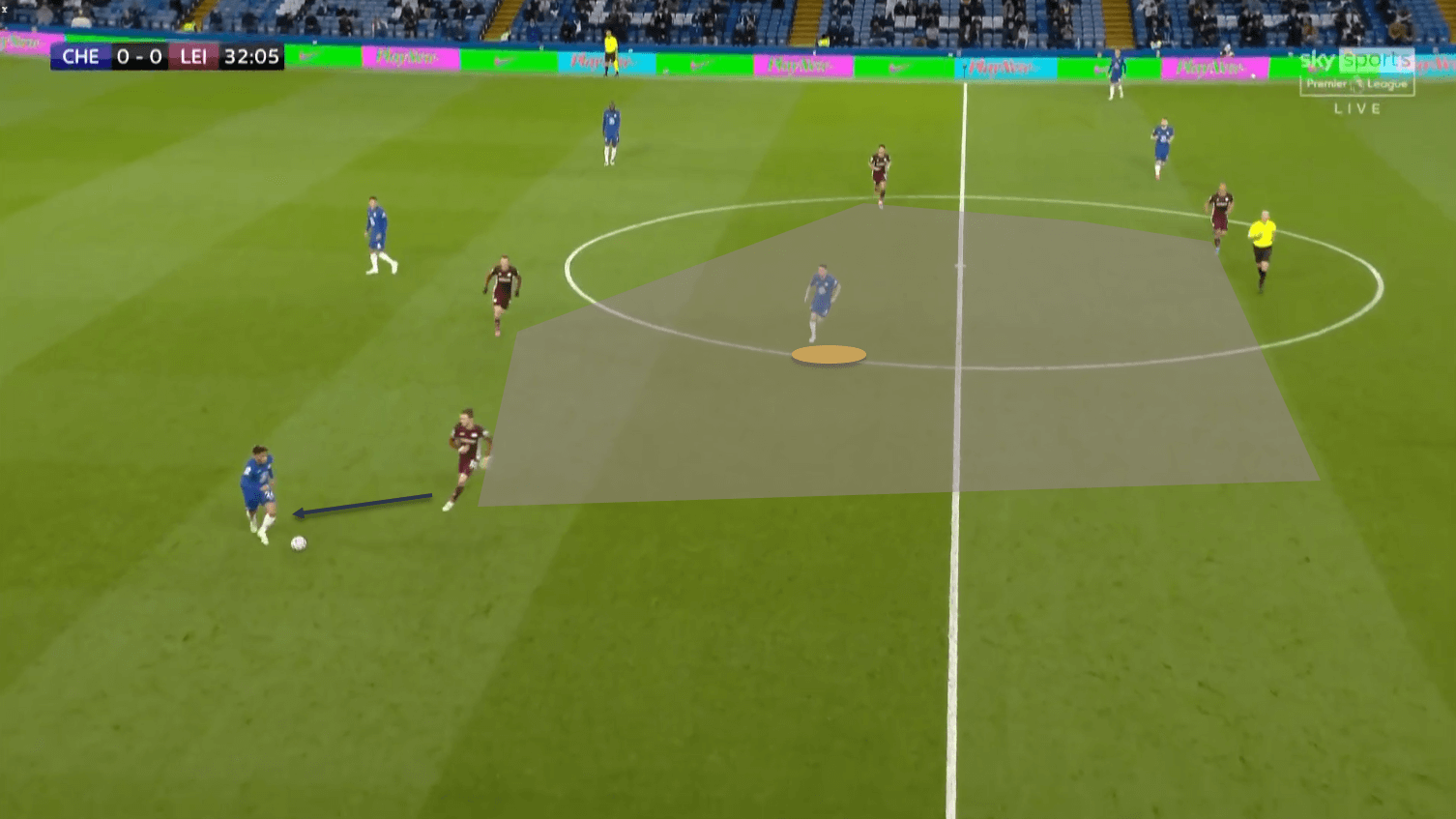 As Maddison presses James yet again, Tielemans is slightly deeper to account for Kovačić, while Ndidi is not even in the frame – we can already see the space this has afforded Jorginho. 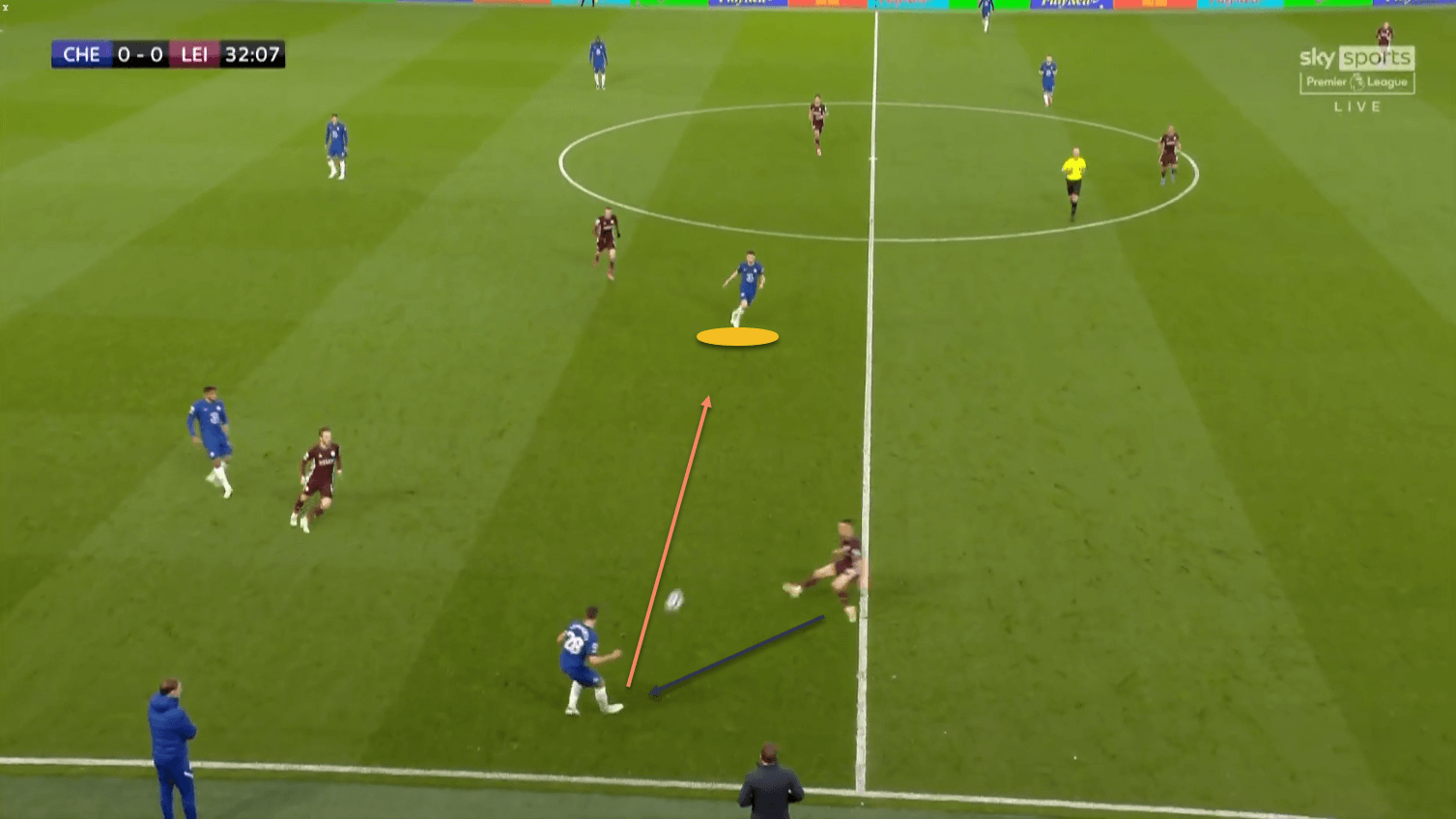 Once again, Thomas has to push out to cover Azpilicueta, who has a simple pass to make infield to find Jorginho. 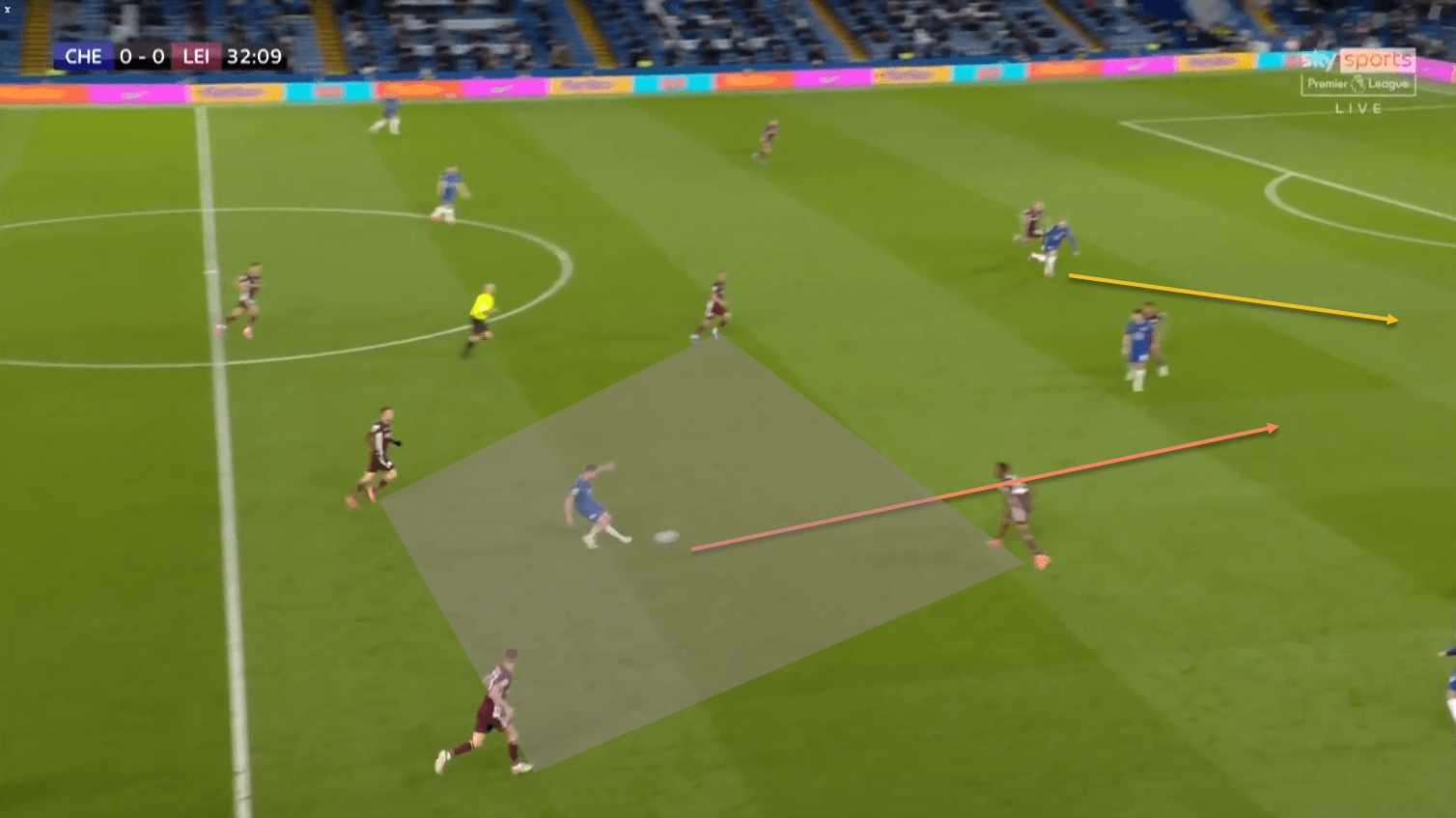 The Italian is then able to play a pass in behind the Leicester defence for Werner to run onto – the German is only denied by a superb block from the covering Timothy Castagne. Note how Ndidi is only just managing to recover into a central position due to Mount’s wide positioning (just out of the frame on the bottom right of the image), while Pulisic has once again come short to create the space for Werner to run into.

Chelsea’s attacking patterns and movements were slick and dangerous, causing the Foxes problems throughout the match, with their manipulation of the space in midfield playing a big role in their dominance of this match.

As at Wembley, Leicester were a diminished force in this match, not creating too many opportunities and ceding possession to Chelsea. While they managed to win the FA Cup final through a wonderful Tielemans strike, Chelsea did manage to turn their dominance into a win in this match. The limited chances that the away side did create came from the wide areas, with Chelsea concentrating on denying the Foxes progression through the central areas. 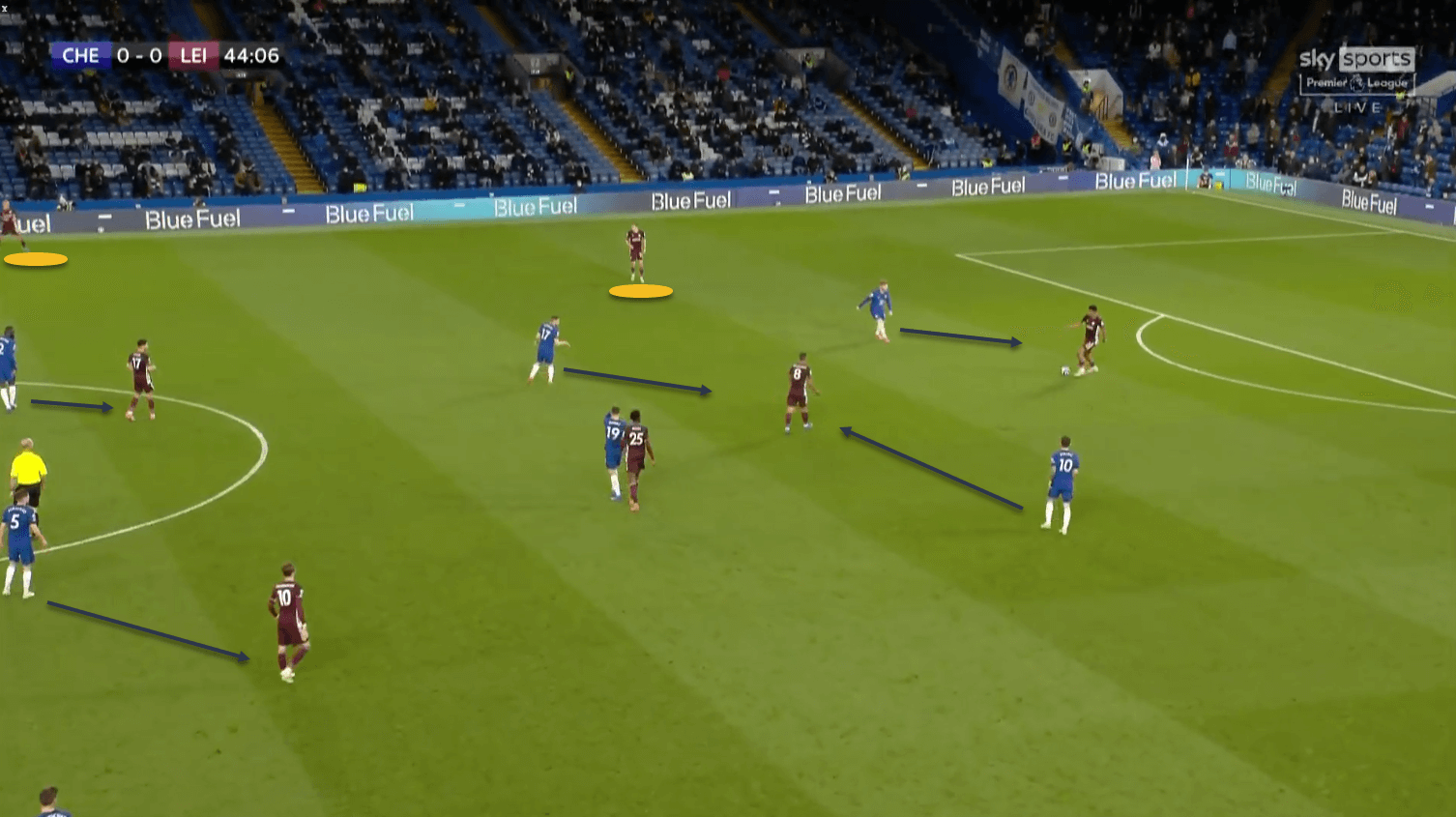 We can see this in the way Chelsea pressed – Werner would press centrally, with Pulisic dropping into the second line of Chelsea’s press. Kovačić, Mount and Pulisic would pick up the Leicester midfielders, while Jorginho marked one of the two playmakers, and Rudiger stepped up from the defensive line to pick up Perez. This meant that the outside centre-backs would have space, as we can see with Castagne here, and Wesley Fofana is able to play a simple pass out to the Belgian to get Leicester up the field. 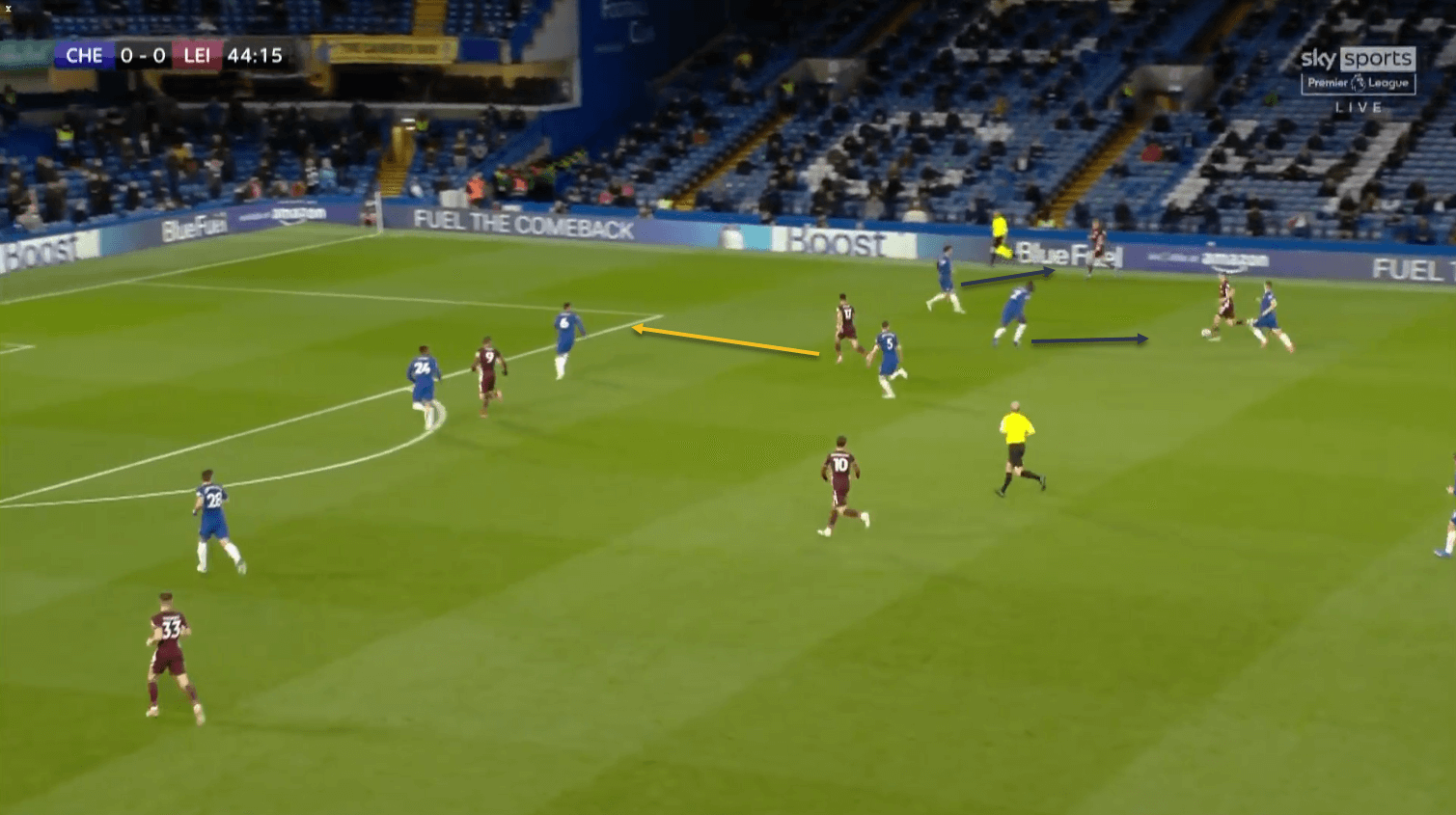 Castagne’s advance on the ball pulls Rudiger out towards him, and with Chilwell responsible for Albrighton, this opens up the space for Perez to make a run into the box, from where he sends a dangerous cross flashing across the six-yard area.

Leicester’s attacking opportunities were few and far between – their goal came late in the second half after Chelsea had already scored twice, and was borne out of a successful press rather than a successful passing or build-up move.

This was a huge win for Chelsea, as it moved them one point ahead of their opponents, and put their fate in terms of the top-four race firmly in their own hands. Consecutive losses to Arsenal in the league, and then Leicester in the FA Cup final, threatened to derail what had been an excellent season for the Blues so far, but this win would have given Tuchel’s men a lot of confidence, especially as they were able to welcome fans back to Stamford Bridge after more than a year. The presence of around 10,000 fans certainly made a huge difference, as Chelsea played with a lot more energy and confidence, and they will hope to feed off that energy in the same manner in the Champions League final against Manchester City at the end of the month.

Winning the FA Cup was a huge achievement for Leicester City, but all of that goodwill is in risk of being overshadowed if they fall out of the top four right at the end of the season. It would spell a great sense of deja vu for the club and its fans, as they missed out on Champions League qualification in a similar manner on the final day last season, having been in the top four for the majority of the campaign, and the same situation seems to be repeating itself. Rodgers’ side host Tottenham Hotspur on the final day, but as the table stands at the moment, their fate is not in their own hands, with Liverpool also having sneaked ahead of them, and another failure to make the top four would certainly be a blot on what has been a largely impressive season for the Foxes.