The 2021 FA Cup final clash featured two potential top-4 candidates of the 2020-21 Premier League season, Chelsea and Leicester City. While Leicester City beat Southampton to clinch their ticket to Wembley, Chelsea overcame Manchester City last month for the first time to make it into the finals.

Both the teams, would like to end their season with a top-4 finish and take home the FA Cup with Chelsea additionally having the Champions League left to play for. This article features the tactical analysis of the match and how Brendon Rodgers’ side overcame Tuchel’s men to win their first FA Cup. Let’s begin the analysis.

Chelsea made 5 changes to the lineup that was defeated by Arsenal in their recent London derby. The likes of Rudiger, Marcos Alonso, N’Golo Kante, Hakim Ziyech and Timo Werner were drafted into the lineup as Tuchel went with his strongest team available. 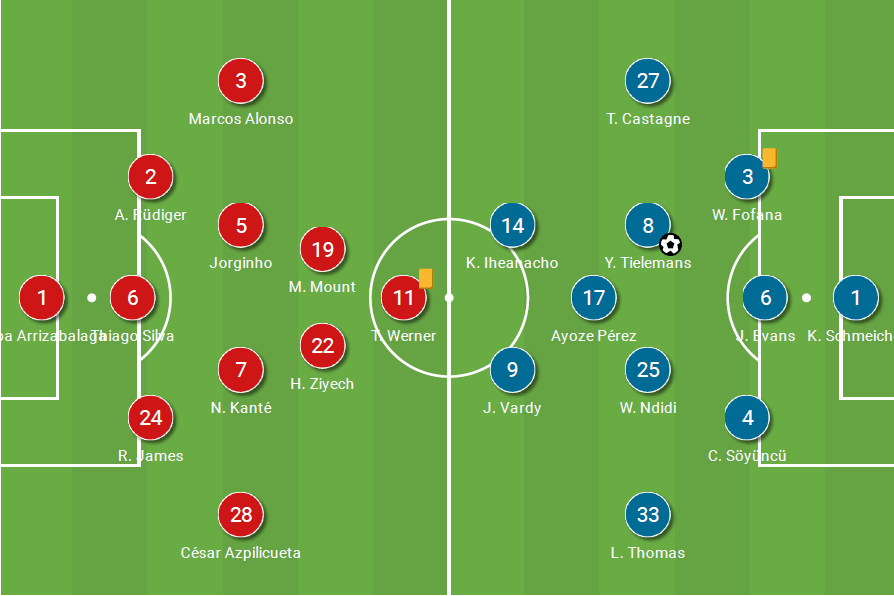 On the other hand, Leicester retained the same team that beat Manchester United few days back at Old Trafford as Rodgers’ men kept an eye on securing a top-4 spot for the next season while also prioritizing the FA Cup.

Chelsea in their game against Arsenal struggled to progress the ball efficiently against their rivals’ intense man-oriented press at the attacking third. Their press eventually forced a mistake from Jorginho that led to a goal. Leicester decided to use the same tactics against Chelsea in finals with a similar approach albeit with some minor changes. 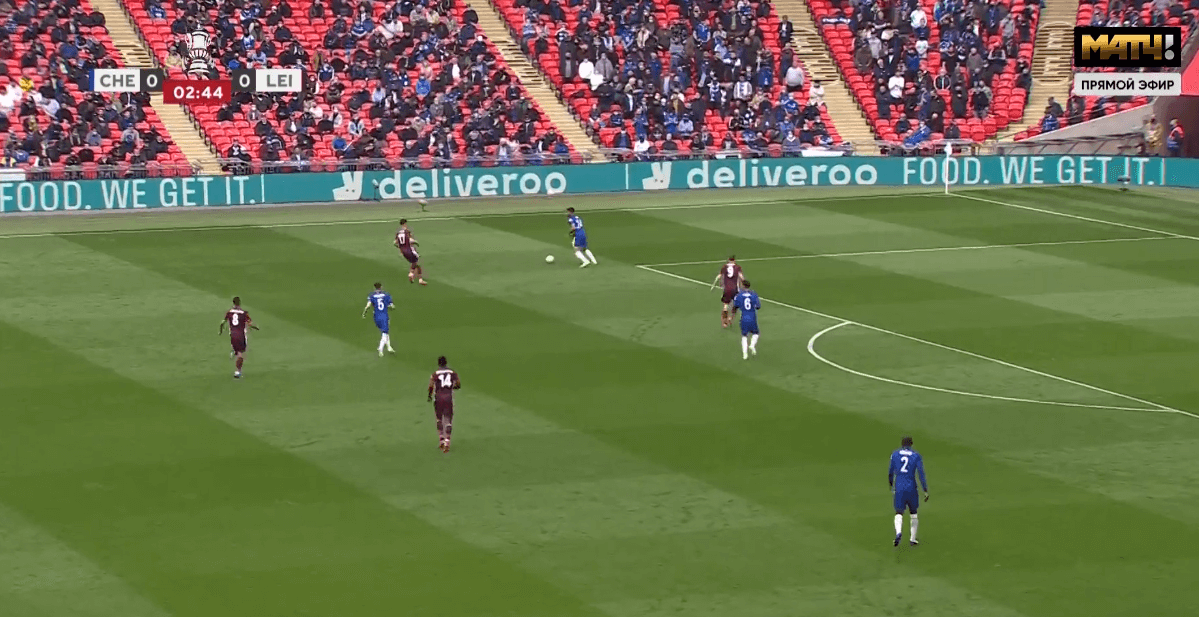 In the example above, we can see Leicester’s high press as Ayoze Perez is tasked with pressing Reece James, Vardy cover shadows Thiago Silva and Tielemans has pushed forward to press Jorginho. This way Leicester have stifled the initial build-up and progression for Chelsea. The idea here is that with their closed body shape that covered the central areas, Leicester would force the Chelsea centre-backs to play it wide to their full-backs where another intense man-oriented press would be triggered like in the image below. Tielemans would cover-shadow Jorginho, Ndidi would closely mark Kante and Thomas would push forward to mark Azpilicueta. 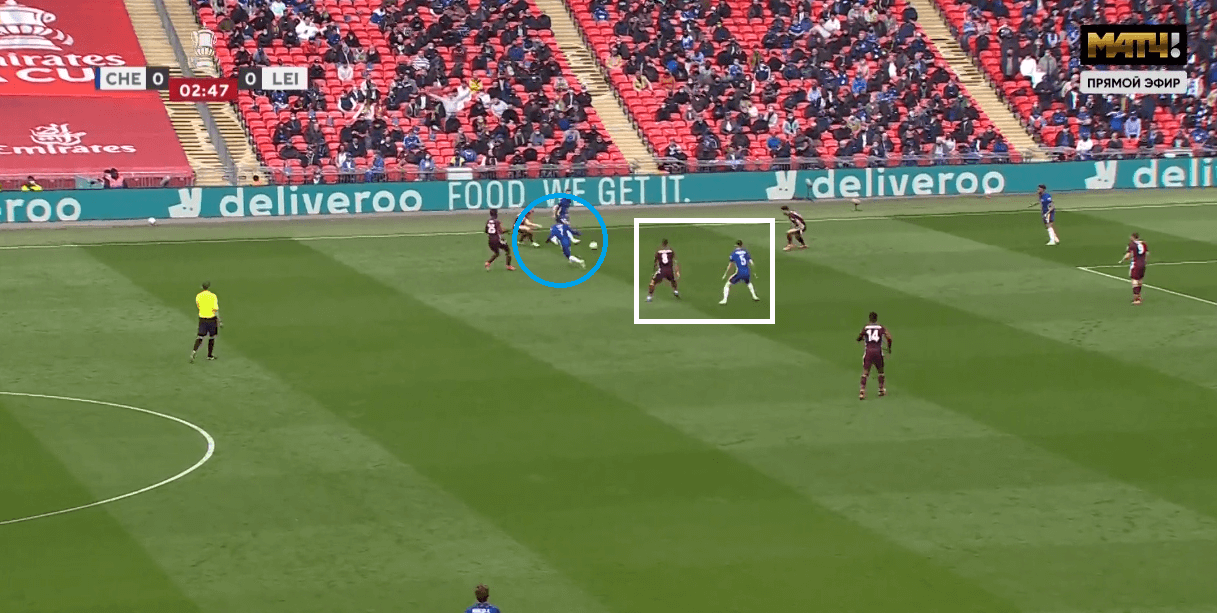 The interesting thing about the man-marking was it was all over the pitch with the 3 centre-backs tasked to closely follow the 3 forwards. Usually teams that press man-man have it flexible to ensure that the opposition don’t catch them out with rotations and decoy runs. But Leicester were willing to take the high-risk, high reward approach to win the ball immediately.

We can see Jonny Evans in the image below tightly keeping tabs on Werner and following him when he dropped deep. This advantage was obviously because of the formation where additional 2 defenders beside him gave him the liberty to go forward. 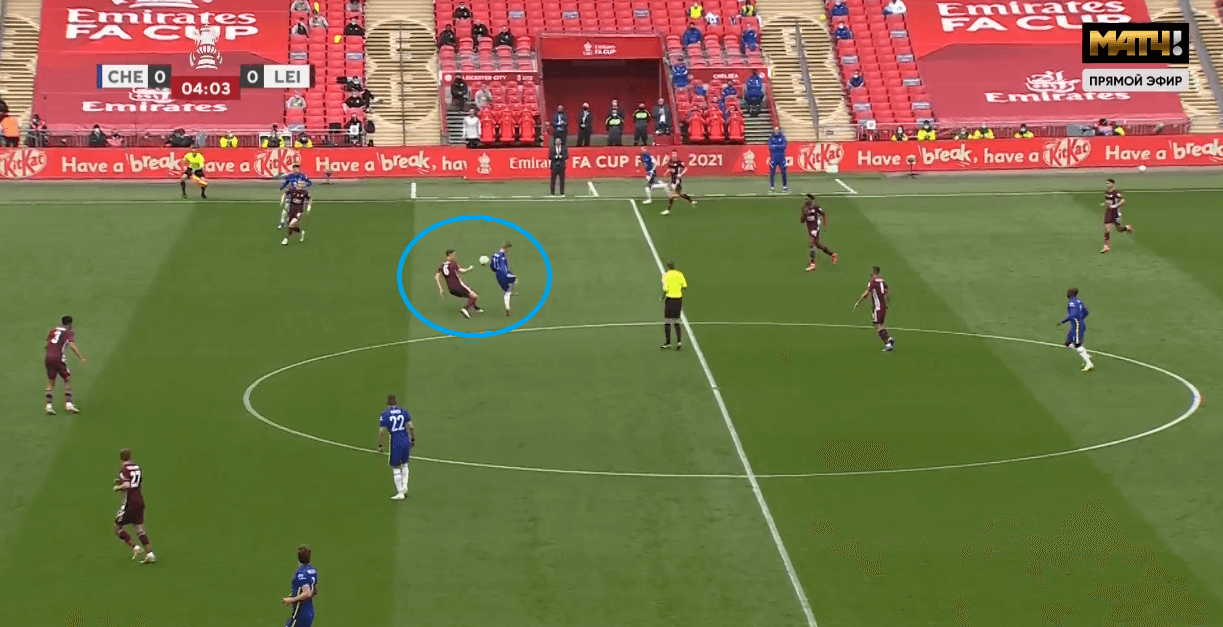 With a mid-block they looked to protect the central areas by blocking the central passing lanes. They formed a pentagonal shape at the centre of the park with their forwards and midfielders. This eventually forced the Chelsea players to go wide. We can see an example of that in the image below. 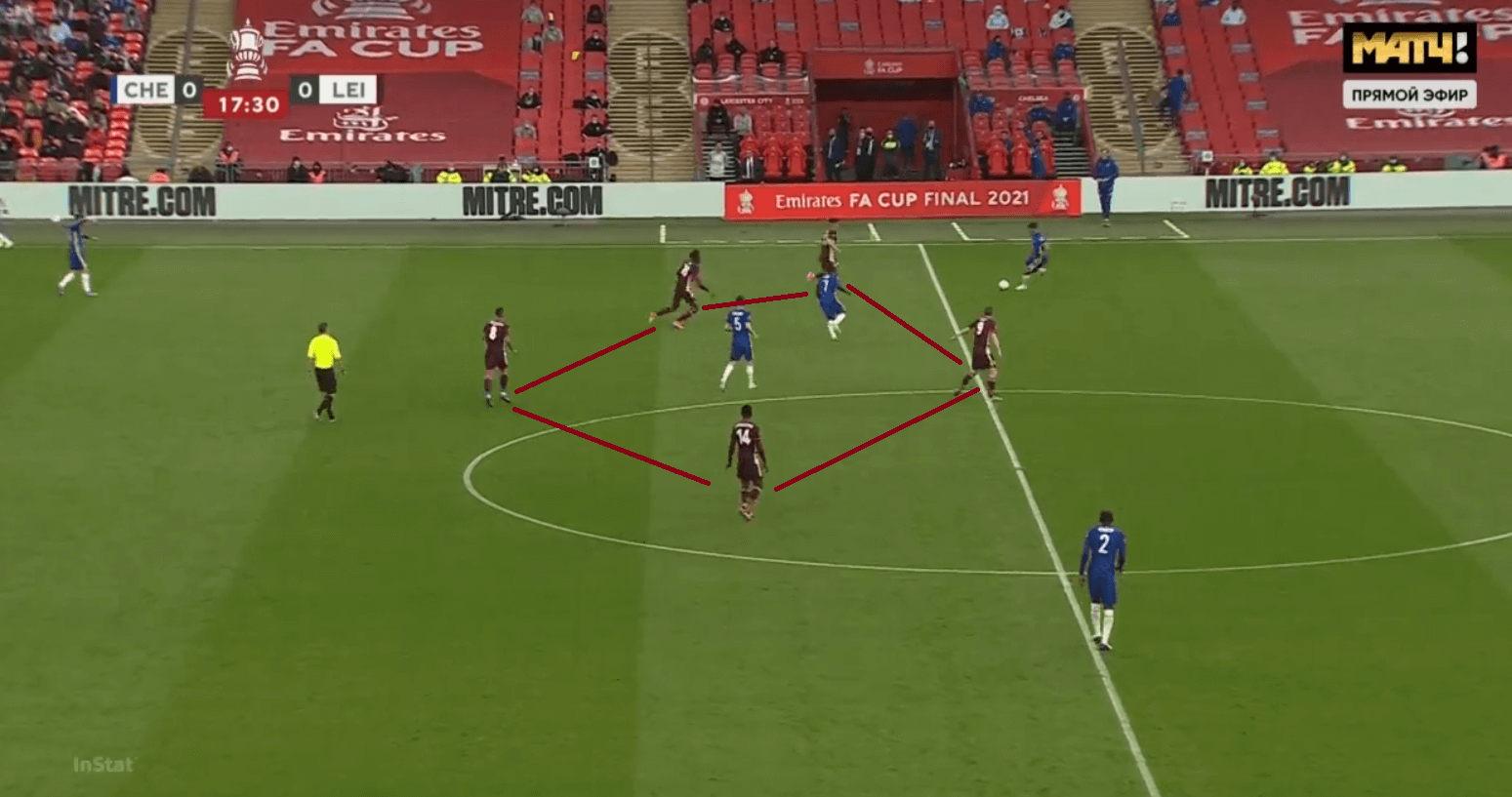 Their low-block had a very good shape with a 5-2-3 shape in front of the goal. The spacing between the centre-backs were good and it covered all the 5 lanes on the pitch equally well. Another thing to be noted here is that Chelsea had the likes of Ziyech, who would not make runs to stretch the defence. We can see him receiving the ball to his feet in the image below and this means that the Leicester defence is not stretched and they can easily control the box by remaining static. 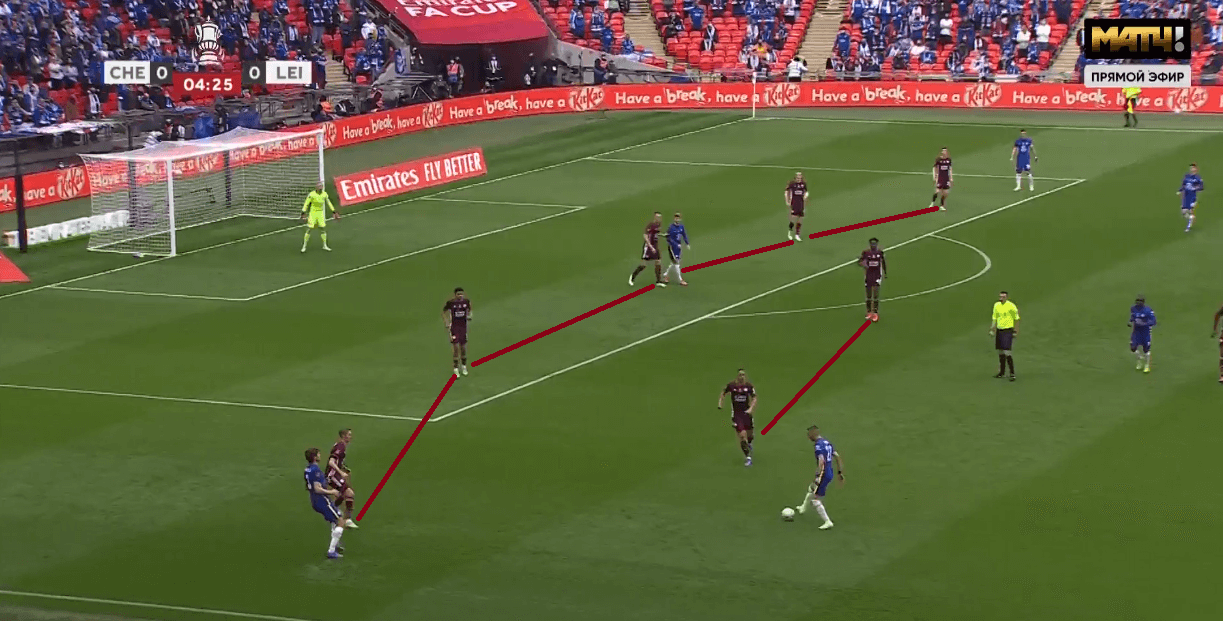 Thomas Tuchel was very much aware of the threat that Jamie Vardy would have posed. It was pretty obvious that Chelsea would be dominating the possession and Leicester would look to threaten them on the break. So Tuchel had to counter this and he switched the positions of Azpilicueta and Reece James. Though James is a better wing-back among the duo and Azpilicuetta being the better defender, Tuchel knew that Azpilicueta would not have the pace to match Vardy in a 1v1 situation. To avoid that he used James, who is much faster than the Spanish veteran. We can see an example of that in the image below where Leicester are on the break and Vardy has started to make a run but James’ pace means that Chelsea were able to stop this. 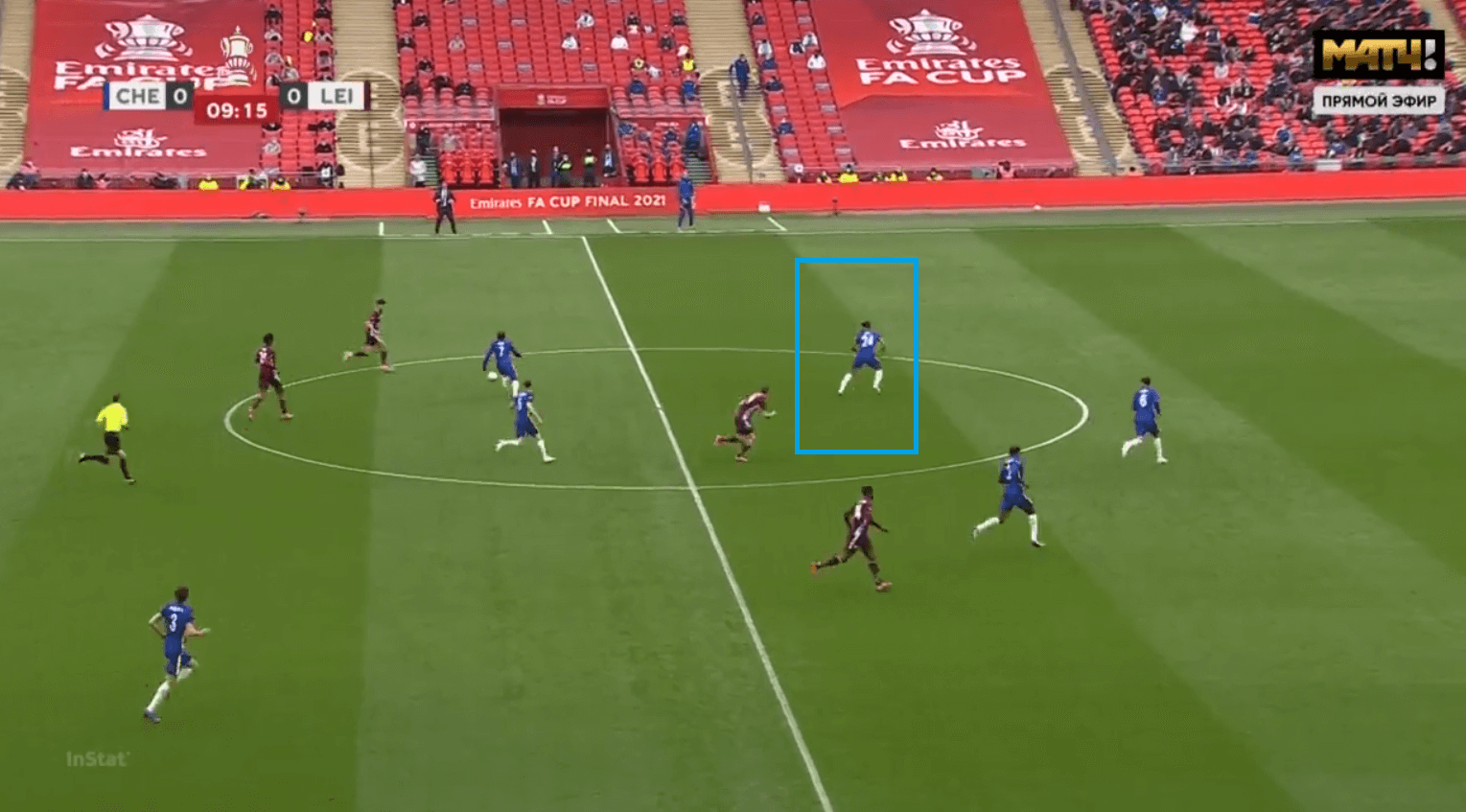 In another example below, Ihenacho drops deep and drags Rudiger out of position. This creates a hole in the backline and Castagne makes an opposite run into space. On the other hand, Vardy makes a run centrally to receive a cut-back if Castagne delivers one. Since James was matching Vardy with pace, he decided to stop his run and take a shot from a much deeper position in the box. His shot was blocked eventually by James and the reason why he was able to block it was because of his ability to get past Vardy which forced Vardy to stop his run as he wasn’t able to outpace him. 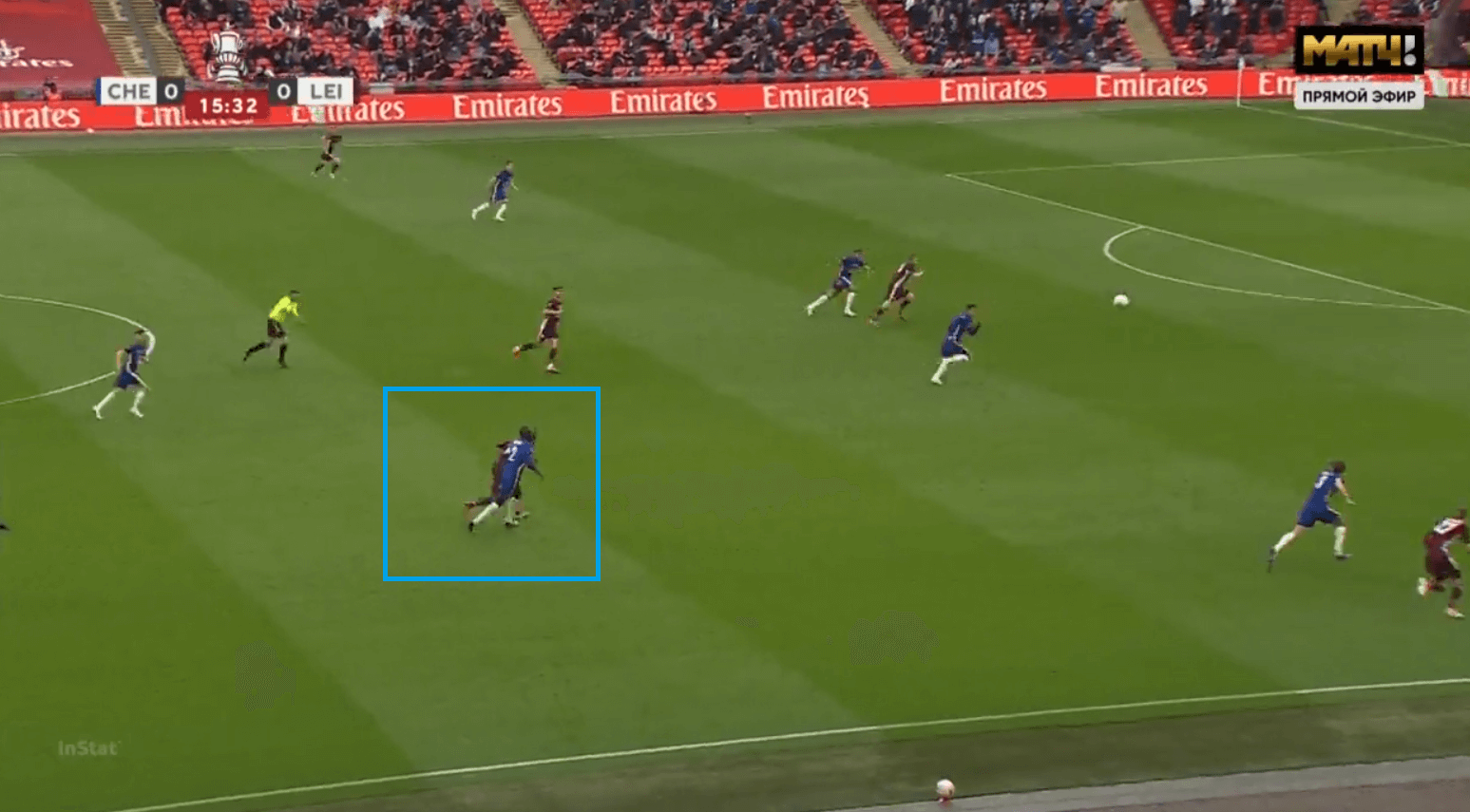 Chelsea’s struggle with possession in the first half

Chelsea themselves were to be partly blamed for their struggles in possession for the first half. The players that Tuchel started weren’t able to provide the solutions against Leicester’s press. Right from their body orientation while receiving the ball to the movements they made, Chelsea made wrong decisions in some situations. In the example below we can see Jorginho receiving the ball from Rudiger, but his closed body orientation means he cannot receive in the half-turn and carry the ball which would have required a single touch. Whereas now he needed another touch to control and then make a turn. This extra touch means Leicester players now had an extra bit of seconds to move forward and press Jorginho who then had to play a safe pass to Silva. 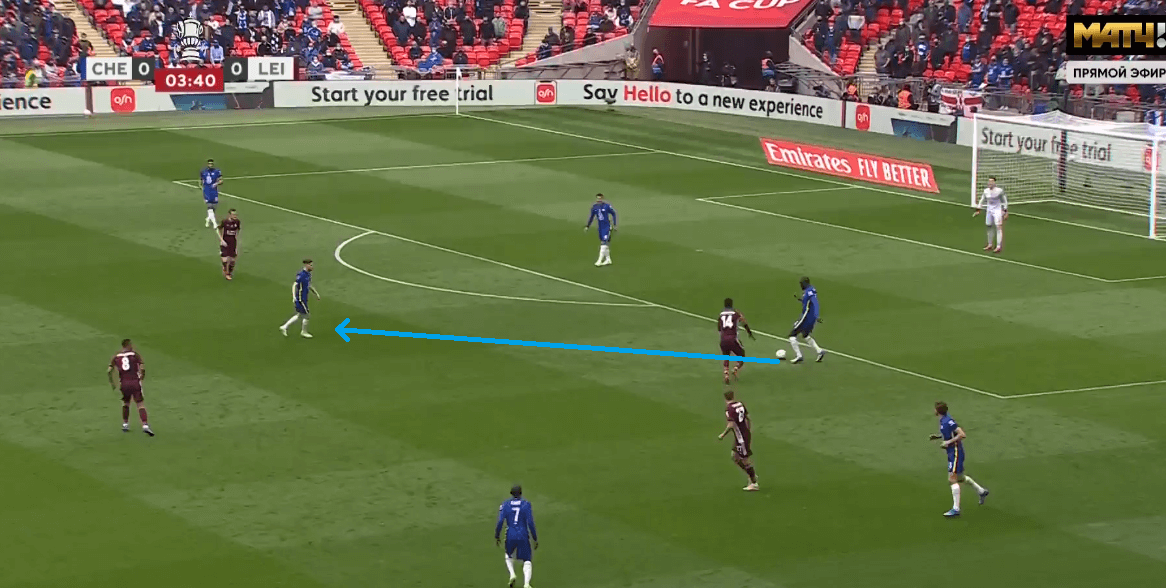 We mentioned how the Leicester City wing-backs pushed high up to press the Chelsea wing-backs during pressing triggers that saw the touchline acting as another defender. Another thing to be noted here was the wing-backs posture when they pressed. They pressed with an outward orientation that stopped the Chelsea wing-backs from playing the ball over the top. This was one of the key strategies that Rodgers deployed as he did not want his players to allow balls played over the wings to the Chelsea forwards. We can see an example of this in the image below where Castagne presses Alonso from an outward angle to stop him from playing the ball. 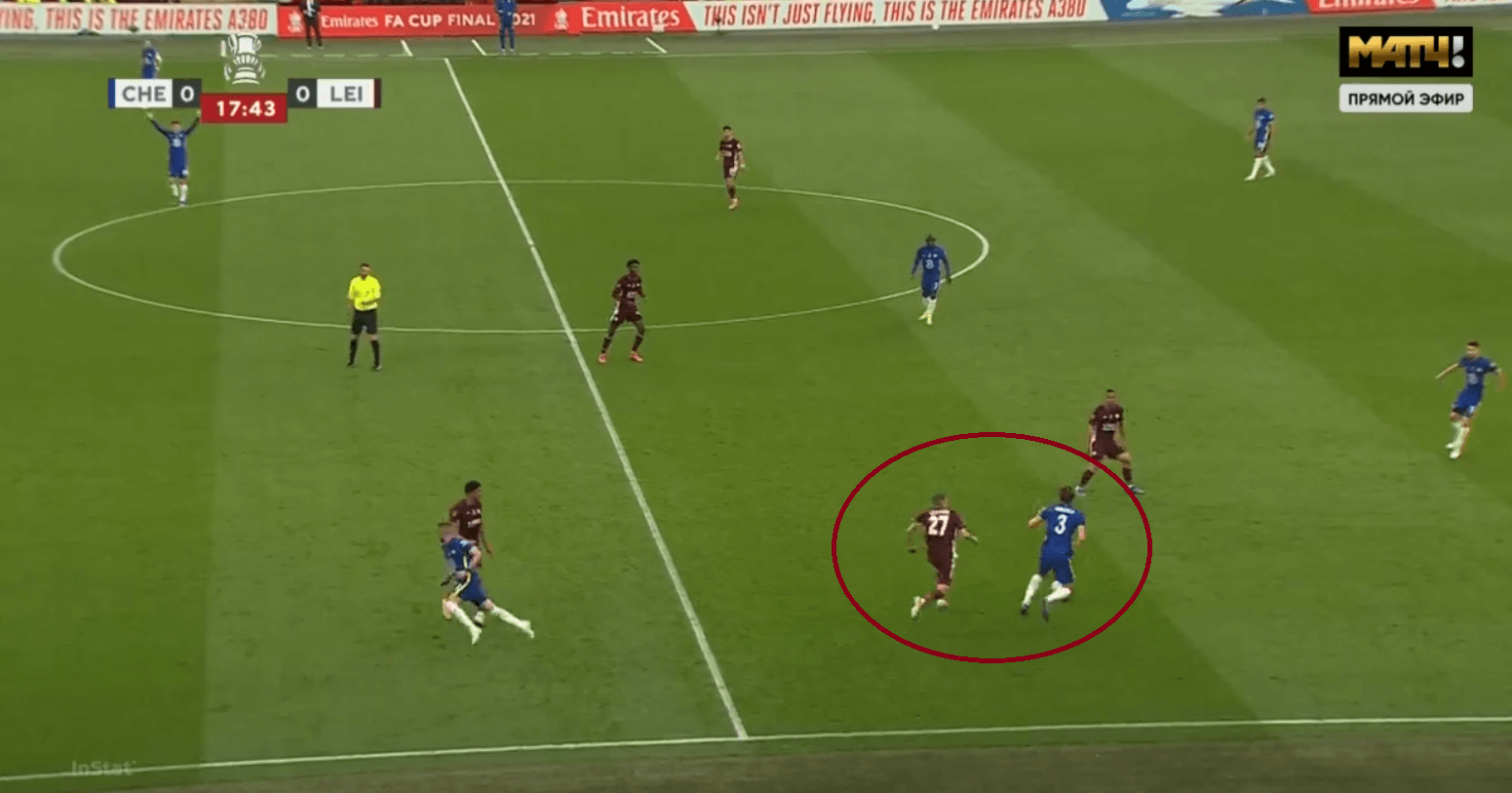 Another problem for Chelsea in these situations was that now Alonso cannot play a natural plass with his left foot and now has to make a pass with his weaker foot. We can see Mount in the image signalling to Alonso to play him a ball but the Spaniard was initially uncomfortable in playing those with his weaker right-foot.

Mostly Chelsea had to skip the second phase of progression by going direct to their forwards as they were uncomfortable with playing out against Leicester’s press like in the image below. So mostly they used Leicester’s press as a bait by luring them to their own third and launching a long ball to their forwards. Mostly Chelsea were successful in this as they kept winning the second balls from these passes and with the space in front of the Leicester defence kept growing as they pushed forward. But as the game progressed, the Leicester players found it easy and defended these situations well enough. 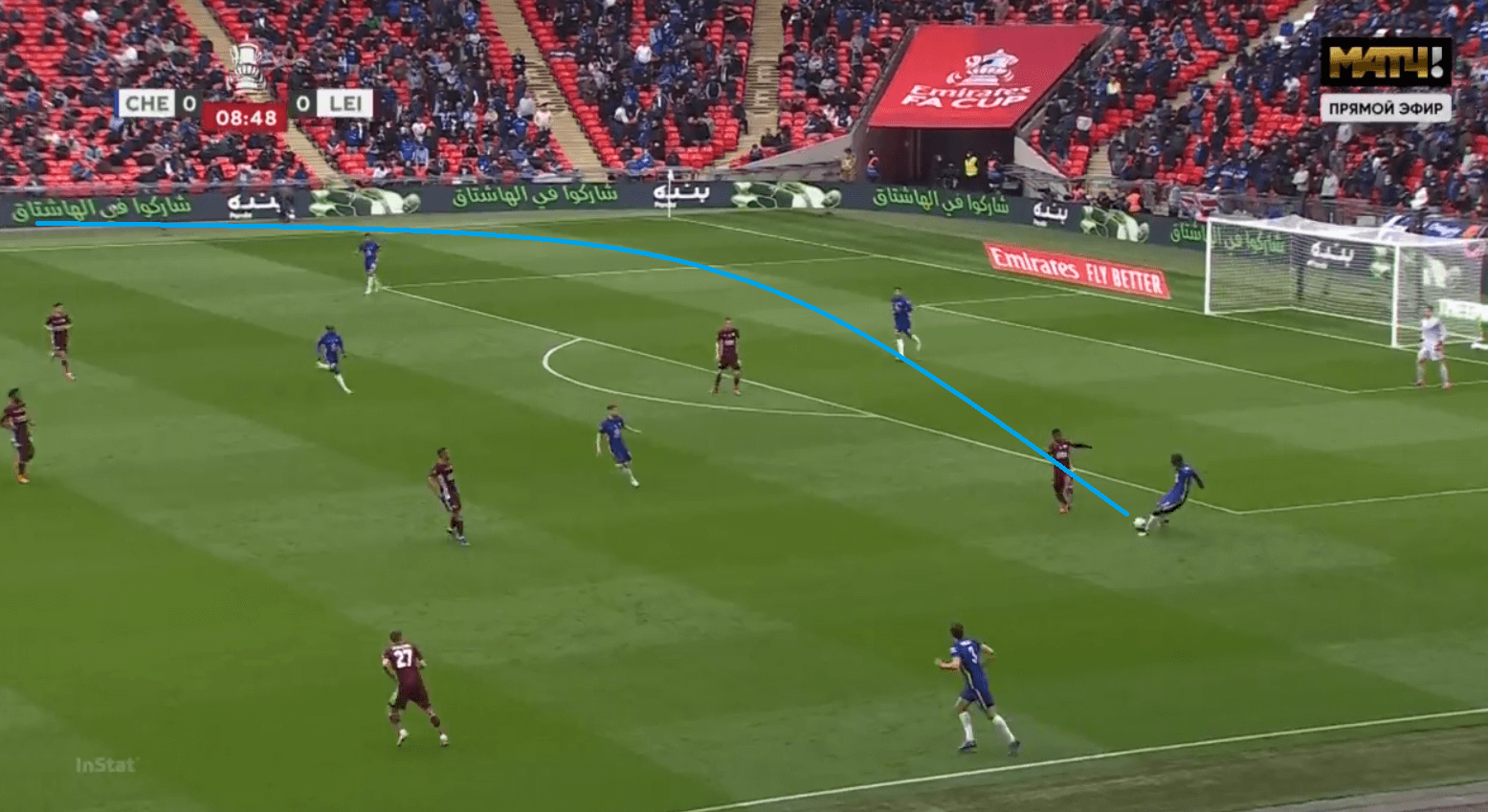 Despite averaging the lion’s share of possession in the first half, Chelsea were unable to create clear cut chances to take the lead. Most of the time they had to rely on shooting from the distance as they failed to test Kasper Schmeichel in the 1st 45 minutes. Tuchel decided to make some adjustments to his side by asking them to be more brave on the ball and start making more 3rd man runs and rotations. In the example below we can see Kante in the wide regions now this pulled both Tielemans and Ndidi out of their position and as they followed Kante, it created gaps in the central regions. These situations slow started to appear and Chelsea continued to gain momentum in the second half.

In another example where something similar to this happened where both Jorginho and Kante now move to the wide regions that prompted both Tielemans and Ndidi to move along with them. This opened a passing lane for Jorginho to Ziyech and the Moroccan could now drop deep and receive the ball in space. 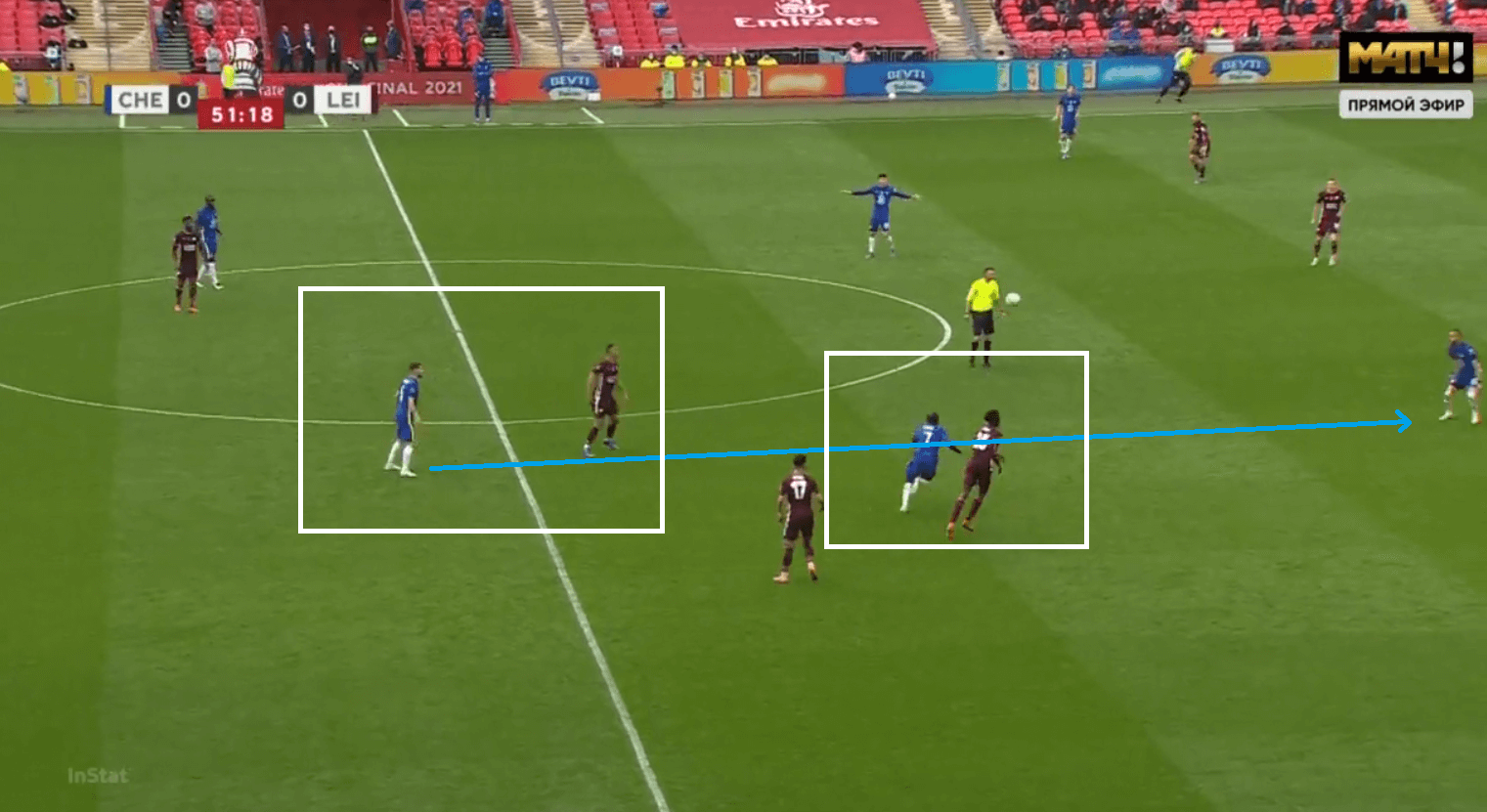 With Kante and Jorginho continuously manipulating the Leicester midfielders by dragging them out of position, Rodgers advised them to be more disciplined with their positioning and not follow them. This again gave them another trade off as now both Jorginho and Kante weren’t marked and were given the time and space to receive the ball. We can see an example of this below where now both Ndidi and Tielemans have decided to stay centrally. This means that Jorginho receives the ball without anyone pressurizing him and Kante makes a 3rd man run into the space behind Thomas. Ndidi signals Soyuncu to track Kante but even he can’t leave his positions as Ziyech would then make runs into the space vacated. Jorginho eventually finds Kante with a ball and the Frenchmen put in a cross into the box. 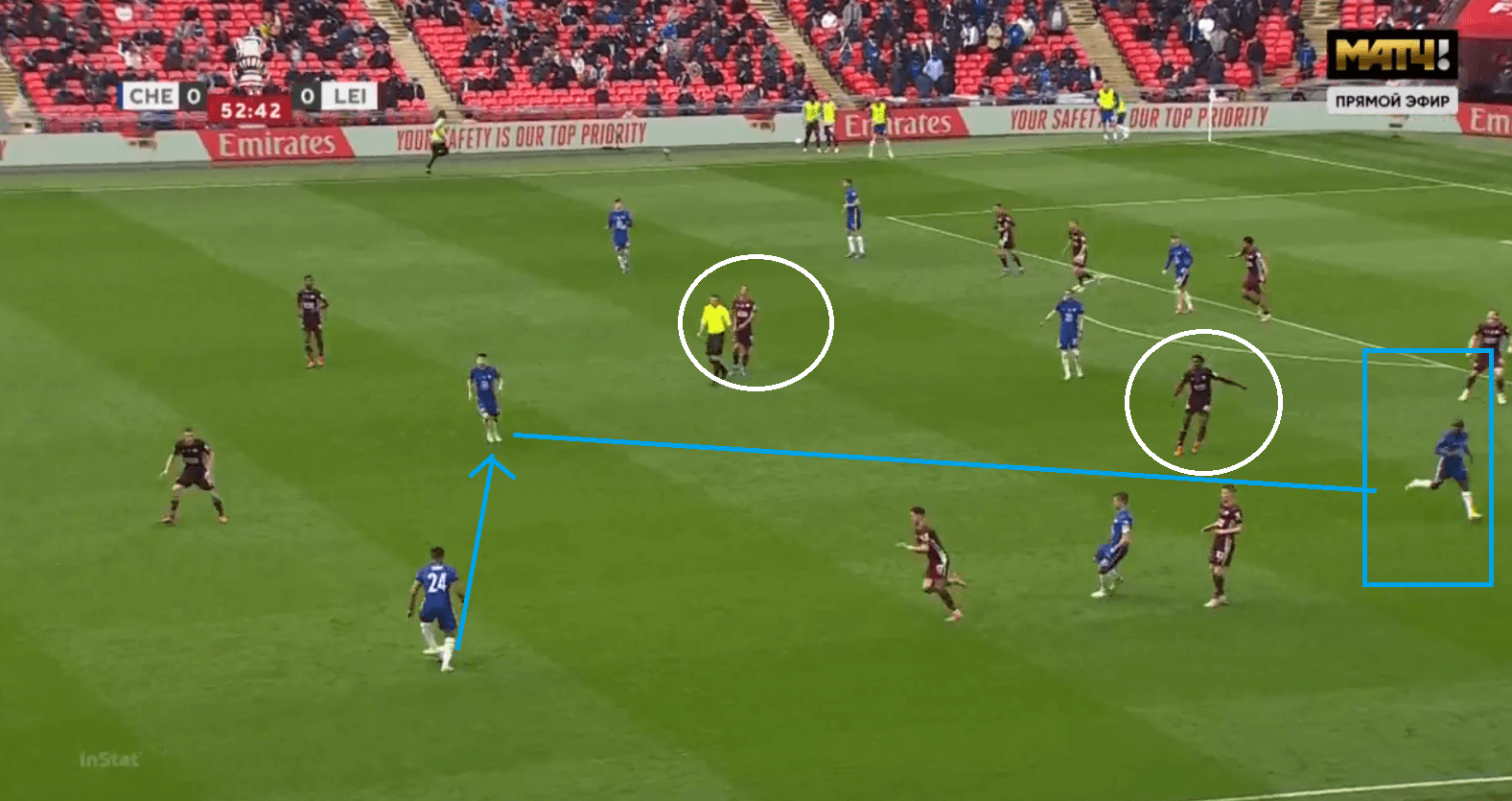 With Tuchel bringing in Pulisic and Havertz, their fresh legs caused much more issues to the Leicester backline. Chelsea released Pulisic with some neat patterns initially and his gravity on the ball attracts a lot of Leicester players around him. Onto his right, we can see 3 Chelsea players creating a 3v1 against Soyuncu and Mount on the far side is signalling for the ball. Pulisic didn’t notice him and had he released the ball to him sooner, Mount would have played a first-time pass to one of the three players. 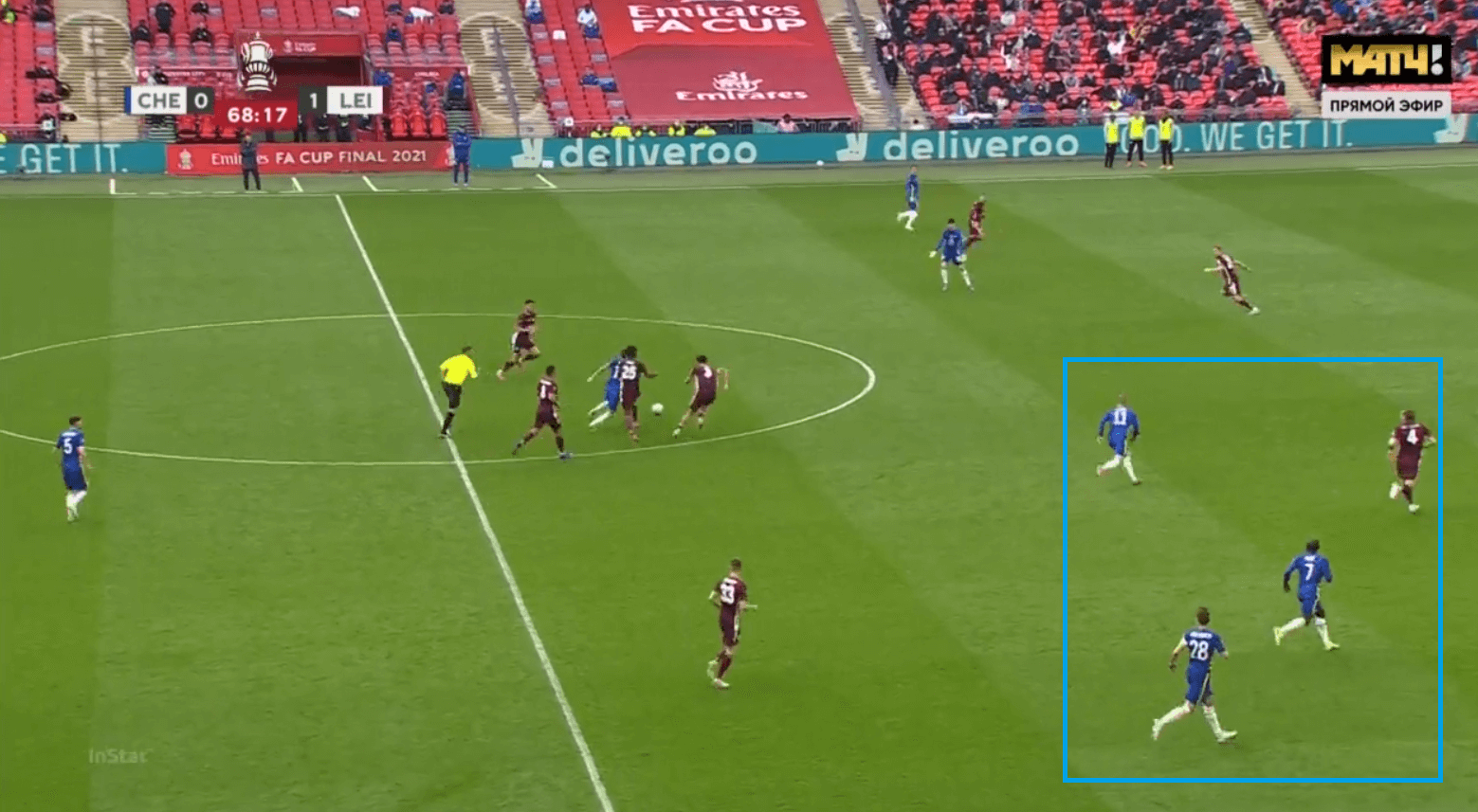 Rodgers knew that with Tielemans and Ndidi being dragged higher it paved the way for the likes of Kante to make a run in behind. So he asked Ayoze Perez on the left-wing to stay a little deeper and not over commit to the press. His staying deeper meant that he was able to close the passing lane to Kante while Ndidi was able to stay deeper. This also eventually led to their goal as Ayoze’s positioning meant that he was able to intercept the ball. Soon Tielemans received the ball and scored a screamer to give Leicester the lead. 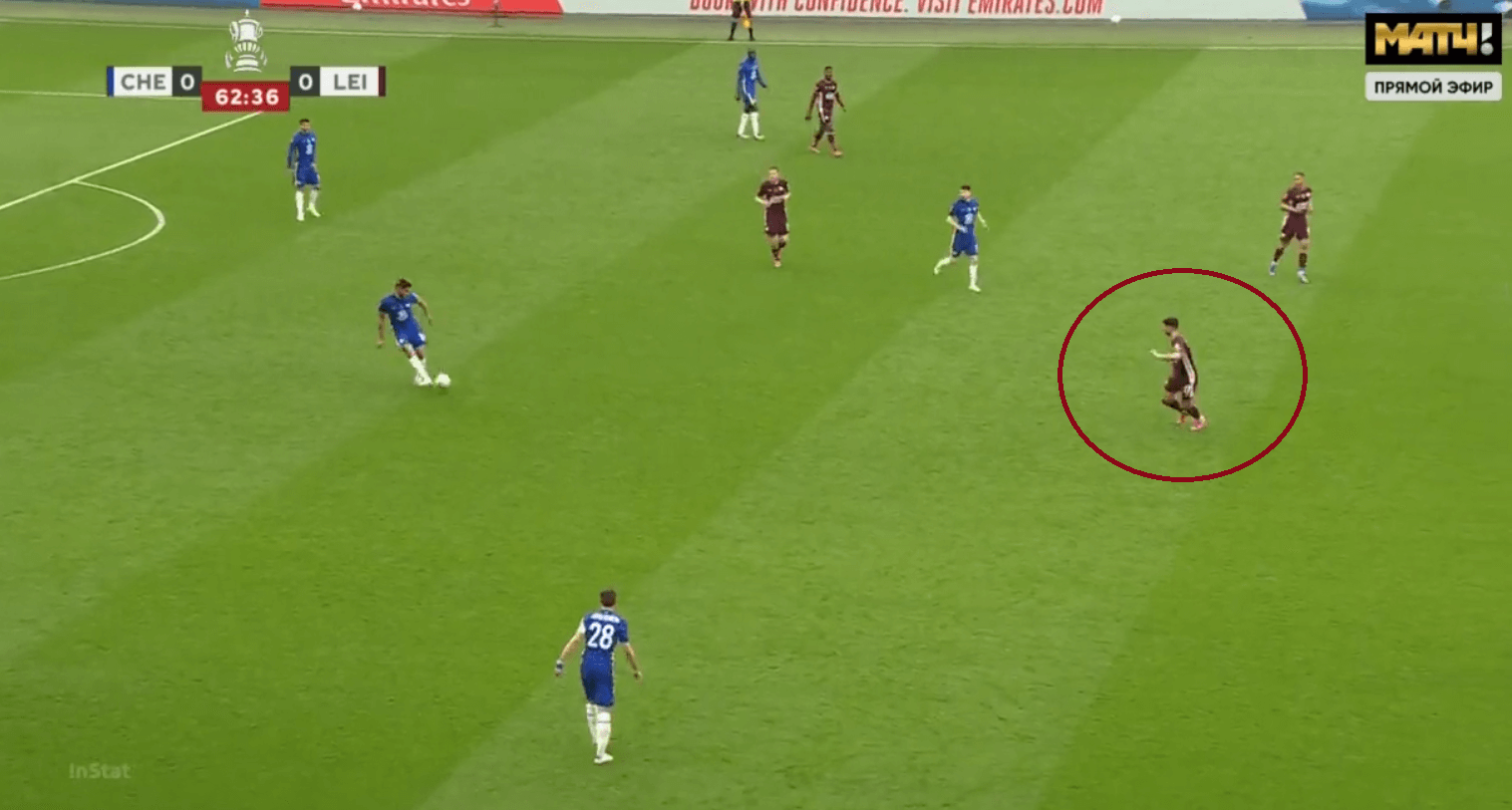 Rodgers then brought on defenders and added physicality to his defence as Chelsea brought the likes of Giroud and Havertz. Wes Morgan was brought in to add another defender to the backline as Chelsea started to attack with 6 men like in the image below. 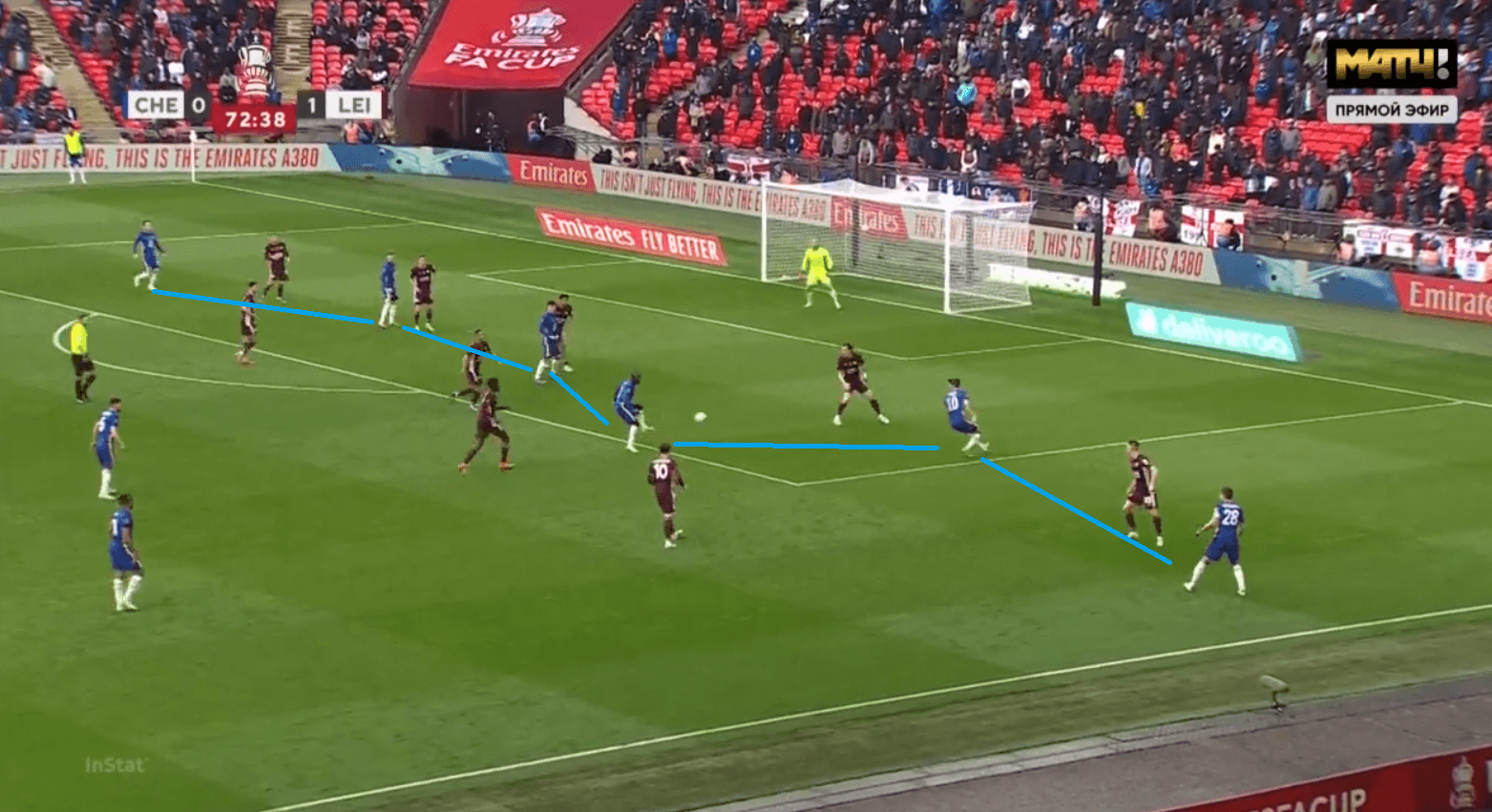 In the end, Leicester were able to hold onto their lead despite some nervy moments where their keeper Schmeichel pulled off two world-class saves to keep them in the game. Also, they survived when VAR intervened to cancel out a goal for Chelsea. The win means Leicester City clinched their first FA Cup trophy and their first major one after winning the league in 2016.