As the Premier League season hurtles towards its conclusion, it may seem as though the last few rounds of matches are devoid of any significance, since all the major issues and questions have been resolved. Manchester City have been crowned champions, the bottom three have all been relegated with three rounds of fixtures to go, which is the earliest this has ever happened in a Premier League season, while most of the European places have been decided as well. However, it is not all determined yet – there are still Champions League, Europa League and Europa Conference League spots up for grabs, even if that last tournament may be something teams try to avoid rather than qualify for, and Leicester City’s visit to Old Trafford to face Manchester United would prove to be a pivotal clash in this context.

This tactical analysis piece will consider both sides’ tactical approach in this match, providing context around United’s defeat that confirmed Manchester City as champions, as well as pointing out recurring errors from the home side, while also showing how and why Leicester’s setup was effective. 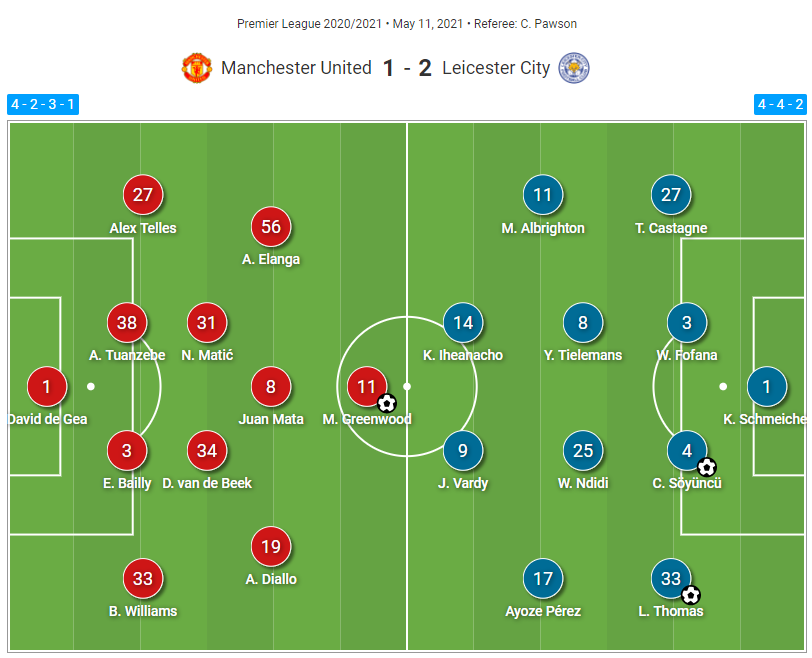 Ole Gunnar Solskjær had already indicated that United’s hectic schedule would see him make wholesale changes for this match, ahead of a marquee clash against Liverpool just two days later, and so it proved, as he made 10 changes to the side that defeated Aston Villa at the weekend. David de Gea returned between the posts behind a completely new back four, as Brandon Williams, Eric Bailly, Axel Tuanzebe and Alex Telles lined up in defence. Donny van de Beek received a rare start in midfield alongside Nemanja Matić, with Juan Mata as the playmaker, while 18-year-old Swedish winger Anthony Elanga made his debut. January signing Amad also received his first appearance in the league, while Mason Greenwood was the only player retained from the weekend’s XI.

Brendan Rodgers also made a few changes to his side with one eye on this weekend’s FA Cup final against Chelsea. Jonny Evans was still injured, which meant that Rodgers changed to a back four, with Luke Thomas coming in at left-back, Timothy Castagne moving to right-back from the centre-back role he played in the last game, and Wesley Fofana and Çağlar Söyüncü as the centre-backs. Marc Albrighton and Ayoze Pérez were the wingers, while Kelechi Iheanacho and Jamie Vardy continued upfront.

Leicester City had changed their shape from previous matches for this encounter – Evans’ absence, coupled with the shocking manner in which their rejigged back three collapsed against Newcastle United at the weekend, meant that Rodgers moved to a back four and a 4-4-2 shape for this match. There were tactical reasons for this as well – the Leicester boss wanted two strikers up front to prevent United from being able to pass easily to their central midfielders in the build-up, while having wingers in front of his full-backs would prevent the Foxes from being left outnumbered in wide areas, which would have been the case if they would have played with a back three and wing-backs.

The away side’s press was quite effective, especially in the early stages, as they stopped United from being able to progress the ball centrally and forced them out wide, where they would then spring pressing traps to try and win the ball back. 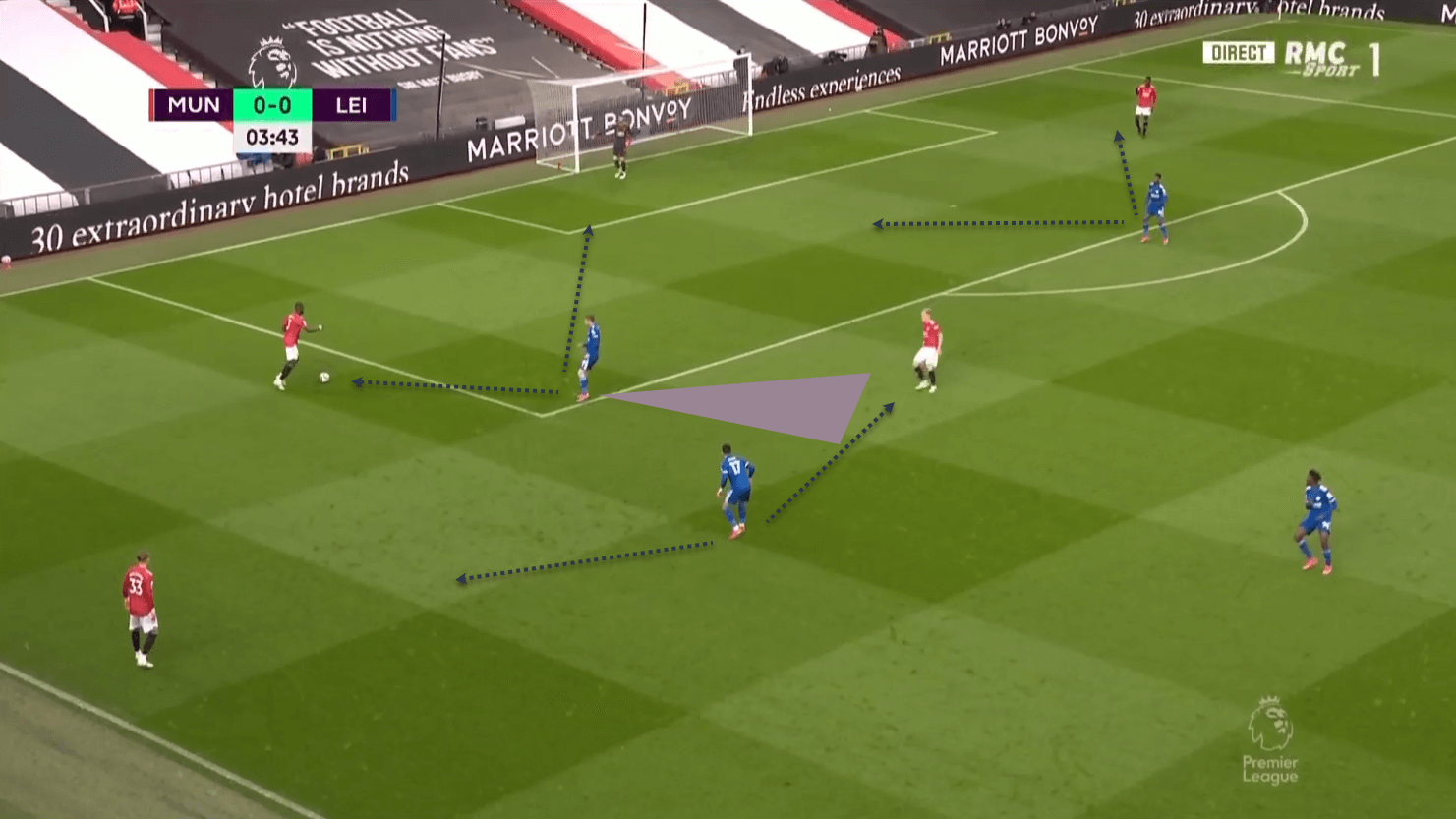 Vardy and Iheanacho would focus on pressing the two centre-backs, Bailly and Tuanzebe, while also trying to position themselves in a manner where their cover shadows would prevent passes into van de Beek and Matić. Pérez would also stay central, depending on the position of the ball, waiting to jump to van de Beek if the ball was played to him, or move wide to pressure Williams if he received possession. 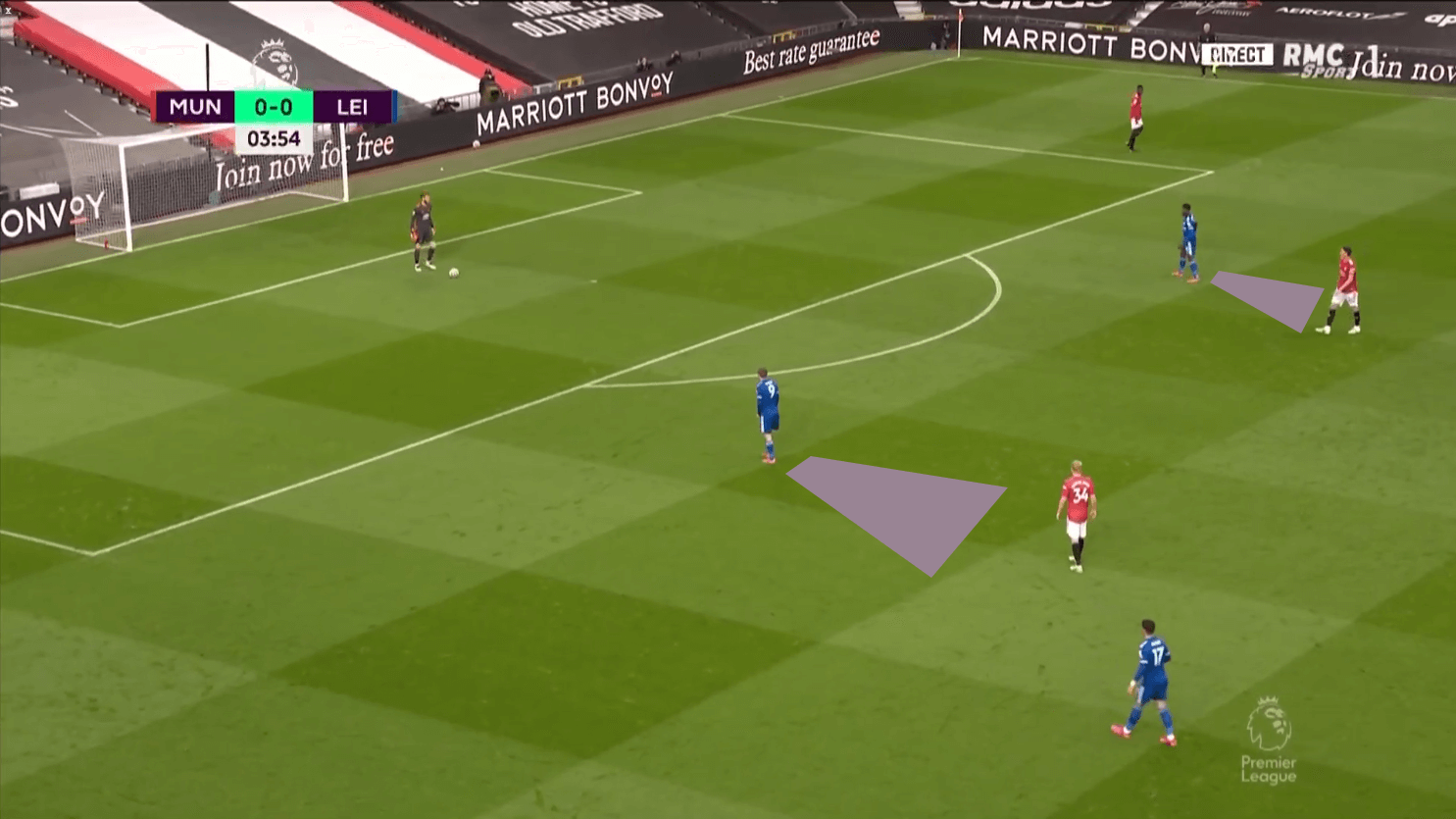 Here, we can see how both Vardy and Iheanacho are using their cover shadows to prevent either of United’s midfield pivot from becoming a passing option for de Gea.

This caused issues for the home side, and forced them wide on multiple occasions, where Leicester were able to win the ball back and counter-attack immediately.

Around 20 minutes into the first half, the United manager responded to this tactic by moving Matić into the backline to form a back three in possession. This created a 3v2 for United in that zone and meant that the Leicester strikers now found it far more difficult to press the backline effectively, and gave the home side a route out of this pressure. This was accompanied by Juan Mata dropping into the midfield from his number 10 role to maintain the double pivot alongside van de Beek, while Greenwood would also move slightly deeper as well. 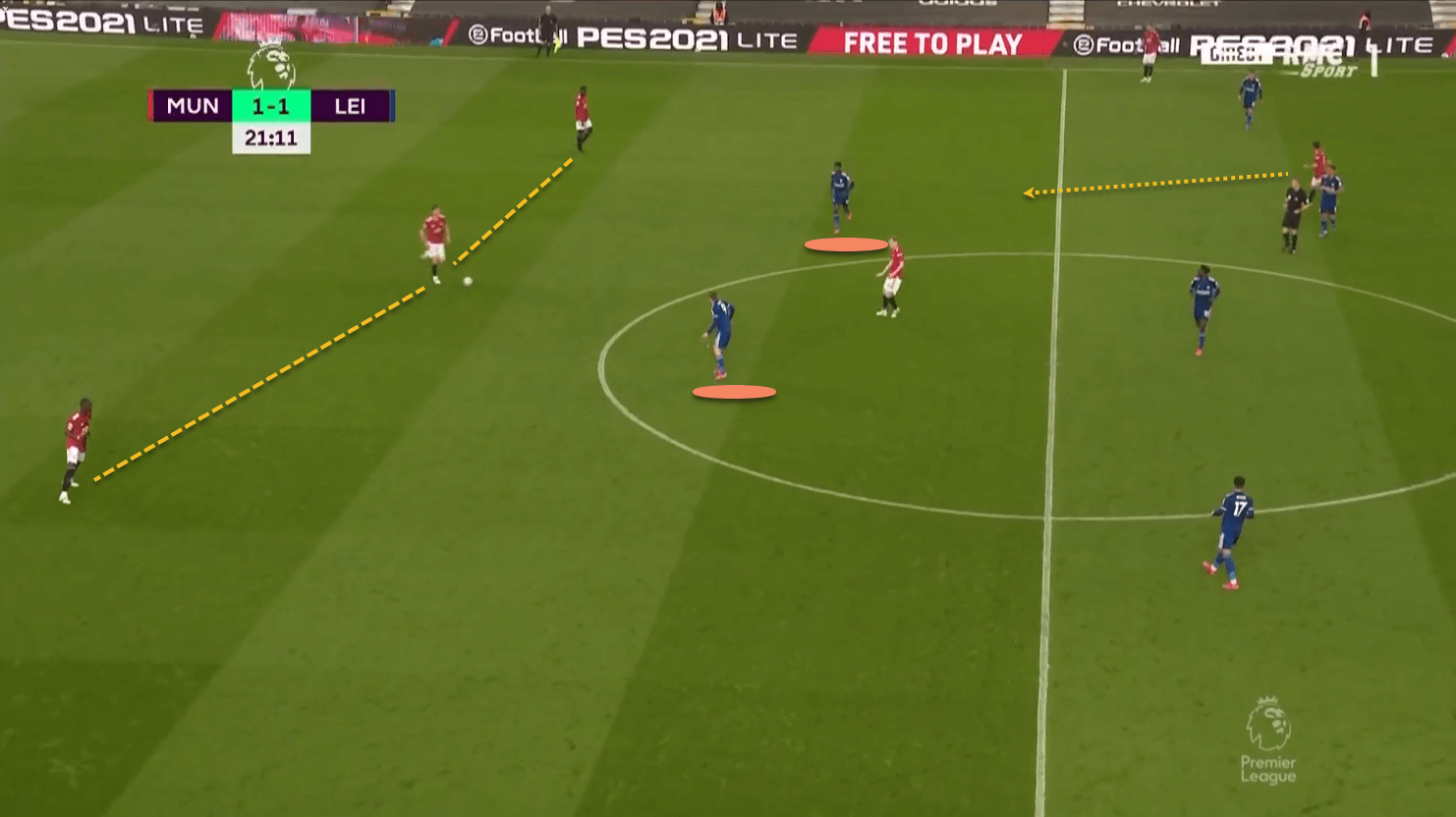 The Serbian has dropped into the backline to create a back three here, with Mata moving into midfield as well.

Note where Vardy and Iheanacho are positioned – the duo quickly understood this tweak from United, and concentrated on staying central and continuing to deny central passing options for the man on the ball.

Thus, there were a few further tweaks made to try and create opportunities to penetrate Leicester centrally – one of this was to have Matić drop into the backline as the left-sided centre-back, rather than in the centre of the trio. 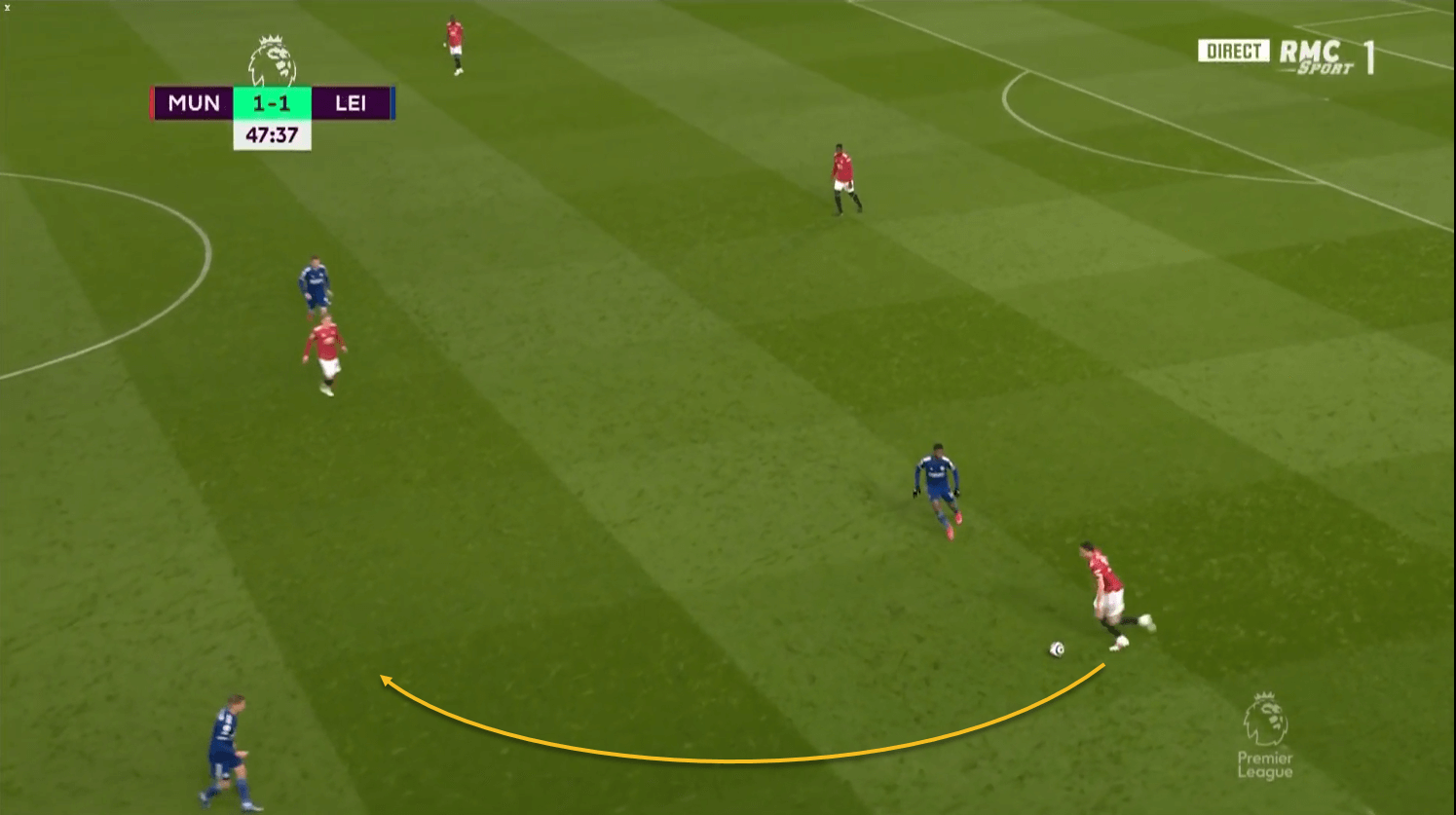 This allowed the United captain on the night to progress the ball into midfield centrally through his dribbling ability. This was quite reminiscent of the way Harry Maguire moves upfield with the ball from similar positions – his absence due to an ankle injury robbed United of one of their best progressive options from deep, not to mention his defensive and leadership qualities, and Matić’s use in this role could be an interesting way for Solskjær to try and plug this gap while Maguire recovers.

Another effect of this tweak was that United tried to utilise the wide areas quite frequently as well. The following image, which breaks down United’s positional attacks horizontally across the pitch, makes their reliance on the left quite clear – 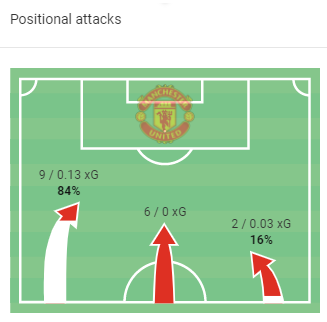 The Red Devils have generally been a side that favours the left flank, but it was quite intriguing that this tilt persisted even in the absence of the likes of Luke Shaw, Paul Pogba, Bruno Fernandes and Marcus Rashford, who all tend to gravitate towards that side of the pitch. Leicester also aided this – their focus on preventing central progression meant that the wingers would be tucked in, which allowed Telles, and on rare occasions, Williams, to receive the ball in space. 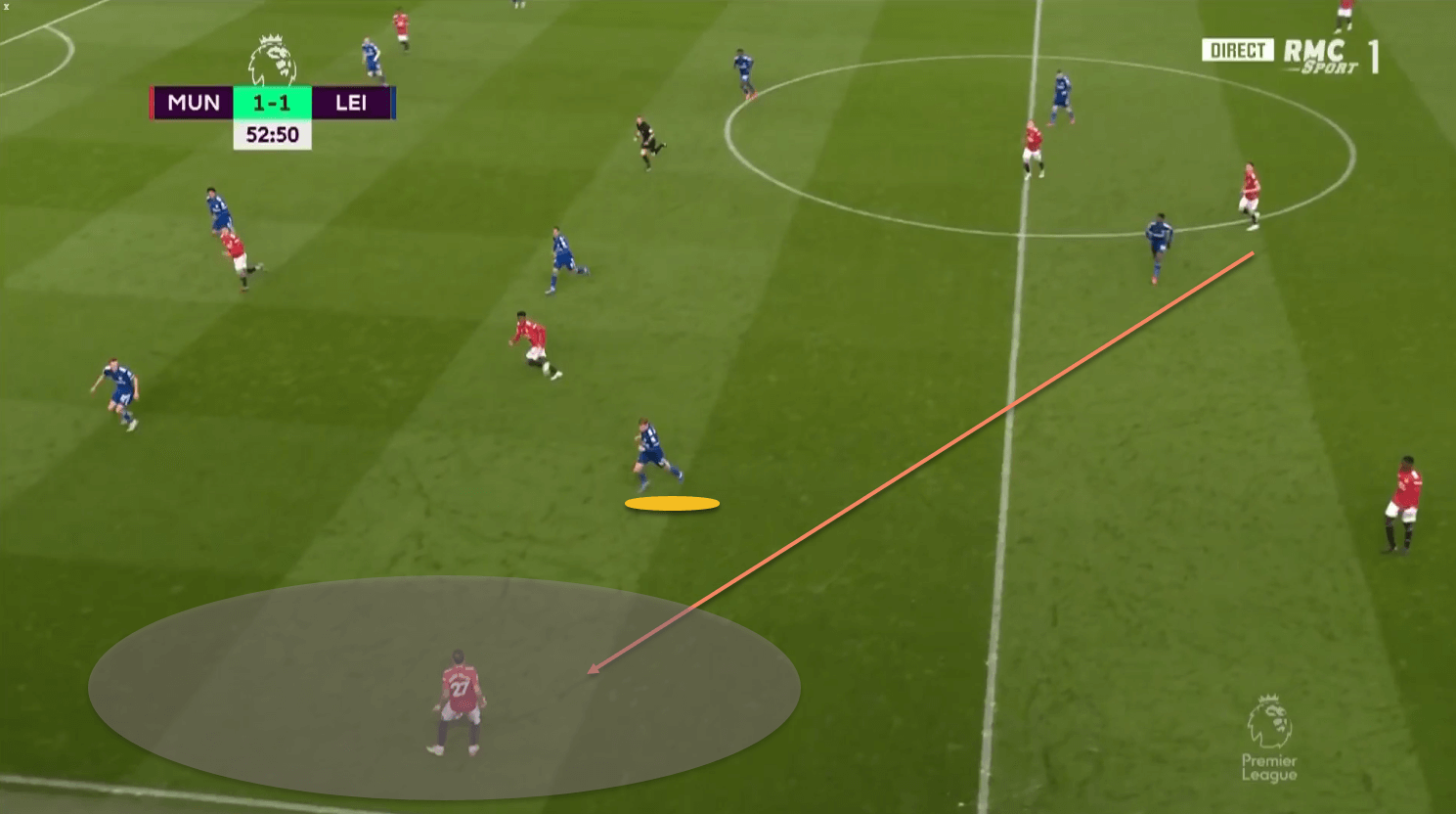 Note Albrighton’s positioning – he was quite central which allowed the Brazilian left-back to receive possession from Matić in space near the left touchline.

United were playing two callow youngsters on the flanks in Elanga and Amad, and while the latter played a big role in Greenwood’s goal, as he ran in behind the Leicester defence on the right before passing to the United #11 for a smart finish, Elanga was slightly more reserved. The Swede’s inexperience also stood out, as the immediate aftermath of the situation in the above image shows – 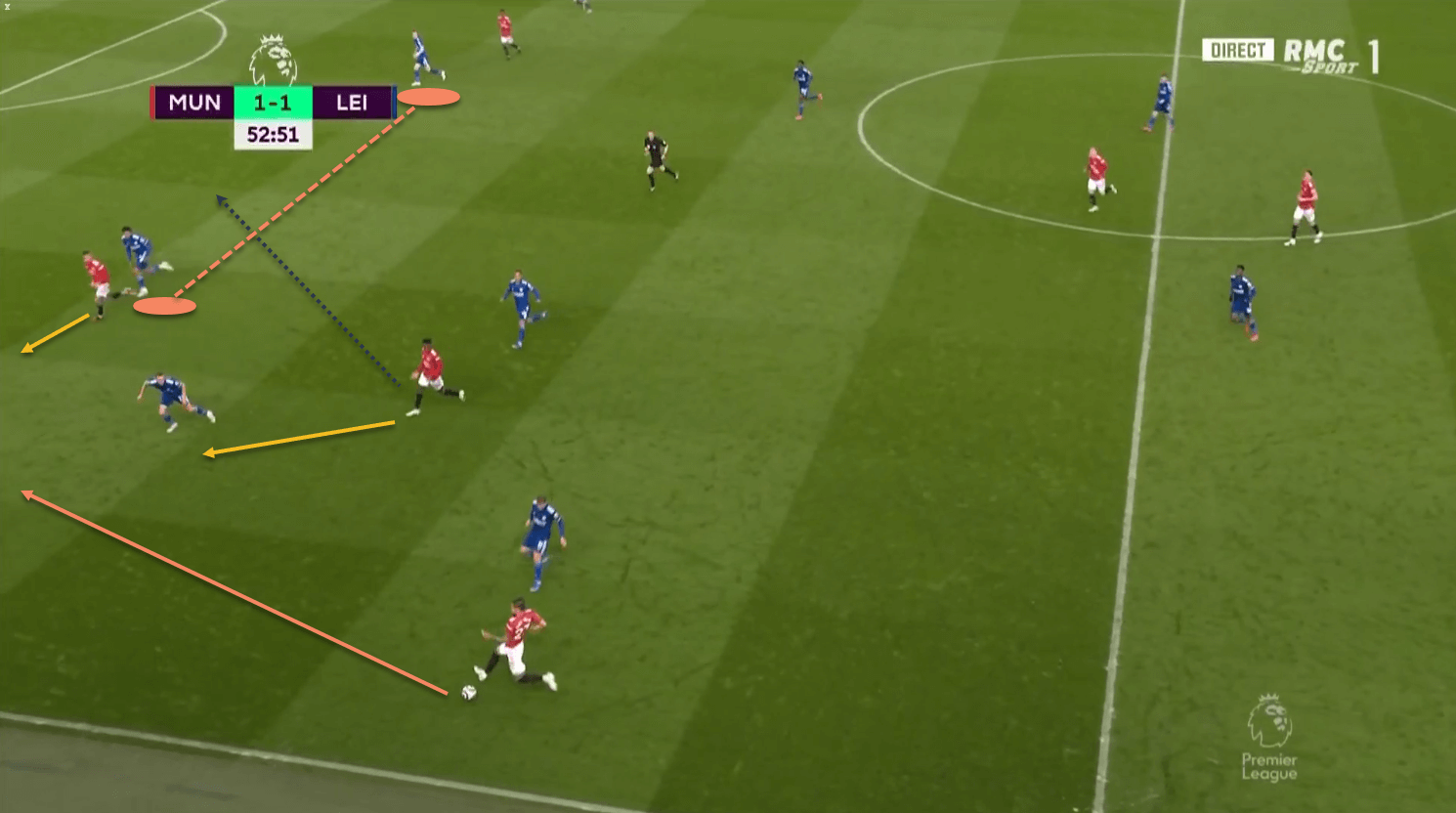 Telles assesses his options once he is on the ball, with Greenwood and Elanga both making runs from in to out towards the left touchline. The left-back chooses to pass down the line to Greenwood, who earns a free-kick after being fouled by Fofana. However, notice the gap that Greenwood’s movement has created between Fofana and his centre-back partner, Söyüncü, on the other side. A better move from Elanga would have been to dart into that space – Youri Tielemans would not have been able to keep up, and Telles could have played a direct pass over the top to him in a threatening position, or he could have received the ball from Greenwood.

This sort of mistake is to be expected from an 18-year-old making his first appearance for the senior side, and Elanga was quite competent throughout this match. United are quite used to manipulating the wide spaces to progress up the pitch this season, especially down their left flank, and this was therefore quite familiar for fans. However, a couple of other familiar traits were responsible for the goals they conceded in this match.

United get sucked in and sucker-punched

A constant issue with United this season, especially in midfield, has been the players’ tendency to get attracted to the opposition player on the ball and therefore leave space in behind for runners to exploit. In fact, they conceded against Leicester earlier this season in the FA Cup sixth round in exactly this manner, where Matić got sucked in and left space for Tielemans to advance and score from outside the box, and the Serbian was partly at fault for Leicester’s opening goal as well, along with Tuanzebe, as we shall see. 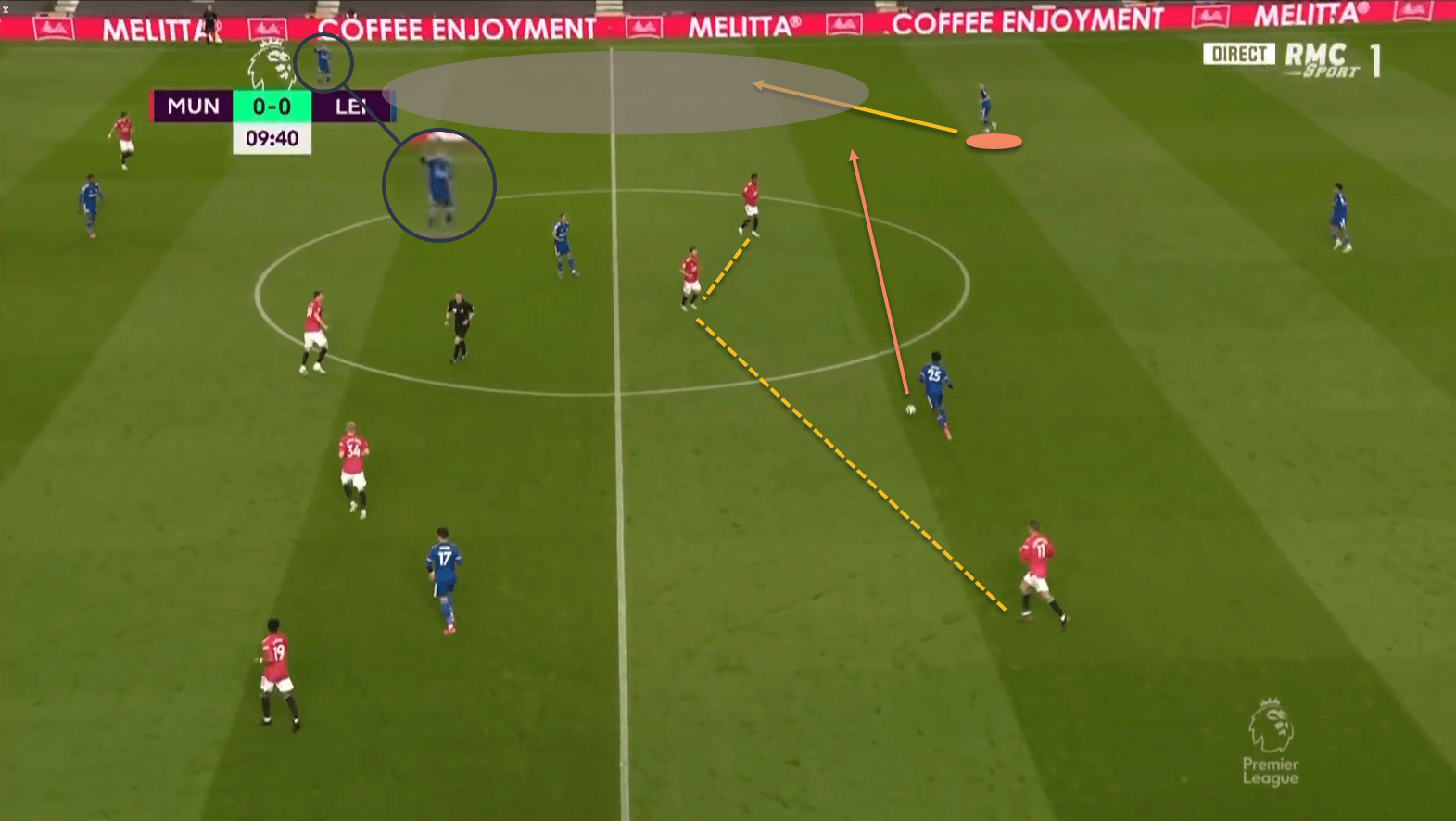 The home side pressed in an asymmetric manner – Greenwood, Elanga and Mata would form a narrow front three, with Diallo dropping back to join the midfield line. The narrowness of United’s first line meant that there was space out wide in Leicester’s defensive and middle third, and in the build-up to their opening goal, we can see how much space Castagne has to advance into. The Belgian would sometimes drop in to play as the third centre-back when the Foxes were in possession, and it was from this sort of position that he was able to receive the ball from Wilfred Ndidi and drive forwards. Also note how Albrighton (magnified) is already in space on the right and calling for a direct pass from Ndidi. 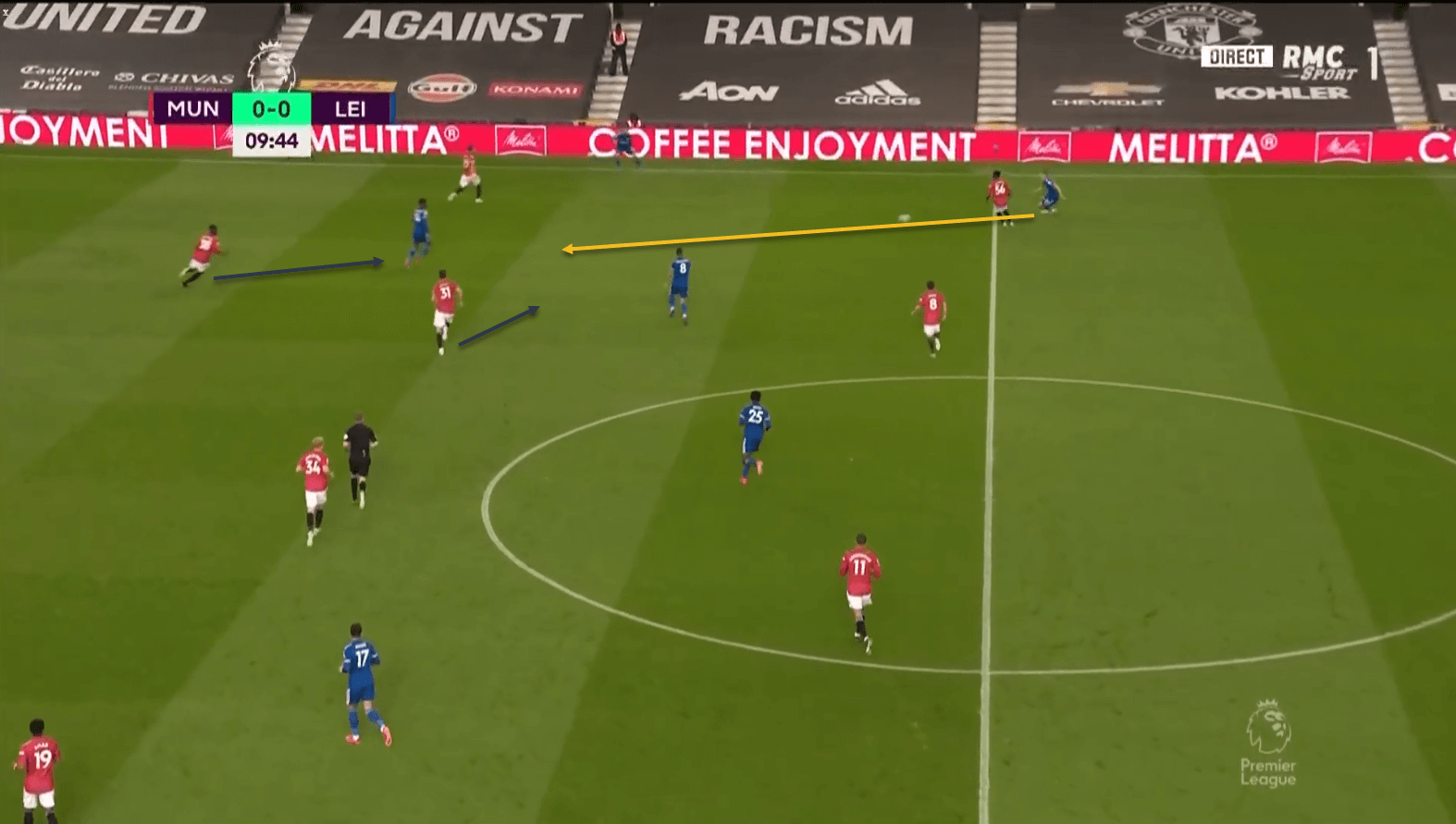 As the move develops, Iheanacho drops into midfield to receive the ball to feet, which drags Tuanzebe out towards him, while Matić is also sprinting over to try and close down Tielemans. 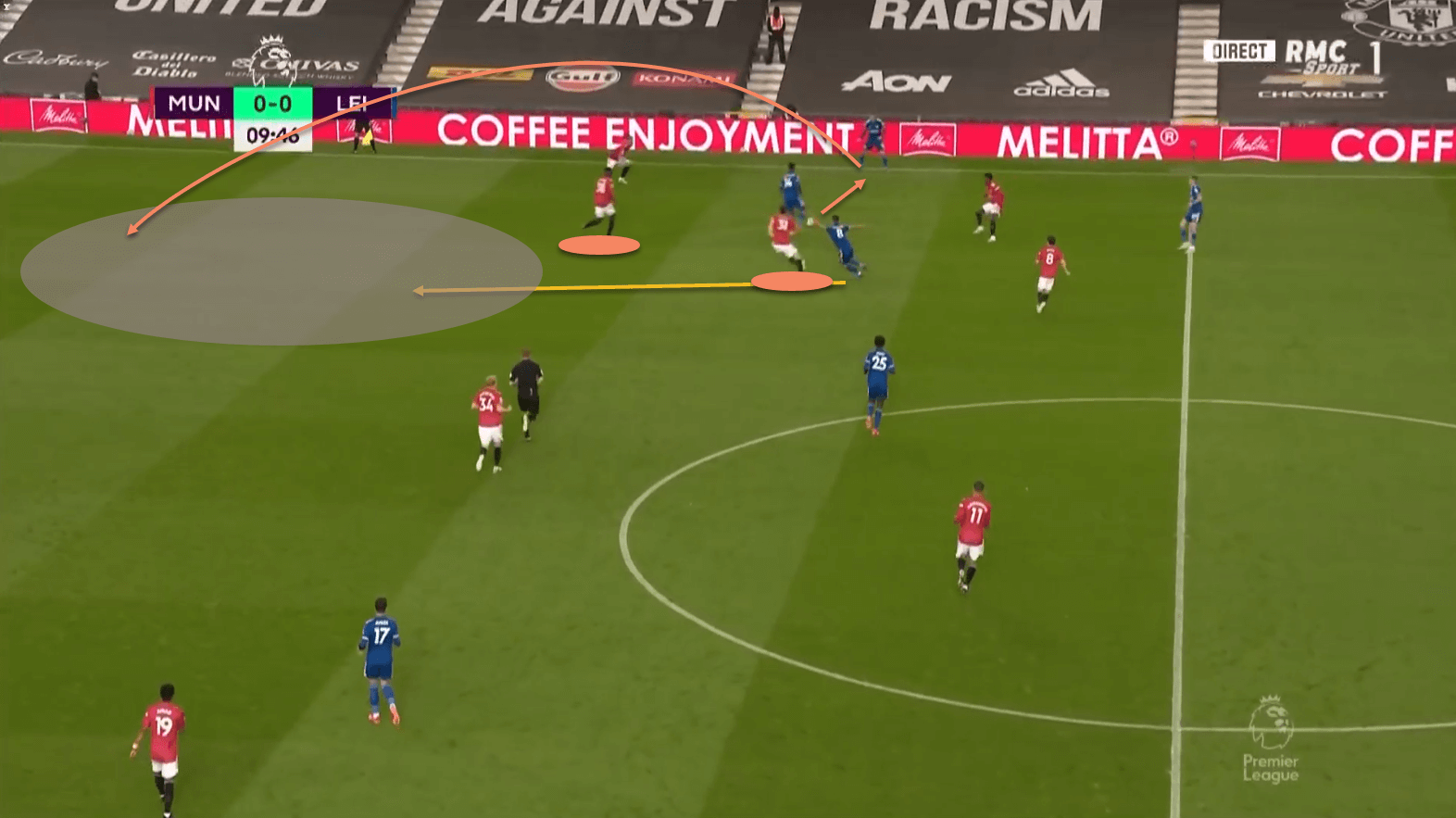 The Nigerian lays the ball off to Albrighton, who is able to play a lofted pass in behind and into space for Tielemans, who has now burst past Matić and has a lot of space to run into, since Tuanzebe is also high up the pitch. 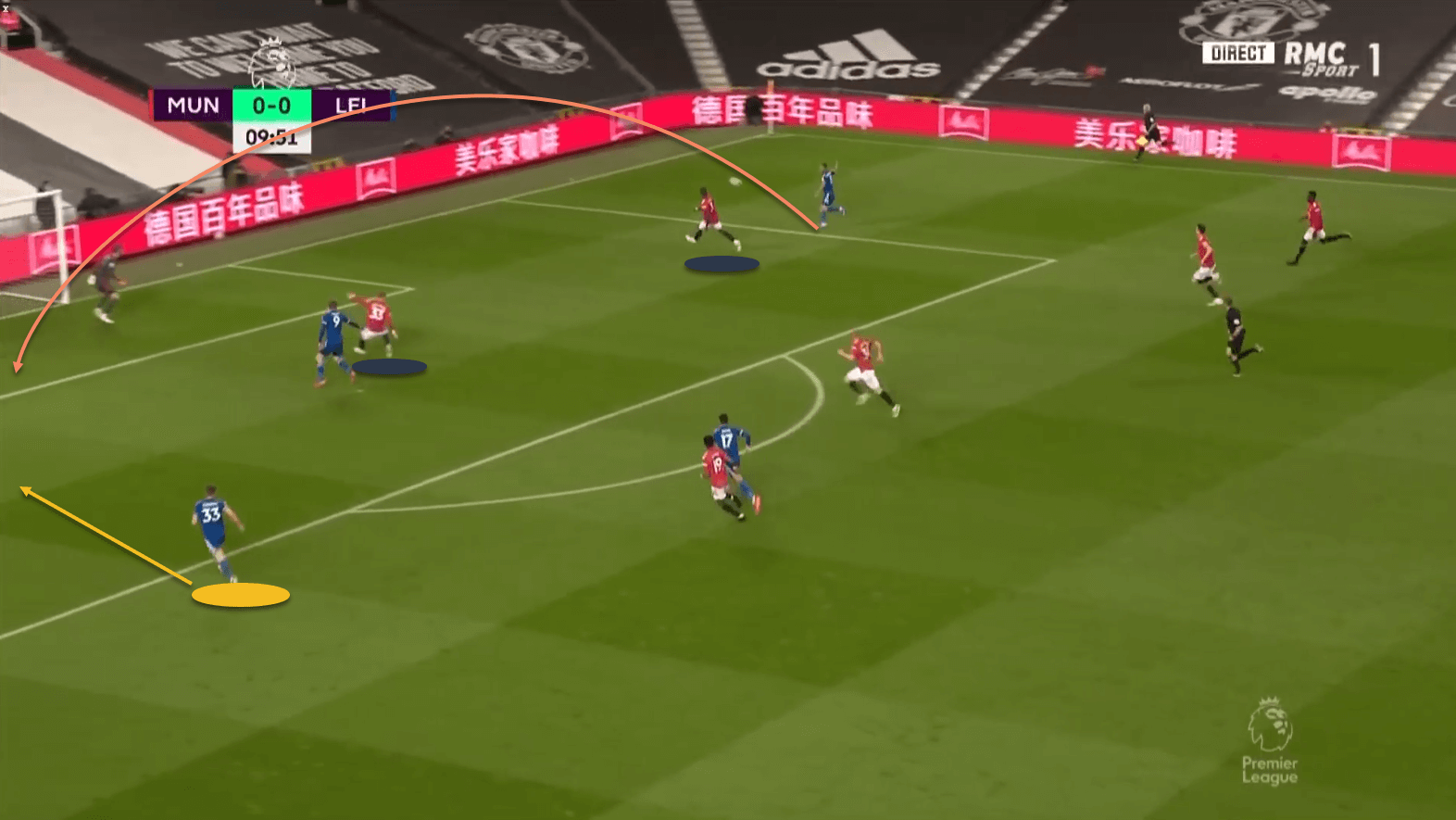 This forces Bailly and Williams to come across to cover, and leaves Thomas free at the far post to volley Tielemans’ cross into the net.

It was certainly an excellent goal, but United have conceded this sort of goal on multiple occasions, with the same issues – players getting drawn to the ball and conceding space behind them, and also forcing teammates to move across to cover which leaves opponents free at the back post. It is something that will need to be sorted out, either on the training ground, or by acquiring a different type of midfield player to those already at the club, if Solskjær has designs on mounting a serious challenge for the Premier League title next season.

Leicester’s winner came from another United weakness this season – set-pieces, as Söyüncü was left unmarked to score from a corner. While this result does not really change anything in the league for United – City were virtually champions, while United had secured their place in the top four at the weekend, it does point to some recurring issues which need to be fixed over the summer, as well as in the short-term, with a Europa League final against Villarreal on the horizon. Leicester’s push for a Champions League spot certainly received a massive boost, and they will also have gained confidence ahead of the FA Cup final. With matches against Chelsea and Tottenham finishing off their league campaign, it will not be easy for Leicester to keep hold of their top-four spot, but Rodgers’ side are definitely much better-placed to do so now.