Manchester United vs Liverpool is one of the most famous rivalries in world football, and more often than not, these ties hold extreme importance for at least one of the two sides. This time around, Liverpool needed a win to continue their push for a top-four finish in the Premier League which would grant them qualification for next season’s Champions League. Meanwhile, hosts Manchester United knew a positive result and performance would help fuel their momentum as they approach the Europa League final, with the league title now belonging to Manchester City. In a fierce contest that saw Liverpool come away with a 4-2 win after some tactical tweaks from Jurgen Klopp, Liverpool will be confident that they can complete their hunt for a top-four finish. This tactical analysis will look at how United caused trouble for the visitors, particularly in wide areas in the first half, while we will also provide an analysis of Liverpool’s pressing game throughout the tie, and how they were able to put four goals past their famous rivals. 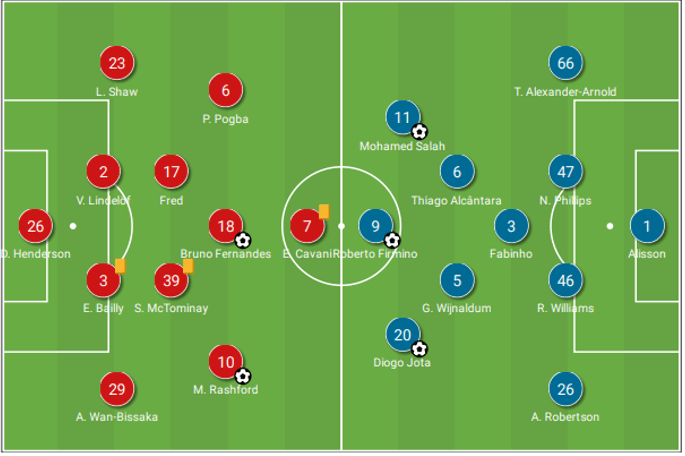 Ole Gunnar Solskjaer went with a 4-2-3-1 shape which provided them with success in the early stages of the game, particularly in midfield areas. Luke Shaw and Aaron Wan-Bissaka played important roles at full-back, with Eric Bailly and Victor Lindelof partnering in central defence in light of the absent Harry Maguire. Fred and Scott McTominay lined up in the deeper midfield roles, with Bruno Fernandes playing his usual advanced midfield role. Paul Pogba would later be introduced into the deeper midfield role which allowed United to play through Liverpool’s press with less trouble. Pogba initially started on the left of the midfield unit, with Marcus Rashford on the right; Edinson Cavani leading the line.

Jurgen Klopp went with a 4-3-3 with the ever-reliable Fabinho able to continue in his anchor man role rather than having to play as part of a back four. This time, to the surprise of many, Nat Phillips and Rhys Williams partnered up at centre-back – Andy Robertson and Trend Alexander-Arnold at full-back. In front of Fabinho was Thiago, who had arguably his best performance in a Liverpool shirt to date, with Gini Wijnaldum alongside him. Diogo Jota and Mo Salah operated as the wide attackers, with Roberto Firmino bagging a brace from centre-forward.

Liverpool’s pressing – early issues and how they were fixed

Anybody who has followed Premier League football over the last 5 years or so will know that one of the strongest element of Klopp’s Liverpool side is their work off the ball – how they set themselves up to apply pressure to opposition teams to win the ball back. While their pressing wasn’t necessarily poor in some parts against United, Solskjaer’s side were clever in playing through the press, using Liverpool’s own possession against them. As the game progressed however, Liverpool adjusted accordingly to eradicate this issue.

Liverpool’s biggest issue in the early stages was the positioning of their midfield unit when United had possession in the same third. As expected, Liverpool almost always had at least one of their front three pressing – they also had the midfield three not far behind to provide support in some capacity. However, the issue arises when their back four aren’t taking a high line, leaving a sizeable gap between the two units. With a player like Bruno Fernandes in the ranks, United were able to utilise both central and wide areas to work the ball into the Portuguese in these dangerous areas, where he would then have the chance to drive an attack at an isolated Liverpool defence.

Another well-known element of Liverpool’s game is their ability to hit teams on the break, shortly after winning possession back. To aid this, they often leave their wingers – Salah and Jota in this tie, high up the pitch, providing little defensive support. United realised this and were able to send their full-backs into attacking phases to create numerous situations of 2-on-1’s against Liverpool’s full-backs. Alexander-Arnold in the example above is the one isolated, with both Shaw and Pogba occupying the same flank, giving them the chance to perform a simple combination to progress closer to the box. We also saw examples of this on the right flank where Wan-Bissaka would combine with Rashford to create issues for Robertson. The end idea for United in scenarios like this would be to provide service to Cavani, or bring him into play in the attacking third.

As we mentioned, Liverpool reacted to their issues in midfield, and it made things very difficult for United when going forward, especially when they tried utilising the flanks to do so. How did they fix their earlier issue in this region? Firstly, the defensive responsibilities of Thiago and Wijnaldum were increased to support Fabinho and the full-backs. Secondly, and more importantly, the back four took a higher line, therefore decreasing the gap between the two units, giving United much less chance of playing through the lines. It also left United isolated in attacking options on many occasions – the example above saw the ball being played into Pogba, with immediate pressure from all four Liverpool players being applied to halt the Frenchman.

We saw Liverpool struggle to get real control over the game in the first half, but they rectified this when they extended their lead to 3-1 early in the second half. This allowed the Reds to commit more men forward to cause more issues for United’s back four. This then caused United to call for defensive reinforcements in central areas, giving Liverpool’s full-backs more of a license to get involved in attacks.

We see exactly this in the image above. Robertson is in possession on the left flank, with an abundance of passing options in central areas. As we will see later in this tactical analysis, Firmino looked to drift out from the traditional number 9 position to provide support which enabled link-up play from midfield into attack. The space in wide areas was able to be utilised by Robertson and Alexander-Arnold via passing combinations and one-two’s, with United struggling to cut these areas off without leaving space in the middle which could be exploited. We also saw Liverpool send Wijnaldum forward in attacks to increase their attacking presence, with Thiago providing that deeper midfield support.

As touched upon, Roberto Firmino likes to drop in deeper to offer himself as an option to link up the play. He was successful in drifting away from markers to find pockets of space to lend his assistance, which allowed Jota and Salah to come in narrow to create a front two. With the two wingers coming in to play in a more central area, space would again be opened up for Alexander-Arnold and Robertson to make themselves a danger in those wide areas.

The debate about whether Manchester United have a clear attacking identity will wage on for some time, but there are some areas of their attacking game that are incredibly difficult to stop. They are also good at identifying opposition weaknesses and acting on them to create opportunities for themselves, as we can see below.

Whether they were creating those 2-on-1 scenarios on the flanks or not, we often saw them send the full-backs into positions where they could closely combine with the wide midfielders. To make things trickier for Liverpool’s back-line, Rashford (or another attacking player in United’s ranks) would alternate in his support methods – from making darting runs into spaces in-behind, to dropping in a little deeper to create space for a teammate to get into. Another interesting element of many of United’s attacks was that Bruno Fernandes could pose a danger at any given time, as we would see him look to quietly drift into pockets of space, ready to contribute should the ball find him.

This two-part analysis of Manchester United’s second goal shows how they were able to exploit Liverpool’s lack of ability to recover and defend in midfield positions. This example shows how Phillips was forced to leave his post at centre-back to try and shut down Fernandes after his own midfield had been bypassed. This was the catalyst in United picking Liverpool apart as they struggled to recover through several chances. After Shaw’s pass into Fernandes, the enigmatic midfielder executed an impressive first time flicked pass into the run of Marcus Rashford behind him, who was able to use his pace to drive the attack forward.

Later in the same attack, we can see how much Liverpool were scrambling to stop this attack, despite the poor positioning and organisation. With Fabinho beaten in this example, he was powerless to provide that much-needed cover to his young centre-back duo, and the experienced Cavani was able to keep his composure and pick the perfect moment to send a through ball into Rashford, who controlled well and finished even better.

It would appear that Liverpool are finding their form at the right time after a series of wins in recent weeks to close the gap on the top four. They still aren’t performing to the levels they were in the 2019/20 campaign, but they have certainly improved in recent months. Having Roberto Firmino undertaking a role with more purpose that allows him to link up the play, something Liverpool struggle to find in other players in their attacking ranks. Having Fabinho back in his natural role makes the world of difference for Liverpool, his ability to read the game and stop opposition attacks is priceless, and will be pivotal if Liverpool are to qualify for next season’s Champions League. Manchester United showed glimpses of why they have been present in the top four for as long as they have, with their ability to take advantage of their opponent’s weaknesses while utilising the experience and quality of players like Cavani and Fernandes.