The Coupe de France final was played on Wednesday night which the third and second place of Ligue 1 played each other. The teams were separated by a two-point margin on the league table, Paris Saint-Germain were not a great superior to Monaco. The game was tight and dangerous opportunities were limited, but Mauricio Pochettino’s men ended up having the second title of the season.

This tactical analysis will show the dynamic tactics of both managers and how they tried to adapt to the game.

Monaco were playing in a 4-1-4-1 with Kevin Volland starting as the left-winger. The midfield was formed by Aurélien Tchouaméni, Youssouf Fofana, and Aleksandr Golovin as Cesc Fàbregas only came on as a substitute. Despite scoring an own goal in the previous league game, Axel Disasi started this game ahead of Benoît Badiashile as the centre-back partner of Guillermo Maripán.

PSG came with a 4-3-3 with Danilo Pereira, Leandro Paredes and Idrissa Gueye at the midfield. Without Neymar in this game, Mauro Icardi played as the striker while having Kylian Mbappé and Ángel Di María at flanks as usual. Thilo Kehrer also got his chance to play with Marquinhos at the centre of the defence.

Despite scoring two goals, PSG’s offensive performance was hugely below par in this game. They only had 1.02 xG from seven shots, and they struggled to create chances larger than 0.2 xG apart from the two goals. At the middle stage of the game, there was even a 30-minute period in which Pochettino’s side failed to register any shots. 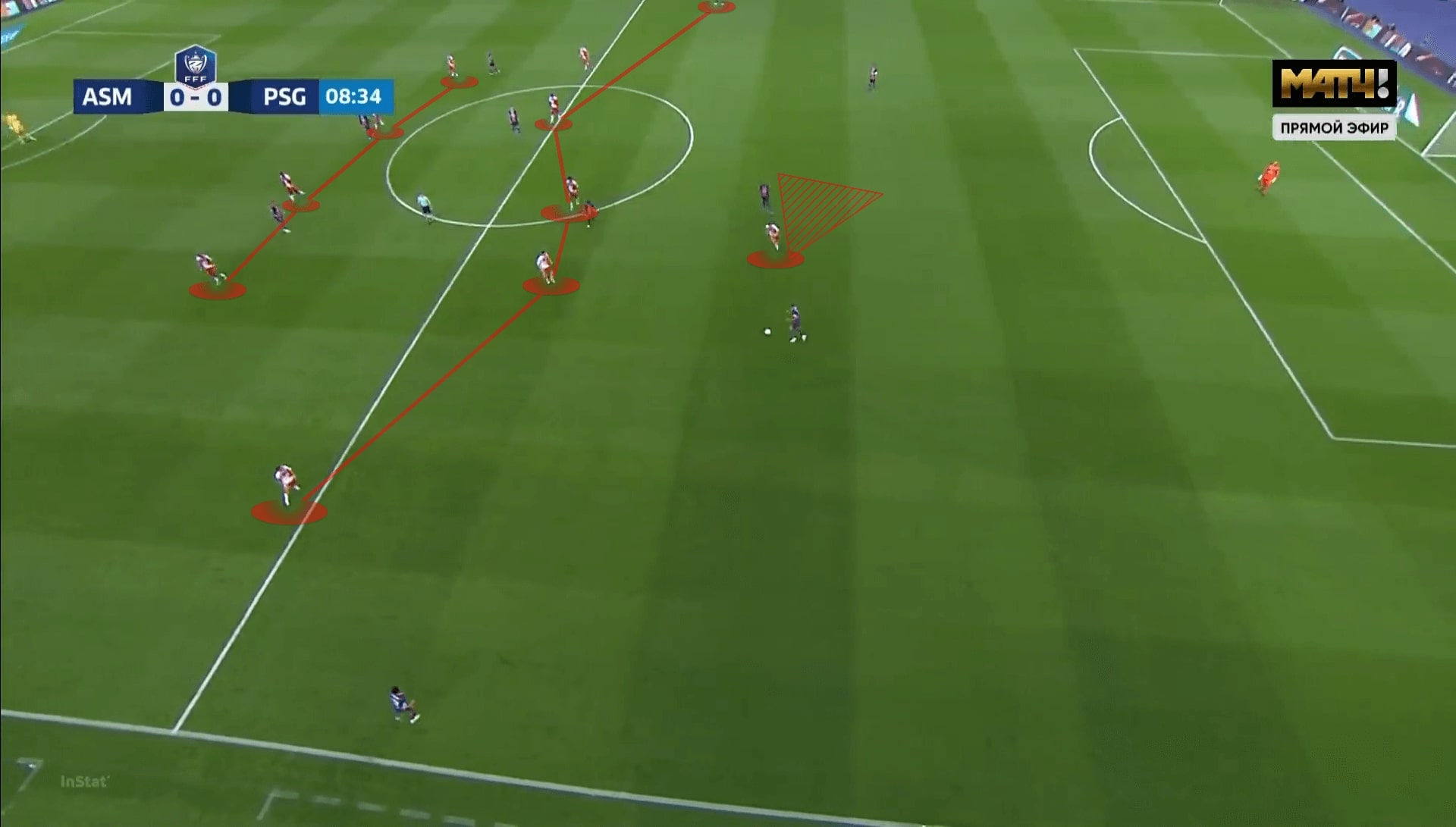 To begin with, we looked into the defensive system of Monaco and how it prevented the opponents from creating the chances. Their 13.19 PPDA was higher than the season average of 10.63, Niko Kovač did not want his team being exposed too much to the speedy attackers. Hence, the team were more disciplined and would wait for each other to press as a unit.

The firs first image shows a 4-5-1 midblock of Monaco that guarded the central third when they were not pressing. The backline was incredible compact and should be credited for limited the threat of the PSG front three. The shape at the midfield could be changed and adapted according to the opponents’ behaviours; In general, the striker would have to cover the passing lanes between centre-backs. This has shown how Kovač tried not to let PSG dominate the game and moving the ball easily. 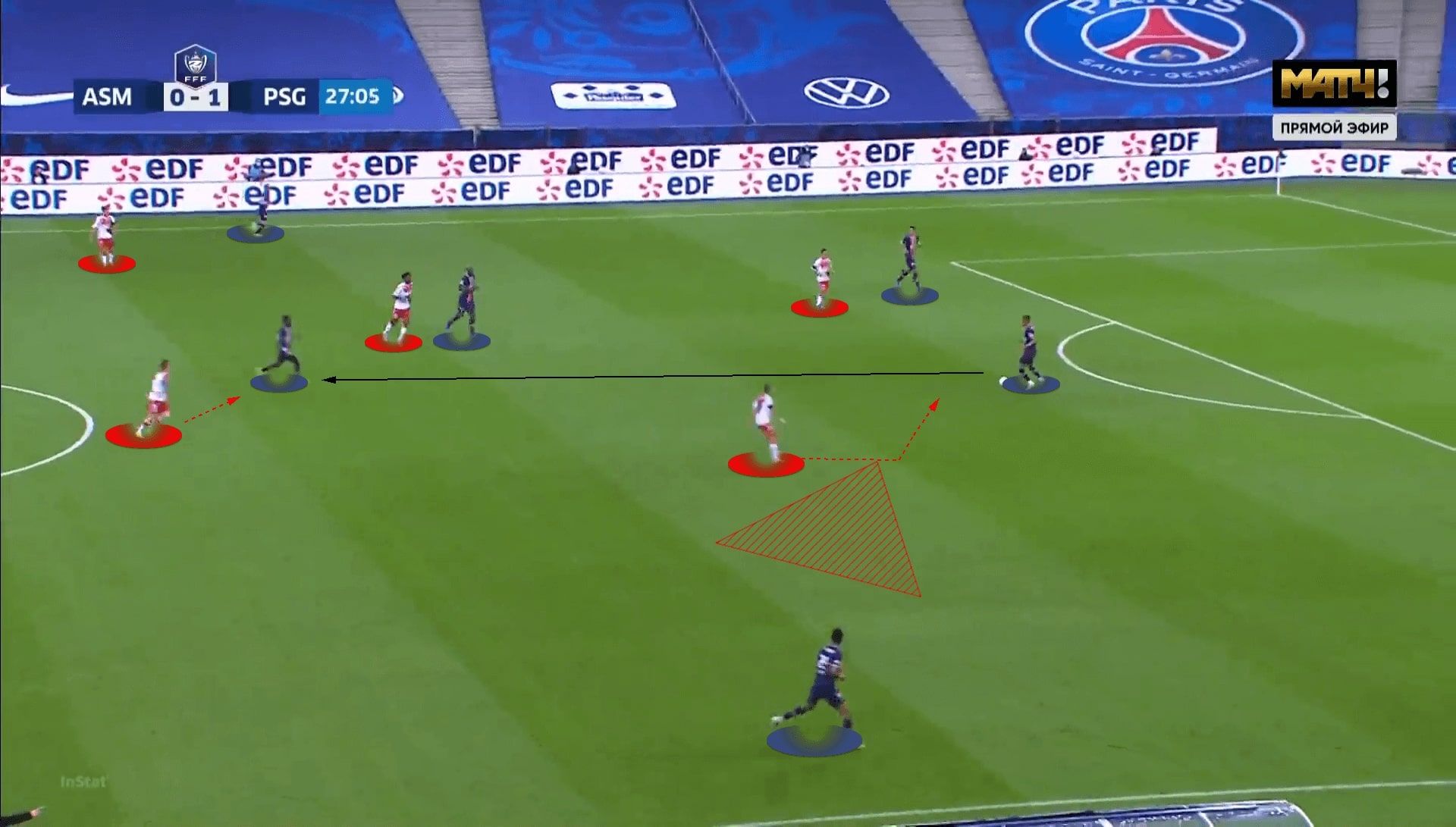 When Monaco pressed, they were clever by committing at least 5-6 players in the opposition half. The wingers should be concerning the full-backs while pressing as the full-backs were deep to defend the wingers, the image shows Ruben Aguilar would need to slightly curve his run to invite Kehrer passing into the centre.

While pressing both centre-backs of PSG, Monaco also did well to pressure the midfielders by their midfielders. They were disciplined to follow the dropping players and giving pressure whenever a PSG player received at the centre, you could see both PSG midfielders at the centre had the markers around in the image. 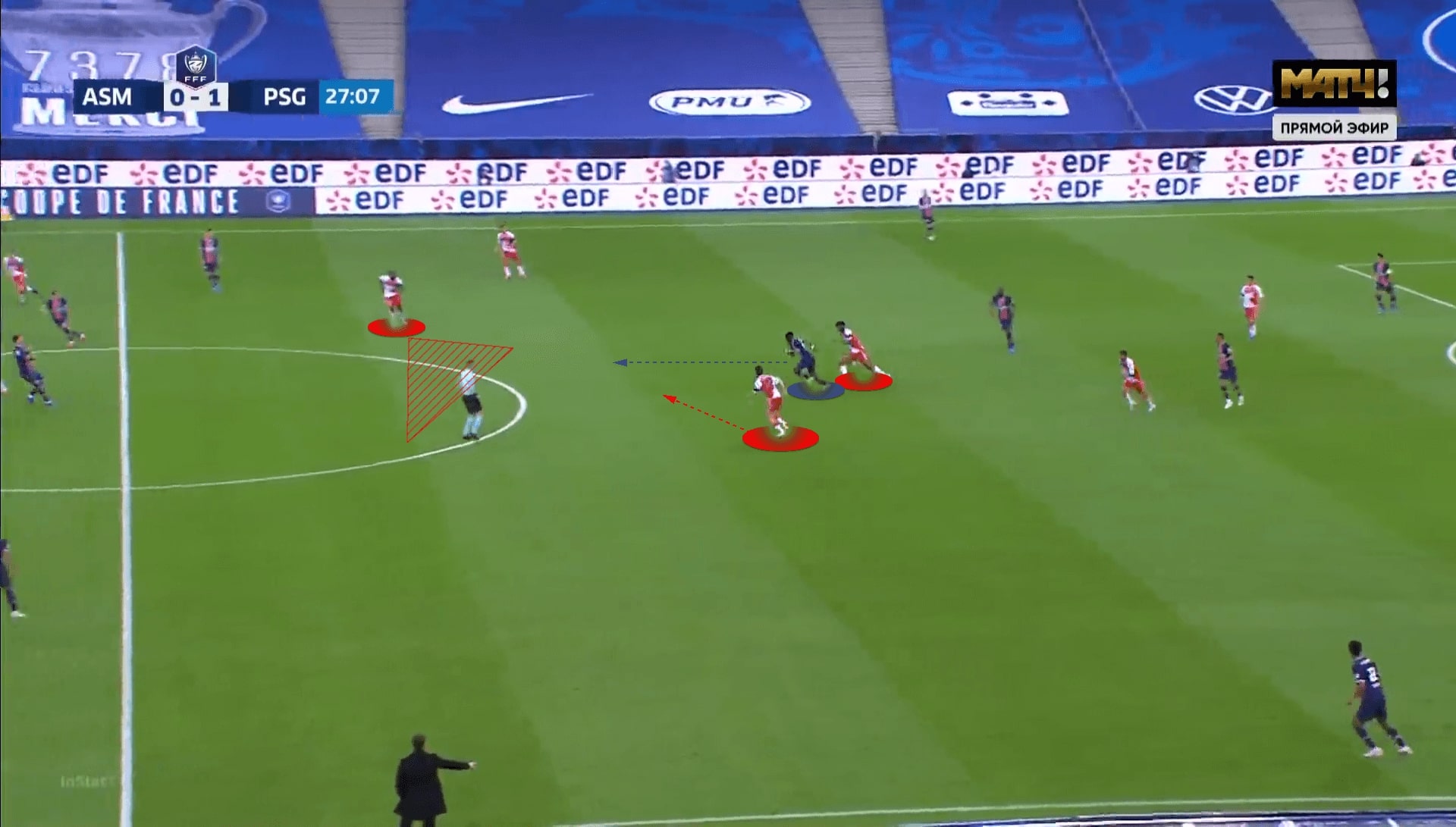 So, when Gueye received, turned, and brought the ball forward, he was into the trap of Monaco as Kovač’s teams had players waiting for his arrival. Fofana was coming from the left to press him, while there was other two Monaco players running with Gueye all the way.

That means the PSG midfielder was facing the pressures from three angles, and he could not release the ball to the front players, losing possession at the critical area of the pitch. PSG had some nice transitions moments because of the press. 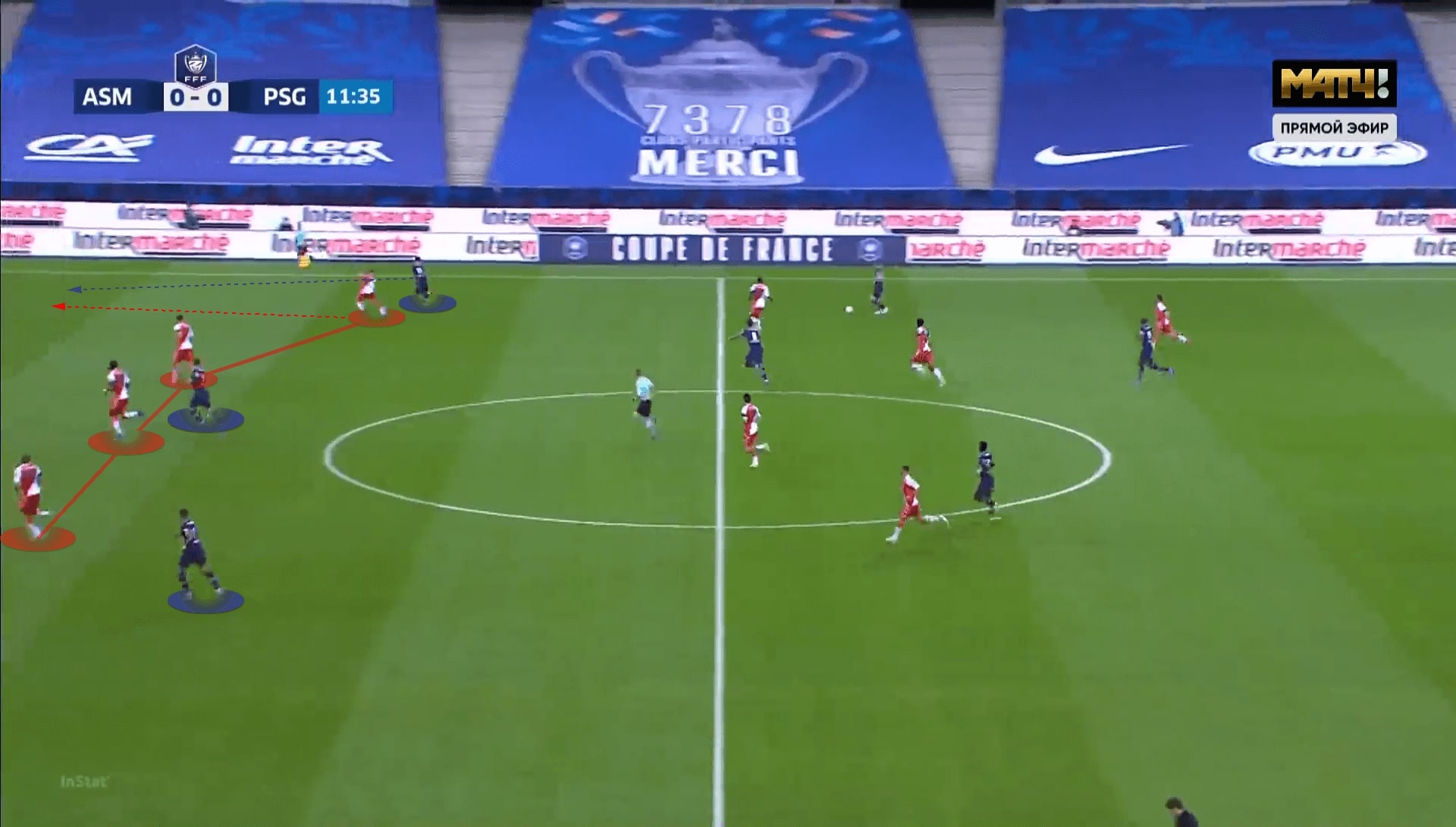 On occasions, PSG did break the press by individual qualities or the wide full-backs. However, as explained in the above analysis, Monaco kept the back four compact to eliminate the threat of the attacking three. With these tactics, Monaco were able to recover the ball a lot when PSG tried to find the wingers.

The above image shows PSG’s had a chance to play a through ball to release the wingers, but Monaco did not let Mbappé and Di María receive freely in this game, the full-backs were tight on the wingers all the time. In this image, Di María tried to receive behind the defence but Henrique did not outpace by the Argentine international. Also, the tight distancing between each defender also kept the passing channels narrow, so the PSG front three could not run into the gaps.

The image also shows the numerical superiority of Monaco’s backline of the PSG front three. When the defenders were staying together, they could have a 4v3 advantage and having better possibilities to double-press if needed. 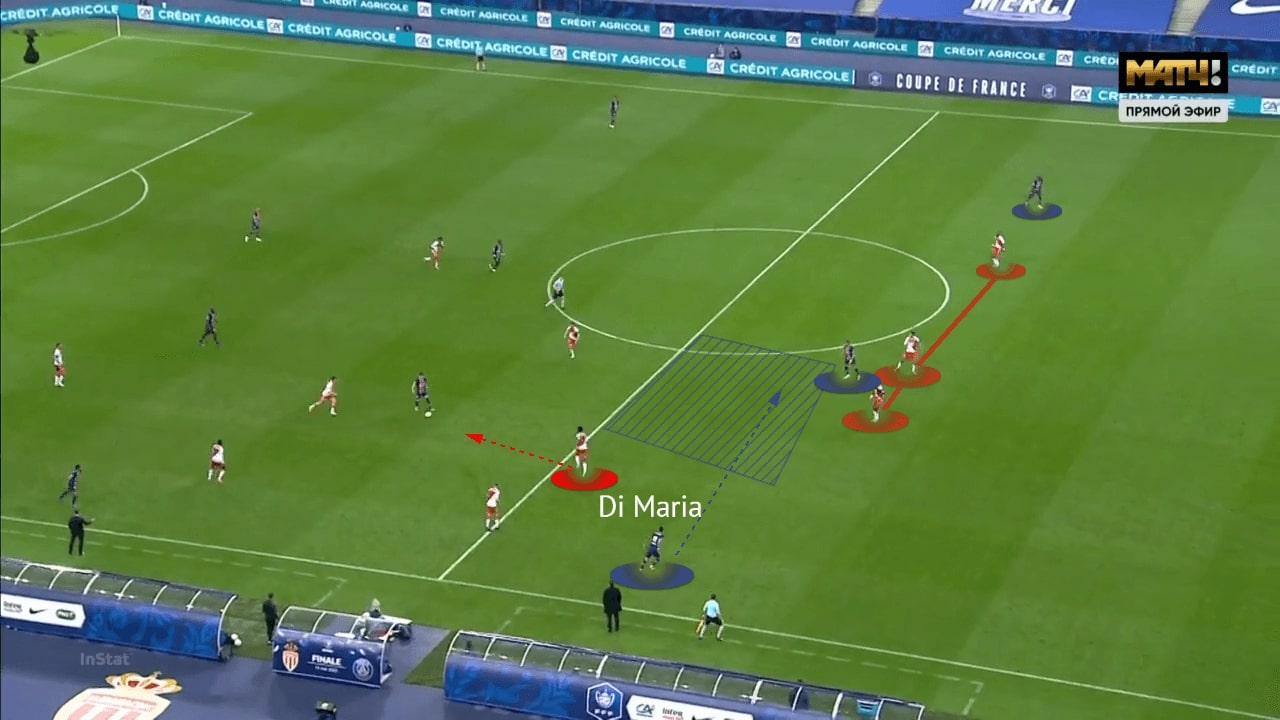 Intriguingly, the disorganized defence was the reason how Monaco were totally out of the game at the 81st minute. Since Kovač’s team needed to score, they were more aggressive and pushing more players high as the game continued. However, PSG seized the moment to exploit the incomplete backline to score the second goal.

The image shows the scene before the goal. Henrique was out of position after joining the press, so Monaco only had three at the back. When PSG bypassed the side trap and reached the midfielder, Tchouaméni went out to press but being late to arrive, the passing angle was still opened. Monaco lost track of Di María and let him receive at the half-spaces, then Badiashile lost the 1v1 duel and conceded the chance for Mbappé to bury the game. 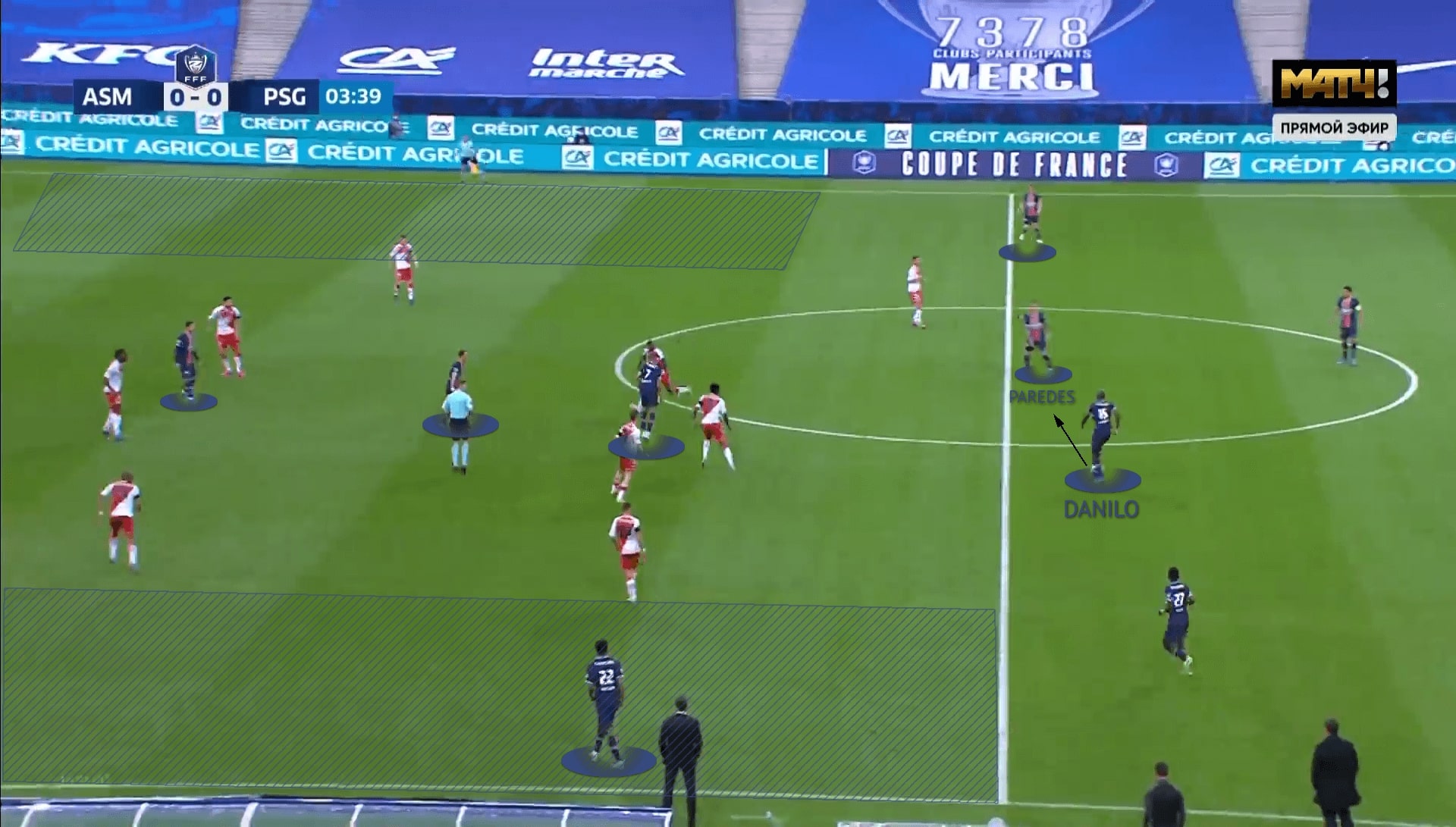 The PSG’s attack was very similar to the Manchester City games. They deployed a pair of wide full-backs to stretch the pitch and hold the width, then keeping the wingers close to Icardi for short combinations. In the first two phases, they needed the wide midfielder – Paredes dropping into deeper positions to receive as Pereira was not good on the ball. This was shown in the above image.

Also, the wide spaces were opened when wingers went inside as indicated in blue. However, PSG did not utilize these spaces well because of missing quality first passes in the build-up. 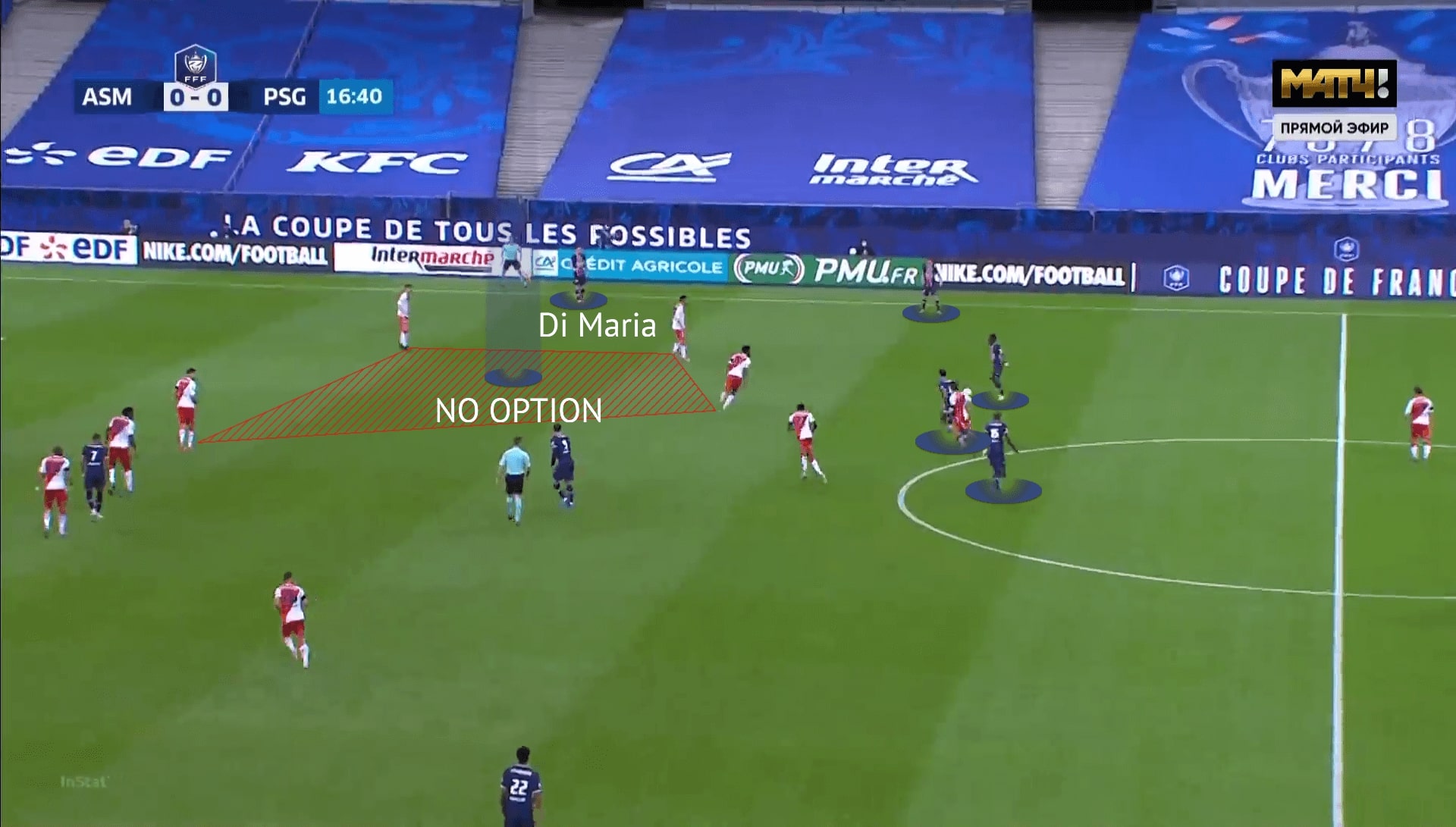 From PSG’s perspectives, there was something that needed to be changed if Pochettino wanted to play these midfielders together. The functions of Gueye and Pereira were too similar, and all of their midfielders preferred to receive at the outside of the defensive block. This would lead to congestion in the first two phases and the occupation of spaces was suboptimal.

When all PSG midfielder dropped deep, they would not have any occupation of spaces between the lines when Di María stayed wide. The above image shows how PSG struggled to move the ball into the half-spaces without a player supporting in that area. As a result, their attacks were forced wide too often.

Kovač changes could not save

Although Monaco defended quite well, their offensive performance had let them down. In the early stages, they did not have the chance to attack too much but quickly dominated possession after Icardi’s goal. However, they were not good enough in the final third to create opportunities. 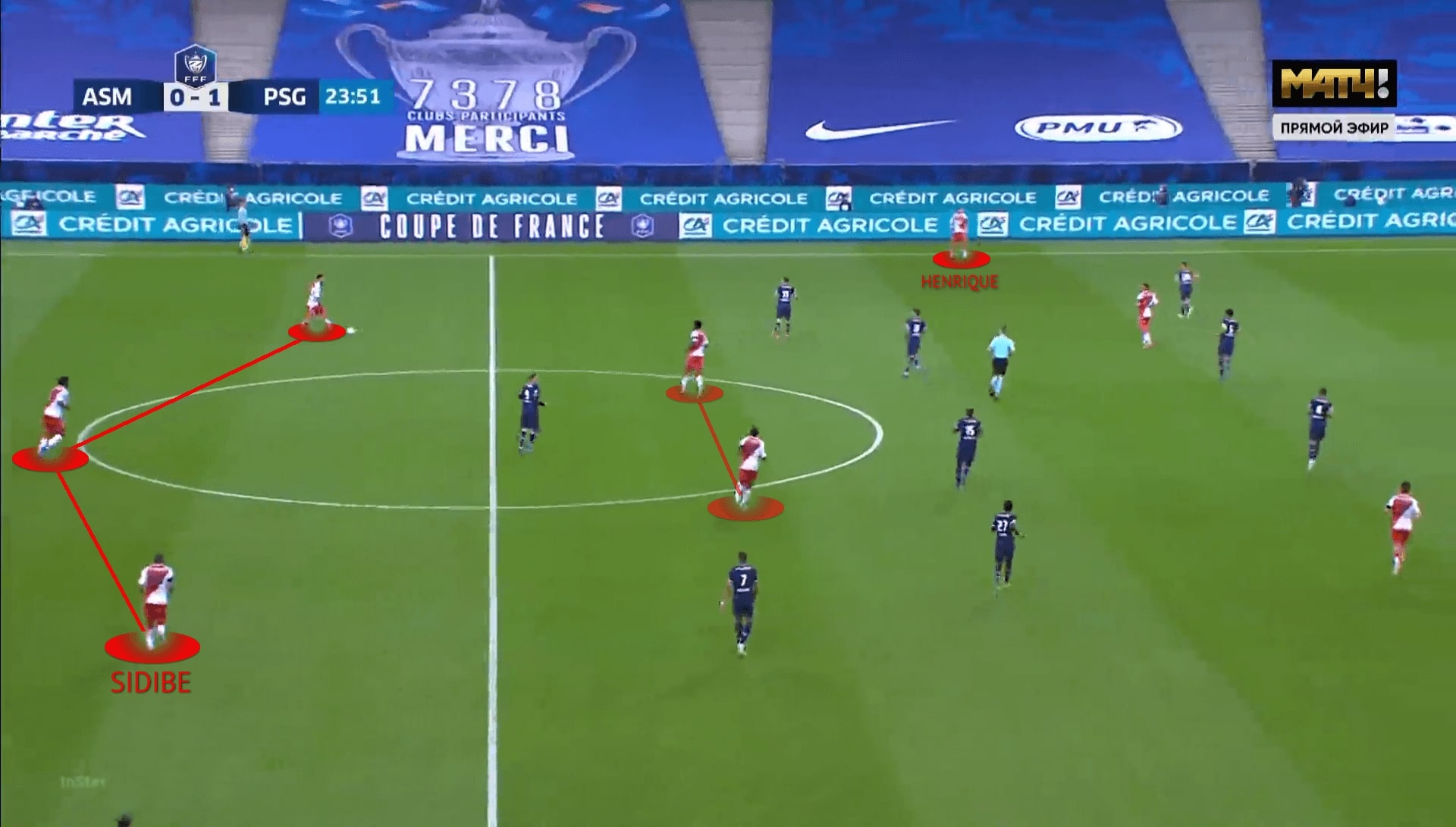 Kovač’s side came with a 3-2-5 shape when attacking with a pair of asymmetrical full-back. Henrique would go high as a left-winger to attack flank while Djibril Sidibé tucked inside to form a back three with the central defenders. In front of the first layer, they had Fofana and Tchouaméni deep to operate behind the lines, mainly as a part of the rest defence to stop the counter instead of receiving the ball to attack.

The above image shows the structure of the team. With centre-backs comfortable on the ball liked Disasi and Maripán, Kovač gave the freedom to bring the ball out of the first line. The functions of the midfielders were to absorb pressure at the centre, so Monaco could attack from the wide spaces by using Henrique and Aguilar.

However, the attack was not effective enough to create the chances because of the slow tempo of play. Monaco failed to create enough dynamics by player movements or individual quality at flanks, so they were usually trapped and struggled to get out when the ball was on the wide players. 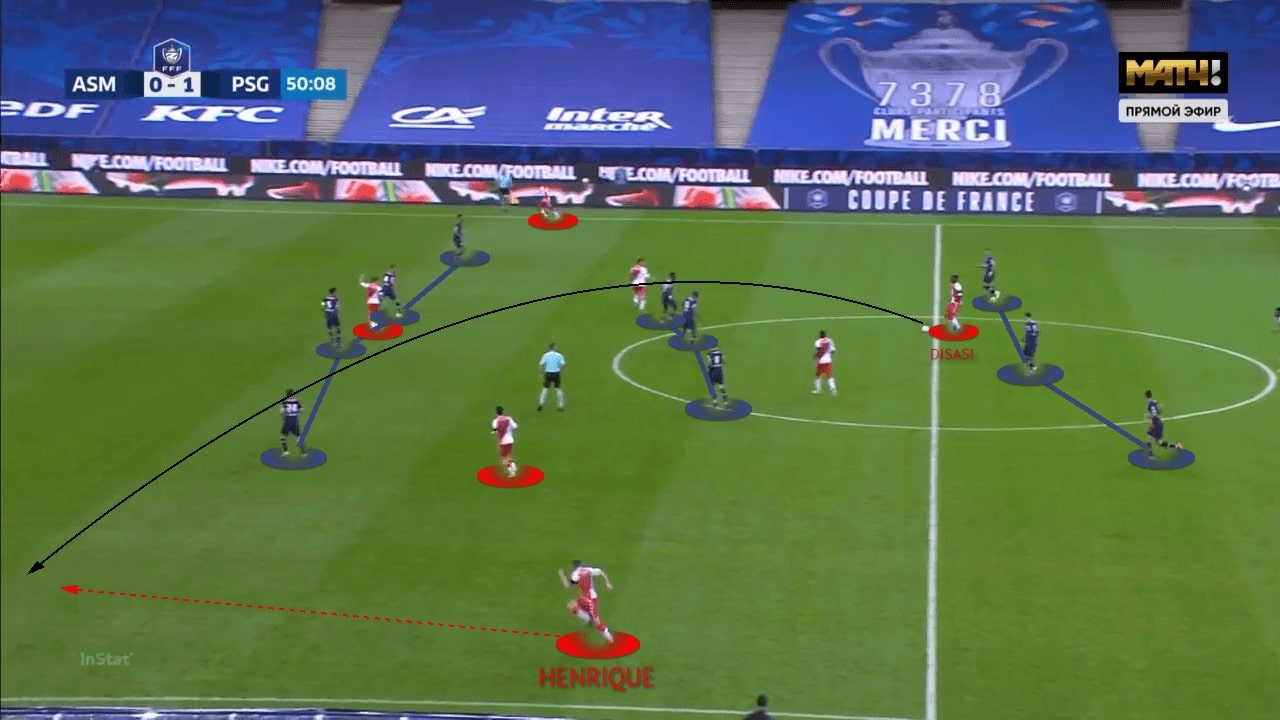 Kovač made a minor tweak at halftime without changing the 3-2-5 shape. The change was the way to attack flank on the left – Henrique was more often running into spaces instead of staying high in advance. So, spaces on his side would be left open until he arrived and he could try getting to the byline.

The image shows Disasi easily got past the PSG first line by carrying the ball, with Volland inverting to the half-spaces, the PSG right-back was forced to track him and stayed inside narrowly. As a result, the wide spaces were opened for Henrique to run into and this was how Monaco attacked in the second half. 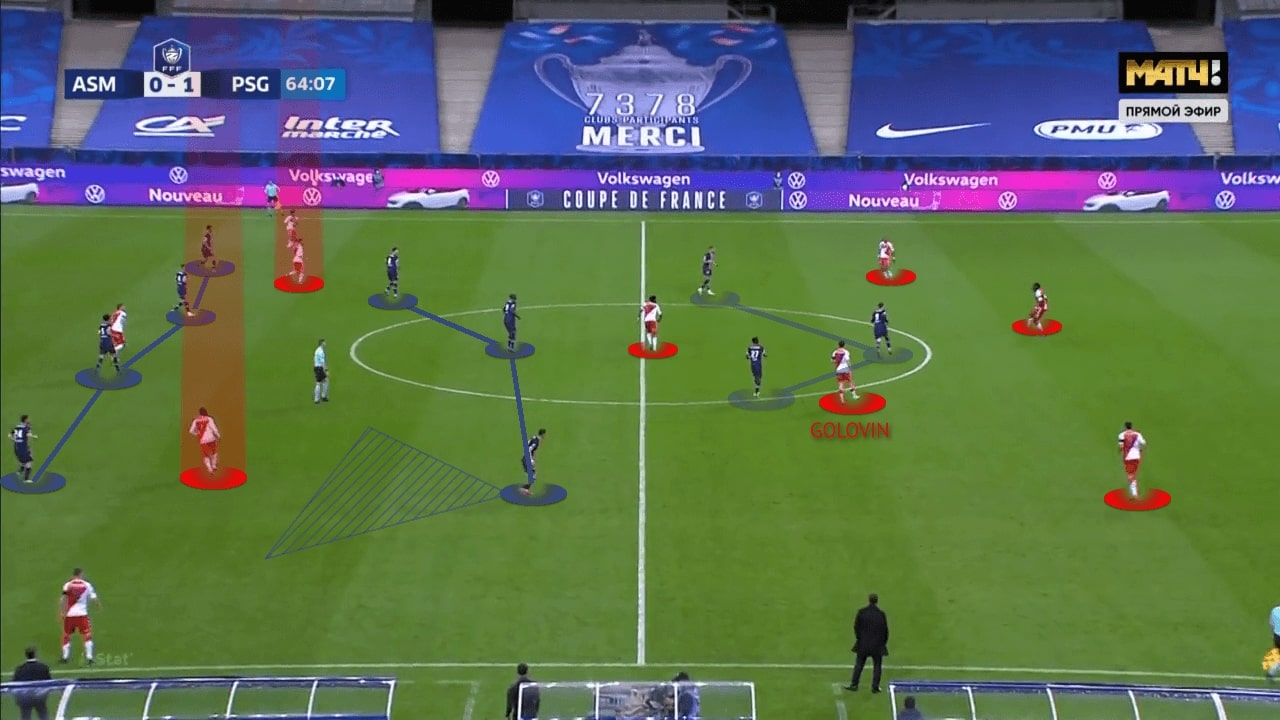 When Kovač tried to boost the attack, he did not change the 3-2-5 structure of the team but merely trying different personnel. The above image shows the shape of Monaco after the Fofana came off, Golovin was moved deeper to play with Tchouaméni. The head coach was trying to put a better passer in the first phase to increase the quality of the build-up, but the attack was still ineffective.

Monaco were unable to reach the players at half-spaces as specified in the image. It was because the midfield involvement in the build-up was low, the centre-backs did not pass to the midfielders and they were trying to break two lines with one pass. As you see, PSG had disciplined midfielders to cover the half-spaces, so it would be difficult to penetrate into the centre.

At the closing stages, PSG showed how much they desired for the title. To defend the lead, the players were disciplined to stick in a compact unit. Their talented attacker – Di María would defend on the wide right liked a right wing-back to counter Henrique’s threat. Therefore, at the closing stages of the game, Monaco’s wide left-back could not impact the game as he did before.

PSG were quite disappointing in Ligue 1 and the UEFA Champions League this season. Although they still had a chance to win the league, the title was not in their own hands. Recently, Pochettino’s team faced so many issues offensively and defensively, which would not vanish without the right solution from the coaching staff. Anyway, it was still a vital victory to the team since they’ve lost Coupe de France to Rennes in 2019, the trophy was never granted and it was down to the hard work for everyone in the club.

Monaco had a bright season despite the squad has changed a lot in recent years. Even they conceded two and lost the game, there were signs of positives that Kovač would be happy to take away. This should only be the beginning of the team and we should see a better Monaco in the coming years.