Mumbai City FC and FC Goa have now shared more than just the West Coast in the Indian Super League. Former FC Goa coach Sergio Lobera has taken charge of Mumbai City and brought along a bunch of players with him. The two clubs can be proclaimed as the footballing giants of India, as Mumbai City have their affiliation with the City Football Group and FC Goa recently linked up with RB Leipzig, other than having their financial prowess and incredible squads. These two captivating sides locked horns at Jawaharlal Nehru Stadium on Wednesday.

In this tactical analysis, we will look at the tactics and strategies of both the teams. The following analysis will examine the match events and hence correlate to the final result. 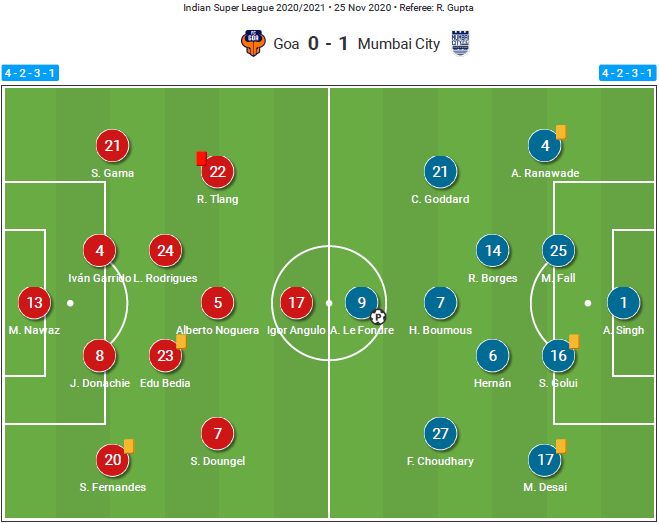 Juan Ferrando started in his preferred 4-2-3-1 and made three changes from his 2-2 draw against Bengaluru FC. The 20-year-old Mohammad Nawaz started in goal for the third year running. Seriton Fernandes, James Donachie, Ivan González and Saviour Gama formed the back four. Lenny Rodrigues and Edu Bedia played as double pivots with Alberto Noguera playing in the No.10 position. Redeem Tlang and Seimeinken Doungel played on the wings with Igor Angulo leading the line.

Mumbai City too lined up in a 4-2-3-1 and Lobera made four changes after the 1-0 loss against NorthEast United. Amrinder Singh took charge of the goal while Amey Ranawade, Mourada Fall, Sarthak Golui and Mandar Rao Desai were assigned defensive duties. Rowllin Borges and former La Liga player Hernan Santana were the centre-midfielders with Cy Goddard and Farukh Choudhary playing as wingers. Adam Le Fondre started upfront with Hugo Boumous playing behind him. 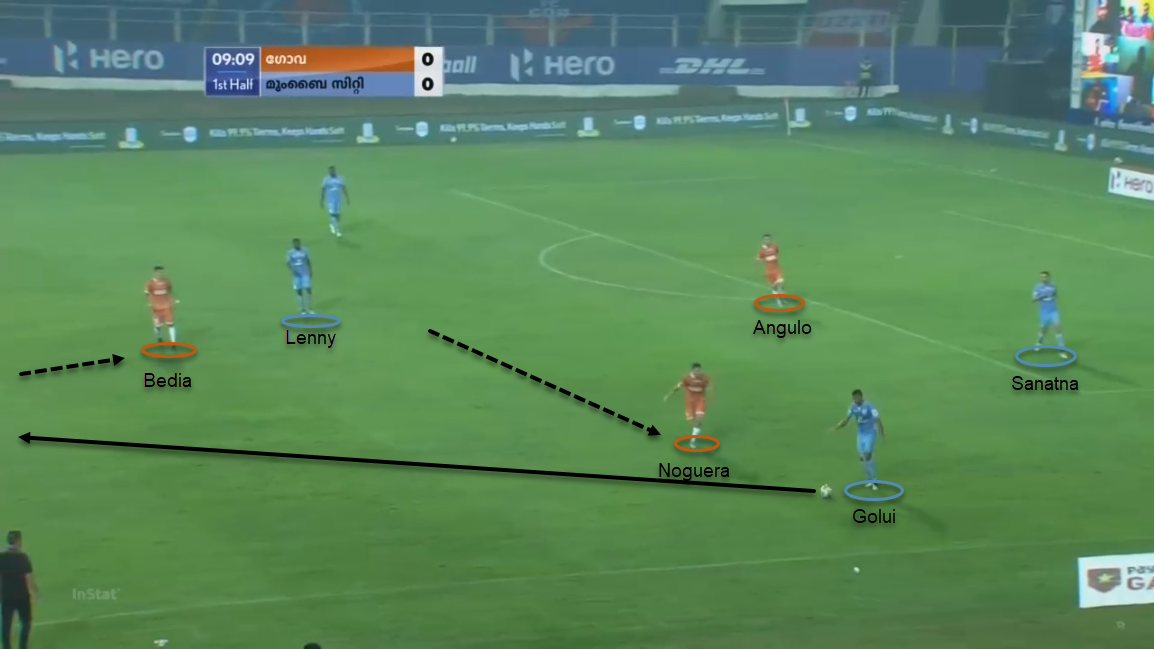 Lobera’s side is known to play it out from the back and build their attack from the left since his days at Goa. Amrinder would tend to play a short pass to Golui and in the at the same time, Mandar would stretch vertically to increase the gap between him and Golui. With Santana dropping between the pair of centre-backs, Doungel was in a dilemma whether to press the left centre-back Golui or to drop back deep with Mandar. Noguera then decided to step away from the pivot and press from the inside. In the meantime, Bedia would step ahead from the midfield and provide lateral cover for Noguera. 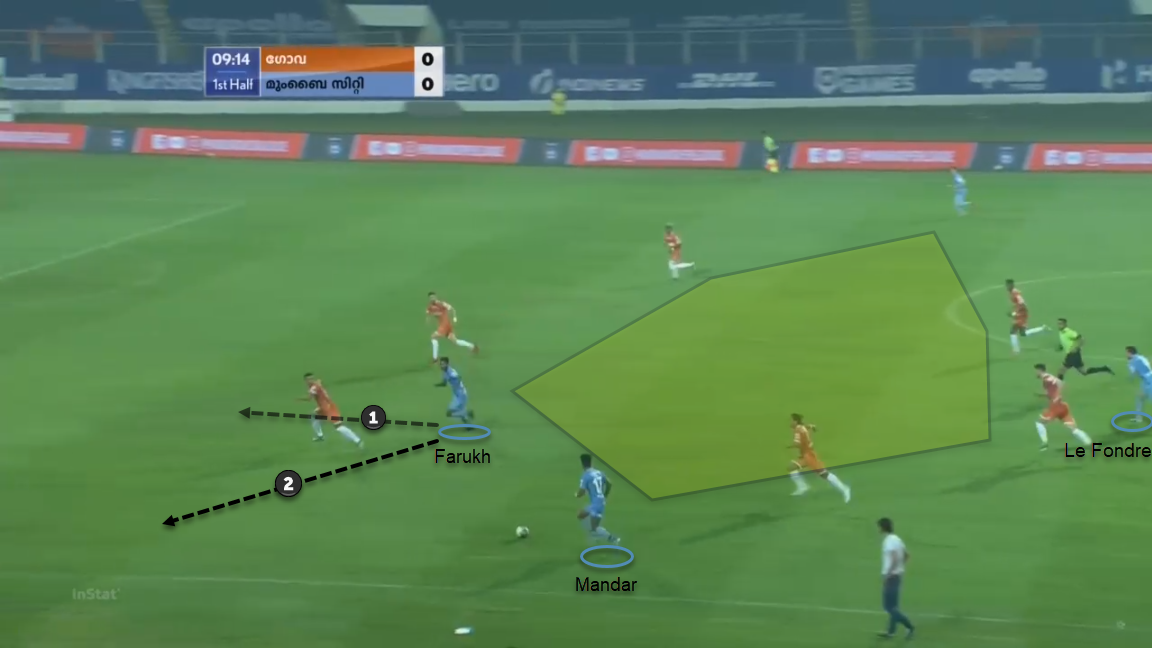 Mumbai would also shift more players on the left with either Boumous tilting his position or Le Fondre running out wide. The game was too focused on the left. Despite the successful attempts of progressing the ball in the opposition half, Mumbai didn’t achieve much from it. The use of forward in the build-up and excessive use of left flank didn’t leave many passing outlets in the centre. Therefore, even though the team had the ball in a promising position, there was no one to attack it.

In the above example, Farukh had the opportunity to make a run between the centre-backs and demand a through pass which could have led to something substantial. But he decided to support vertically by making a diagonal run. They had zero shots on target in the first half. Last year’s kingpin of the league, Boumous had a poor first half as he  lost possession on six occasions. 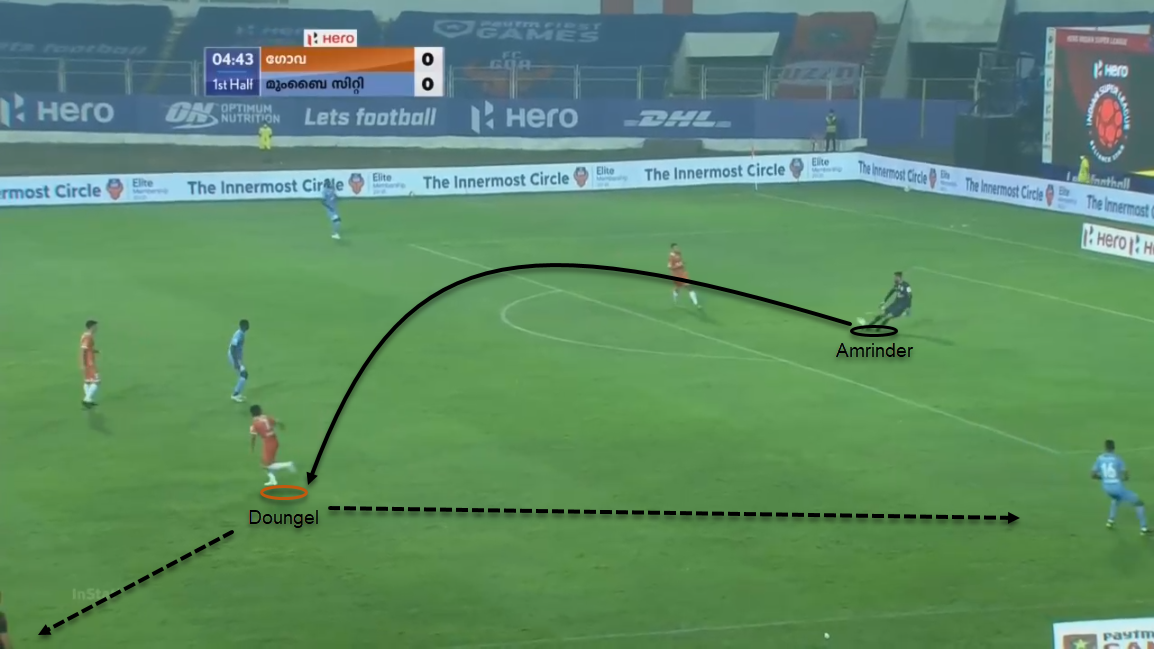 After a few initial blunders, Goa figured the pattern to break the system. As Amrinder had the cue to play the ball to his full-back Mandar every time Doundel pressed Golui, Doundel positioned himself smartly between the two ensuring safe distance to recover. He then saw Amrinder’s movement and read the pass precisely. Goa won the ball a couple of times but couldn’t create much out of it. 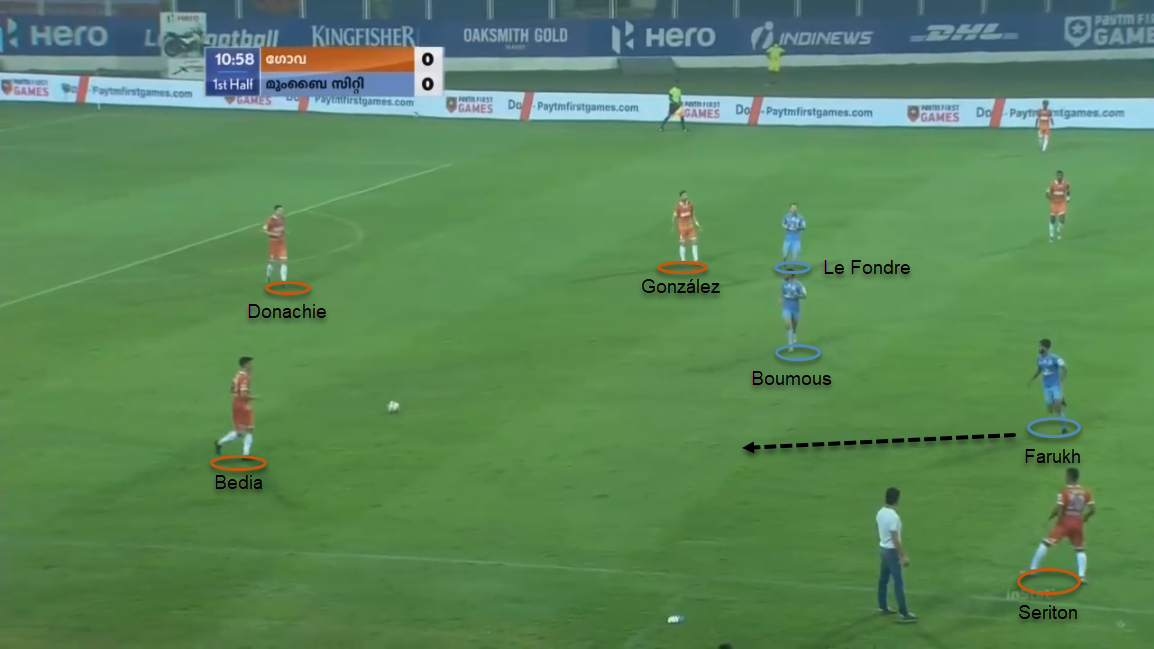 The Gaurs had one of their centre-midfielders either drop between the two centre-backs or on the sides to form the back three. Mumbai City followed a zonal press in a narrow 4-4-2. They had Goa mostly into their own half and applied pressure every time the goalkeeper Nawaz got the ball. The front six were active but the back four didn’t take part in the press. They preferred staying compact and maintained their distance for caution. 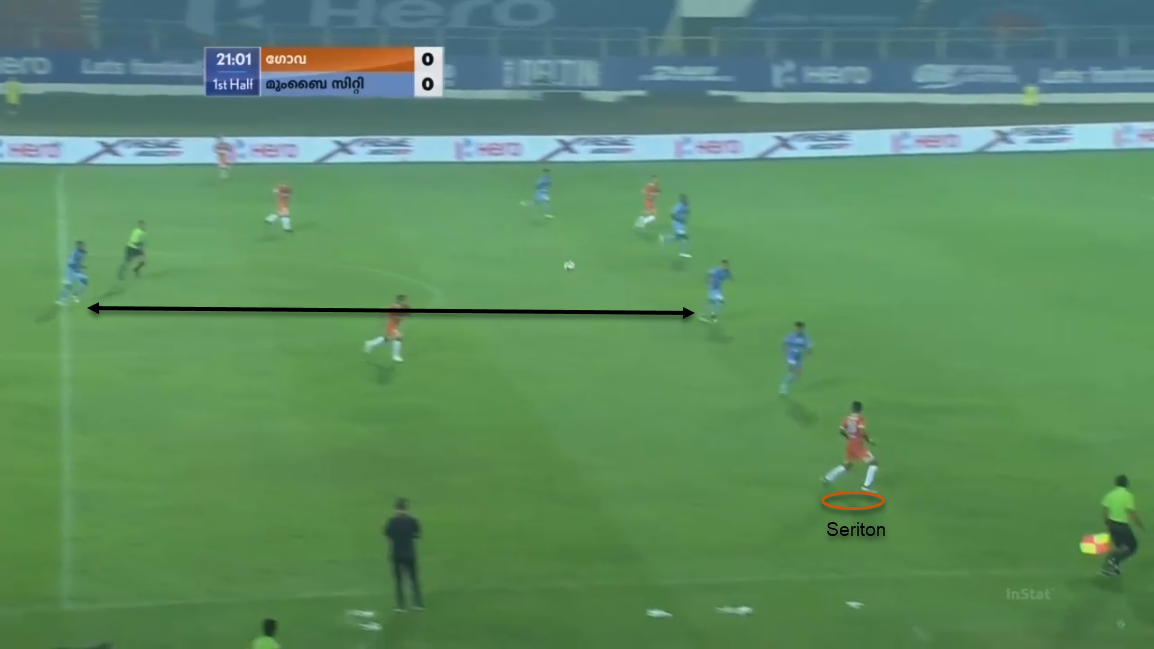 Since one of the pivots dropped in the backline for Goa, their full-backs had the licence to go forward. They were often located with a long pass since they had the space offered by the tight Mumbai backline. It is worth noticing the gap between Mumbai’s second line of defence and the last line of defence. Goa could have done a lot more damage by using this space effectively. Mumbai’s centre-midfielders were quick to quick to close the space once the ball went higher up the pitch and the gap seemed to be open only momentarily. 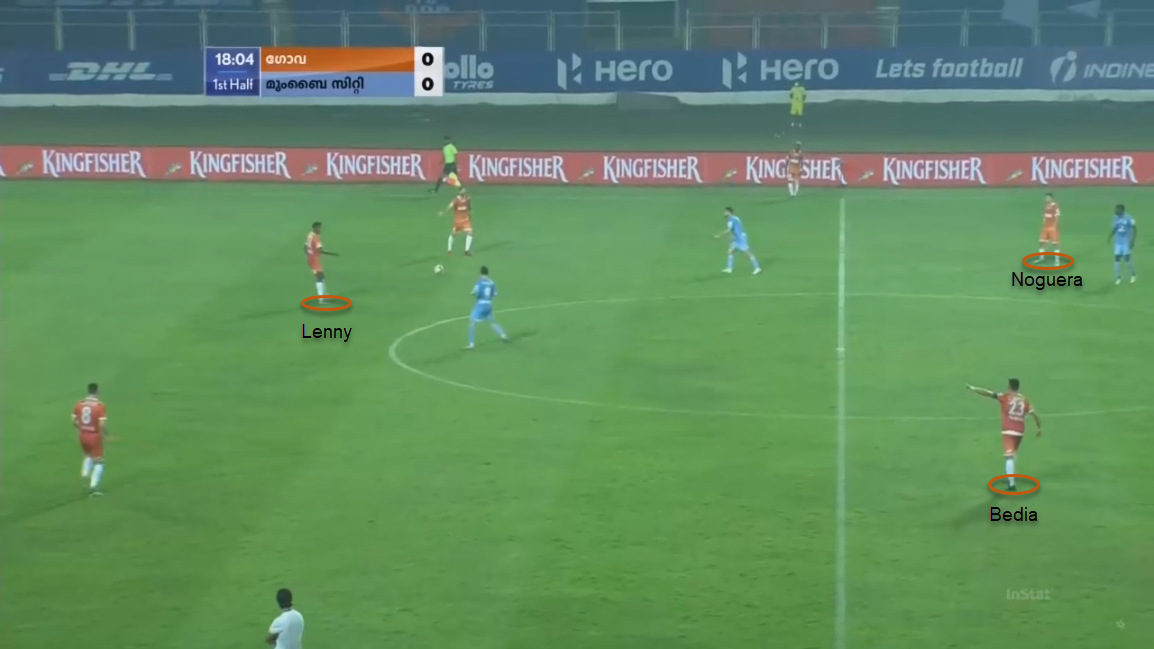 Noguera dropped deeper to help the ball progression. This was an advantage for Goa as there was an extra man against Mumbai’s zonal, which allowed either one of the full-back to be free. Hence the occasional long passes/progressive ground balls were played to them. With Noguera dropping deep, Goa could have tried inverting the wingers to make better use of the space between the lines. They too struggled to create convincing chances from the final third. They managed to get only shot on target in the first half and that was from a direct free-kick.

Tlang’s two-footed challenge on Santana ended with up him seeing a red card. It changed the dynamics of the game and the coaches were forced to rethink and remodel their approach. 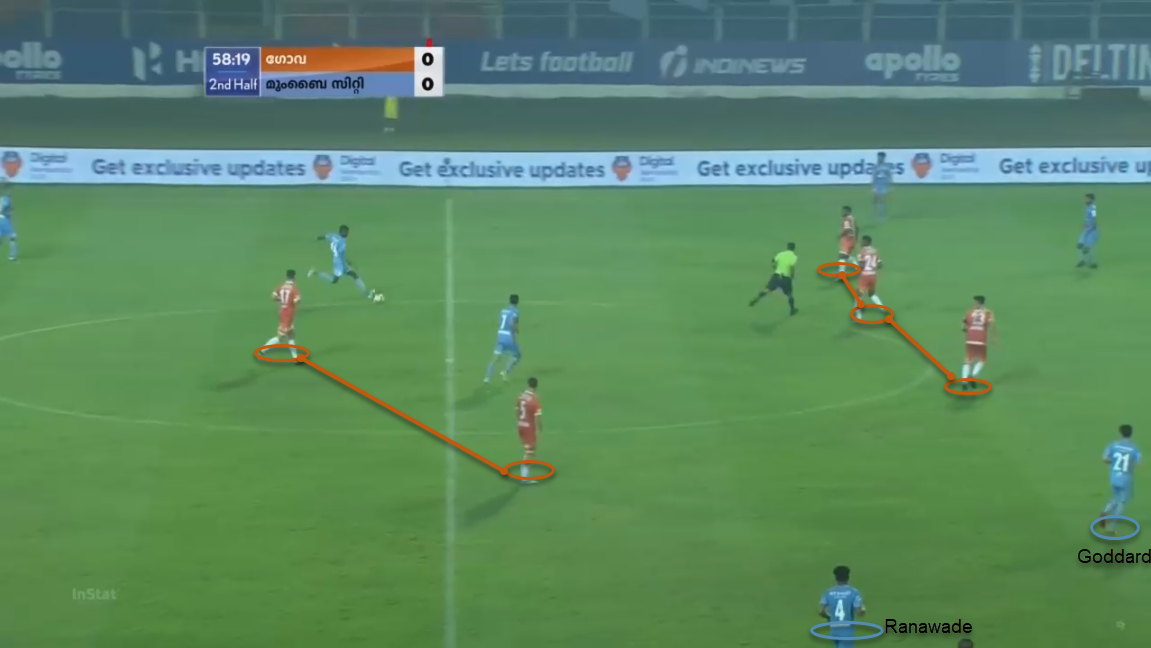 The Islanders naturally took control of the game after Goa’s Tlang receiving a red card. They moved to a 2-3-5 formation. In order to incorporate Boumous and get the best out of him, he was asked to play in the centre of the midfield line and not an following the former advanced role. He had more time on the ball to pick him precise passes and had to dribble less. Goa was still determined to apply passive press in a 4-3-2, particularly targeting the left side towards Fall. This would transition to a 4-4-1 as the ball entered their defensive half.

Mumbai City shifted its focus to creating their chances from the right instead of left. It’s a well-curated tactic as the transition of opposition from 4-3-2 to 4-4-1 happens on the left (Mumbai’s right), i.e., Noguera who is an attacking midfielder is filling in for a winger and while he is pressing high, he must also ensure timely reorganisation to midfield four. This makes the channel bigger to take advantage of. Ranawade and Goddard were instructed to stay parallel in order to play between the line, use the channel efficiently and make life difficult for Gama. The idea was to get the ball to the free player to deliver crosses. They kept hitting the same space with diagonal passes and either Ranawade or Goddard picked the passes from the channel. In their absence, Le Fondre dropped to execute the same task. 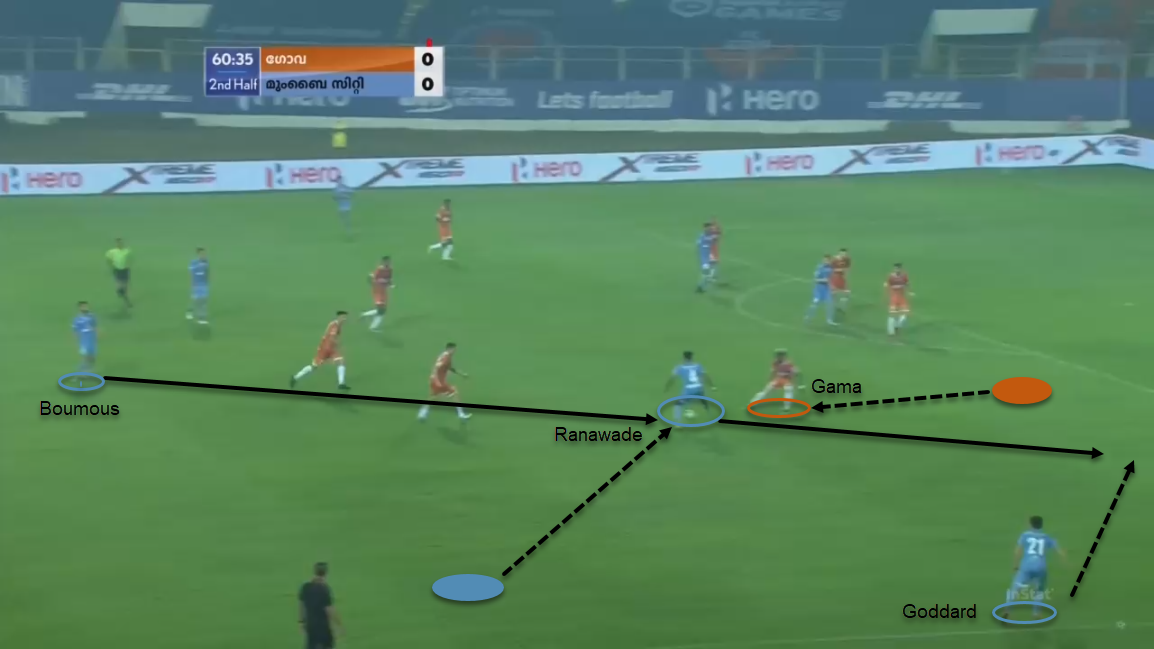 Yet the most astonishing part was Gama’s positioning. He seemed a bit hyped and played with intensity. Intercepting a couple of passes must have definitely boosted his confidence. But it was immature to not assess the threat of a 2v1 situation. He would always look to pressure the player in the half-space and get easily dragged out of position. He has a good pace to recover but still, he couldn’t do enough to stop the crosses. 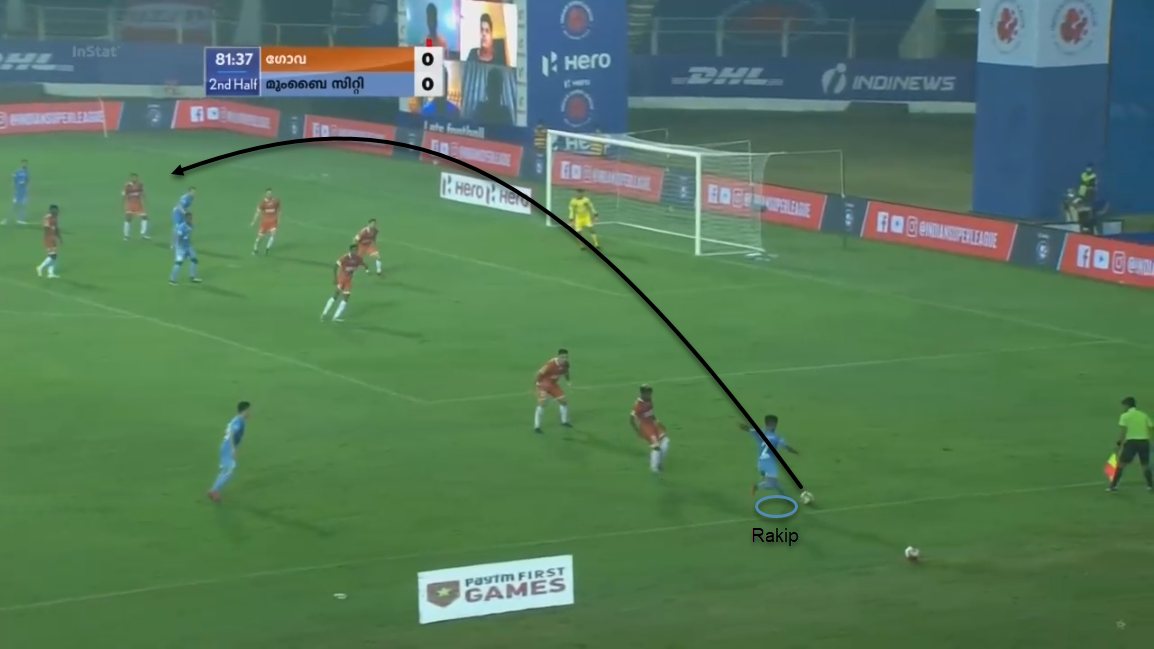 Mumbai City delivered 20 crosses in the game, out of which 15 came from the right flank. Rakip was brought in place of Ranawade to influence overlapping runs and consistent crosses inside the box. Mumbai City continually targeted the far post, but it was difficult to establish aerial dominance with the likes of Farukh and Mandar attacking the far-post. Donachie made seven clearances with one of both successful interceptions and tackles.

Former PSG striker Bartholomew Ogbeche was brought in to partner Le Fondre and the attack the box. Bipin Singh was also introduced in place of Mandar. His header from the far-post hit the hand of Lenny in the last minute of the game and won them a penalty. Le Fondre netted his first goal in the ISL and provided the winner for Mumbai City. 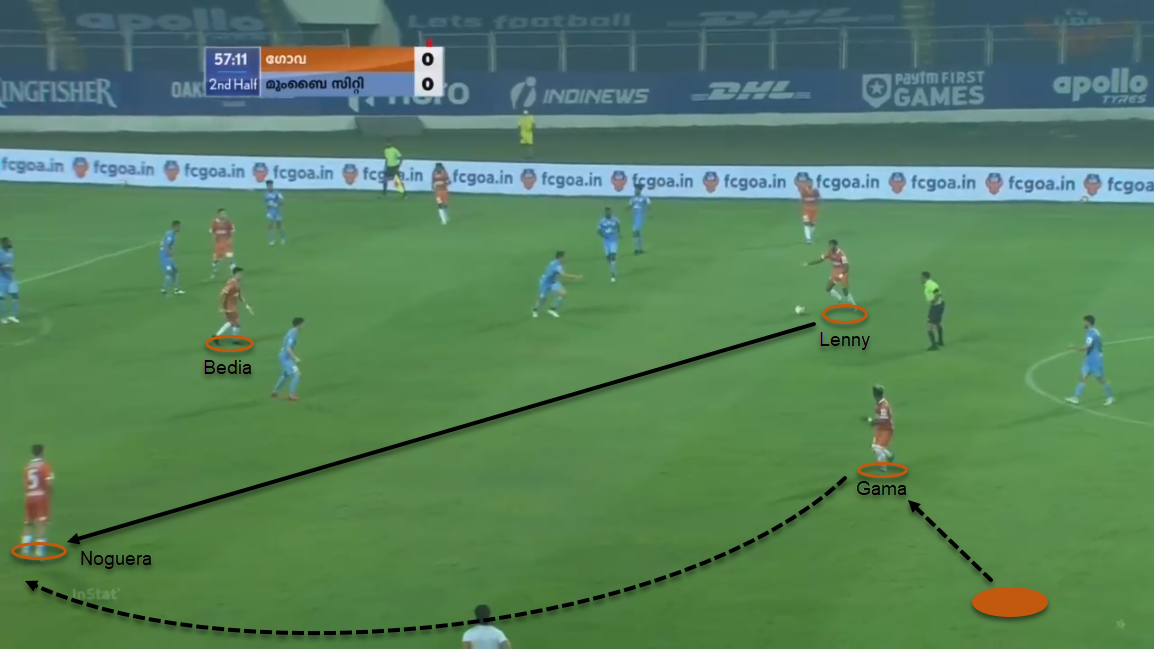 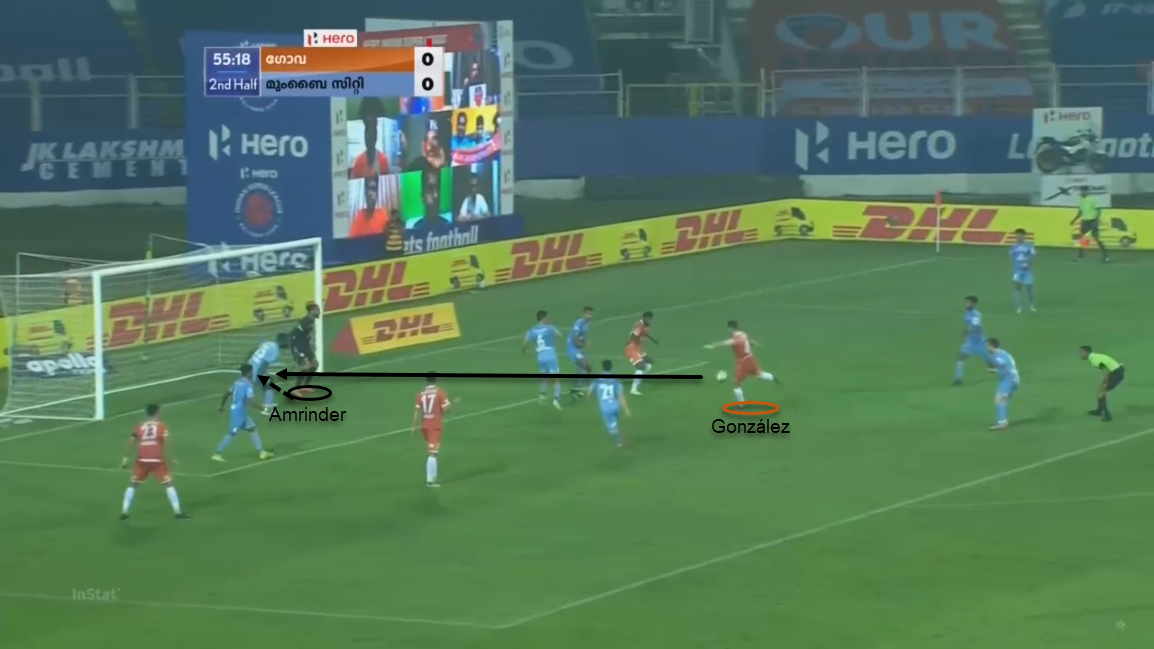 Despite the seldom chances, Goa came the closest to scoring in the second half. They took seven shots, out of which two were on target in the second half. Amrinder matched the quality of the shots with his exquisite saves and made sure that Mumbai bagged the three points.

Ferrando’s team has shown tremendous grit and fighting spirit despite the results not being in their favour. The Spaniard has managed to give this team a new identity in a very short period. The omission of Brandon Fernandes was a bit surprising but they did a great job never the less.

Lobera would be a relieved man after the final whistle. Mumbai are yet to register a shot on target from the inside of the box from an open play. However, it would be unfair to draw conclusions about the teams with just two games into the season. Mumbai City will go up against SC East Bengal in the next match.