Divković moved to Dunajska Streda in summer 2017 at age 18. He joined from Arsenal’s youth academy based in Solun where he played four years and often participated in the training and matches in London which just shows that from a young age he caught the eye from scouts. Divković managed to play 114 matches for Dunajska Streda since arriving in Slovakia. In this analysis, you will find out why Divković could be interesting to clubs from better leagues.

Marko Divković is 21-year-old forward that can play as centre forward and on both wings. He showed quality performances on right-wing and centre forward this season. He as well made a debut for Croatian U21 national team this month. We can see his heatmap from this season. 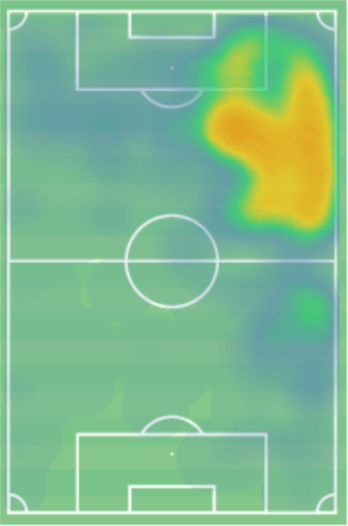 In the Dunajska Streda tactics and formation this season he mostly played on right-wing and his heatmap indicates that. Because he is left-footed he often tries to cut inside to shoot, but he is not limited only on his left foot because he has very good right-foot as well. Divković is a fast player which allows him to exploit higher defensive lines by running in behind. This season he showed composure in front of goal which is represented by a number of goals he scored. In the next sections, we will make a more detailed analysis on his qualities and mention the areas he could improve.

In this section, we will mostly analyze how Divković looks to move without the ball into more dangerous areas and his movement in different situations. When he plays on right-wing Divković mostly tends to cut inside by dribbling, but if he has open teammate that looks for one-two he will use his help to avoid first obstacles in the path. On the image below we can see one of those situations. 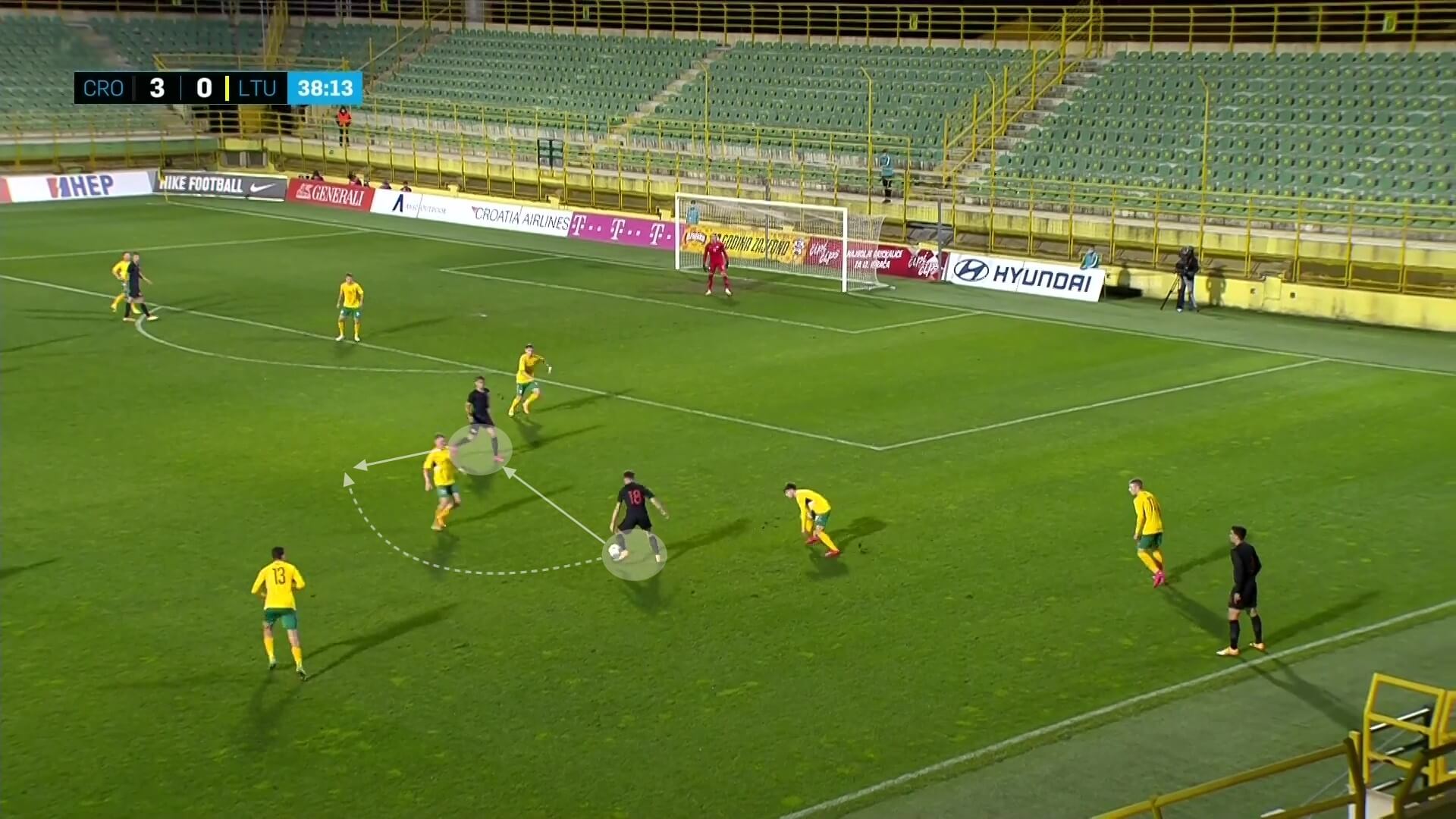 Divković received the ball from full-back into the feet and turned around towards the central area of the pitch. Divković is pressed by two defenders from both sides, but his teammate arrives into the halfspace to offer him an option for a one-two. He decides to pass the ball to his teammate and accelerate around the opposition player to receive the ball back. When he receives the ball he has more space into the central area and can make a vertical run towards the penalty area.

Everybody knows that ball is faster than the player and on the example below we can see Divković understanding that he can be more dangerous with a simple “pass and run” football. 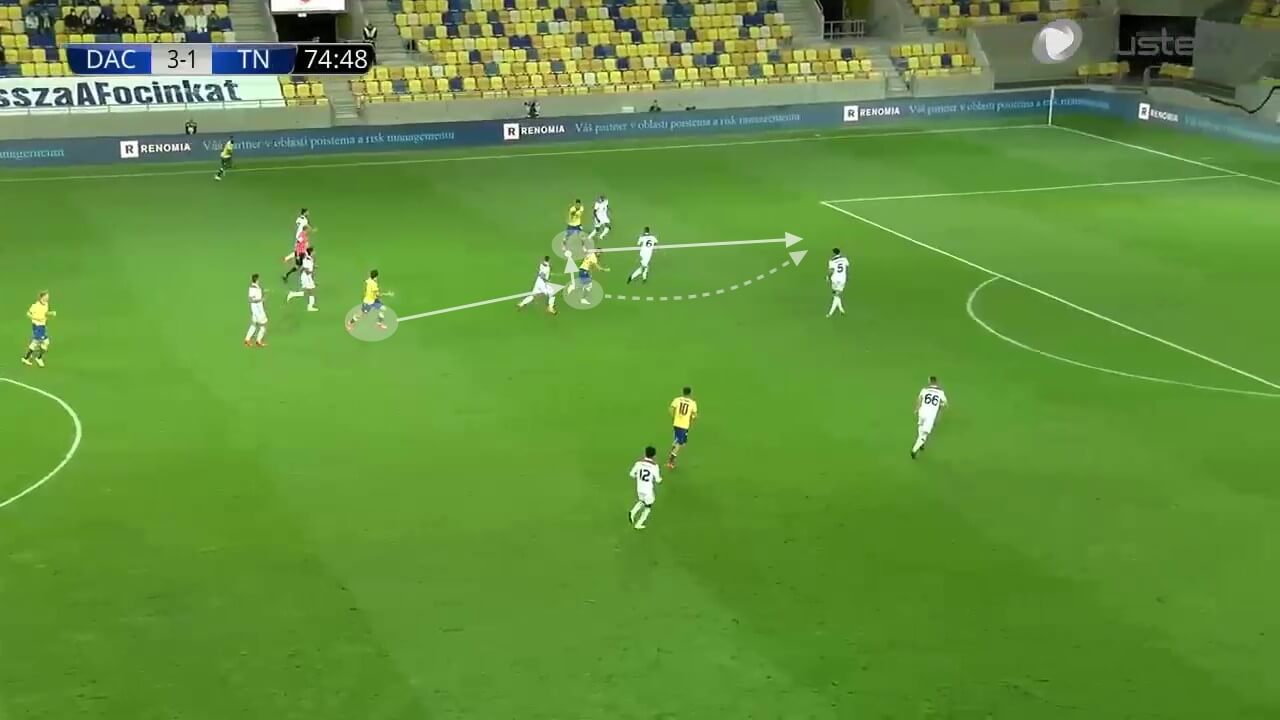 On this example, we can see how Divković shows quality spatial awareness and off the ball movement to get into a promising chance. He received the pass from his teammate that is positioned in the central area of entrance into the final third and makes first touch flick towards his teammate who positioned himself in the halfspace. Instantly after making a pass, he accelerates into the open space behind two players who are drawn to the ball carrier.  The opposition left centre-back needs to drop down to cover the space behind his teammates which allows Divković to avoid offside. Divković receives the ball in the penalty area with only one player who can stop him, but given his pace most of the defenders won’t be able to close him down before he shoots on goal.

The example below shows another run behind the defence. 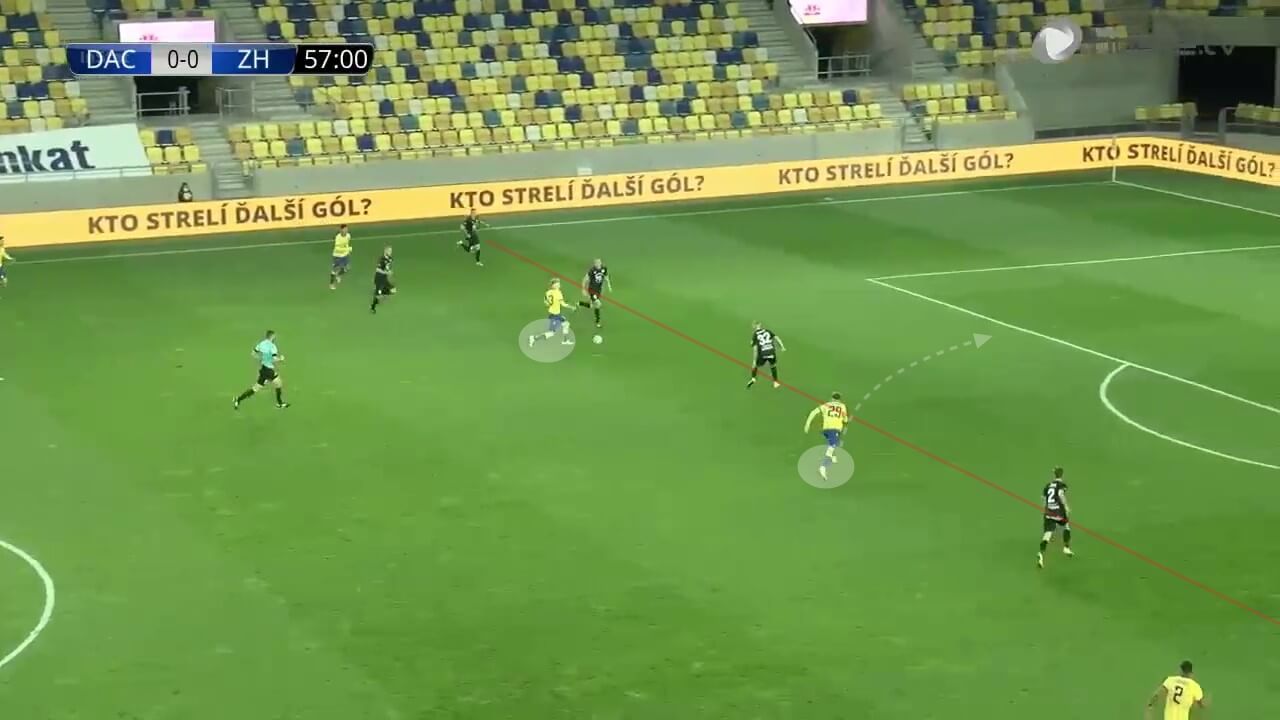 In this situation, attack started from the left side and Divković didn’t contribute in the build-up. He followed the attack by jogging and then accelerated into the space behind the defence where he received the ball in goal scoring opportunity. The arrow on the image is curved for a reason, it represents his curved run into the space. It is important to mention that his curved run allows his teammate on the ball one second more to recognise his run and to pass behind the defence avoiding being caught offside.

The last example in this section is another quality run without the ball which led to goalscoring chance. 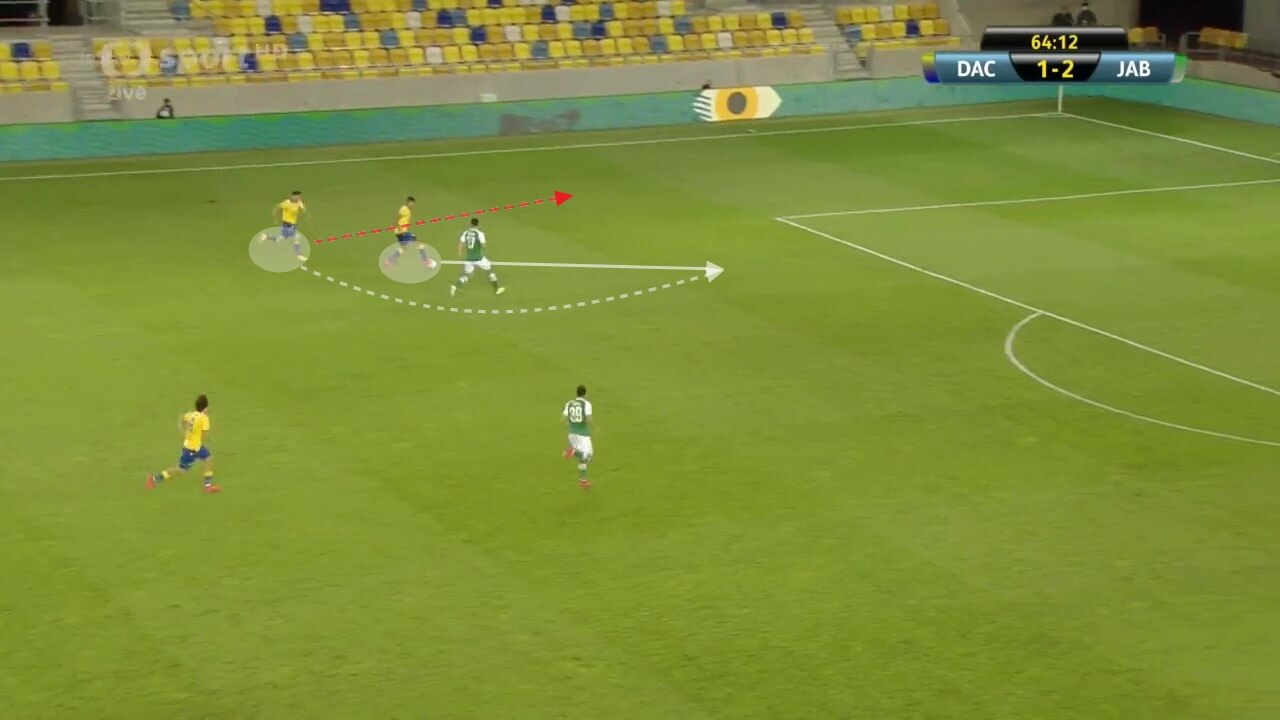 Divković teammate received the ball in 1v1 situation in the counter-attack. Divković makes underlap run, this time also his run gives teammate more time to recognise his run and decide to pass to him or dribble opponent from the outside. His run also draws attention from opposition player which now needs to watch on two players in wide space where he is clearly disadvantaged. His teammate waited for him to achieve full pace before playing the ball around the opponent into goal scoring chance. If he chose to run from outside it would endanger him to being caught offside.

After going through situations where Divković makes an impact without the ball, in this section we will evaluate his actions when he is in possession of the ball. In the example below, we will see the most common situation when Divković receives the ball in the opponents half on the right side. 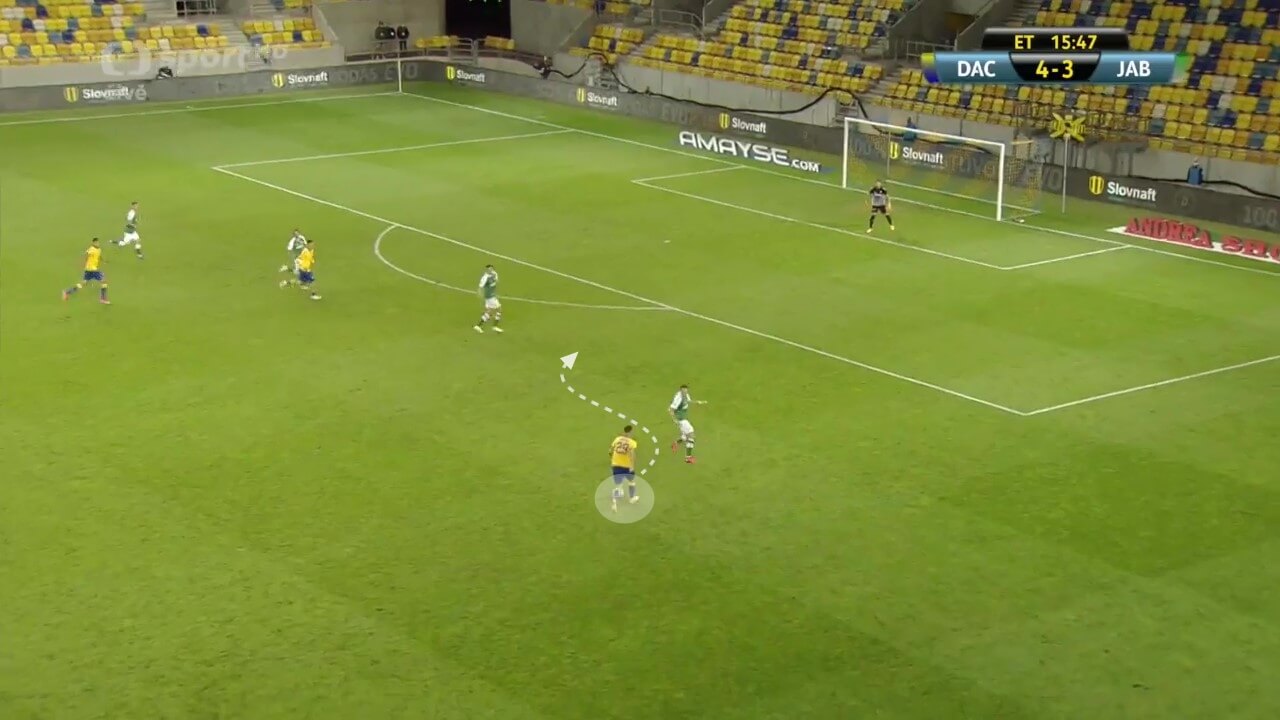 What he often does is that he cuts inside on his stronger foot. He runs with the ball directly at the defender trying to draw him into tackle before suddenly accelerating and changing direction towards the central area. Divković has good ball control which helps him in this sequence. After getting into the area closer to the goal Divković often looks to shoot. On the shot map below we can see the areas from where he shoots. Gold stars represent goals while blue circles represent shots. 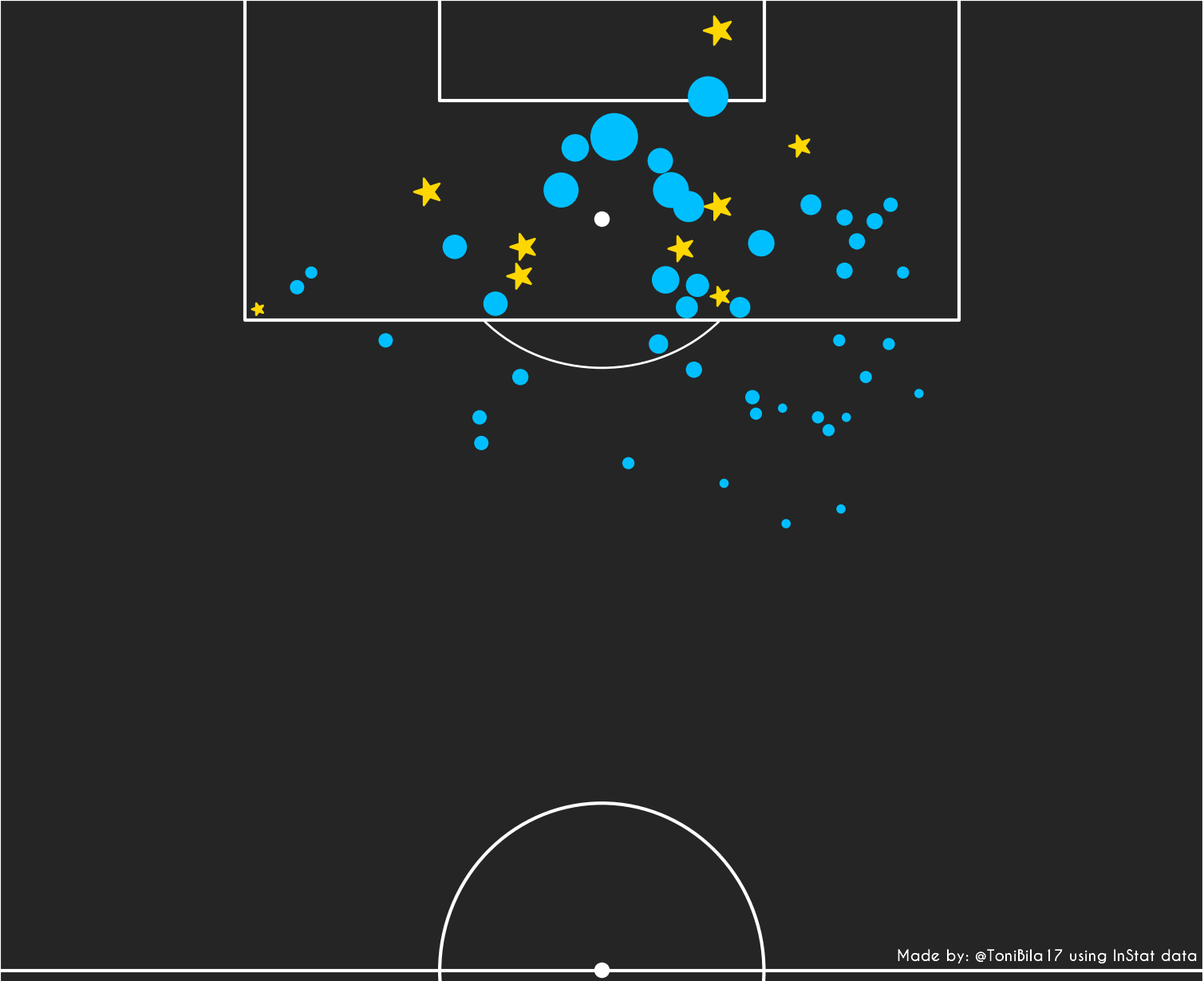 We can see that he often shoots from that halfspace closer to the right side. It is evident that he has a favourite shooting area, but if he wants to be a player for a better league he needs to change that. In xG theory, it is known that it is more efficient to shoot from central areas because the player has a wider angle.  We can assume that most of the right-sided blue circles are shots he created for himself with dribbling and if he could run with the ball closer to the semicircle at the top of the penalty area before attempting a shot it would increase the value of his shots. For a player with a quality shot he needs to look how to get into better spots when in possession of the ball. He scored all goals from inside the penalty area and most of them were from the central area which increases the xG value because of already mentioned wider angle.

On the example below, we can see a situation where he fakes a shot and tricks two opponents. 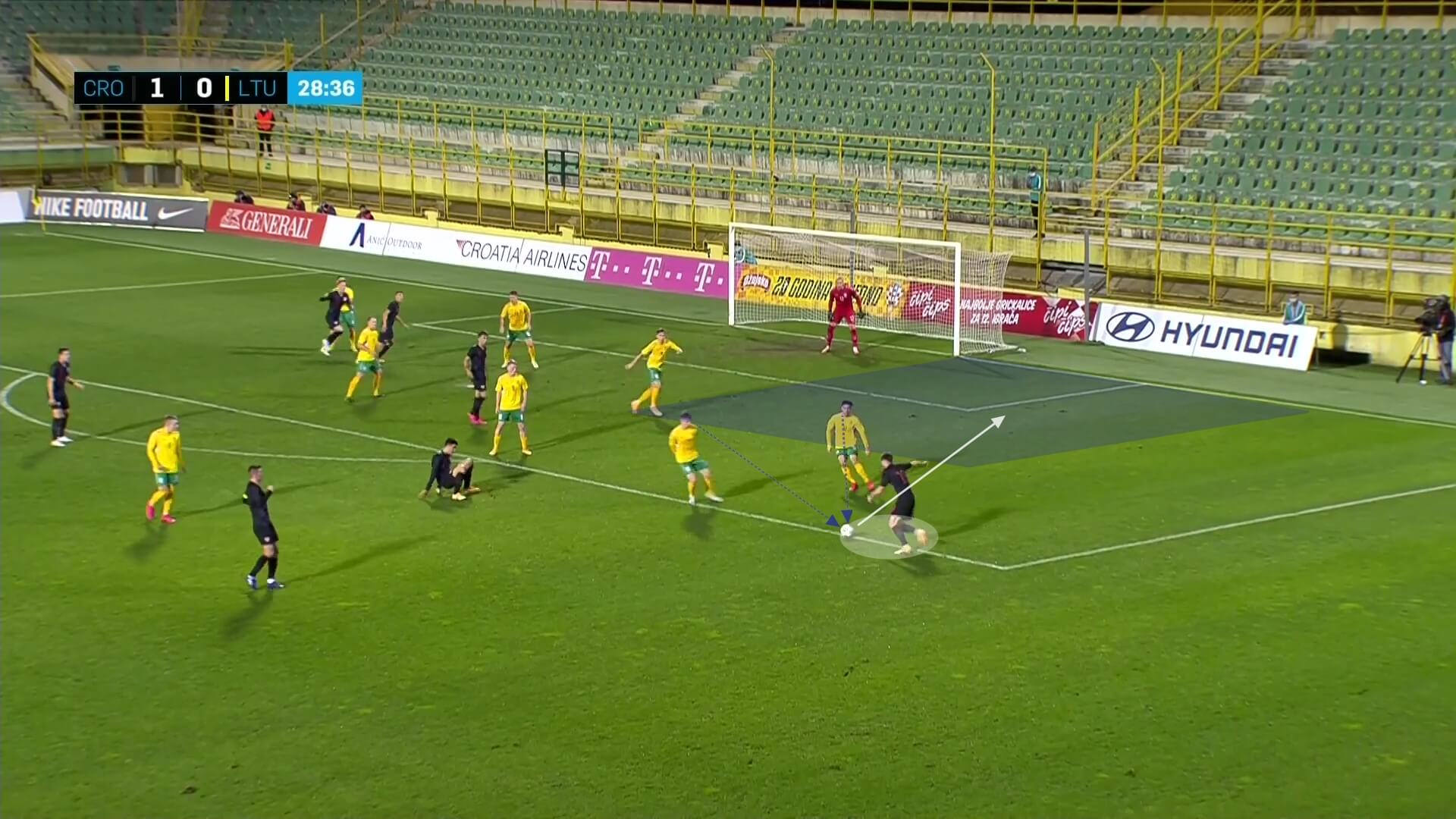 Why this situation is worth showing is because he is not limited only on actions with his left foot. Even though he adjusted his body for the shot, he noticed he would get blocked if he attempted shot and decides to trick the opponents and dribble them by going onto his right foot. Opponents were not ready for that because they left a lot of space in the penalty area which gave Divković enough time and space to pass the ball through 6-yard-box for his teammate who scores in the empty net. Divković won’t avoid using right foot and will often look to go to the right if his opponent closes him on his stronger foot. It is a good trait to not be a one-dimensional player, for example, Manchester City star Riyad Mahrez worked on his right foot through the seasons. Before he avoided using his right foot and going onto his right, but to play on top-level like Premier League constantly, he needed to upgrade his game. That just shows that Divković is on the right path in this area.

The last example will show how Divković can facilitate for his teammates. 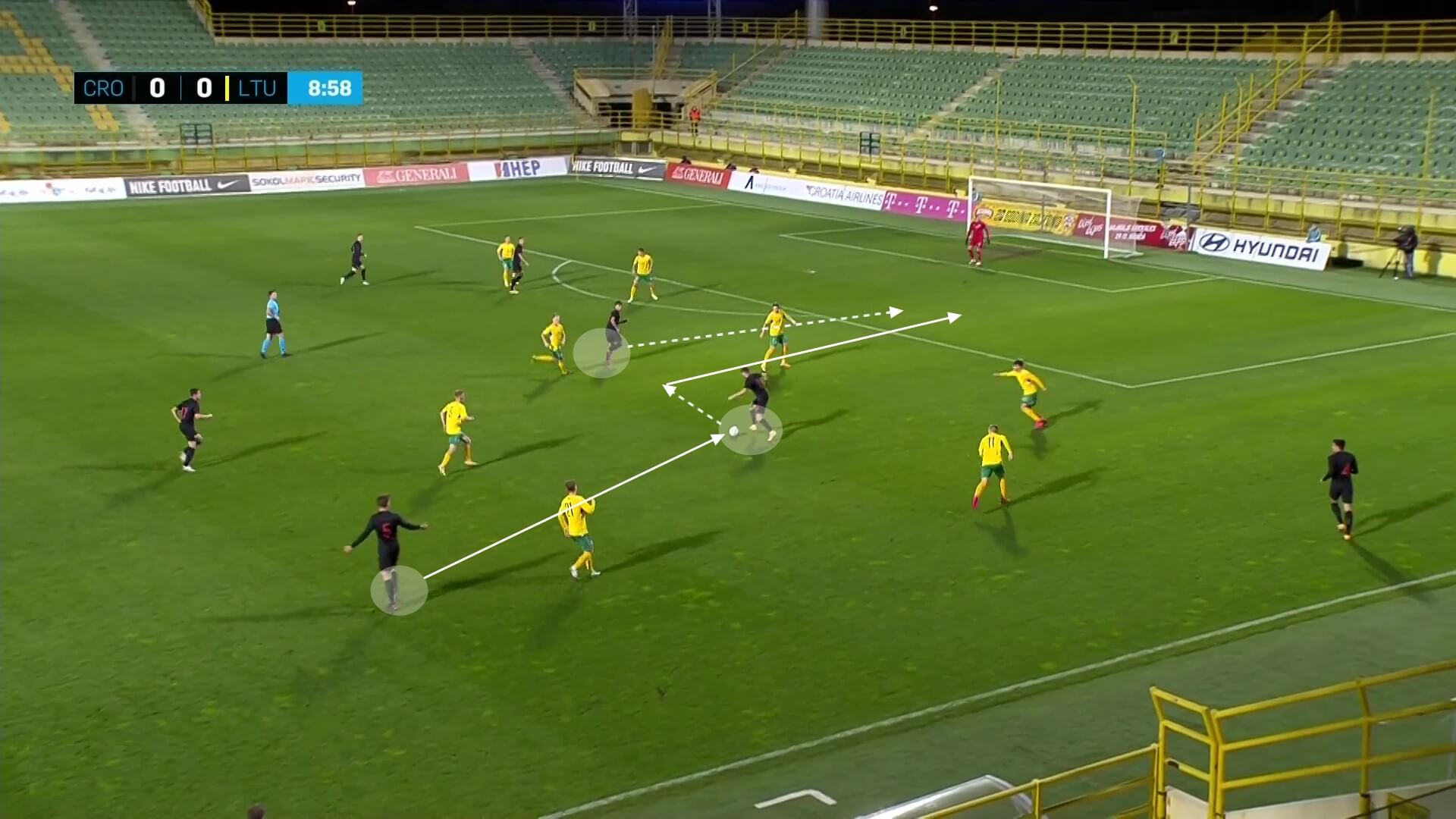 Divković receives the ball in the halfspace from his teammate and we can see that he separated himself well from the opposition players which gives him enough time to process the ball towards the goal. He makes lateral first touch and sees his teammate running behind the centre-back who is focused on Divković. He attempts the through ball into the penalty area between the centre-back and full-back. It is still a long way to go to see Divković do it in each match, but it is worth noting that he can see those passes and that his teammates can expect that from him in similar situations.

After going through his offensive attributes we will now take a short look on his defensive potential. In the example below, we can see one situation where he fantastically reads the situation and closes down the opponent. 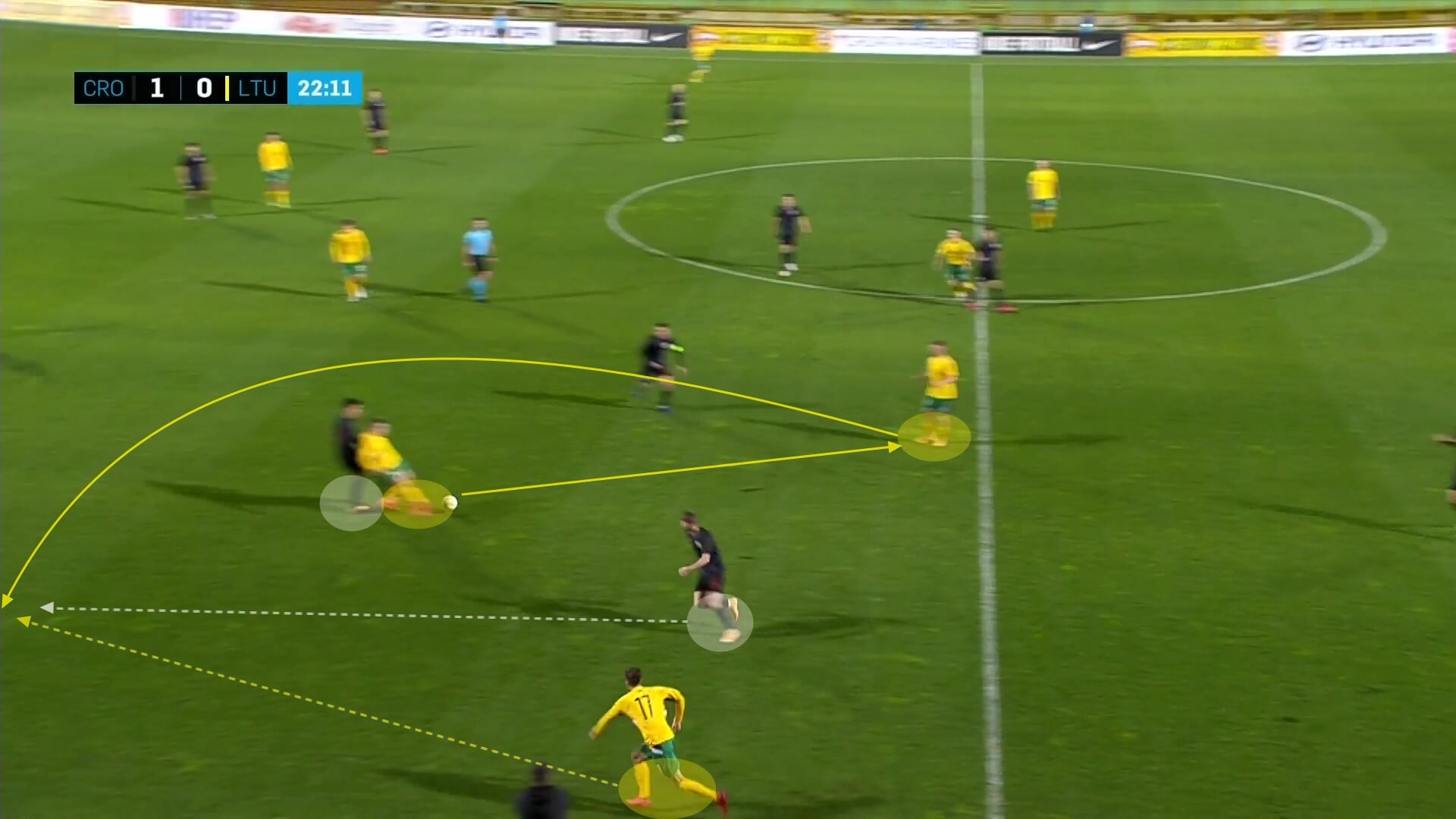 Opponent tightly marked by right-back makes backpass towards the midfielder. Divković reads the situation well and runs behind his teammate to close the gap left behind. In the moment when opposition midfielder plays the ball into the space behind it is already too late because Divković is already there thanks to his pace. Even if the opponent pass ends in his teammate’s feet, Divković is still in a position to close him down. To do this on a constant basis Divković should work on his stamina and fitness, to be in a position to contribute in both directions without taking a break.

Through all sections, we mostly talked about his strengths, but in each, we pointed out some areas where he could improve. He still has room to improve his passing and ball control which is on a good level, but performing a little bit better in these two areas would mean a lot for his offensive arsenal. The great thing about him is his self-confidence at such young age, but self-confidence sometimes pushes him to shoot from “wrong” positions, as we already said better decision-making from where to shoot would bring more goals from him. At last, we talked about his defensive side in terms of a winger where he played often this season, but if we take into the account that his natural position is centre-forward it is reasonable to give him time to adapt to his defensive duties. He should work on his aggression when pressing and improve his stamina, it would bring more from him in the defensive phase. Still, when he is motivated he shows a tendency to help defence a lot and try to recover the ball by pressing the opponents.

This analysis gave us the information about Divković playing style and his potential, we tried to include his most important attributes and how he can improve in the future. He has big potential, it is not surprising Arsenal scouts noticed him at age 13 and it looks like he made a right decision to leave the academy and start playing first-tier football because he made progress each season he played. This season performances haven’t gone unnoticed and it is a matter of time till he departs to the better league.