This scout report will contain tactical analysis on Angeliño attributes and his playing style. Spanish left full-back currently plays for RB Leipzig on loan from Manchester City, but RB Leipzig is obliged to buy him at the end of the season and given his performances they will be happy to make him their player permanently.

Even though he is 23-year-old he already played in many clubs because Manchester City loaned him to help his development. He played in Eredivisie, LaLiga 2, Premier League, MLS and Bundesliga. He showed on each loan that he is the player who can adapt to a different league, club and tactics. This season RB Leipzig philosophy brings out the best from Angeliño in the offence.

Angeliño is 23-year-old attacking-minded full-back and that is the reason why he looks quality when plays as a wing-back or wide midfielder in formations with three centre-backs. Below we can see his heatmap and it just confirms how offensive he is and that he often gets into the penalty area. 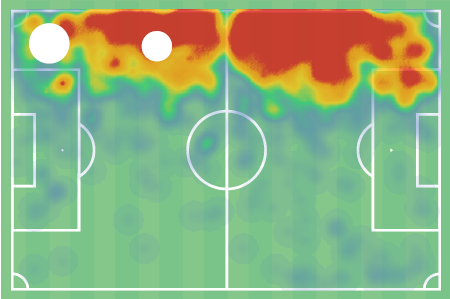 His stamina and work rate allows him to cover the whole flank and to participate in both defensive and offensive duties. Angeliño is fast and his low centre of gravity helps him control the ball well and bypass opponents.  Not only that he possesses impressive physical abilities he also moves well off the ball and makes smart decisions. His crossing is his top quality because he delivers outstanding crosses into the penalty area.

As we already mentioned his deliveries into the penalty area are often followed with a chance for his teammate. Below we can see one example of how RB Leipzig looks to overload penalty area anticipating Angeliño’s cross. 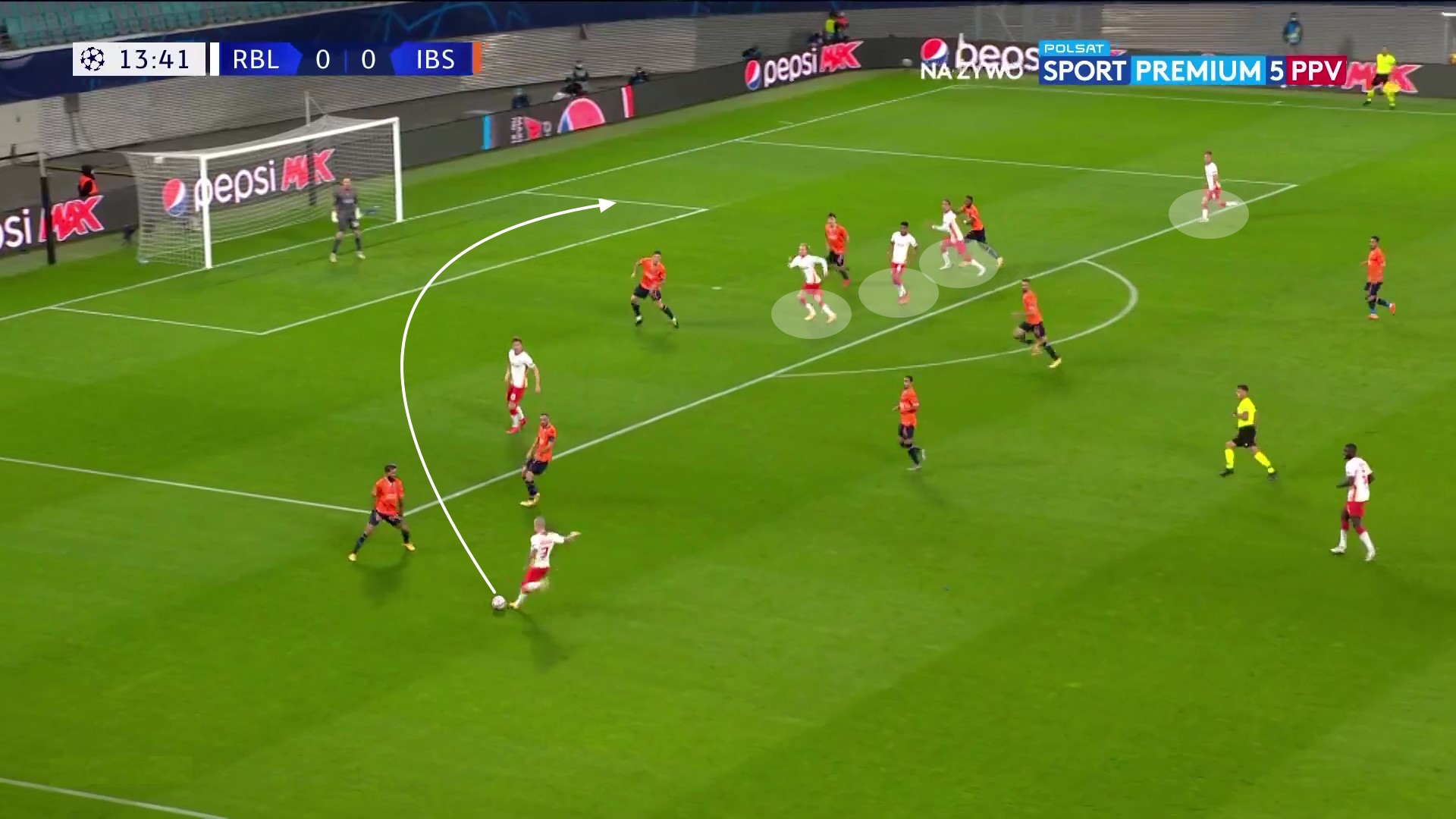 Even though Angeliño has a passing option between two defenders in front of him, he decides to cross because there is a lot of space between 6-yard-box and penalty spot from where his teammates can attack the cross. We can see that there are four RB Leipzig players (excluding one waiting for a pass) in the penalty area, three of them are running into the open space while Nkunku separates himself staying on the top of the penalty area. In season 2018/19 he provided 12 assists for PSV in all competitions and most of them were from crosses, this season he only has one assist, but it is a matter of time his teammates start converting his crosses into the goals.

Angeliño compensated his lack of assists with five goals in 11 appearances in all competitions, beating his previous record of three goals in 35 appearances for NAC Breda back in 2017/18. One of the reasons is his more offensive role in RB Leipzig formation this season where he has more freedom to join the attack and not exclusively tied to the left flank. Examples below show us how Angeliño uses his more offensive role to get into chances. His physical qualities in pair with high football IQ allow him to be a step ahead of his marker, especially in transition. 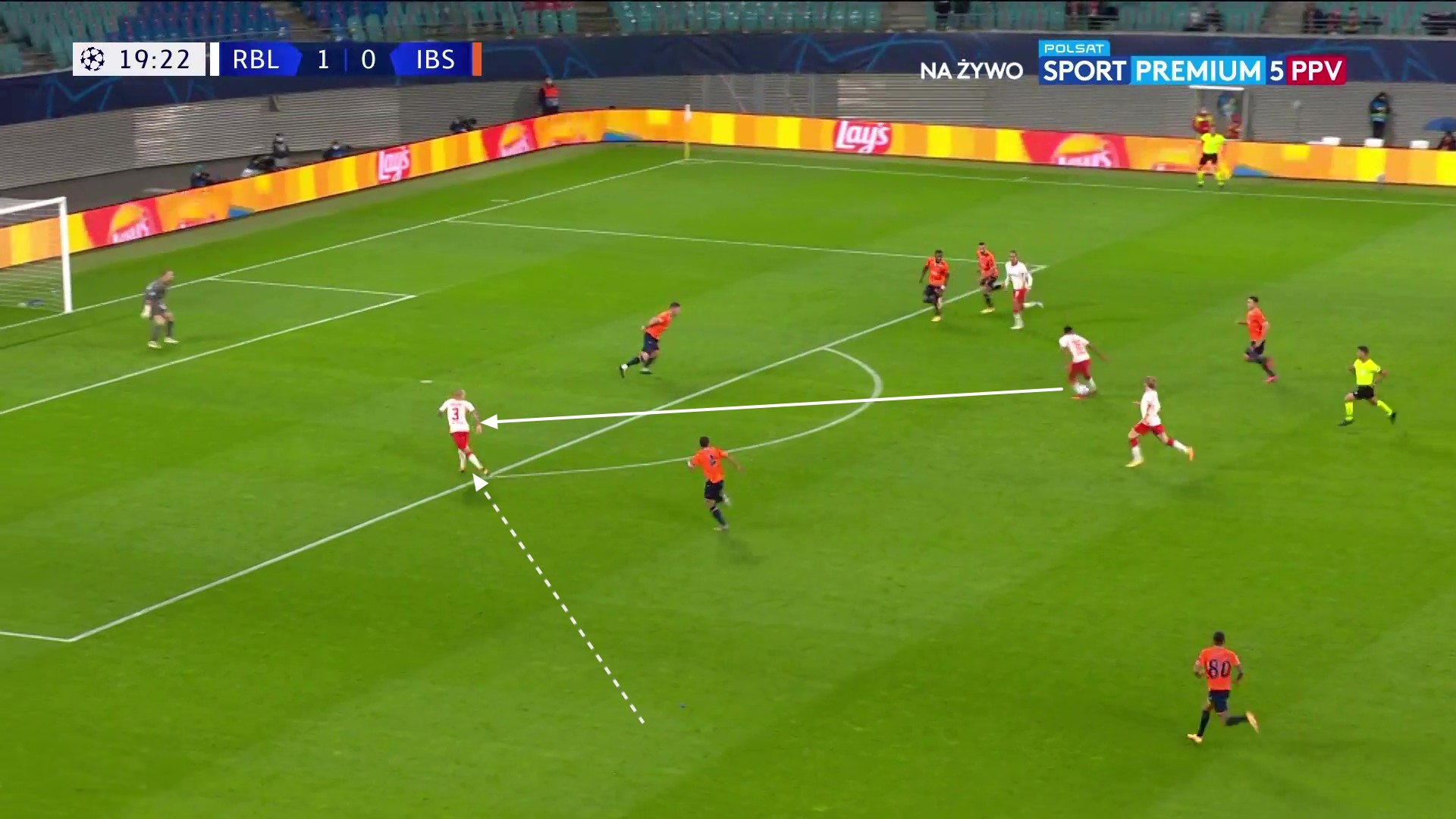 We can see how Angeliño recognised open space between opposition full-back and centre-back, while avoiding offside trap by slowing down a bit before Nkunku plays the pass. His movement in such an advanced area is praiseworthy because he is not rushing which could put him in offside, but rather times his run intelligently which gives his teammate enough time to play the pass towards him.

A similar situation is in the example below. This time Angeliño runs through the defence to receive the ball behind the defence. 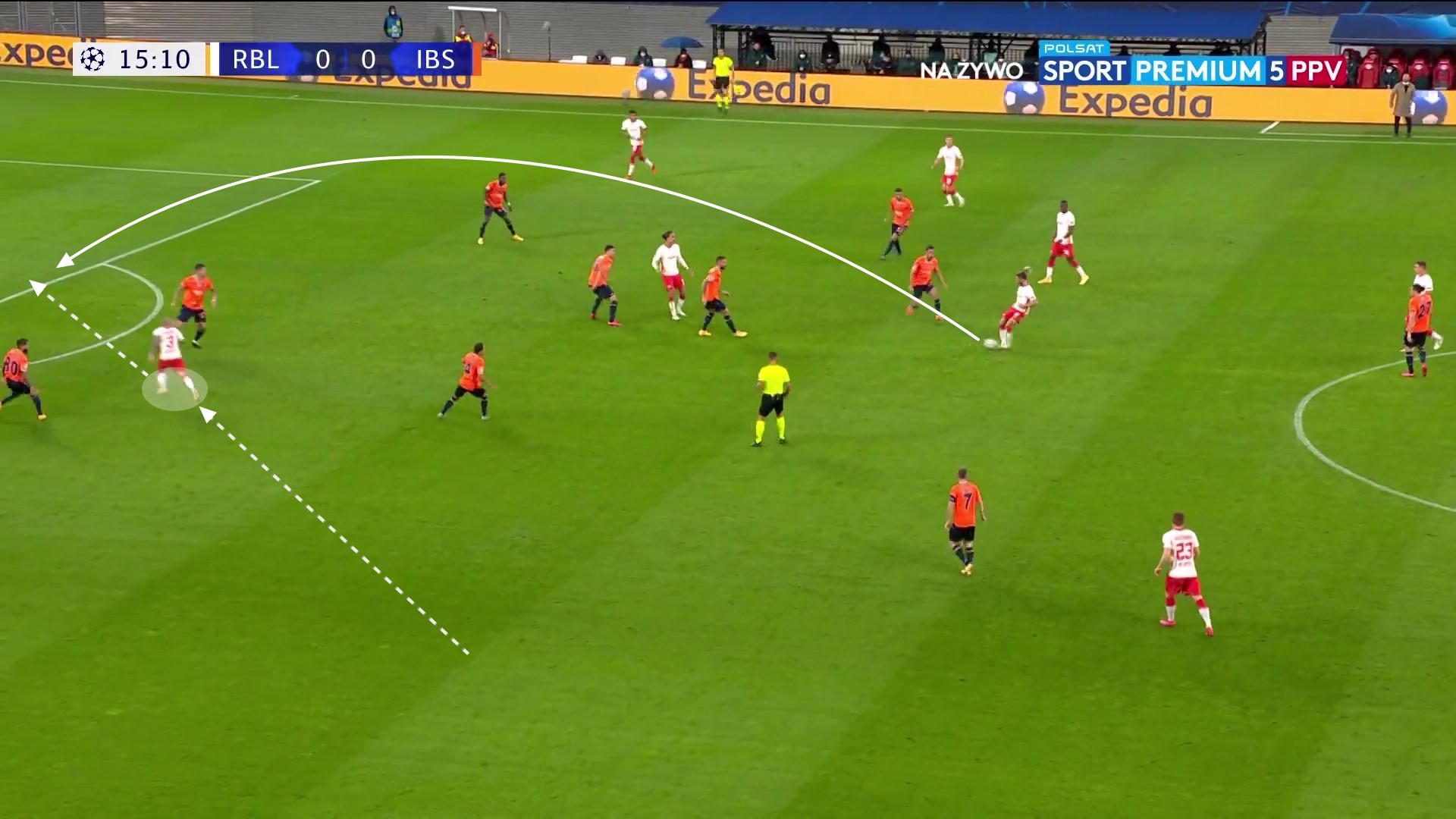 He recognised that Poulsen dragged one centre-back out of his position and Kampl spotted his direct run into the space and attempted a pass over the defence which puts Angeliño into the clear-cut chance.

Angeliño often uses his low centre of gravity to change direction in order to gain an advantage over his opponent in his off the ball movement. In the example below, we will see how his assessment to cut inside created open space for him. 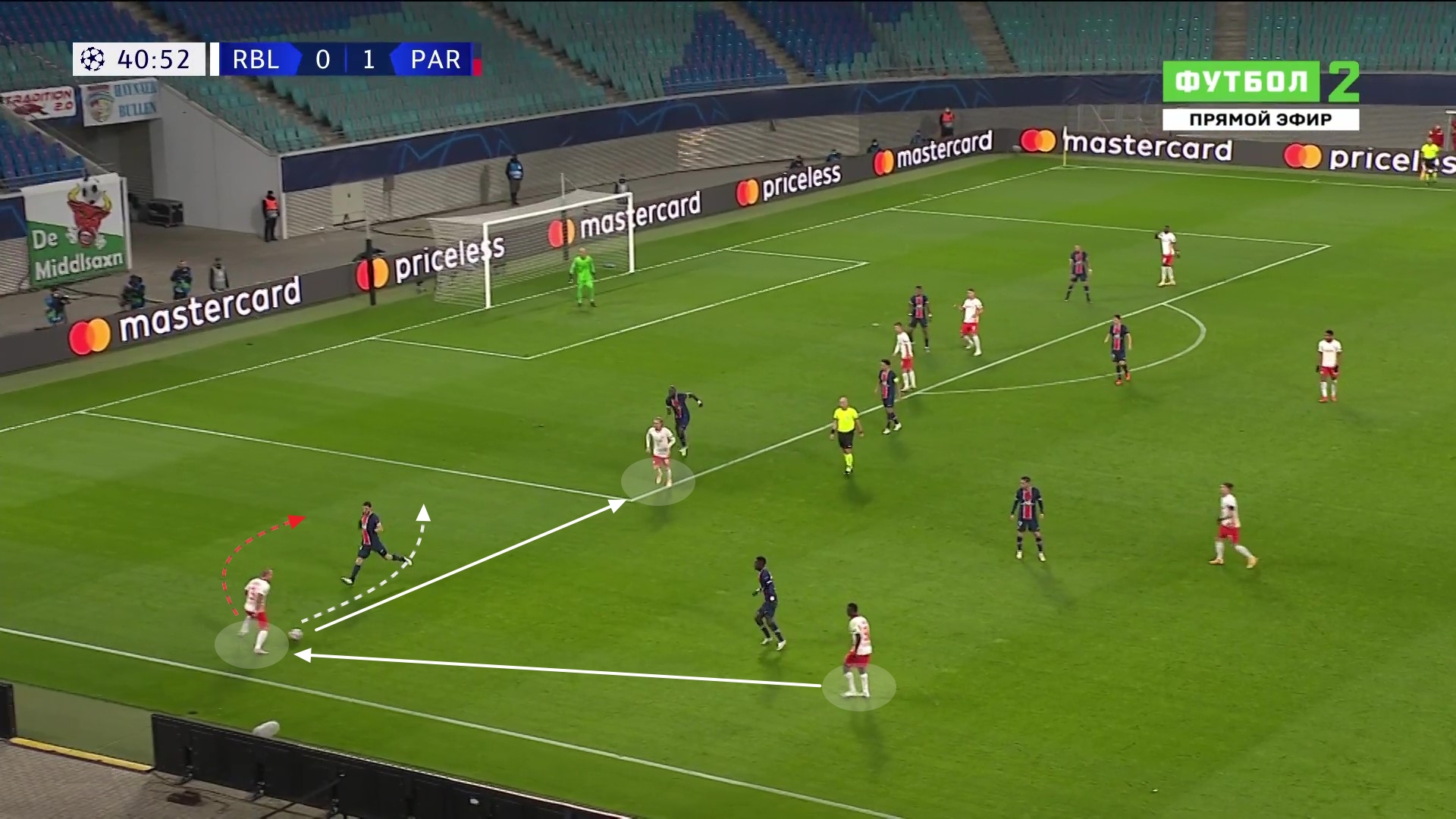 We can see that ball is passed towards Angeliño, he sees player running towards him at full speed and decides to play first touch pass towards his teammate at the edge of the penalty area. Now he can choose where he will continue his run, in most situations players choose to run along the line to receive the ball back. Running along the line would endanger Angeliño to be stopped by opposition player body movement because he stops right next to him and given that Angeliño is physically inferior to him it would be hard for Angeliño to go through, even if he does if his teammate doesn’t attempt first touch pass he will possibly end in offside. What he does in this situation is that he chooses to accelerate inside catching the arriving defender on the wrong foot and creating a huge amount of space in the dangerous area for himself to receive the ball.

The last thing we will mention about Angeliño’s offensive skill set is that he can create good situations with his passing and not only by crossing the ball. Example below will show us how Angeliño’s vision helps him identify his teammate run into the open space. 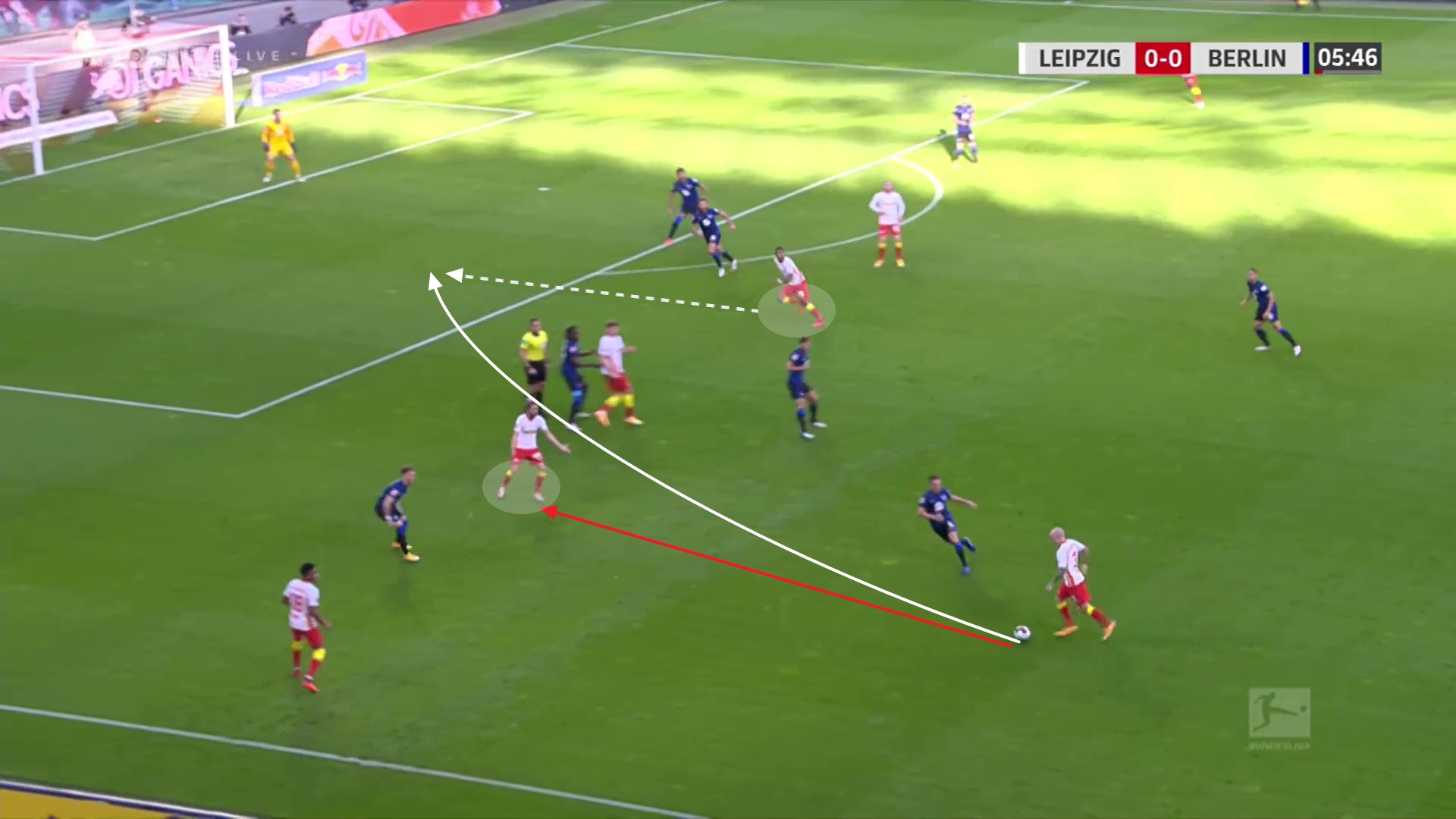 We can see that Angeliño has an option for a pass to Forsberg into the feet and even that is not a bad solution, he decides to play over him into to open space for Kluivert. Most of the full-backs would opt for an easier pass towards the Forsberg, mostly because they wouldn’t even see Kluivert run. However, Angeliño has the vision to see Kluivert run and also passing range to make that pass successful.

In the example below, we can see how Angeliño positions his body well to prevent potential one-two by opponents. 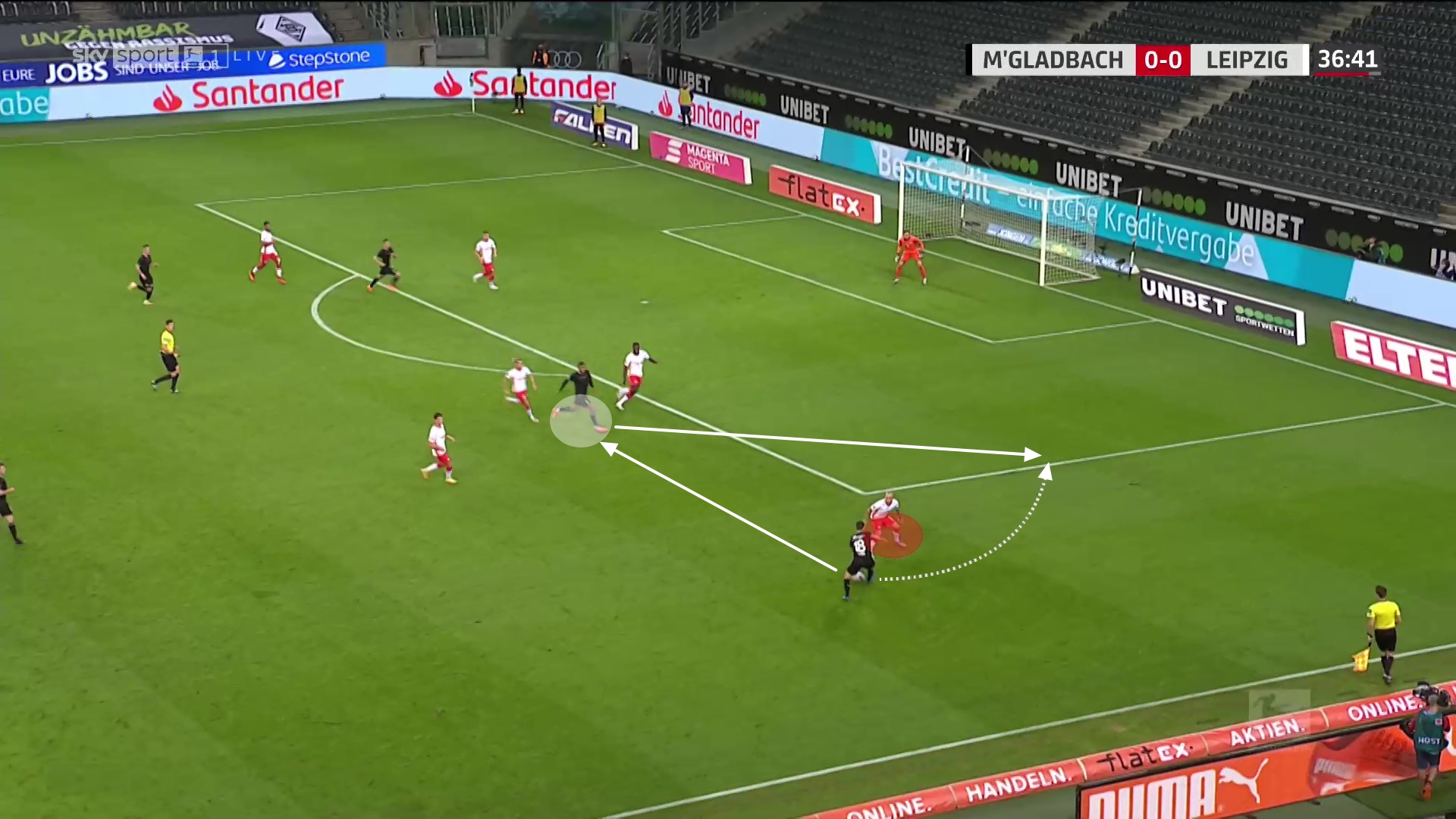 He is fully focused on his player and his body position helps him adjust to any potential action his opposition takes. If opposition tries to bypass him down the flank he is positioned well to interject into his path, but also if the opposition tries to cut inside he has enough space to adjust his body to prevent him going towards the goal. His opponent plays pass towards his teammate and runs from the outside to try and receive the pass into the open space behind Angeliño. 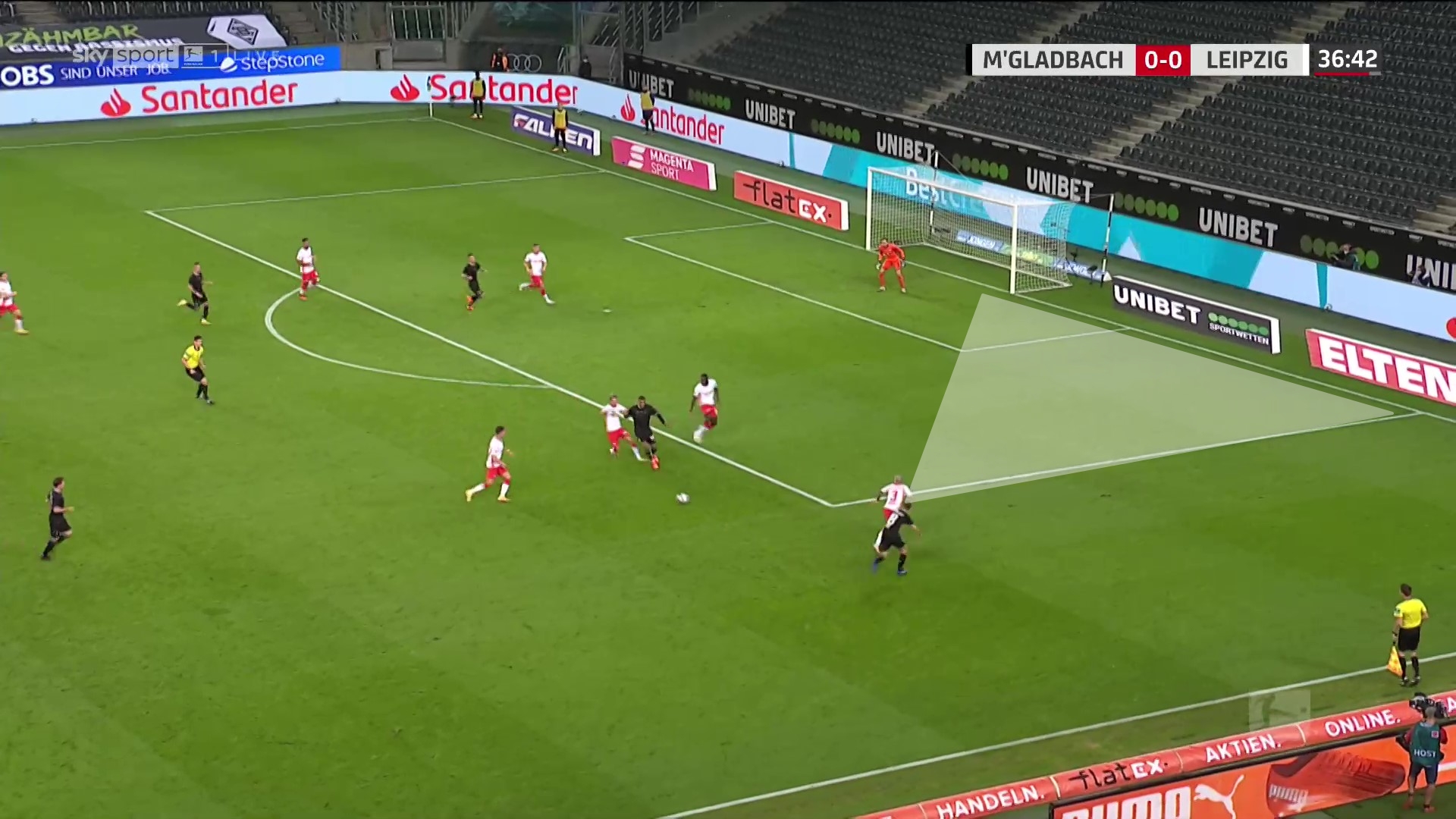 In the frame above we can see how Angeliño instantly turned around and makes a run to close space closer to his goal which is marked with a white triangle. Angeliño reaction prevents the opponent to play the shorter pass in the penalty area for his teammate.

In the next example, we will take a look into how Angeliño acts in pressing. RB Leipzig tends to press all over the field where everyone needs to be involved for it to be successful. Frame below will show us how Angeliño aggressively puts pressure on the opponent in order to recover the ball. 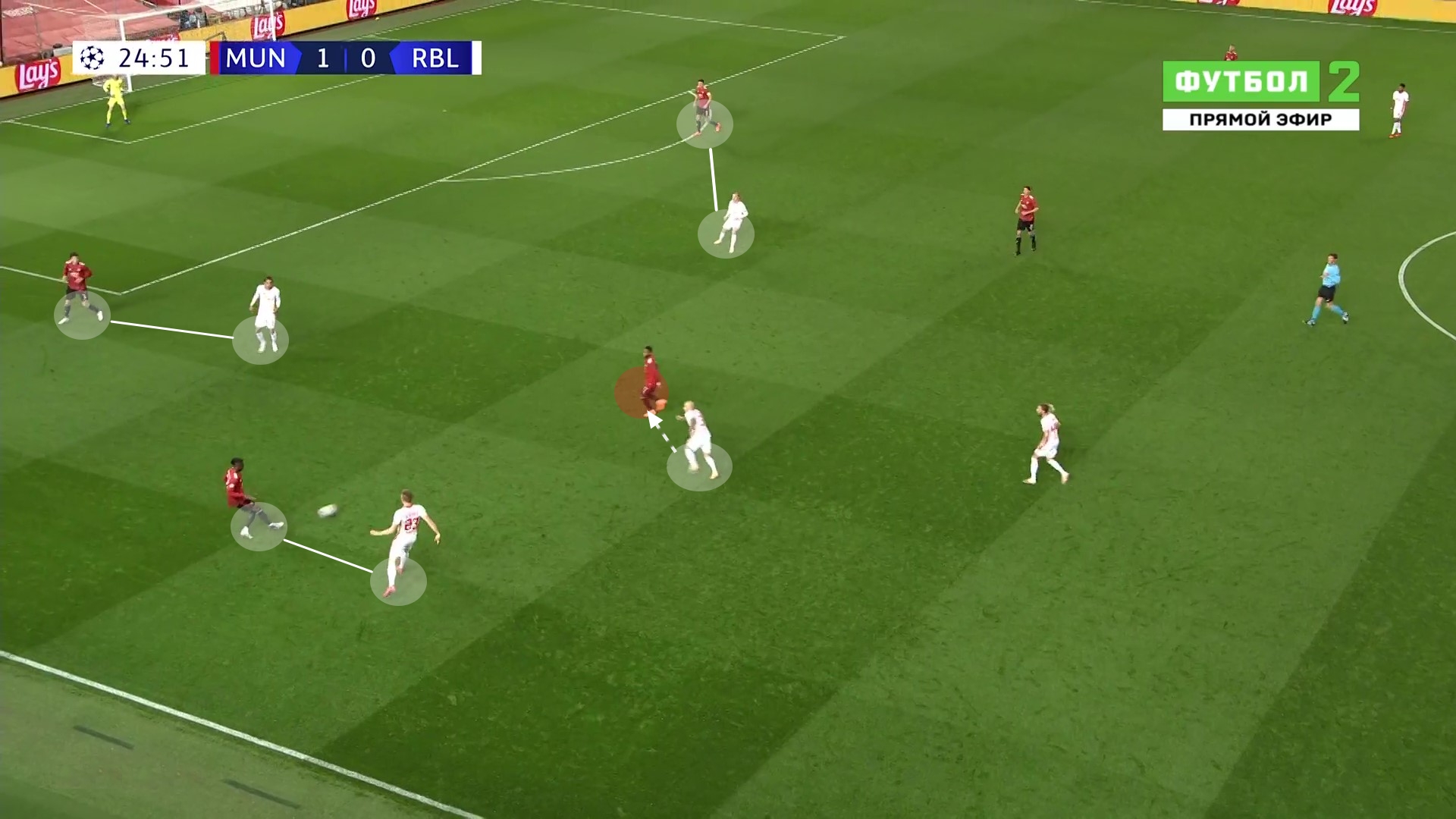 We can see how Wan-Bissaka is closed down and has only one option to play towards Fred. Fred is slightly open because Angeliño allowed him that space in order to trap him when he receives the ball.

In the frame below Angeliño puts pressure on Fred aggressively attacking him from behind and succeeds to tip the ball out from Fred’s feet towards his teammate who is positioned in the dangerous area. Angeliño’s quality pressing produced promising situation for his team. 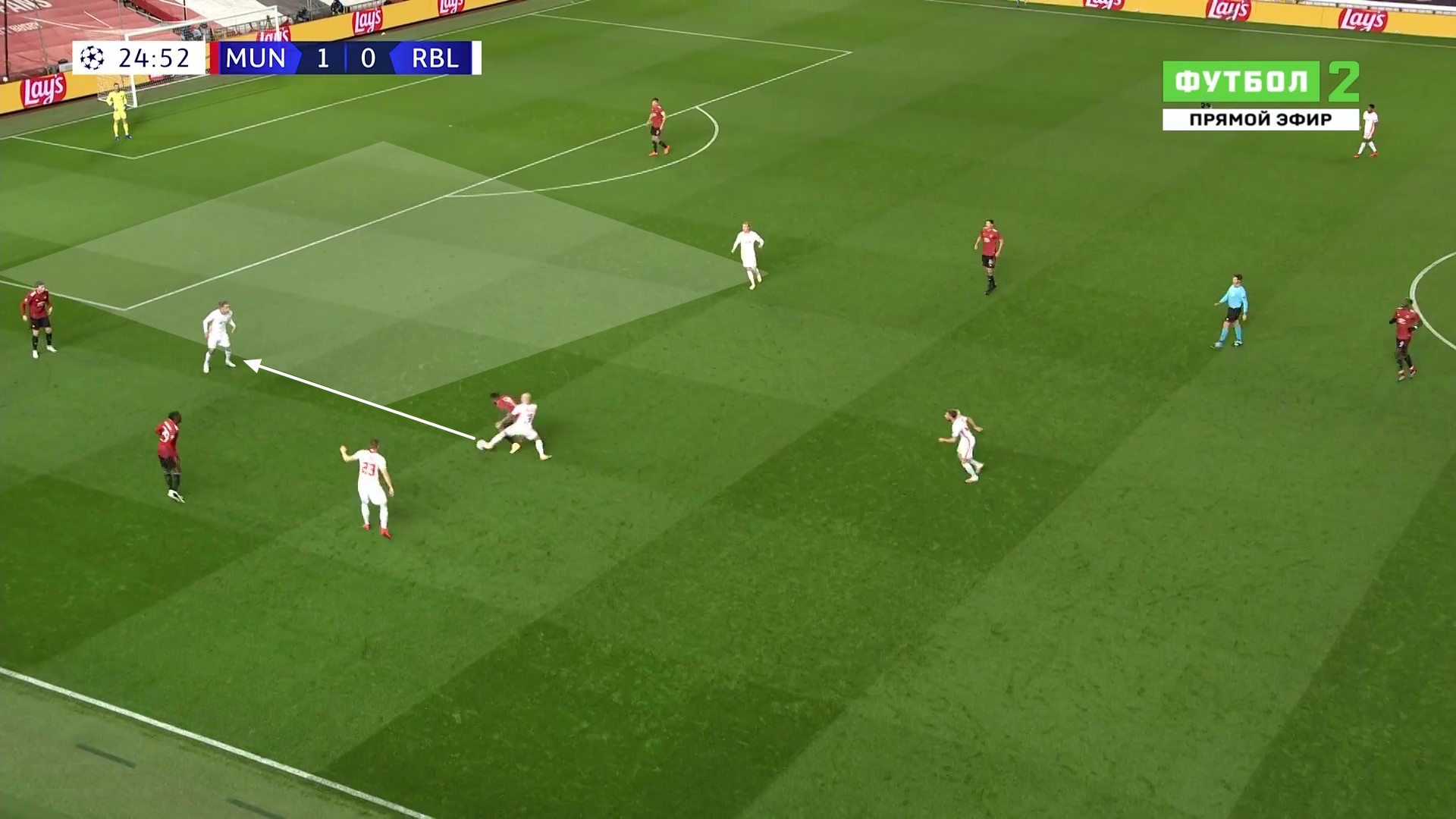 After mentioning Angeliño’s qualities we will now mention some weaknesses. Given his 171 cm height, he can be a liability when defending the far post. Teams who have higher wingers could exploit that, but in formations with three centre-backs he shouldn’t be exposed much in those situations, given one extra centre-back would cover space closer to him. What Angeliño could work on is decision making because sometimes he tends to shoot even when he has better options and also sometimes his attacking positioning can endanger his team because he is too far to prevent counter-attack.

This analysis gave us information on Angeliño’s capabilities. It is certain that current RB Leipzig tactical philosophy gets out the best from Angeliño in the attacking phase. This season he became a standard part of starting XI which surely helped him to perform well this season so far. He has high potential and still a lot of room to improve and given the shortage of quality left-footed full-backs he could be one of the leading players on that position in the years to come.