Milan travelled to France following their win against Napoli in Serie A for their fourth Europa League matchday against Lille who are actually second in Ligue 1 and the game ended with a 1-1 draw that kept the standings as they were with Lille first and Milan second of group H.

This result was not what both teams wanted but it was also acceptable for both of them since it kept their qualification chances high. And even though the result served Lille more than Milan, the visitors also will most probably have no real big difficulties in qualification since their remaining matches will be against less dangerous teams compared to Lille. But as everyone knows, nothing is guaranteed in advance in football.

In this tactical analysis article, I will break down both teams’ tactics while carrying out an analysis of Milan’s build-up plan and attacking strengths and weaknesses as well as Lille’s attacking performance in this match.

Lille started this match with a 4-4-2 formation which included Mike Maignan as a goalkeeper, Jérémy Pied as a right-back, José Fonte and Sven Botman as centre-backs, and Reinildo Mandava as a left-back.

In midfield, Christophe Galtier relied on Xeka and Benjamin André as central midfielders in the absence of the excellent Renato Sanches, Jonathan Bamba on the left-wing and Luiz Araújo as a right-winger and in front of them played Yusuf Yazıcı and Jonathan David.

For Milan, in the absence of the coach Stefano Pioli and his assistant, Daniele Bonera started this game with a 4-2-3-1 formation. Gianluigi Donnarumma played as a goalkeeper, and in front of him, Simon Kjær and Matteo Gabbia formed the defensive line with Diogo Dalot on the right flank and Theo Hernández as a left-back.

The midfield was formed of Ismaël Bennacer and Sandro Tonali and in front of them, Samu Castillejo played on the right-wing, Hakan Çalhanoğlu as an advanced playmaker and Jens Petter Hauge as a left-winger while the team’s striker was Ante Rebić due to the absence of Zlatan Ibrahimović. 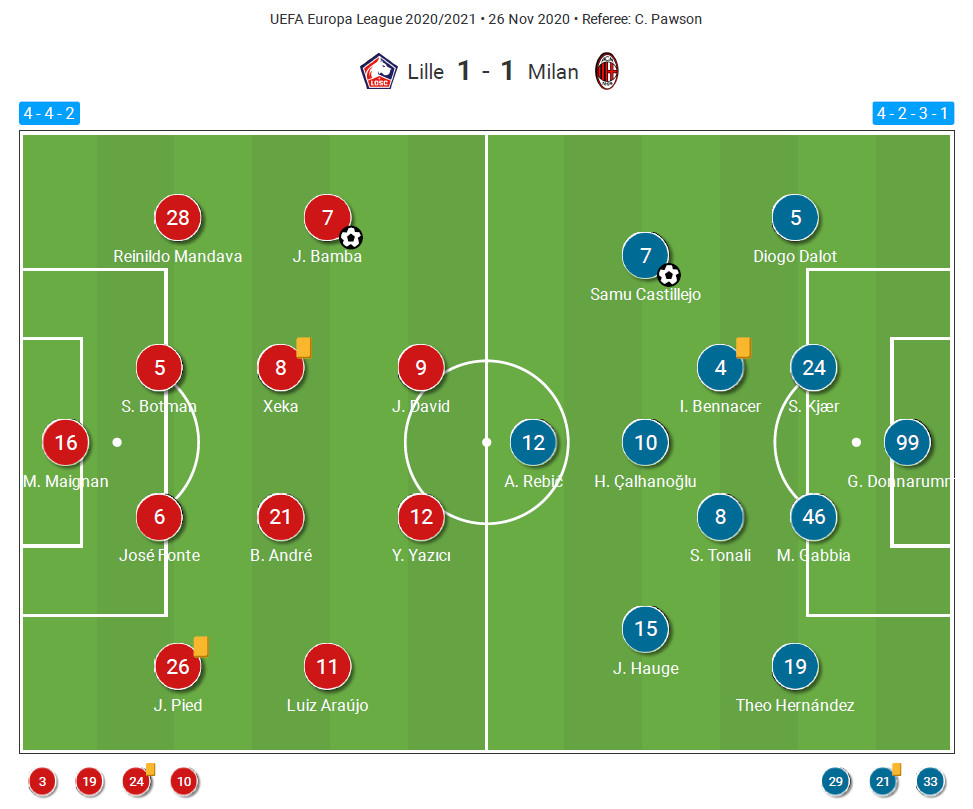 Milan started this match with a different mentality compared to the first match between the two teams at San Siro. They knew the danger of attacking with many players and leaving space behind against a team that deals perfectly with counter-attacks and has quick and technical players.

And therefore, throughout the match, we often saw Milan either having the possession of the ball and trying to find ways to reach the penalty area or defending against Lille’s attack, but without playing with the high defensive block and more importantly, without including both full-backs in the attacks.

And in this regard, Milan played with three defenders at the back who were Gabbia and Kjær and Dalot joined them as a third centre-back when in possession instead of playing on the right flank. This was done to allow Hernández to advance and provide more options on the left-wing and enable Hauge to move closer to Rebić in the final third. 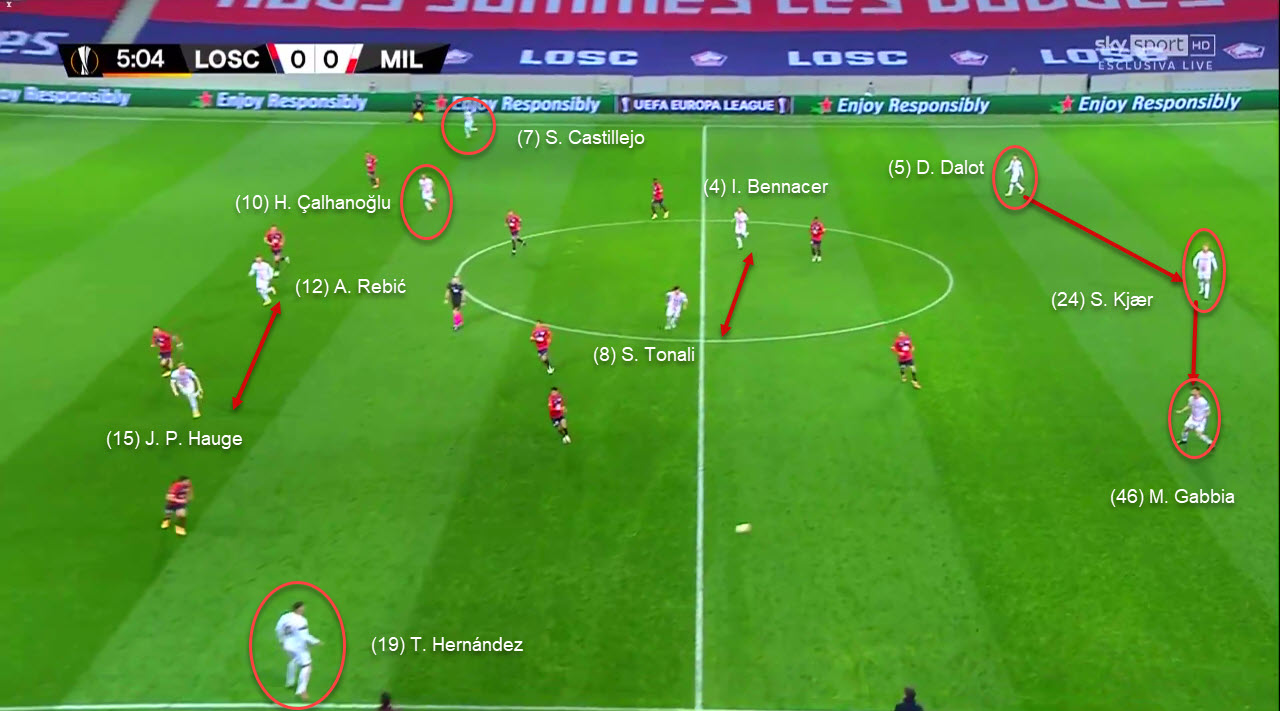 As you can see in the above picture, Milan used this system against Lille to be more compact at the back and to make up for the absence of Ibrahimović as well. How? Milan relied heavily on the Swedish when there were no unmarked players in the final third, and given his great efficiency in aerial duels, most crosses were played to him and then he passed the ball to his teammates.

And without his presence, Milan opted for making Hernández advance and give options in the place of Hauge, while the latter remained close to Rebić to create numerical superiority when facing Lille’s defenders and making Rebić have more free space.

Moreover, and even though Çalhanoğlu did not have an excellent game, he moved between the lines so often to link not only midfield and attack but also between the wingers Hauge/Castillejo and Rebić. And that’s why we saw him move a lot towards the right-wing and the left-wing since he also couldn’t get a lot of passes in the middle due to Lille’s organised marking.

The first-half witnessed a few chances from both sides that could have made the game more intense, and for Milan, the most notable one was Hauge’s chance which is shown below. This action started from Çalhanoğlu who saw Hauge being unmarked and gave him a through ball to start a counter-attack.

However, the Norwegian failed to make the right decision at the right time and wasn’t able to pass the ball to Rebić or Hernández who were both waiting right in front of the goal. Nevertheless, Hauge did make a good impact on the course of the game later on and disturbed Lille’s defenders with his pace and physical strength, and with time, he will become a more fundamental player for the team. 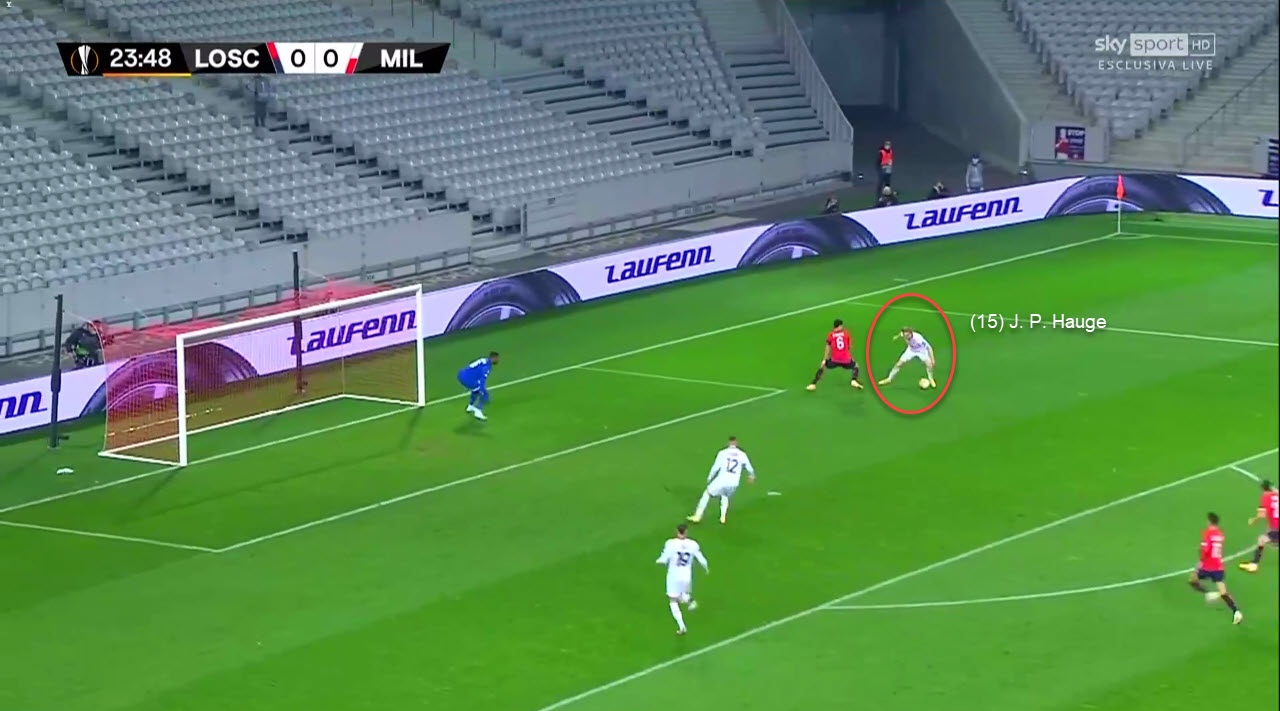 Moreover, there were many situations in which Milan could have had clear scoring chances but the chemistry between Hauge and Rebić was not really apparent, and this was also due to Rebić not being at his 100% yet after getting back from injury.

And therefore, we saw many chances that could have been exploited in a better way. For instance, as you can see below, in this action Rebić preferred to cut inside to his right as the red arrow shows, and he did not notice Hauge’s movement and wasn’t aware that just a through pass could have offered the latter a one on one situation with the goalkeeper. 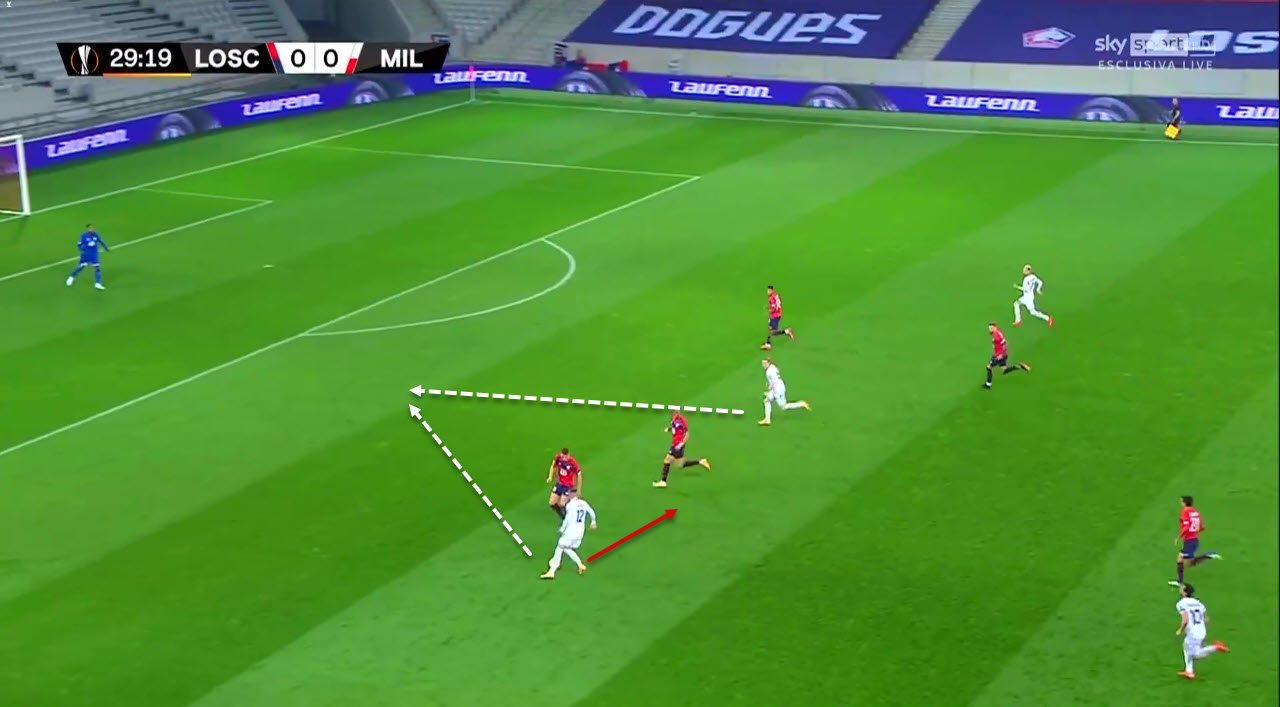 For Lille, the team played continuously with the 4-4-2 formation and relied on the fast short passes between midfielders and wingers as they relied a lot on Bamba and Araújo who was very dangerous during this match. And he threatened Donnarumma several times and was able to create space for himself to shoot even in unpredicted and difficult situations like the one shown below.

In this action, he was surrounded by players and there was no clear shooting trajectory in front of him and yet he was able to shoot the ball with the internal part of his foot. And even though his curved shot was saved at the last second by Milan’s goalkeeper, it should be said that Araújo created a lot of problems to Milan’s defence and they were not able to stop him thanks to his technical abilities and intelligent movements. 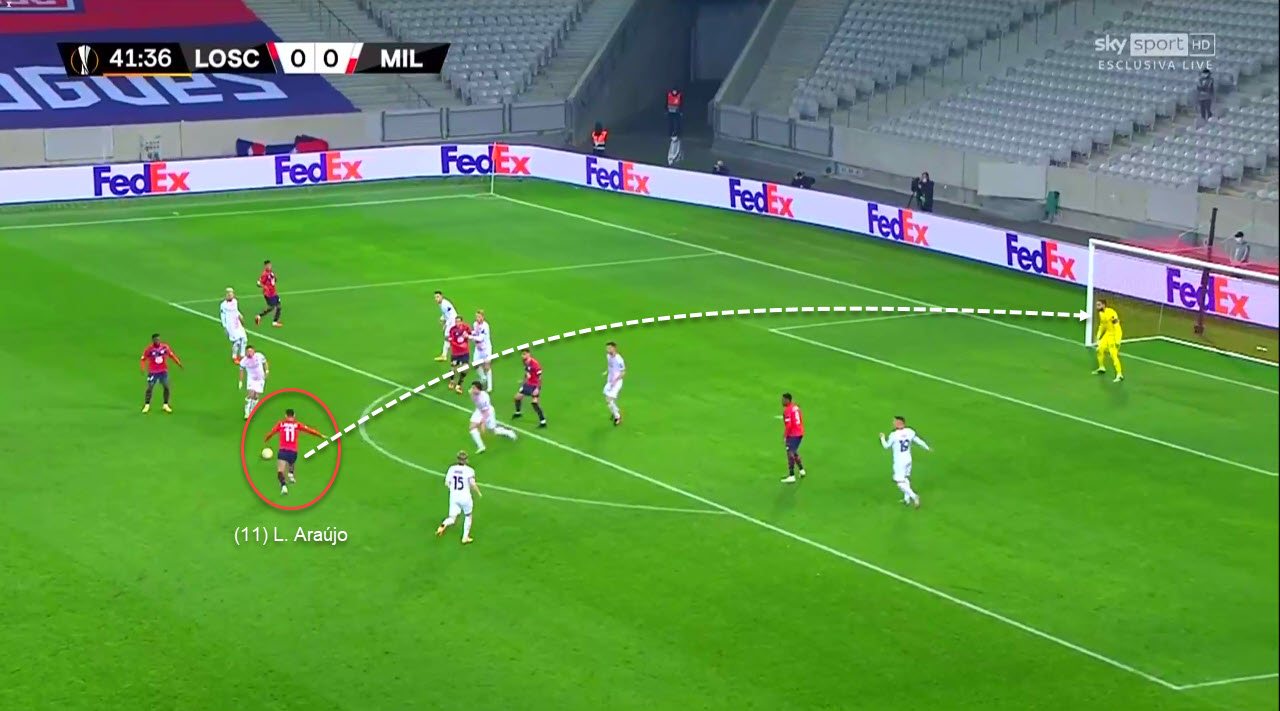 At the start of the second half, Milan were able to score their goal thanks to a well-played counter-attack after Lille lost the ball in midfield. And here appears Lille’s mistake which Milan also made during the first match with Lille, which was attacking with many players and leaving only few at the back with a high defensive line. Playing with such a system against teams who are excellent in counter-attacks would certainly result in goals. And this was what happened during this action.

Tonali’s through pass was intelligent and the quickness with which he made the decision and execution of doing it made the action even more excellent as it gave no time for Lille players to recover. And when Rebić got the ball in that perfect situation after going past his marker Botman, he passed it to Castillejo who scored easily. 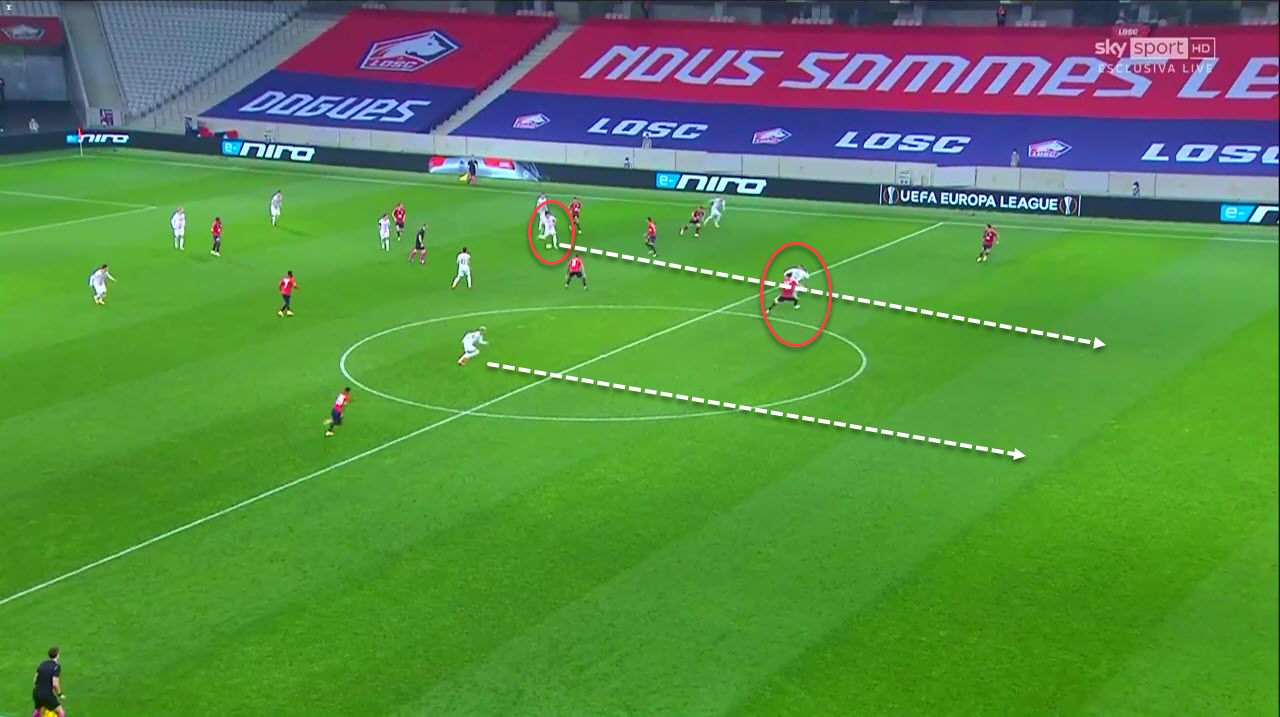 And in the 64th minute, Lille equalised with a goal that came thanks to their high pressing on Milan’s defenders and goalkeeper when they knew that they could get Milan in trouble by putting them in these situations. And that’s what happened when Gabbia was obliged to pass the ball rapidly to his teammate but gave away a throw-in instead. And then with only four touches from four Lille players, namely Jonathan Ikoné, Araújo, David and Bamba, they were able to score a beautiful goal with Bamba’s finish while Milan’s players were lost and couldn’t intercept the action. 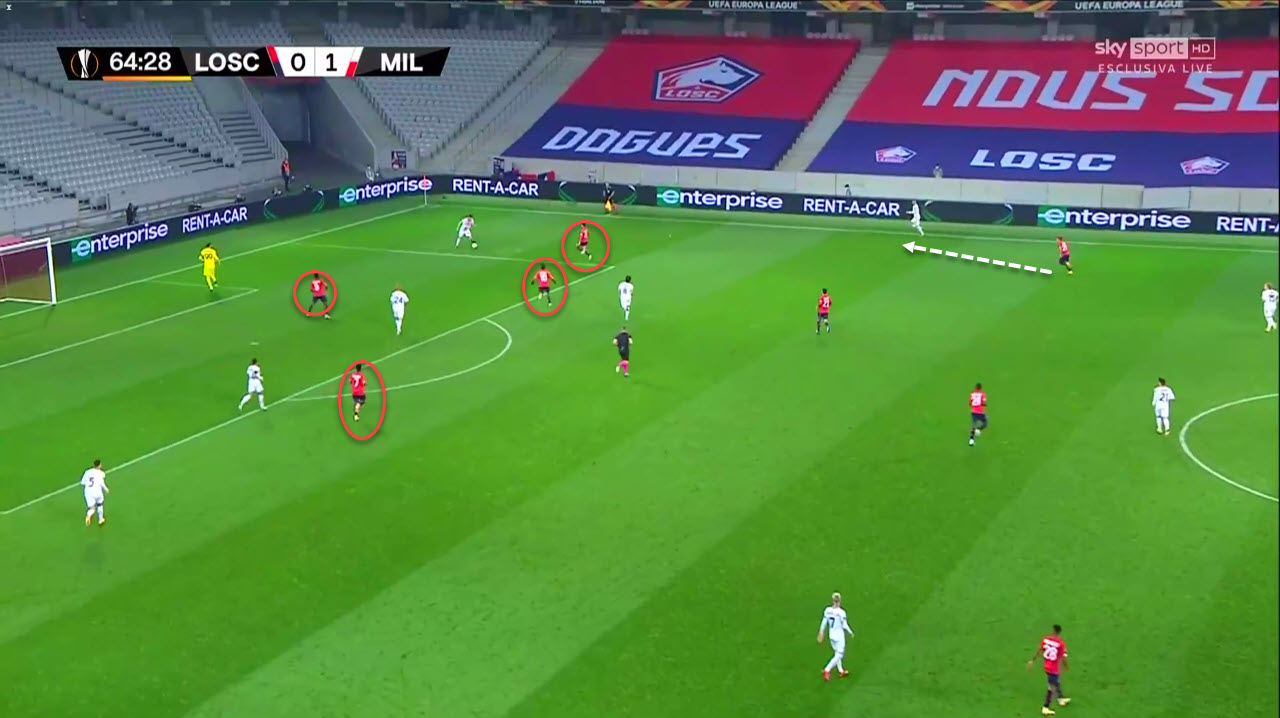 This match was difficult for both teams and especially for Milan who played without some of their main weapons, Ibrahimović, Rafael Leão and Alexis Saelemaekers and Kessié who was being rested. But overall, Milan played a solid game and passed another step towards qualification and will now look forward to win their next Serie A match against Fiorentina to remain at the top of the league’s standings.

Lille also showed once again that they deserve the second spot in Ligue 1 and that they are now at a Champions League level since they beat Milan 0-3 at San Siro and prevented them from winning at Stade Pierre-Mauroy as well. And being at the head of this group will now enable them to focus more on their domestic league fixtures with more determination and focus while having the confidence of doing well in Europa League as well.