The second of Chelsea’s game against Rennes was played out on Tuesday but was in no part a walkover for the English side. The Blues battled to a lacklustre win thanks to a stoppage-time goal as the game was a constant battle for control with Rennes slowly getting better as the match wore on. We will look at how Chelsea managed to take three points and confirm qualification to the round of 16 being the first team to do so.

This tactical analysis will detail the tactics used by both Rennes and Chelsea in this UEFA Champions League tie.

The home side made a couple of changes since their last meeting with against Chelsea. For Rennes, Dalbert was suspended following his sending-off at Stamford Bridge, while the highly-rated 18-year-old Eduardo Camavinga started in midfield.

For Chelsea, there were four changes from their Premier League game against Newcastle with Thiago Silva, Jorginho, Cesar Azpilicueta, and Callum Hudson-Odoi all starting. N’Golo Kanté, Reece James, Hakim Ziyech, and Antonio Rudiger were rested given the crucial upcoming clash against Tottenham Hotspur on Sunday. 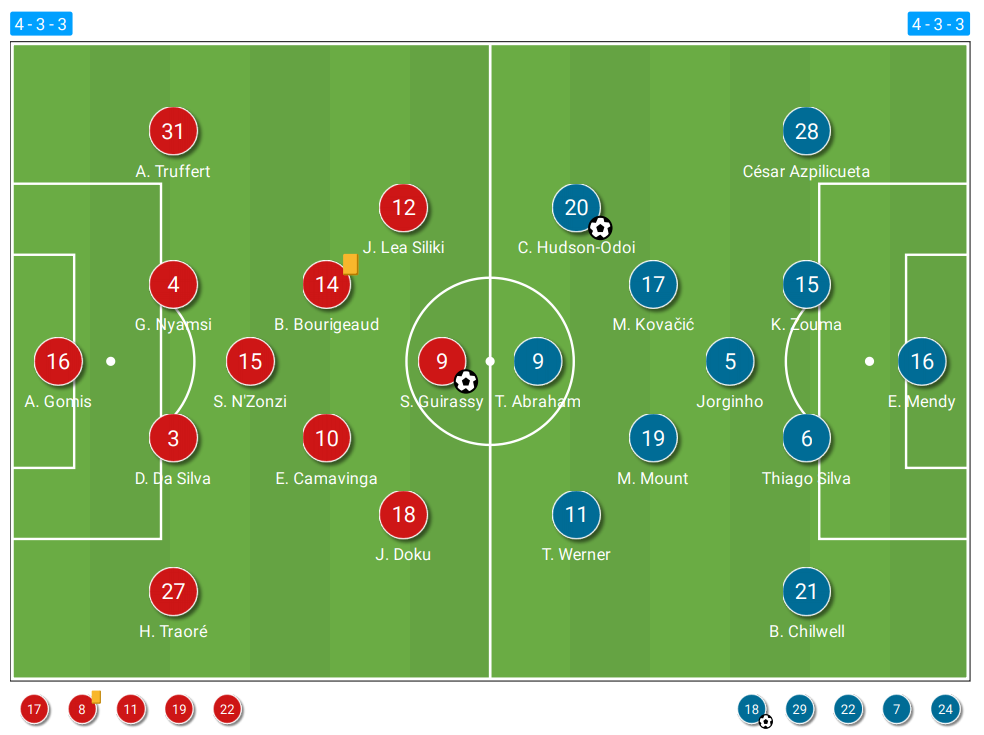 Chelsea were the dominant side for the opening 30 minutes where they were created a few goal-scoring chances whilst using familiar tactics. They set up in a 4-3-3 system that provided both protection to the back four but also allowed them numbers going forward. Playing Mason Mount and Mateo Kovačić gave Chelsea drive from midfield given their excellent ball skills and off-the-ball running. Jorginho was used as the side’s main creative outlet whose main job was to progress the ball forward and find openings for the wide players.

Chelsea had a balance on both sides with Azpilicueta as a more reserved full-back partnered with the more attacking Hudson-Odoi who can drift wide or come inside. On the other side, Timo Werner was used as an inside-forward with Ben Chilwell providing width. 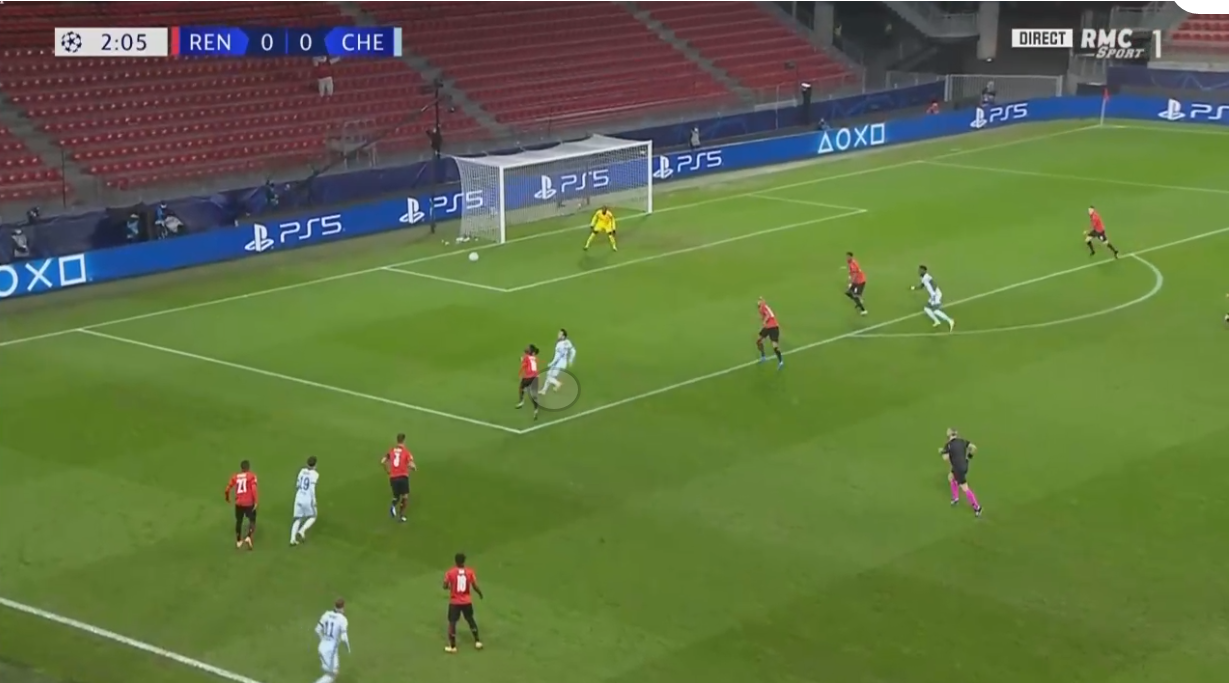 Early on we saw Chelsea at their attacking best with Chilwell making runs in behind the full-back through a combination of the left-winger and central midfielder. As the image above shows, Chilwell collects a pass from Werner in the 18-yard box. This advanced position is where Frank Lampard wants his full-backs to play creating overloads and combinations which Rennes were unable to stop.

Chelsea’s attacking shape resembled a 2-4-4 with two full-backs pushed up, overrunning Rennes in midfield. One of the better chances came from another wide combination, this time between Hudson-Odoi and Azpilicueta where the English winger was able to make a quick run in behind and deliver a cross for Werner. 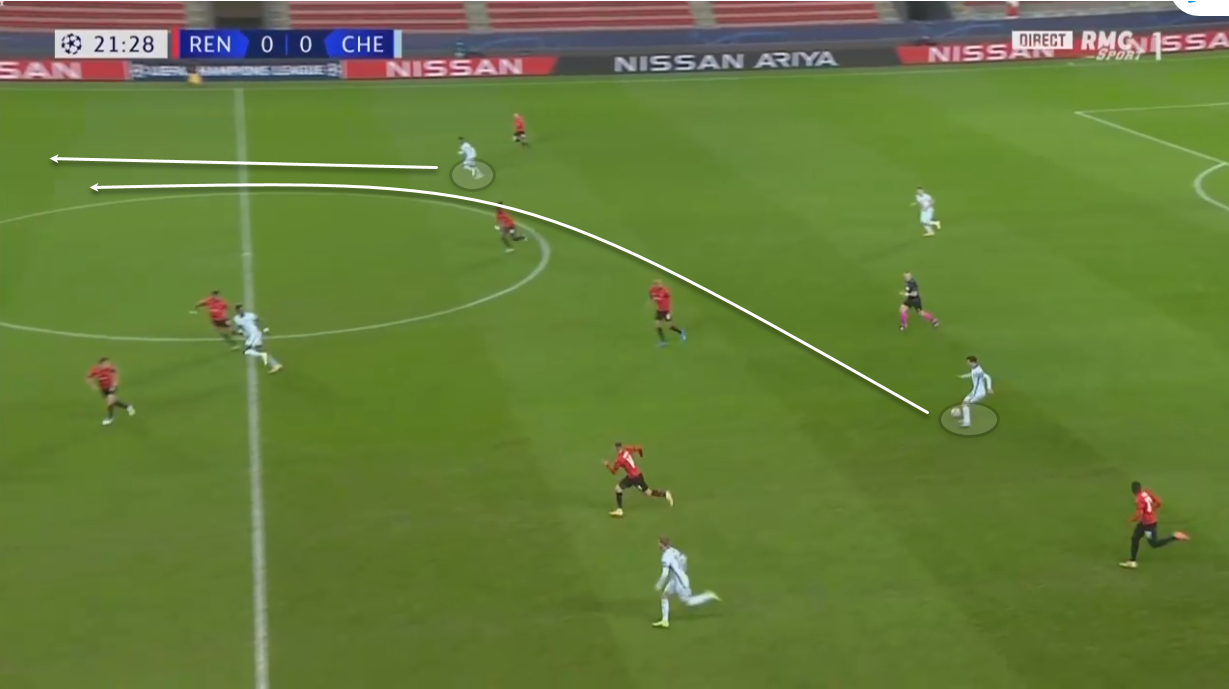 Unsurprisingly, Chelsea’s opening goal came from the wide areas through a Hudson-Odoi run down the right channel. After dispossessing Rennes in their own half, Chelsea managed to transition into the opposing half through one long pass by Mount which set Hudson-Odoi away. The Rennes full-back was caught out and couldn’t match the winger for pace.

As the image above illustrates, Rennes had committed some players forward but the far side was unprotected. The pass from Mount is one Chelsea have used extensively before with Jorginho often using this pass. Hudson-Odoi controlled the ball and dribbled through to score.

Chelsea were not at their attacking best in this game, and it showed in their lack of creativity and ultimately control in the second half. This was on display when Werner, Tammy Abraham, and Hudson-Odoi were all isolated and spent a lot of time in their own half defending. This was down to a lack of creativity which is normally provided by Ziyech and James. The creative void was not filled in properly and Chelsea’s winning goal came from Kanté and Kai Havertz pressing Rennes in midfield and Ziyech playing in Werner. It was this move that eventually created Olivier Giroud’s goal-scoring chance. 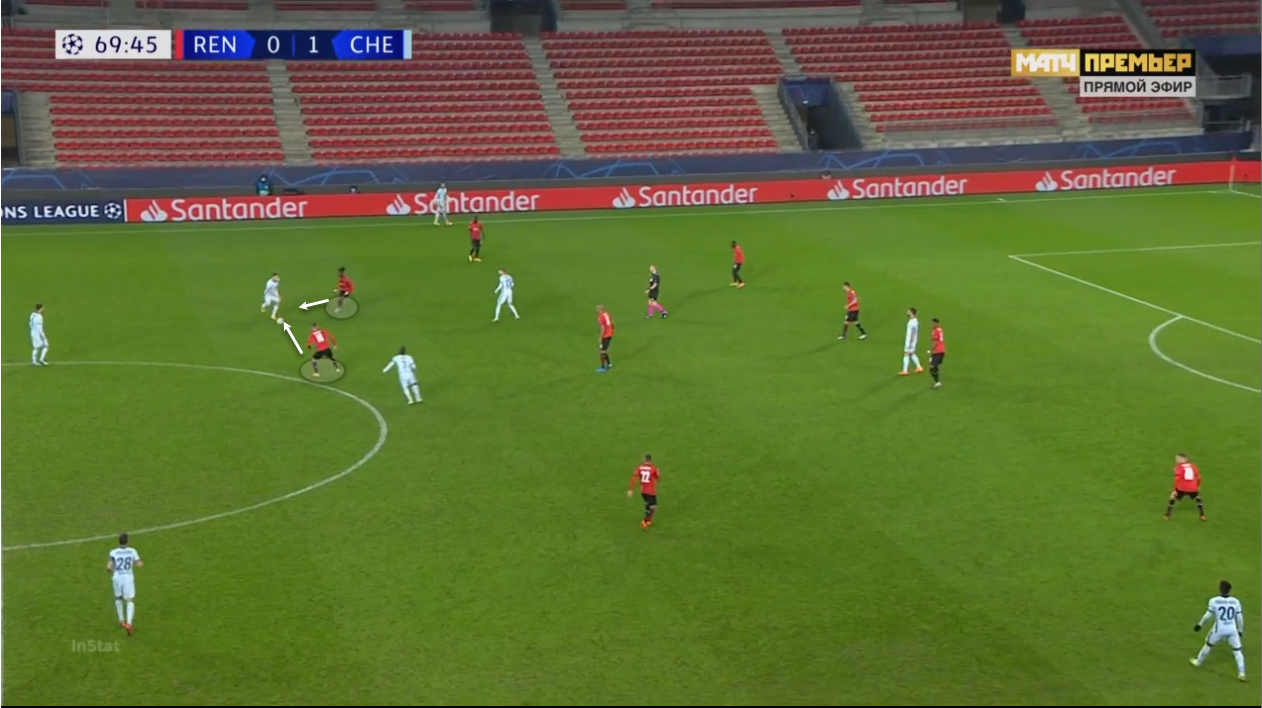 If we look at the image above, we can see Rennes keeping a compact shape but most importantly, Chelsea’s forwards and midfield are isolated. There are no midfield runners to take advantage of the gaps because all three players – Giroud, Werner, and Hudson-Odoi, all prefer the ball to feet. The departure of Mount meant Chelsea had more ball control but lost some off-the-ball running. Mount and Havertz would usually take advantage of the space we can see in between the lines and with neither on the field at that point, it meant Chelsea lacked a runner. Rennes were able to block easy passing lanes and held their man-marking plan even here.

From a defensive perspective, Rennes were not able to cope with Chelsea’s quick transitions and overload style of play. The French team were playing with a low-block using a compact 4-1-4-1 shape. Julian Stephan opted to keep the spaces between the lines smaller so Chelsea would be denied space in the central and half-spaces. The presence of the sole pivot gives Rennes the flexibility to cover more space horizontally in defence or midfield, however, given how quick Chelsea were playing in midfield and moving the ball across, Chelsea were isolating the Rennes defenders and overloading the spaces. 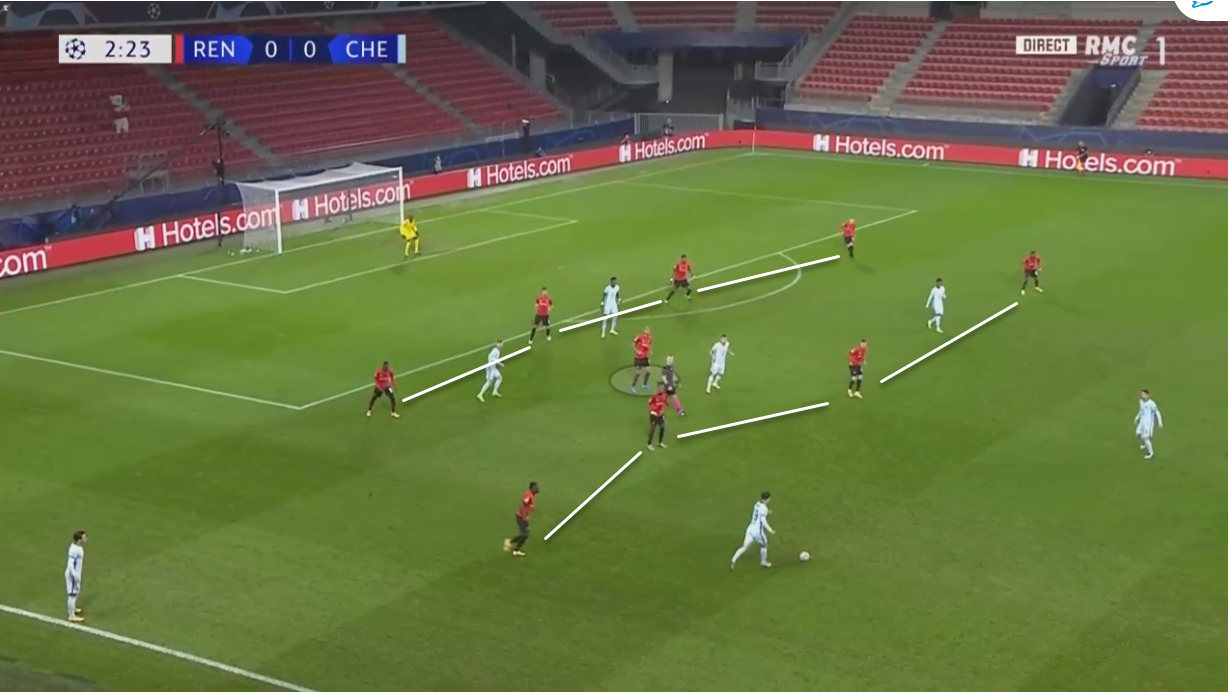 The image above shows Rennes playing in their 4-1-4-1 formation early on where they condensed the space between the lines, forcing Chelsea to find alternate options forward. You can see how high Chilwell is on the left but given the extra man in midfield, Rennes’ plan was to use him, in this case, N’Zonzi, to match them. This is where the single-pivot becomes useful. Their defensive tactics were a lot more visible as they settled into the game. Rennes adopted a man to man pressing approach where the pressing triggered in midfield. The attackers applied pressure on Chelsea’s defenders which at times forced them to play it into midfield. Any time the ball dropped to one of the Chelsea midfielders, Rennes would be triggered into an aggressive press. 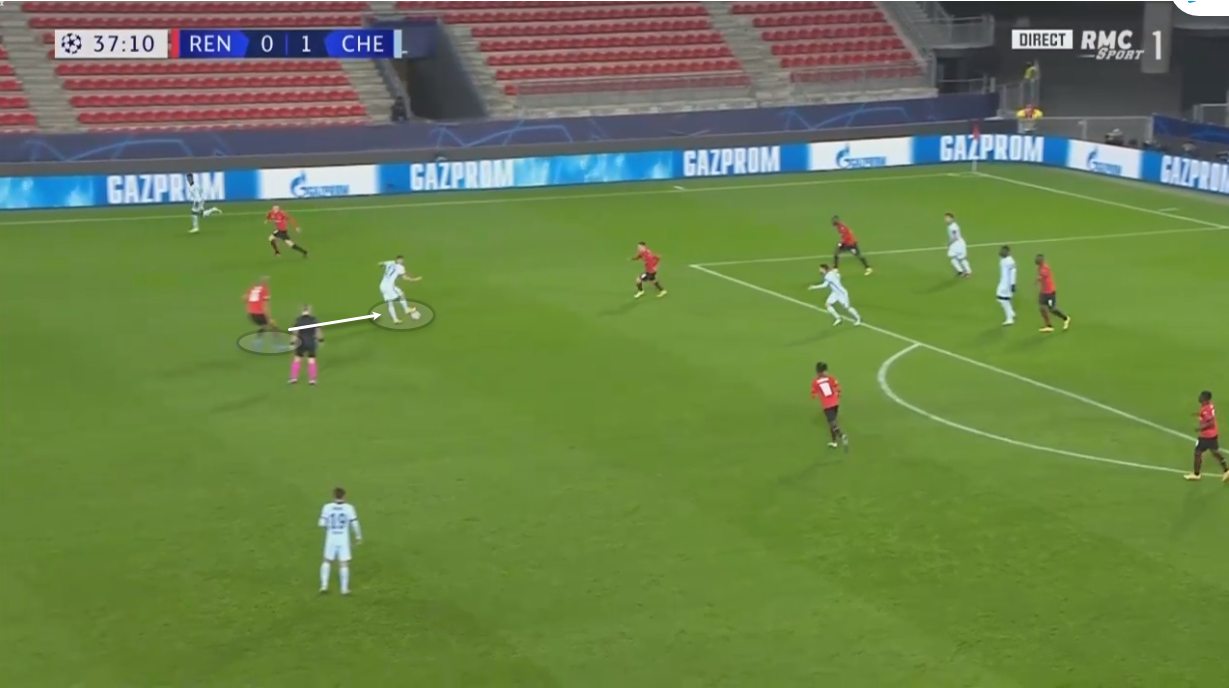 As this image shows, Chelsea try to play out from the back but when Kovačić receives the ball, N’Zonzi immediately closes in to apply pressure. The next pass went up to Abraham who was also closed down by a Rennes defender. This had a compounding effect on Rennes’ strategy in going forward by adopting a higher press, knowing that Chelsea were getting slightly vulnerable at the back. The absence of Kanté meant they only had to deal with Mount who was Chelsea’s most effective presser. Closing down Silva and Kurt Zouma meant Mendy was forced to go long into midfield where Rennes’ midfielders could win the aerial duels. 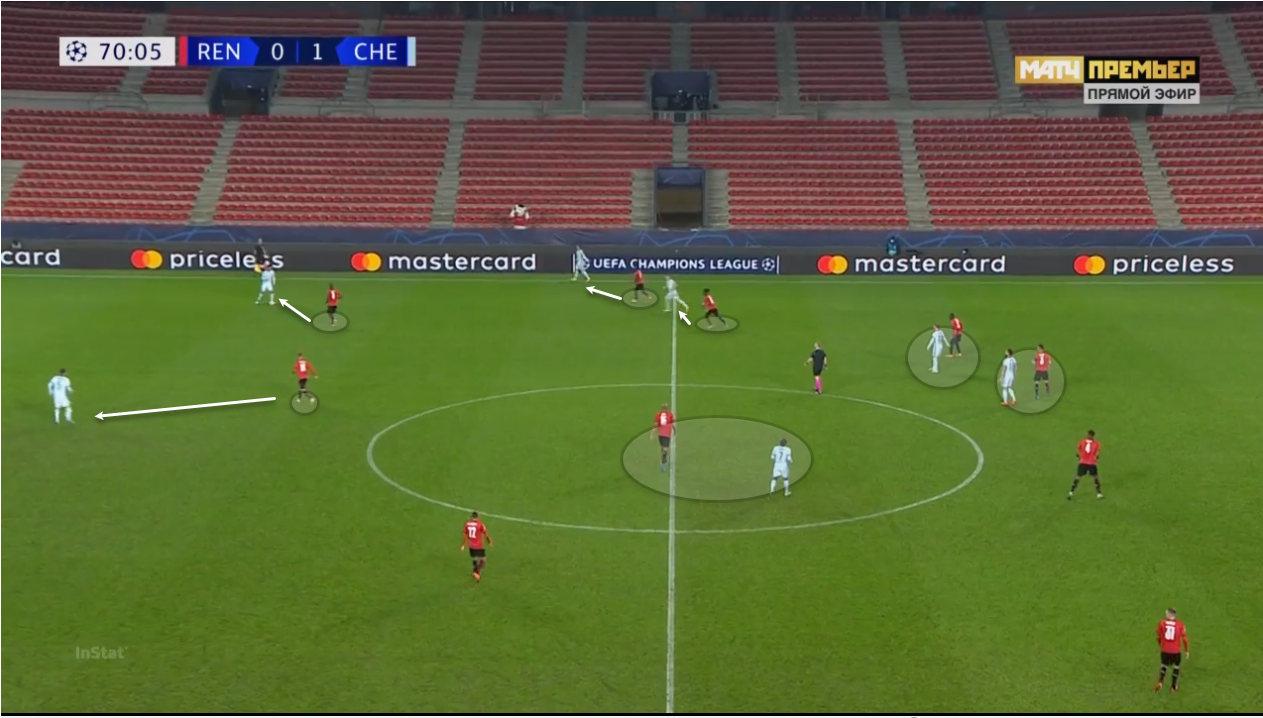 Both teams started players to provide both a defensive and offensive balance and it was in midfield where the two were going to find the key to victory. Chelsea started well and dominated possession but were pinned back after the first 25 minutes. One of the keys to Rennes’ resurgence was the passing and composure of the midfield trio of Benjamin Bourigeaud, Cavaminga, and N’Zonzi. 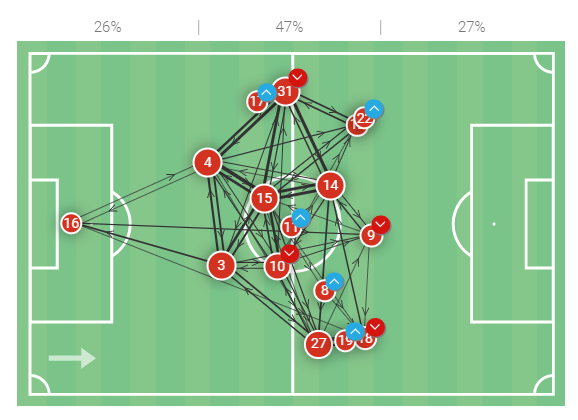 The three rotated and gave Rennes a platform to build out from and support the attacking players. Their initial plan was to take advantage of the space in behind Chelsea’s forward-thinking full-backs, especially Chilwell. Jeremy Doku and James Léa Siliki are electrifying wingers who have the pace and trickery to cause Chelsea problems.

The above pass map is an indication of the Rennes players’ average position on the pitch, where you can see how wide they wanted to play whilst keeping it compact in midfield. Chelsea were pushing forward initially, but they were pegged back because of the control from Cavaminga and N’Zonzi who then supported Doku and Léa Siliki. The two wingers were key to Rennes’ attacking hopes from open play. 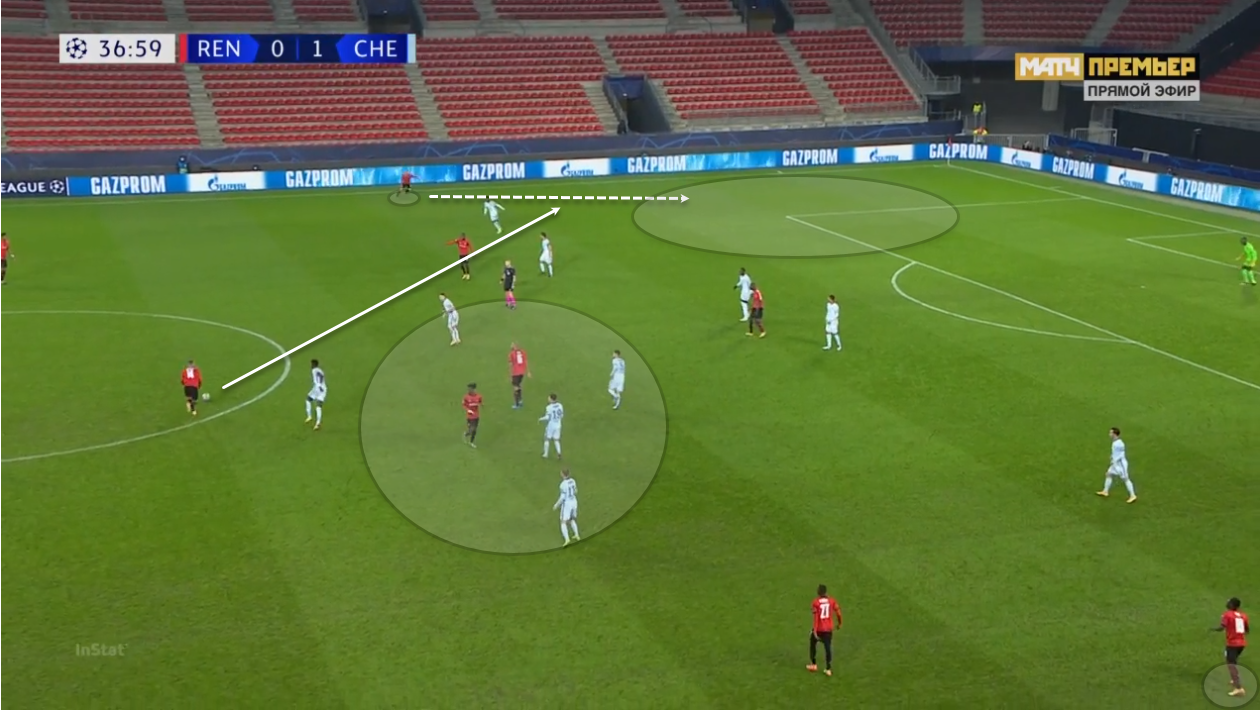 This troubled Chelsea more as the game wore on because Rennes held more possession. Mount is the best off-the-ball presser in that midfield set-up and the absence of Kanté meant Chelsea lacked a pure ‘seek and destroy’ midfielder. As you can see in the image above, Bourigeaud, N’Zonzi, and Cavaminga are centrally positioned which forces Chelsea to defend more narrow. You can see Rennes’ two wide players stationed outside of Chelsea’s wide players and were trying to use this method of build-up and attack. The Blues opted for a 4-5-1 out of possession to pack the midfield with numbers and stop the French side.

Usually when Kanté and Mount play together, teams are under a lot more pressure and it gives Chelsea good press in midfield. Rennes opted for a higher press late in the game as they wanted to block the easy passing lanes to the full-backs, forcing Edouard Mendy to go long which allowed the bigger Rennes midfielders to win the duels against Chelsea. Chelsea became more active in midfield when Kanté came on where he injected pace and press.

Their main threat came from set-pieces where Rennes were constantly testing Chelsea’s defenders. Serhou Guirassy was a nuisance throughout the game and his physicality caused some problems. One moment of a defensive lapse in a set-play allowed Rennes back in the game which was deserved on the basis of their second-half performance.

This analysis showed that Chelsea weren’t at their best but with a slightly rotated team, they were able to grind out a victory against a resilient and resurgent Rennes team. They have qualified for the knockout rounds and the next two game weeks will present an opportunity to rotate more ahead of a busy schedule. Rennes will take heart from their first UEFA Champions League campaign and will look to secure Europa League football.