Real Madrid came crashing out of the Champions League midweek, missing the chance to face Premier League champions elect Manchester City in the final with their comprehensive loss to Chelsea at Stamford Bridge. However, they had to recover quickly in the La Liga, with the title still up for grabs and with Barcelona and Atlético Madrid playing out a goalless draw, and three points would lift Real Madrid to the top of the table. However, they faced a fellow challenger in Sevilla who by no means were willing to give up the hope of snatching a first title since 1946 and the tie was bound to be exciting, with Julen Lopetegui returning to face the club that so unceremoniously dismissed him after less than four months in charge. In this tactical analysis, we look at the tactics of both Real Madrid and Sevilla from this fixture. 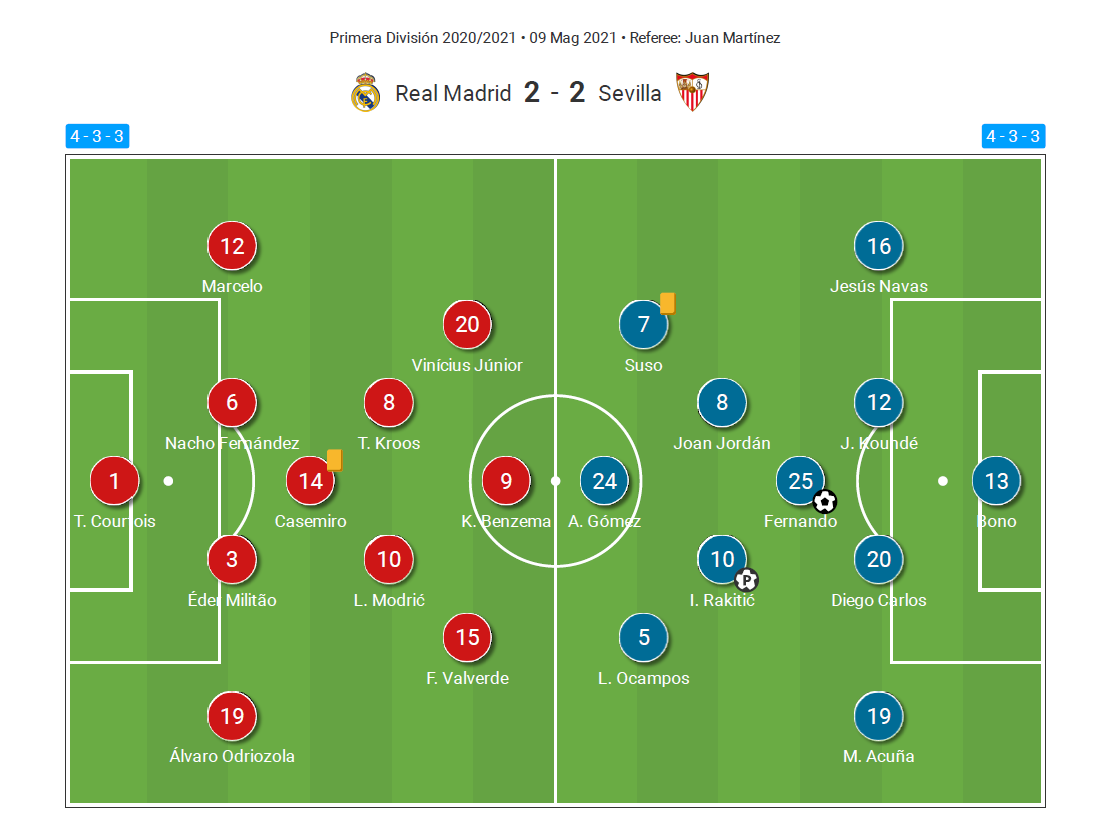 Real Madrid came into this fixture with a host of injuries among their backline, with Raphaël Varane, Dani Carvajal, Lucas Vázquez and captain Sergio Ramos deemed unfit to play. Éder Militão was in good form though and he paired up with Nacho at the back, with Marcelo and Álvaro Odriozola as the full-backs. The midfield remained the same trio of Casemiro, Toni Kroos and Luka Modrić with Vinícius Júnior, Karim Benzema and Federico Valverde as the front three. Of course, with Valverde in the side, the formation could easily shift to a 4-4-2 or 4-5-1 for him to drop to the midfield line with Vinícius also doing the same as well.

For the visitors, the backline consisted of Jesús Navas and Marcos Acuña as the full-backs with Jules Koundé and Diego Carlos as the center-backs. Joan Jordán, Fernando and Ivan Rakitić played in midfield with Suso, Alejandro Gómez and Lucas Ocampos making up the frontline. Gómez’s versatility has seen him play all across the attack and in this fixture, we could expect him to play a free role in attack as opposed to a classic forward. With the lineups covered, we move on to the analysis.

Sevilla use their full-backs to take control early 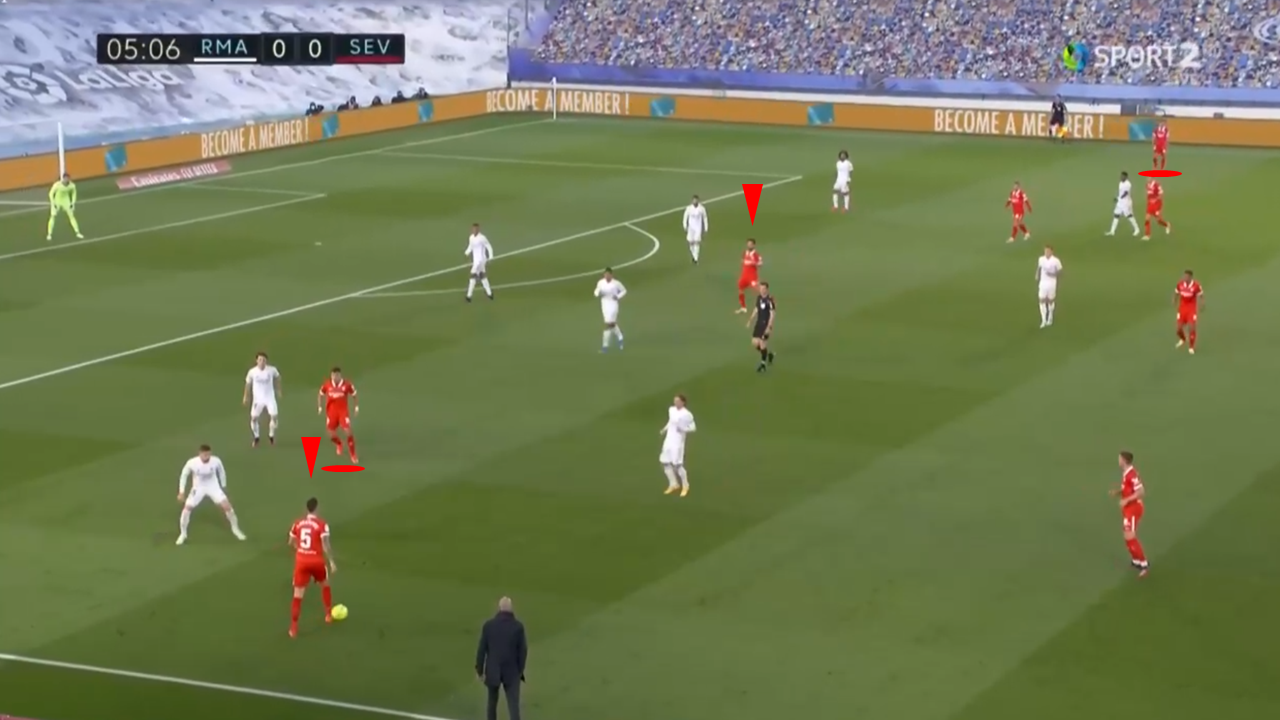 An interesting tactic used by Lopetegui was to allow Suso to play a free role in attack, joining in as a second striker or playing wider as a winger, while pushing Ocampos deeper as well. This was made possible owing to the very high positioning of Sevilla’s full-backs, who almost operated as wingers in possession. Acuña and Navas worked well with their respective wingers to either overlap or underlap them and progress much higher up the pitch, providing width in attack and allowing Gómez to seamlessly drift into pockets of space between the defenders. The Sevilla midfielders could also push up into these spaces and for much of the early stages, Sevilla looked like the team in charge.

They operated in what was pretty much a 2-3-5 formation but also ensured that the spaces behind the full-backs could be covered owing to the positioning of the midfielders and in particular, Ocampos. Where Navas could cross early and not progress too high up the pitch, Acuña was more effective further up and this meant that Ocampos almost had to operate as a left-back in case possession was lost. Hence, while Real Madrid where restricted to counters in the opening period, it did not prove to be very useful. This being said though, the side still managed to make one work, with Odriozola finding space down the flank and sending a cross into Benzema who headed past Bono but unfortunately for the hosts, it was disallowed for offside in the build-up. 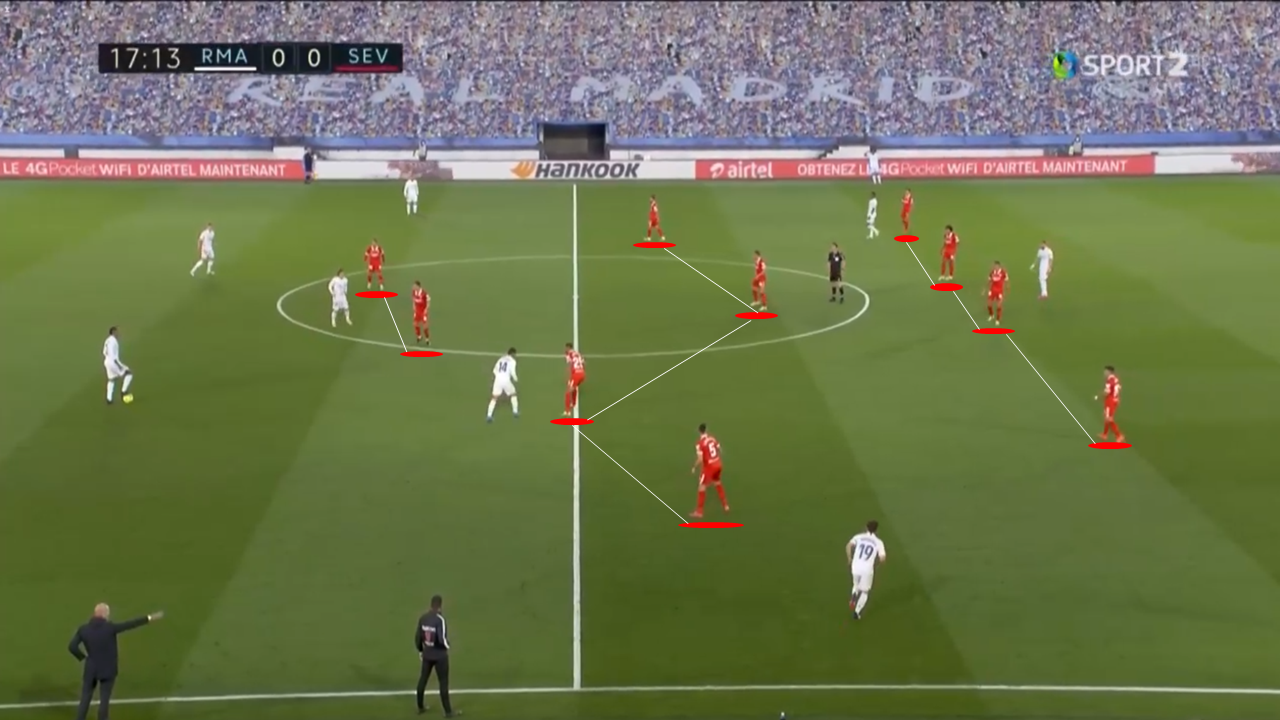 For the most part, though, Sevilla’s defense looked solid with the side settling into a compact 4-4-2 shape out of possession. They blocked off all the central spaces, forcing Madrid’s midfield trio further back and thus forcing their progression through the wings. Madrid were not able to carry the ball through to the central spaces and had to rely on passes to the flanks to try and progress down the touchline but Sevilla were easily able to stop these attacks. The likes of Modrić and Kroos could not dictate the play as much as they would have liked and this heavily affected the attack, with Valverde and Vinícius not able to consistently take on their defenders and beat them as well.

Hence, Sevilla could take control and especially with their full-back tactics, were causing problems for the Madrid defence who simply could not keep up with their passing and movement in this first half. Eventually, a foul led to an excellently worked free-kick that saw Sevilla score the opener. 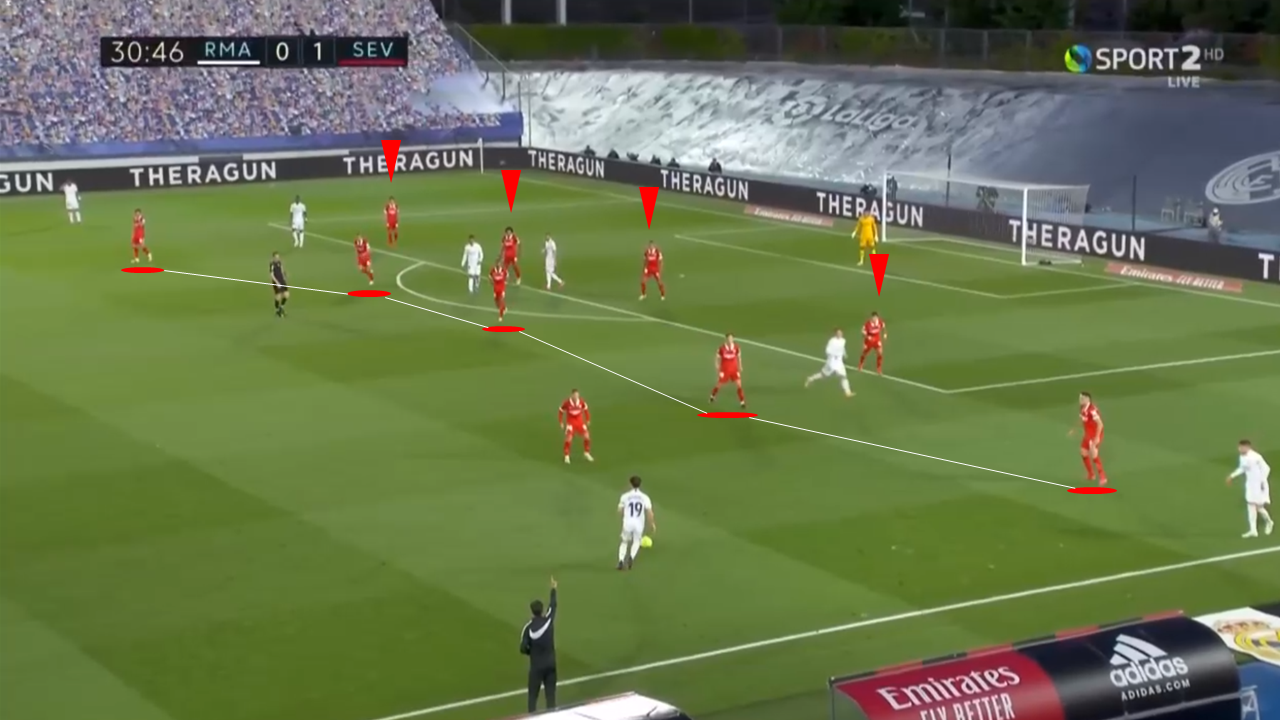 The goal spurred Zidane’s side into action, realising that their La Liga title hopes were on the line. They were better on the ball and looked to increase the tempo of their passing, holding the ball for longer periods of time and looking to create proper attacks. This forced Sevilla well back, into a 4-5-1 with Suso and Ocampos ready to drop even deeper to stop any Madrid attacks down the wing. There was virtually no space between the lines for Madrid to exploit still and while they were working themselves back into the game and starting to take control, they could not create the chances that they wanted to. Reduced to shots from distance and no clear-cut chances, they went back to the dressing room after the first half looking frustrated with nothing to show as of yet. 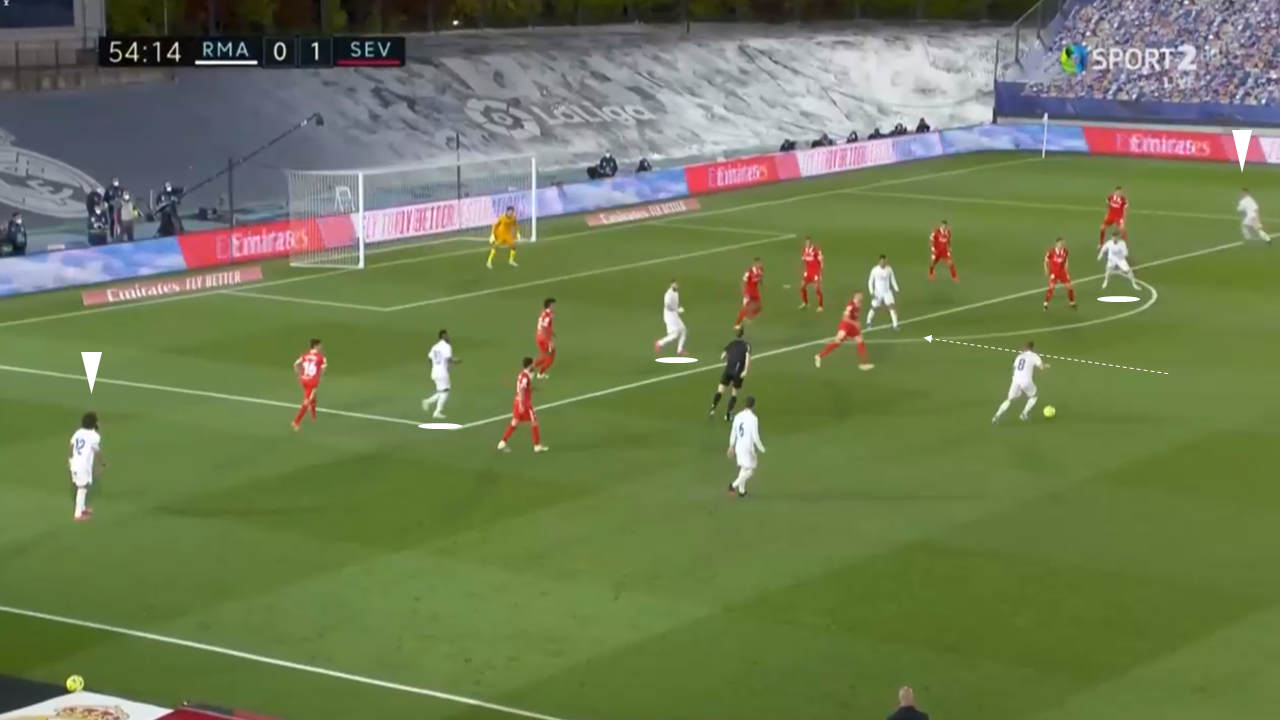 The second half, though, saw a much improved Madrid side turn up. Kroos and Modrić settled into the game and were crucially in pushing Sevilla on the back foot, with the duo advancing much higher centrally and dictating the flow of play. Casemiro joined the frontline and with the full-backs also pushing higher, Madrid effectively had six players in attack, with Kroos and Modrić behind them to control the passing and rotate the ball from flank to flank. Sevilla had to effectively move into a 6-3-1 in such a case, to prevent being outnumbered among the backline and in reality, this meant that there was a crowd of players just on the edge of the box. The low-block from Sevilla still made it very difficult for Madrid to penetrate and the fact that they were still a threat on the counter meant that Madrid could not over-commit just yet. 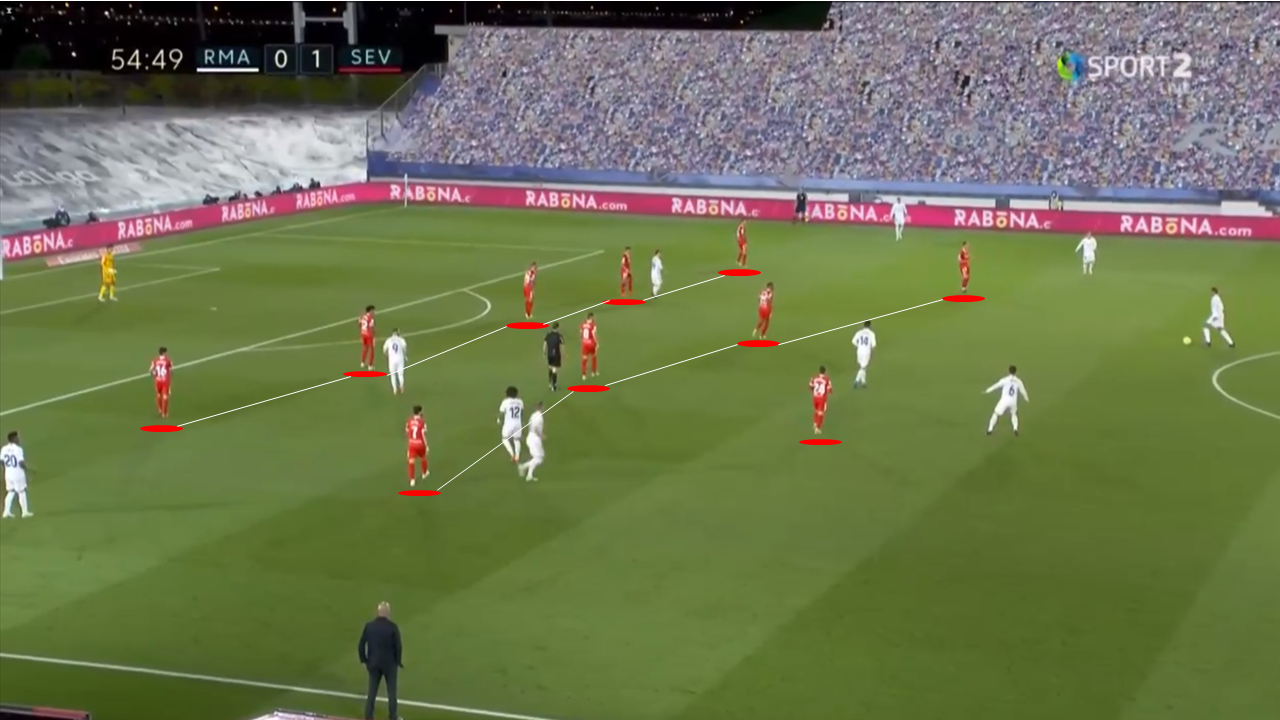 Sevilla’s 5-4-1 formation in the second half still maintained their defensive solidity and was very obviously set up to work on the counter-attack. This was something Chelsea had done in midweek as well, exploiting Madrid’s eagerness to find a goal by hitting them on the counter and sealing the tie. However, in midweek Ramos looked incapable of dealing with the counters but in this fixture, Militão was once again showing his worth, using his impressive pace and strength to stop the counters of Sevilla. They could not always rely on Militão to stop the counters though, and with the cautiousness coupled with Sevilla’s resolute defence, Madrid still could not find their equaliser.

Sevilla overcommit and nearly throw the game away 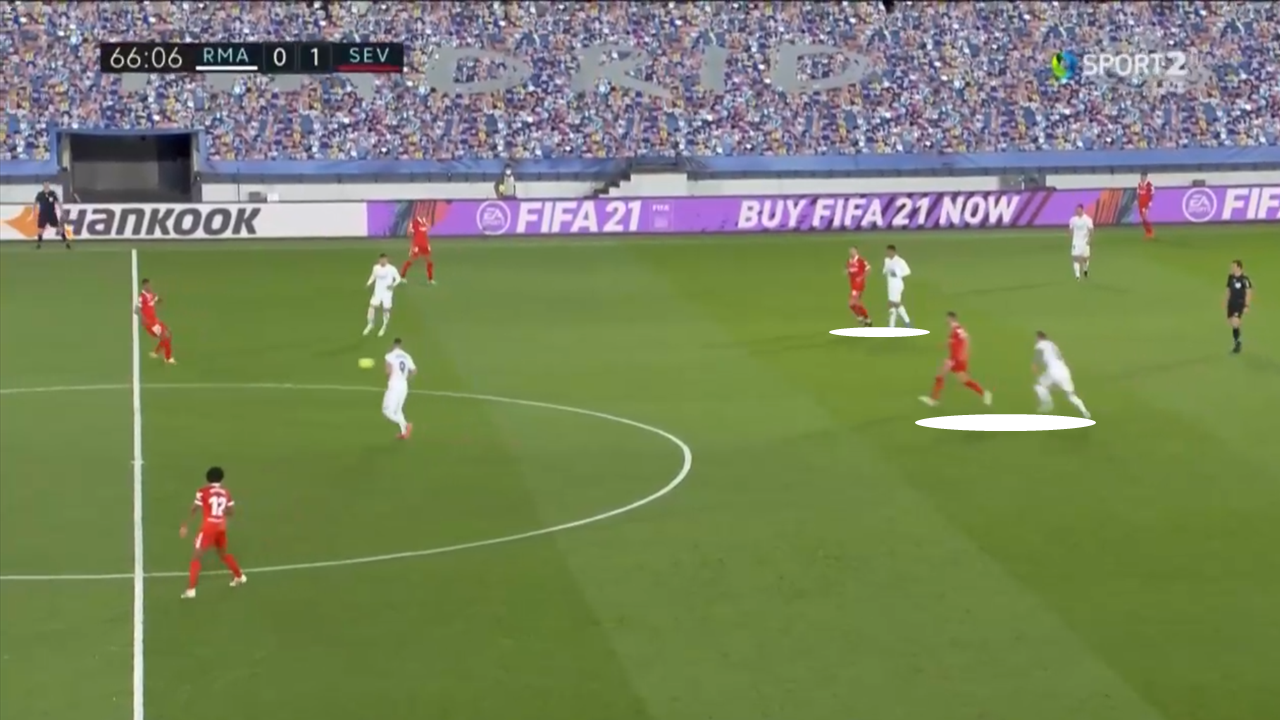 Surprisingly though, it was Sevilla that overcommitted with the side not looking as sure in possession as they did in the opening stages. Madrid were now looking the better side and their press effectively cut out the passing options centrally, meaning that Sevilla’s ball progression was not as good as it had been. The full-backs were still getting high up the pitch but Madrid’s press meant that there was no clear way of getting the ball to them directly. Sevilla looked a side that was stuck in the wrong half or phase of the game and probably did not have to commit themselves forward as much as they did, since they looked very vulnerable at the back.

In fact, the above image is in the build-up to Madrid’s equaliser, with Kroos and Casemiro cutting off the central passing options with their press. However, the center-back still opts for this pass and Kroos dispossesses the midfielder and enables his side to hit back on the counter. With the pace of Benzema, Vinícius and Marco Asensio off the bench, Madrid managed to put away the chance and get back on level terms. 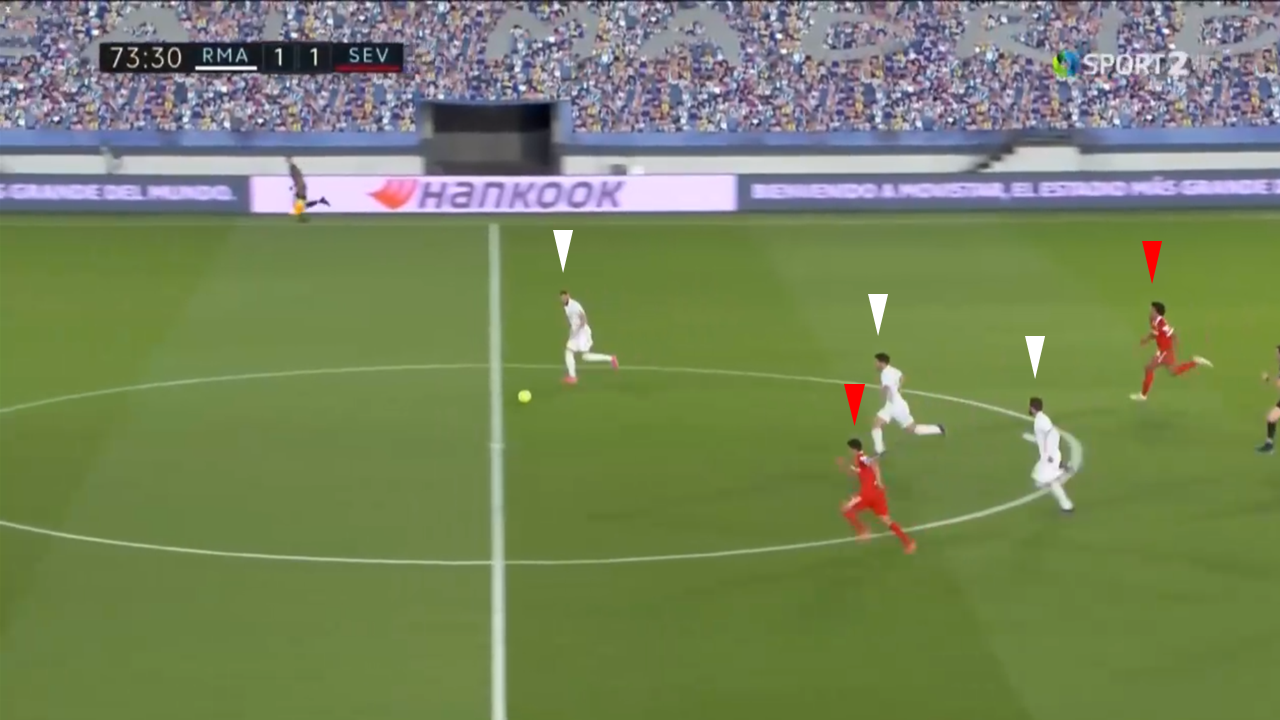 The pressure on Sevilla increased even more, with Madrid sensing the chance to win it and despite their resolute defence fending off Zidane’s side, their counters were not as effective and rarely threatened Madrid. However, upon winning a corner at the end of an attack, Sevilla pushed men forward to find a goal of their own and virtually left no defenders back as shown above. Madrid outnumbered the defence in what was a 3v2 and looked set to score and seal the comeback. Bono brought Benzema down though and although the referee pointed to the spot, Sevilla escaped and were given a lifeline, with Militão deemed to have handled the ball in his box during the corner. Rakitić converted from the spot and against the run of play, Sevilla found themselves in the lead.

From then on, it was Madrid chasing the game, knowing that they needed all three points to keep the title hopes in their hands but Sevilla continued their resilient defence with seemingly no way through. With the game approaching the final minutes though, a hopeful Kroos shot deflected off substitute Eden Hazard, sending Bono the wrong way and finding the back of the net to end the match as a draw. It was by no way Madrid’s best chance to score and a goal that Sevilla would have felt hard done by, but for all of the hosts’ dominance in the second half, the game probably ended with a fair result for both sides. Sevilla may have been able to win it but their lapses in defence may have even seen them lose the game while Madrid looked tired and started poorly, which nearly cost them the game.

Atlético Madrid were the real winners with this result, with the title somehow still in their hands after they let an eight-point lead slip. Real Madrid find themselves second with this result, ahead of Barcelona on head to head, with both sides just two points behind the league leaders. Sevilla missed the chance to close the gap to the top, finding themselves comfortably in fourth, 15 points ahead of Real Sociedad but six away from the top with three games to play. This title race is going down to the wire though and with all to play for, it’s best to not look away.