Everybody knows how much is at stake when you are in the playoffs to earn your place in the Premier League. This season we have four quality teams fighting for the sole remaining spot in the English top flight after Norwich and Watford confirmed their return to the Premier League. 1997/1998 is the season when Barnsley was last time in elite level, while Brentford never played Premier League in a new era. On the other side, Bournemouth and Swansea were regular participants in recent years.

In this analysis, we will make a preview for both matches with a short tactical analysis of the Brentford and Bournemouth match. The match between Swansea and Barnsley will be only a brief preview.

Bournemouth is coming to 2nd leg with a 1-0 win. Even though Brentford showed a little more, Bournemouth was dangerous on counter-attacks and Danjuma managed to score a winner from one of those counter-attacks. Brentford now has a home match to try and turn this tie around to go into another EFL Championship Playoffs final at Wembley after losing last season to Fulham. 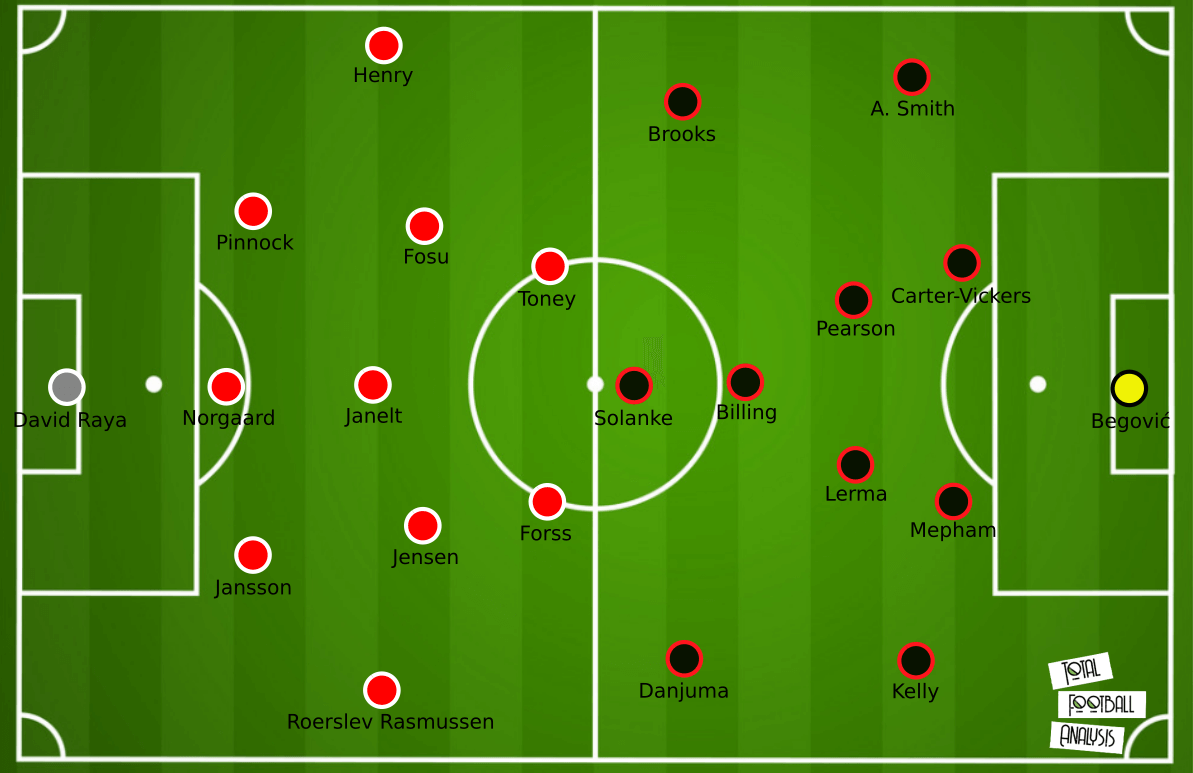 We expect that Thomas Frank goes with a similar starting XI with a slight adjustment on left wing-back. Between the posts will be David Raya and the trio in front of him will be Ethan Pinnock, Christian Nörgaard and Pontus Jansson. On the left, we will probably see Rico Henry instead of Sergi Canos who played the first match in that position where he isn’t natural. Right, wing-back will be Mads Roerslev Rasmussen who should contribute more in this match in the offensive phase. In the midfield, we know that Josh Dasilva is still injured and the trio in midfield will be Vitaly Janelt, Mathias Jensen and Tarique Fosu. Of course, Fosu is more offensive and it could look like he is partnering Ivan Toney and Marcus Forss in the attack. It will be interesting will Frank give a chance from the start to Bryan Mbeumo in search of the right solution in the attack.

On the other side, Johnatan Woodgate will be forced to make a change at the centre-back position since their captain Steve Cook injured in 1st match. Starting goalkeeper will be experienced Asmir Begović. On the full-backs, we will see Adam Smith and Lloyd Kelly like in the first match, with Smith having more freedom going forward. The Centre-back duo should be Cameron Carter-Vickers and Chris Mepham who will replace injured Cook. Jefferson Lerma and Ben Pearson will be in the centre of the midfield while Philip Billing will stand in front of them as a more offensive midfielder. On wings, we don’t expect any change with Arnaut Danjuma and Manchester United transfer target David Brooks keeping their place. Starting centre-forward will be Dominic Solanke who was crucial for Bournemouth this season. 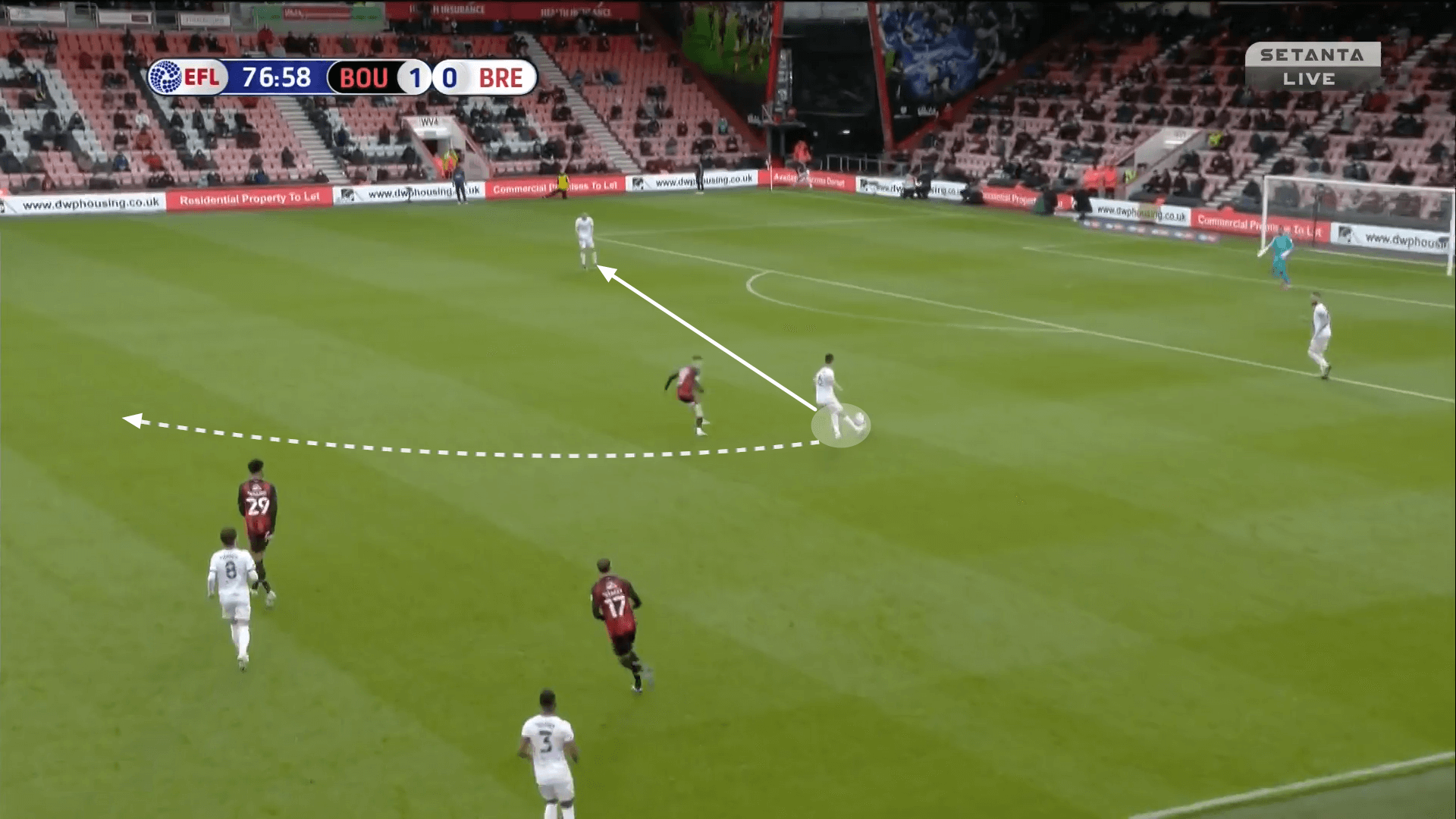 In the image above we will see how Brentford created few dangerous situations with Norgaard as a key figure. Norgaard positionally starts as central centre-back in three-man defence. Frank tactics were when Brentford is in possession that Norgaard turns into a midfield pivot which also puts Fosu into a more advanced position when attacking. In this situation, Norgaard made a pass to right centre-back and continued his run unmarked through the middle. 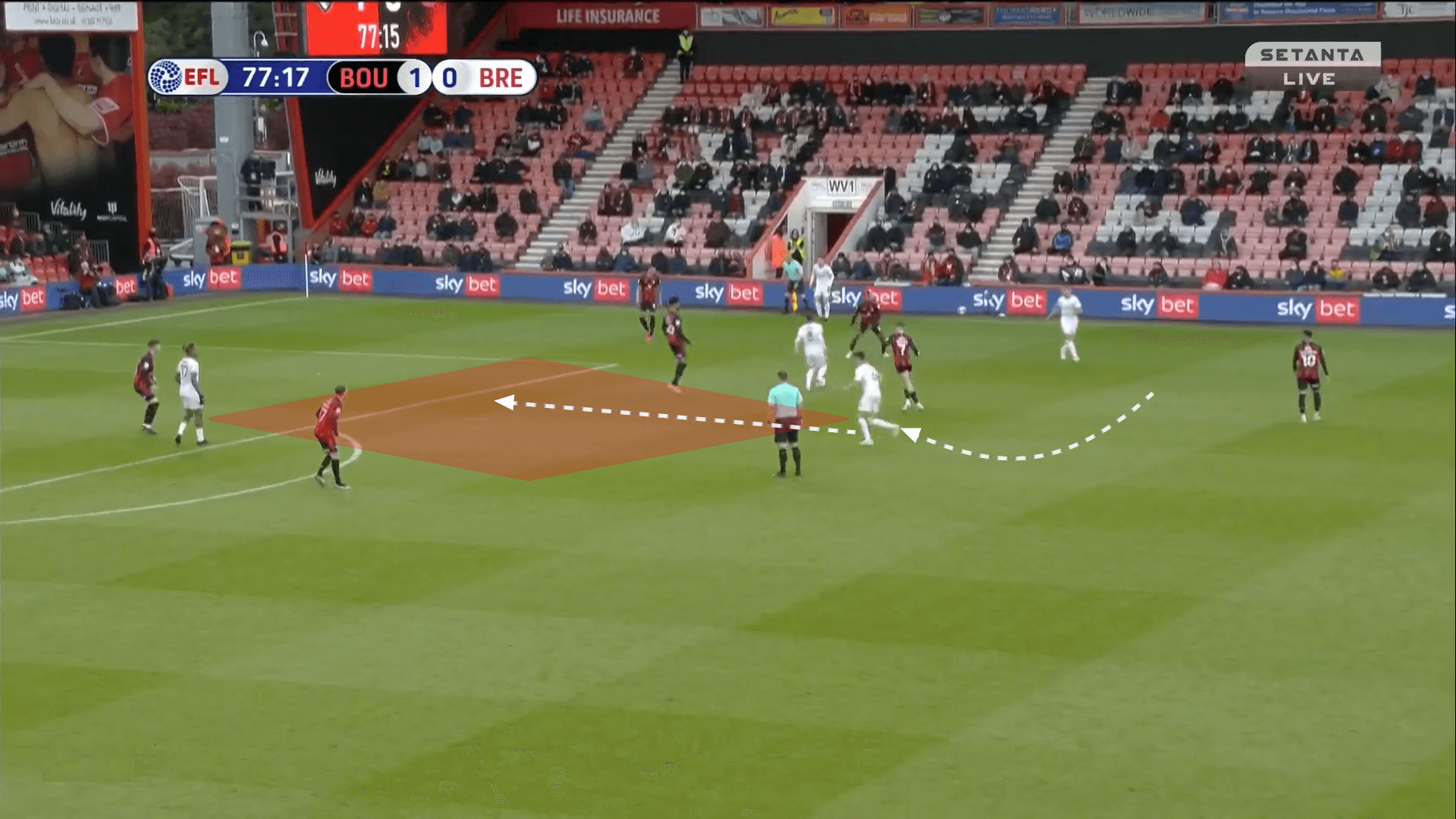 Between the first image and this image he made a pass towards the right side and continued his run into the final third. As we can see once again nobody prevents him from moving between the lines and Bournemouth showed in few situations bad marking on halfspaces, especially on this side. We can see how Bournemouth left-back Kelly is standing wide to mark wide-player which is the reason why Bournemouth defence is spread. Brentford will surely look to exploit this in 2nd leg while Bournemouth will need to prevent these sequences to happen if they want to stop Brentford from getting into their penalty area. 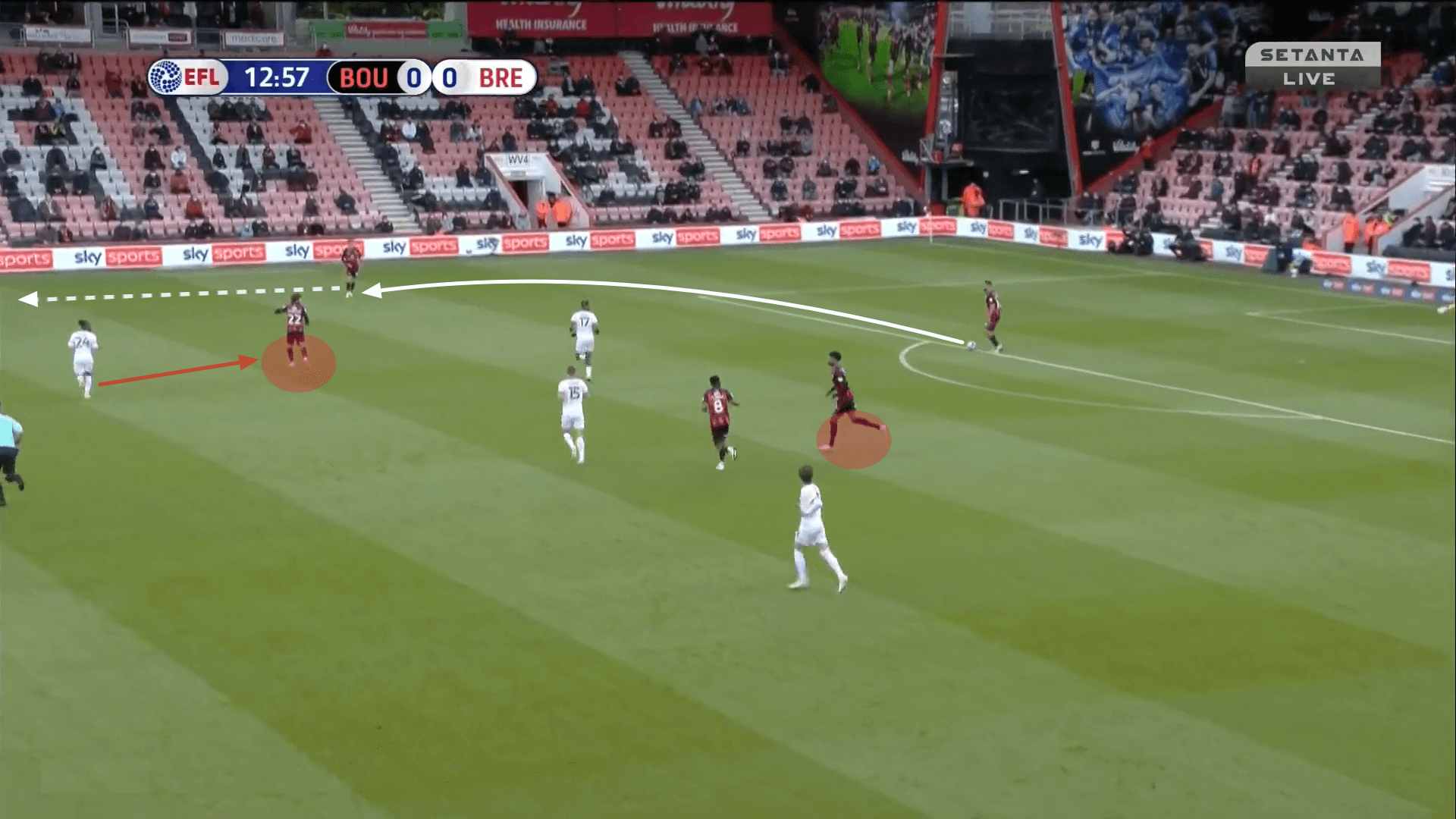 We know that Bournemouth will mostly look for their opportunities through counter-attacks and that Brentford will mostly have possession. However, given the Brentford tactics, we saw some space for Smith on the right side when Brentford is trying to disrupt Bournemouth defence with their press. Movements from Bournemouth midfielders can sometimes engage Brentford players on them which then allows Smith to receive the ball without pressure and he is capable of progressing it further. On the other side, Bournemouth won’t progress that much since Kelly is more defensively oriented and even acts as 3rd centre-back in some situations. If Frank puts Henry instead of Canos on left wing-back we will probably see a little more intensity on Smith than what Canos offered.

The 1st match showed us that both teams have a straight strategy how they will try to get through to the final and we can assume that in 2nd match Brentford will attack even more while Bournemouth will wait patiently for their chances. Brooks and Danjuma will be prepared for counter-attacks and we are already aware of how deadly they can be in those situations. If we had to highlight one player for this match it is surely Ivan Toney, he showed numerous times this season how deadly he can be and he is able to decide the match on his own. Mepham and Carter-Vickers will have a tough task to stop this season Championship top goalscorer.

Swansea gets home with a valuable minimal win away at Barnsley. They will have to keep that advantage at home which is not going to be easy since Barnsley showed multiple times this season how dangerous they can be. Valérien Ismaël players will want to score as early as possible to level the tie. 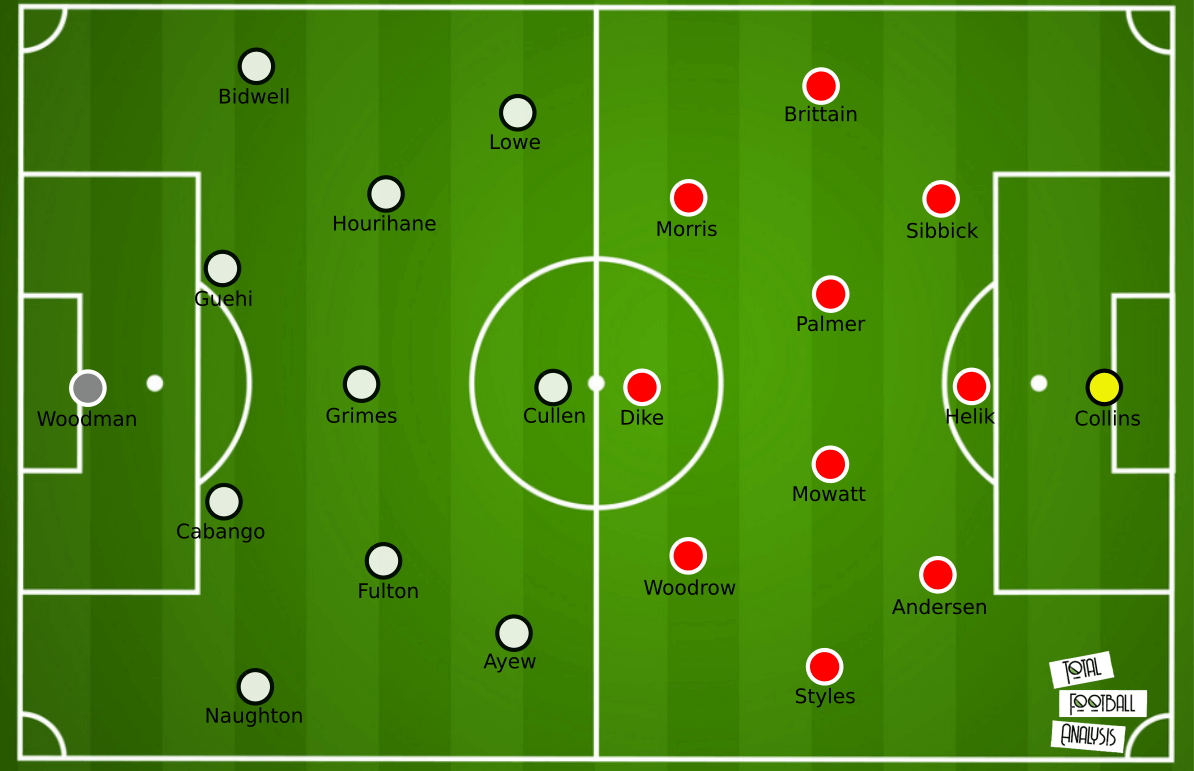 Swansea will start in their 4-3-3 formation just like in the first match. On the goal, we will see Newcastle loanee Freddie Woodman who kept a clean sheet in 1st match with great goalkeeping and he was on a high level. Marc Guehi and Ben Cabango will start as a centre-back duo. On full-back positions, we will see Jake Bidwell and Kyle Naughton. Captain Matt Grimes will start in midfield accompanied by Conor Hourihane and Jay Fulton. The only goalscorer in the first match Andre Ayew will start on his natural right-wing while Jamal Lowe will occupy the opposite flank. Centre-forward will probably be Liam Cullen like in the first match or maybe Cooper will add more experience with Wayne Routledge which would mean Ayew would play as centre-forward.

Ismaël will go with his usual 3-4-3 (3-4-2-1) formation. On goal will start Brad Collins who took over starting position halfway through the season and showed a little more than his teammate Jack Walton. Trio in front of Collins should be Mads Juel Andersen, Michal Helik and Toby Sibbick. On wide positions will start Callum Brittain on right and Callum Styles on left. Romal Palmer will start in the midfield alongside skipper Alex Mowatt. In the attack alongside Daryl Dike and Callum Woodrow, we will probably see Carlton Morris instead of Dominik Frieser. Morris joined on winter window and managed to score 7 goals in 23 appearances in the Championship.

As usual, we will see a lot of pressing actions from Barnsley, in the first match Barnsley had PPDA 6.86 compared to Swansea’s 9.23. In this match, Barnsley will again impose their high-intensity press to put Swansea defence in situations where they could make mistakes in dangerous areas.

We could say that in the first match Swansea got away with a lucky win since they only had 0.32 xG compared to Barnsley’s 1.72 xG which tells us how good a match Woodman had for Swansea. It will be interesting can Swansea once again prevent Barnsley from scoring because they have also quality set-pieces from where they can endanger them as well.

We can assume that Swansea will wait for their chance from counter-attacks while Barnsley will be on the front foot from the start of the match.

Two really close matches which could go either way. We know how close Brentford was close last year to go into Premier League and now they are one goal behind in the semi-final, it will be exciting to see can they turn that around and go into the final second year in a row. Both Bournemouth and Swansea will look to make their way back into Premier League after relegating in the last two seasons. At the start of the season, Barnsley surely didn’t expect to fight for promotion, but they are now in a situation where they can make a miracle.