While the regular EFL Championship season may have concluded, with Norwich City and Watford having bounced straight back up to the Premier League following relegation last season, the identity of the third team to join them will take the scenic route through the playoffs, with Brentford, Swansea, Barnsley and Bournemouth competing to make it to the English top flight. The first leg of the semi-finals were played this week, with Bournemouth hosting Brentford before Saturday’s return leg, and the home side will go into that match with a slender 1-0 lead courtesy of an Arnaut Danjuma goal in the second half of this match.

We will aim to dissect both sides’ tactics in this tactical analysis of the first leg, and point out areas that could be crucial for both Jonathan Woodgate and Thomas Frank to consider for the upcoming second leg, which will decide who gets to face either Swansea or Barnsley at Wembley for the chance to enter ‘the promised land’ of the Premier League. 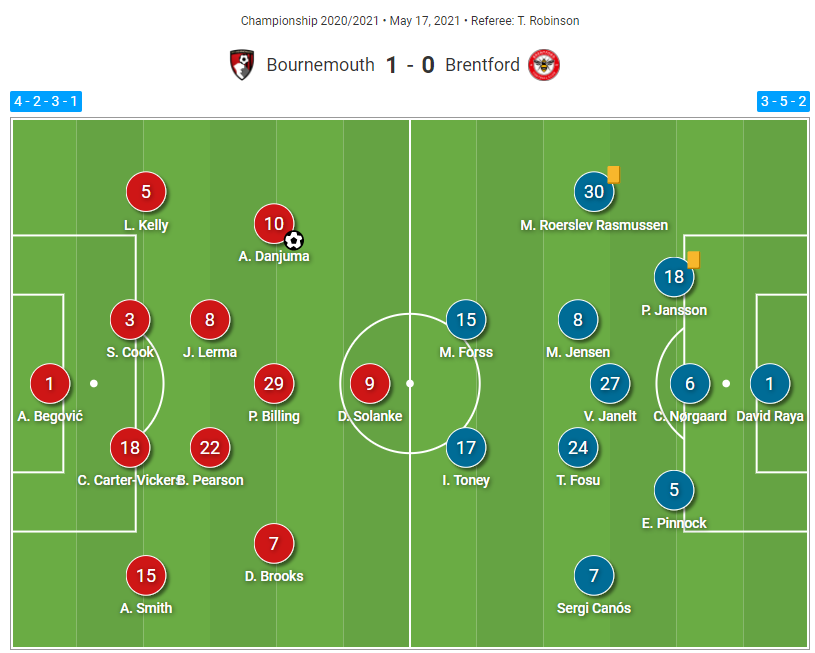 Having rotated heavily across the last few games of the regular Championship season, Woodgate put out what can probably be considered his first-choice side here. Lloyd Kelly was the more reserved of the two full-backs, often staying deep to form a back three while Adam Smith pushed on on the opposite flank, while Ben Pearson and Jefferson Lerma played in a midfield pivot, behind Danish international Philip Billing. Danjuma, David Brooks and Dominic Solanke formed a dangerous front three. Captain Steve Cook was forced off by a leg injury just before half-time, and was replaced by Welsh international Chris Mepham at centre-back.

Thomas Frank once again sent Brentford out in the 3-5-2 that he has utilised recently. Sergi Canos played in a slightly unfamiliar role at left wing-back, with Mads Roerslev on the opposite flank, while Tariq Fosu, Vitaly Janelt and Mathias Jensen formed the midfield trio. Ivan Toney, who broke the record for most goals in a regular Championship season with 31 strikes, was partnered by Marcus Forss up front.

Under Thomas Frank, Brentford have been renowned as a high-pressing side, and this approach has brought them quite a lot of success over the last few seasons, if not quite delivering promotion yet. This match saw quite a contrast between both sides’ approach off-the-ball – Bournemouth were content to sit back and stay compact, allowing Brentford to come forward with the ball relatively easily, while the Bees pressed in a far more intense manner. This is reflected in both sides’ PPDA for this match – Bournemouth averaged a PPDA number of 17.63, while Brentford’s more aggressive press can be seen from their PPDA of 6.92.

However, we are at the end of a particularly gruelling season, and so Brentford’s press was quite targeted, with their pressing triggers being when the ball was played out wide, or a pass backwards was made. 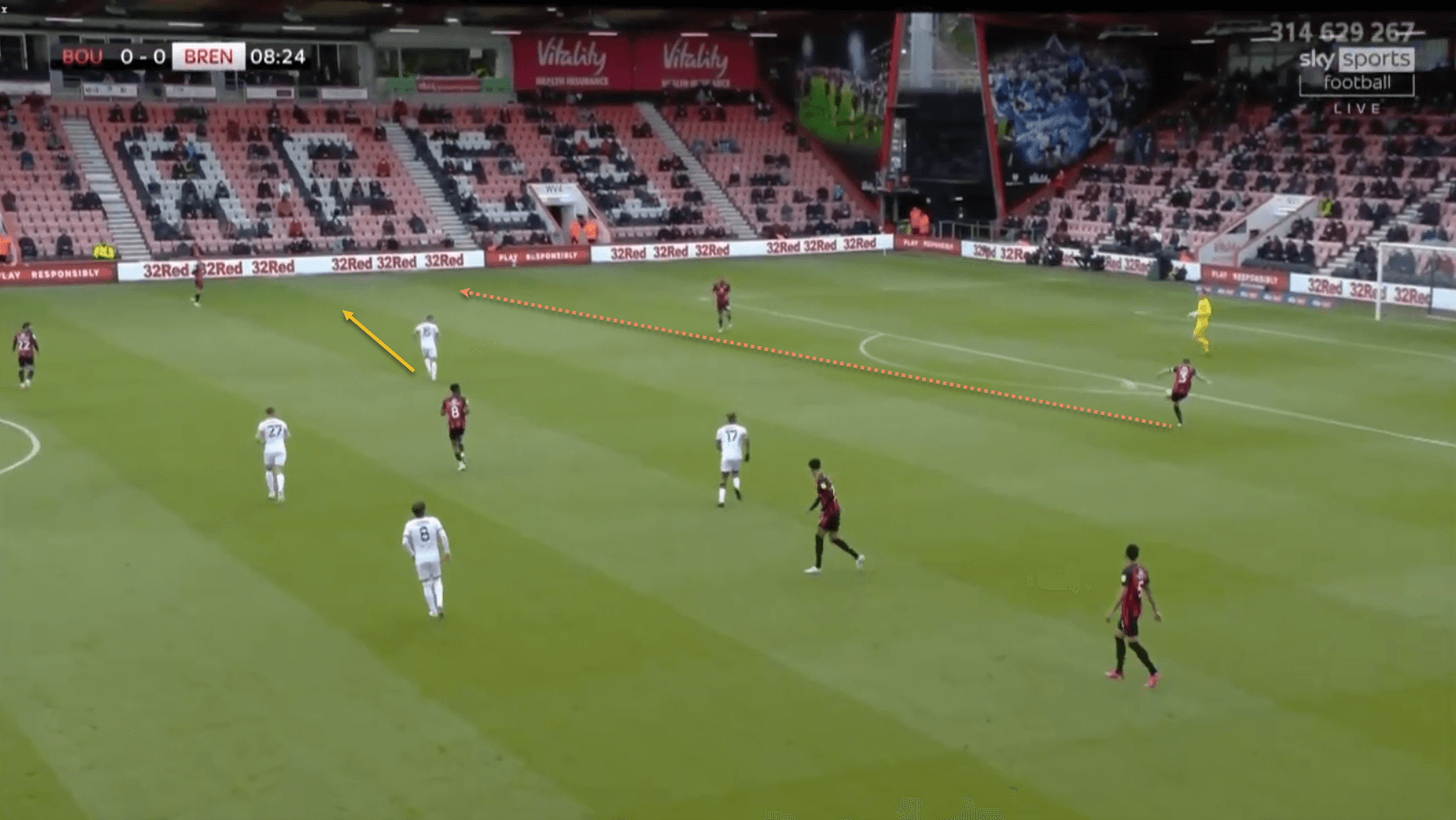 Here, we can see how the Brentford strikers, Toney  and Forss, do not press the Cherries’ centre-backs aggressively – they are sitting off and blocking central passes, and allowing Steve Cook, in this instance, to play the ball out wide to Adam Smith, which is when the press is triggered. 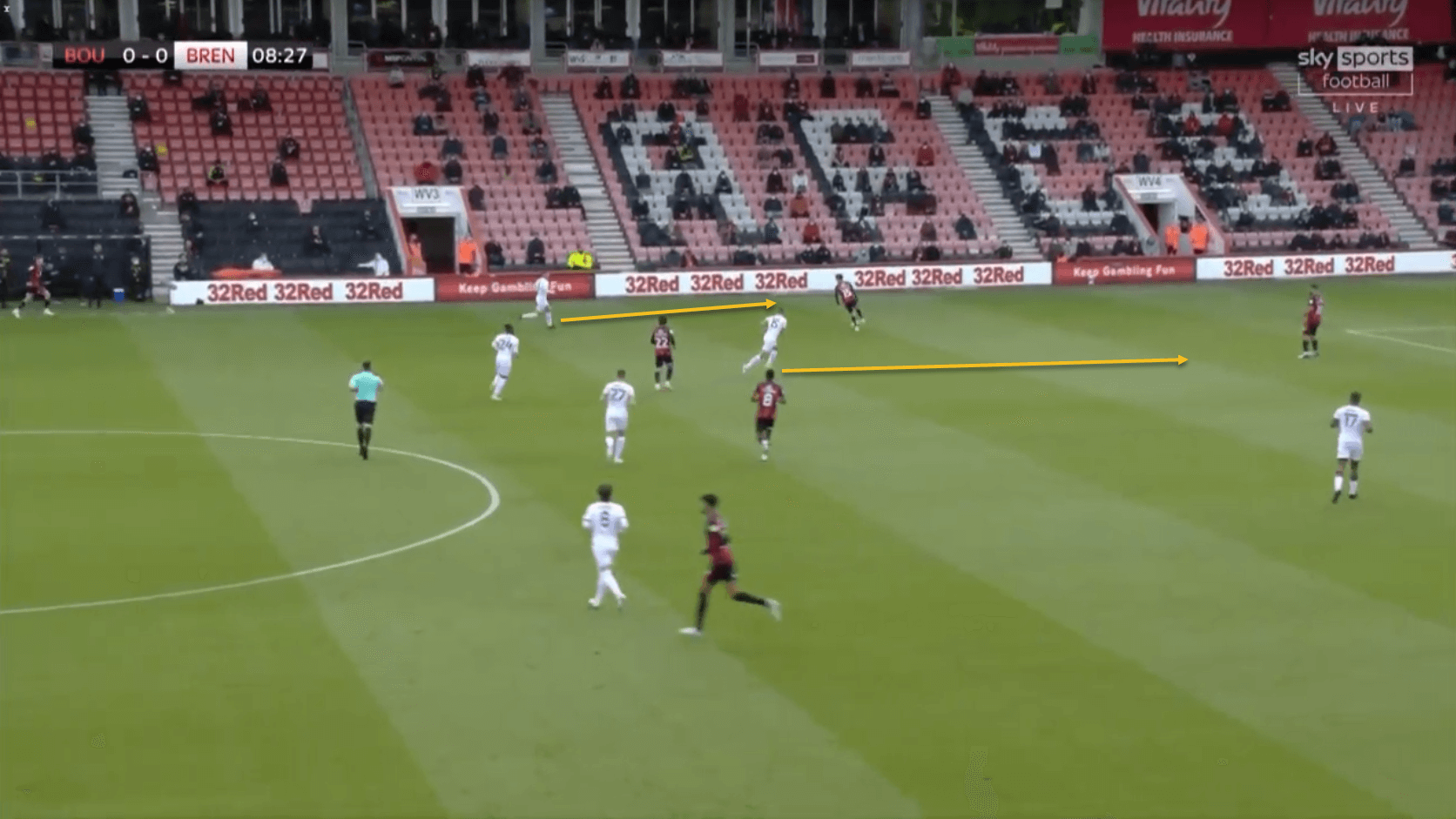 As soon as Smith receives the ball, Canos pushes up to press him, with Forss also moving closer to Cameron Carter-Vickers to cut off the easy pass to him. 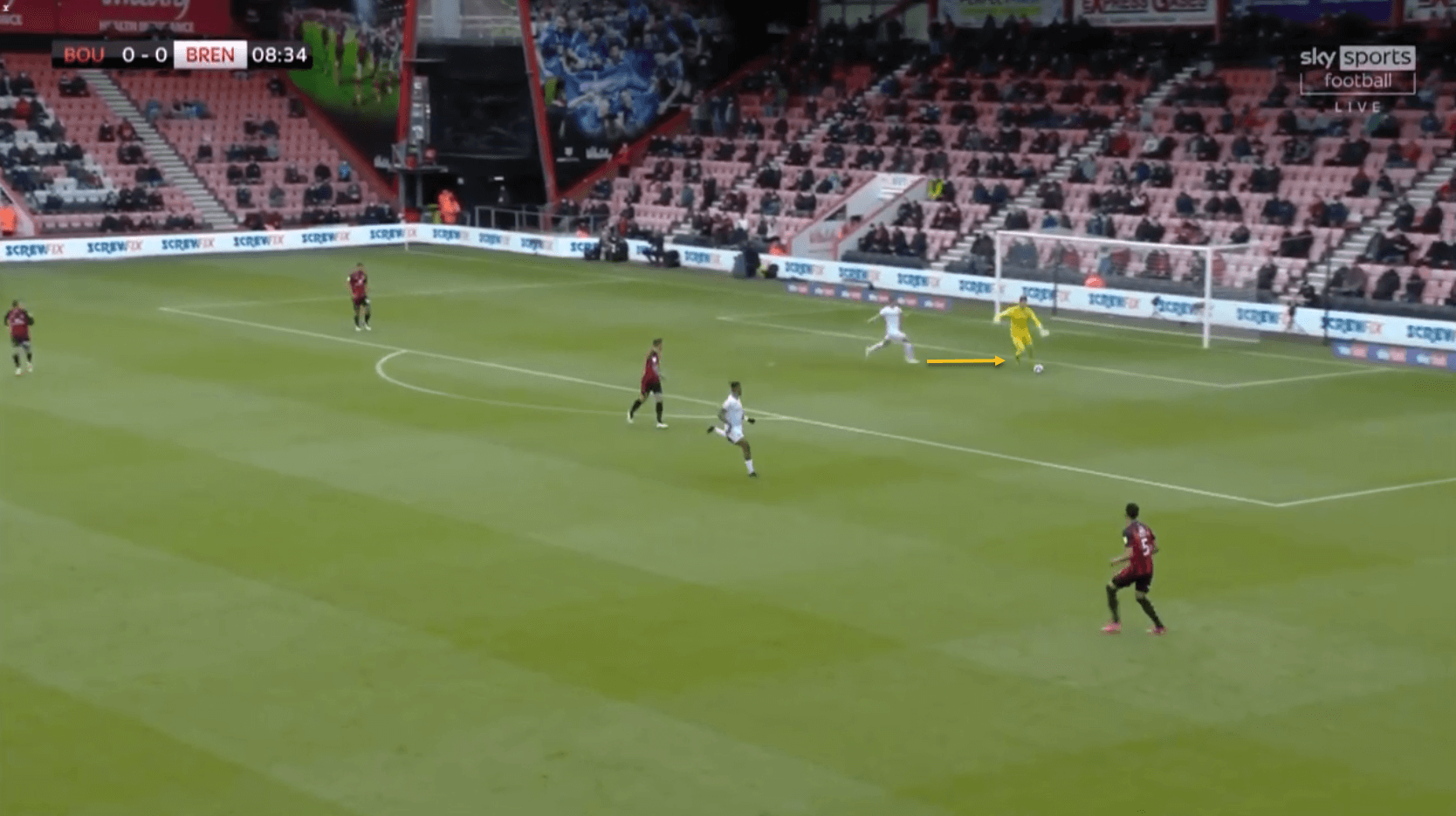 This pressure continues all the way back to the keeper, forcing Asmir Begovic to go long.

Brentford tried to disrupt Bournemouth’s build-up in this manner, by forcing them wide and then pressing aggressively. One of the ways in which the home side tried to combat this was by using Lloyd Kelly as an auxiliary third centre-back, with Smith given the license to push further forward on the opposite flank. 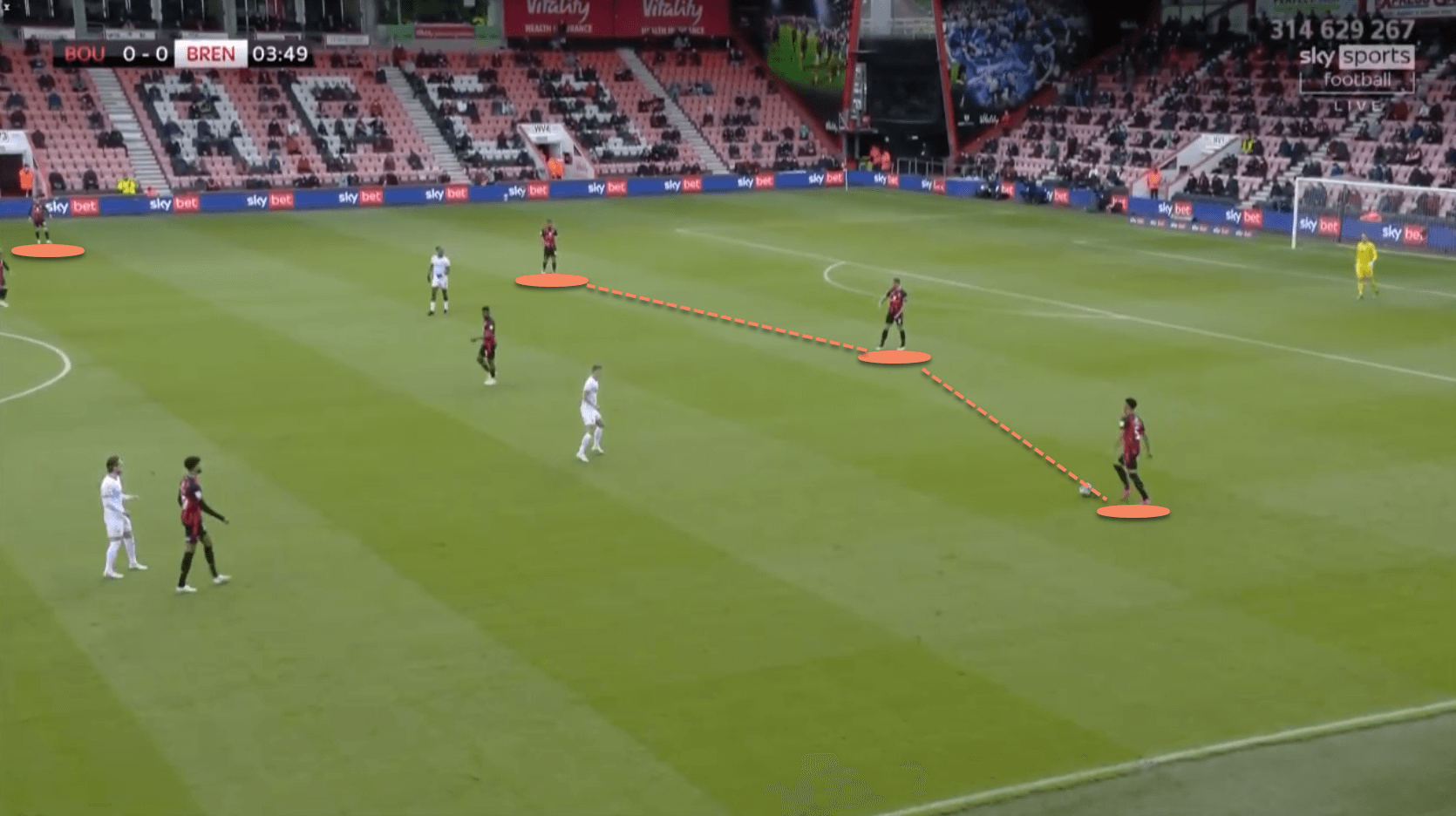 We can see how Kelly has tucked in here to help create a 3v2 in this phase against the two Brentford strikers, while Smith is wide on the touchline on the right.

In general, Brentford’s gameplan was to try and stop central progression from Bournemouth and force them wide. 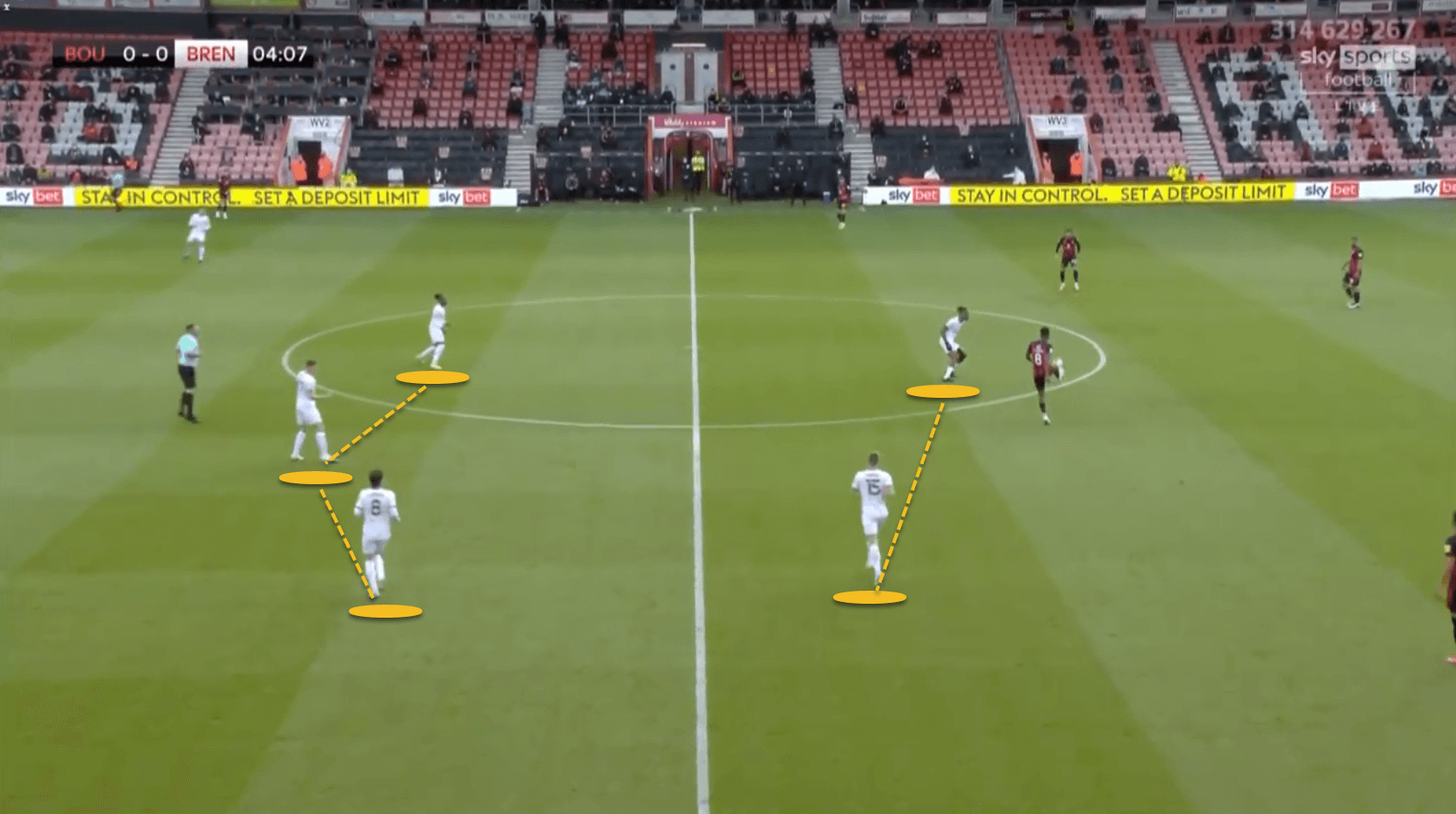 The two strikers stayed deep and narrow, with the midfield trio also doing the same, and as we can see in this image, Lerma has to turn and play the pass out wide with no central progression options available to him on the ball.

This was true for both teams – as we will see further in this analysis, the majority of Brentford’s attacks also came down the flanks, even more so than Bournemouth.

While Christian Norgaard is a defensive midfielder by trade, Frank has used him centrally in a back three this season for Brentford. The Danish international has been able to play a ‘quarter-back’ role from this position, routinely stepping into midfield and dictating play, and he was one of the most important players for the away side in this match, as Bournemouth dropped off and gave him space to advance repeatedly. 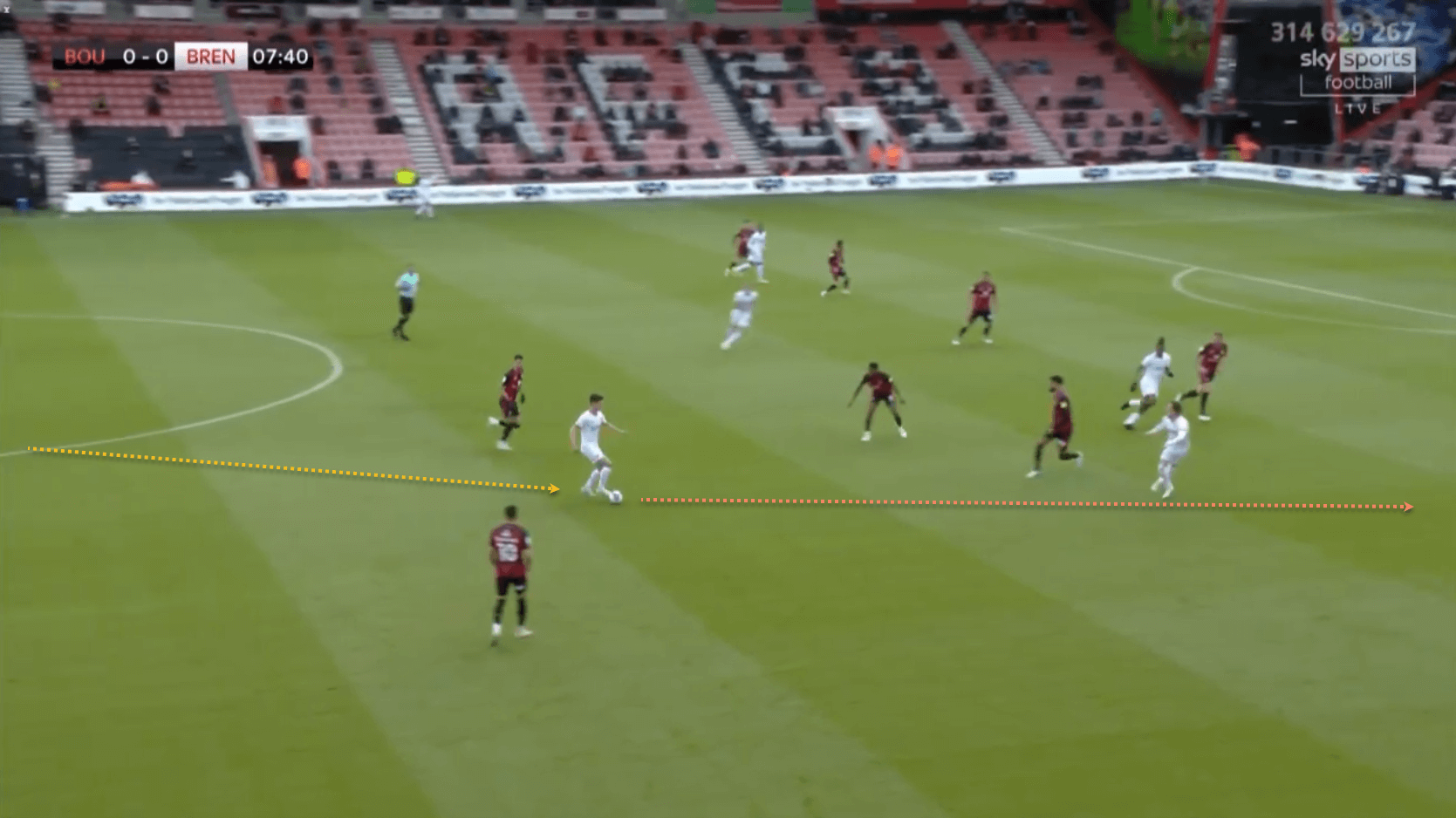 One such instance, where Brentford’s #6 was allowed to drive into midfield on the ball, from where he picked out Roerslev on the overlap on the right flank in a dangerous position. 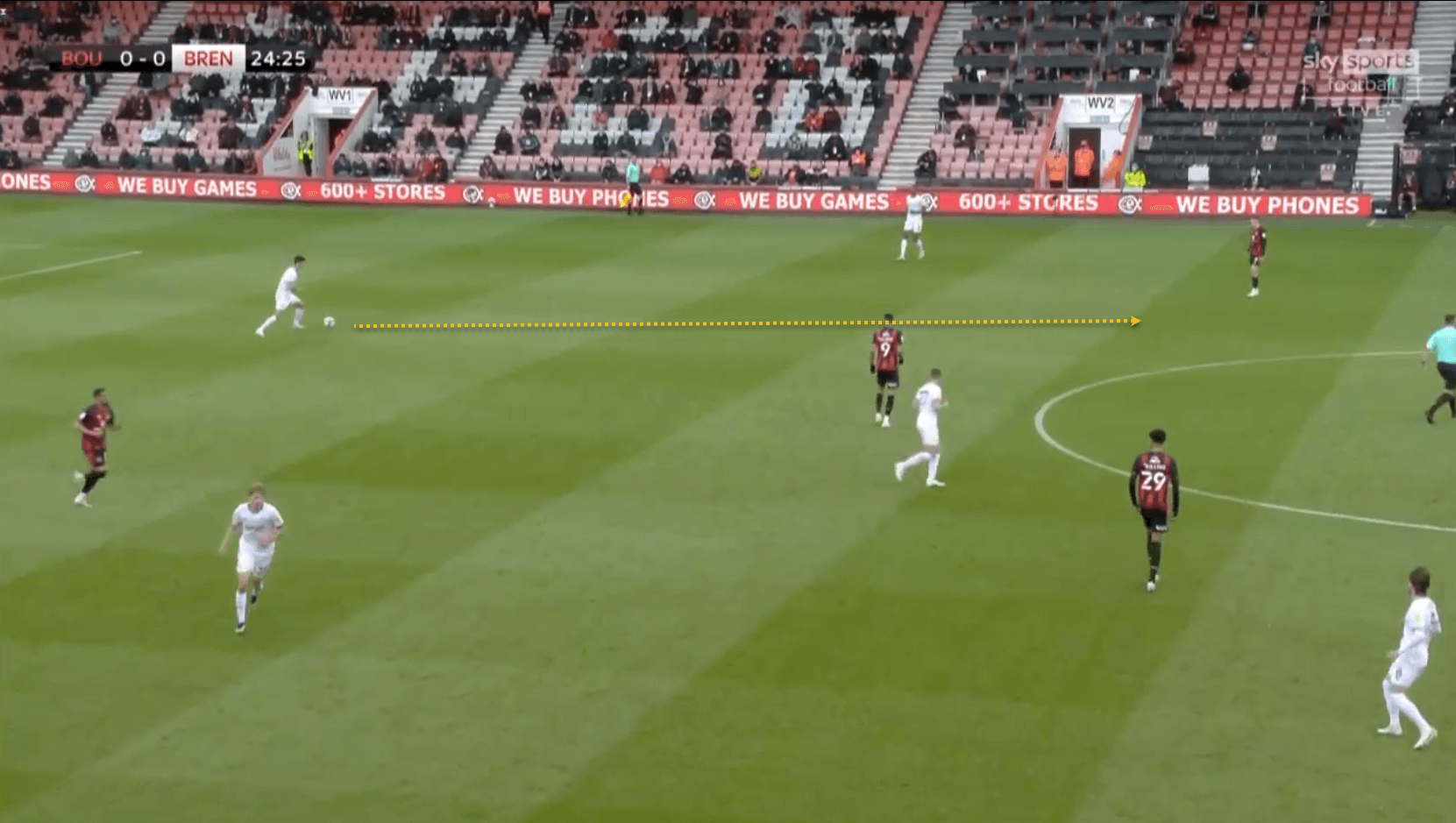 Another instance where Norgaard receives possession deep in his half, but as the image shows, has ample space and time to move forward with the ball

The Dane was also instrumental in directing Brentford’s attacks down the flanks, as he would routinely switch the play out to either flank for Canos or Roerslev. 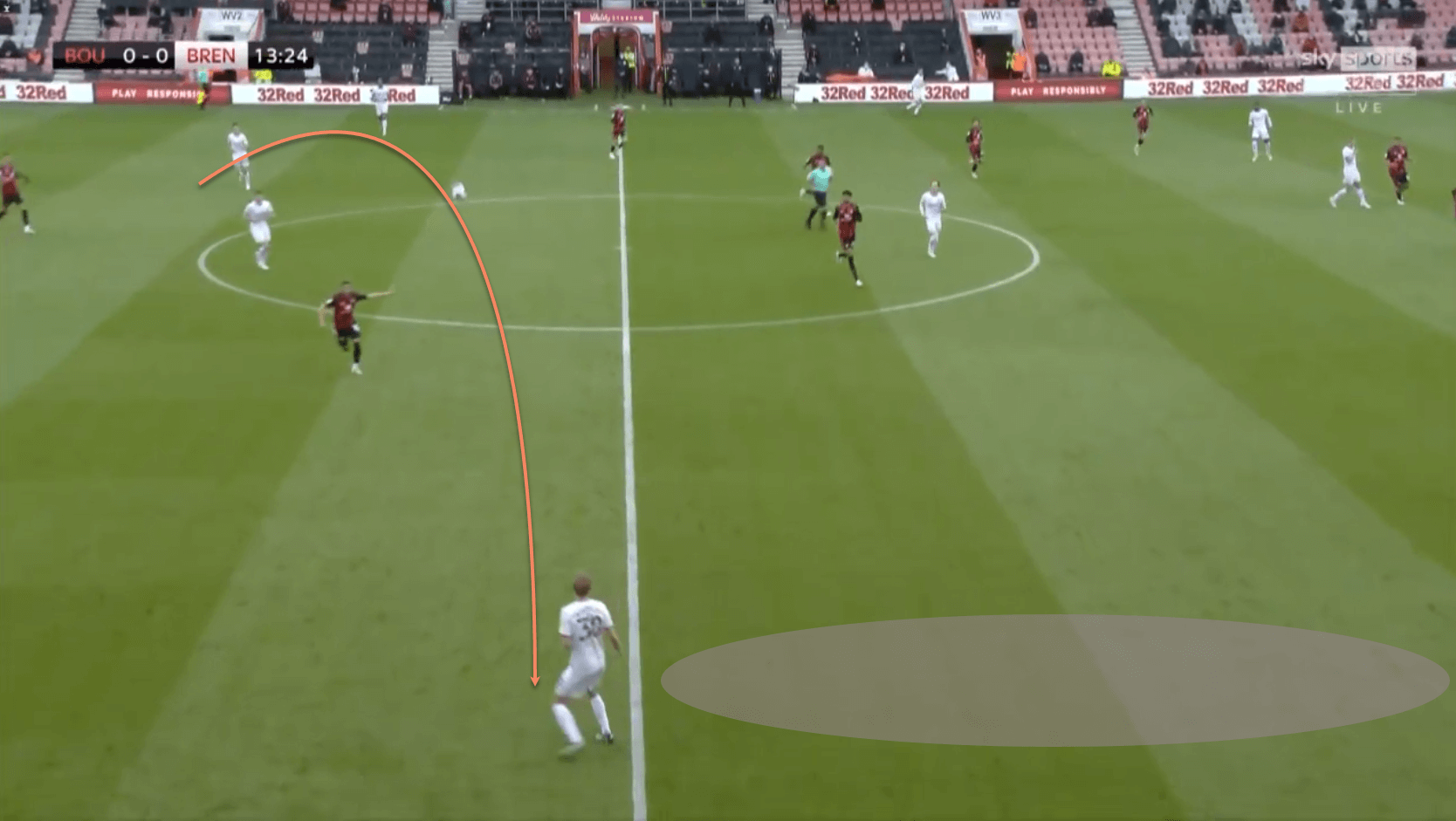 In this example, Norgaard plays the ball out to compatriot Roerslev, who has a lot of space on the right flank… 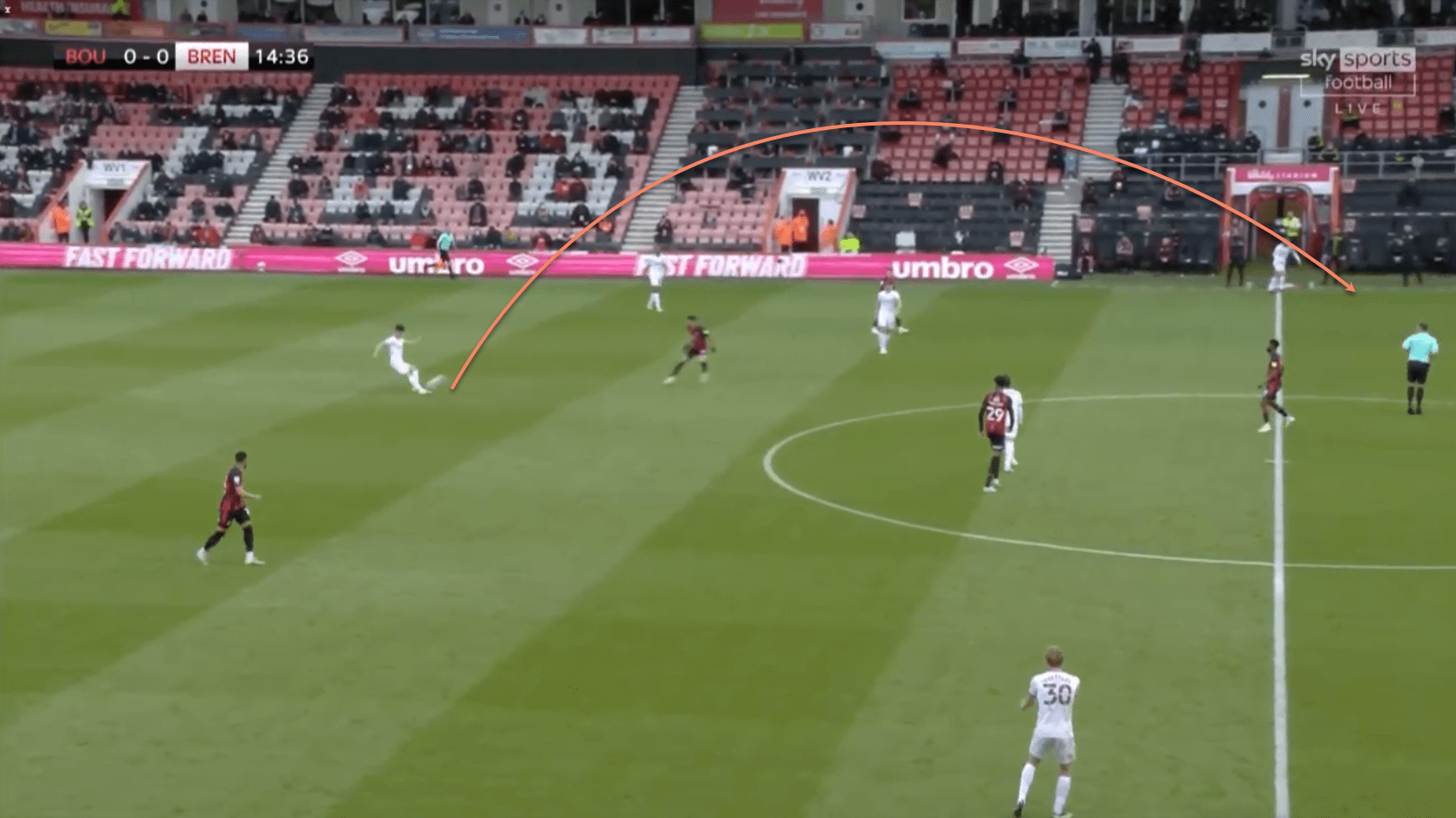 …while in this instance, he plays a similar pass out to the left towards Canos.

Norgaard was one of the key parts of Brentford’s strategy in possession, and he nearly had a telling impact on the match as well, as we will see. 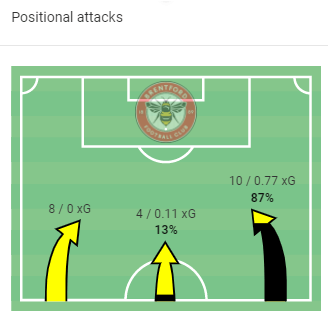 Roerslev would consistently push forward to take advantage of Kelly’s more conservative positioning, which meant that there was always space for him to receive possession and drive forwards. Although Brentford conceded relatively early into the second half, they then dominated the game, creating quite a few good goalscoring opportunities, all of which were created down the right flank. 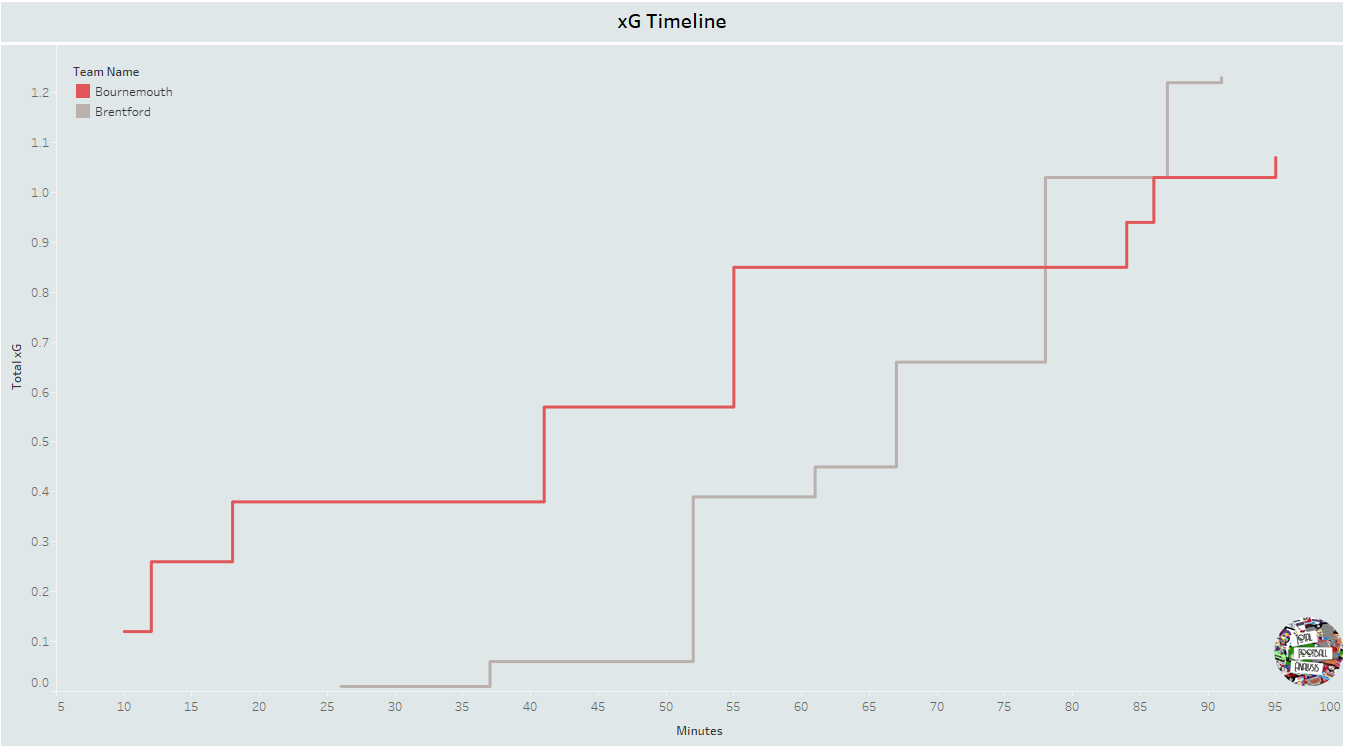 The cumulative xG timeline shows how Bournemouth barely created any opportunities of note after their goal, which came in the 55th minute, and Brentford actually ended the match with a higher xG total than their hosts, which is indicative of the fact that they should have got an equalizer, at the very least, from this match.

One of the biggest chances of the match, which Bryan Mbuemo unfortunately put wide, came from Brentford’s use of the right flank, as well as Norgaard’s tendency to push forward in possession. 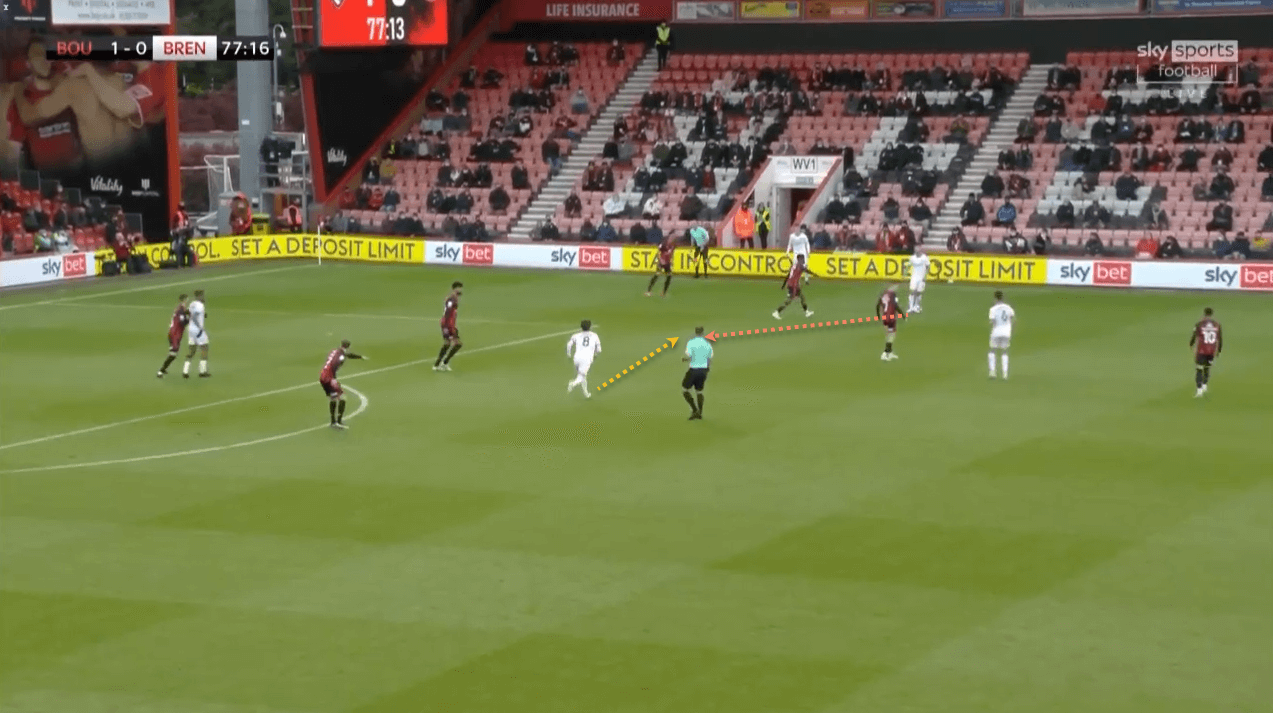 Emiliano Marcondes has possession on the flank, and Mathias Jensen comes across to receive the ball. We can see Jack Stacey gesturing to Billing to pick up the Dane, who is completely unmarked between the lines. 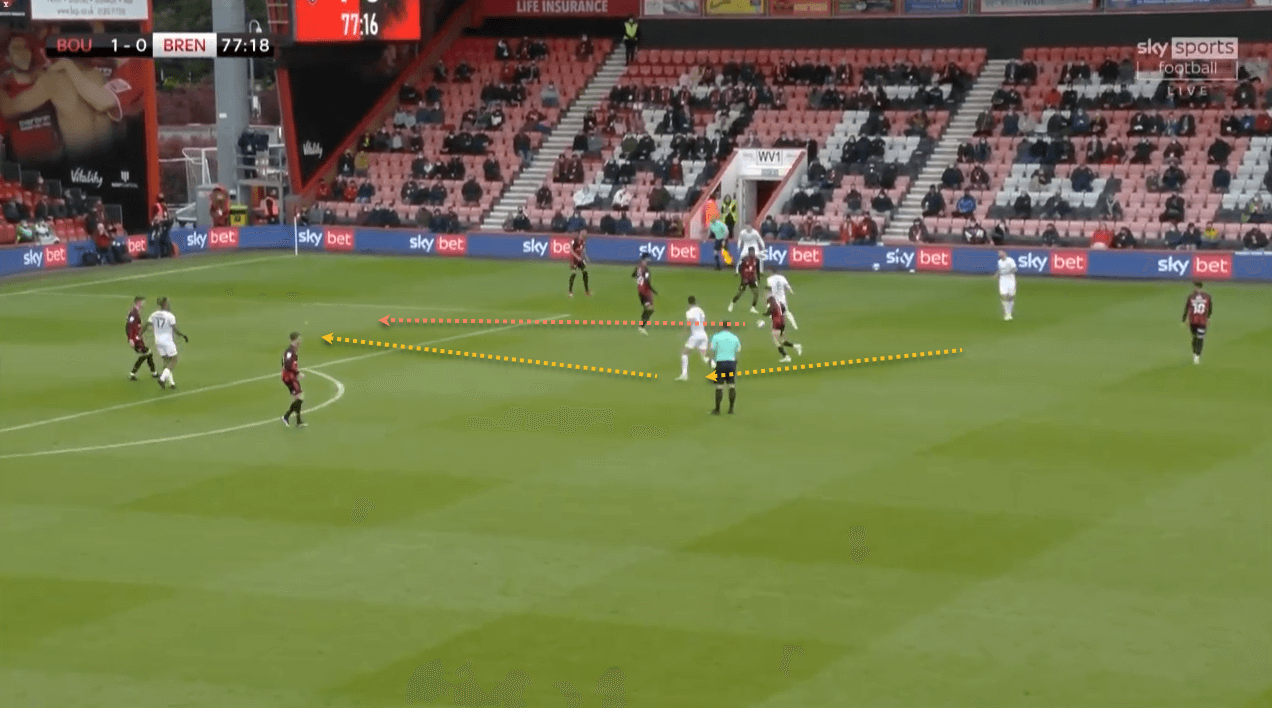 As Jensen receives the ball and turns, Norgaard makes a third-man run into the box off David Brooks, who does not track him, and Norgaard is therefore able to run onto the ball in space in the penalty area 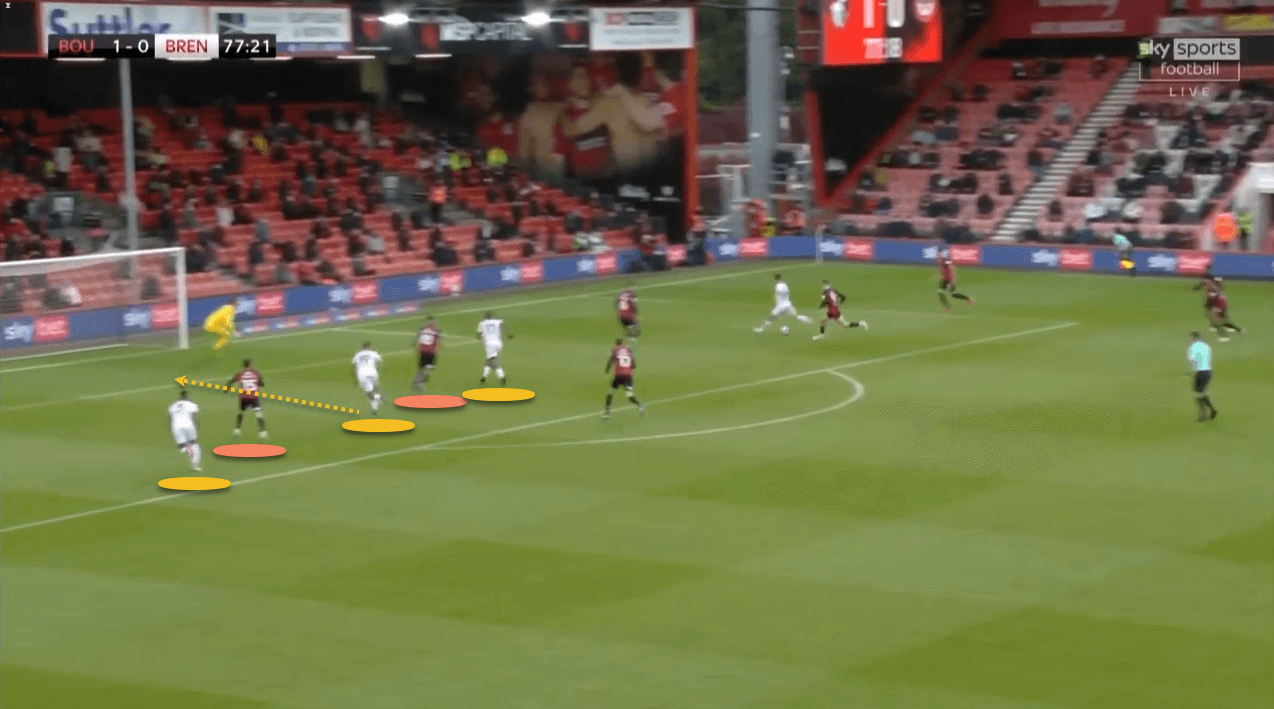 Norgaard puts a first-time cross into the area, where there are three Brentford players who have gotten between the two Bournemouth defenders, as Mepham has had to come across to try and cover Norgaard. Mbuemo, the central player in this Brentford trio, makes full contact with the ball while stretching but can only divert it past the post.

This was undoubtedly the biggest chance of the game, and one that may yet come back to haunt the away side. Nevertheless, it was the perfect encapsulation of Brentford’s attacking strategy in this match – utilising the flanks, with Norgaard orchestrating play and advancing on the ball as well.

Bournemouth played well for large spells of the game, but it was obvious that Frank has been in charge of his side for far longer, as the Bees had a far more cohesive strategy than the Cherries. It is Bournemouth who go into the second leg with a crucial lead, but we fully expect Frank to keep the same shape and largely the same lineup, with potentially Rico Henry coming in for Canos on the left. As far as Bournemouth are concerned, Danjuma’s goal showed their threat on the counter-attack, and thus they have the ability to hurt Brentford even if the Bees dominate the second leg as is expected to be the case. It promises to be a fascinating encounter, and we are surely in for a night of drama and tension before we find out which of these two moves one step closer to that final promotion spot.