Watford’s Struggles: How Brentford’s wing-back system and rotations won them the game in the second half – tactical analysis

The penultimate game week of the 2020-21 EFL Championship saw Premier League-bound Watford travel to 3rd place Brentford. With both teams having their fate sealed this season and with no direct consequences of the result, the game was pretty much for the football purists to enjoy the tactical battle between two of the most tactically strong teams this season.

Both come on the back of a victory in their previous game and would look to close their season strongly. This tactical analysis features the tactics deployed by both the managers and will look into why Brentford emerged as the winners. Let’s begin the analysis.

Watford made 3 changes to the lineup that beat Milwall last weekend. With promotion secured, Xisco wanted to give some minutes to players while also setting up a strong team capable of winning the match. Cathcart, Kabasele, Hungbo and Gray were drafted into the lineup and the likes of Ismaila Sarr being rested. 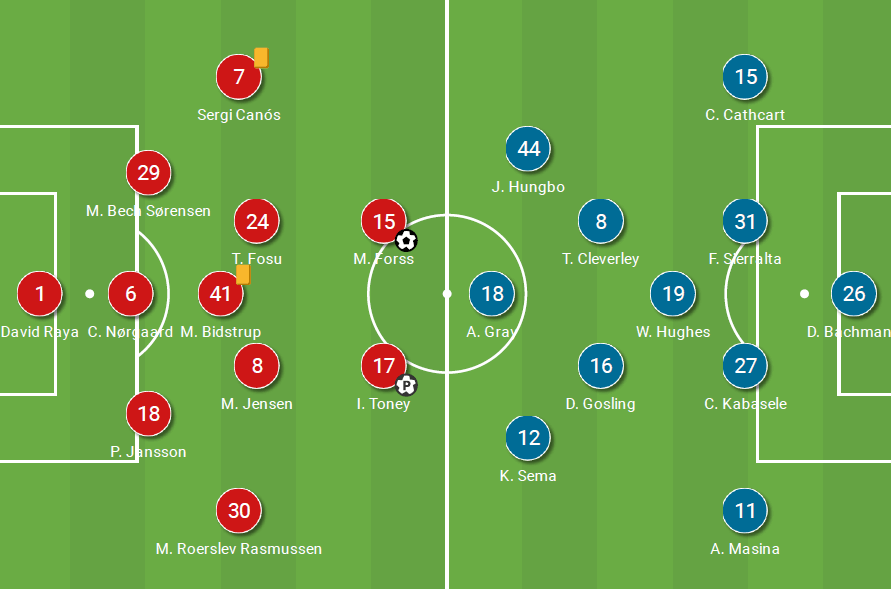 Brentford meanwhile made 7 changes to the lineup that beat Rotherham in the mid-week. The players who were retained were Raya, Ivan Toney, Canos and Bech Sorensen.

Brentford in their 3-4-1-2 system looked to press the Watford defence in a semi man-man approach. The two forwards never looked to press high as they wanted to stay central and slightly at the edge of the attacking third. This is to force Watford wide where Brentford would then look to initiate a man-man press and win the 50-50 duel. We can see the two CFs staying slightly deeper and stop Watford from progressing centrally in the image below. Their trigger would be initiated with the ball moving to the wings.

But Brentford’s issue was they were in a dilemma whether to press in a 3-4-1-2 or a 3-5-2. The CAM, Fosu had to make a decision: either had to stay back like in the above image or press Hughes to stop him from receiving the ball. Especially the 3-4-1-2 had issues whenever Watford used their goal-keeper to lure the Brentford forwards. Fosu moved ahead of Hughes by keeping him in cover-shadow. But this increased his distance from Hughes and when the Watford full-back received the ball he was easily able to play it to Hughes since Fosu was way ahead of him and could not reach him. The example can be seen in the image below. 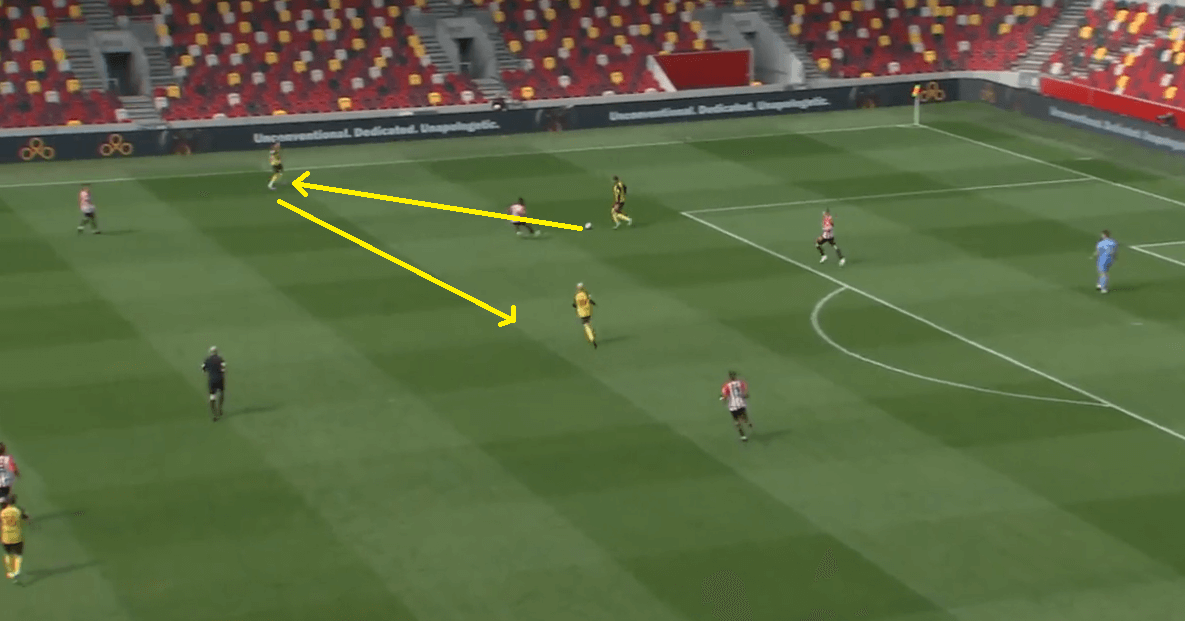 On ideal grounds, their press would be a 3-4-1-2 where Fosu stays behind Hughes and not looking to push ahead of him to press the keepers. This means that Watford have to go long since the CBs and Hughes were man-marked and also the wing-backs and CMs of Brentford in a very good position to have the Watford full-backs in their coverage. We can see how they later settled into this as the game went on that gave them much more stability. 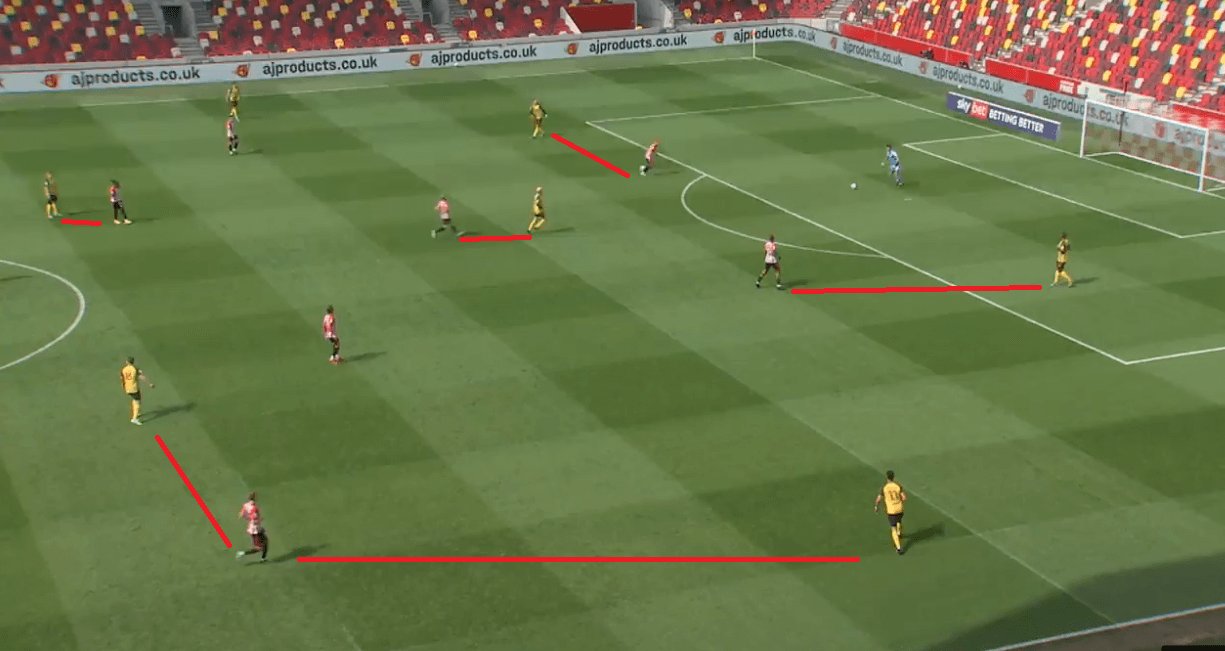 When the ball moved to the Watford full-backs or when it is closer to them the wing-backs in the near flank would move into the next line to make it a 4-4-2 and the entire defence would adjust their position well to tighten the spaces and be compact. This can be seen in the image below. 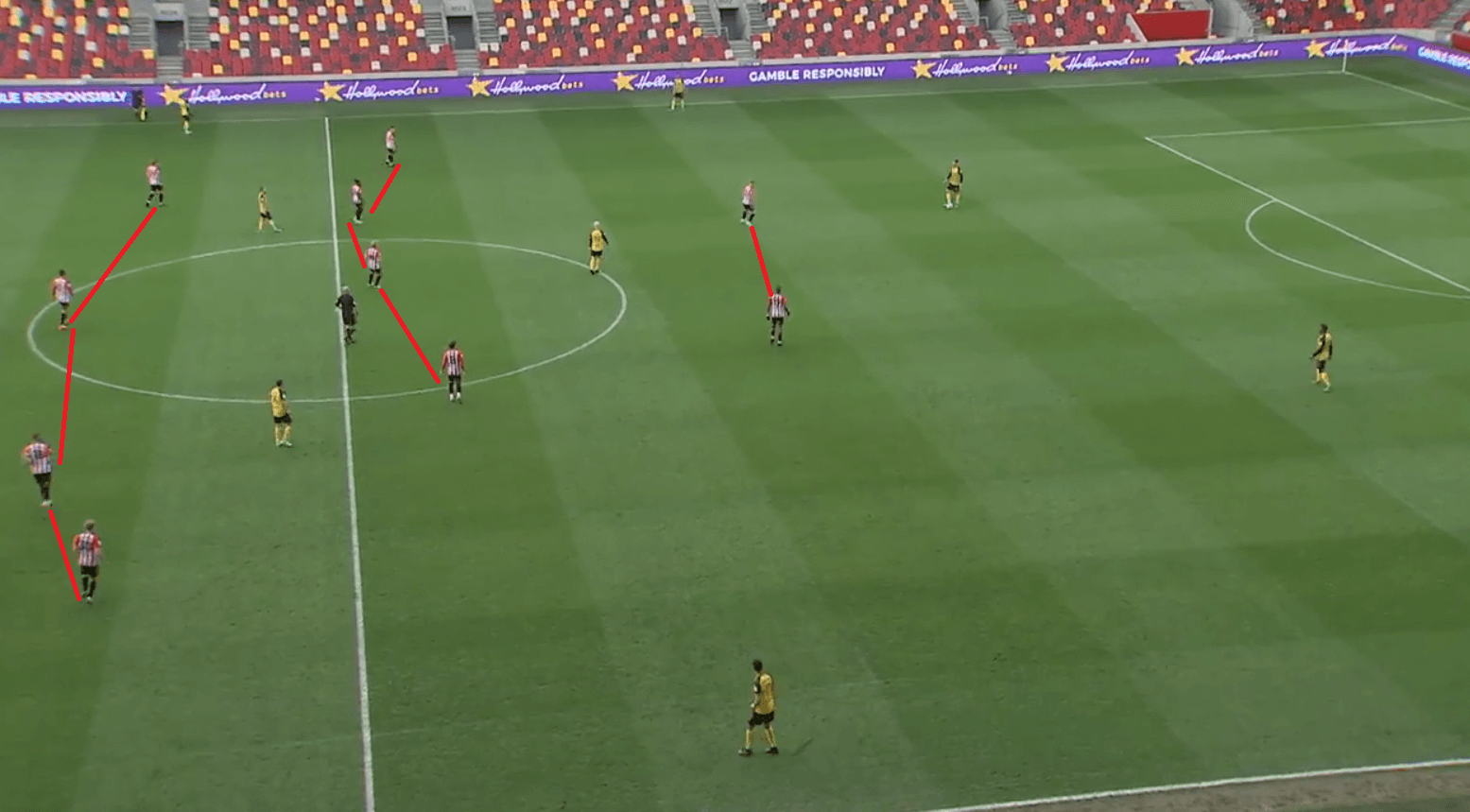 Playing a 3-5-2 system against 4-3-3 means that Brentford have horizontal superiority in the final line if the Watford wingers don’t commit to helping defensively. In the image below we can see Watford going man-man against the Brentford players. The 3 forwards pressed the centre-backs and like their opponents, they looked to force them out wide and use the touchline as a defender. Now when their wing-back dropped, and since the winger was covering the central regions, the onus was on the full-back to push forward press the centre-back. He had to make a decision here either to push forward or stay deep and not expose the CBs in the wide regions. 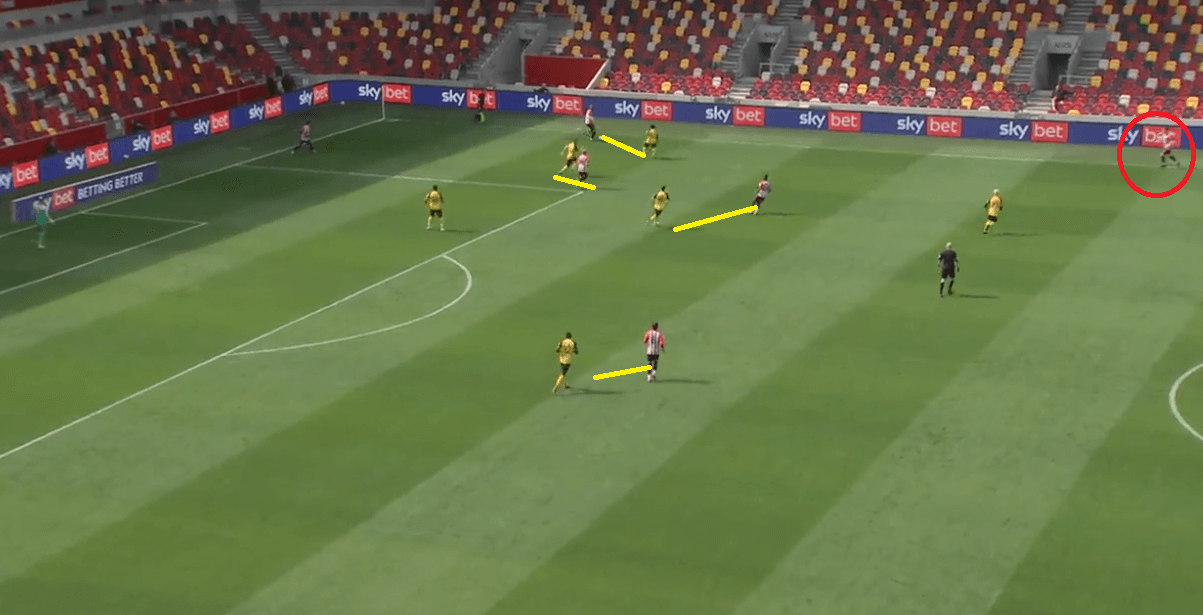 We can see the consequences of the former situation when the full-backs press higher. Now the centre-back has to move to wings or even step forward to cover for the full-back as one of Brentford’s centre-forwards have moved to the wings. Though they win the ball, due to the immediate counter-press they lose it and we can see Forss immediately making a run in behind with the centre-backs ahead of him. Brentford failed to capitalise on these situations during the first half. 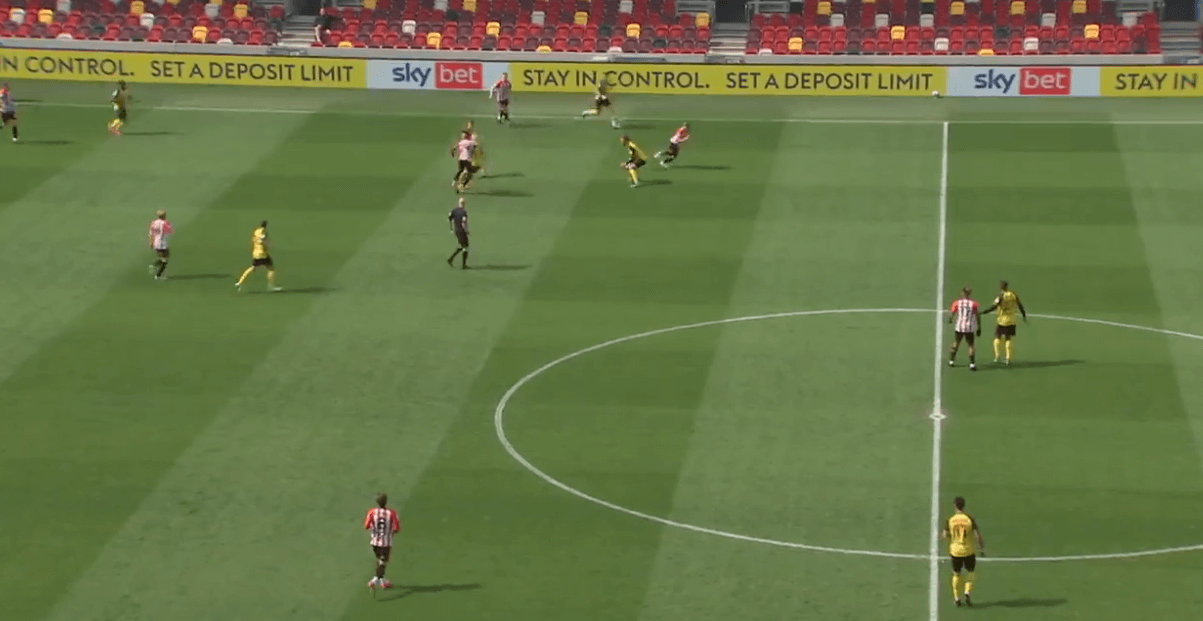 We mentioned horizontality in the Brentford structure. Watford’s compact defence meant that they had to stretch the defence by committing men wide. The far sided wing-back would always position wide. This would give him acres of spatial advantage to deal with. But Brentford never used this advantage to full effect as they would often fail to switch the ball in the match. 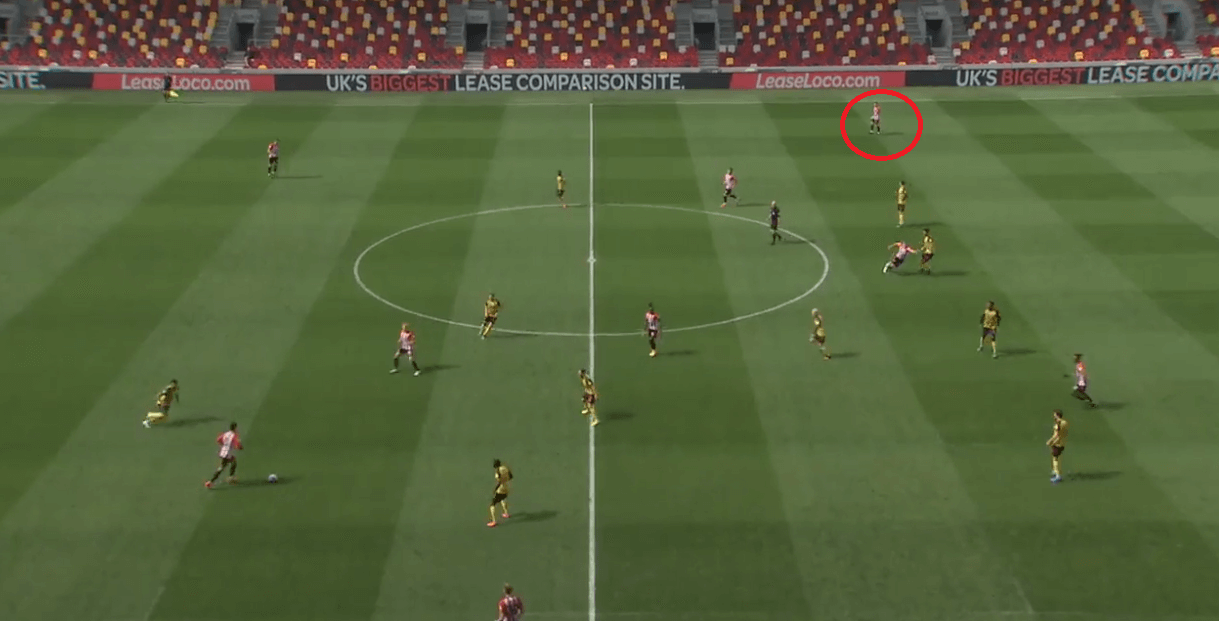 This would have been even more effective because Watford deployed a ball-oriented pressing where they would shift as a team towards the bar sided regions. We can see an example of that in the image below where Watford’s last two lines are very much oriented towards the ball side and a switch means they would have been exposed. We can also say that Watford did well sometimes in these situations to cramp the space and time to not allow the Brentford players to even attempt the switches. 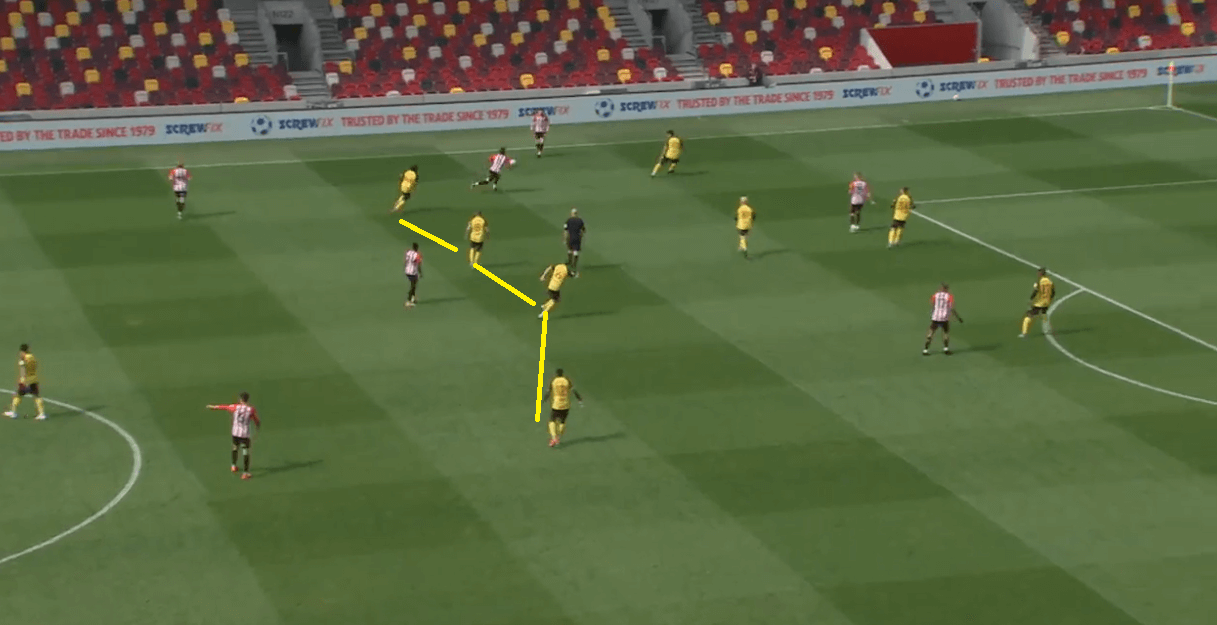 Watford’s press was also broken with another interesting tactical move from Brentford. The CBs were asymmetrically set up with one of the centre-backs going wide and the other two staying slightly central in comparison. Now since the CBs stretched and stayed far from each other meant that the Watford player who had to man-mark them were far from each other and pressing would not be as efficient. In addition to that, they also dropped Jensen deeper to form a 4th player on the backline. The Watford midfielder who marked him cannot press high as that would expose a lot of space in front of the defence. We can see how they are outnumbered in their final line (4v3) and the Watford CF is also not positioned in the right way with his cover shadow not covering the pass to Norgaard. Brentford easily played out from the back due to this.

Another example of when Jensen dropping created advantage is given below. They initially use the GK to create a +1 and then when Jensen dropped (this time marker followed him but was very far to pressurize him). Sema pressed the side keeper keeping the wide centre-back as cover-shadow concerning the keeper but when Jensen dropping opened a new angle for the centre-back to receive, Sema wasn’t able to replicate the same as he couldn’t shift his positioning quickly. 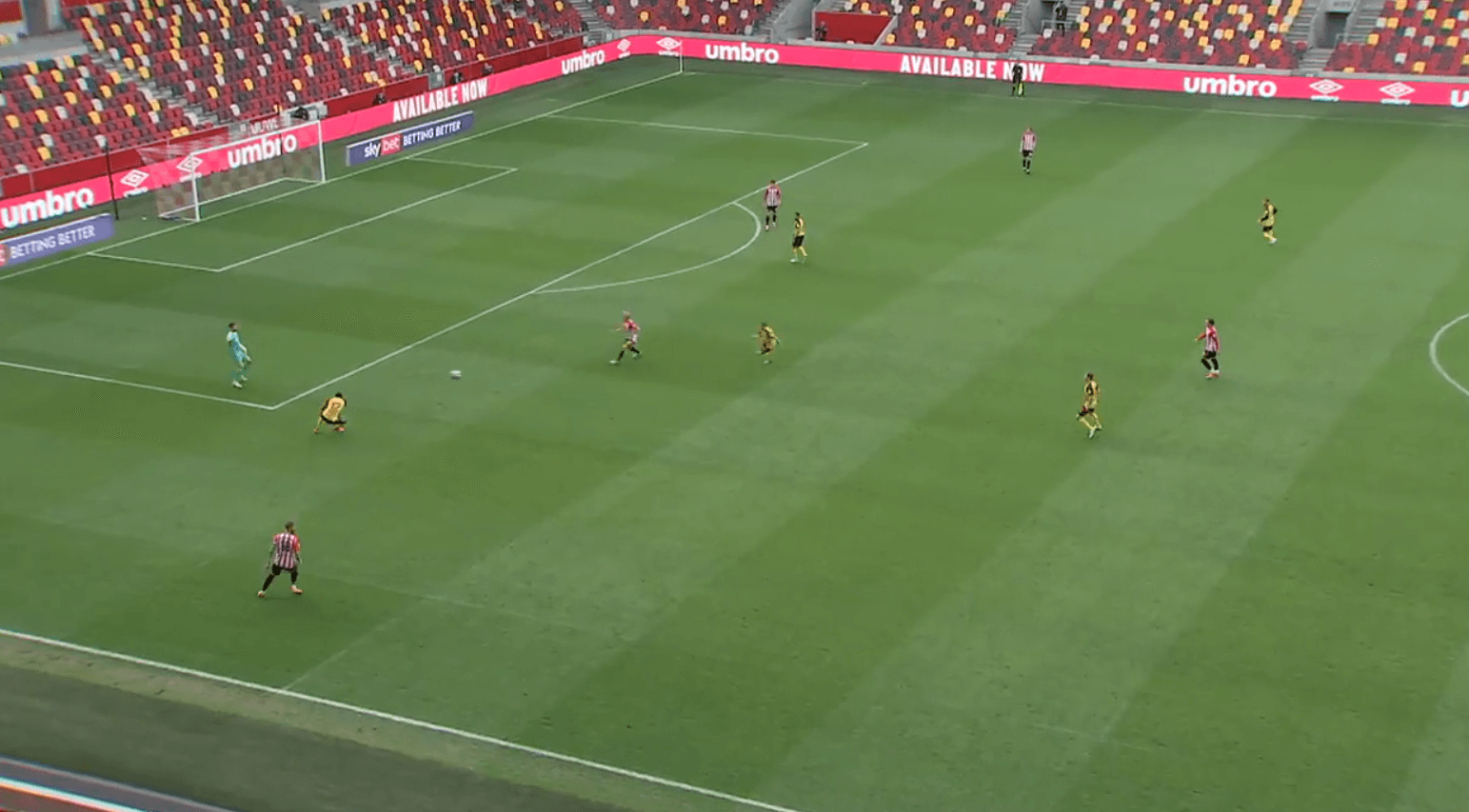 They also started to counter-attack efficiently and attacked the spaces that Watford left open. We can see that in the image below just before one of their goals when the Watford full-back has pushed forward leaving a Brentford player with acres of space in the wings. This means that Hughes had to move out to the wing to cover and that left a huge space centrally which Brentford attacked by making a run. This is the result when your CDM has to move wide and cover for the lack of defensive coverage from your full-backs or wingers (who are left behind). 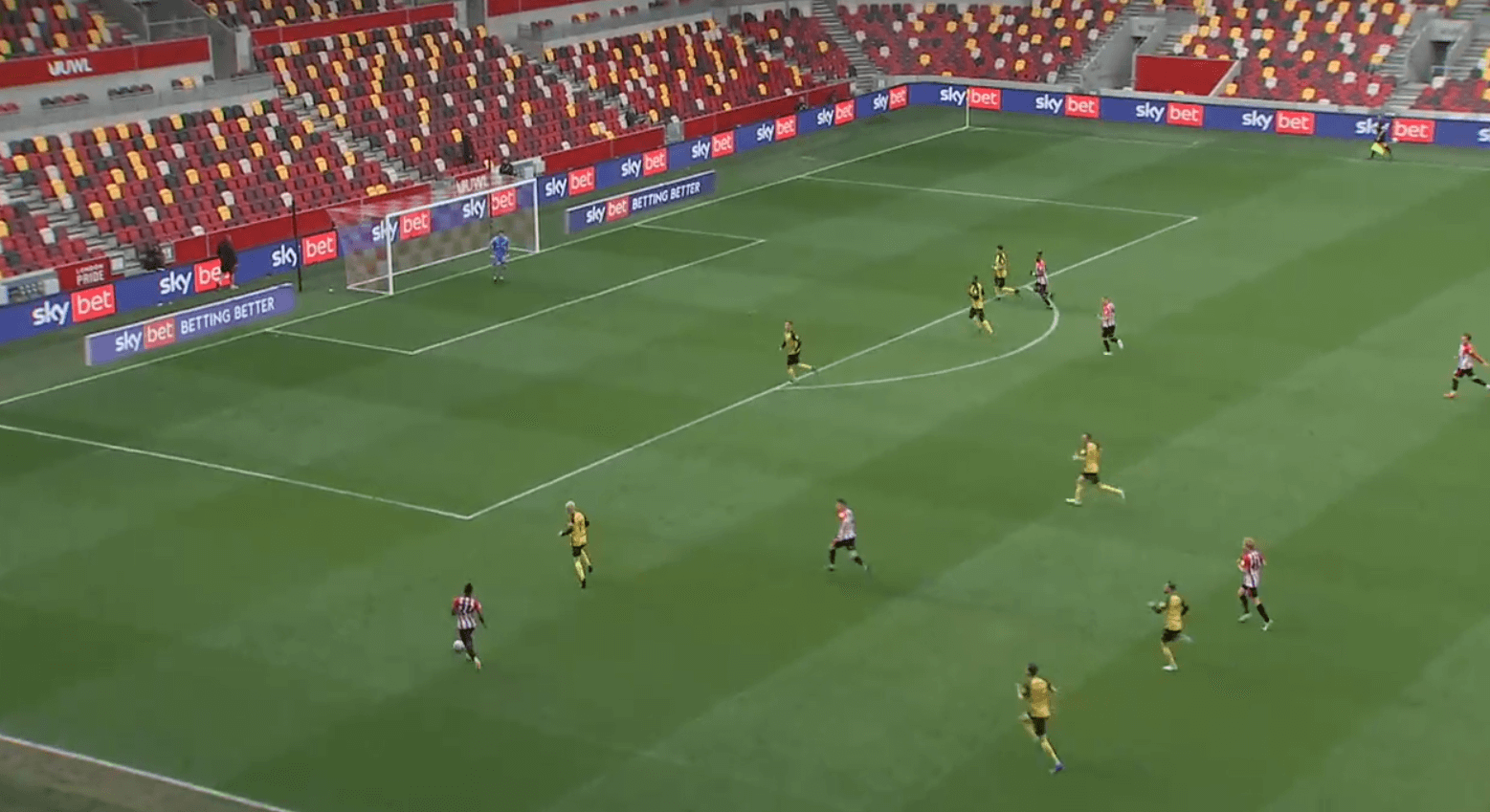 Although Brentford did well to stop Watford’s progression, Watford also had themselves to be blamed for some strange scenarios on the pitch. They lacked principles to build well and move the ball from the middle third to the final third. 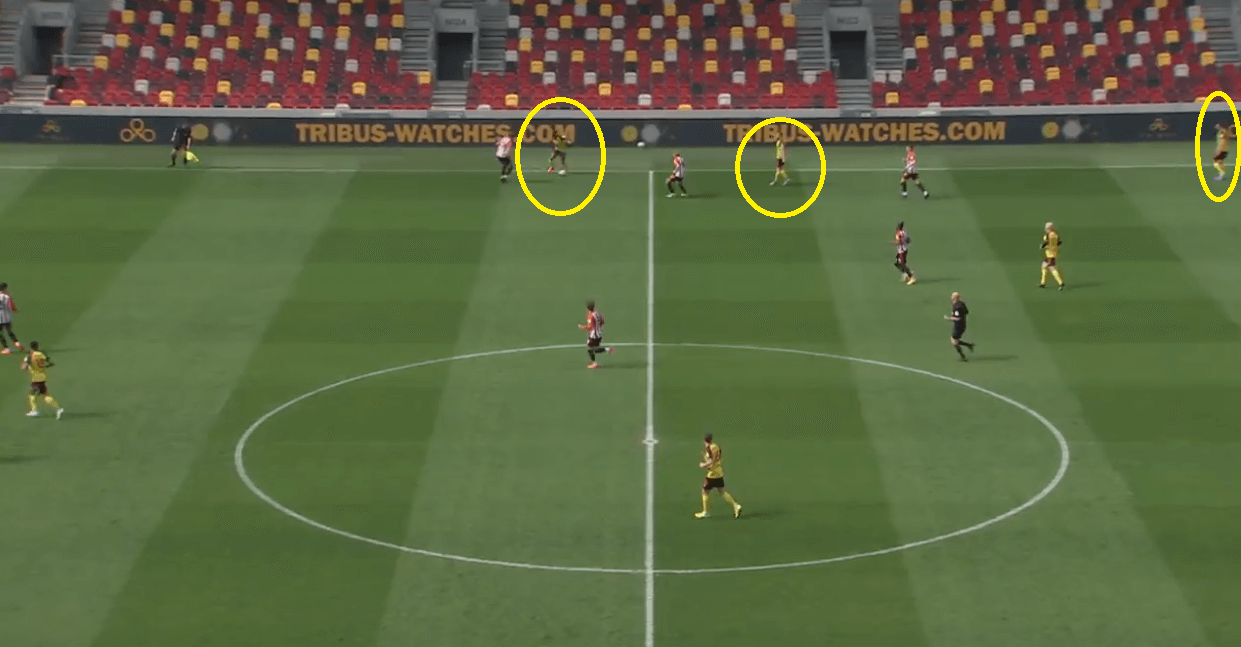 We can see an example of 3 Watford players occupying the same vertical lane on the pitch with no staggering in the above image. This means that the Brentford players can easily press them with less effort and strategies as a cover shadow over another player would take two of them at the same time. This also means none of them can receive from each other as the angle is insufficient also with the touchline acting as a defender. 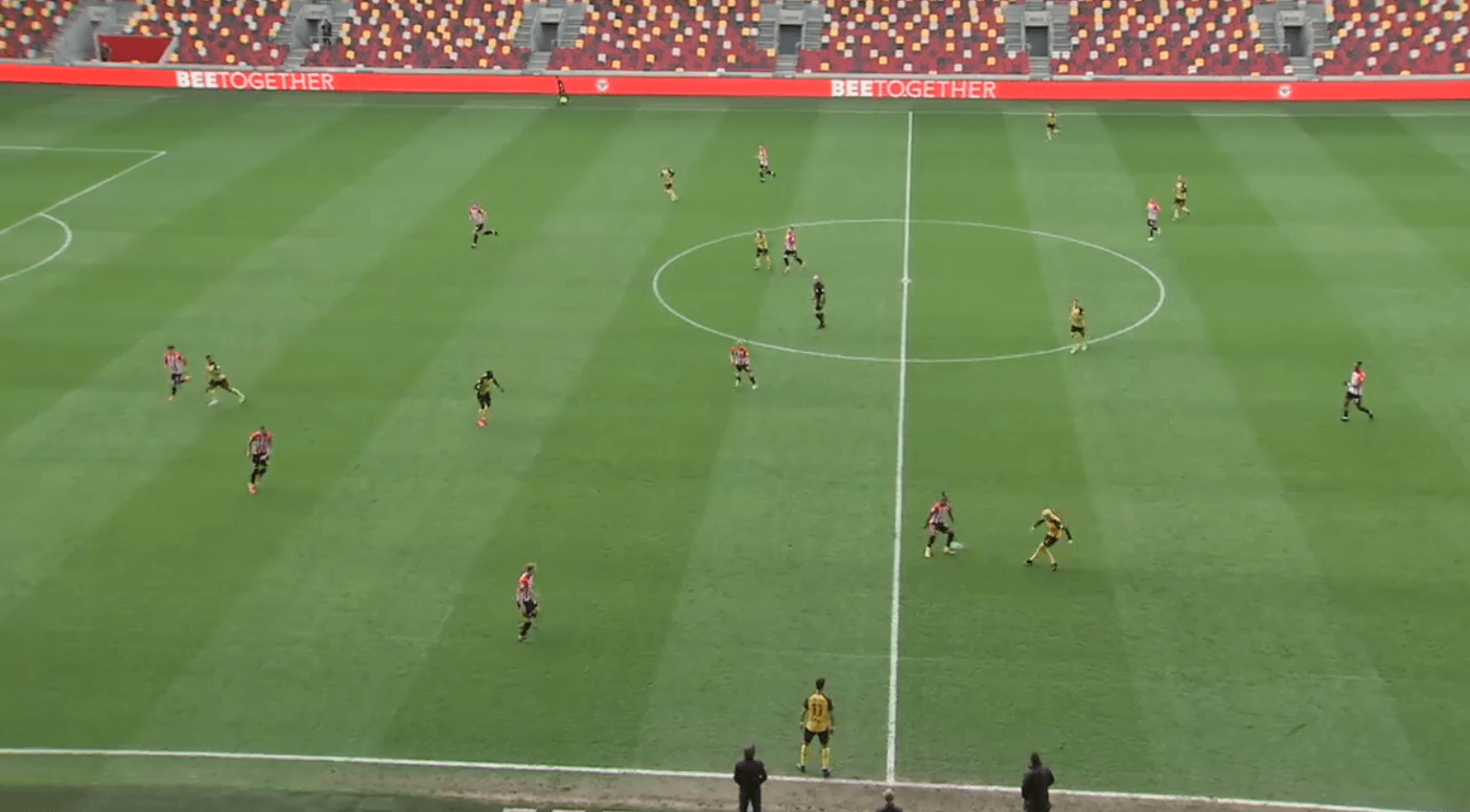 As the game progressed, they dropped Hughes like how Brentford did the same with Jensen. This created a numerical superiority with 2 Brentford players pressing. In the above example, Hughes can now carry the ball forward and with Watford striker making a run that has stretched Brentford horizontally and has created space for Sema centrally to drop. Hughes instead of passing it to his full-backs, who would have given it to Sema as his body angle was much more open to facilitate a pass to Sema, directly attempted a pass to Sema which was easily intercepted. These sets of actions were the reason why Watford failed to threaten Brentford for the majority of the match with some strange decision making.

The result means that Brentford are now in pole position to finish in 3rd place and probably secure a matchup against Barnsley. Watford meanwhile will not bother a lot about his loss as they have already sealed their promotion and would look to go into the Premier League with a bang by securing a win on the final day. While Barnsley would be looking to make history at least this time around to get a chance to play in the 1st division against teams like Chelsea, Manchester United, etc.