With a few fixtures left to play in the Champions League Round of 16, the fight to reach the quarter-finals was still not over for some. Chelsea travelled to Bayern Munich, trailing 3-0 on aggregate but Chelsea would have hoped to get themselves back into the fixture. Hans-Dieter Flick’s Bayern Munich, however, already had a foot in the quarters and were looking to put the tie to bed. A possible quarter-final against either Barcelona or Napoli awaited the two teams and in this tactical analysis, we will look at the tactics of both sides in their fixture. We begin our analysis with the lineups. 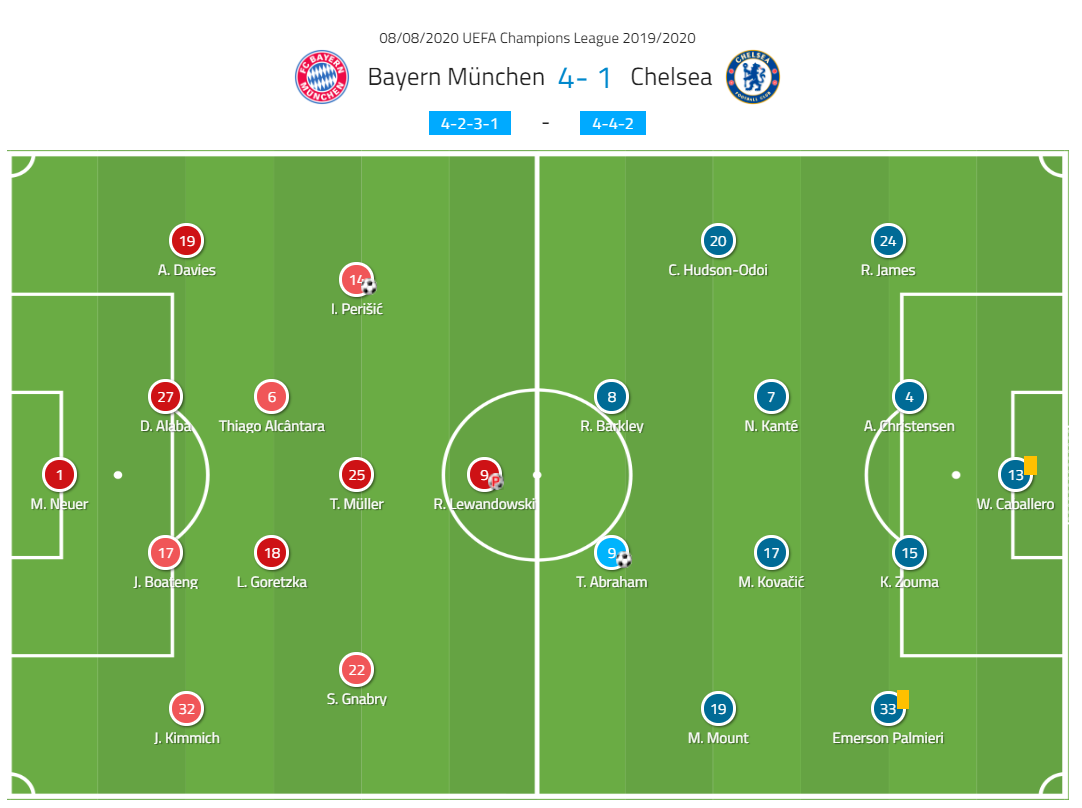 Flick made no changes to his lineup that started the friendly against Marseille and the defensive partnership between David Alaba and Jerome Boateng was looking good. Alaba’s transition to centre-back meant that the young Alphonso Davies could find a regular spot at left-back as well. Thiago Alcântara’s start meant that Joshua Kimmich moved back to his right-back role although he has played, and performed well in, in the centre of midfield as well. Leon Goretzka looked a different player after the lockdown and he retained his spot as well.

Frank Lampard made six changes to his squad from the FA Cup final against Arsenal as Andreas Christensen, Callum Hudson-Odoi, Ross Barkley, Emerson Palmieri, Tammy Abraham, and N’Golo Kanté all started. Injuries to César Azpilicueta, Christian Pulisic, and Willian meant that Chelsea were definitely on the back foot heading into this fixture. 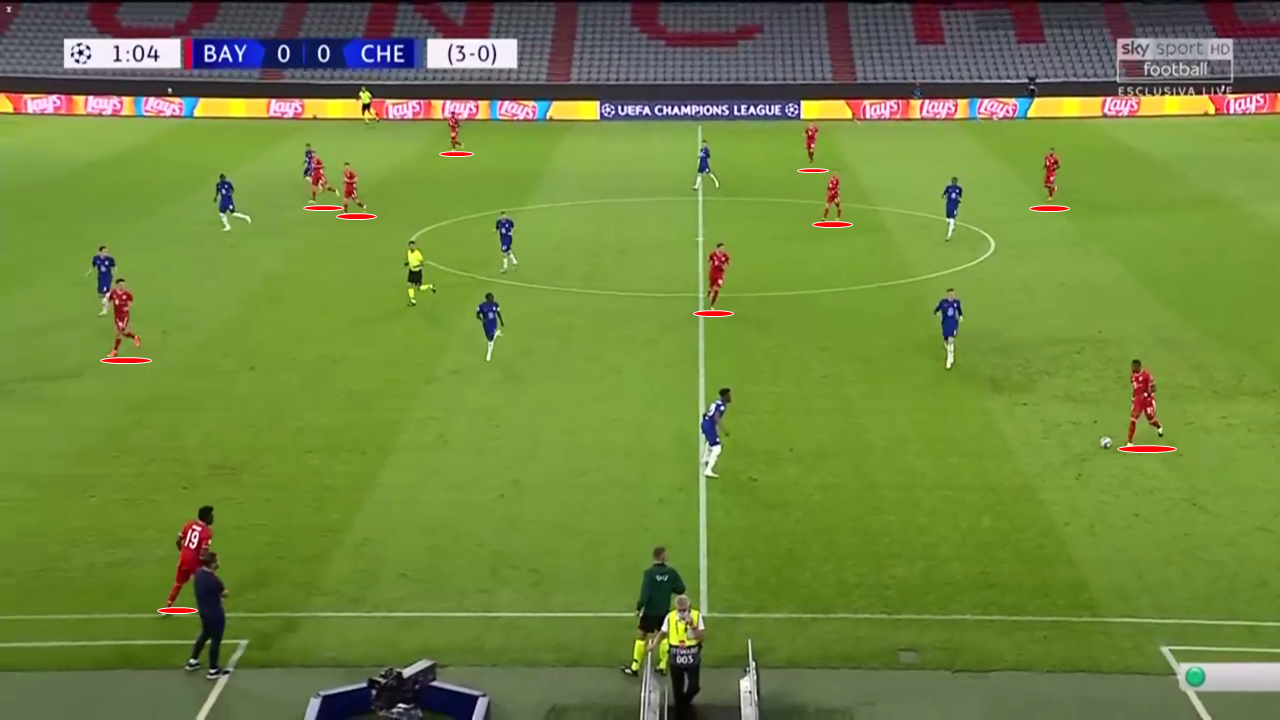 Bayern Munich were in no way looking to just see out the game and immediately looked to push forward. Alaba and Boateng maintained a very high backline and this allowed the likes of Davies and Kimmich to operate higher up the pitch. The two full-backs are impressive in offence and it was clear that Fick’s tactics intended to make full use of that.

The two midfielders in Goretzka and Thiago would stay slightly behind so as to support the centre-backs and this saw Bayern Munich shift into a 2-4-4 formation. Thomas Müller would move up to join Robert Lewandowski while Ivan Perišić and Serge Gnabry would move in towards them, forming a narrow front four. This put pressure on the likes of Reece James and Emerson as they could not move up as much as they would have liked to. 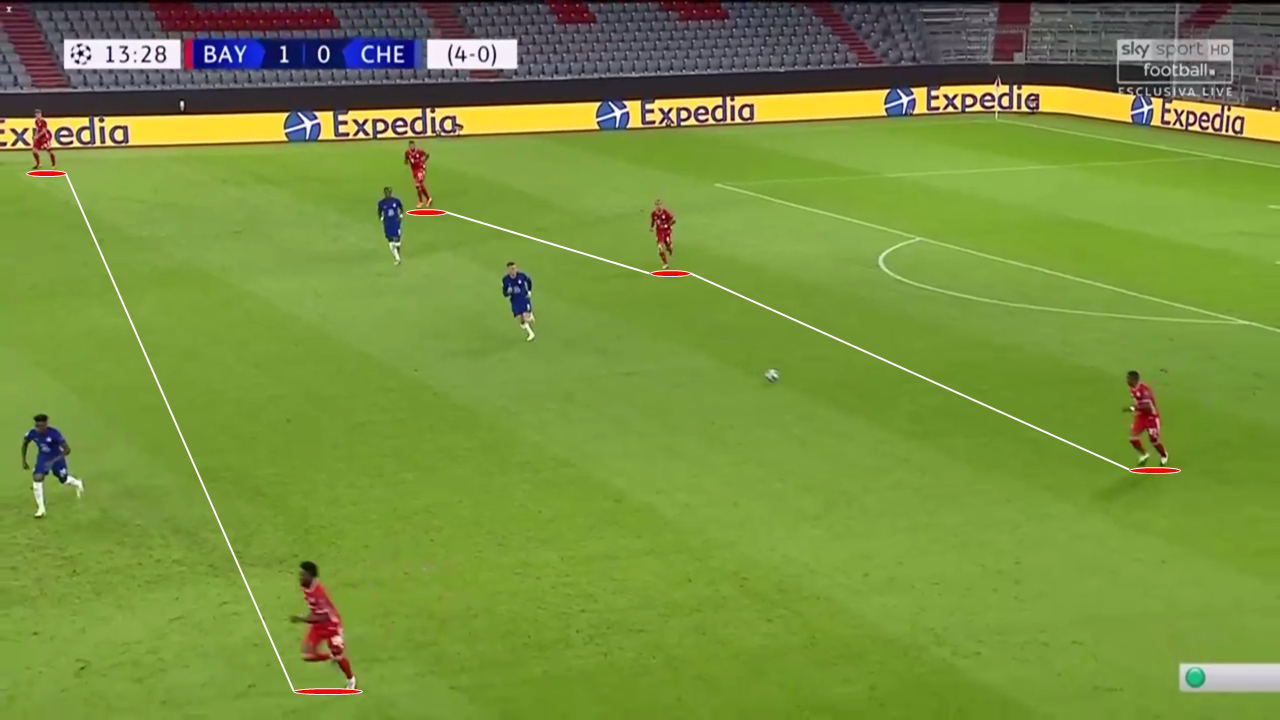 In order to push their full-backs higher, we also saw Thiago drop into the backline in order to form a back three. This allowed Kimmich and Davies more freedom to push forward since their defence was well covered. It also meant that the Chelsea wingers in Hudson-Odoi and Mason Mount could not support the forwards as much in their press since they would create gaps behind them for the full-backs to run into. As a result, Bayern Munich were able to take control of the game early. 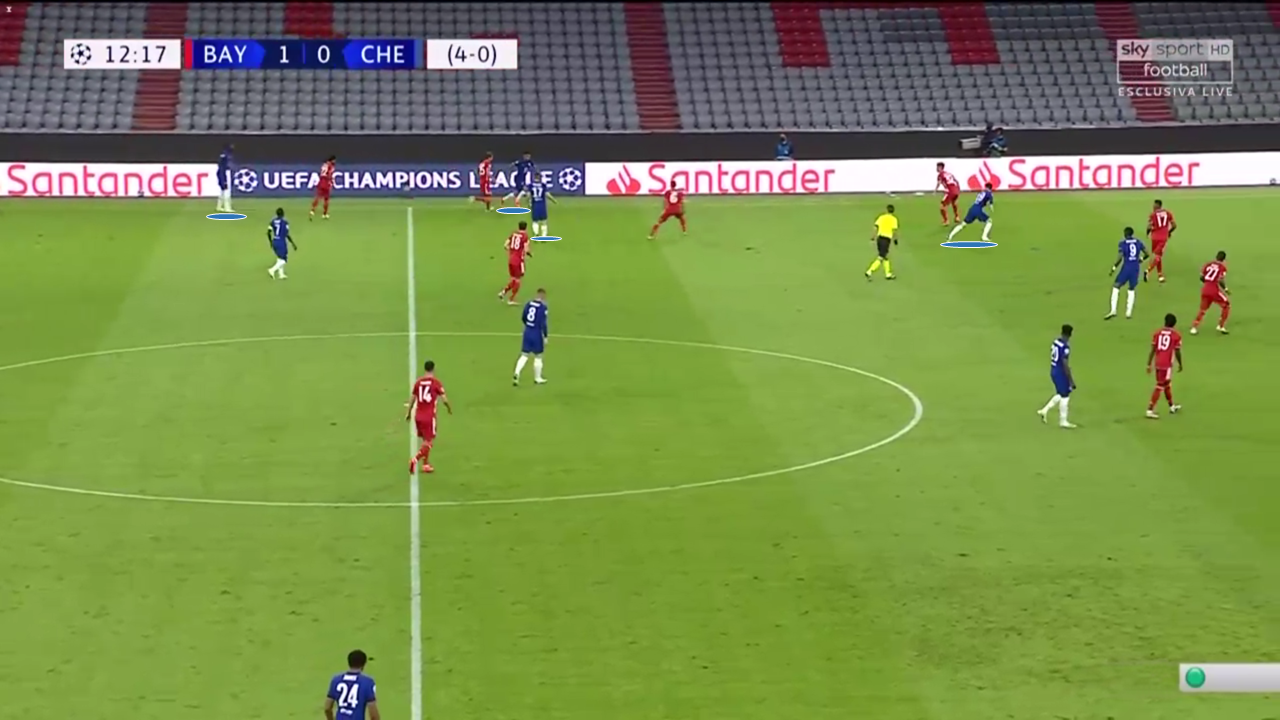 Lampard’s tactics have seen Chelsea operate down the wing and we saw more of the same here as well. Chelsea looked to overload the wings in order to progress the ball forward with the wingers darting down the line. Mateo Kovačić and Kanté would move towards the wing in order to support the full-back while the defence shifted towards that side as well.

They would look to engage in passing combinations before playing their forward through. However, a major issue that they faced was Bayern Munich’s press, which meant that Chelsea could not effectively overload the wings. Bayern Munich would match them in numbers and this greatly reduced the threat of Lampard’s tactics. 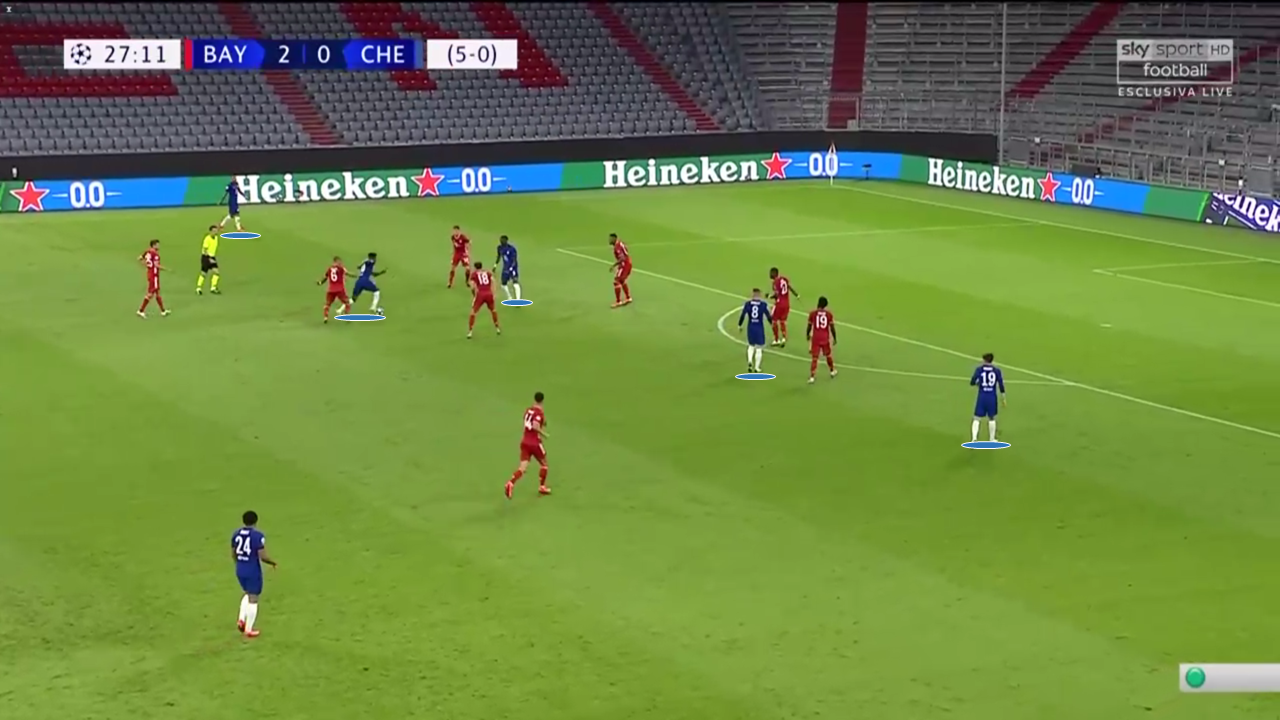 As a result, Chelsea had to change up their tactics and look to cut inward as well. This proved to be much more effective initially, as the Bayern Munich players found themselves out of position and simply looking to defend in numbers. Gaps opened up for the Chelsea players and they almost found a way back when Hudson-Odoi’s smart finish from outside the box found the back of the net but unfortunately for the Blues, was ruled for offside in the build-up.

The new tactics were certainly more effective, however, and it was clear that Chelsea’s best chance to get back into the game was to destabilise the Bayern Munich defenders by swapping up their tactics in this manner. However, Flick’s side eventually adjusted their tactics as well and despite conceding a goal later on, never looked like they were going to be massively troubled. 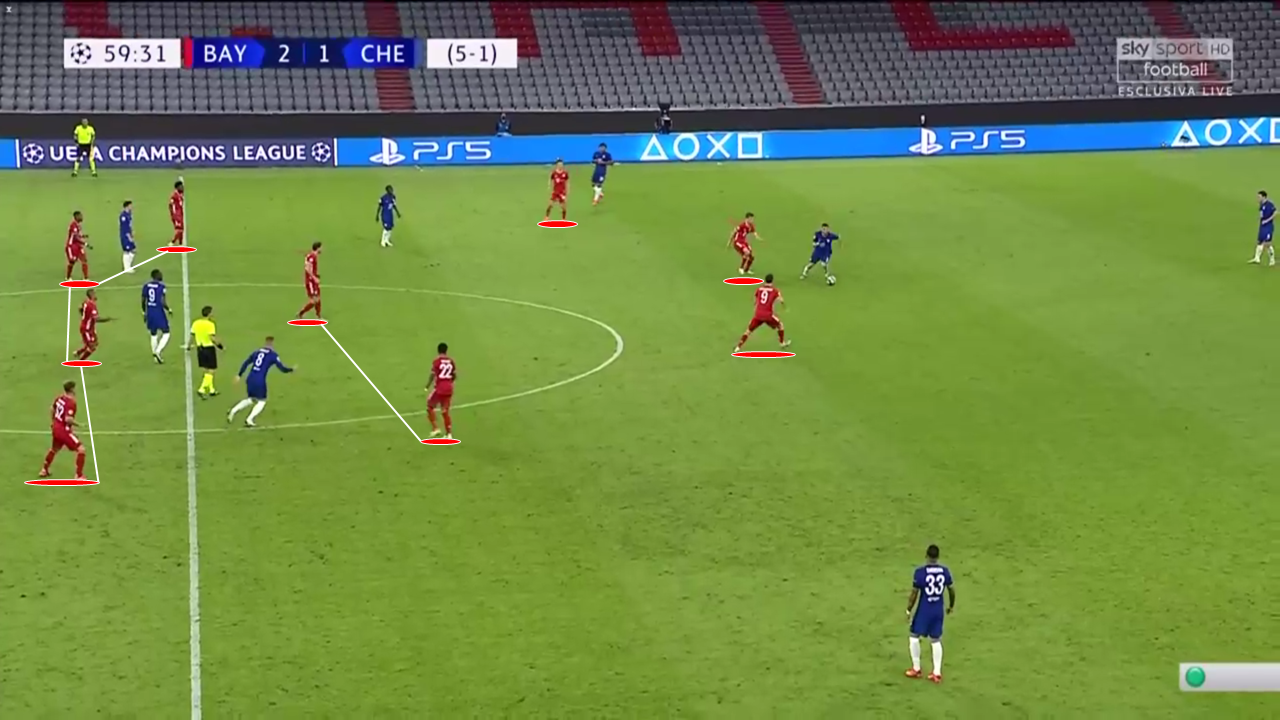 Despite Chelsea’s best efforts to fight back, Bayern Munich always looked to be in the driving seat. They knew that the Blues would need to run riot if they were to win the tie and Flick’s side ensured that they maintained their composure. They maintained their high backline, but this time their full-backs would stay back as well.

The central midfield would stay close to the backline and hence why they maintained a compact structure at the back. The forwards could then press for the ball and in this way, their tactics saw them dominate proceedings off the ball. Chelsea were unable to attack how they wanted to and were constantly shut down by an organised Bayern Munich side. 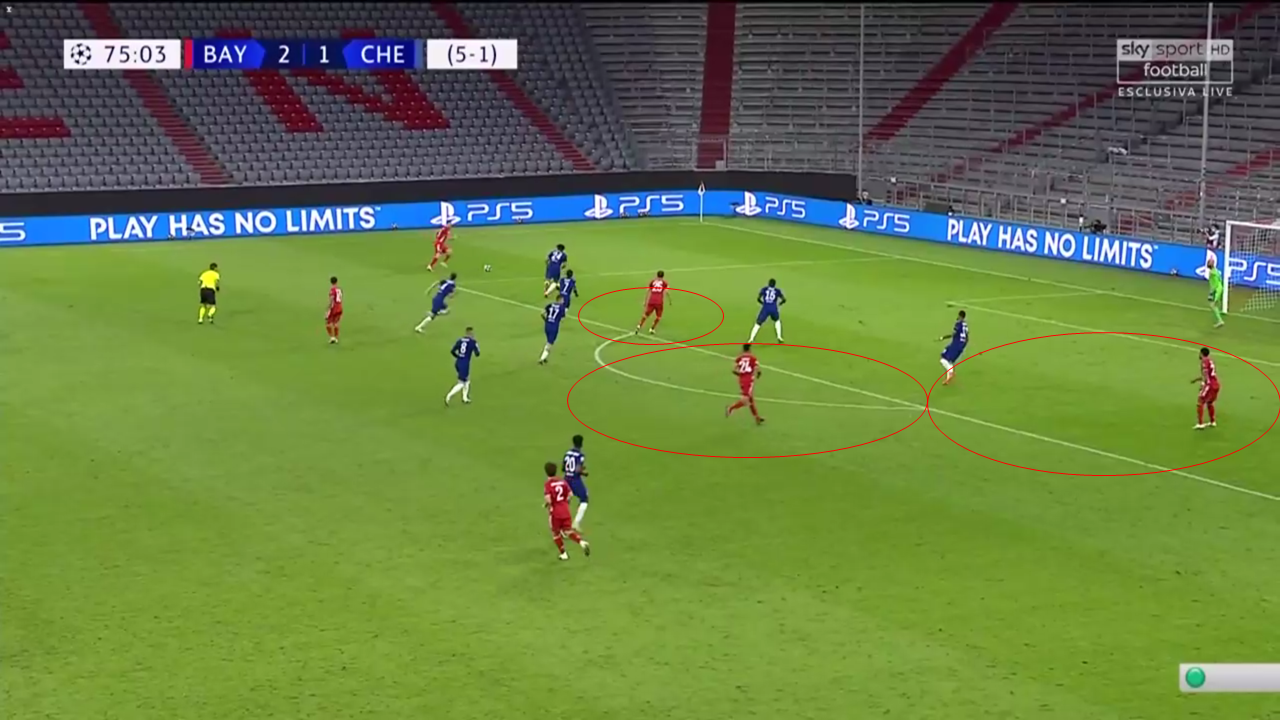 The control over the game meant that eventually the Chelsea side were worn down and this opened up even more chances for Bayern Munich. Despite being 5-1 up on aggregate, they showed no signs of slowing down and made a few substitutions in order to freshen up the squad. Bayern Munich were able to move forward effortlessly and the drop in the effort of the Chelsea players meant that the forwards found themselves with loads of space.

Chelsea’s tactics suddenly shifted to getting numbers behind the ball and when Bayern Munich moved down the wing, the Blues left their players unmarked. They were more focused on the ball and this carelessness meant that all the Bayern Munich players had to do was pick their moments and drift into open spaces. They realised the flaw in Chelsea’s tactics and pushed the ball down the wings in order to deliver crosses to unmarked players in the box. Such constant pressure was always going to be tough for Chelsea to handle and they ended up conceding a further two goals in this same manner. The Bayern Munich attackers were able to get on the end of good crosses and fire home to take the game comfortably.

Chelsea were already missing their key players due to injury and this game was always going to be tough for them. Although they did do well in patches, they were largely outplayed by a strong Bayern Munich and it is back to the drawing board for Lampard who will be hoping to build his squad for next season. The signings of Timo Werner and Hakim Ziyech showed that they intend to push for the top prizes and Chelsea will be hoping that they can get firing on all cylinders next season.

As for Bayern Munich, the 4-1 victory on the day and 7-1 win on aggregate was a real statement of intent and they showed that they were a force to be reckoned with in this tournament. They had already wrapped up the Bundesliga and the DFB Pokal and winning the Champions League would see them complete the treble this season as well. The side has been in good form and their star man Lewandowski has been having a stellar season, scoring 47 goals in 38 appearances. Flick seems to have his tactics set and if they go on at the same rate, there is no reason as to why Bayern Munich cannot go all the way.