In the last match-week of the Bundesliga, champions Bayern Munich were welcomed to the Volkswagen Arena to face Wolfsburg. Oliver Glasner’s side did not have something to play for as well since they had secured a place in the Europa League in their previous fixture against Schalke 04, where they 4-1 away from home. Unfortunately for Wolfsburg, they conceded four to Bayern in this fixture thanks to a ruthless performance from Hansi Flick’s team. Goals from Kingsley Coman, Michael Cuisance, Robert Lewandowski and Thomas Müller gave Bayern a much-deserved win, a microcosm of their triumphant season under Flick. Wolfsburg were unable to score despite having good chances of their own and had to finish the game with 10 men as Joshua Guilavogui was sent off for a second bookable offence.

This tactical analysis will examine the tactics used by both Wolfsburg and Bayern Munich in this Bundesliga match. The analysis will highlight Wolfsburg’s build-up play as well as Bayern in transition and their quality in creating crosses. 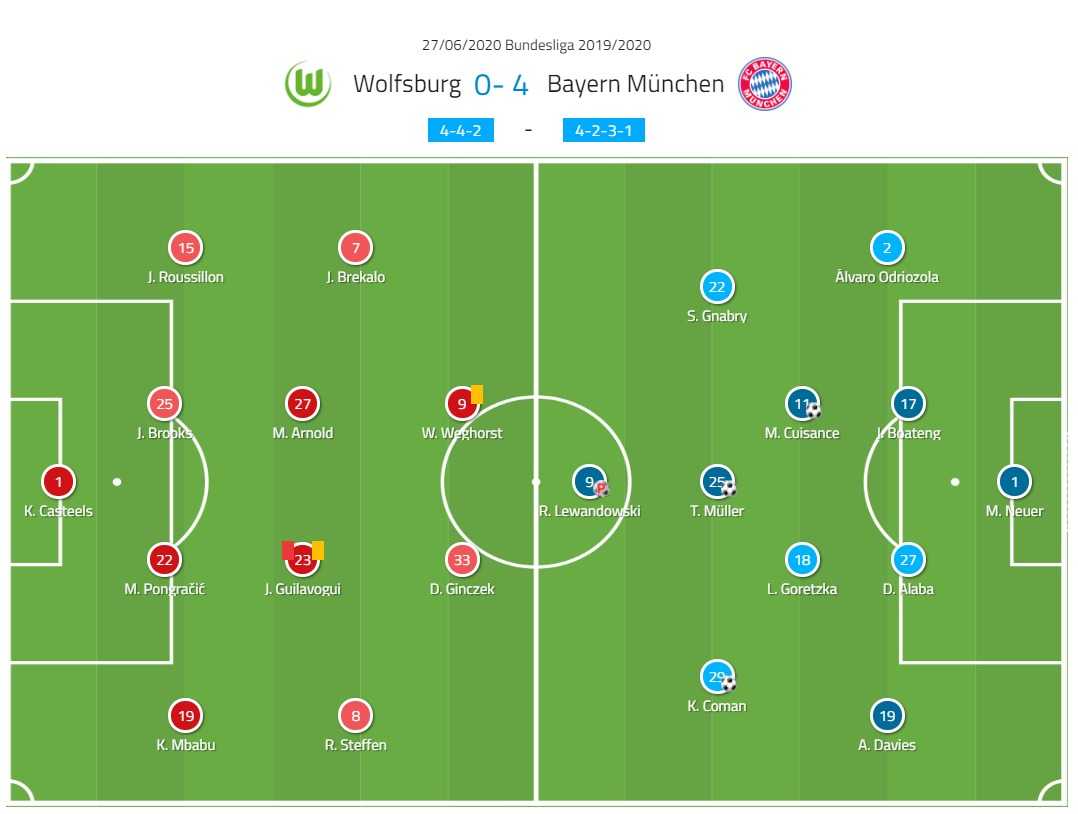 Wolfsburg manager Glasner organised his starting line-up in a 4-4-2 formation. Koen Casteels once again starts in goal with a back four of Jérôme Roussillon, John Brooks, Marin Pongračić and Kevin Mbabu. Joshua Guilavogui and Maximilian Arnold were the central pairing in midfield with Josip Brekalo and Renato Steffen on either side. Towering strikers Daniel Ginczek and Wolfsburg’s top scorer Wout Weghorst completed the starting eleven as a front two.

Bayern began with their familiar 4-2-3-1 formation that they used for the entirety of the fixture. Flick opted for a back four consisting of regular starters Alphonso Davies, David Alaba and Jerome Boateng but included Real Madrid loanee Alvaro Odriozola as the right-back. Leon Goretzka once again started and Michael Cuisance kept his place alongside him after a good showing against Freiburg. The attacking trident for Bayern remained the same as it has for the majority of the season with Kingsley Coman, Thomas Müller and Serge Gnabry all starting. Once again, Bayern’s marksman Robert Lewandowski started upfront as he collected another Torjägerkanone, a title for the leading goalscorer in the league.

After conceding very early on to a Coman goal that came from a lack of concentration on the defensive end, Wolfsburg were already on the back foot. However, Glasner’s team played good football especially in possession throughout the first half. This can be somewhat seen by the fact that Wolfsburg had eight shots in the opening 45 minutes compared to Bayern’s nine. Considering the quality of opposition, this tally is impressive and came down to two reasons as to how Wolfsburg were able to generate these chances: set-pieces and build-up play, and we will look at the latter here.

Wolfsburg used primarily two ways to progress the play and build up the field, with the first being quick switches of play. Given Bayern’s intent on pressing high up the pitch and with numbers, this worked well to get Wolfsburg out of their half. With Bayern tending to double up, once a Wolfsburg player evades the press, it leaves a free player. This can be seen down below and thus, gives the player in possession time to play a long diagonal pass into the wide areas. In this example, Josip Brekalo did well to evade the press and Max Arnold is the one playing the pass into the right-wing. Bayern’s high line means there’s huge space behind the defence and Davies is caught in between two Wolfsburg players. 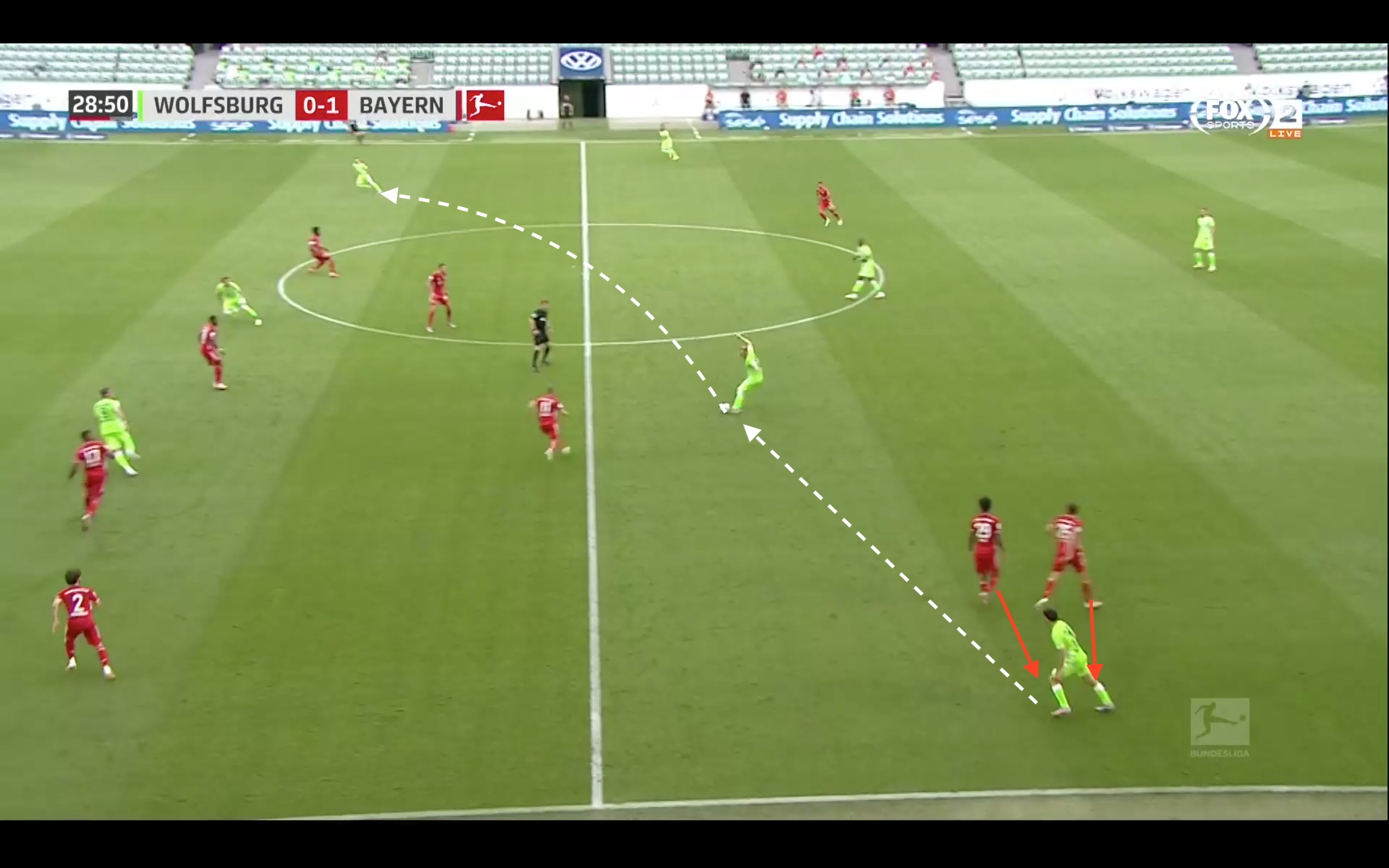 The second and more common way Glasner’s side were able to build-up was having Brekalo come inside from the wing and help outnumber Bayern in midfield. Müller was often closer to Lewandowski than Bayern’s double pivot so that left a 2vs2 in the middle. 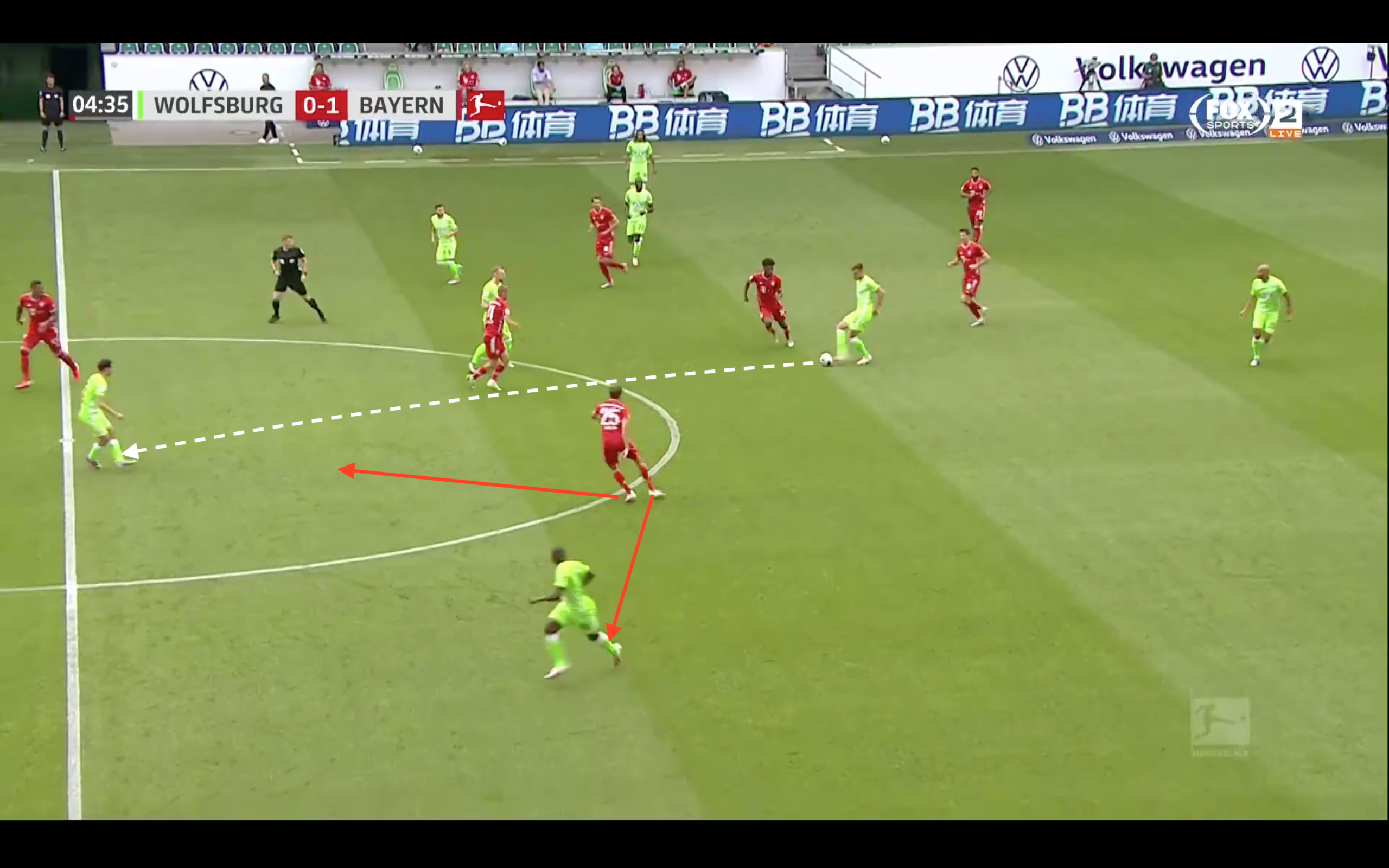 This becomes an issue when Bayern press. Brekalo caused them problems with his positioning, with the winger often positioning himself behind one of the central midfielders. This created a decisional problem for the Bayern midfielders as they would usually have a player in front and behind him, making it hard to press either one or maintain an optimal position. Here, Cuisance has already pressed Arnold and Goretzka is not in his position. Müller recognises Brekalo being open but is slightly too far to close the passing lane and if he attempts to do that, the left-back will be open as well. Since he won’t be able to cover the left-back with his cover shadow and close Brekalo at the same time, it leaves him with a dilemma and he decides to hold his position knowing that he is caught in no man’s land.

Given Wolfsburg’s relative success in their build-up and their compact 4-4-2 shape out of possession in the mid and deep-block, their best chance of scoring would have to come in transition. Wolfsburg have a clear quality disadvantage compared to Bayern in terms of player quality and output, so the chance of being great in possession for the whole game is very minimal.

Wolfsburg played a high line, similar to Bayern’s but not so extreme as Flick’s team, and given the speed of Gnabry and Coman, Bayern’s counter-attacks were extremely threatening. Bayern love to use underlapping or overlapping runs to have a 2vs1 scenario in the wide areas and this can be seen below. 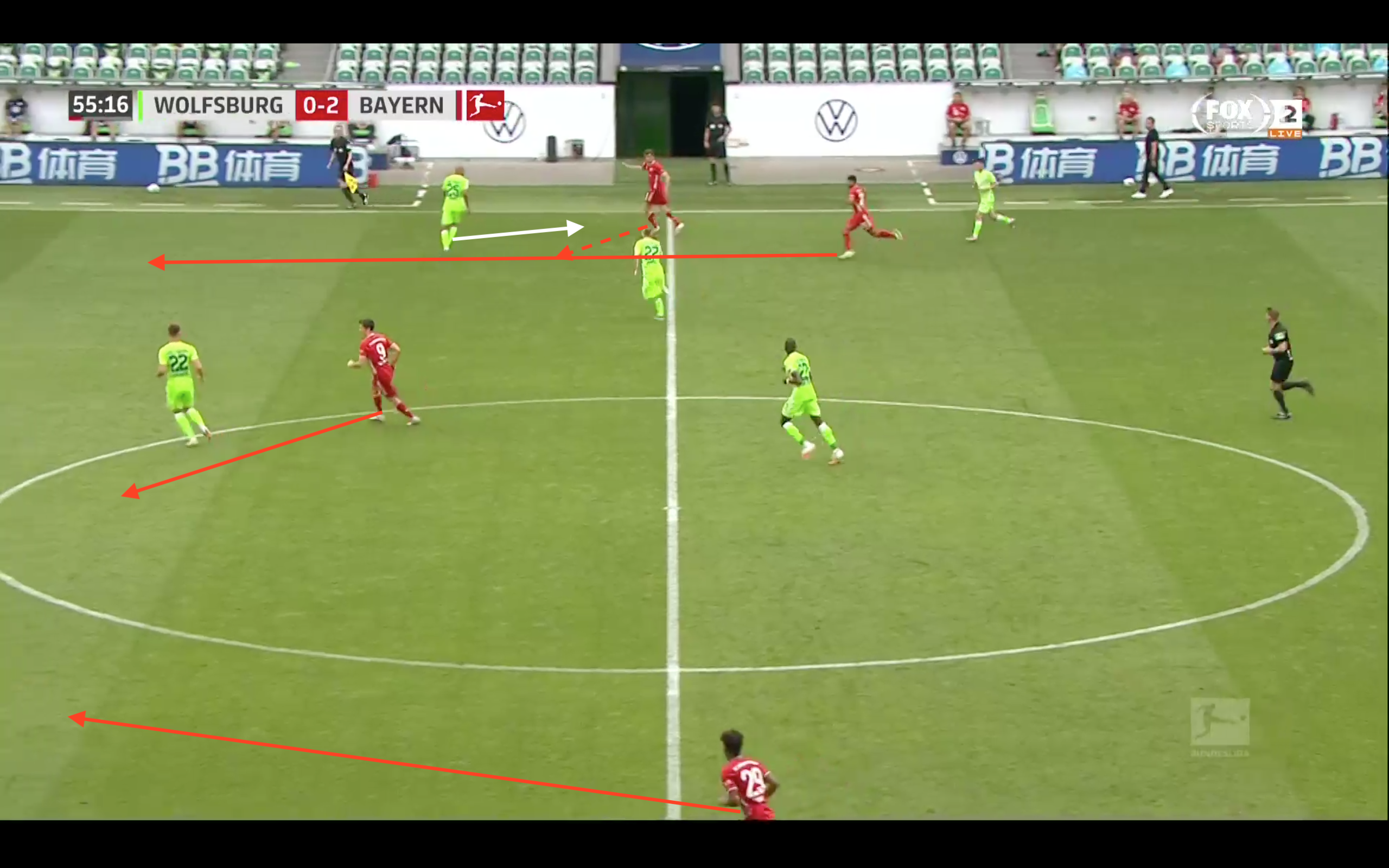 Gnabry makes an underlapping run after losing the Wolfsburg player in his wake thanks to his electrifying pace. Müller stalls brilliantly and sells John Brooks with a superb dummy, which allows Gnabry to make a darting run beyond Müller into space. The speed of the transition causes miscommunication at the back as Brooks presses Müller but Pongračić drops back. With the defensive shape in tatters now, Gnabry has acres of space and has Lewandowski and Coman as potential passing options. In the end, he goes alone and has a good chance that is saved by the keeper.

Wolfsburg’s defensive shape crumbling happened earlier in the match too when they conceded in just the third minute. The two central defenders are on Lewandowski and the left-back is slightly deeper. However, Mbabu is caught too deep and on the wrong side of Coman and is thus, playing him onside when he could have easily prevented that. After a great lay-off by Lewandowski, Müller has the easy task of playing a pass into space behind Mbabu and Coman can go in on goal and score in a move that only had four passes starting from Manuel Neuer. 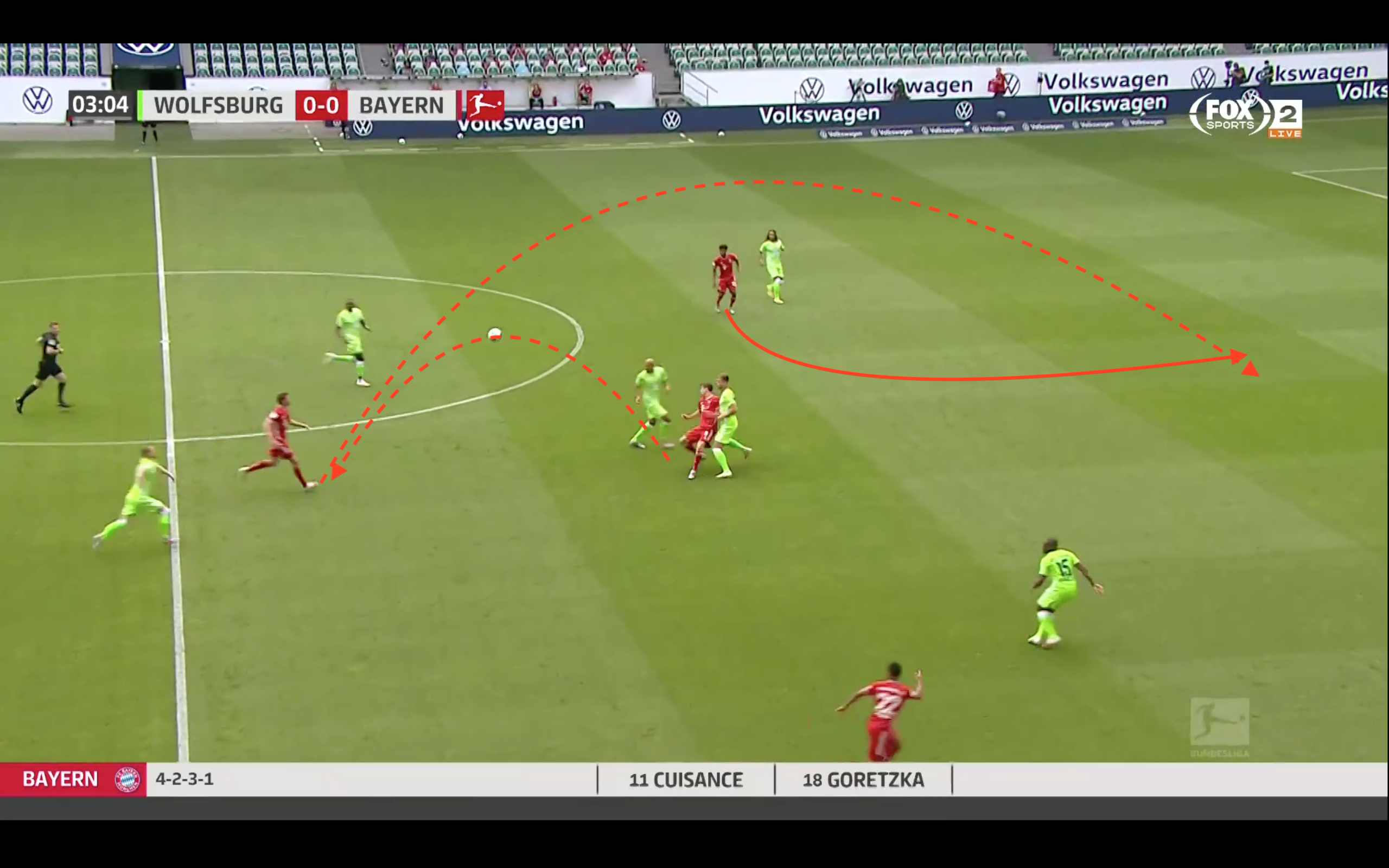 We have already touched on how Bayern like to operate on the wing as they looked to create a numerical advantage in wide areas. As well as that, we have also mentioned Wolfsburg’s narrow and compact 4-4-2 structure that makes it difficult to play through. In addition to elite transition play, Bayern were able to create chances using their crosses. Bayern have some of the best crossers in the league in terms of accuracy in the full-back and winger positions. Therefore, it should come as no surprise that they are second in the league behind Frankfurt in crosses from open play. The most notable player is Coman, whose game is based on beating a defender and putting the ball into the box. He rarely requires a marauding full-back, he does have the option in Davies though, as his ability to beat a man one on one is superb.

In this fixture, however, players such as Odriozola, Gnabry and Perisic proved to be more effective. Below is an example of the Spaniard’s ability to deliver the ball in to the box. The image won’t show the build-up to how Odriozola became open though. Coman was able to take the attention of Roussillon after trying to take him on and that left space for the right-back who was found by Cuisance. 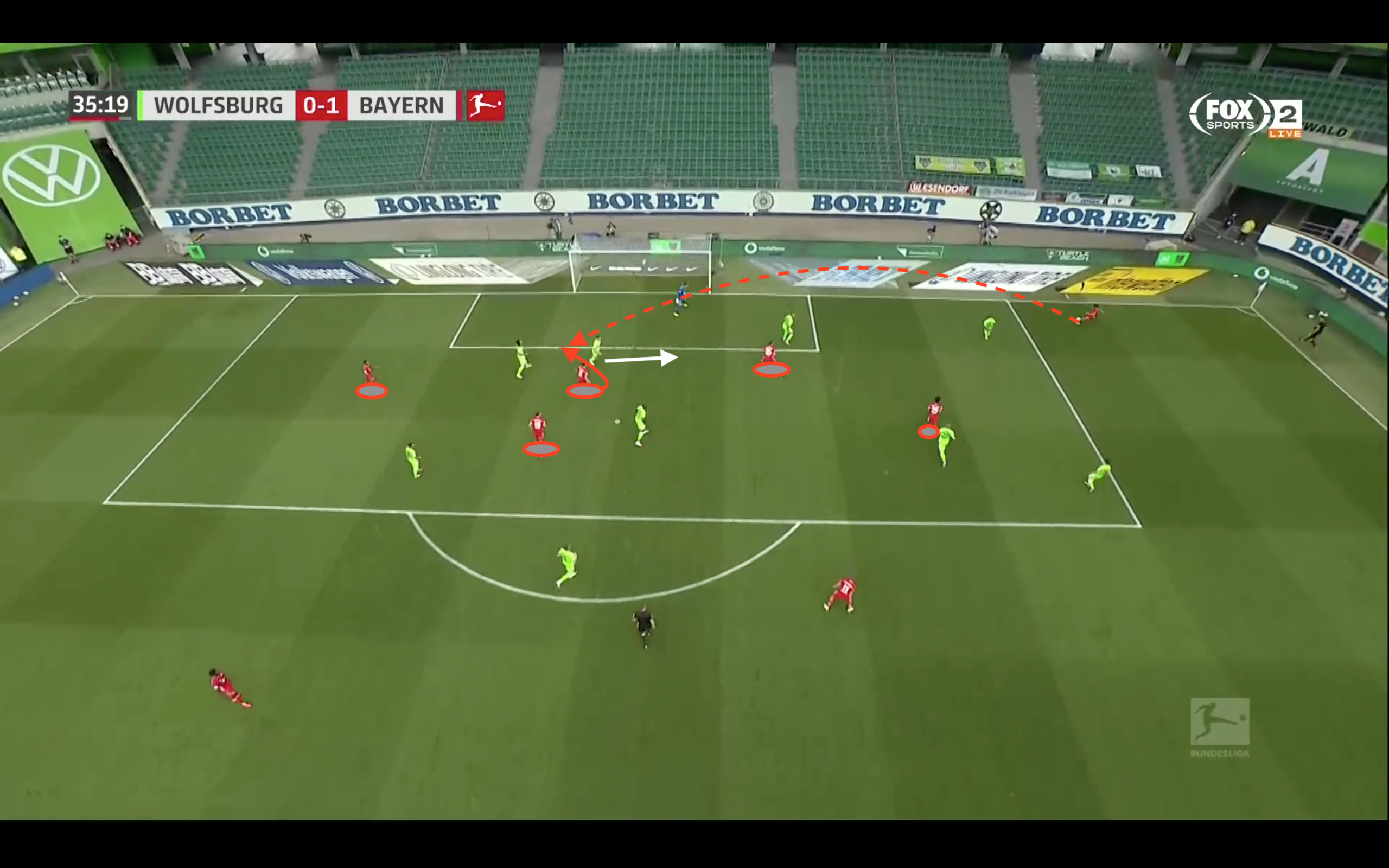 It is a very simple but often repeatable manoeuvre as it means Odriozola becomes free and Bayern can have five players in the box. Lewandowski takes a step to the near post, which the defender on his right recognises, but makes a quick move in-behind the defender to create space for himself. The delivery is on point, as was the Pole’s movement, but the striker’s header was well saved by the keeper.

The example below is one that shows more intricate passing in the build-up to the cross. The move also does not happen on the touchline but in the left half-space, which Perisic is occupying. Lewandowski receives the ball from Müller, who makes a move into the penalty area after the pass. The striker plays it to Coutinho, who then plays an easy pass into Perisic, who is open after the defender in between Perisic and Müller doesn’t know who to close down. The fluid movement and passing from Bayern puts Perisic in a position to fire a cross across goal but the ball is hit too hard for Lewandowski to have a tap-in. 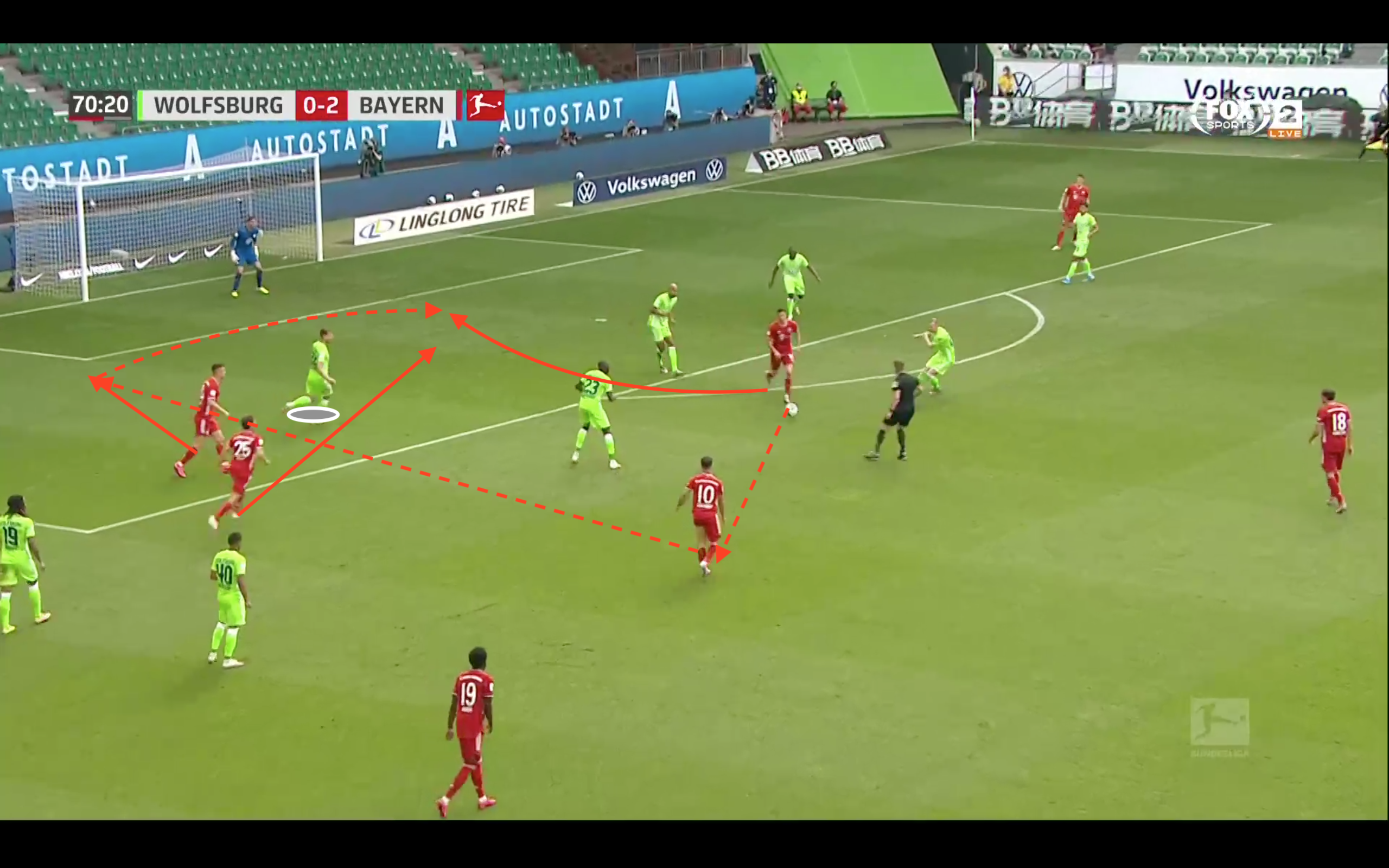 The low cross or cut-back is a move Bayern are superb at and has been a staple in their game since Pep Guardiola arrived back in 2013. Again, it’s a highly repeatable move which makes it extremely dangerous and difficult to defend. Wolfsburg did end up conceding the fourth goal via deep ball from Perisic but Bayern could have had more had they converted these chances from close-range.

Wolfsburg played better than the scoreline or even expected goals (0.95 vs 2.52) suggested but were undone by sloppy defending for the first goal and a wonder strike from Cuisance for the second. A red card and a subsequent penalty was the nail in the coffin for Glasner’s team but they made Bayern work for their last win of the campaign.

The season is now over for Wolfsburg but Bayern still have to face Bayer Leverkusen in the DFB Pokal final and Chelsea in the second leg of their Champions League tie. It was another good performance from Flick’s men, who have now gone unbeaten in 25 games in all competitions under the German – a tally surpassing the record set by Guardiola. The quality and tactics on show were great as usual and their form and performances of late suggest that the Bavarians have a strong chance of winning the treble.