Game week 38 of the English Premier League was by no means a dead rubber, with many crucial spots still yet to be decided. The battle for relegation was tight while the race for qualification for the Europa League and Champions League was sure to go down to the wire. In this important fixture, Wolves travelled to Chelsea in the hope of securing their spot in next season’s Europa League. Chelsea on the hand had to avoid defeat in order to edge either Leicester or Manchester United and secure their place in the Champions League. In this tactical analysis, we will look at the tactics of both Chelsea and Wolves and our analysis will show how their tactics evolved through the game. Without further ado, let us begin. 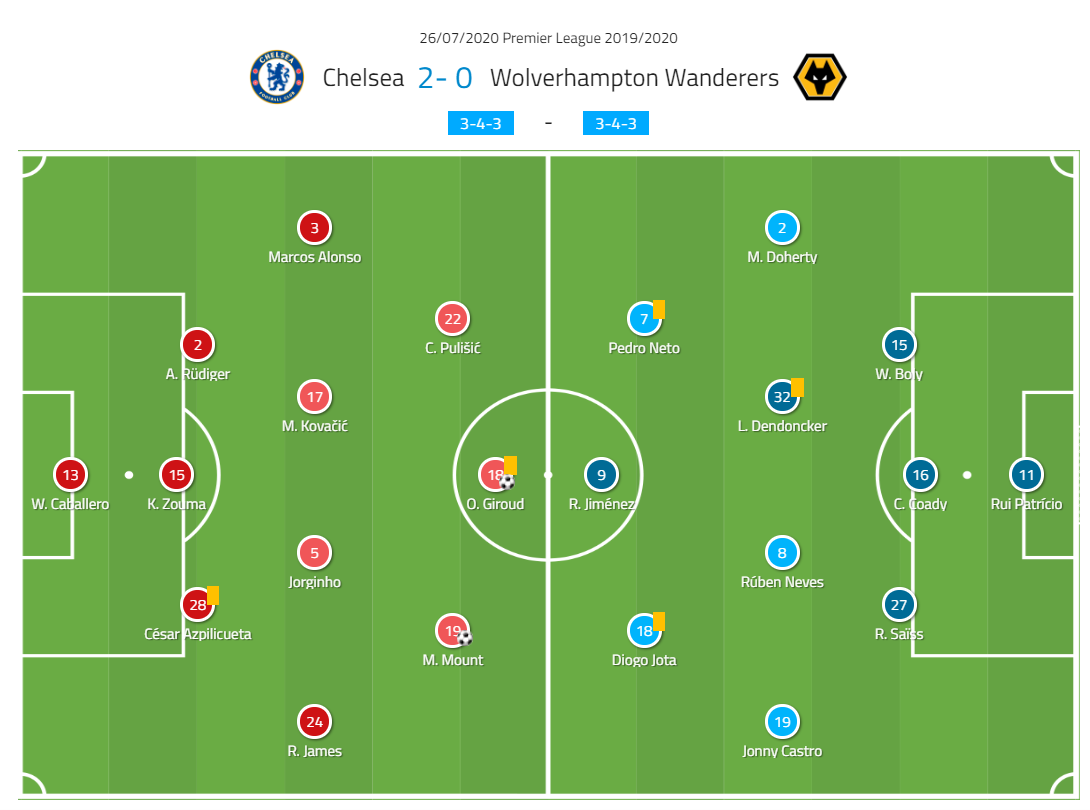 Frank Lampard made two changes to the side that lost to Liverpool earlier in the week, most notably dropping the world’s most expensive goalkeeper, Kepa Arrizabalaga, in favour of Willy Caballero. Arrizabalaga had been having one of his worst seasons, with his domestic save percentage of 54.5% being the worst in Europe’s top five leagues. Further up the pitch, Christian Pulisic started after his impressive performance off the bench earlier in the week. Willian made way for the 21-year-old with his injury keeping him out of the squad.

The visitors made three changes from the squad that beat Crystal Palace, with Romain Saïss, Pedro Neto and Diogo Jota replacing Daniel Podence, Adama Traoré and João Moutinho. Saïss slotted into the back three and this meant Leander Dendoncker moved up into midfield. Wolves would be looking to their talismanic striker Raúl Jiménez to add to his impressive tally of 17 goals this season in order to seal their spot in next season’s Europa League. However, it was evident that although Nuno Espírito Santo had stuck to his 3-4-3 formation, this squad was set-up to be more defensive than his previous lineups. 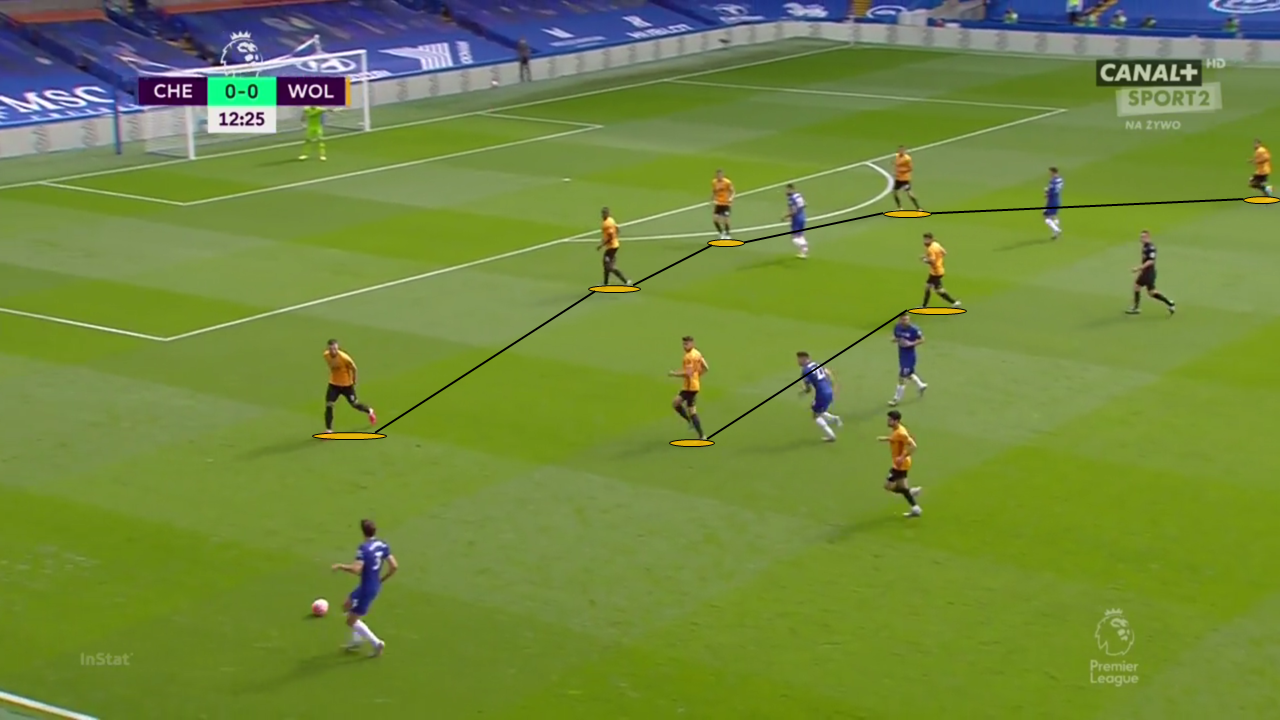 From the start, it seemed clear that Wolves were comfortable sitting back and allowing Chelsea the possession. Though some of the early chances did fall to them, Santo’s side looked to maintain a compact defensive structure with his initial 3-4-3 formation shifting to a 5-2-3. The wingers in Neto and Jota did fall back but not to a great extent as Wolves looked to hit Chelsea with pace on the counter. Hence the onus was on Rúben Neves and Dendoncker to stay compact with the backline in defence. The wing-backs would also engage the attackers in a more central position rather than on the touchline as they looked to prevent Chelsea from splitting any gaps in the defence. 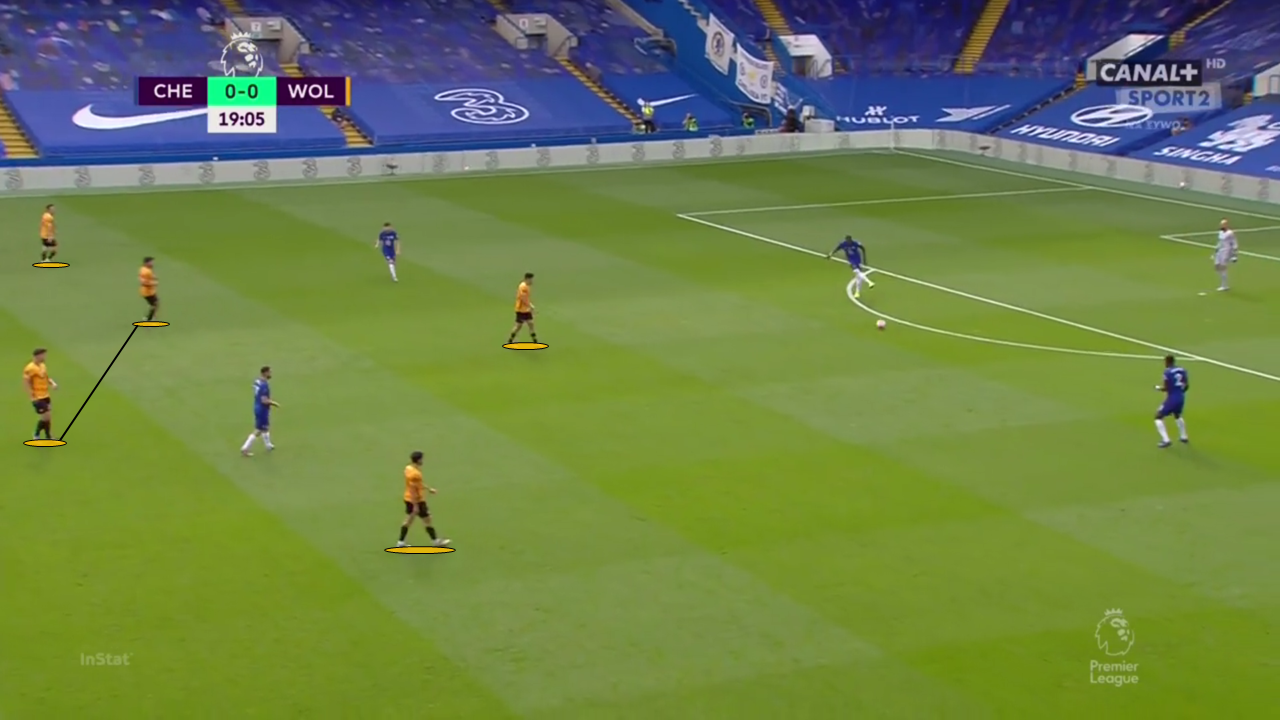 The duo of Neves and Dendoncker were crucial in pressing higher up the pitch as well, as they moved forward to cut off the passing options to Chelsea’s midfielders. Wolves’ tactics meant that they looked to engage in a low-intensity press, where instead of hunting down the player with the ball, they looked to hold their positions and cut off the passing lanes to force the opposition into areas that they can defend easily. This did mean that the midfield duo had to be extremely disciplined as any error in positioning could mean that Chelsea would bypass them and attack their centre-backs. 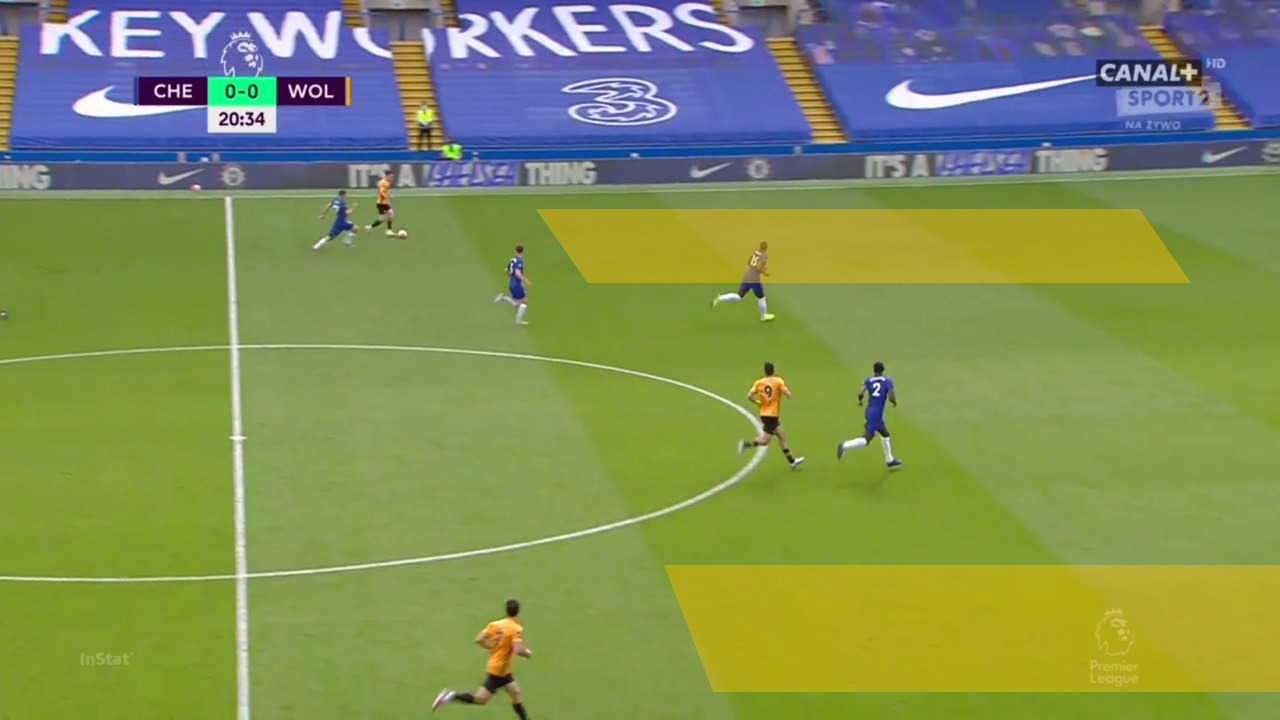 As mentioned earlier, Wolves looked to hit Chelsea on the counter and these tactics are shown above. The front three staying forward meant that they could attack the spaces in behind Chelsea’s wing-backs and this posed a greater threat for the Blues. This meant that Mateo Kovačić and Jorginho had to stay behind to provide support for the defence while the wing-backs moved forward, hence preventing Chelsea from attacking through the centre as they would be on the back foot should possession be quickly overturned. Chelsea’s tactics of playing both César Azpilicueta and Reece James meant that they effectively had two right-backs in the game. Though Azpilicueta started as the third centre-back, he looked to occupy wider positions and pretty much playing as a right-back in a back four. This saw Chelsea shift formations between their initial 3-4-3 to a 2-4-4 with James pushing forward to join the front three and Marcos Alonso played just ahead of the centre-backs. With Wolves pushing Chelsea out wide, these tactics meant that they could effectively overload the wings. 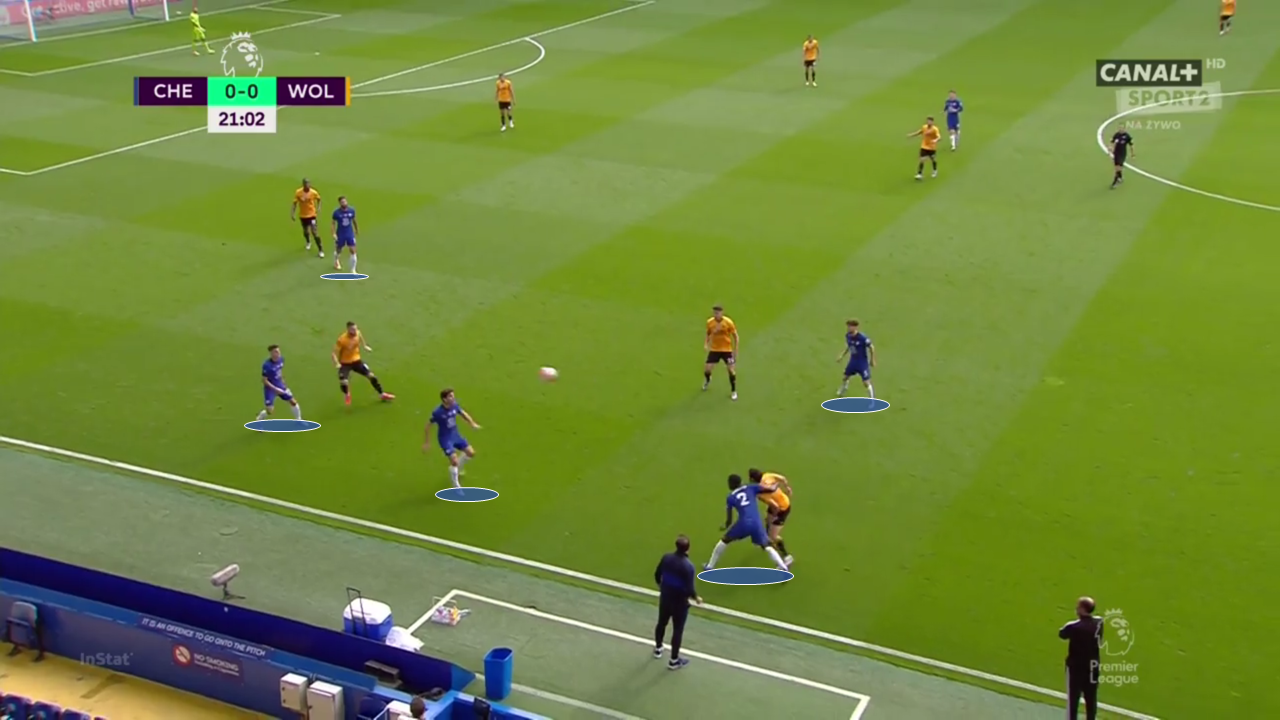 In the image above, we see Chelsea overload the wings on the opposite side as well. Their shifting backline meant that sometimes Antonio Rüdiger could push forward to support Alonso on the left-hand side. With Olivier Giroud and Jorginho moving in for support as well, Chelsea could effectively overload the left-wing. 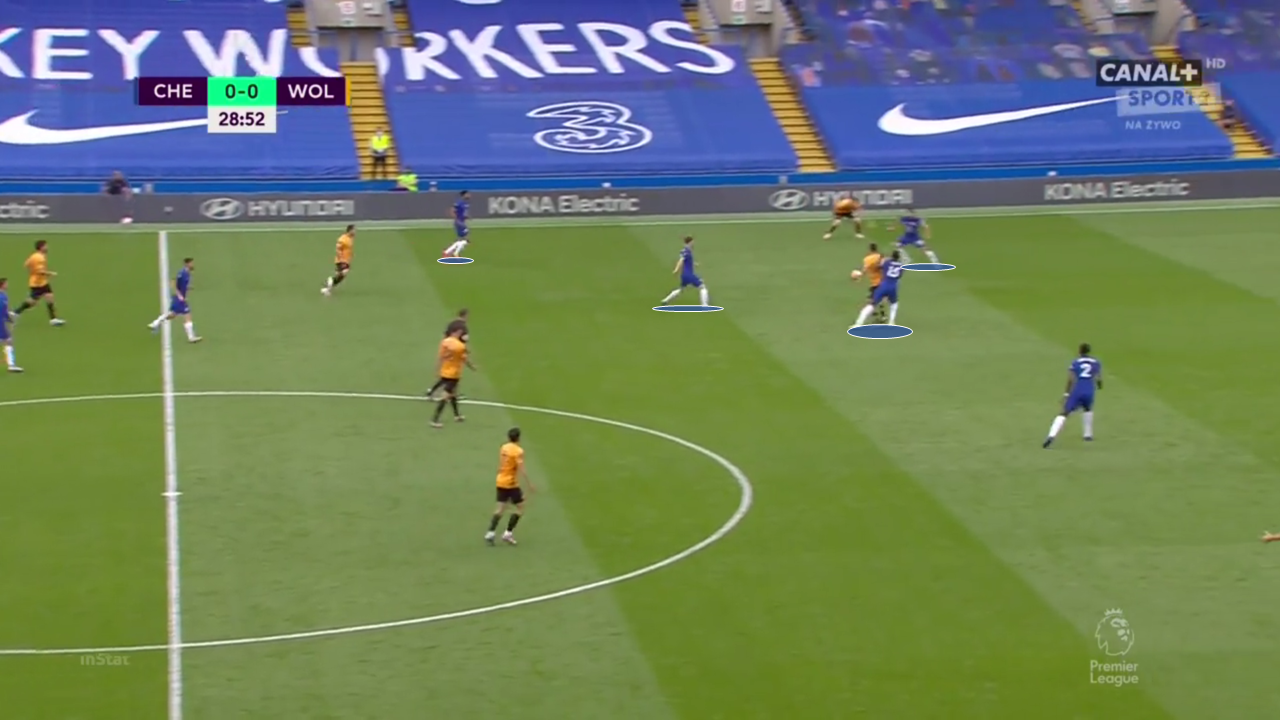 A similar case is seen on the right-wing as well, with Chelsea looking to overload the wings in order to win the ball back. James would trackback to support stand-in right-back Azpilicueta while Kovačić or Jorginho would move in to support them. Kurt Zouma could also follow the run of the forward and cut off the passing option to him. Such tactics effectively kept Wolves’ attack at bay as they had set out to make use of space down the wing in order to launch counter-attacks. 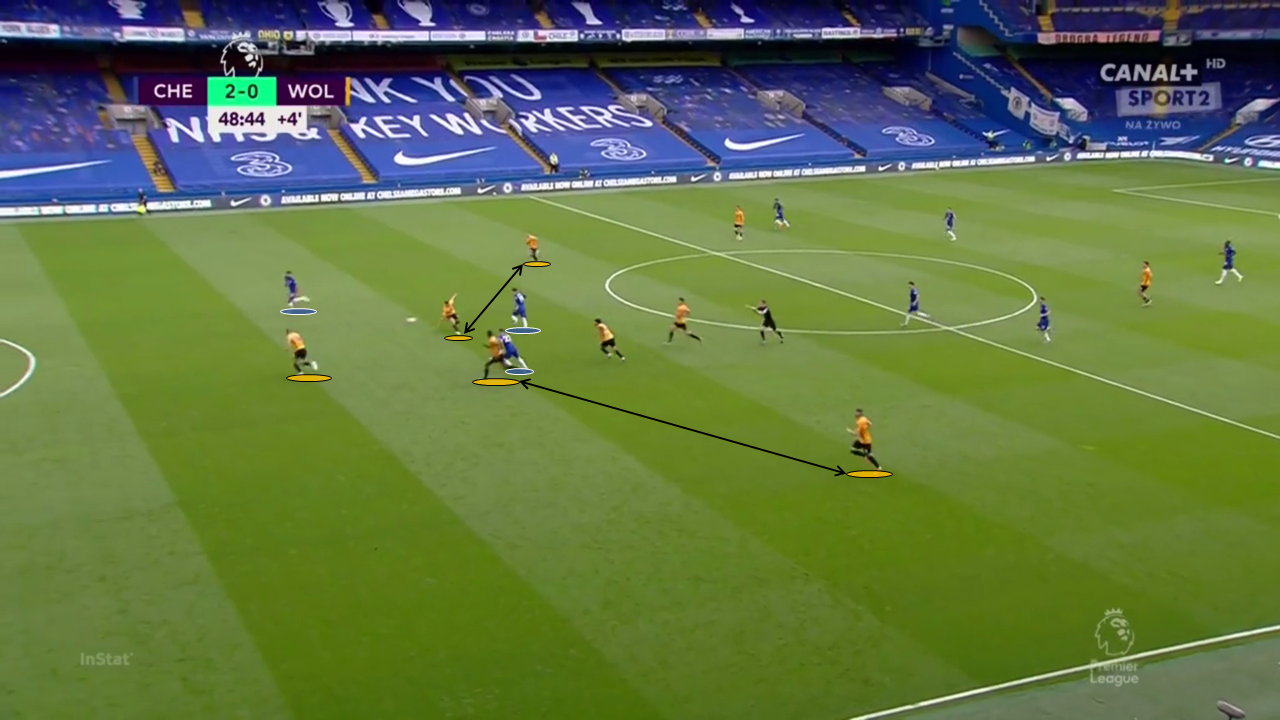 Further analysis also shows that not only did Chelsea’s tactics down the wings help them start attacks from there, it also allowed them to create effective attacks through the middle. After a consistent period of wing play, the Blues would often try a quick attack through the centre with the hope of attacking the Wolves centre-backs. The three forwards played close to each other and since the previous attacks had been down the wings, the Wolves wing-backs were more spread out than they were initially. Hence, a well-worked move would see the Chelsea forwards take on the Wolves centre-backs and though these tactics did not work initially, it led to the second goal scored by Giroud. Chelsea had effectively alternated between their tactics and the compact Wolves defence was bypassed with ease.

Wolves look to fight back 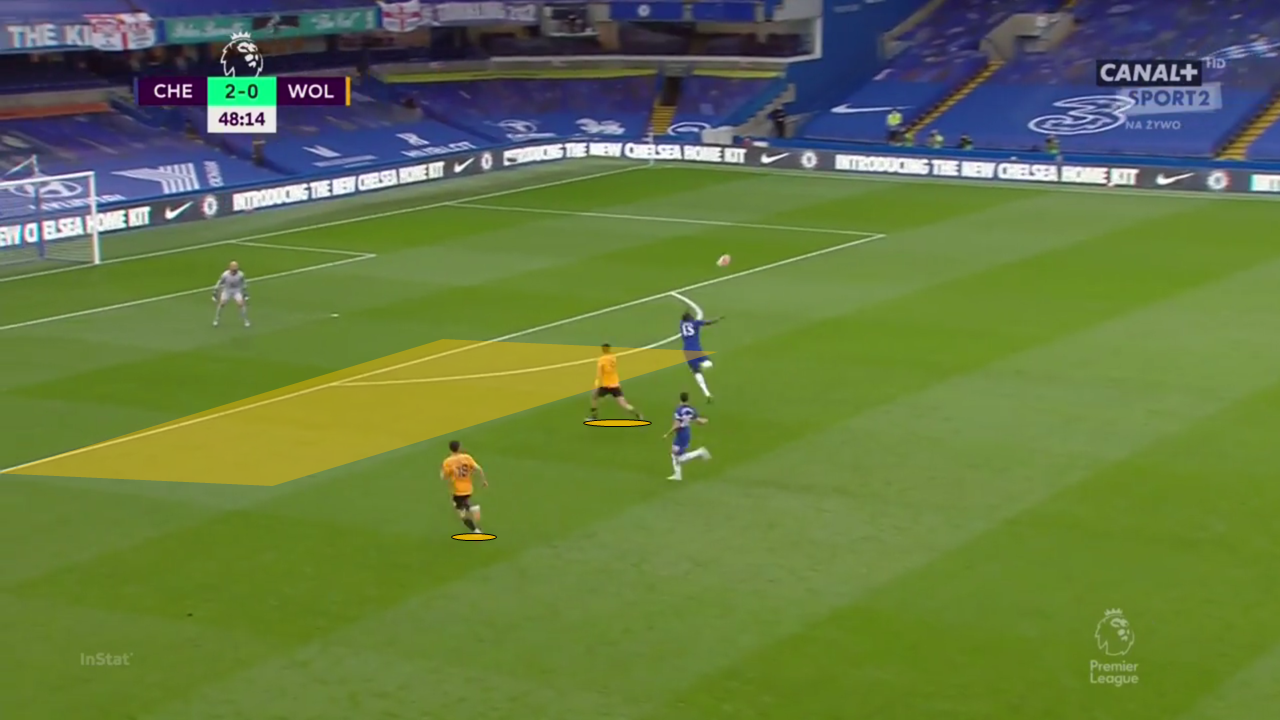 With Chelsea now two goals up and in the driver’s seat, the onus was on Wolves to get themselves back into the game. Traoré came on at half-time and his pace and skill made an immediate impact. The Chelsea defenders could not afford to leave as much space between them for him to exploit and this change in Wolves’ tactics made for an unsteady Chelsea defence in the early stages of the second half. The long balls to release the forwards were much more effective as the defence took some time to sort itself out and as shown above, the Wolves forwards found themselves in excellent positions. 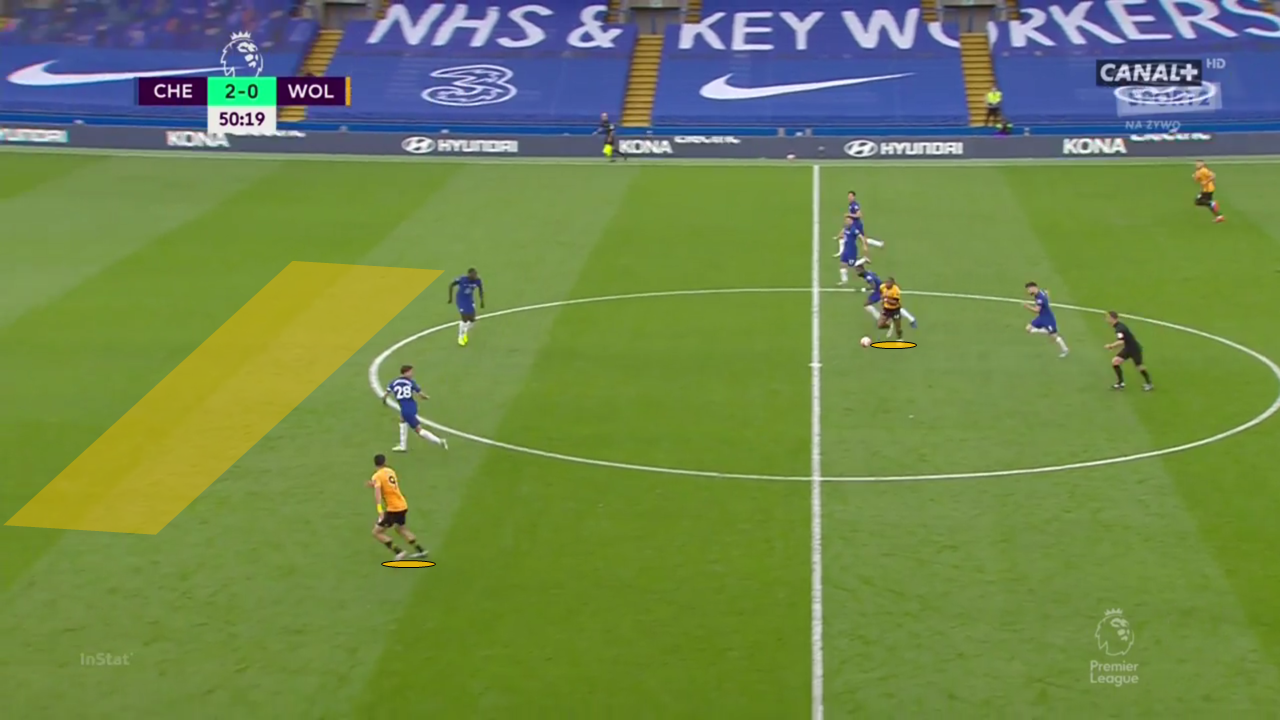 With the introduction of Traoré and also Moutinho later on, Wolves also had the freedom to alternate from their long-ball tactics to dribble up the pitch as well. Traoré’s pace has terrorised defences all season and it was no different in this fixture as he was often able to take on defenders and beat them. His ability to draw defenders towards him also meant that spaces opened up for the other forwards as shown above. This meant that Chelsea had to change their tactics and could not maintain their high line as they had previously. They were awarding Wolves too much space which they were able to exploit, although they could not come up with good enough chances at the end of it. 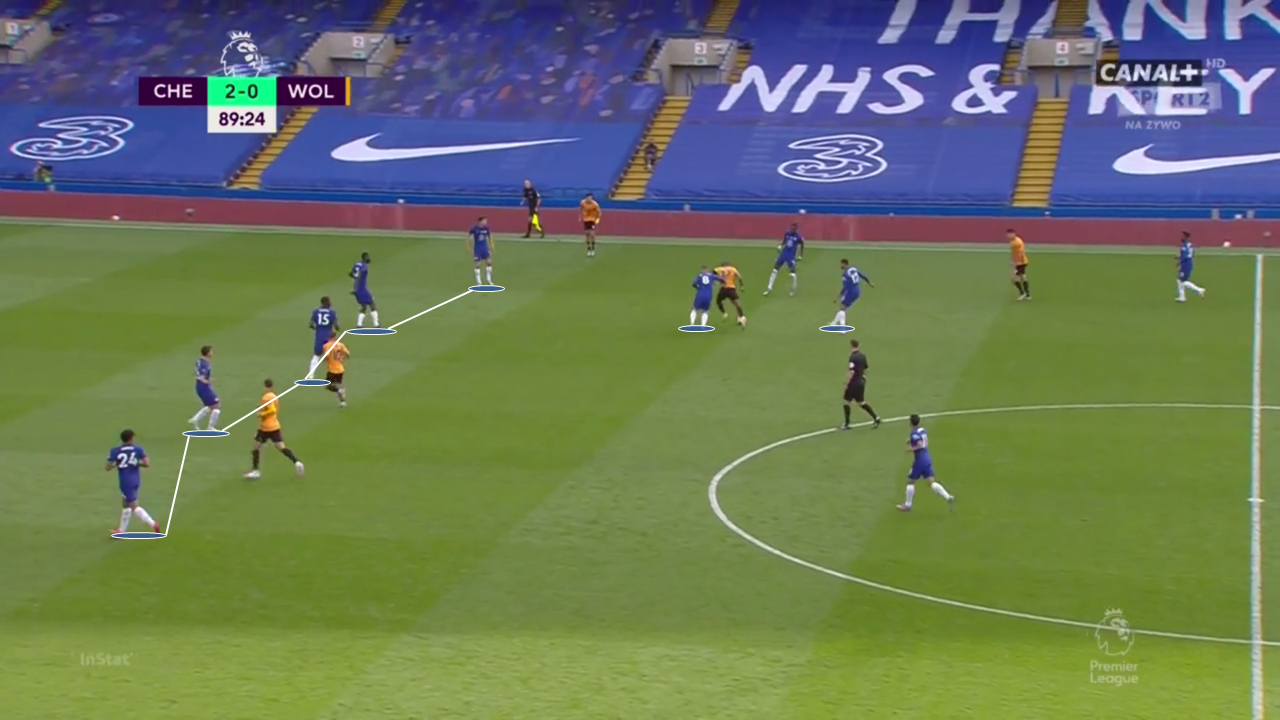 Eventually, Chelsea managed to regain their defensive structure and moving to a flat back five in defence. They still looked to score the third goal but it was not as aggressive an approach as they had taken earlier and they were content with utilising the space they had rather than looking to create something special. Their settled structure at the back also prevented Wolves from clawing their way back into the game and most of their attack being pushed to the wing where it was later snuffed out. It seemed highly unlikely for Wolves to get a goal back and Chelsea managed to smartly see out the rest of the game.

Chelsea’s victory meant that they had finished fourth behind Manchester United, who won at Leicester and sealed a spot in next season’s Champions League. Lampard’s side had looked to have firmly secured a spot earlier in the season but an inconsistent run of form meant that it had come down to the last day, something that they would not altogether be happy about. Things look bright for the London outfit though, with key signings of Timo Werner and Hakim Ziyech joining next season and the Blues would be looking to make the most of the next season.

Wolves’ loss, however, meant that they were now in seventh place after Tottenham drew to Crystal Palace. Their dreams of playing in Europe were not yet over though, with the club still in this season’s Europa League and would qualify for the same competition should Chelsea beat Arsenal in the FA Cup final. Santo had once again performed admirably with his team and although they could not match up to the finish that they had last year, it still was a good season for the Wolves who have surely been a formidable opponent in the Premier League.